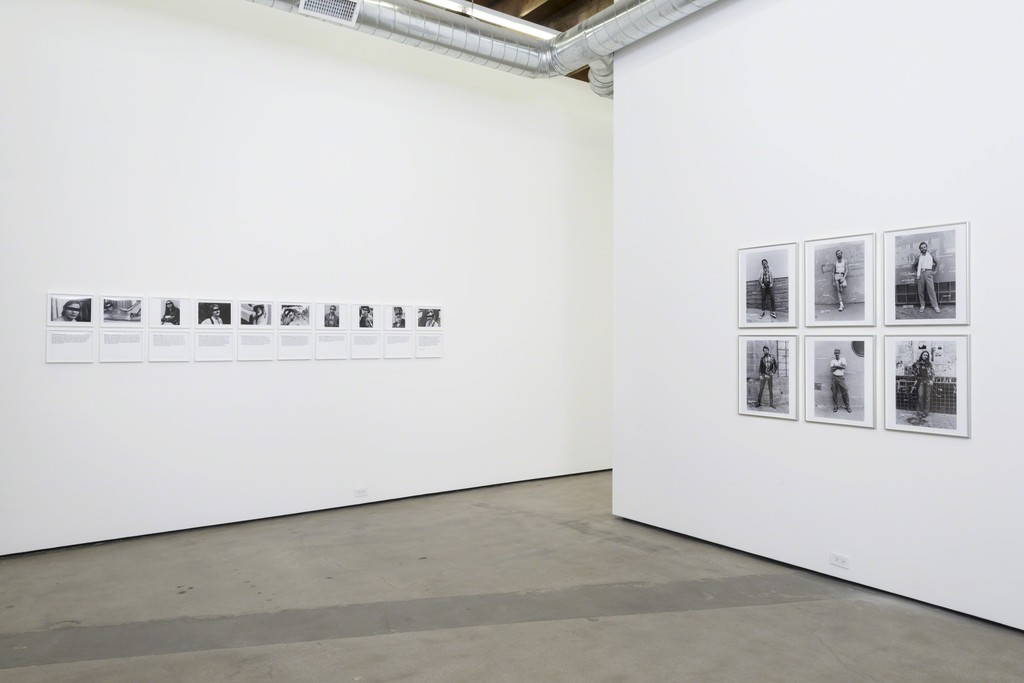 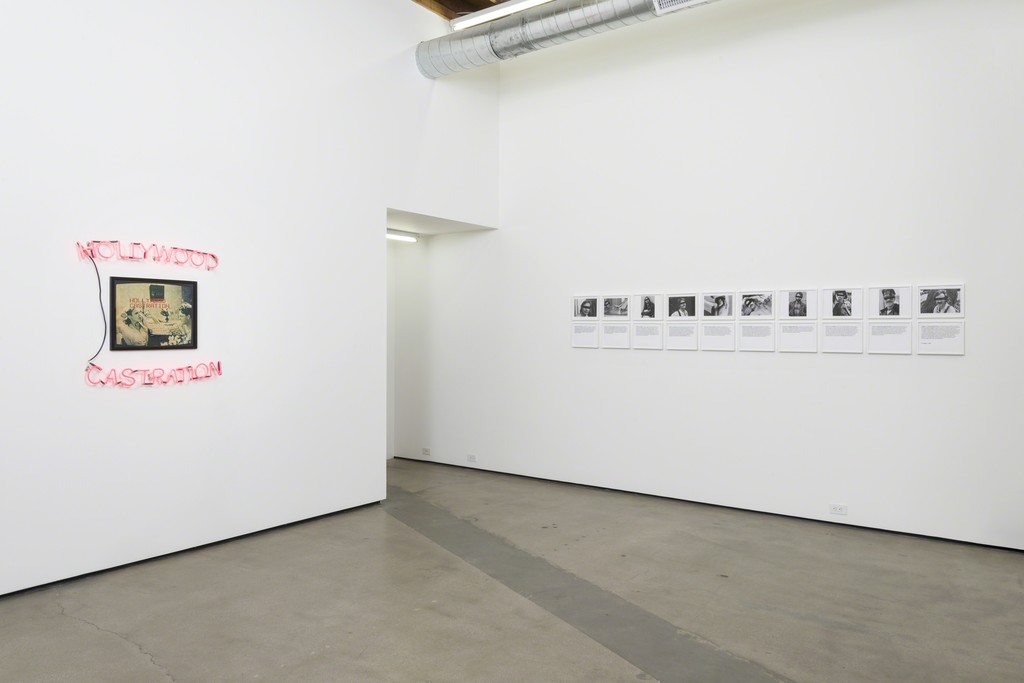 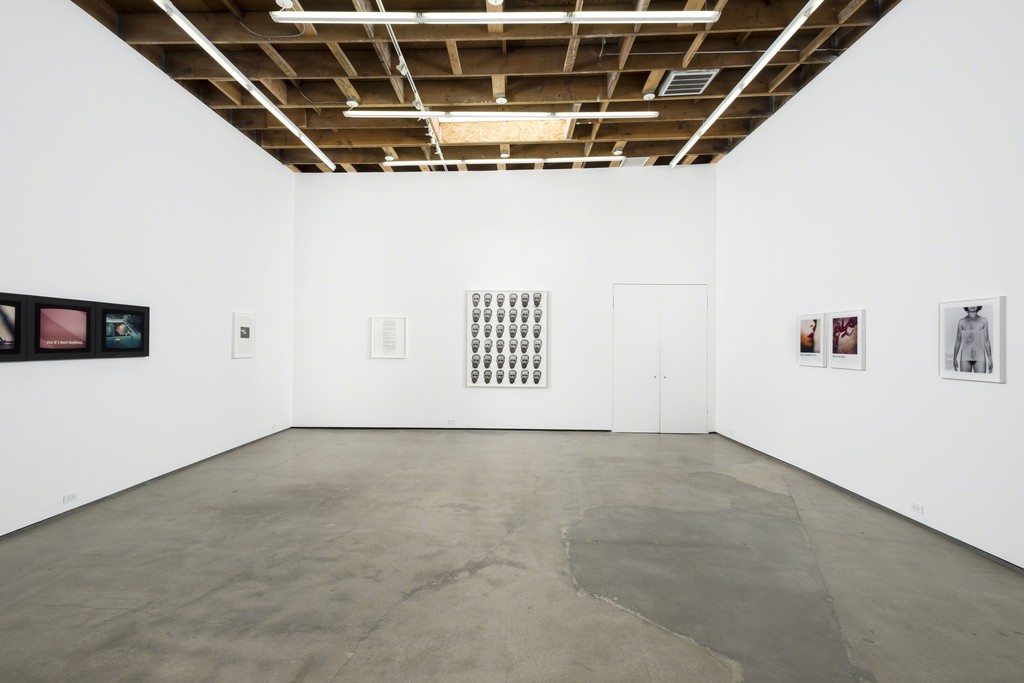 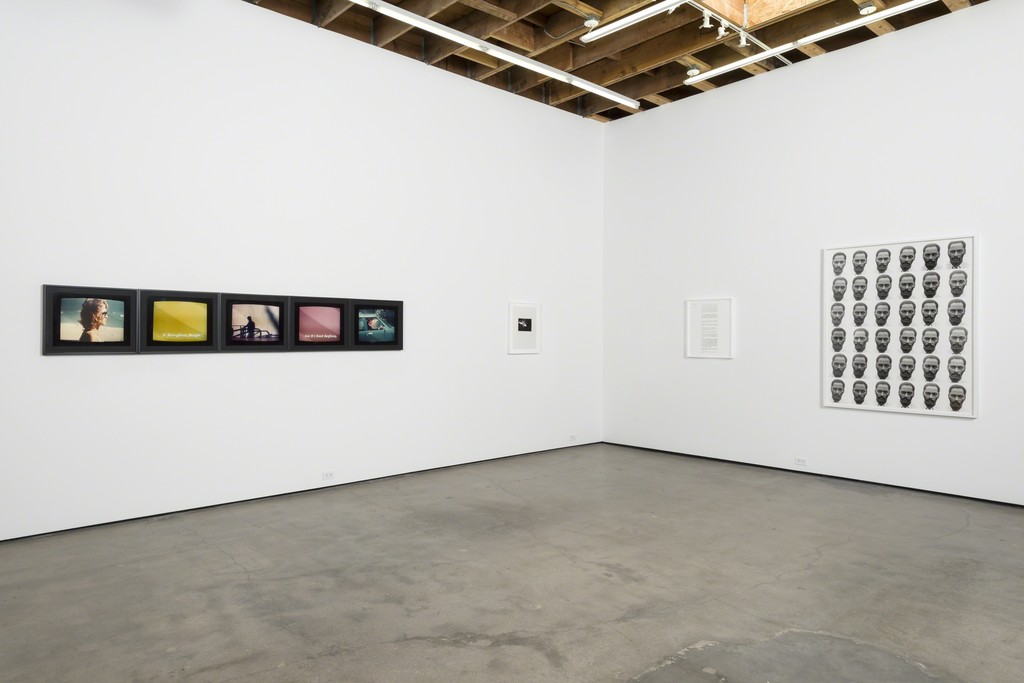 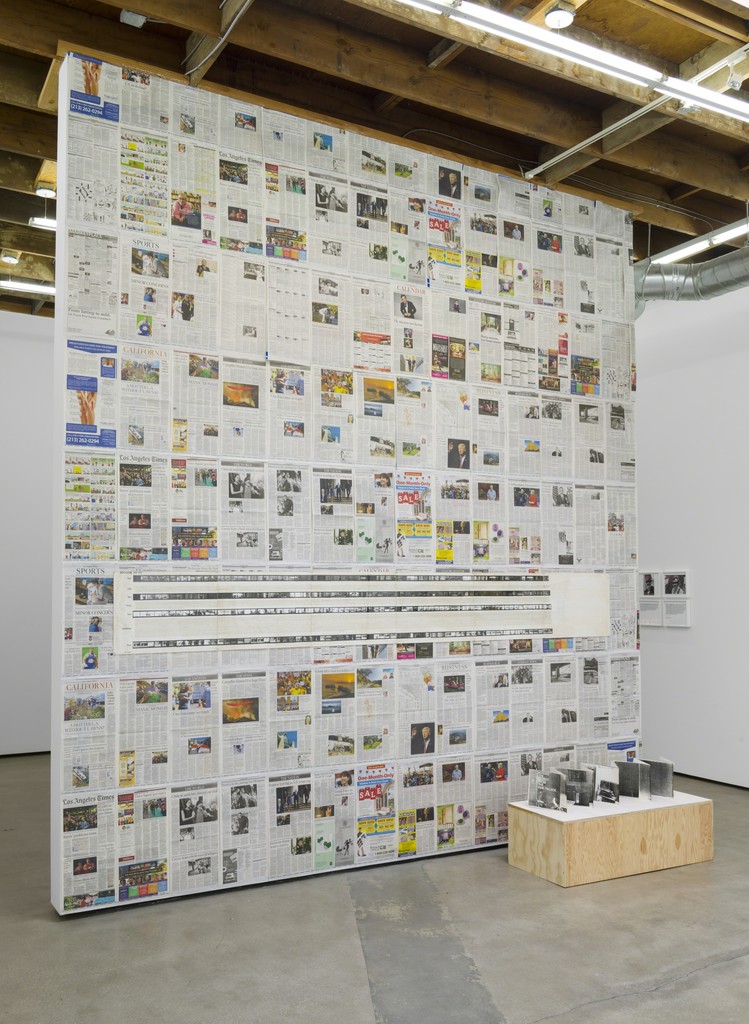 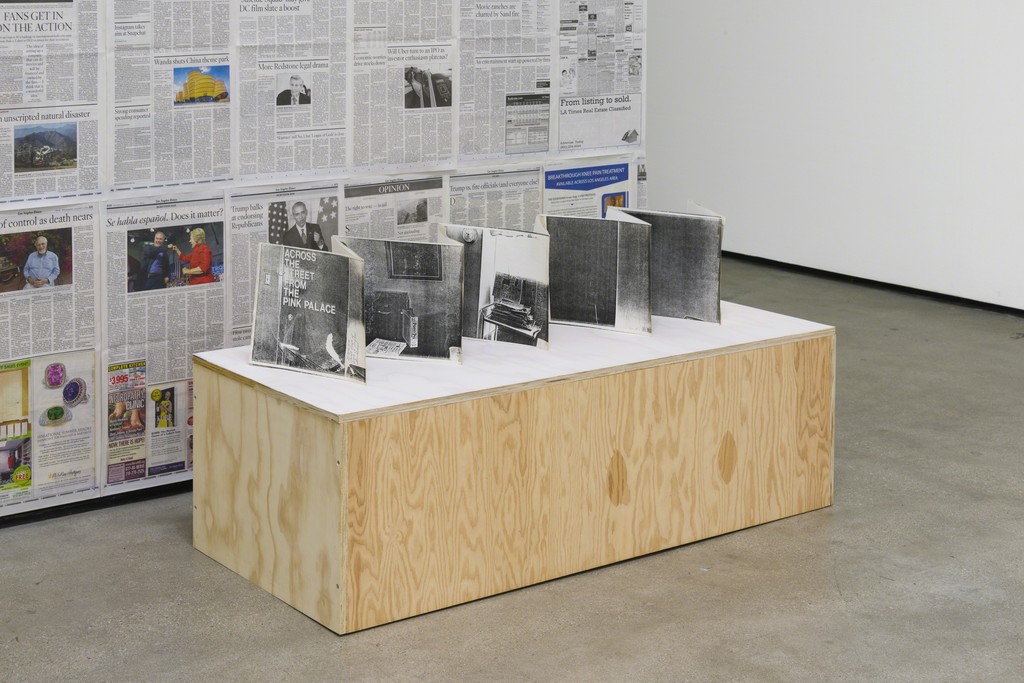 While it cannot be considered a movement, "Photography and Language" certainly can be described as representing one of the most fascinating, yet overlooked, critical moments in West Coast conceptual art history. Vital and startling works produced by Thomas, Phillips, d’Agostino and Fischer are as fresh today as they were when they were made almost 40 years ago. Works by these four artists ask questions about individual subjectivity and its relation to the workings of mass media; at the same time, they interrogate the definition of the art object itself, how these objects work, and how they are constructed. To our contemporary eyes, Thomas, Phillips, d’Agostino and Fischer present intriguing complications to the accepted timeline of conceptual art as we know it, and at the same time complement our understanding of the evolution of trends later mainstreamed in 1980s art-making across the US and Europe.

“Photography and Language” can also be used to describe the activities of a number of other artists working in the Bay Area at this time. These artists were brought together as a group when San Francisco Museum of Modern Art curator Van Deren Coke invited Lew Thomas to curate a show about “Photography and Language” and the activities of NFS Press. In addition to NFS publications and artworks by Phillips, d’Agostino and Fischer, the “Photographs and Words” exhibition at SFMOMA included installations by Lutz Bacher, Meyer Hirsch, Al Nodal and Sam Samore (who wrote part of the text printed on the face of Lew Thomas’s piece in the Cherry and Martin show). The SFMOMA exhibition catalog for “Photographs and Words” consisted of 7-pages camouflaged in the advertising pages of Artforum’s 1981 summer issue; this act reiterated, in a sense, the unfixed, ephemeral, dispersal-oriented attitude of the individuals associated with the “Photography and Language” scene.

The Role of Lew Thomas

The difference of course was that Thomas, who self-identified as a photographer, had a solid working knowledge of art theory and philosophy. This placed Thomas in a unique and frustrating position as there was not a broad understanding or even acceptance of photographers who were working conceptually within the photo community. Furthermore, because photography was still seen as separate from ‘fine art,’ the art world was not rushing forward to embrace photographers grounded in conceptual practice.

Lew Thomas can also be credited for introducing French structuralism to the scene, which played a major role in helping to identify the theme of "Photography and Language" with the 1976 exhibition and book. In fact, the constructed nature of images is vitally important to understanding word and image in the works by the artists involved with "Photography and Language". It should be pointed out that their position is of even more interest to us today: in our post-Internet age, image-consumers are empowered and freewheeling image-producers. But what is missing perhaps is a sense of criticality with regard to how word, image and media shape us individually as both masters and servants of the 21st-century mediated world.

NFS Press books were national and international in scope and audience. They provided opportunities and points of connection for artists who considered their work to be at intersections of photography and language, engaged in a dialogue of word and image. The NFS titles “Photography and Language” (1976), “Eros and Photography” (1977), co-edited by Thomas and Phillips, and “Still Photography: The Problematic Model” (1981), co-edited by Thomas and d’Agostino, sought to promote an open platform to the diverse vantage points of conceptual artists and conceptual photographers alike, each of whom worked with photographs for their own reasons: Dennis Adams, John Baldessari, Ellen Brooks, Jack Butler, JoAnn Callis, Robert Cumming, Jan Dibbets, John Gutmann, Robert Heinecken, Douglas Huebler, Steve Kahn, Barbara Kruger, Fred Lonidier, Mike Mandel and Larry Sultan, Muntadas, Bart Parker, Joyce Neimanas, Allan Sekula, Cindy Sherman and many others.

Works in the exhibition (a selection)

Lew THOMAS’s major installation, “Deposition” (1974-76), consists of 6 17 x 22 inch wall panels comprised of typed text and photographs accompanied by an audio soundtrack. The panels are presented on a field of contemporary newspapers that cover the wall and are chosen anew for each new installation. “Deposition” depicts an aging man at the height of the media frenzy surrounding San Francisco’s mid-70s Zebra killings. Barricaded in his apartment, fearful to leave, Lew Thomas’s protagonist is the subject of a social pathology. He claims that “his life and property [are] in constant jeopardy.” Thomas comments that this protagonist’s landscape “abounds with intuitions of disaster from evidence that is spoken, written, and/or pictorialized.” In describing this work, Thomas writes, “the term, deposition (written testimony used in the place of the witness), is perfectly suited to the method and construction of the work.” “Written material now became a means to parallel the visual tracks in a kind of confusion of texts.” The elongated sentences that make up the artwork - more than 100 inches long each - force the viewer to act as a kind of “human movie camera if they wish to follow a pattern of linear communication.” (Deposition text, 1976).

Produced during a residency at Los Angeles’s LAICA in 1980, Peter D’AGOSTINO’s “Suburban Strategies: LA (Century City) ” consists of his staged video movie and still photographs that portray “two characters, a man and a woman, depicted in tableau settings on the freeway, at the beach and through TV surveillance monitors at the ABC Entertainment Center. Functioning like a continually changing TV dial, with interruptions and fragments of information, “LA (Century City)” reflects aspects of television as a form of social surveillance, where the act of watching and being watched is a common experience of everyday life.” (LAICA Newsletter, December 1980). Appropriating B movie tropes employed by Godard, others in the New Wave and a host of Indie directors that followed, d’Agostino’s “LA (Century City)” and his earlier photo-text-video projects address some primary concerns of 1970s and 80s art theory and practice, notably semiotics and deconstruction.

Donna-Lee PHILLIPS 13-part “Anatomical Insights: The Abdomen” (1978), a selection of which will appear in the Cherry and Martin exhibition, superimposes the illustration and text of a medical (text) book over images of Phillips’s own nude body. These illustrations and texts become parallel narratives to that of the photographs themselves, with each narrative providing its own vantage point for interpretation. The straightforward presentation of these three narratives, combined with organized set of combinations allows the reading of the work to move forward with a machine-like continuity. Phillips’s “What Do I Mean When I Say Red? What do You Mean?” (1980) presents two images of the artist’s lips and shoes - interrogating both viewer and maker in a give-and-take of intentions.

Hal FISCHER’s “Boy-Friends” (1979) describes ten carnal encounters through the pairing of a 'censored' (imprinted black band over the eyes) snapshot-like photograph and parallel text, the latter printed as a separate photo. The text leads the viewer to assume that the unnamed party to these couplings is the artist himself, and that these encounters occurred in the recent past. There is a feeling of profound personal connection and humor in these works. Lew Thomas writes that it is Fischer’s intention to reaffirm the presence of people and the issues of content as central to the practice of photography; however, at the same time, Thomas comments that the structure of works like “Boy-Friends” adhere to a methodical process “where the structure of ‘making equal,’ subject and object, dissolves the distinction between language and photography.” Thomas goes on to write that, “The strategy of plural voices allows Fischer to break out of the enclosure of interpretation that dissimulates form, format, classification in an exchange of views where the photographer is no longer problematic to the appropriating power of photography” [“The New Commercialist (A Review)],” (1978)

Biographies of the Artists

Donna-Lee PHILLIPS’s 13-part “Anatomical Insights: The Abdomen” (1978) currently appears in “Collected,” an exhibition at San Francisco’s Pier 24 that brings together photographs from the Pilara Foundation and other San Francisco Bay Area collections. Phillips has had solo exhibitions at the Fine Arts Museums of San Francisco and Santa Barbara Museum of Art. Important group exhibitions that featured her work include “Attitudes: Photography in the 70s,” (Santa Barbara, CA, 1979), and the international traveling exhibition “Photography in California: 1945-80,” organized by the San Francisco Museum of Modern Art. Phillips’ work is featured in “Photography and the American Imagination (Harry N. Abrams, 1983) and has been reviewed in numerous publications, including Artweek and Artforum.