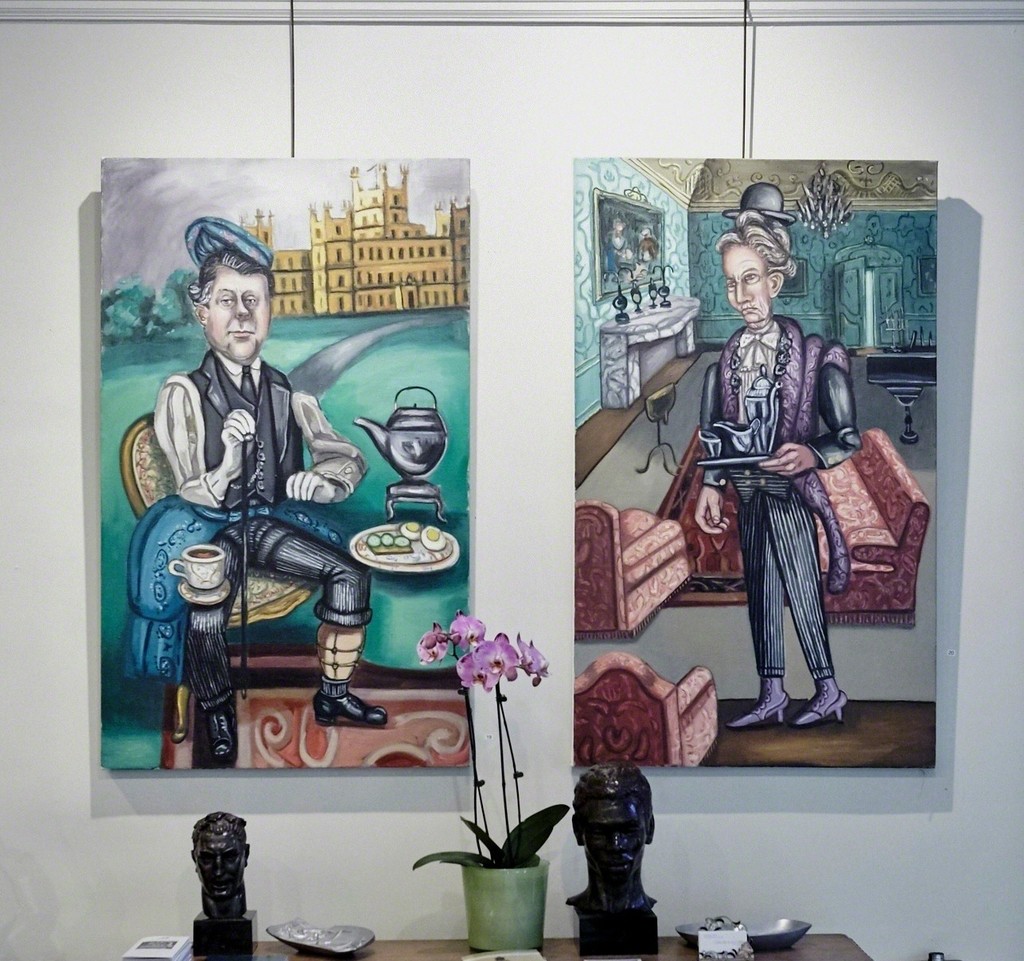 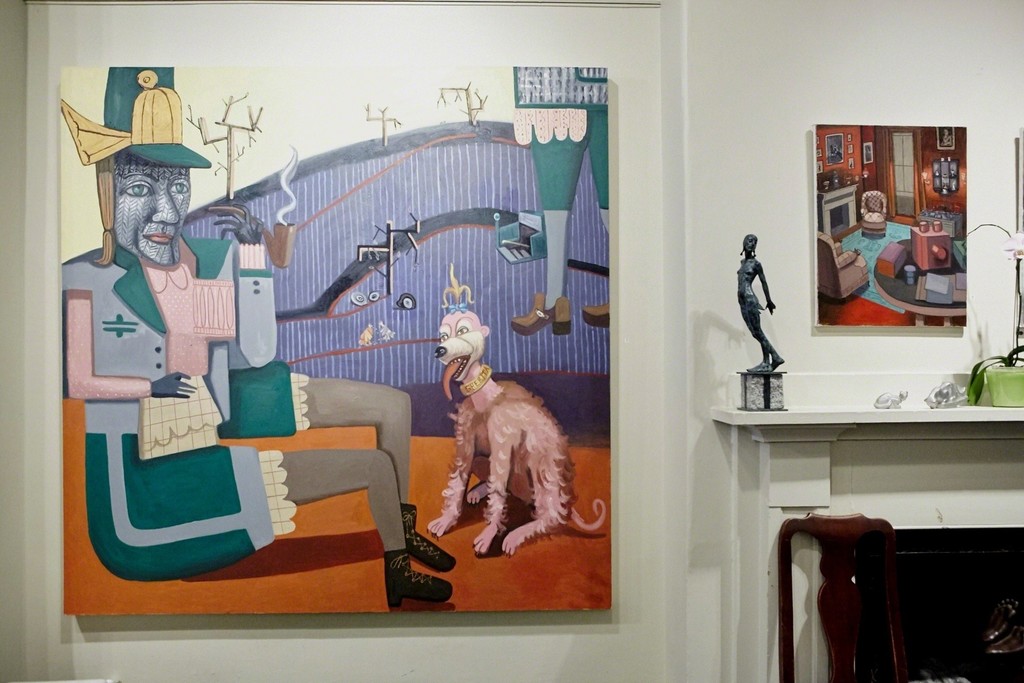 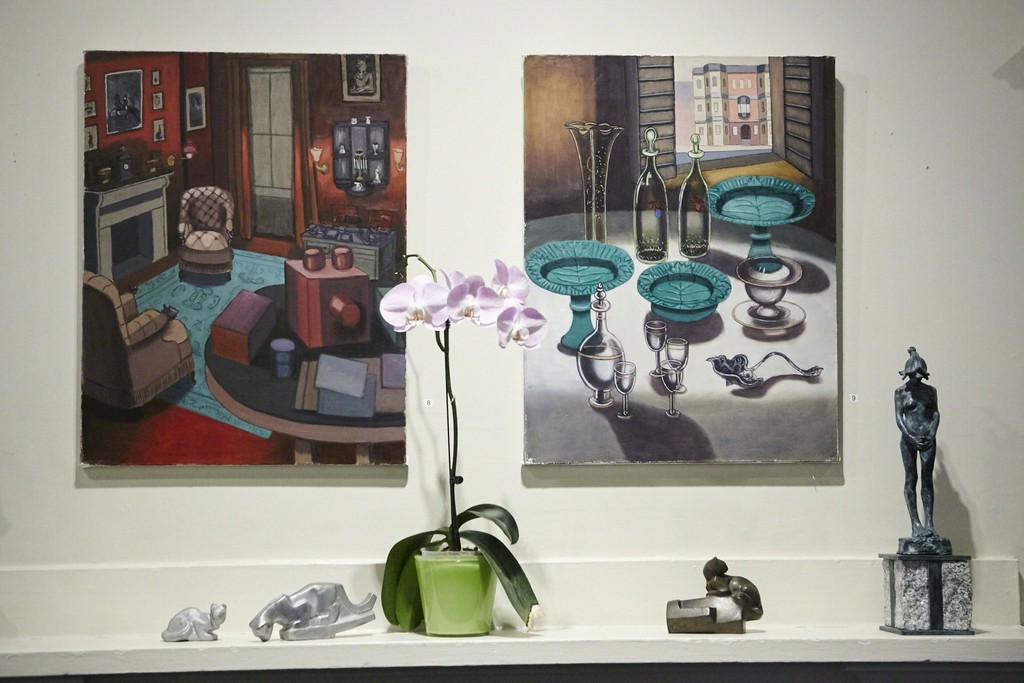 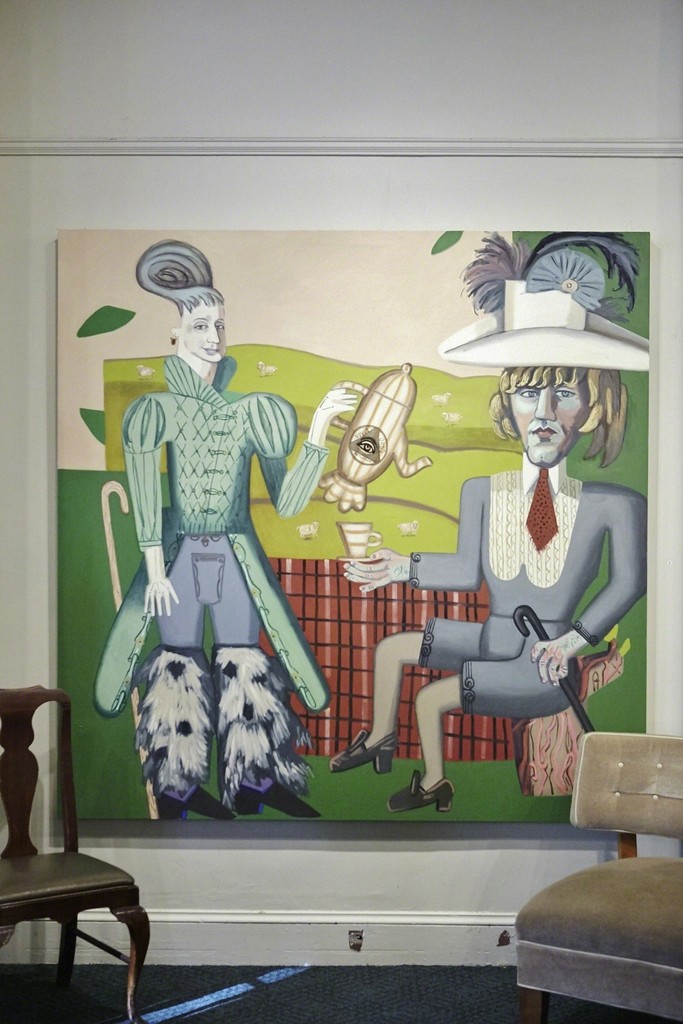 Hannah Barrett’s paintings imagine a colorful, absurdist world inhabited by eccentrics of ambiguous genders and time periods. As they sip tea in alpine drag, the characters of her Imaginarium play at perceived etiquettes and gender norms. With tongue-in-cheek nods to the past, Barrett combines dichotomous oddities to create a whimsical atmosphere that is familiar and foreign, modern and retro, unsettling yet charming.

Drawing on works from the Rustics, Hunters’ Picnic, and The Secret Society series, Imaginarium brings together portraits and still lifes that share common themes but distinct changes in style. The intricacy and tonal focus of the black and white portraits from the oldest series, The Secret Society give way to the bolder, more colorful Tales of the House of Gibson and Hunters’ Picnic, culminating in the recent larger-than-life scale of Fall Hunters and Summer Shepherds. The still lifes also reflect subtle changes in the artist’s point of view from the formal rendering of Green Glass to the spatial flattening of Sinister Ham.

Pattern runs rampant throughout Barrett’s work; stripes, plaids, checks, and polka dots all provide visual interest and suggest authenticity. Yet, the eclectic deployment of pattern creates contradictions. In Fall Hunters, herringbone tweed, a fabric traditionally associated with autumnal outerwear decorates the face of the hunter rather than his-her coat. In The Secret Society, oversized features, non-traditional attire, and androgyny belie the subjects’ stately poses and expressions. The Imaginarium, a mini retrospective, presents a rare opportunity to experience double takes and layered viewing across Barrett’s oeuvre as a collective whole.

Hannah Barrett earned her BA at Wellesley College and subsequently studied painting at the School of the Museum of Fine Arts, Boston, School for Applied Arts in Vienna, Austria, and Boston University. She is currently Visiting Faculty at the SMFA and Adjunct Associate Professor at the Pratt Institute in Brooklyn, New York. Her work has been shown at the National Museum for Women in the Arts, Washington, DC, the Museum of Fine Arts, Boston, and the deCordova Museum and Sculpture Park, Lincoln, MA. She is the recipient of an Artadia Award and the Museum of Transgender Hirstory and Art’s Upcoming Artist of the Year Award, as well as travel fellowships from the SMFA and Wellesley College.

Hannah Barrett will attend the exhibition’s opening reception at Childs Gallery on Thursday, July 16th, between 6:00 and 8:00pm. The public is welcome to attend.