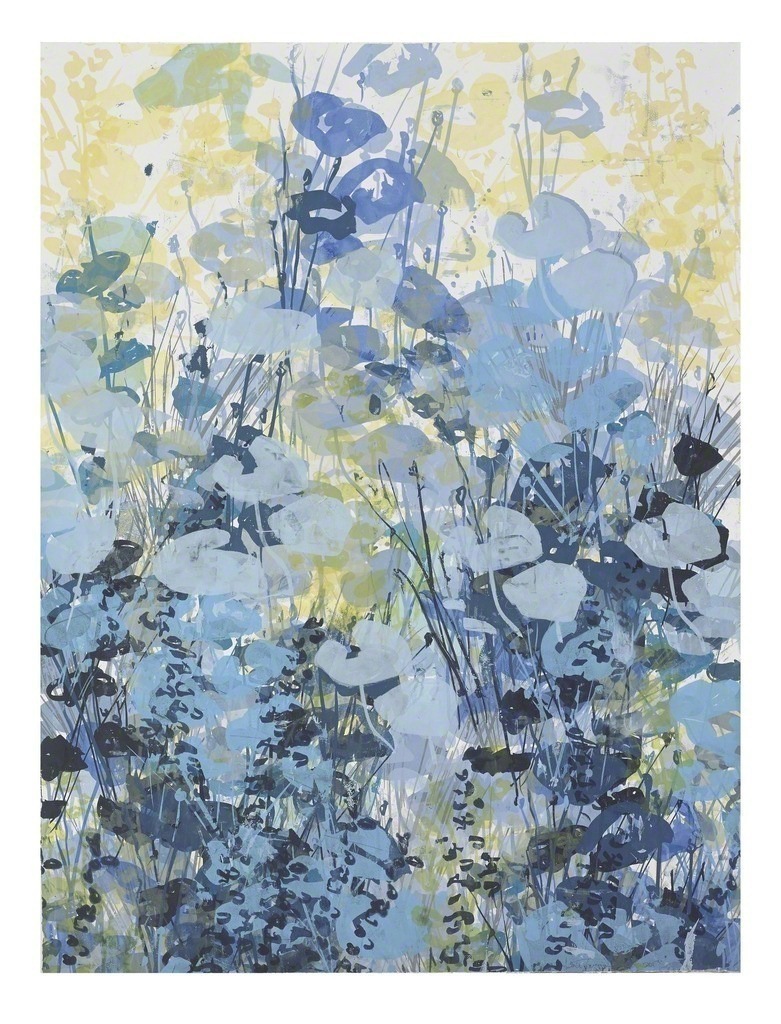 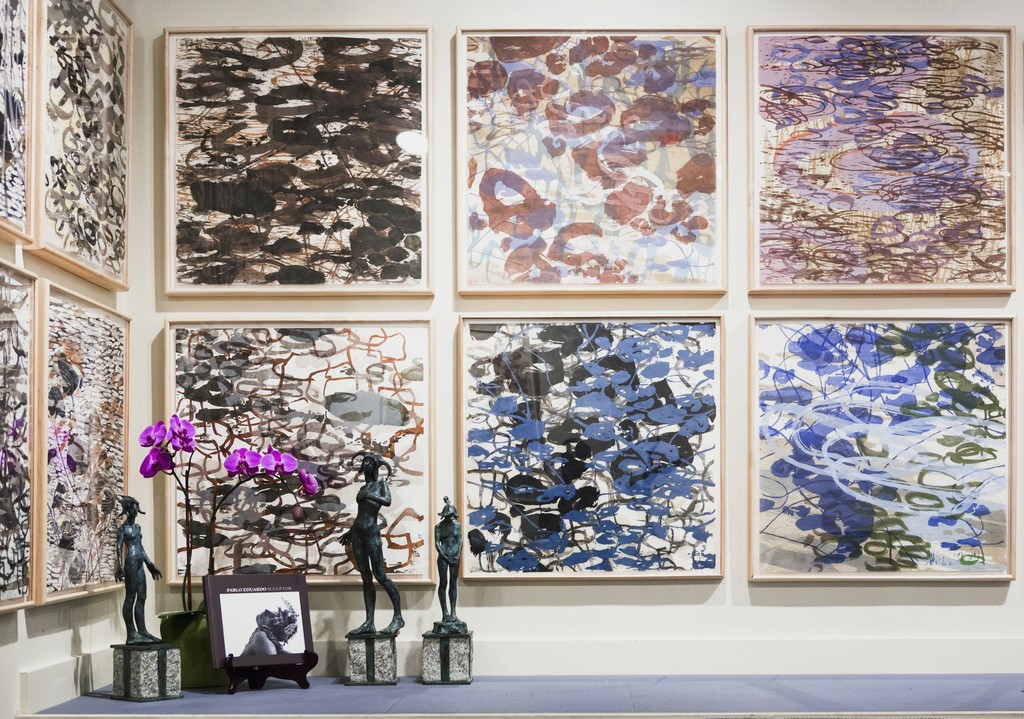 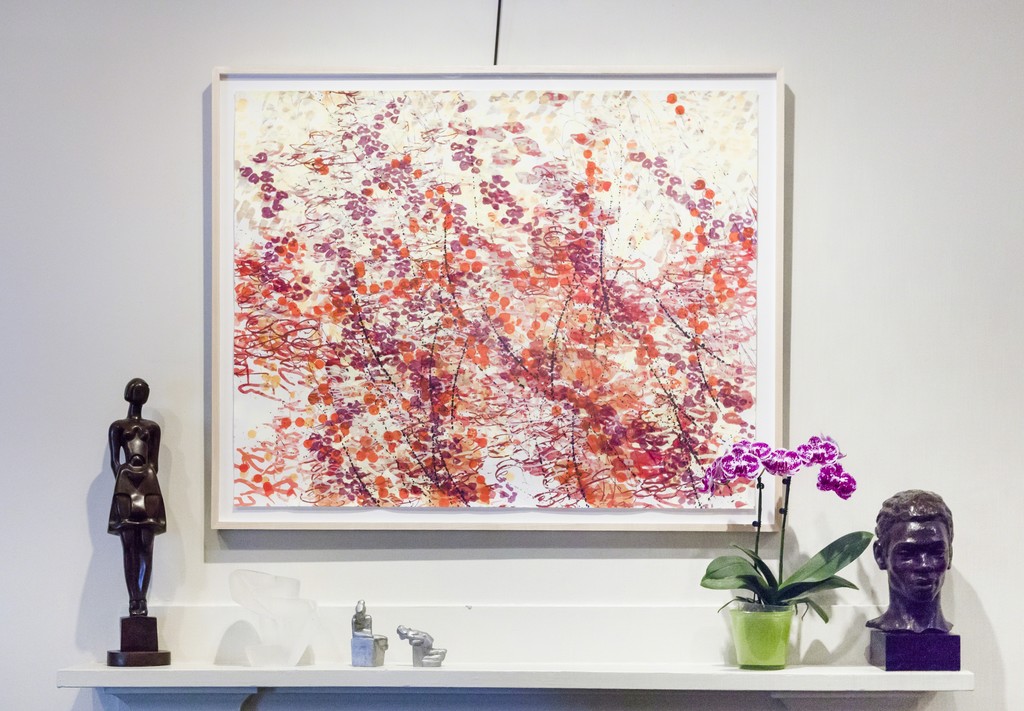 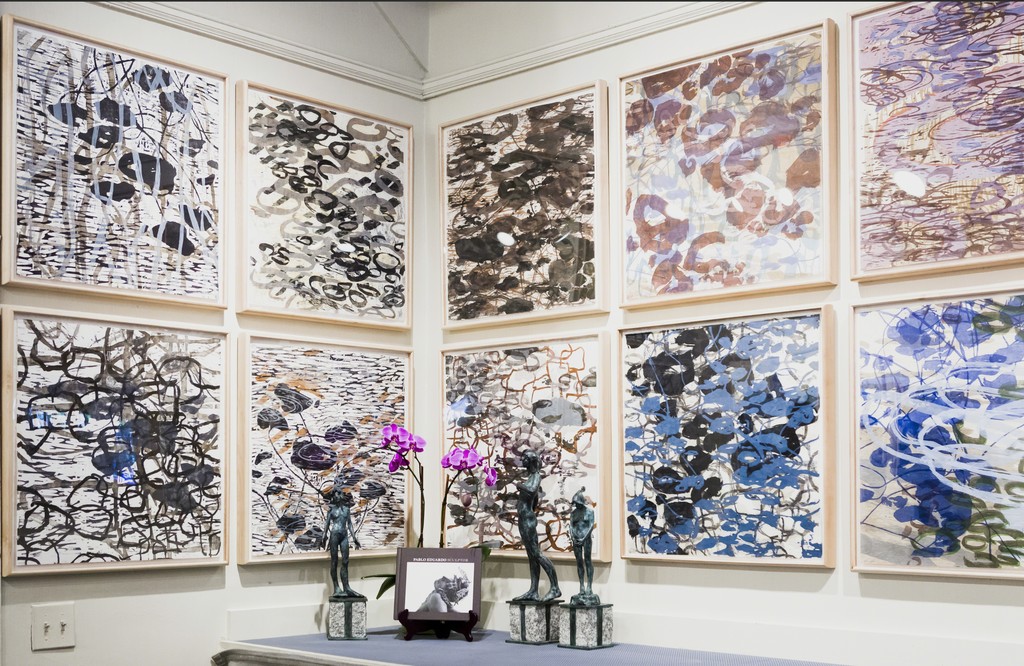 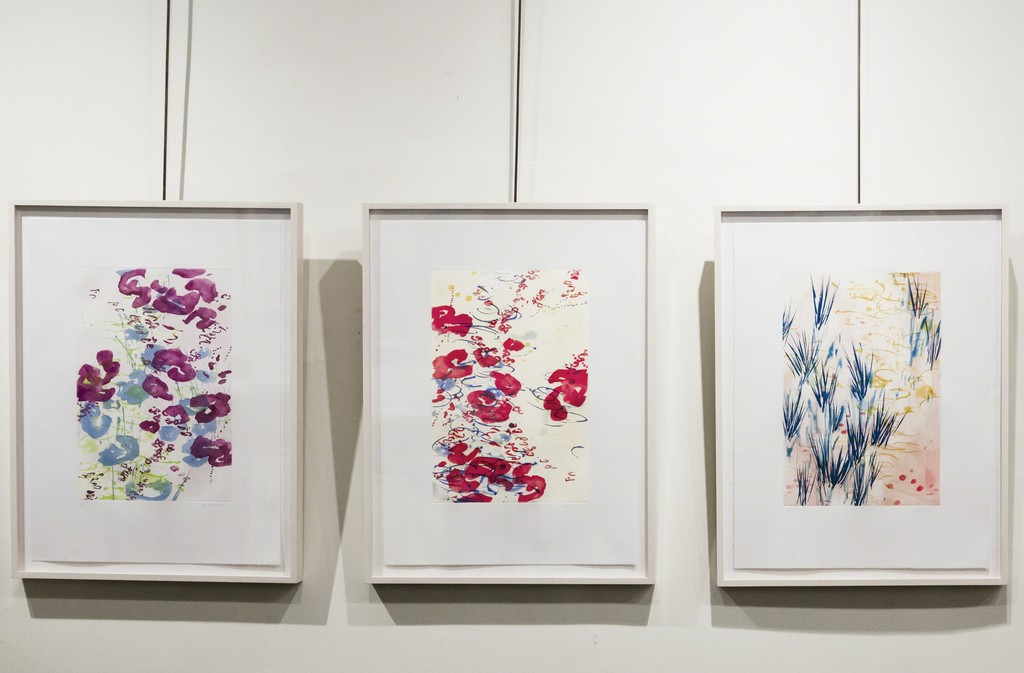 Childs Gallery is pleased to announce an upcoming exhibition of monoprints by artist John Thompson (American, b. 1950). Arriving just in time for summer, these refreshing images evoke the fleeting beauty of small moments in nature: the play of light on leafy branches, the rustle of wind through grass, the ripple of raindrops across a pond. Thompson uses multiple woodblocks and silkscreens to orchestrate his monoprints, carefully building and layering overlapping elements. Each monoprint is a unique work of art, a harmonious symphony of pattern, texture, color, and light.

Inspired by direct observation of the natural world, Thompson’s process begins with a series of sketches executed en plein air. He frequents the banks of several local rivers and ponds, collecting imagery from favorite spots like the Sudbury and Charles Rivers, and College Pond in Weston. Back in his studio, Thompson uses these sketches to develop the patterns and motifs that he will later transfer onto woodblocks and silkscreens for printing. His studio contains a virtual library of matrices, depicting everything from a few blades of grass to a flotilla of lily pads.

Thompson’s love of materials has led him to employ a combination of techniques – including woodblock printing, screen printing, intaglio methods, and freehand painting – in a single image. His printmaking process is a very physical one, entirely “reactive to the image itself”. He actively moves around the print as he turns a matrix first one way, then another, adding a dash of ink here, blotting something out over there, and gradually adding layer upon layer to build the composition. Thompson’s ever-expanding library of matrices provides him with an almost infinite array of possibilities. He returns to the same image day after day, using dozens of screens and blocks to create a single print.

While it is easy to overwork a composition in this manner, for Thompson, a willingness to experiment is paramount. “I never know what will come out,” Thompson says, “It’s very important to take risks, to incorporate the possibility of failure”. He is not afraid to push the limits of the image, to be “absolutely ruthless” and toss something out when necessary.
In the end, Thompson is searching for that moment when the image finally resolves itself – that point when all of the chaos comes together in a single moment of clarity. For Thompson, “Variations and constant change in the color, pattern, texture and light become opportunities for observing the fleeting beauty of the ordinary and the accidental, the common and the sacred.”

Thompson began his career as an artist later in life, first taking up printmaking in earnest 12 years ago. He has since founded and maintains a studio and print shop in the Lincoln Arts Building in Waltham, MA, as well as a painting studio in Washington, CT. Thompson holds degrees from Syracuse University (BFA), University of Wisconsin-Madison (MA), Babson College (MFA) and the Massachusetts College of Art and Design (MFA). He teaches printmaking at Massachusetts College of Art and Design, the Danforth Museum, and the Washington Art Association, and serves on the boards of several art and educational institutions.

His work is in numerous public and private collections throughout the United States and in locations internationally.

John Thompson will make a personal appearance at Childs Gallery on Thursday, June 26th between 6:00 and 8:00 PM for the exhibition’s opening reception. The public is welcome to attend.