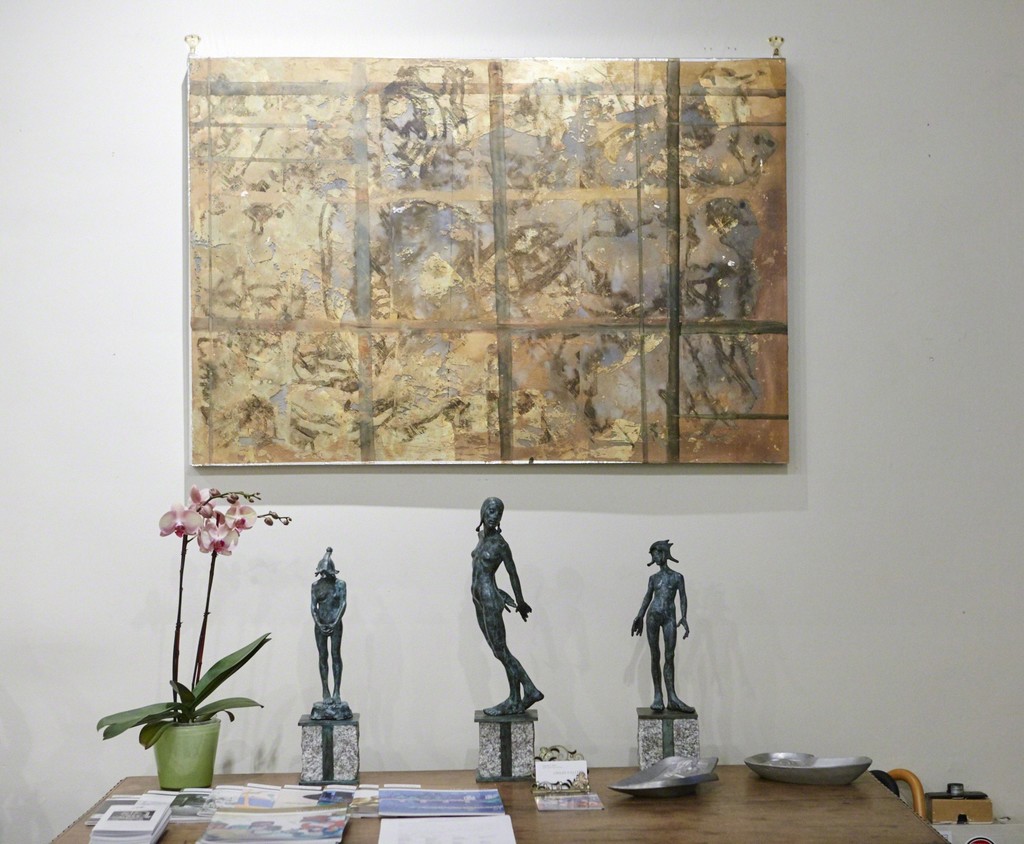 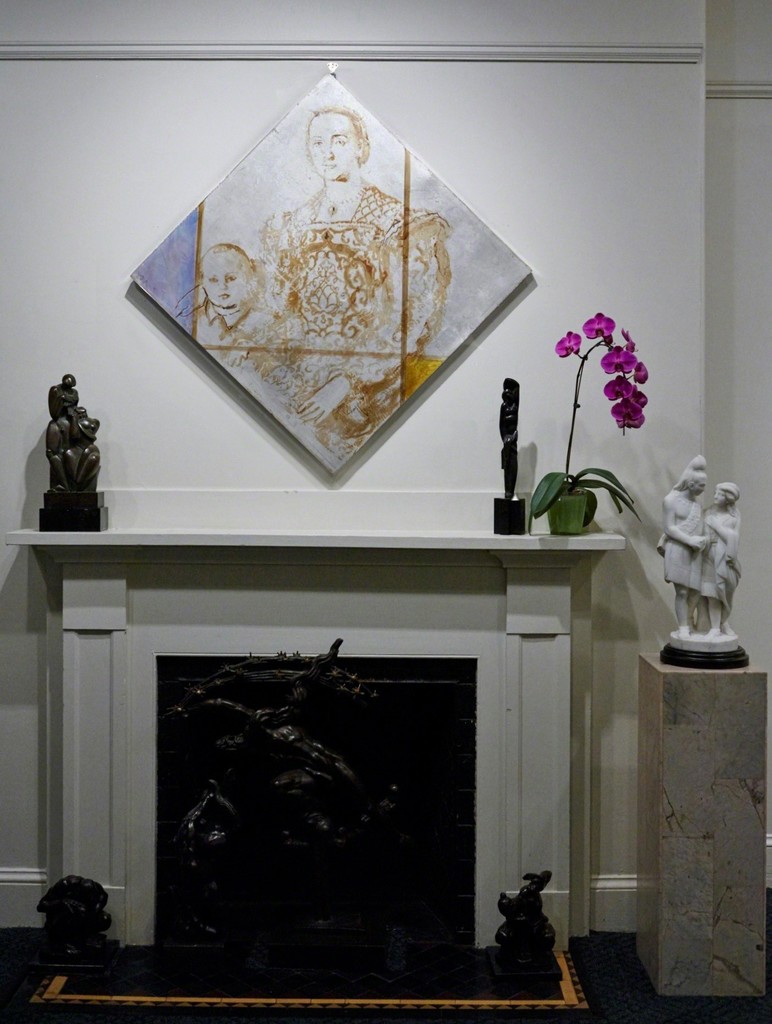 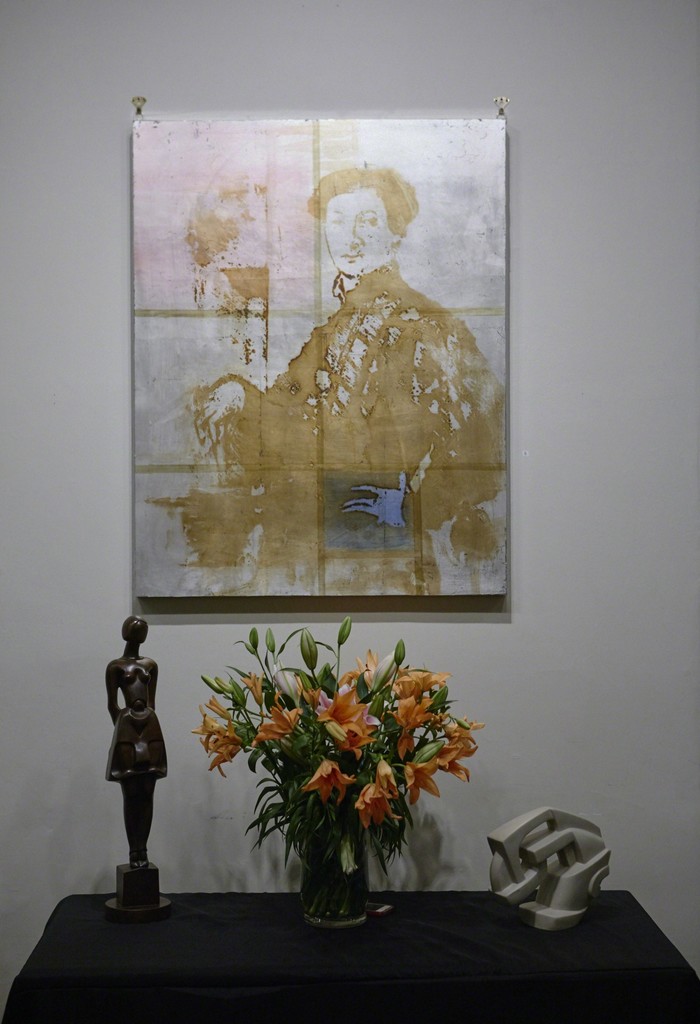 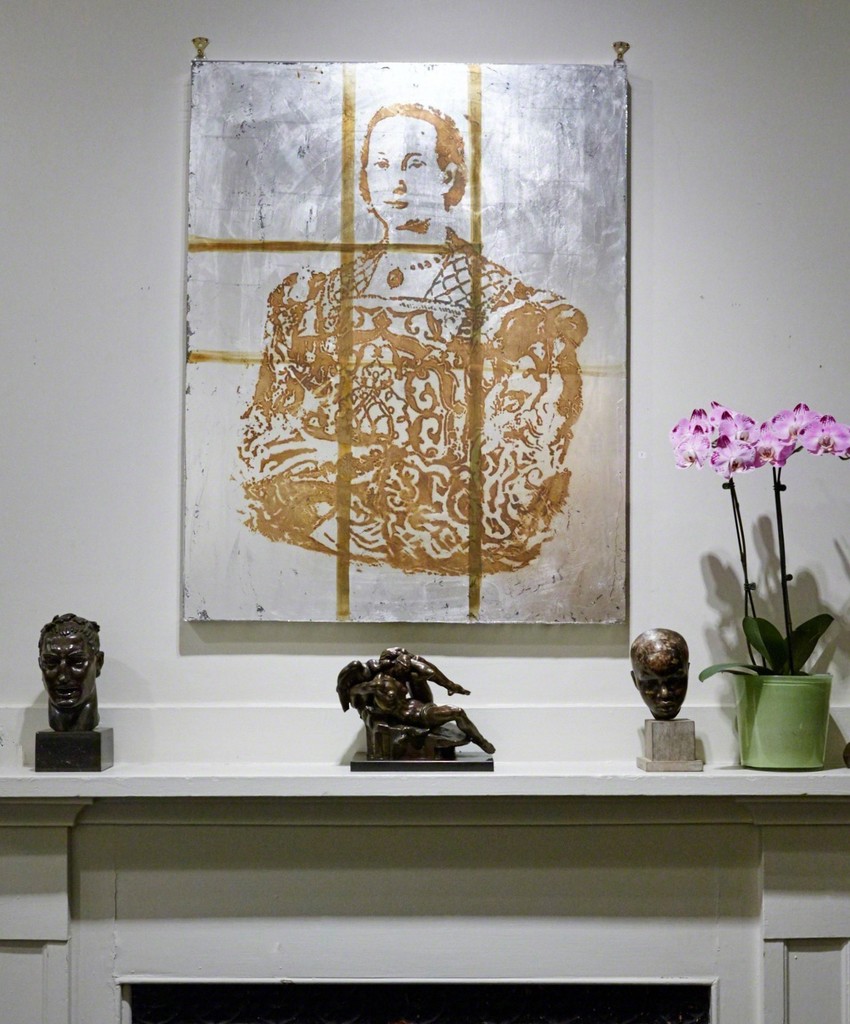 In the hands of award-winning artist Raphaël Jaimes-Branger,
the inventive pairing of Bronzino’s idealized portraits with Mondrian’s reductive abstractions inspires a hauntingly enigmatic body of work.

“When you see a painting, it’s not just a flat image. It’s a composite of the struggles, the processes, the mistakes,” says the Venezuelan-born artist Raphaël Jaimes-Branger. “It tells a story.”

Storytelling comes quite naturally to this École des Beaux-Arts graduate and respected teacher, who spent the last 10 years working on his mesmerizing “Bronzino to Mondrian” show. While marrying the styles of a quintessential Renaissance Mannerist and Modern 20th century minimalist is anything but obvious, it was actually a very logical progression for the classically trained, experimental artist. Celebrated for a whisper-thin acid-on-silver leaf technique of his own creation, Jaimes-Branger has always simultaneously looked backward and forward to magical effect.

Story number one: an infatuation with Agnolo Bronzino (1503-1572) that began on a childhood trip to Rome.

As Jaimes-Branger recalls, “We were visiting the Palazzo Colonna where they filmed Roman Holiday. Everyone was looking at the throne where Audrey Hepburn had sat in the movie when I caught sight of Bronzino’s oil painting of Venus. It was like lightning hit me! The elongated horizontal figure was icy cold, sculpted, and translucent. She was regal, simply out of this world. It was like a stained glass window with colors so vivid it could have been done yesterday. I couldn’t figure out how anyone could have painted it.”

While studying at the prestigious École des Beaux-Arts in Paris, Raphaël would be reintroduced to the transcendent Bronzino, as well as equally enthralling “painters’ painters” throughout history. Figures from the iconic works of Velasquez, Sargent, and Bronzino would later appear as ghostly, pentimento-like apparitions in Jaimes-Branger’s mystical silver leaf works - the images created not by paint, but rather the oxidation of metal.

That highly original technique was inspired by the words of another seminal painters’ painter and draftsman, Jean-Dominique Ingres (1755-1814). Beginning with the declaration “Le dessin est la probité de l’art,” Ingres’ famous pronouncement characterizes integrity as the heart and soul of drawing, defined not as the act of reproducing contours, but rather as a path to discovery. Taking those words to heart, Jaimes-Branger sought to find a technique as simple as a trace of graphite on paper, but with a humbling unpredictability.

Story number two: the hunt for idealized beauty in proportion and composition.

As a long-standing teacher of art techniques, Jaimes-Branger never stopped being a student himself. “Studying composition is the hardest thing at art school,” he says. “There are so many theories: rules of thirds, symmetry, color, and so on.” One theory that would become his obsession is the ancient Greek geometric formula called the Golden Section. Also known as the Golden Ratio, this complicated mathematical sequencing both explains - and helps one create - symmetrical compositions deemed most aesthetically pleasing to the eye. Echoing the inherent perfection of nature, the theorem was originally deemed “the divine proportion,” later used by Renaissance painters to achieve what they felt was a consummate beauty in their works. To better understand this idealized harmony in composition, Jaimes-Branger created his own plexiglass diagram of the Golden Section that he could place over his favorite paintings, like those of Bronzino.

“Classical training teaches you to begin with a grid,” says the now Boston-based artist, something he has been experimenting with his entire career. For example, when Jaimes-Branger breaks a single work into four separate panels, they are positioned exactly two inches apart for a very specific reason. “If you were to put all the squares flush together, they would not equal a single image,” he points out. “Those two inches are both visually and literally missing. I want the viewer’s brain to be forced to engage with the piece to fill in what’s missing. In a way, you become part of the painting. Mondrian is like that too. He moves you around the canvas.”

It’s not every youngster whose Godmother has an original Mondrian painting hanging on her wall. “My Aunt was extremely rich,” muses Jaimes-Branger. “She had a magnificent house in the mountains of Caracas designed by the famous Bauhaus architect Richard Neutra. It had huge, beautiful windows with floating pools that went from one floor to the next. It was very cold and rectilinear with an art collection to match. At the time, Mondrian didn’t speak to me, as I was more interested in swimming in one of the pools. I just thought it was art that went with the house.”

That assessment would change drastically when Jaimes-Branger began studying Mondrian’s archetypal compositions. “His progression was fascinating. He started painting landscapes and trees, their branch growth adhering to the Golden Section theory. Those evolved into breaking the tree down into mere line configurations until Mondrian finally reduced his canvases to the simplest of elements: horizontal and vertical lines, and the purity of black and white with accents of only primary colors.” But much like the works of Bronzino, one must look at the actual paintings to understand their power says Jaimes-Branger.

And that brings us full circle to Jaimes-Branger’s original quote: “When you see a painting, it’s not just a flat image. It’s a composite of the struggles, the processes, the mistakes. It tells a story.”

The artist’s own struggles with mastering composition led to his “eureka moment” in pairing Bronzino with Mondrian. “Bronzino clearly started with a grid when you see his drawings, so I positioned the Mondrians over them to better understand the sense of space and how the elements relate to each other. They ended up in a dialogue I wasn’t expecting and taught me that what makes something so beautiful and harmonious cannot be explained in a single mathematical formula. Work speaks to you as you progress. Things come out of nowhere that you didn’t originally plan.”

Mondrian’s compositions have also been reduced to their bare minimum, with the fewest of bold lines putting Bronzino’s figures at an even further distance, as if trapped behind an impenetrable barred window. They can’t get out. You can’t get in. Adding to this illusion are small geometric inserts of primary colors, not opaque like Mondrian’s, but watery and translucent, like panes of stained glass.

And as to the subtitle of the show? “It is exactly 300 years from the year Bronzino died to the year Mondrian was born,” Jaimes-Branger says matter-of-factly. That is the only unambiguous detail in this captivating and seductively elusive show.