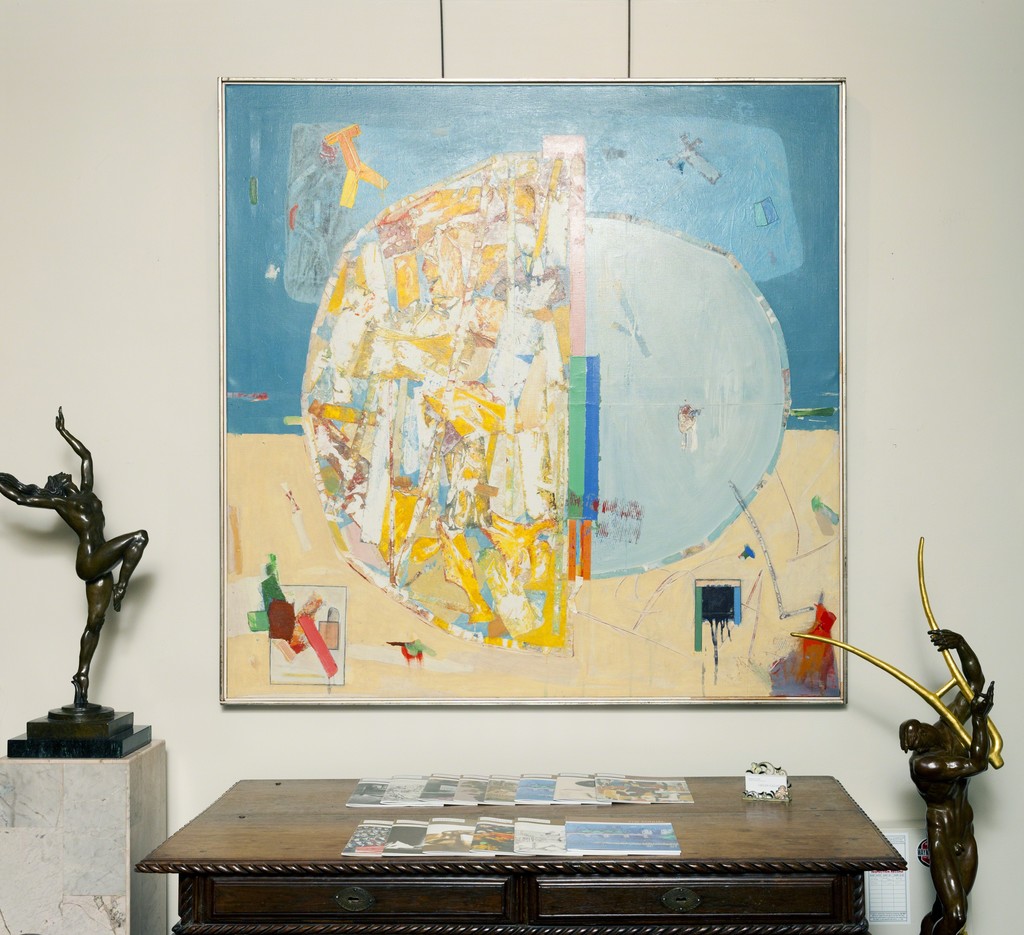 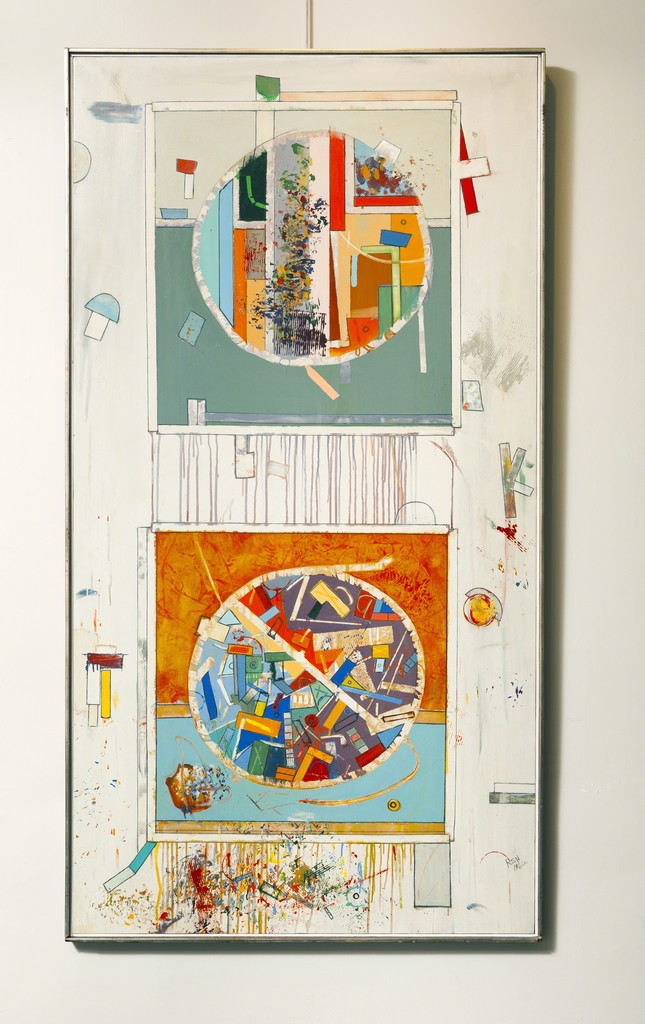 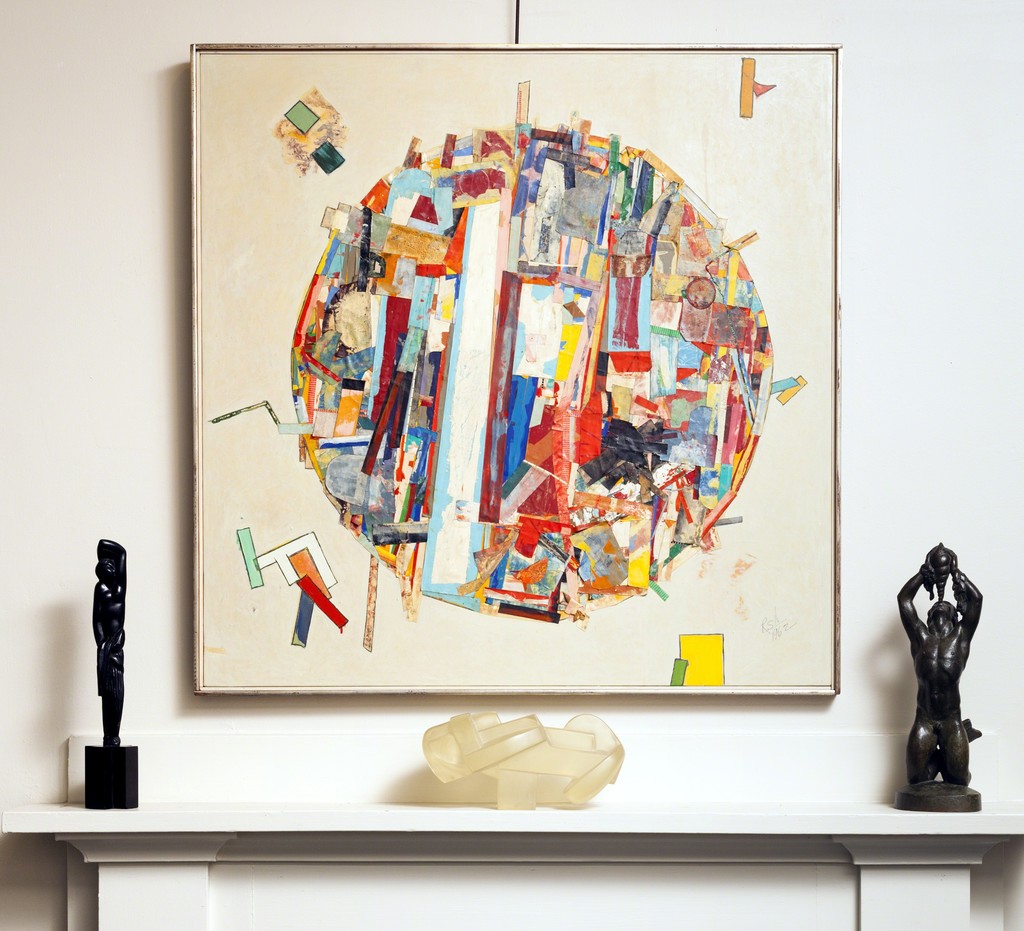 A second generation Abstract Expressionist, Robert S. Neuman (b. 1926) explores global fragmentation in his vibrant series Pedazos del Mundo – Pieces of the World. Begun in 1961 and painted in response to his time spent abroad in Germany and Spain in the 1950s, this ongoing project uses the visual language of geometric abstraction to symbolize the many people and cultures that make up our world. Childs Gallery is pleased to announce an upcoming exhibition of paintings, prints, and works on paper from Neuman’s Pedazos del Mundo series.

The Pedazos del Mundo series utilizes a recurring visual language across multiple media: concentric circles composed of many layers of shapes and colors, all symbolizing different aspects of the world. Using masking tape or circular objects like cans, Neuman paints, traces, and stamps circles and squares, repeating and arranging them into complex abstract compositions. Neuman’s approach creates a duality between the circular form’s visual and literal associations; the globe is at once an abstract geometric shape and a visual symbol for the world. The Boston art critic, Robert Taylor remarked (Boston Globe, March 25, 1979): "Neuman's pictures fuse the methods of color field paintings, emblematic abstractions and expressionist responses and, at their best as in this series are evocative and original."

A prolific painter, Neuman’s career spans more than six decades. From 1947 to 1953 Neuman was active in the San Francisco Bay Area, completing his Master of Fine Arts degree at the California College of the Arts in 1951 and holding faculty appointments at the San Francisco College of Fine Arts and the California College of Arts and Crafts. While in California, he exhibited alongside a number of established and emerging West Coast painters, including Richard Diebenkorn, David Park, Elmer Bischoff, Wayne Thiebaud, and Clyfford Still. The influence of the San Francisco School is still evident today in Neuman’s use of broad surface treatments, calligraphic drawings, energized expression, and certain influences from Oriental Art.

In 1953, Neuman was awarded a Fulbright Grant for painting, which brought him to Stuttgart, Germany to study with the abstract artist Willi Baumeister. In 1956, he received a Guggenheim Foundation Fellowship which allowed him to spend a year in Barcelona, Spain. In between these prestigious awards, Neuman left California and settled on the East Coast, where he went on to teach at SUNY New Paltz, NY, Massachusetts College of Art, MA, Brown University, RI, Harvard University, MA, and Keene State College, NH. As a result of his travels, Neuman’s oeuvre illustrates a remarkable combination of influences, lending his paintings a dramatic universality.

Robert S. Neuman and his family will attend the exhibition’s opening reception at Childs Gallery on Thursday, September 11th between 6:00 and 8:00 PM. The public is welcome to attend.