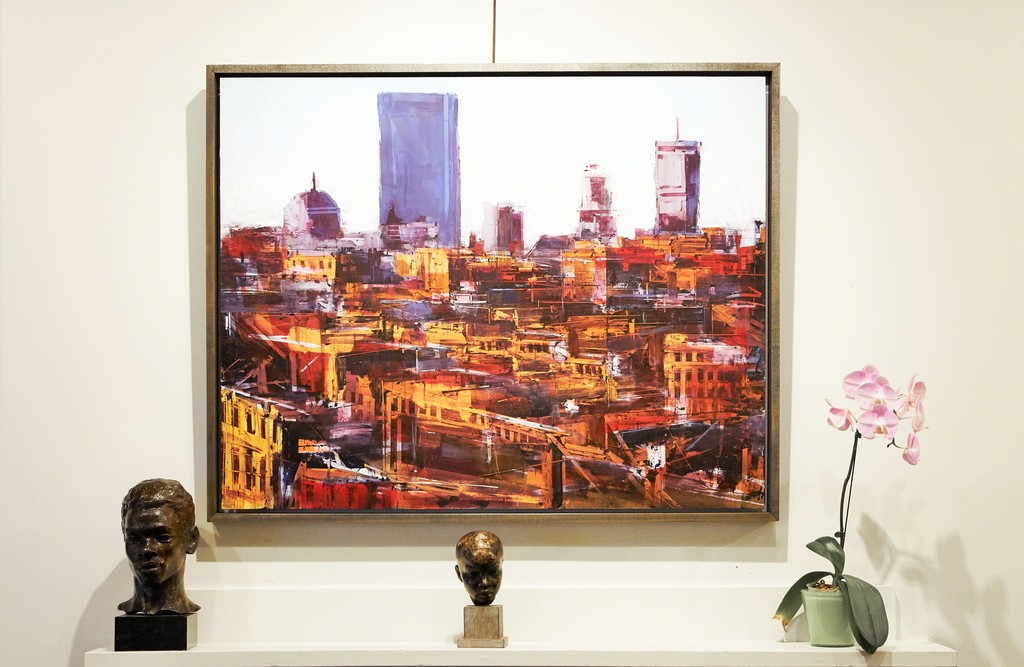 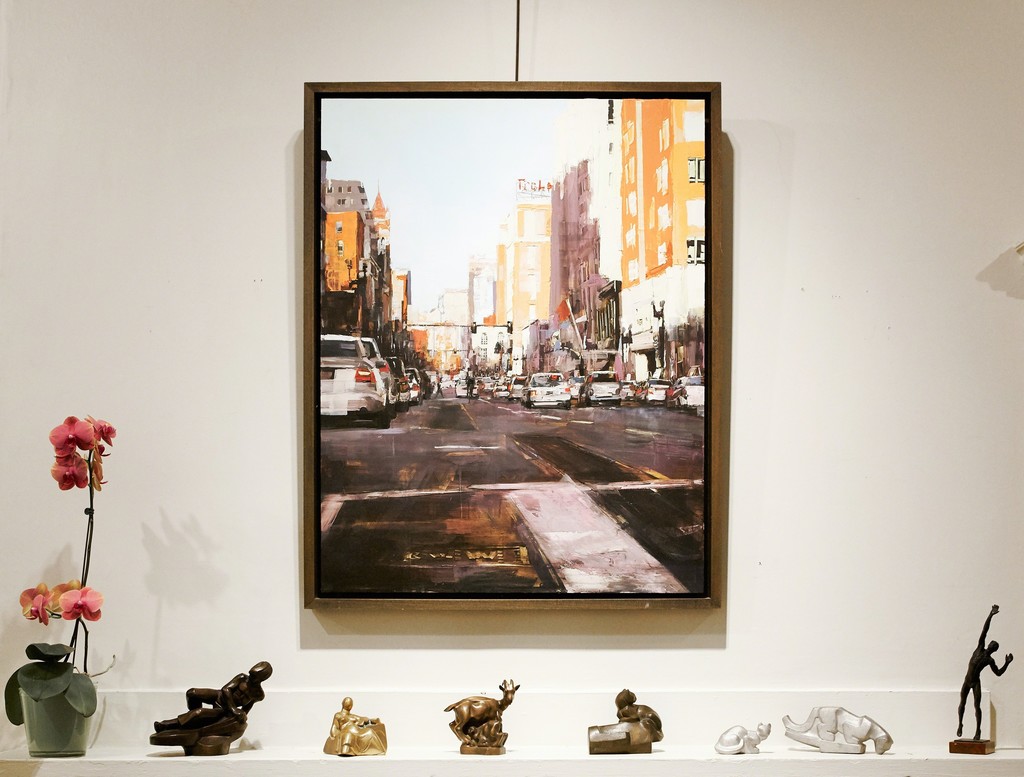 Sean Flood's works are a dynamic reflection of the artist's roots in construction and street art; line and form build his paintings up as if high-rises, while imbuing them with the inherent intensity of graffiti, allowing his cityscapes to mimic perfectly the at once homey and hectic feel of urban life. Childs Gallery is pleased to announce an upcoming exhibition of the artist’s urban scenes and city compositions.

Born and raised on the South Shore, many of Flood’s paintings depict streets, buildings, and landmarks familiar to Bostonians. His cityscapes, however, are not strictly limited to the local; European metropolitan centers such as Madrid and Rome are treated with the same kinetic energy, rendering them as vibrant, alive spaces the audience can lose themselves within. Even Flood’s quieter scenes, such as Naples Alley, exude the power of a well lived-in place, in part because he is unafraid to paint the realities of an urban landscape; no rainy day, dingy garbage bin, or errant signage is shied away from. The artist’s enthusiasm for urban life is evident in the way he depicts that which makes a city, a city: the atmosphere, energy, and architecture. By embracing these aspects, even his imaginary, nameless street compositions have the intimacy found in his real-world scenes.

Flood has always been drawing, and enjoyed his first exhibition at the age of nine. He took visual arts and drawing courses in school, as well as summer classes at the Massachusetts College of Art and Design before enrolling at the Art Institute of Boston in 2000. There, Flood briefly studied illustration but felt it too constricting on his energetic style and subsequently turned to the AIB’s Fine Arts program where he was introduced to painting via a course taught by Boston artist George Nick.

In oil, Flood found a medium that could appreciate both a frenzied energy and an eye for the construction process. Structure and architecture are the primary inspirations for his work, even though much of his training at the AIB focused upon still life and figurative painting. Flood’s father is a builder and the artist himself worked construction while in school, and his intimate understanding of the building process is evident in the exposed lines of his paintings. The artist works in short bursts, three hour sessions, to preserve the energy of his markings so that each piece is developed through the intense interaction between painter and canvas. Though Flood’s works have the obvious precision of methodical construction, he still approaches them with the force of a street artist, whether painting outside on a rooftop or back in his studio. Utilizing these seemingly opposing dynamics, precision and passion, Flood presents his audience with his own version of the modern landscape: an urban jungle created through the power of man.

Flood’s work has been exhibited at many venues including the deCordova Museum, Duxbury Art Complex Museum, the St. Botolph Club, and the Copley Society. His paintings have also been on view at Boston City Hall. In 2011 he was juried into the Copley Society as a member. His art has been featured in the Boston Globe, Artscope Magazine, and The Boston Courant. He maintains a studio in Abington, MA.

Sean Flood will attend the exhibition’s opening reception at Childs Gallery on Thursday November 13th, between 6:00 and 8:00pm. The public is welcome to attend.