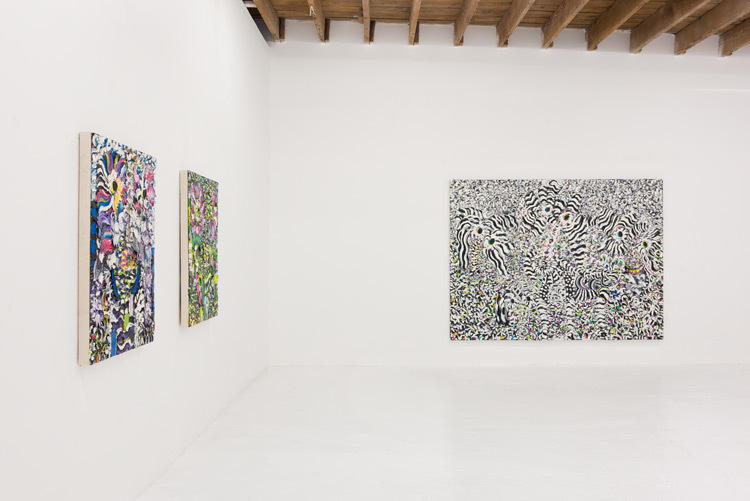 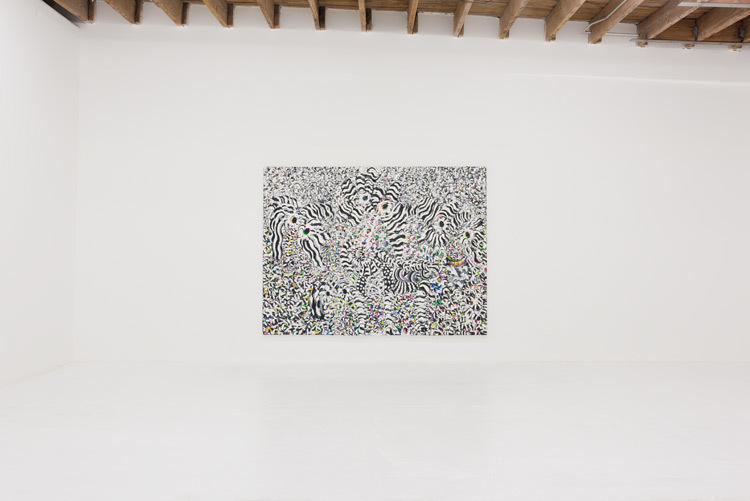 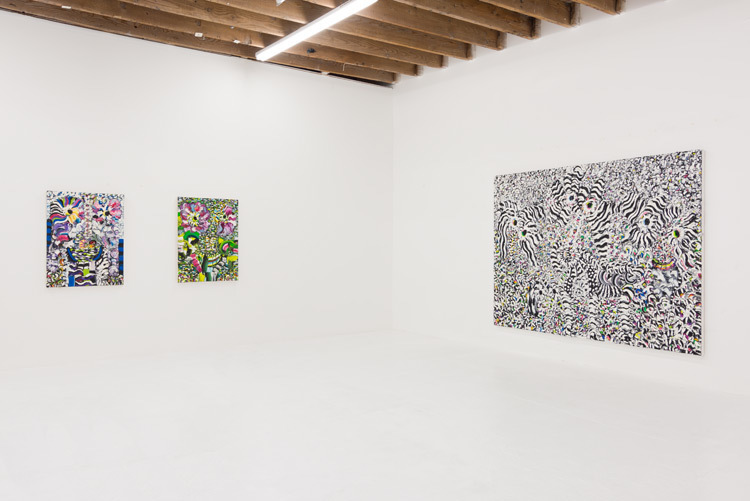 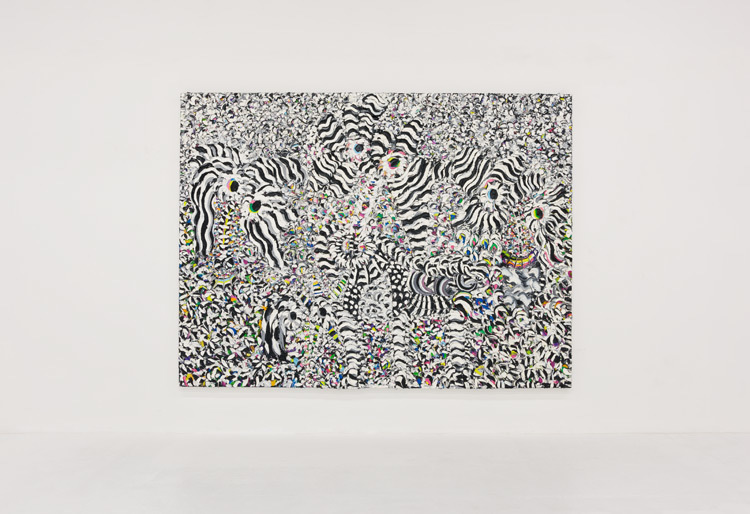 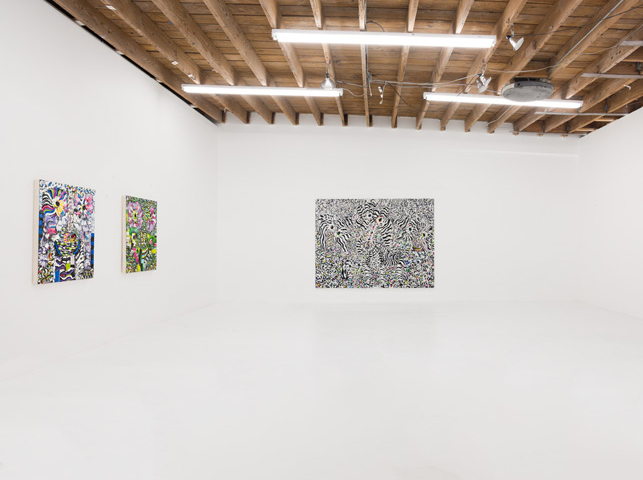 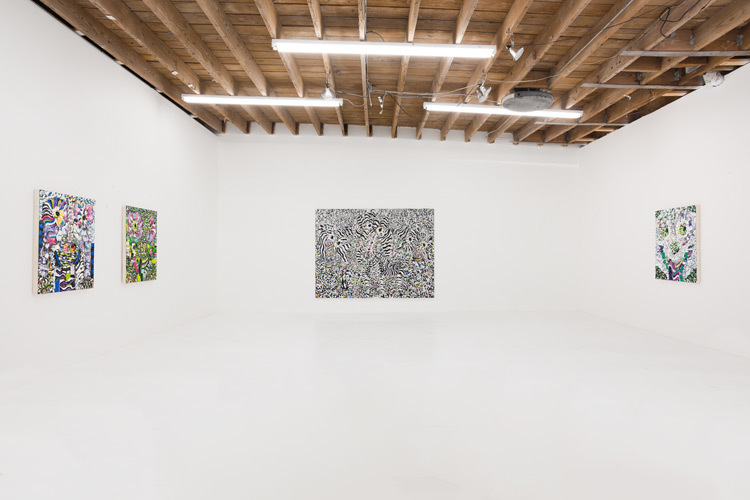 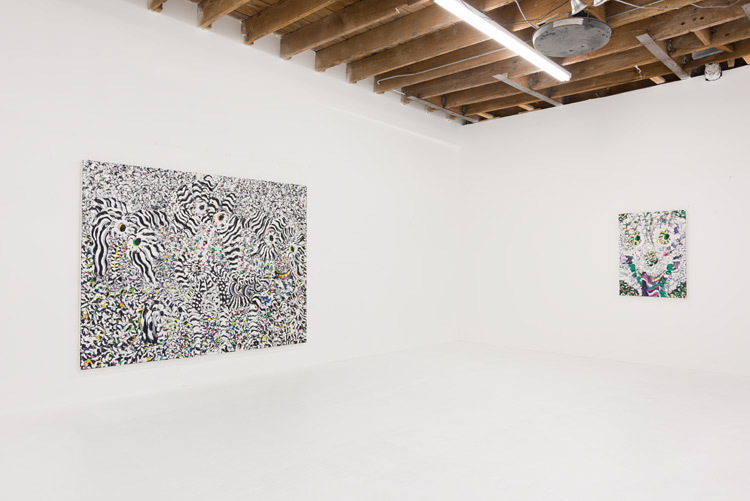 For painter Sally Bruno, oil on canvas is a contact sport. Aside from salient shifts in her content and the contexts in which she generates meaning, the physicality of her studio practice is impressively muscular and this is abundantly evident in her results. Colleague Monique Prieto has called Bruno’s style of abstract expressionism “athletic,” and in fact, Bruno is a dedicated sportswoman. This is not only interesting but germane, as a key factor in her formal style is a hearty bodily engagement with paint-handling; undertaking marathon sessions on her feet slathering thick oil pigment onto canvas, scraping it off, adding again, then more razing, more building, and so on. Her studio is like a training gym where she drives herself to push harder, test limits, and find “the zone,” and from which she often emerges aching and sore.

Prior to 2014-15, in what she now calls her “old work,” this hefty materiality operated in the service of a deliberate motif of joy, home life, and other tropes of standard-issue happiness that had nothing to do with how she really felt but was more aspirationally cheerful, trying to create peace while the storm raged outside. During this time a floral motif emerged that was animated by this topographical impasto executed in a dazzling, vibrant palette from which shades of black had been excised. Since 2015, Bruno has been doubling down on the physicality even as she moved back toward a blacker, moodier palette and away from representational imagery. In this suite of 10 new works (all from 2016), Bruno presents a continuum that comprises both deconstructed floral motifs and instances of the totally non-objective, in a stormier, ungentle color story that itself contains her meaning.

Contained within the narrative of her impressive formal gymnastics and the wrestling match with imagery is also a more personal dimension in which Bruno considers the implications of gender in the discourse on abstraction. Interrogating herself as to the degree to which precision, scale, heft, palette and symbolism can be “gendered” she undertakes the pursuit of a less overtly “feminine” mode with regard to each of those aspects. “Removing imagery removes identity, in a way,” muses Bruno, acknowledging too that both mid-century AbEx and professional sports are traditionally male-dominated worlds whose scripts needed flipping. By re-introducing more complex and competing emotional cues into the compositions, Bruno has created stronger, more existential, more deeply felt and more holistic work, which is both more honest and more ambiguous, reflecting the complicated totality of her own self and the beautiful mess of life in general.