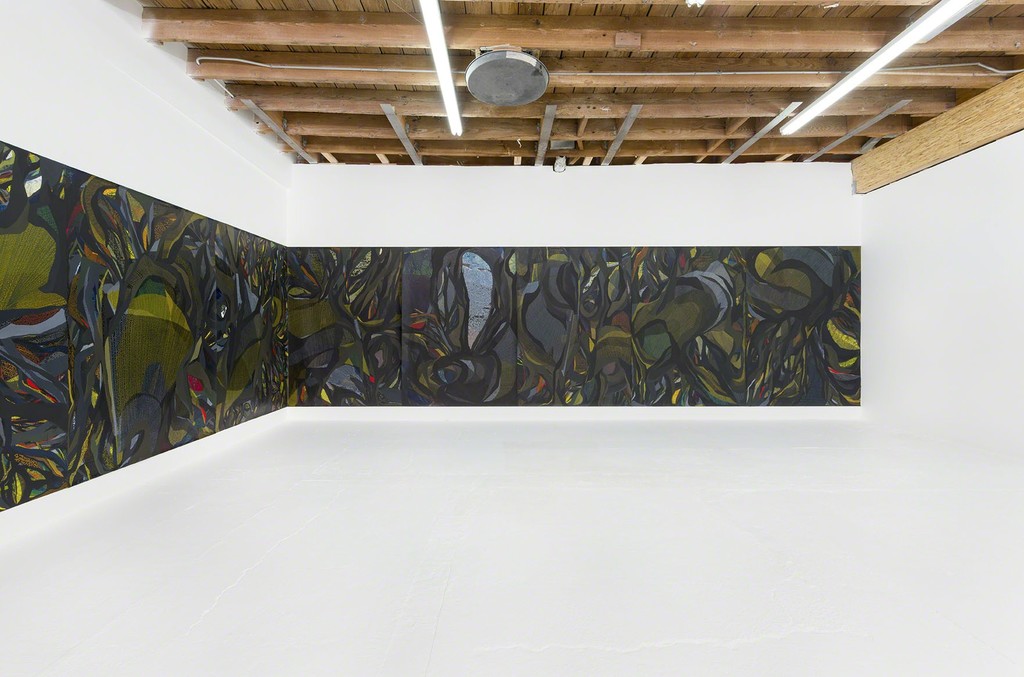 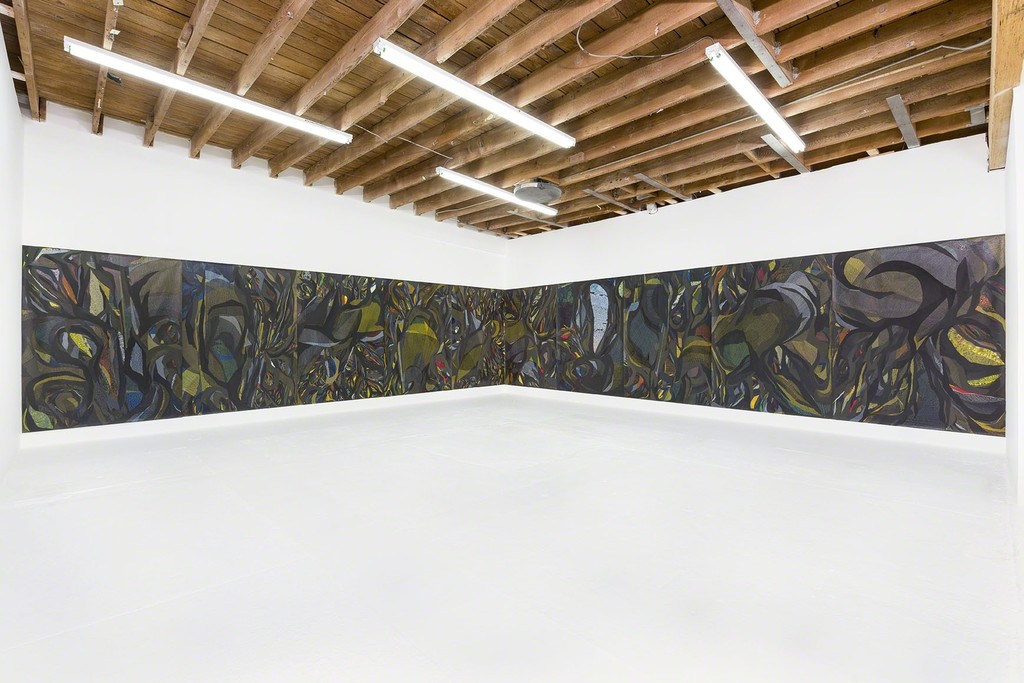 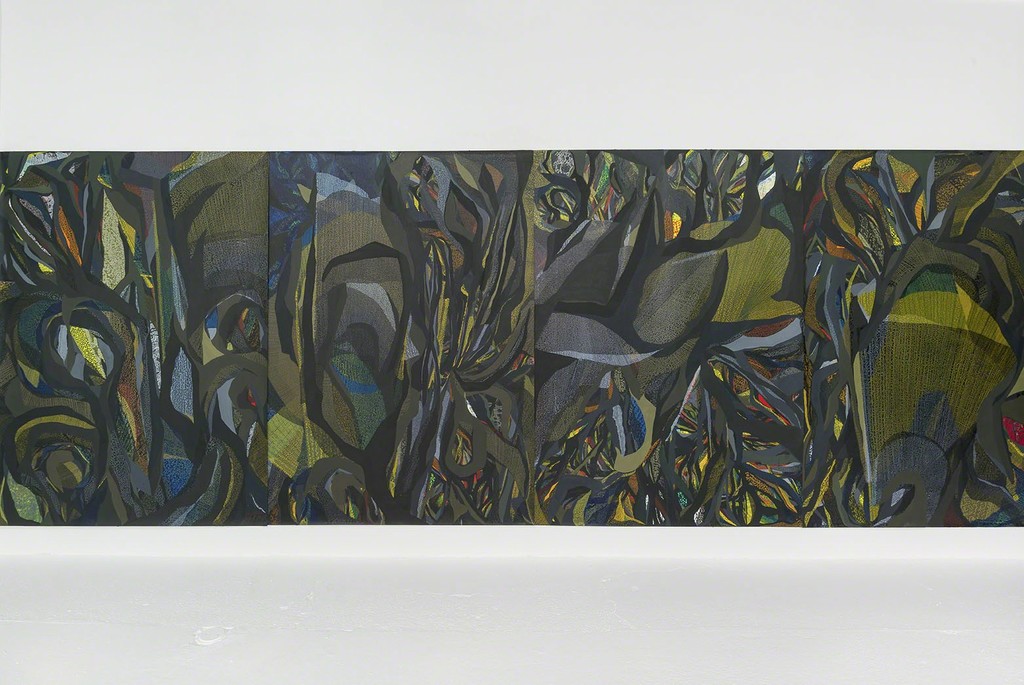 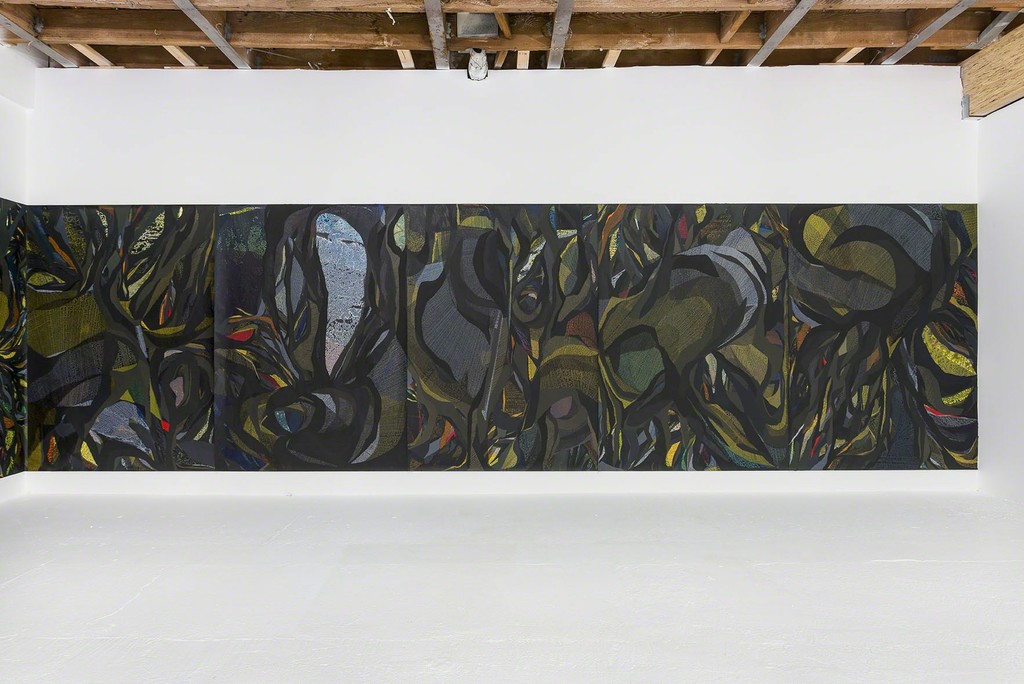 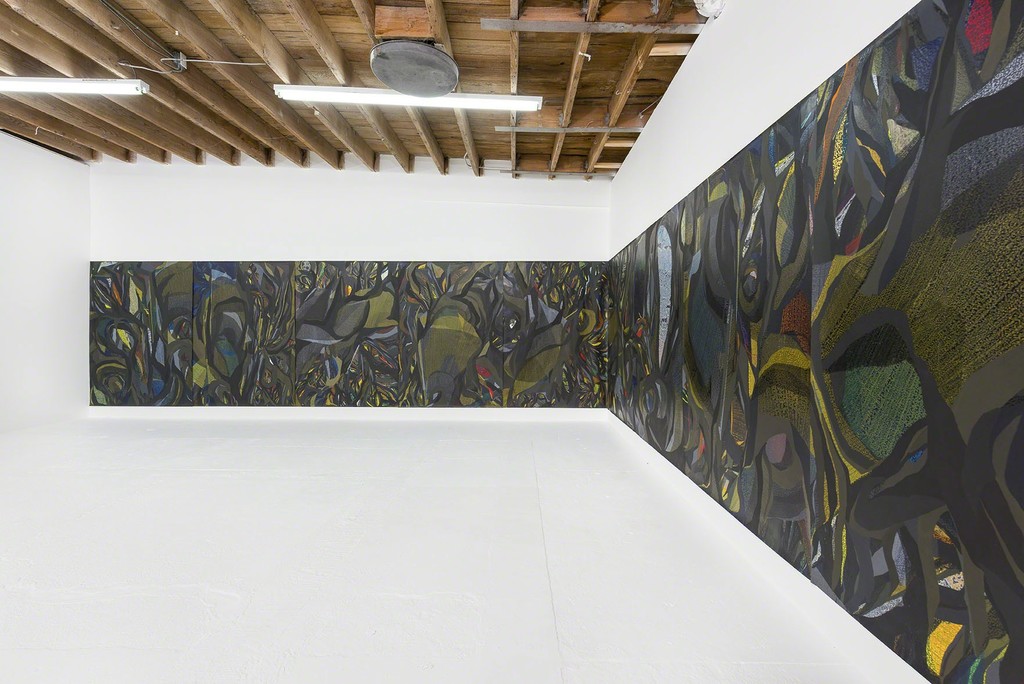 CHIMENTO CONTEMPORARY is pleased to announce our inaugural exhibition “Mutual Entanglements” with new work by Los Angeles-based artist Sandeep Mukherjee. For over a decade Mukherjee’s work has considered the notion of abstraction as a method to make moving pictures of thought. Pursuing multiple paths via portraiture, the performing body, architecture as folding, and erasure as abstraction, the work continues to explore the tension between process, affect and representation.

In this large site-sensitive installation, a series of ten paintings inhabit the entire length of two adjacent walls as they meet in a corner of the architecture. The works are made on Duralene, which is a polymer film that simulates the slick, luminous surface of celluloid. Layers of acrylic paint are applied repeatedly using diverse prosthetics ranging from brushes, concrete brooms, rollers and spray bottles. The paint is applied with physical and rhythmic gestures of the hands as the body bends, crawls and slides over the surface indexing an array of visual textures and movements. Sometimes household cleaning products are also used as a means to rupture the surface, or remove bits of information and reveal differences in underlying structure. Improvisation is key to the process that actively spatializes and temporalizes the body through its movements, activities and gestures. Each successive gesture of paint materially entangles the prior to interfere or reinforce surface effects that result in diffraction patterns. These diffraction patterns attend to the relational nature of difference and do not map where differences appear, but rather where the effects of differences appear.

Mukherjee received an MFA from UCLA, and a BFA from Otis College of Art and Design, Los Angeles. Born in Pune, India, he lives and works in Los Angeles and is a Professor of Art at Pomona College. His works are in numerous public collections, including those of MOCA, Los Angeles; MOMA, New York; LACMA; Hammer Museum, Los Angeles. Mukherjee has had solo shows at Brennan & Griffin (New York), Project 88 (Mumbai), Sister and Cottage Home (Los Angeles), Margo Leavin gallery (Los Angeles) and the Pomona College Museum of Art (Claremont) among others. Mukherjee is the recipient of the 2016 C.O.L.A. fellowship granted by the Los Angeles Cultural Affairs Department.