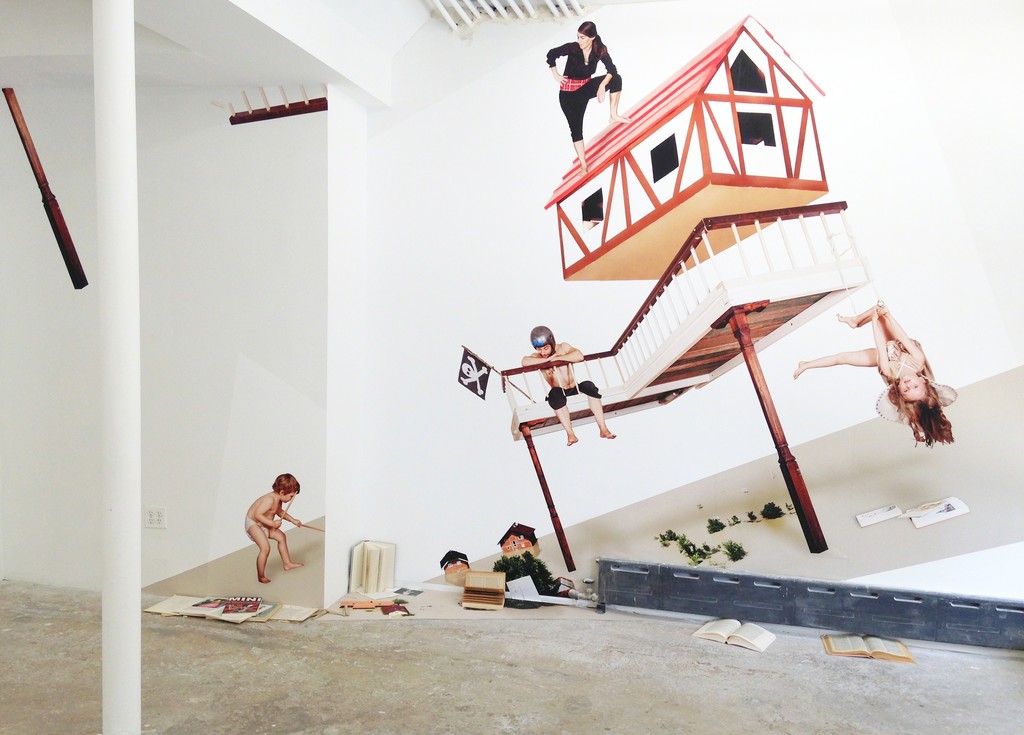 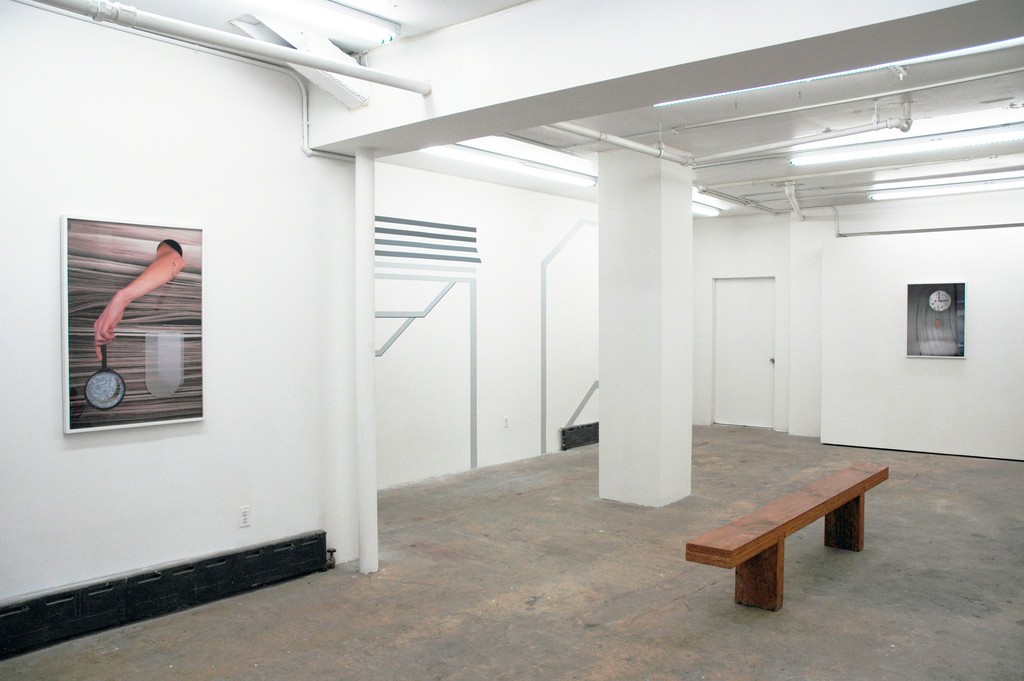 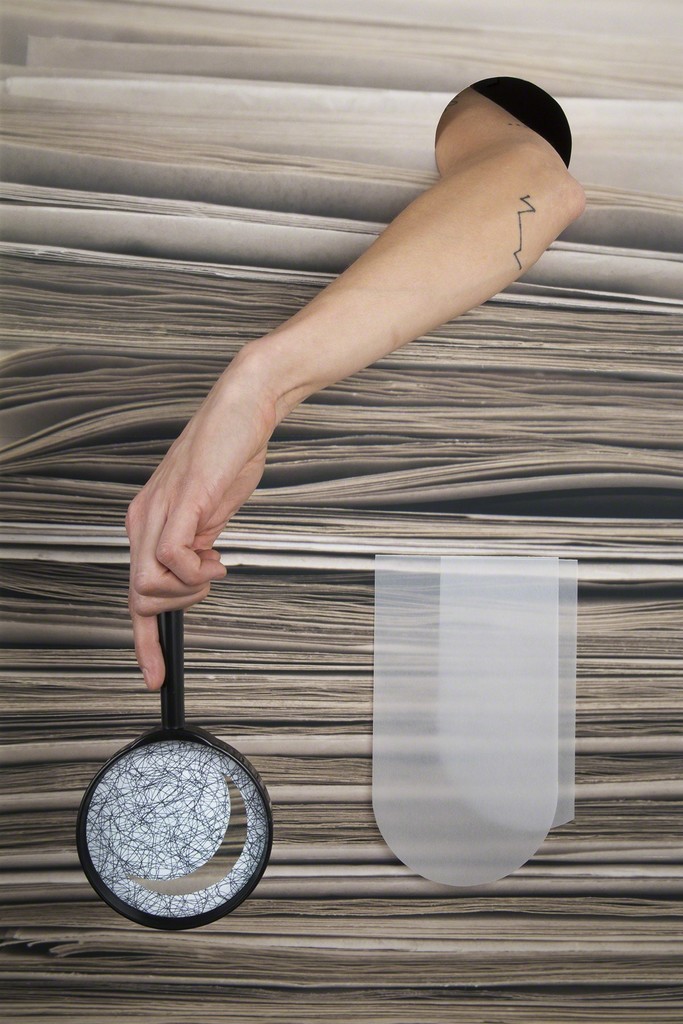 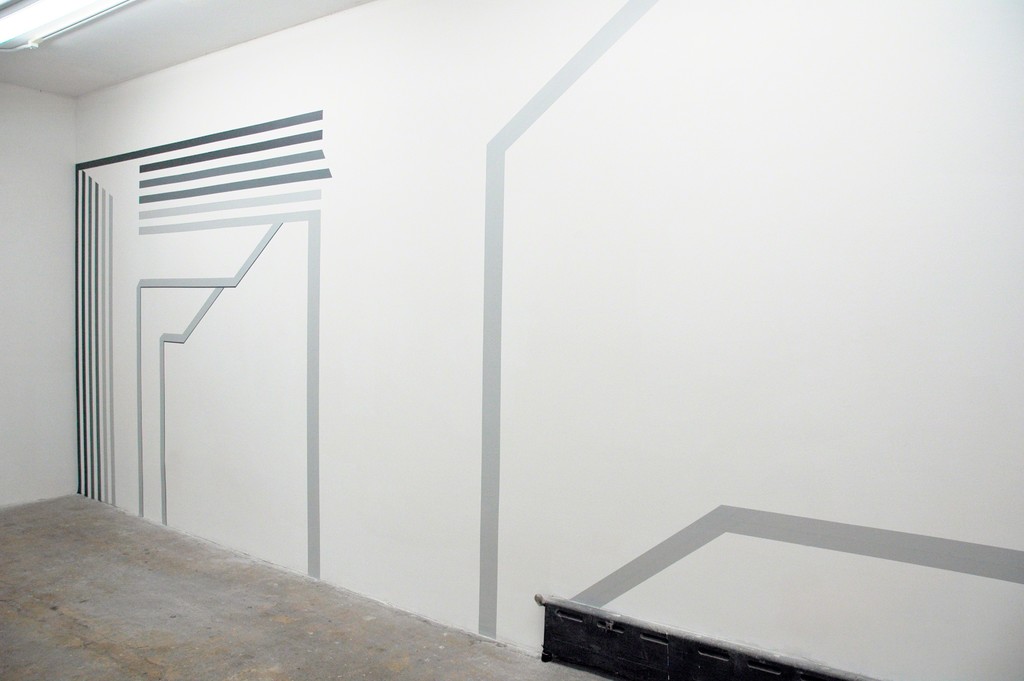 This exhibition investigates the acts of looking and perceiving through the folding and unfolding of narratives, spaces and ideas. The artists compose and manipulate supernatural and natural interventions to redefine symbolic meanings as well as push the dimensional boundaries of painting and photography. By carefully crafting spacial arrangements that are overlaid with condensed or expanded narratives, the three artists create works that are constantly reformulating themselves as they fluctuate between fiction and reality.

Jennifer Grimyser’s sophisticated photographs explore visual relationships by creating playful and deceptive illusions. Staged by hand in her studio with no digital manipulations, Grimyser’s constructed photographs fluctuate between flat surface and three-dimensional space. Her elegant compositions and layering of images and gestures of symbolic communication and emotional responses juxtapose the real versus the photographic, using humor as its medium. They test the boundaries of the original and the simulacra by blurring the line between presentation and documentation with poetic satire.

Residing somewhere between realism and abstraction, Jena H. Kim’s site specific wall installation renders a simple pictorial frame that is subverted by elements of mystery. Framing is a motif that appears frequently in Kim’s paintings and installations, functioning as a visual device which allows the viewer to explore fictional dimensions and architecturally impossible spaces. According to Kim, “By framing, a moment is captured and focus is achieved, even if the subject is mundane or … illegible… My aim is not to simply trick the viewer’s eyes but to immerse them in a fluctuating experience. In this state of ambiguity, viewers might also get a rare glimpse of their expectations and assumptions laid bare.”

Daniela Kostova examines our built environment and the ways it defines our behavior as we navigate through it. Kostova’s physically striking large scale installation blurs the line between fact and fiction. It is a complex, insightful and playful exploration of our relationships to one another and the constructed environment. For UNFOLDING, Kostova presents an Adventure Playground depicting a scene of a family surviving a flood. “Nimbly adapting to what is happening, they embrace their new roles with humor and self-confidence, keeping the “ship” above sea level and turning the danger into an exciting journey to the unknown.” Oscillating between a natural disaster and a supernatural fairytale, it acts as a metaphor for instability of the human condition.

Originally from Bulgaria, Daniela Kostova is an interdisciplinary artist who holds M.F.A. from Rensselear Polytechnic Institute, NY and the National Art Academy, Sofia. Her work is exhibited at venues such as Queens Museum of Art (NY), Kunsthalle Wien (Austria), Institute for Contemporary Art (Sofia), Centre d’art Contemporain (Geneva), Antakya Biennale (Turkey), Fondazione Sandretto Re Rebaudengo, (Torino), Kunsthalle Fridericianum (Kassel) and others. In 2016 she had a solo show at A.I.R. Gallery while serving as Gallery Fellow and was also a resident at the Center for Art and Urbanism (ZK/U), Berlin. Her awards include the Unlimited Award for Contemporary Bulgarian Art and travel grants from NYFA, the American Foundation for Bulgaria and the European Cultural Foundation. Her work has been reviewed in The New York Times, The Brooklyn Rail, Flash Art, and Art in America.

Eun Young Choi is a Brooklyn-based artist and curator originally from Seoul, Korea. She holds a MFA from the School of Visual Arts and a BFA from the School of the Art Institute of Chicago. Choi has organized exhibitions and performance events in collaboration with various organizations including the AHL Foundation, NARS Foundation, New Museum's IDEAS CITY Festival, National Academy Museum, United Nations Headquarters, Asian American Art Centre and Arario Gallery New York among others. Her programming and exhibitions have been featured in the New York Times, New York magazine, VOGUE magazine, The Brooklyn Rail, Artcritical and numerous other media outlets.