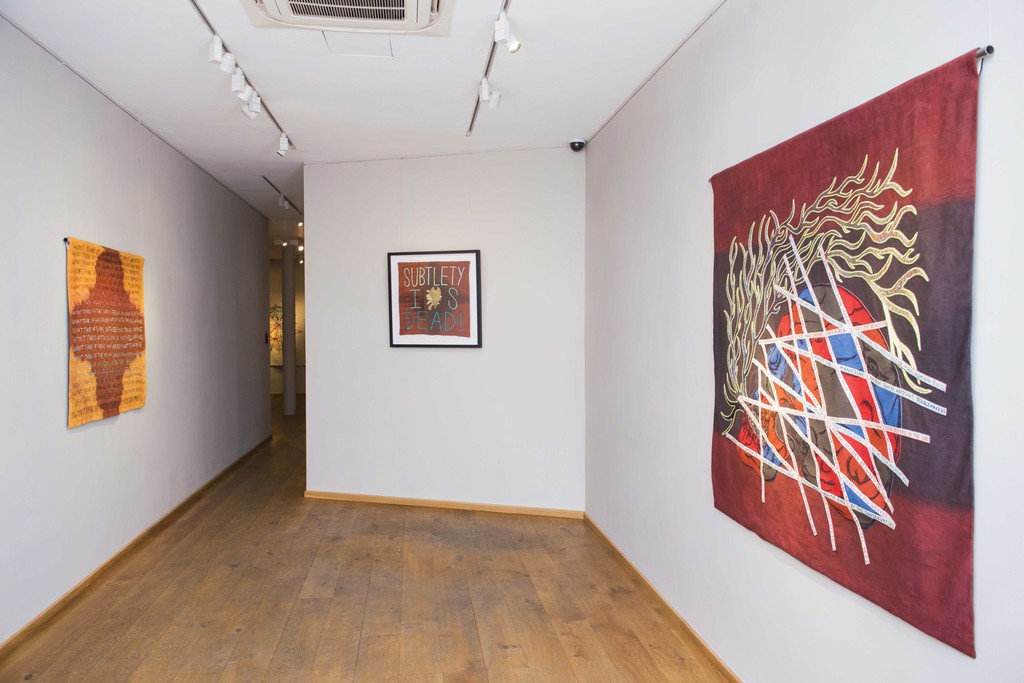 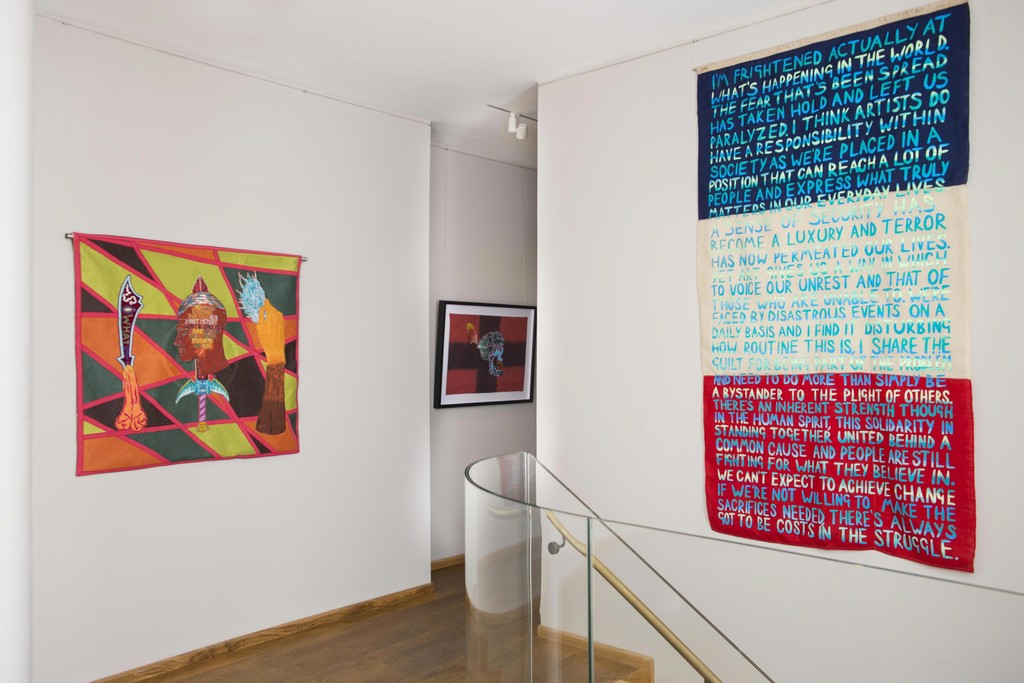 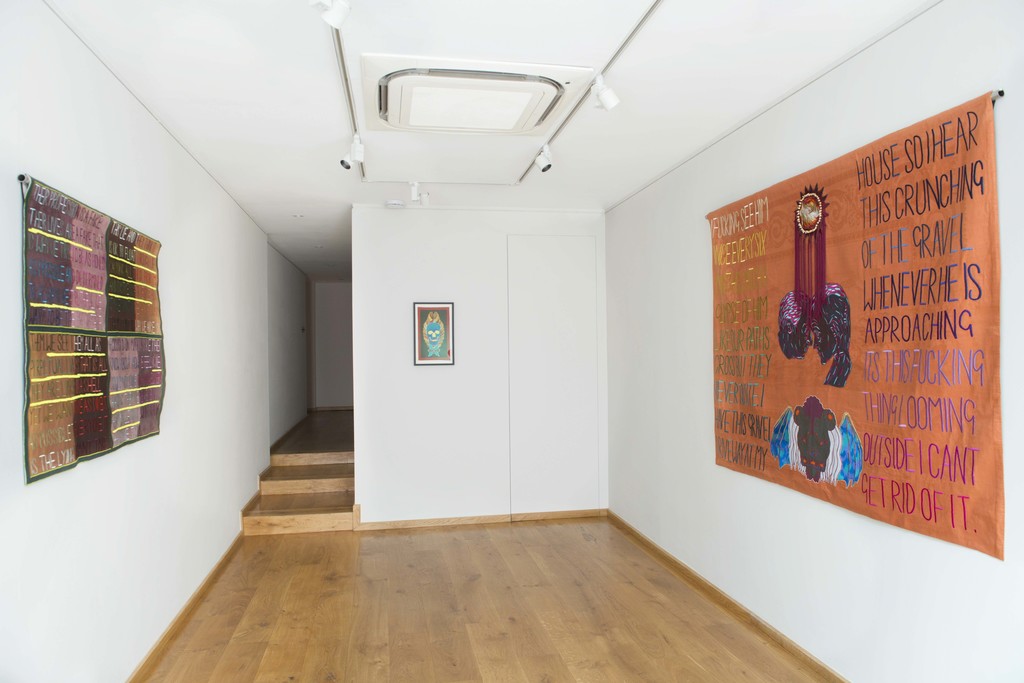 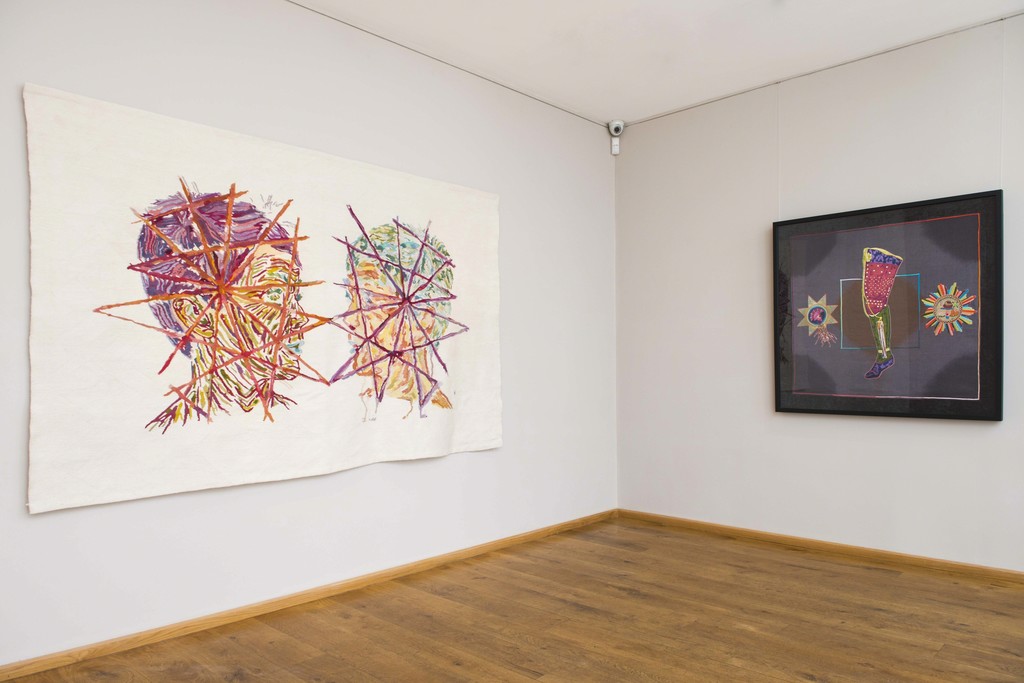 We are thrilled to announce the first solo exhibition of textile works by artist Henry Hussey at our London show room on 8 Duke Street, St James’s. Reliquaries will present a selection of new works.

Henry Hussey’s artistic practice is rooted in deeply personal enquiry. Working with a range of traditional and contemporary processes such as embroidery and digital printing, his textile-based artworks utilise materials as emotionally expressive tools.

Combining found ecclesiastical and political textiles with hand-dyed fabrics, intricate bead-work and digitally printed photographs, Hussey’s artworks incorporate materials that are highly tactile and sumptuous. Lace, silk, damask, velvet, Swarovski crystals and faux pearls feature in his intensely worked surfaces. The historical connotations of the materials used are expanded by the artist’s use of vibrant colour and his distinctive graphic-style stitched outlines. The drama of the materials selected is emphasised by the way the artworks are hung like flags or tapestries directly on to the wall, often without glass. Hussey likes the fact that the artworks he produces could equally be at home in a museum or a protest march.

The pieces shown within the exhibition ‘Reliquaries’ are largely drawn from two distinct bodies of research that engage with significant experiences from the artist’s life. Hussey describes the making of such artworks as cathartic in that they deal directly and honestly with the complexities of his familial relationships. Hussey’s working methodology begins with an emotional moment he feels he must express. Working with actors and a ‘skeleton script’ he pre-prepares allows him to probe a particular idea more deeply. These live performance sessions allow Hussey to capture genuine responses to emotion through drawing, photography and audio recording, paying careful attention to the ways that the face and the body move in reaction to specific emotional intensities.

One series of work, ‘Locking Horns’, explores what Hussey describes as his anger toward his father. Using diary-like sections of stitched text that leave no room for misunderstanding in tandem with striking, sometimes quite violent images, pieces such as ‘Eclipse’ and ‘Locking Horns’ are powerful and intimate slices of a relationship that speak of power, control and usurpation. Another series also titled ‘Reliquaries’, meanwhile, uncovers aspects of death and memory. Again rooted in the artist’s personal history, the artworks explore the ways that memories of a person are fragmented and composite – pieces of a life that are assembled in hindsight. Materials are significant within everything Hussey makes but perhaps none more so than in ‘Reliquaries’, in their allusions to Victorian mourning clothing, jewellery and domestic interior preparation by way of respect and remembrance.
Alongside a focus on the human body, other imagery used within Hussey’s practice derives from the artist’s extensive library of sketches of objects from museum collections and religious buildings. This first-hand research allows Hussey to imbue his artworks with a fineness of detail that cannot be gleaned from image-based research alone. The inclusion of decorative and often talismanic objects is important in that these reinforce the emotions outlined in the figures and texts, and serve as visual props for the actors within the artist’s research sessions.

The time consuming and labour intensive processes that the artist uses mean that only the very strongest and most urgent of his ideas are made manifest. Hussey’s artworks are meticulously planned and distilled, though there is some room for more organic development within a piece as it evolves. The artist’s skilful layering and interweaving of text, image and material forms artworks that are deeply resonant, memorable and affecting.

Henry Hussey completed a BA (Hons) at Chelsea College of Art, 2011, followed by an MA in Textiles at the Royal College of Art, 2013. Hussey has exhibited in Hong Kong and nationally in the Bloomberg New Contemporaries exhibition, 2014, and the Royal Academy Summer Show, 2014. The artist is based in Surrey, UK.