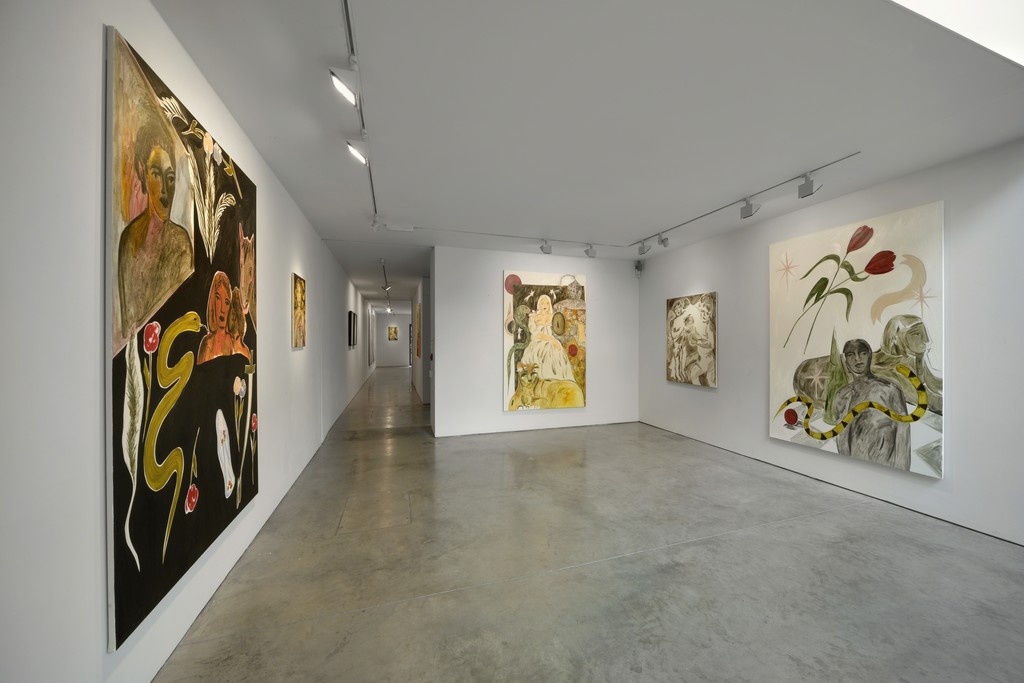 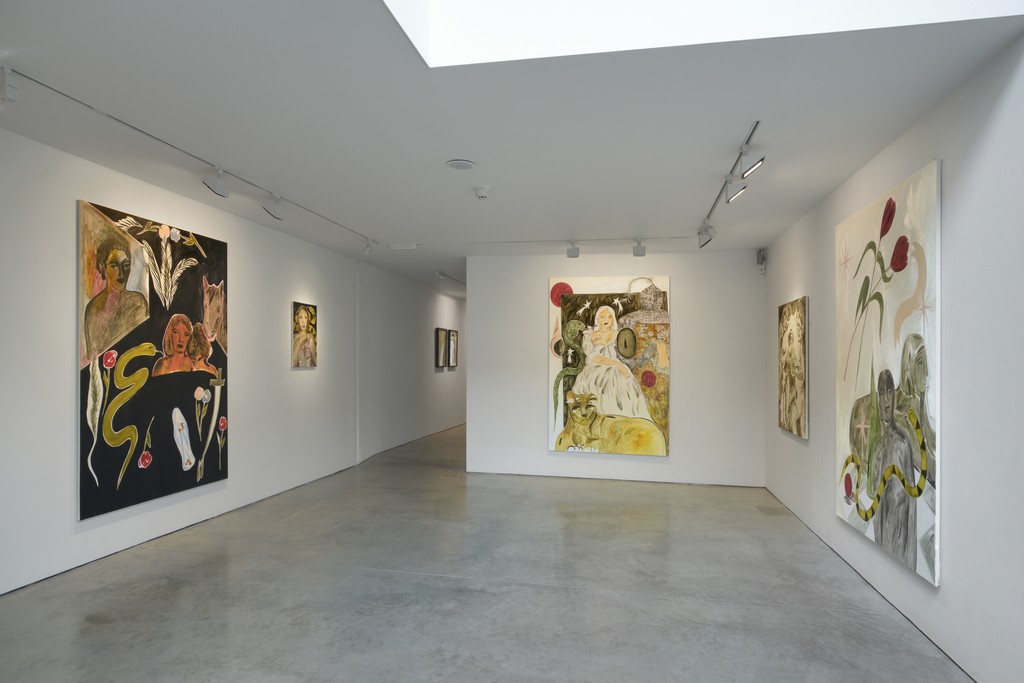 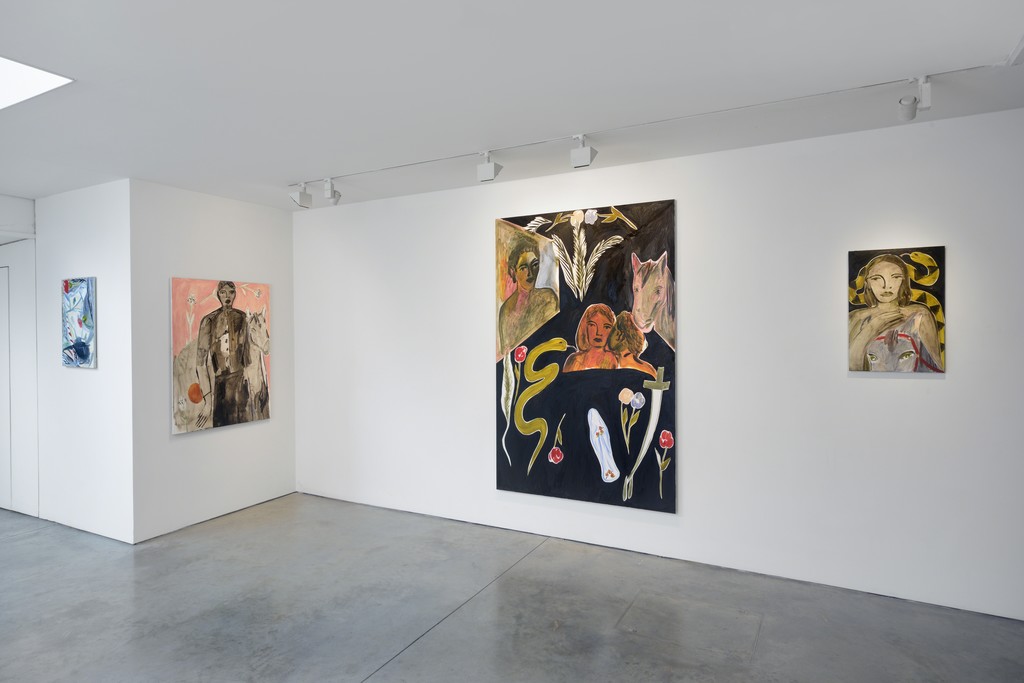 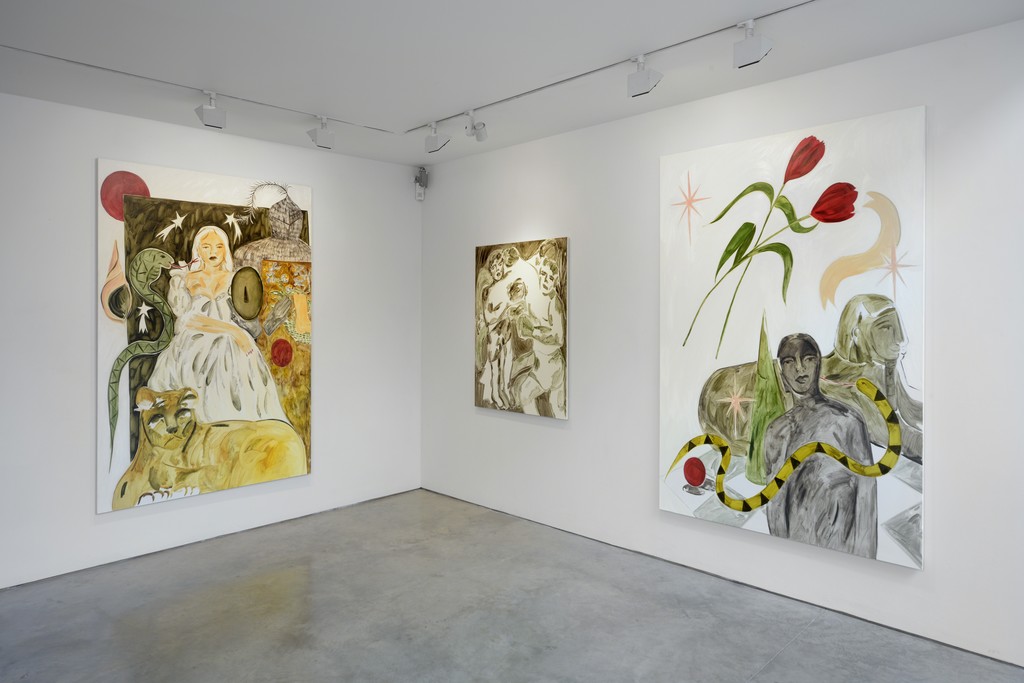 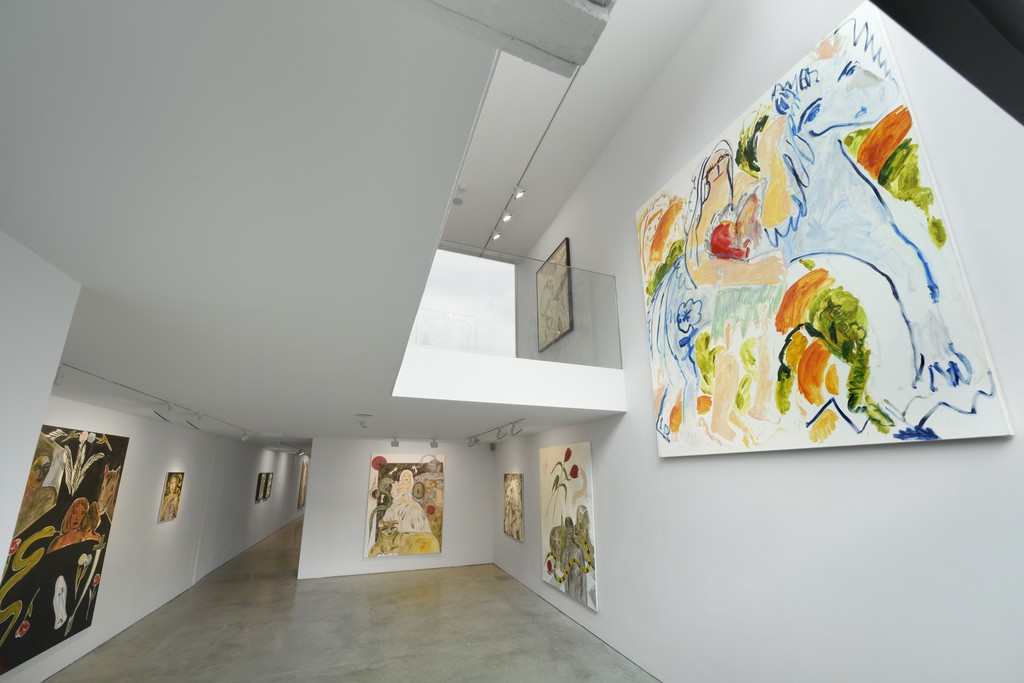 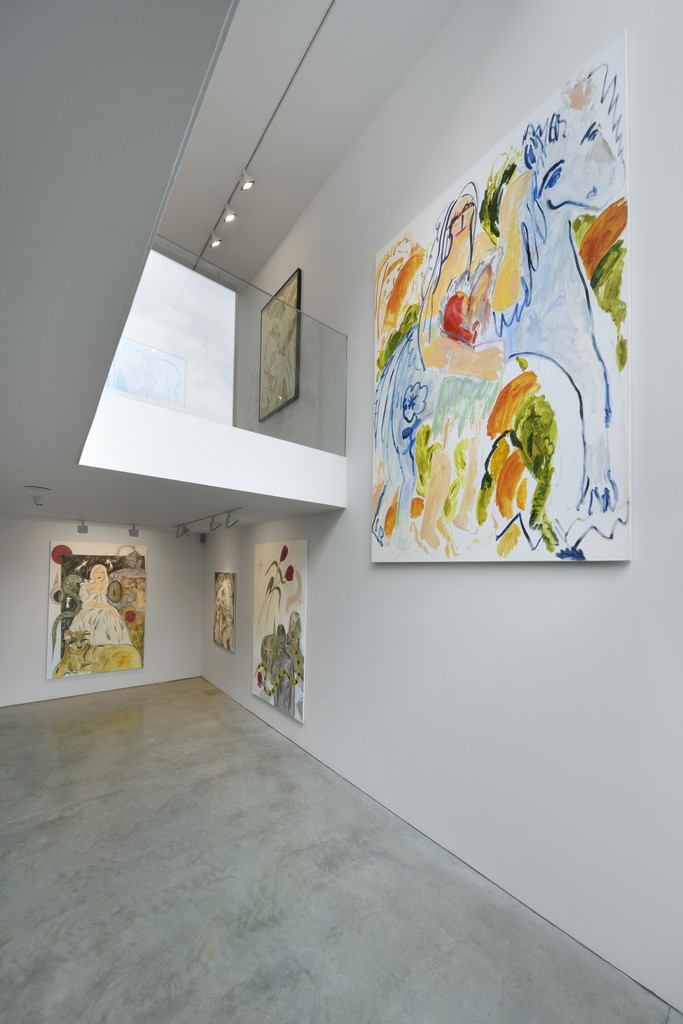 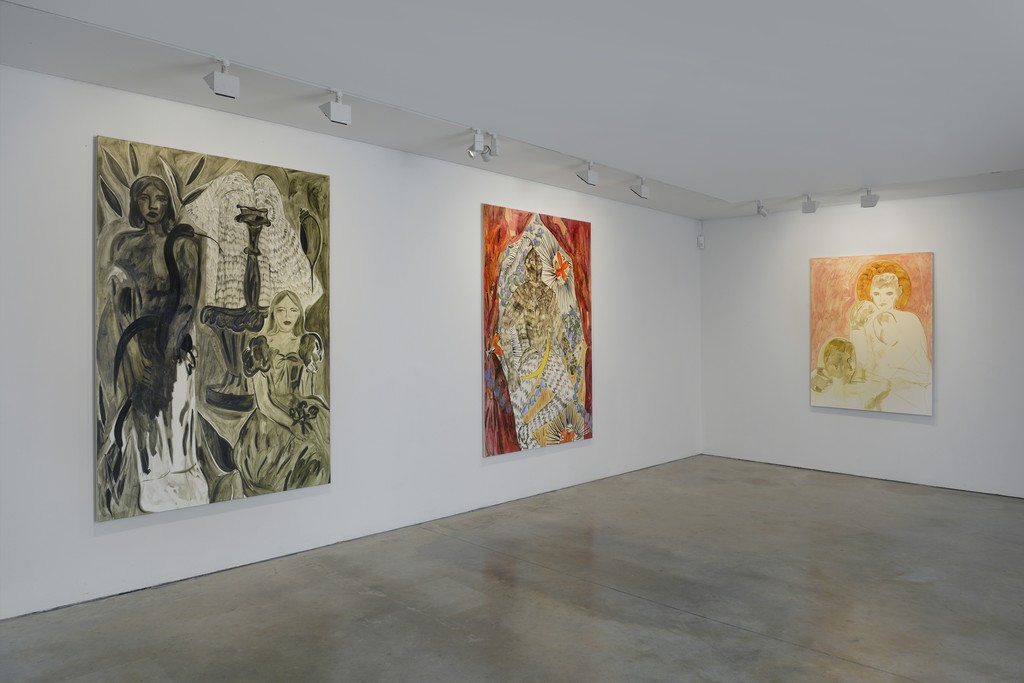 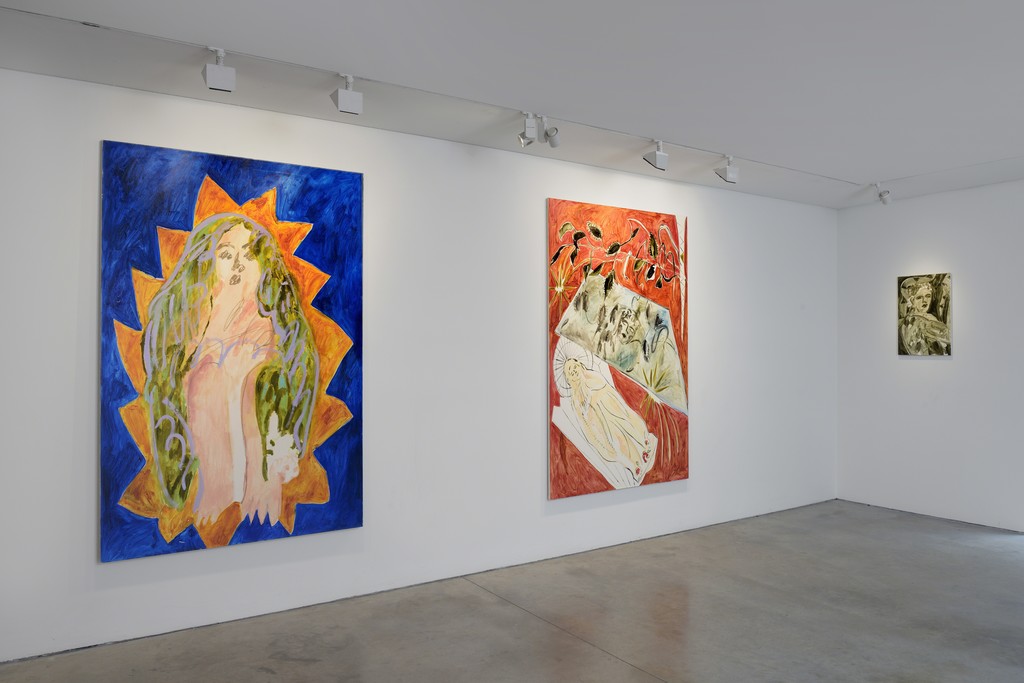 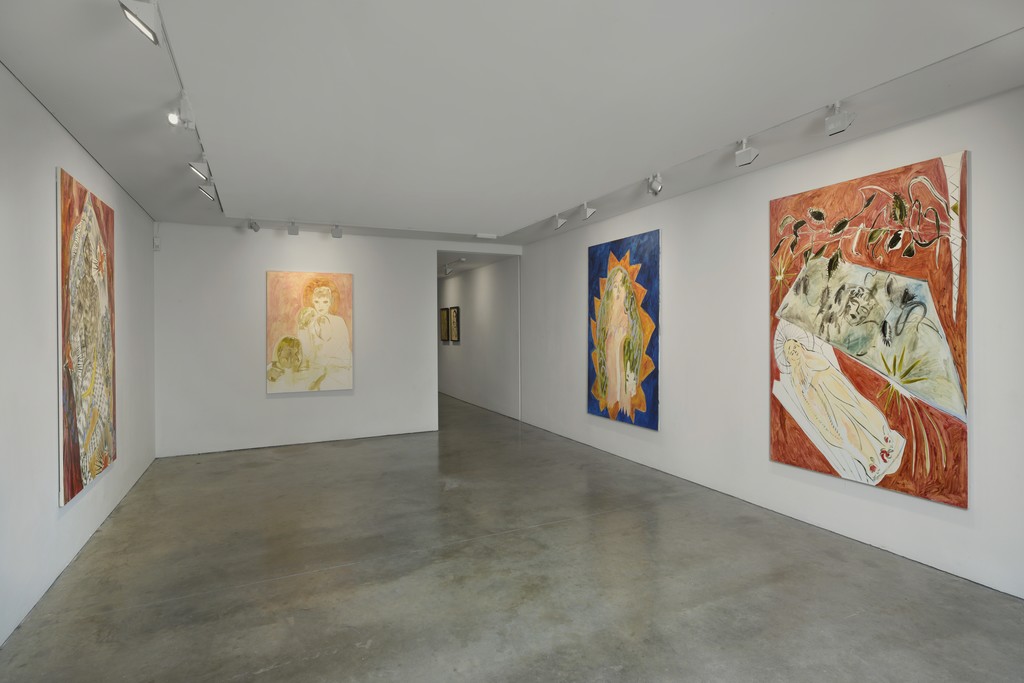 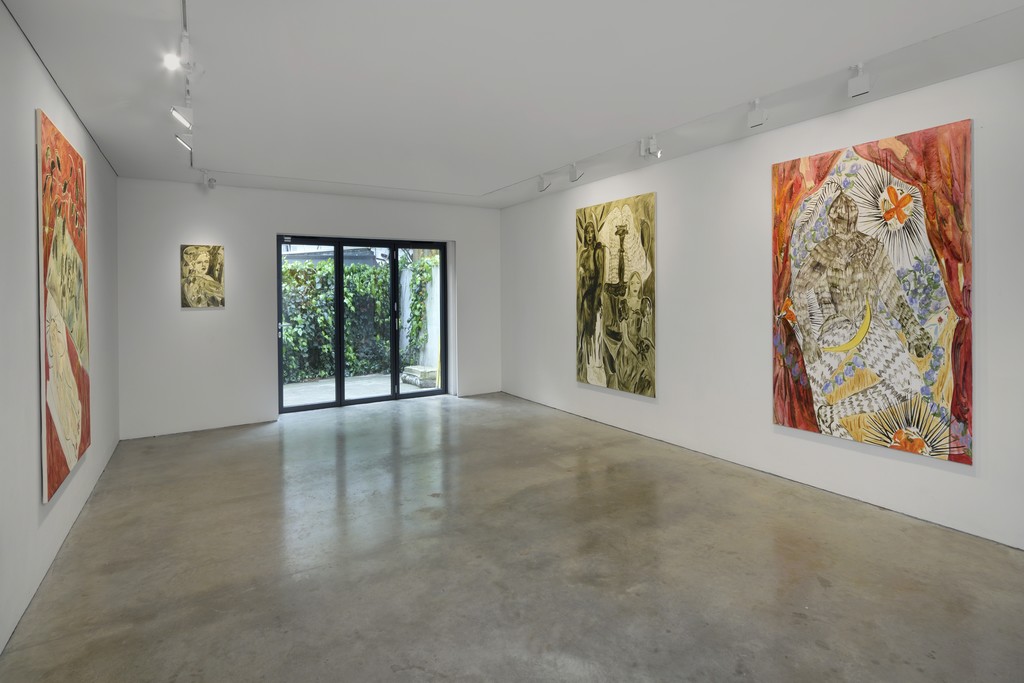 Young British painter Faye Wei Wei graduated from the Slade School of Fine Art in the summer of 2016. Her bold, poetic works revolve around religious iconography and classical myth, centring on love rituals and the theatricality of masculine and feminine tropes.

Wei Wei’s painting is deeply idiosyncratic: although it might sometimes suggest themes of medieval courtly romance or a particular mythic narrative, at other moments it seems to depart into a more ambiguous, interior space of incongruity and uncertainty. Wei Wei’s work plays with the language of personal symbols—the snake/the thorns, the boy/the girl, the mirror/the wall, two boxers, two suns, sea urchin/lioness—these dualities culminating in an imagined world where the protagonists seem to interlink and wink at one another. Stateliness coincides with brute force and pastel softness; symbols seem to shake free of their moorings and oat, surrealistically, on the liquid expanse of dream.
Sometimes reminiscent of Picasso’s Vollard Suite, Wei Wei’s images quiver with a lively, lyrical motion, combining classical poise with vibrant immediacy. The scenes might be imagined, but the energetic, bold brushstrokes, executed in thin layers, suggest a scene actually witnessed, with the momentum of a direct sketch. This results partly from her view of painting as a sensual, pleasurable process of infatuation. The large scale of her work, meanwhile, also emerges from her desire that its limits be those of her own body. In this way, the painting process itself is conceived as an intimate choreography between actual and pictorial space.

For the viewer, the result is an acute, yet ambiguous sense of Wei Wei’s own immediate presence: a subtle impression of physical proximity shaded with eros. But if the faces of Wei Wei’s figures seem contrastingly detached, this also arises from her interest in movement, gesture and performance: particularly her interest in Japanese Noh theatre, where masks are worn and plays follow strict formal rules. While the conventions of Noh might seem to limit emotive expression, they actually encourage its transmission through a highly subtle and nuanced language of gesture and movement. Wei Wei’s compositions show her to be alive to this example. In fact, the use of the mask in Noh theatre aptly characterises a sense produced by her paintings more generally: that the motionless composure of the painted image is but a momentary surface, floating on a luminous depth of feeling beneath.