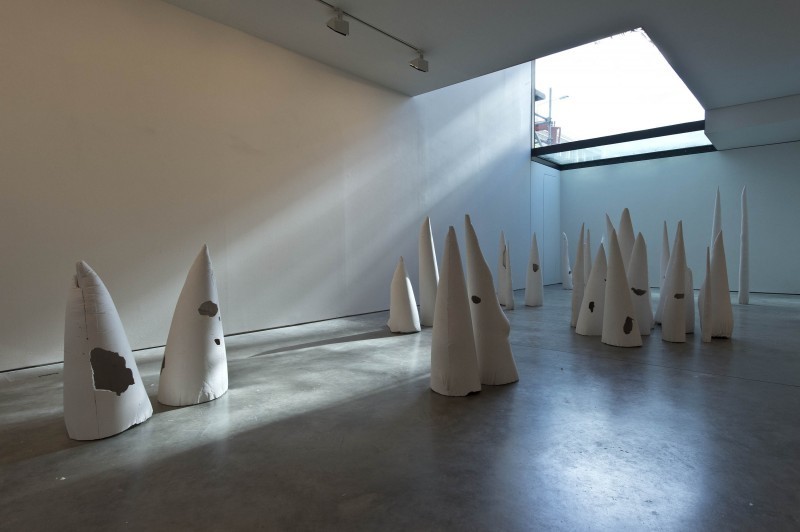 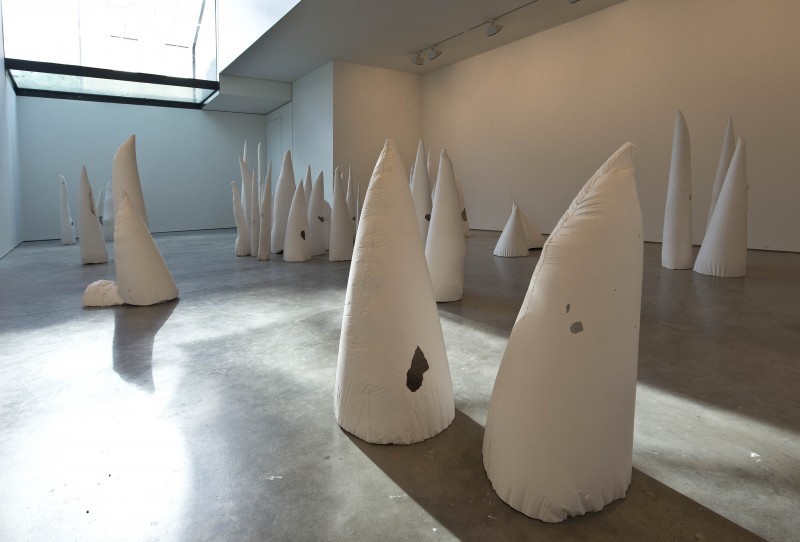 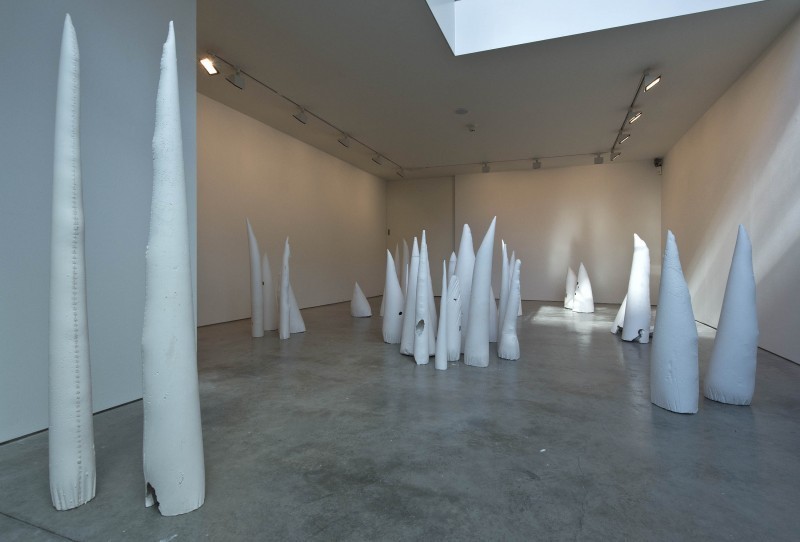 The multi-disciplinary exhibition draws its name from the 1970 Archie Whitewater song. As the centre of the show the artist presents the sculptural piece oKoKoK, composed of 50 white plaster hoods. Invested with the poise of an undersea coral reef – whose stillness seems to conceal some secret movement – the work strikes an impressive pose across the gallery floor, a vertiginous spillage of form. Softly conical shapes, unquestionably phallic, resonate with the childhood playfulness of Tove Jansson’s Moomin Valley, whilst also recalling the violent costumery of the Ku Klux Klan – the absurd triviality of the dressing-up box tangled with lugubrious depravity. Accompanying this is Murder by Chocolate, an aural-spatial composition of 12 hand-made glass speakers, through which the voices of Collings-James and a 65-year-old Belizean doorman named Mario, recorded together in New York, read out the dishes from American dessert menus. A husky, seductive atmosphere is established around the instantaneity of physical encounter in counterpoint with the distance created by the recording and the speakers. A mutual language falteringly bridges the gap. The exhibition culminates on December 5th with an offsite surround-sound video installation. The Descent revitalises a well-worn arrangement: ‘The woman descending the staircase is a myth that has been indulged for decades on and off the screen,’ comments Collings-James. Here, cinematic staircase sequences are layered, leading towards a convulsive crescendo of audiovisual stimulation. This piece, the next step on from Duchamp and Richter, closes the show on an astute and arresting note. * Lament for the Walking Dead is Phoebe’s first solo show in her home city since 2011′s Broken Hearts Requiem at the Maurice Eindhart Neu Gallery. During this period she has exhibited to widespread acclaim in New York, Berlin, Beirut, Madrid, Lisbon, Athens and Los Angeles, as well as Miami Art Basel, the 2012 Marrakech Biennale and most recently at the Preteen Gallery in Mexico. A graduate of Goldsmith’s College, Collings-James has established herself as a recognised name within the contemporary art scene. Her responses to what she calls ‘the predicted sensory overload of my generation’ are characterised by a nuanced yet potent directness, with the closely considered sexuality of her work underwritten by a sustained engagement with feminist perspectives.