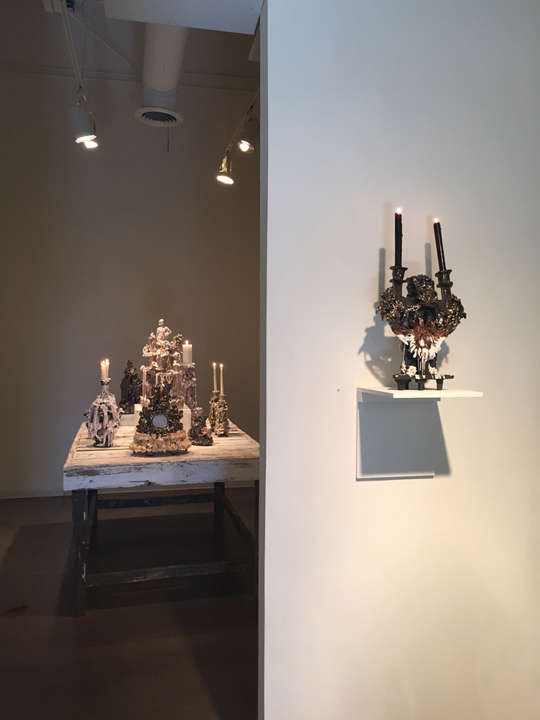 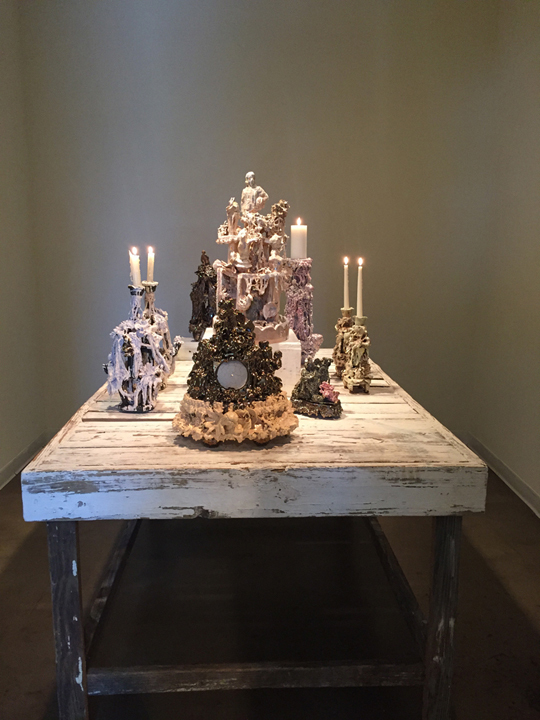 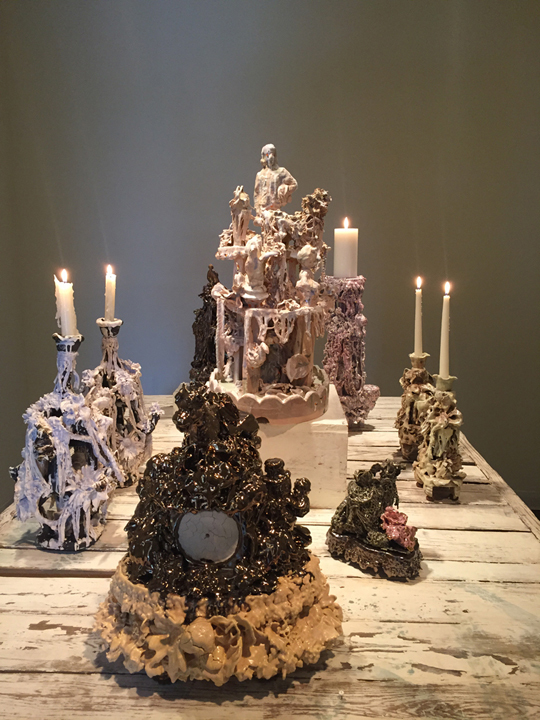 Anthony Sonnenberg’s luscious ceramic sculptures set a stage calling the spectator to ekstasis (to be or to stand outside one’s self.) The elaborate hand-built ceramic sculptures echo the decadent elaborations of Baroque and Rococo fioriture. Initially reminiscent of past civilizations’ aesthetic efflorescence, upon closer inspection, the viewer can vaguely identify familiar modern tchotchkes built into the structure.

A multi-media artist, Anthony Sonnenberg often works with the Greek mythology of Silenus, the tutor and companion to the wine god, Dionysus. Believed to derive wisdom from over-indulgence in alcohol, Silenus’ became a key player in the story of King Midas, the ultimate cautionary tale to those over-consumed with passion for material wealth. Casting himself in the role of Silenus, Sonnenberg deftly explores the King Midas story, as well as later interpretations by Nietzsche, for whom art enables transcending the pessimistic ‘Wisdom of Silenus’.

Beautiful memento mori, the platinum lusters and thick glazes appear to be melting, revealing the duality underneath, and a darker side of desire: asking, “if yielding to desire hastens our own demise, can the cost ever be worth the reward?”

Born in 1986 in Graham, TX, Anthony Sonnenberg earned a BA with an emphasis in Italian and Art History in 2009 and an MFA in Sculpture from the University of Washington, Seattle in 2012. Residences include; Residencies; Artist in Resident at Sculpture Space, Utica NY (2014); the Archie Bray Foundation for the Ceramic Arts, Helena MT (2014); Pilchuck Glass School, Stanwood WA (2012); and the Ox-Bow School, Saugatuck MI (2008). Sonnenberg was selected as a resident at the Lawndale Artist Studio Program in Houston, TX which will extend from September, 2015 through May 2016. One-person exhibitions include; Lawndale Art Center, Houston TX (2015); The Old Jail Art Center, Albany TX (2013); the Texas Biennial (2011 & 2013); Old Post Office Museum and Art Center, Graham TX (2012); Co-lab Projects, Austin, TX (2012) and the Seattle Art Museum, Seattle WA (2011).

Conduit Gallery is honored to announce that Anthony Sonnenberg has joined Conduit Gallery as a represented artist. We welcome Anthony’s remarkable skill as a sculptor and the wealth or ideas he brings to conversations in contemporary art.