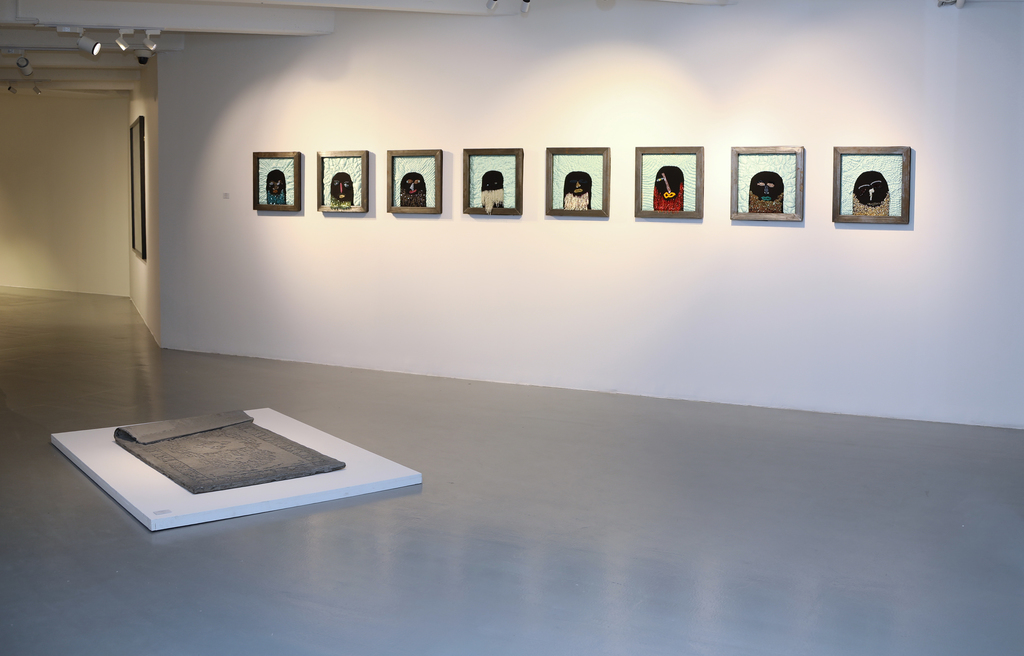 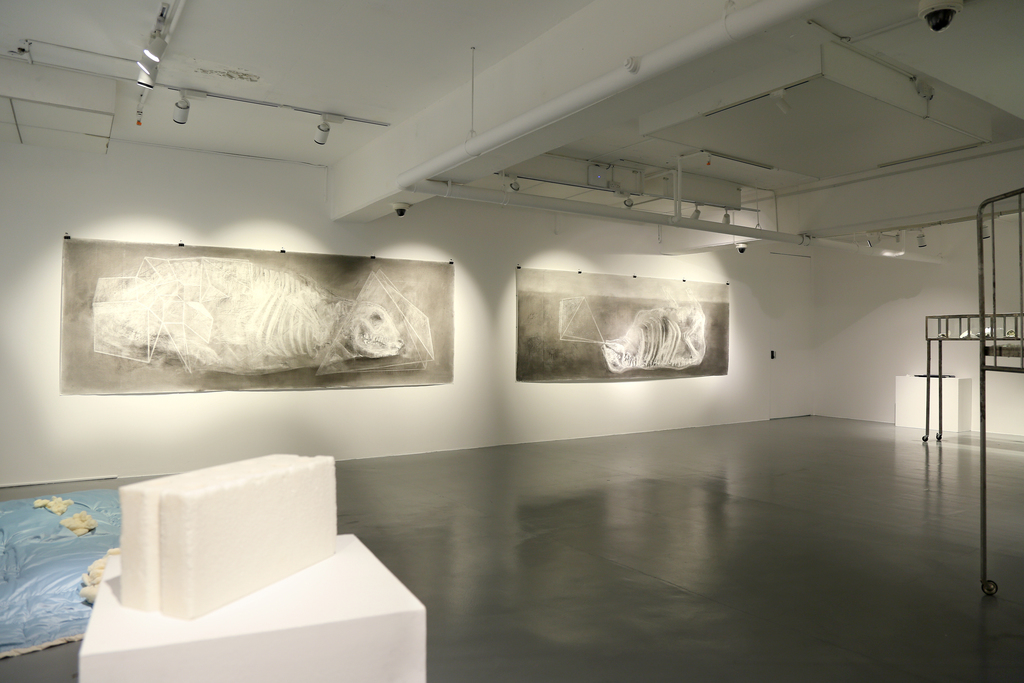 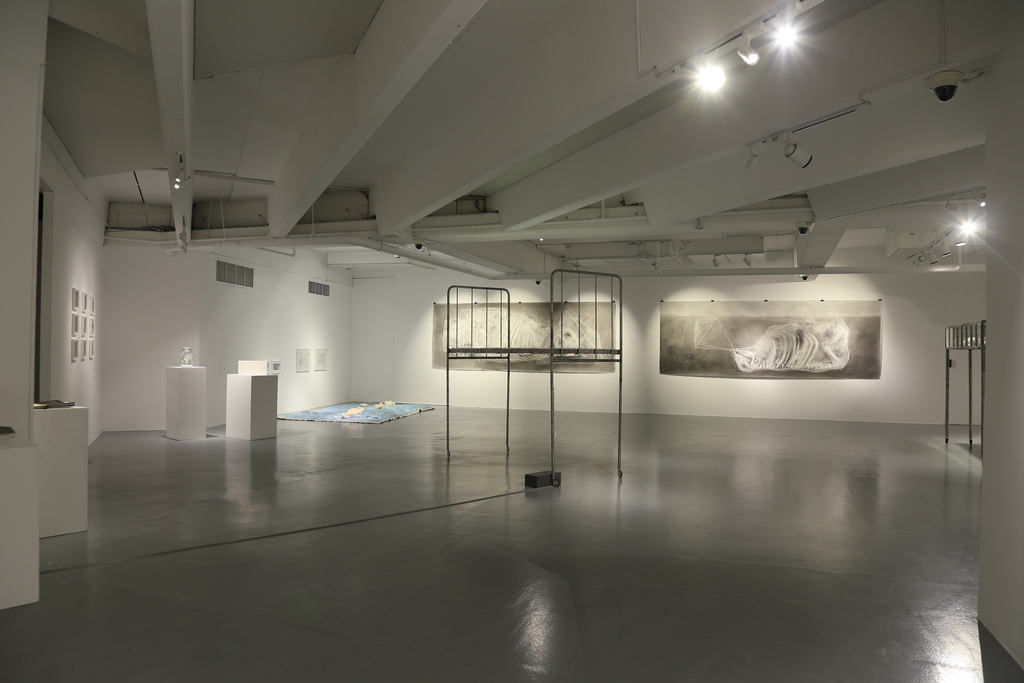 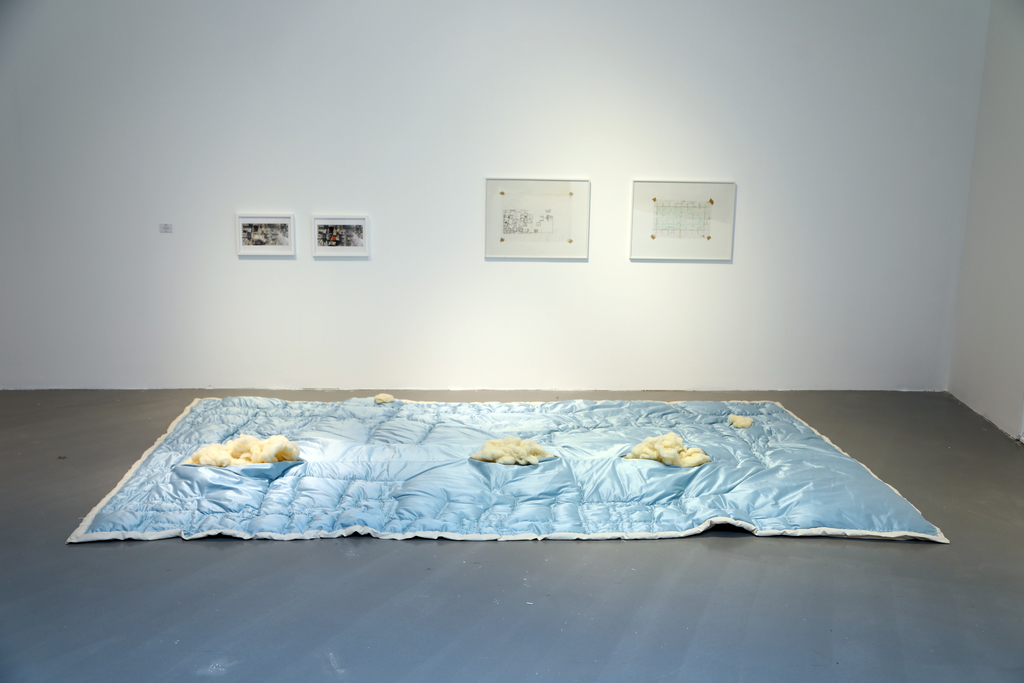 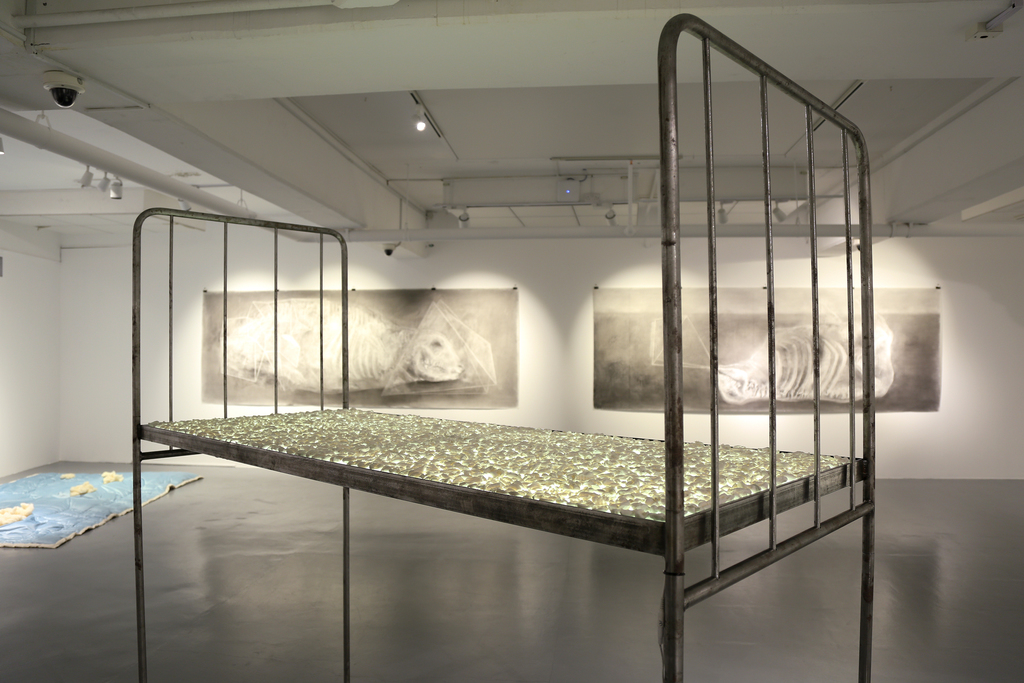 Al-Hamwi and Alansari concern themselves with lending physical shape to the human experience of war. The human figure remains largely obscured in their multi-media practices, as domestic furnishings offer traces of the lack of humanity in the everyday experience of conflict. A dialogue emerges between the two artist’s modes of expression, as common motif and material reveal a parallel and deeply personal process of reckoning. This is the second iteration of Fadi al-Hamwi and Hiba Alansari: While You Were Sleeping, an exhibition which was originally presented at East of Elsewhere at Vardaxoglou in London in July 2018.

Re-imagined domestic furnishings – a cement carpet, a bedframe strung from ceramic teeth – conjure mirages of rooms left behind. Pairs of blank eyes – the cow’s charcoal orifices in al-Hamwi’s Spoils, the featureless face of the figurine in his Artificial Sugar, the beaded clusters in Alansari’s New Dictatorships series – seem to negate their own gaze. While You Were Sleeping suggests the viewer bear witness instead.

The artists direct their attention to the domestic spaces they cannot return to, employing this focal point as a way to process and communicate war as an everyday reality and a persistent memory. Familiar furnishings are re-imagined, altered to expose the experiences they carry. In Irrational loop of dust, al-Hamwi recreates his family’s carpet in concrete, replicating its ornate pattern and rubbing out its places of wear. al-Hamwi draws upon traditional carpet craft and fresco techniques to repurpose the cement that surrounds the Damascus city-dweller as building and as rubble. Alansari also teases out the potential in familiar material, using a light-blue duvet cover and beads in New Dictatorships. This series of obscured faces – at once menacing and alluring – also play with the material expectations and possibilities of portraiture.

These charged domestic pieces evoke the tension in an infiltrated private sphere, where reimagining as art object reclaims space for private reckoning. The recurrent figure of the bed becomes a particularly salient mode of expressing a political rendered personal, as war transgresses every threshold. Attentive to the way material holds memory, While You Were Sleeping gestures towards the latent energy and experience contained in everyday objects. Rendering traces of personal experience tangible, Al-Hamwi and Alansari coax a process of reckoning into striking, palpable form.

About East of Elsewhere

East of Elsewhere is a curatorial collective focusing on site-specific, time-specific presentations. Founded as an exhibition space in an East Berlin apartment in 2017, East of Elsewhere hosted a series of exhibitions, salons and an artist residency. Created to foster an intimate experience of contemporary art, the project exhibits emerging artists with an emphasis on experimentation. From summer 2018, the project started to also curate exhibitions elsewhere including in London, Venice, Turin and Leipzig.