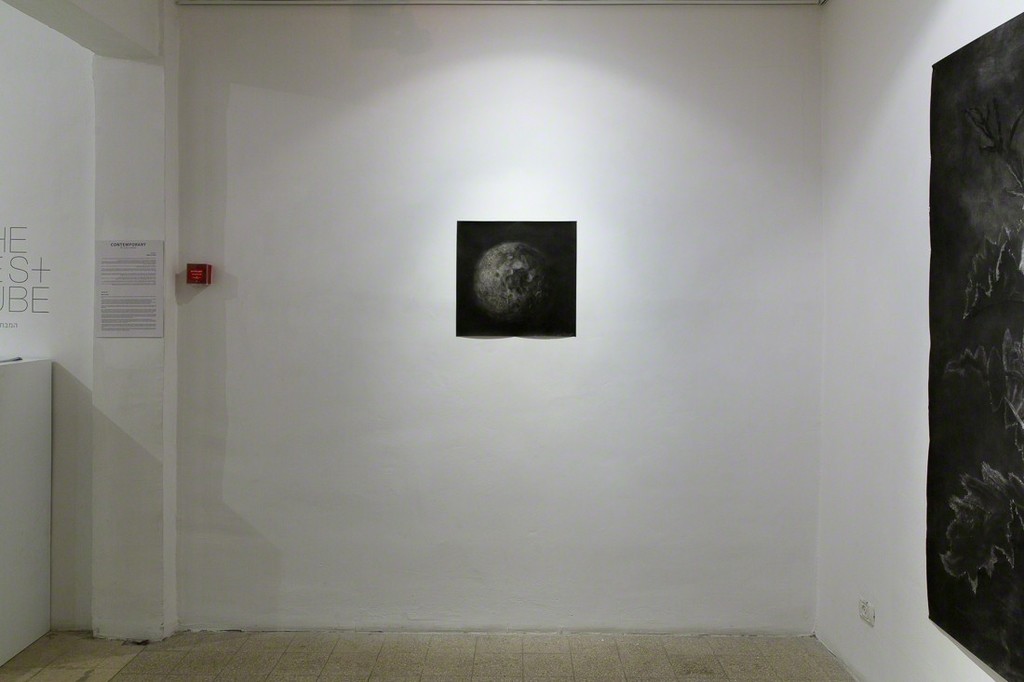 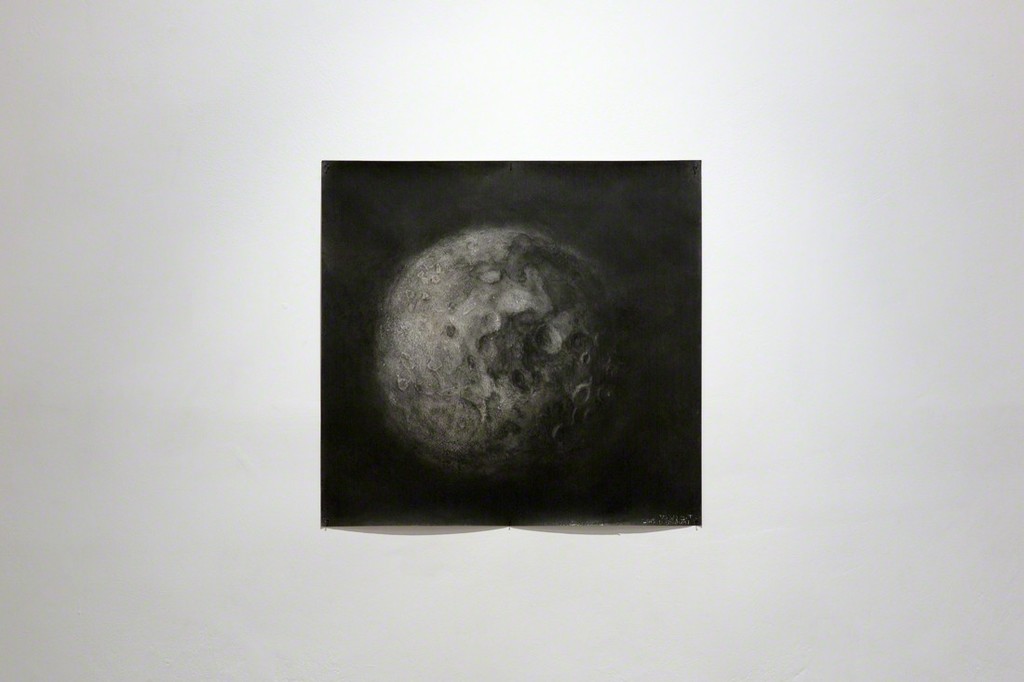 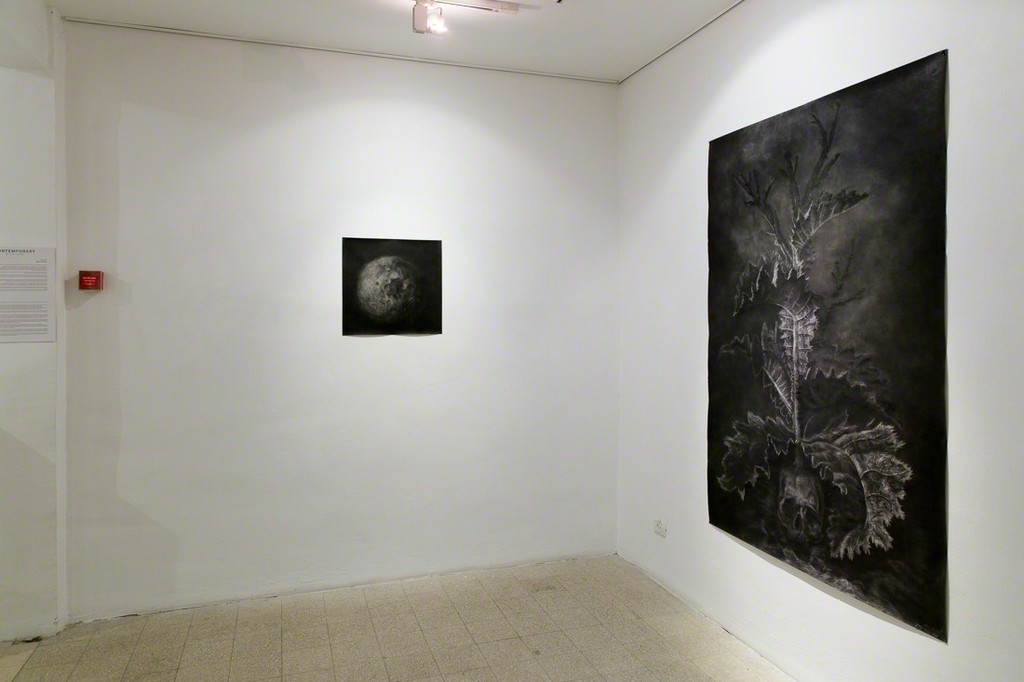 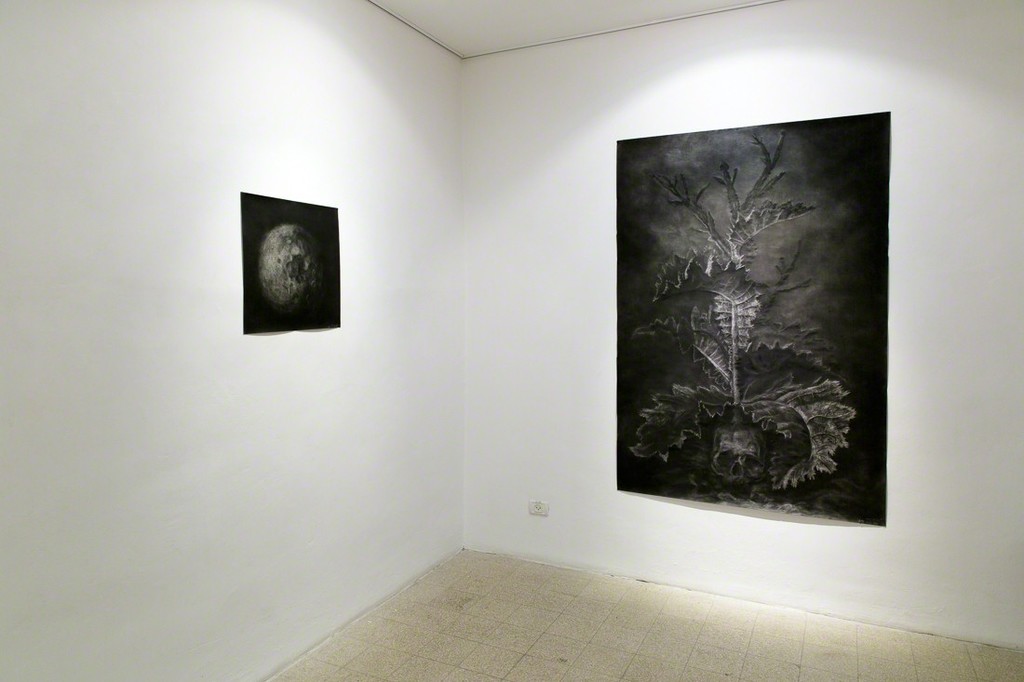 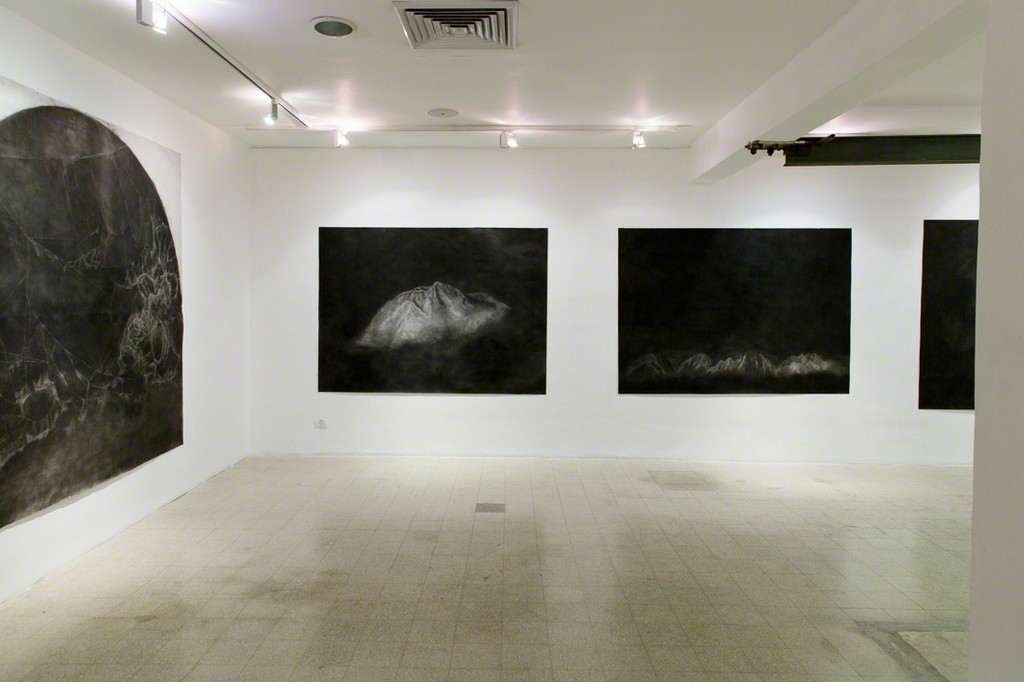 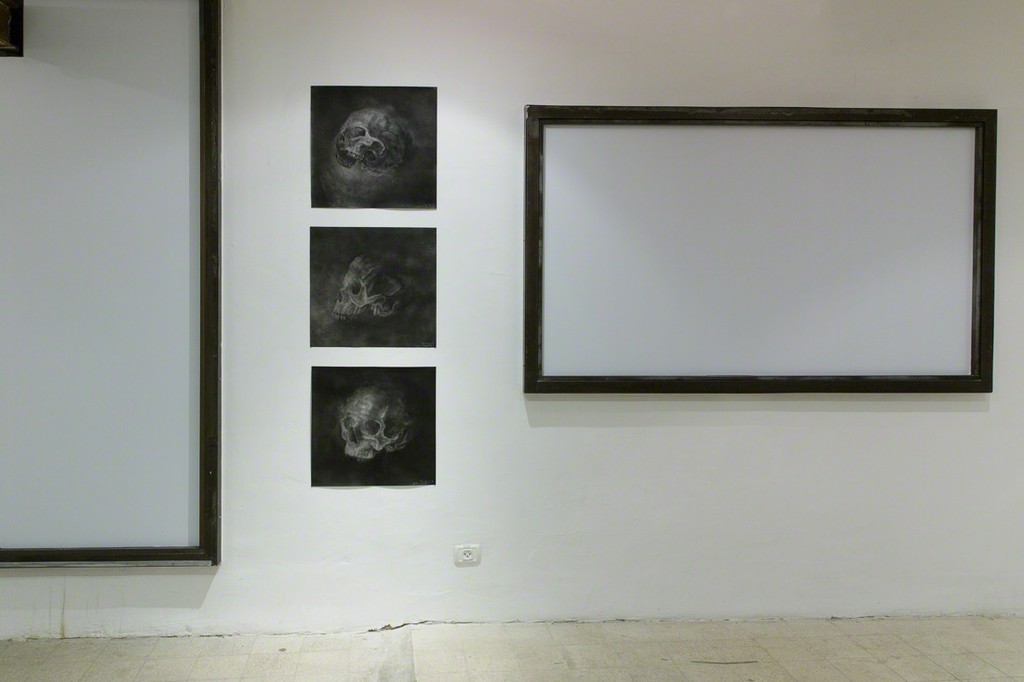 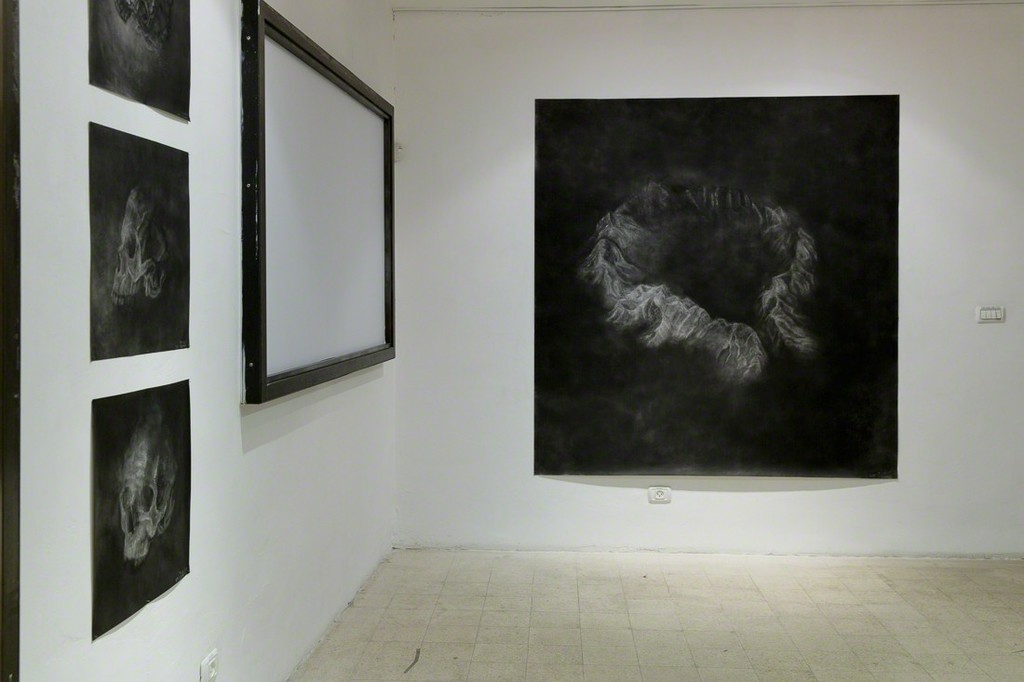 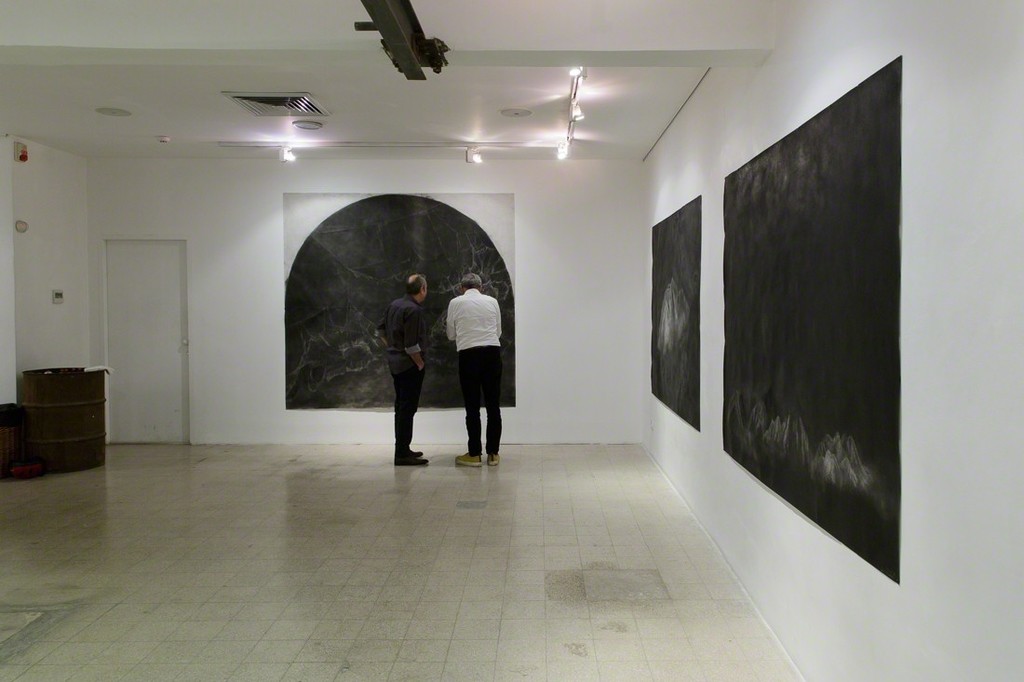 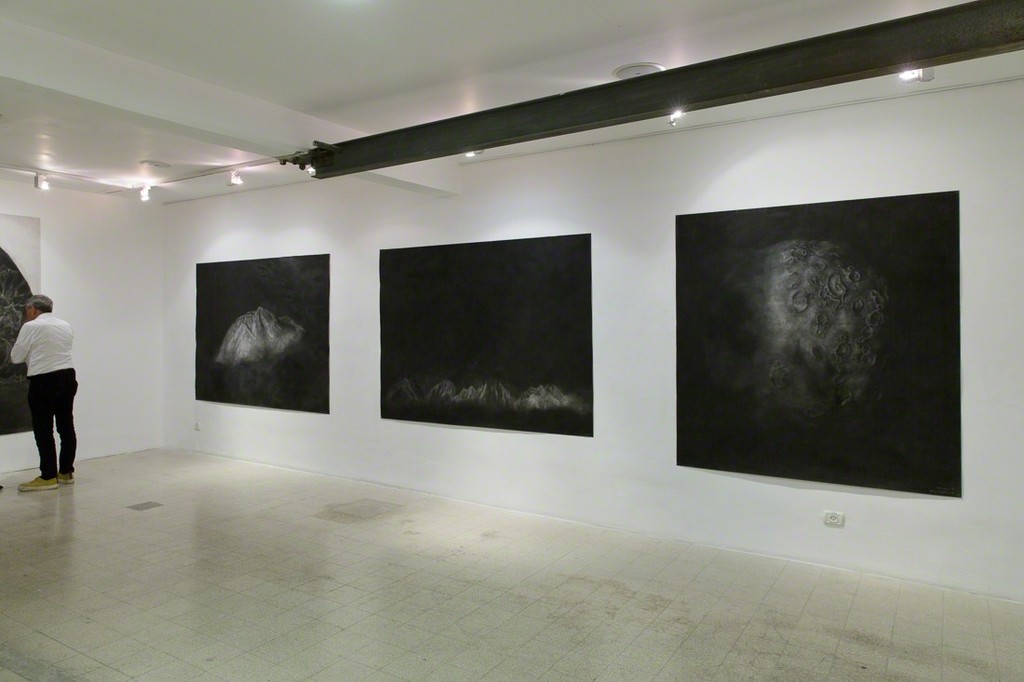 Dror Ben Ami (b. Israel, 1956), studied at the Rijks Academy, Amsterdam, where he acquired the rudiments of academic painting and drawing on which his work is based.

In recent years Ben Ami has been making all his works on paper, in techniques based on drawing materials, mainly various kinds of charcoal. Despite the distinct characteristics of drawing, such as paper and charcoal, these large-scale works, steeped with great materiality, can essentially be considered as paintings.
The choice not to use colour, or to use black as the only colour for distinctly colourful subjects such as butterflies, flowers or landscapes, is a conceptual one.
In nature, colour serves as an externalized element used for luring or deterrence. By eliminating this dominant visual element, Ben Ami brings to the fore different qualities such as textures, inner forms, decorative rhythms and delicate and fragile layers that are barely noticeable under the “dazzling” cloak of colour.

Ben Ami’s creative process begins with an investigative and meticulous observation of nature; the structure, the form and the texture. Observing the physicality of things leads to an emotional insight about the essence of beauty: the delicacy, the brittleness and the vulnerability that eventually lead to disintegration and disappearance.

There is a paradox between the visibility of the heavy charcoal marks and the universal subjects that populate the works, and the transience and frailty of the simple paper on which the artist works. In Ben Ami’s works, existence is at once corporeal and incorporeal. The painting is a space in which signs of life appear and gradually dissolve. Ben Ami works with very simple paper, which he scratches, perforates, covers with a layer of charcoal, and erases. The result is a fine line that highly resembles etching. Ben Ami replaces the line of traditional drawing (pencil, charcoal, ink) by physically engraving into the body of the paper with a sharp needle.

A careful scrutiny of the drawing will reveal a dense array of hatchings that are engraved-imprinted onto the paper’s surface. At times Ben Ami retraces these etchings with charcoal, which penetrates into the grooved paper and creates dark formal structures against a light background (the white paper), and at others the background is dark (layers of charcoal) and the artist engraves onto it, exposing illuminated shapes out of the surface darkness. These works convey an expressive world of forms in a wide range of textures and a rich spectrum of monochromatic tones of blacks, whites and greys.

This technique is in fact taken from the world of traditional engraving, in which the artist uses a sharp metal pencil to etch into a hard surface (copper, zinc).
The idea of working in this technique originates in the influence of the Old Masters, especially Rembrandt and Goya, as an additional means of expression beside oil paintings. Another visual source of influence is the “scientific” engravings that developed in Europe in the 18th and 19th centuries, documents of plants and animals resulting from detailed observations from the point of view of a natural scientist.

The subjects that Ben Ami deals with are timeless and limitless: life and death, materiality and destruction, beauty and emptiness. The painterly experience is detached from the experience of the “here and now” and floats between the conscious and the unconscious. This aesthetic language yields a statement about the world which, while ostensibly objective, is distinguished by unique style and beauty that lend these illustrations a character and a poeticism that attest to the artist’s inner spiritual world.
The tension that arises between the point of departure of the “objective” human observer on the one hand, and the creation of a subjective aesthetic on the other, raises a question regarding the essence of the human gaze on the world we live in, or in other words: the physical facts that they eyes perceive in relation to the emotional material which we bring with us and with which we experience these worlds.