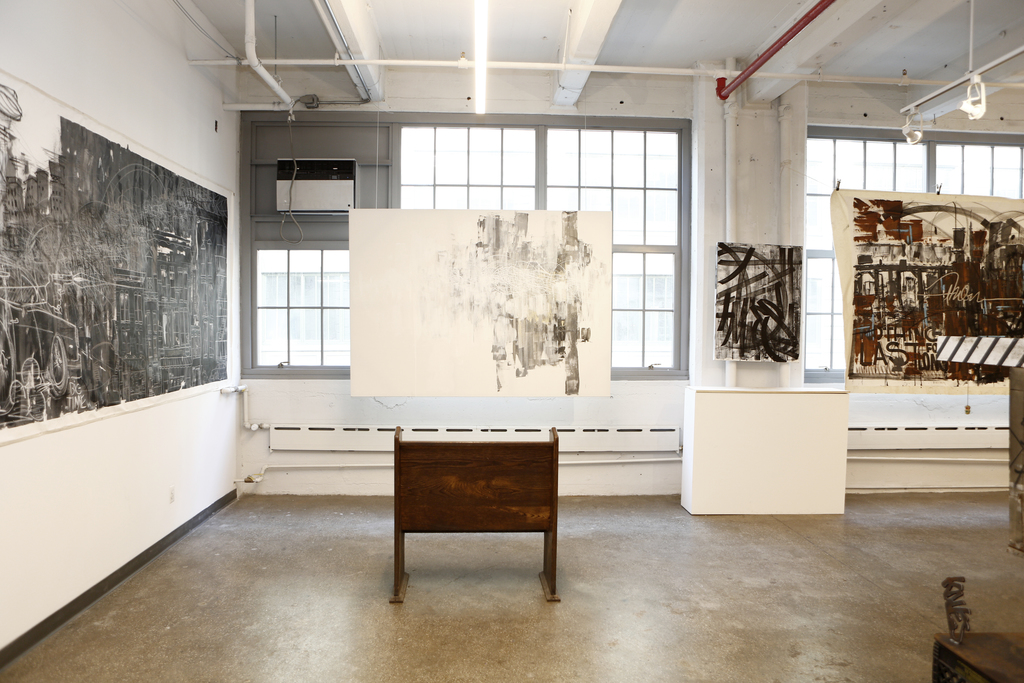 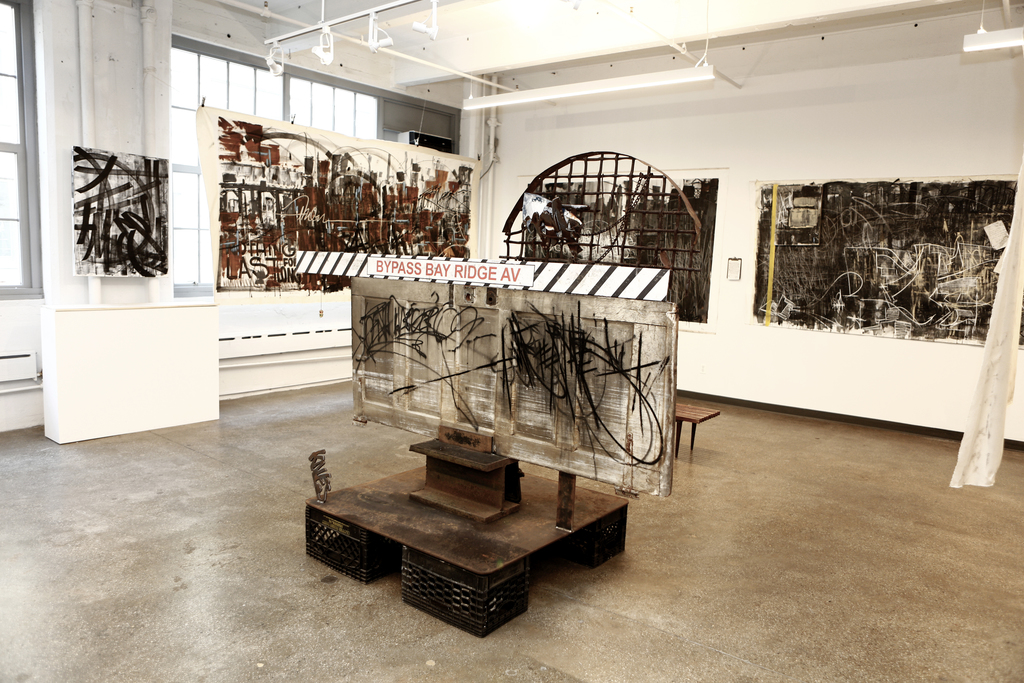 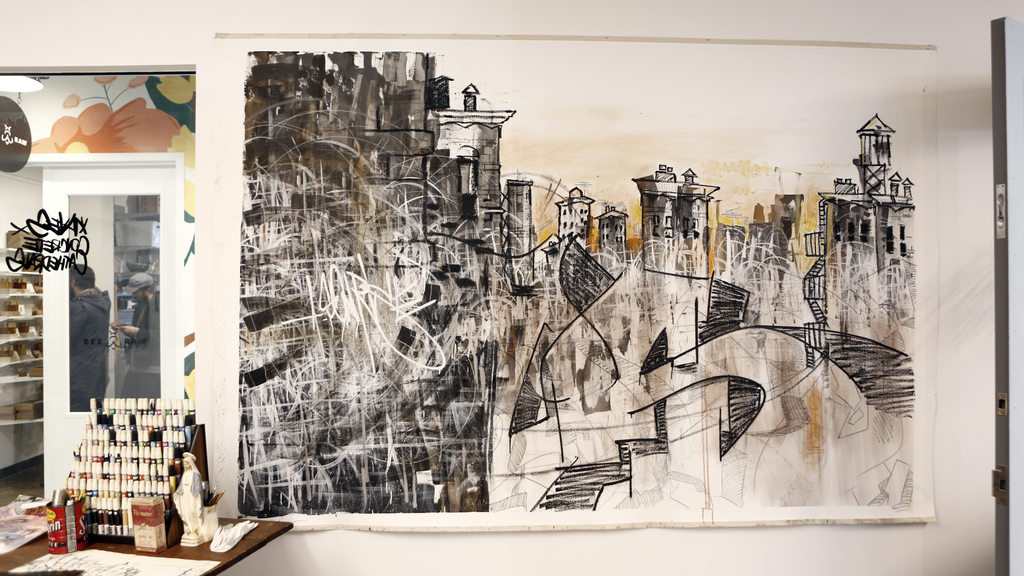 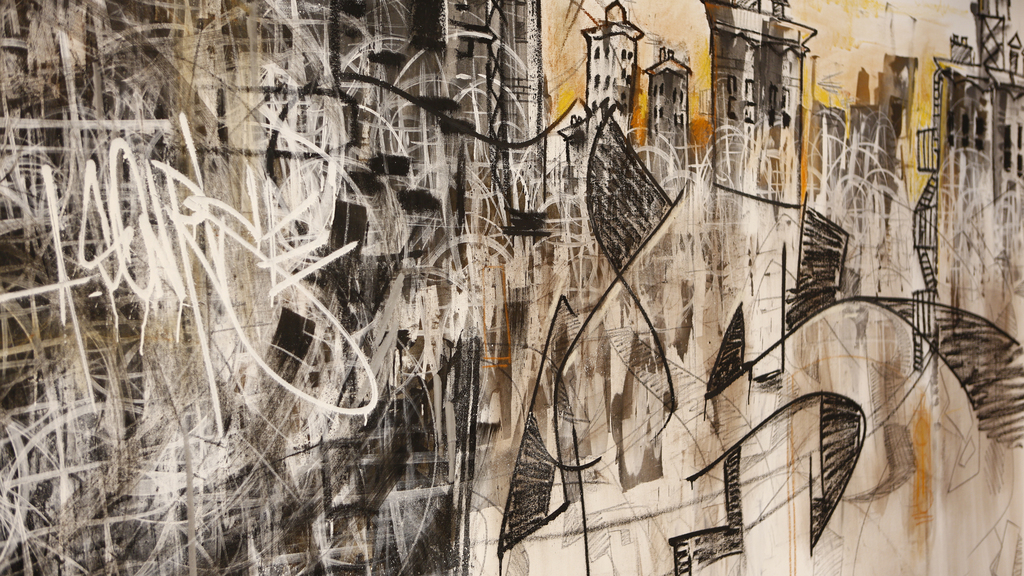 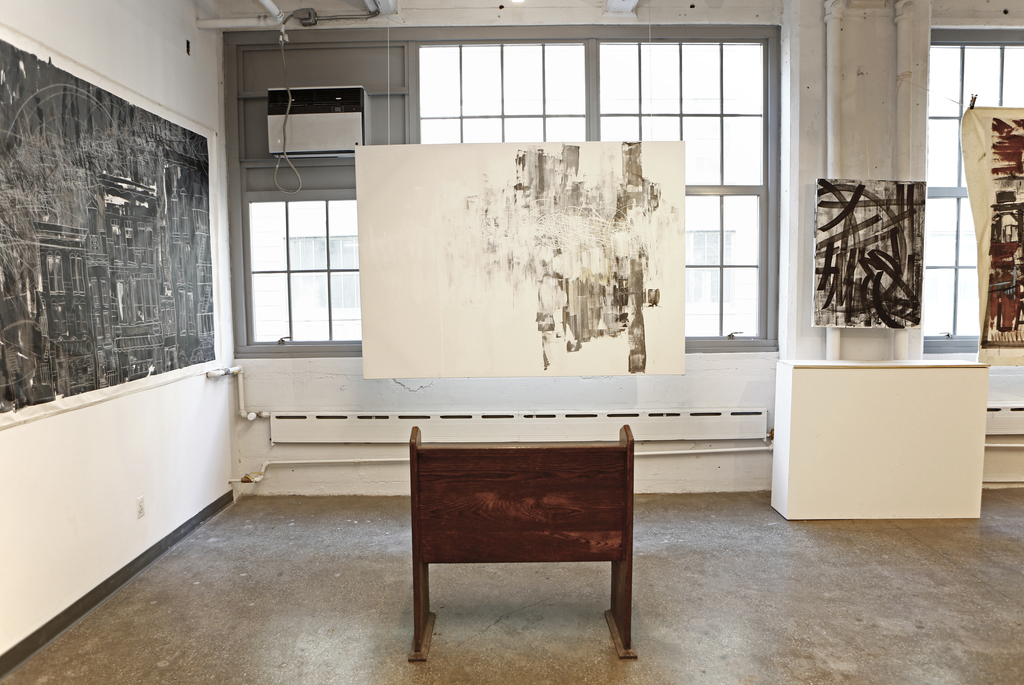 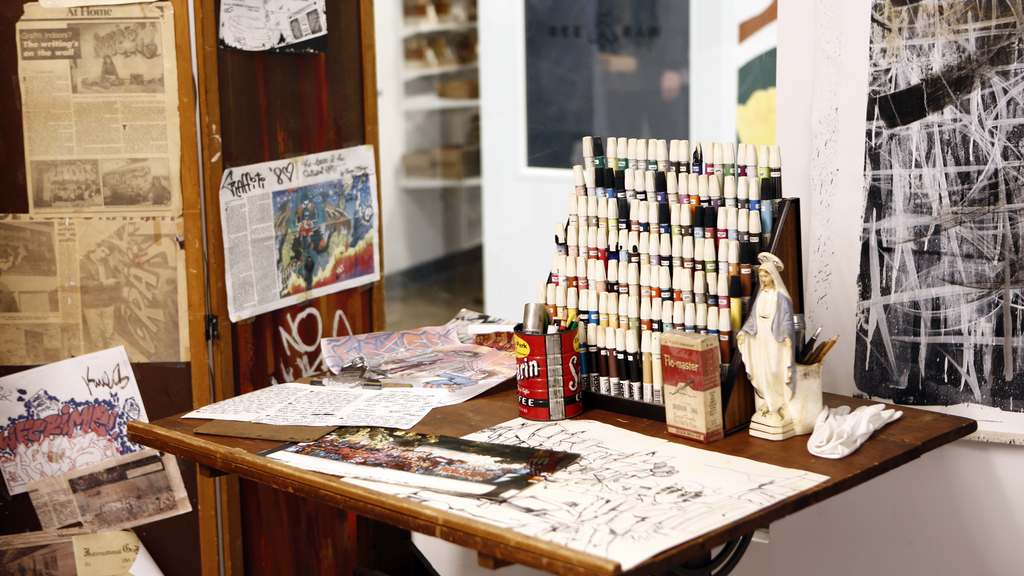 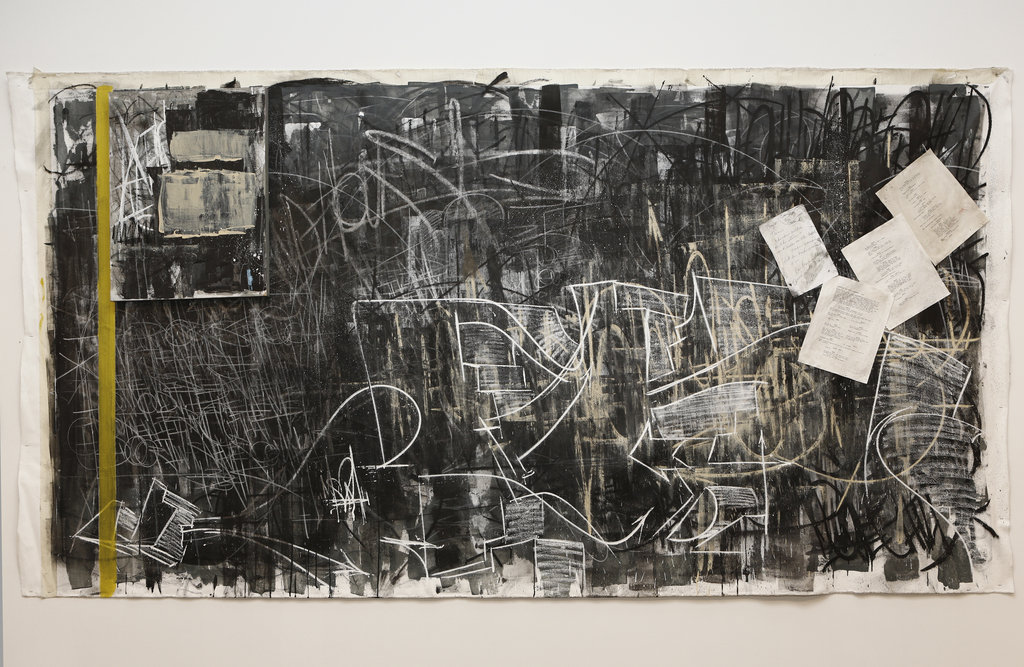 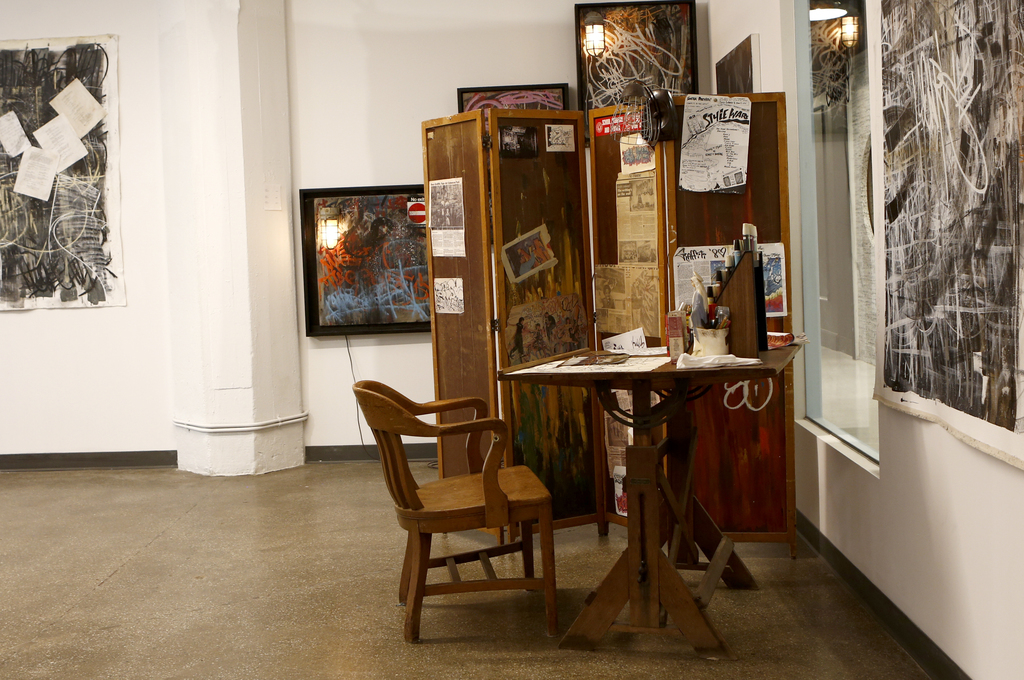 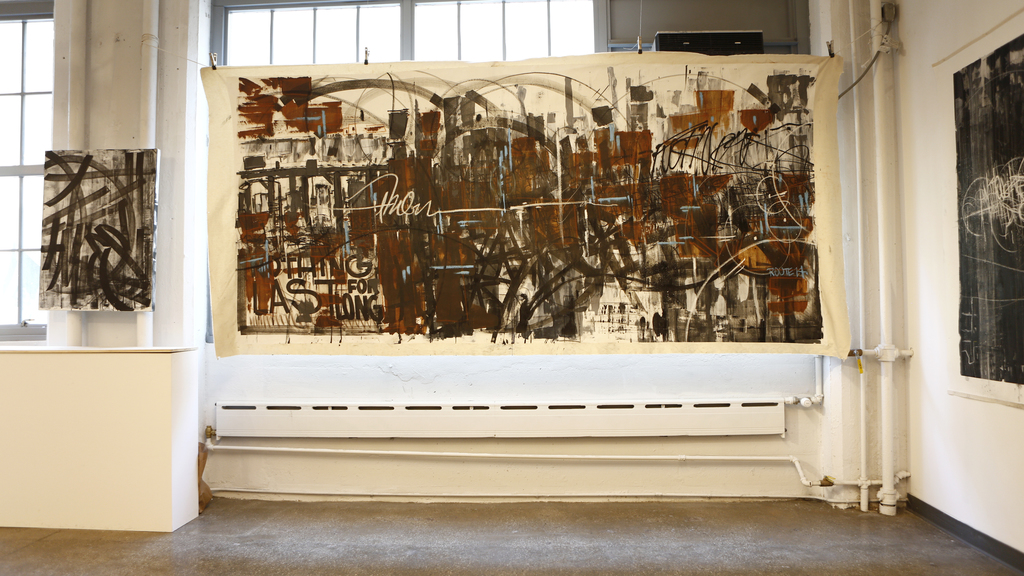 Michael ‘KAVES’ McLeer is a man of faith.

For McLeer (b. Brooklyn, 1969), faith and spirituality are derived not from a theistic higher power but from
a rich fabric of personal memories firmly anchored to a sense of place. That place has always been but one:
Brooklyn. McLeer’s work has continually been inspired by the crumbling, many-faced Brooklyn of the 1970s and 1980s in which he was born and raised.

McLeer has carried memories of this place in time and spent years recounting them as a kind of folklore
through the formats of graffiti, music, and painting. He began making artwork in his early teens illegally
spray painting subway trains, buses, and handball courts. This instilled in him a tendency of capitalizing on
bold lines, high contrast, and fast mark-making. Graffiti also functioned as a form of storytelling and social
commentary. It was a citywide bulletin board, a system of communication, and a platform for the youth for
the development of individual fable.

This tradition culminates here. Frenetic blacks, whites, and grays pulsate across sheets of canvas. Closer
inspection reveals they are formed by words and sentences. McLeer mines memories and scrawls their
impressions in mantra-like repetition. He urges us and himself to give in to discord; revelations often lay
under the surface. The series of gestural vistas conveys the solace that was to be found in the brick and
concrete labyrinth of McLeer’s childhood neighborhood of Bay Ridge. Urban decay had become a forest of
unexpected beauty and solitude. Contained within it were both the claustrophobic quarters of working-class
apartment living and the sprawling mazes of girders underneath the Verrazano Bridge- a makeshift
playground for trespassing neighborhood children. The enormous inner chambers of its anchorages
swallowed them- vast industrial caverns, unidentifiable ceilings fading into darkness. Shadowed walls were
canvases to practice painting with a spray can. Its narrow catwalks, shuddering with passing cars and
suspended hundreds of merciless feet above water, became a jungle gym from which to steal pigeon eggs.
Larger than life was the world around them. Faraway views offered by apartment building rooftops thrust
upon them a sense of scale and a possibility to thrive beyond socioeconomic oblivion. Subway trains were
steel behemoths from which to learn the letterforms of graffiti- a Sunday school scripture.

In this seminal group of new works, McLeer is at once the fable-weaver sitting at the fire and the
parishioner praying at the pew. The series is meditative both in its method of application and in its function
of purging through visual storytelling. It is the result of recollecting a youth spent within concrete
cathedrals, and recounting the mix of real and mythical which accompanied it. In this world, local legends
were martyrs and deities. Daydreams and artistic expression were salvation. McLeer’s body of work has
routinely endeavored to recount these experiences as both folkloric on the one hand, and on the other,
intrinsic to the historical fabric of Brooklyn. From his youth writing graffiti, to his years of songwriting and
performing hip hop, to the current era, McLeer has often addressed personal tragedies and joys of urban life
and related them as part of the greater narrative of a city.

McLeer lives and works in Brooklyn, New York. His work has been featured in the Gunter Sachs Museum of Fine Arts in Germany, the Rock and Roll Hall of Fame in Cleveland, Ohio, The Blackstone Hotel in
Chicago, Illinois, as well as Henry Chalfant’s acclaimed 1984 book Spraycan Art and countless other graffiti
books.