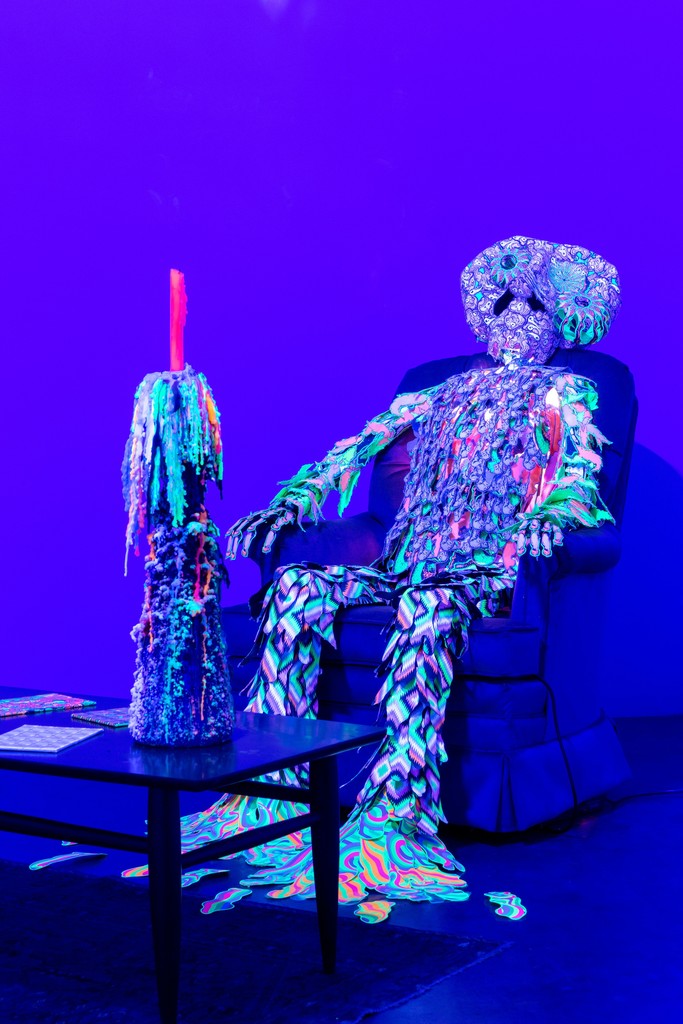 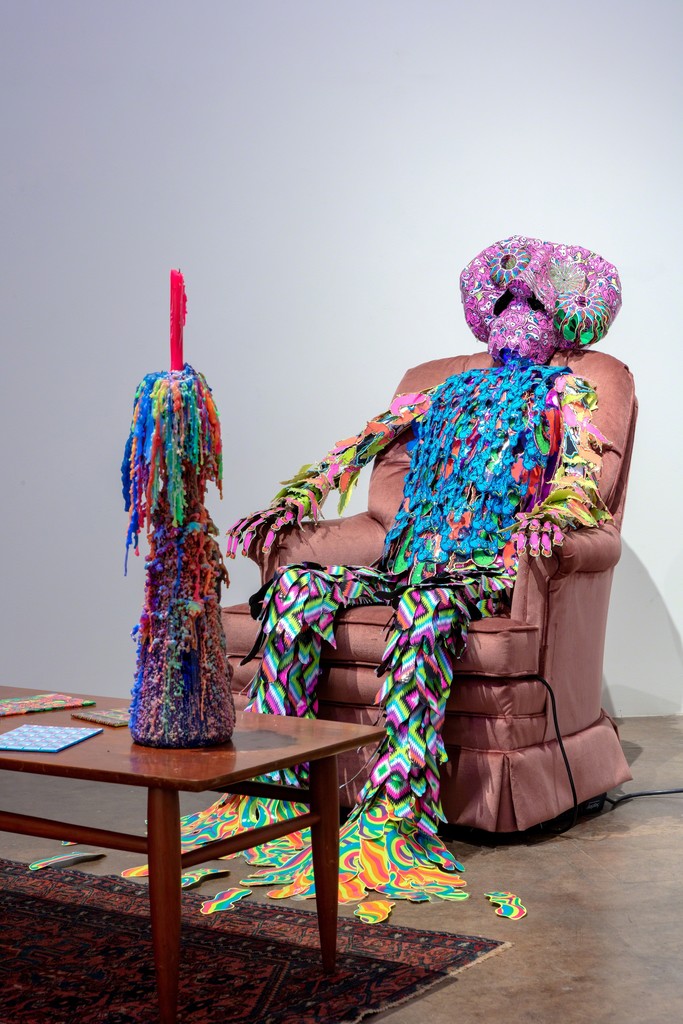 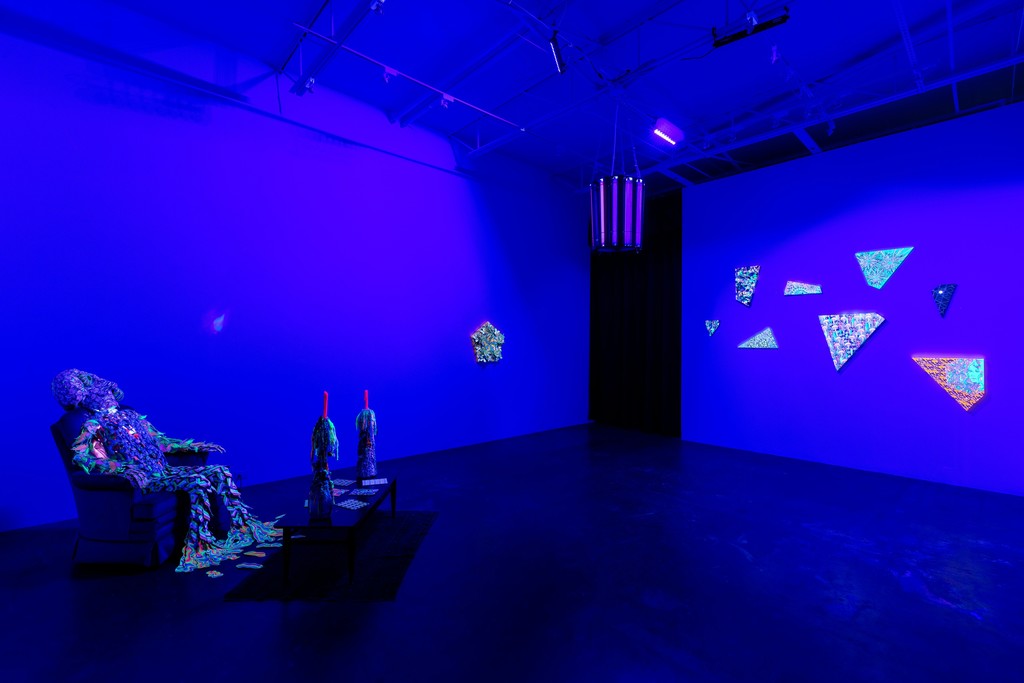 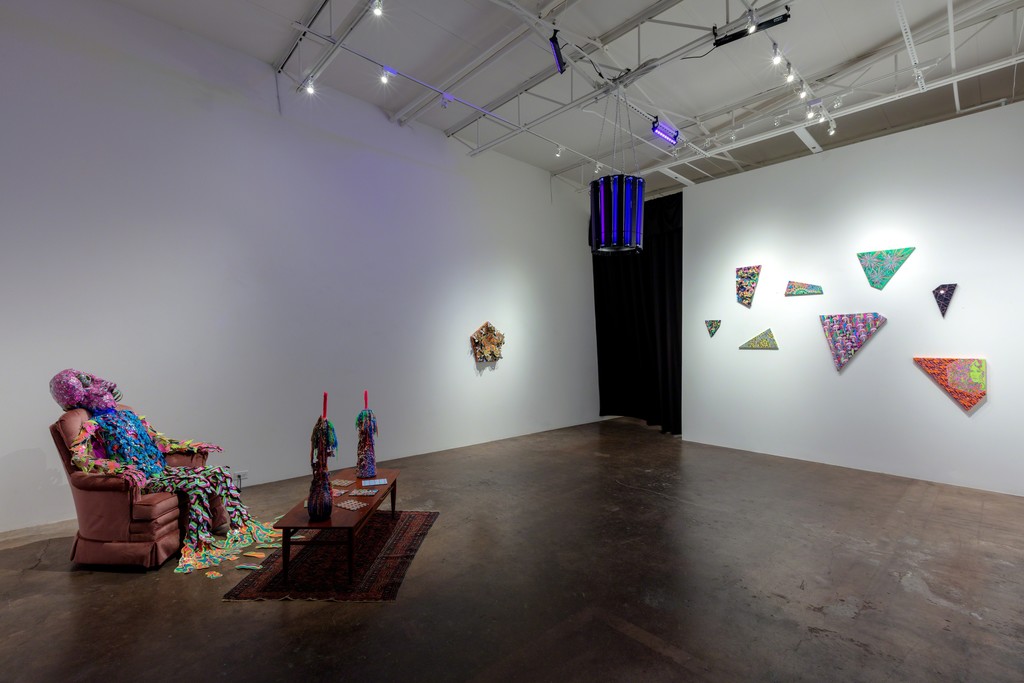 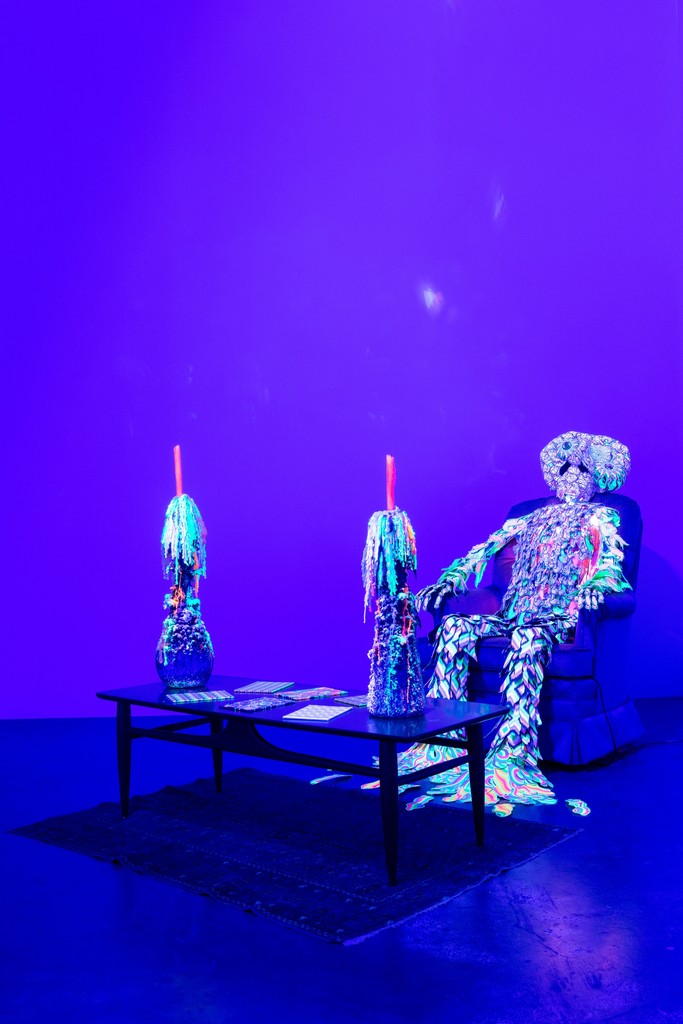 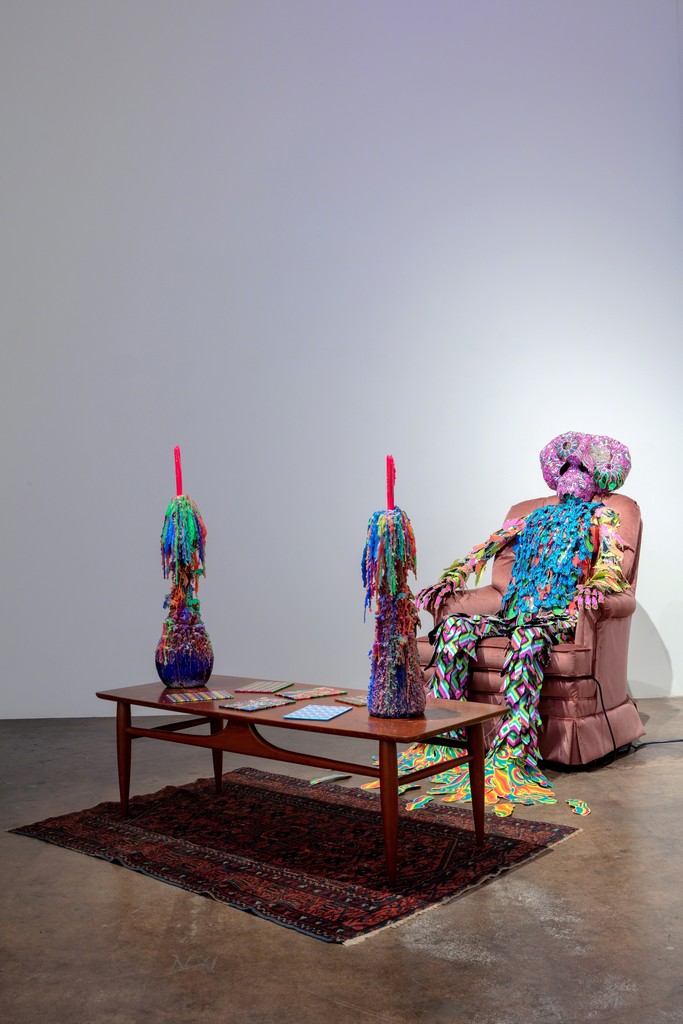 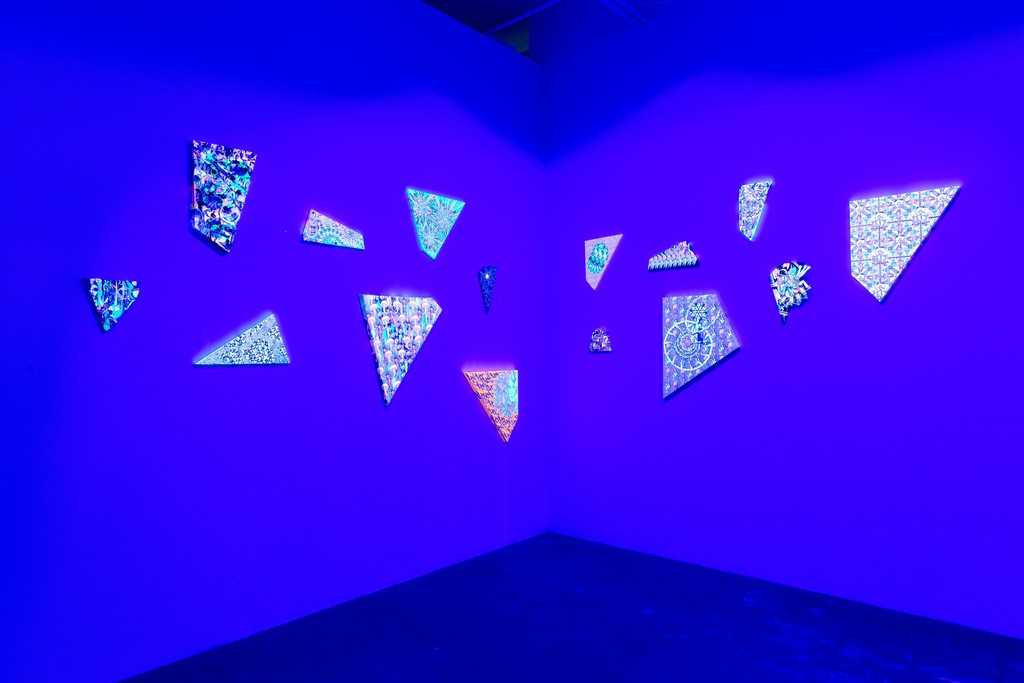 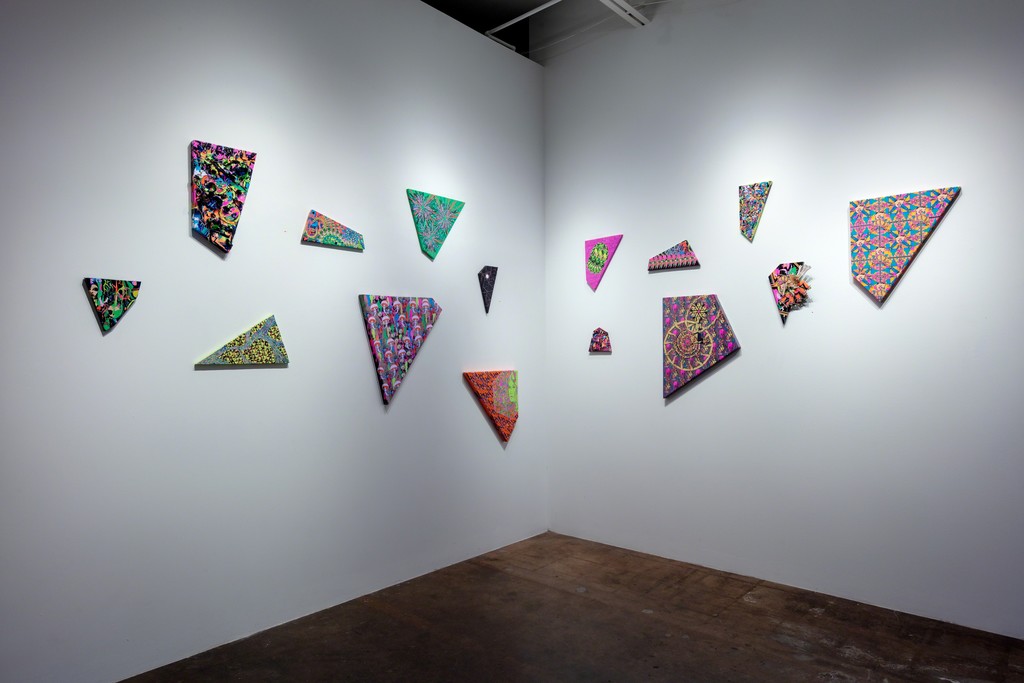 Cris Worley Fine Arts is pleased to announce our second solo exhibition with Patrick Turk, entitled Trip Harderrr, opening with an artist’s reception on Saturday, June 30th from 5:00 to 8:00pm. The exhibition will feature twenty new mixed media sculptures with an additional installation, to be seen under ultraviolet light. This exhibition has traveled to Dallas from Houston, where it showed at Apama Mackey Gallery. Trip Harderrr will be on view in Dallas through August 18.

Turk is known for his highly imaginative collages, assembled using illustrations from printed media sources with botanical, commercial, medical, mythical, and religious subjects. The artist’s work is often described as a visually dense and destabilizing microcosm of cultural artifacts and natural forms encased in resin. Organic and unsettling, his work utilizes a bewitching visual vernacular chosen to question the nature of collecting and ordering our existence.

The title of the exhibition is a direct reference to the powerful cognitive effects of psychoactive substances, which blur consciousness to create ecstatic, metaphysical, and phenomenological experiences. As might happen in altered states, despite rich candy colored facades, experiences can carry potent truths about personal beliefs and actions that effect change. According to the artist, the accompanying installation Uncle Roscoe (2017) calls for viewers to, “observe the relics of its environment,” as it attempts to reconcile the nature of its present existence with future potential. Through trippy representational forms, the artist continues important lines of inquiry found in the work of foundational surrealist artists such as Salvador Dali, Hannah Höch, and Man Ray.

Patrick Turk was born in Galveston, Texas and lives and works in Houston. He was awarded an Artist Grant by the Houston Arts Alliance in 2017, and was an Artist-in-residence at the Lawndale Art Center in 2013. His works have been exhibited throughout Texas in Dallas, Houston, Galveston, Kingston, and Lubbock in addition to Los Angeles, California. He was one of 60 artists included in the 2016 book, The Art of Found Objects: Interviews with Texas Artists (Texas A&M Press), authored by Robert Craig Bunch. His works have been published several times and include commissions such as the 2009 Houston Art Car Parade Poster, and the Philokaliaalbum cover by Golden Cities.