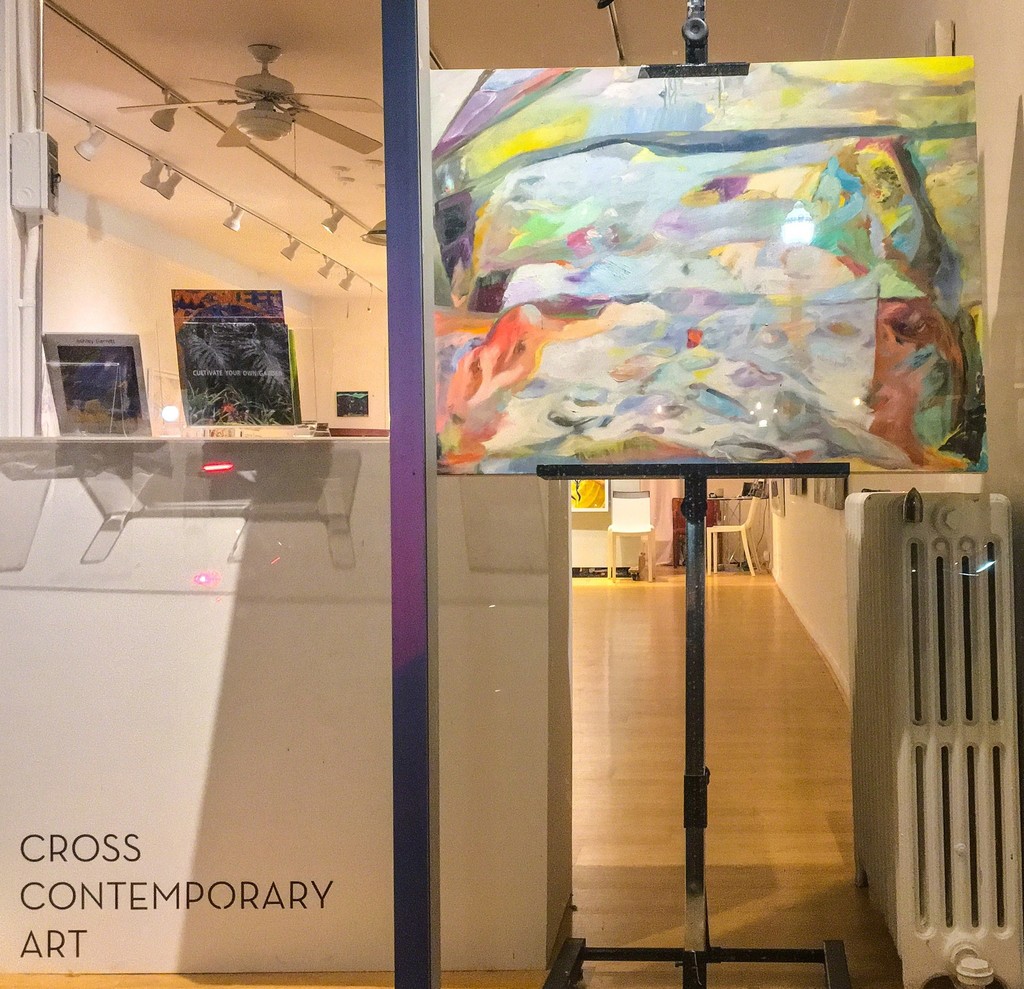 Wild World explores the power of the gestural mark inspired by the natural world. The artists of this show Ashley GARRETT, Catherine HOWE and Lily PRINCE all paint with a distinctive gestural calligraphy. Catherine Howe's monotypes assert bold, botanically-inspired forms while Lily Prince's watercolors exhibit a hypnotic, vibrating brushwork that walks the tightrope between light and color. Ashley Garrett's oil paintings combine calligraphic elements with deep, mysterious spaces conjuring up the ambiguity between "inside" and "outside" the self. United by the bravura of the artistic hand, these paintings, prints and watercolors by these three artists boldly express the subtle strength of nature and the ephemeral power of the brush.

About Ashley Garrett:
Ashley Garrett graduated from The School of Visual Arts (BFA 2008) and has had many exhibitions nationally including New York City, Brooklyn, Los Angeles, CA, Dallas, TX, West Hartford, CT, Honolulu, HI, and Great Barrington, MA, and internationally in Greece, Vancouver, Copenhagen and Oslo. Her work has been reviewed in the online journals Painting is Dead, Gorky's Granddaughter and Arts in Bushwick. Extending her painting practice, Garrett has curated exhibitions in New York and Los Angeles that have been that have been featured in Art in America, Hyperallergic and NY Observer. Her writing has included interviews with artists such as Katherine Bernhardt, Ann Craven, Judith Linhares, and Brenda Goodman for the online journals Figure/Ground and Whitehot Magazine discussing their art and studio process.
About Catherine Howe:
Catherine Howe received an MFA from SUNY Buffalo in 1983. She has been reviewed in many publications including Art in America, Artforum, Art Critical, The New York Times, The New Yorker, and the Los Angeles Times. For over twenty years, Ms.Howe has exhibited throughout the United States and Europe including shows at the Corcoran Gallery of Art in Washington, DC, MoMA PS 1 in New York, and the Albright-Knox Art Gallery in Buffalo. Catherine Howe is on the faculty of the New York Academy of Art and is represented by Winston Wachter Fine Art in New York, NY.
About Lily Prince:
Lily Prince has her B.F.A. from The Rhode Island School of Design, her M.F.A. from Bard College and attended Skowhegan. Prince has exhibited widely both nationally and internationally. She has been awarded commissions including the New York City Department of Cultural Affairs. She was Artist-in-Residence at historic site Olana and was chosen for Draftsmen’s Congress at The New Museum. She was awarded a residency at the BAU Institute, and returns to plein air draw in Italy. Prince’s work has appeared in the New York Times, New York magazine, The Brooklyn Rail, and New American Paintings. Lily has done the artwork for 2 published books. The Paterson Museum published her drawings The Ten Plagues. Prince has lectured at Yale, Vassar, Cornell, RISD, SVA, and Pratt. Lily is an associate professor at William Paterson University. Prince is represented by Thompson Giroux Gallery in Chatham, NY and Littlejohn Contemporary in New York, NY.