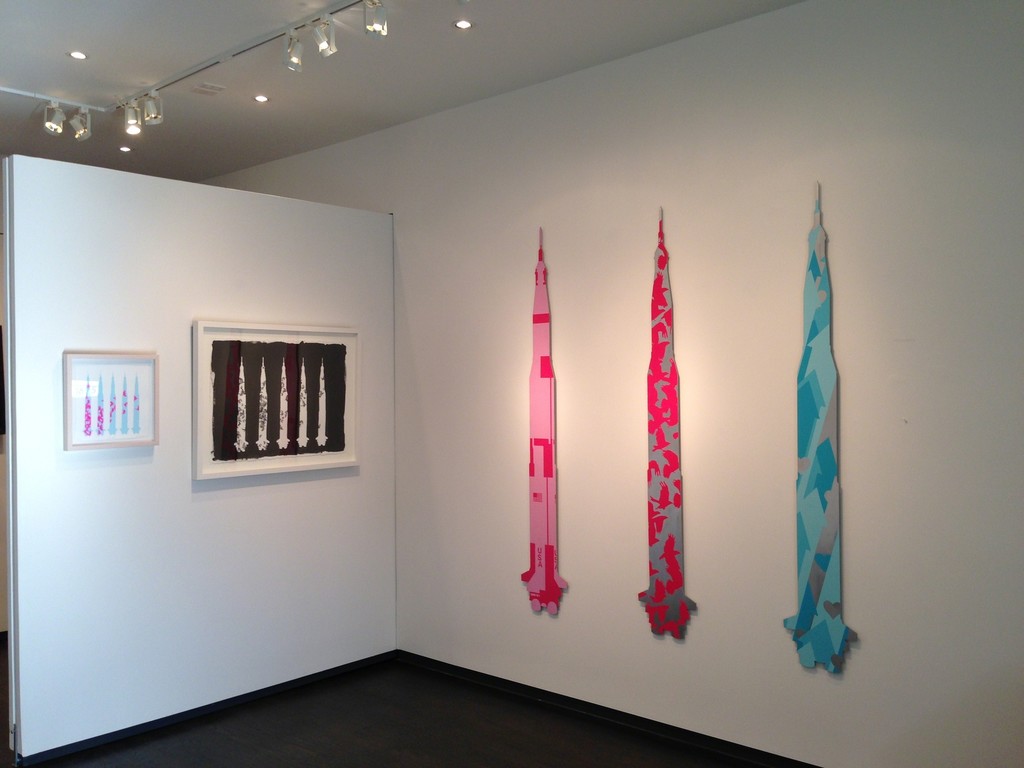 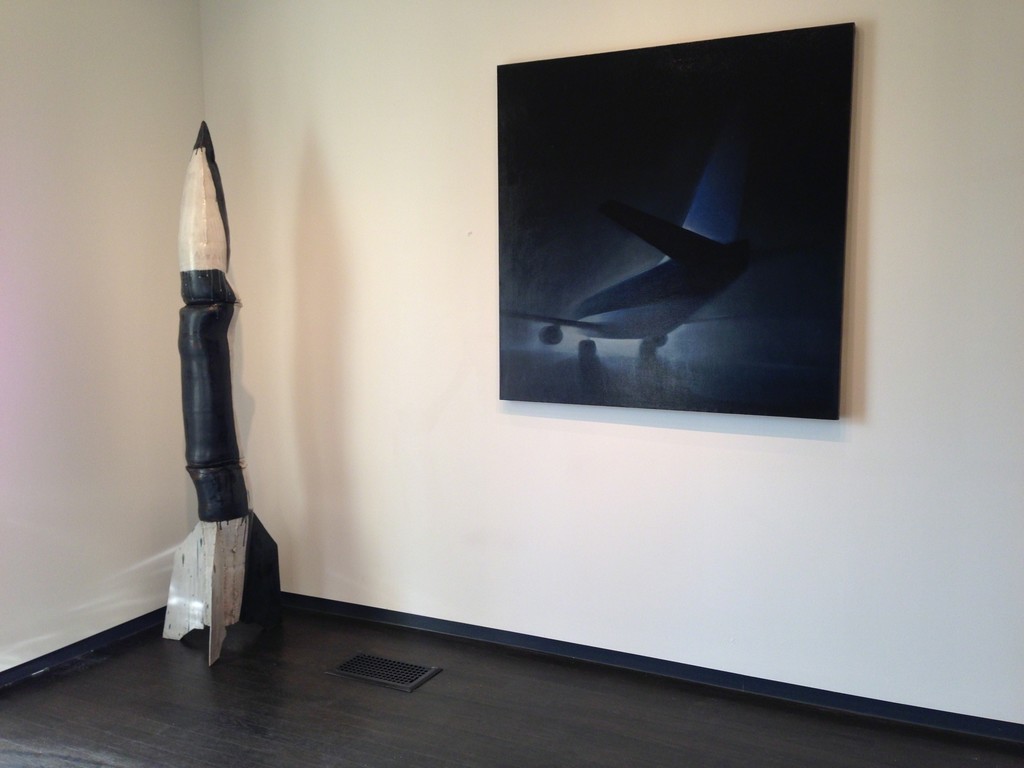 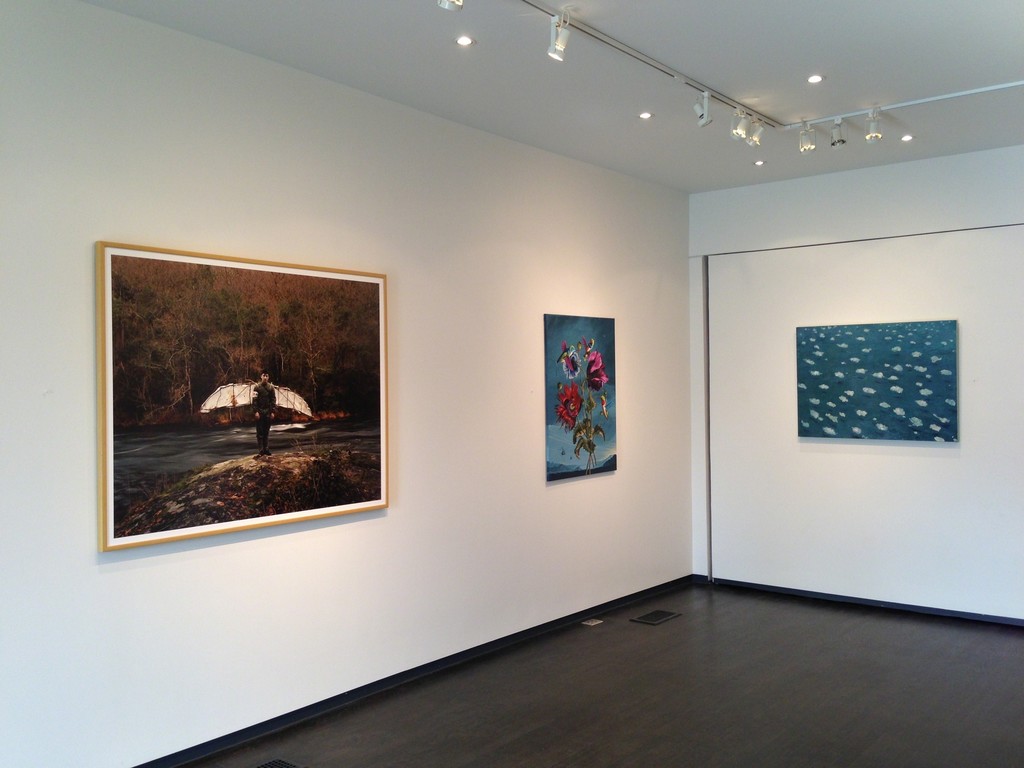 The dream of flight, and art inspired by that desire, is as ancient as the Greek myth of Icarus from 1700 BC. In 500 BC, Chinese inventor Lu Ban and the Greek mathematician Archytas, as well as others, invented flying machines. In the Renaissance, Leonardo da Vinci’s drawings of his “aerial screws” or helicopters and hang gliders were extraordinary works of art in themselves as were the fanciful flying ships in the paintings of Hieronymus Bosch. Art inspired by actual mechanized aviation, has followed its development ­– from colorful French prints of ballooning in the 18th century – to the present day artists exploring the most advanced technology of drones.

(Defense Advanced Research Projects Agency) or, DARPA’s seemingly futuristic, miniature hummingbird “nano-drones” are the inspiration for Montana painter, Philip Slagter’s fantasy paintings of insects in the garden. Scary as this actual big-brother scenario is, Slagter’s paintings of drones are the picture of happiness with brightly colored winged insects buzzing across the canvas. This Eden-like portrayal disguises their true ominous nature – a most relevant topic in today’s news.

On the opposite spectrum, Switzerland-based, Japanese photographer David Favrod, makes a powerful statement with a portrait of a Japanese soldier wearing make-shift, strap-on wings, as part of his “Hikari” series, where he explores his own interpretation of his Japanese grandparents’ memories of WWII. This photograph titled “Vent Divin” or “spirit wind” the meaning of the Japanese word “Kamikaze” symbolizing the victory of the spirit of Japan, is depicted poignantly ­– not soaring – and clearly not triumphant.

Two of our artists focus on the infrastructure behind the romantic images of man pursuing the wild blue yonder. Renowned painter Trevor Young is represented in the show with one of his eerie, dark, night paintings of a jumbo jet docked on the empty runway. Young’s exquisitely painted oils fly no matter the subject. DC photographer, Maxwell MacKenzie was piloting his own ultra-light while photographing the Burning Man Arts Festival in Nevada. The aerial view of the harsh, desert landing strip at dawn, reveals a magical field of sparkling aircraft in silhouette and hints at the ordered chaos beyond the fence.

Biddle/Frankel is the collaborative effort of husband and wife duo from Brooklyn, Eve Biddle and Joshua Frankel. Their printed aluminum and silkscreen rocket ships playfully reference flight with their birds and upward-pointing arrows. They like to mix the image of the most sophisticated man made gravity-defying space ship decorated with the naturally aerodynamic common sparrow.

“We believe in the possibility of an incalculable number of human transformations, and we say without smiling that wings sleep in the flesh of man.” - F.T. Marinetti, 1911.