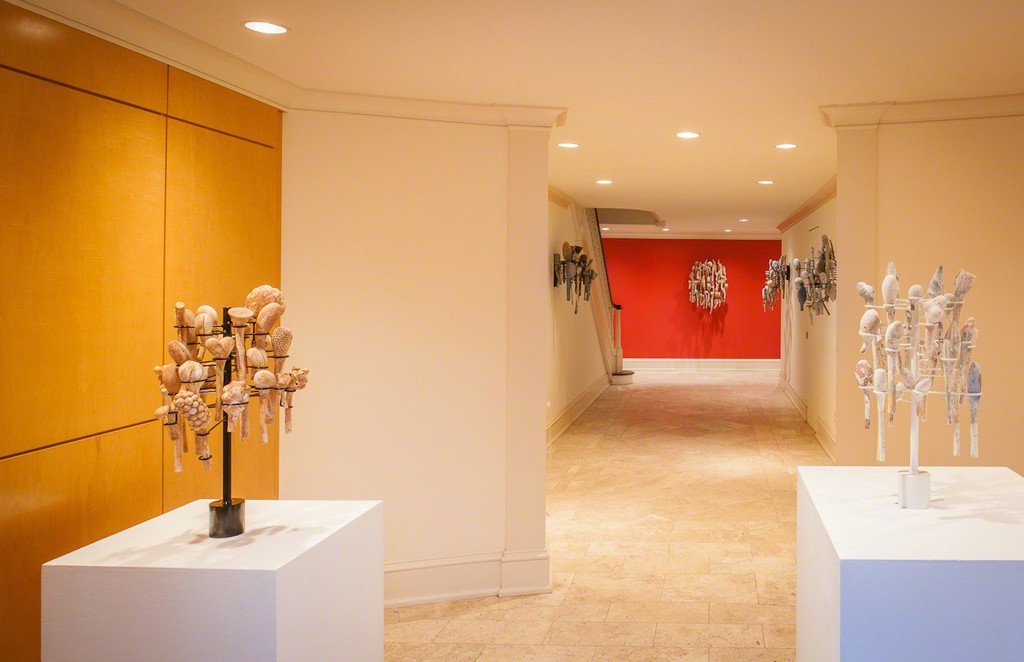 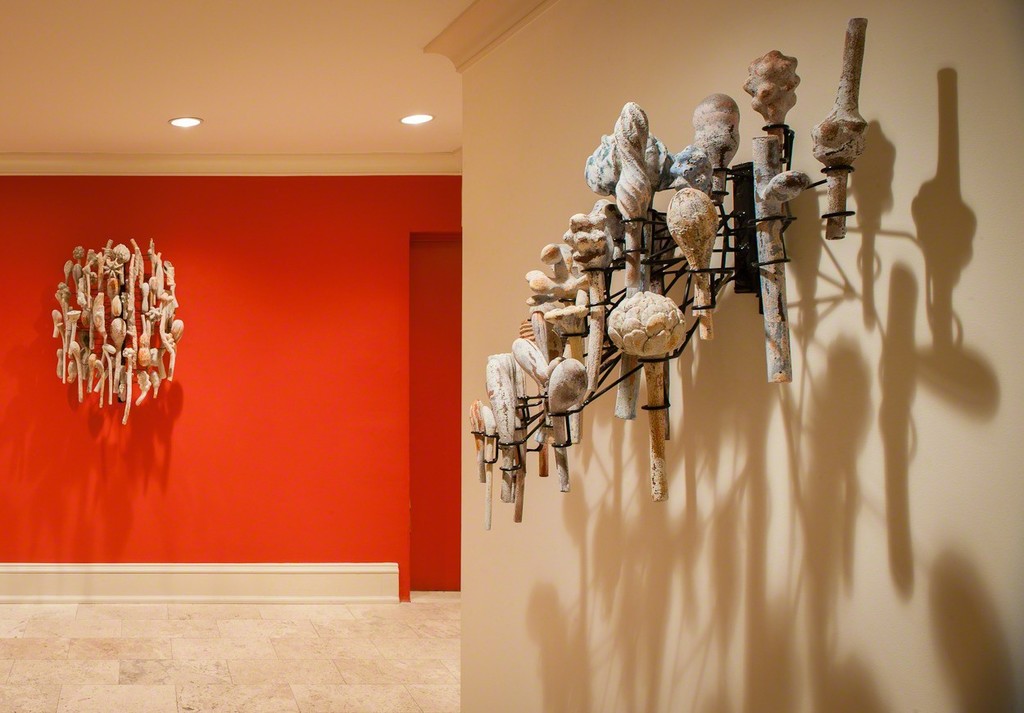 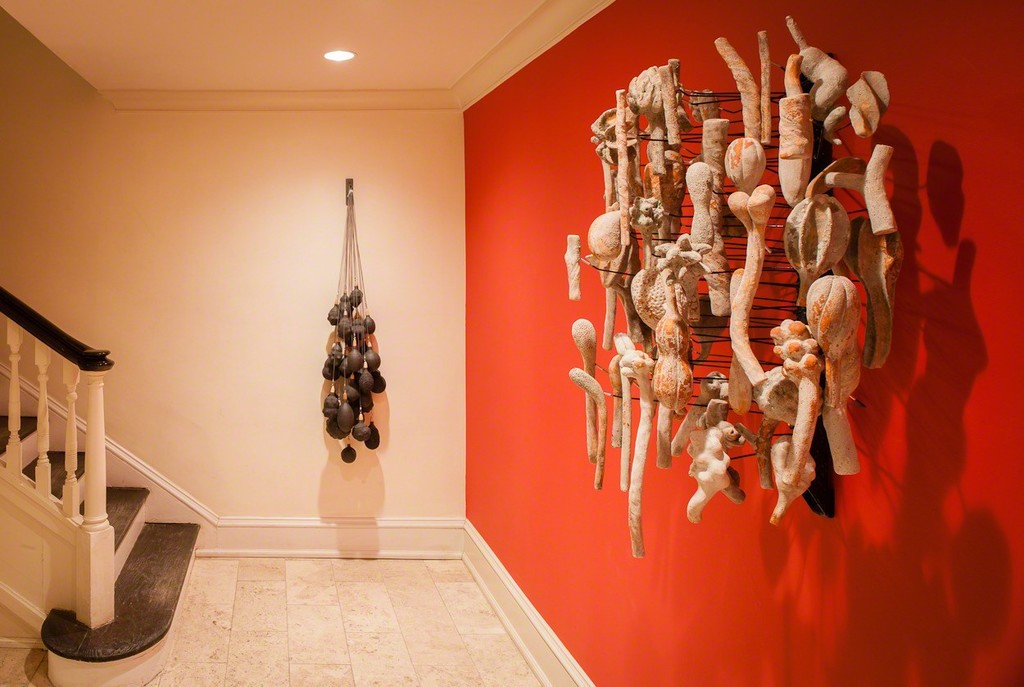 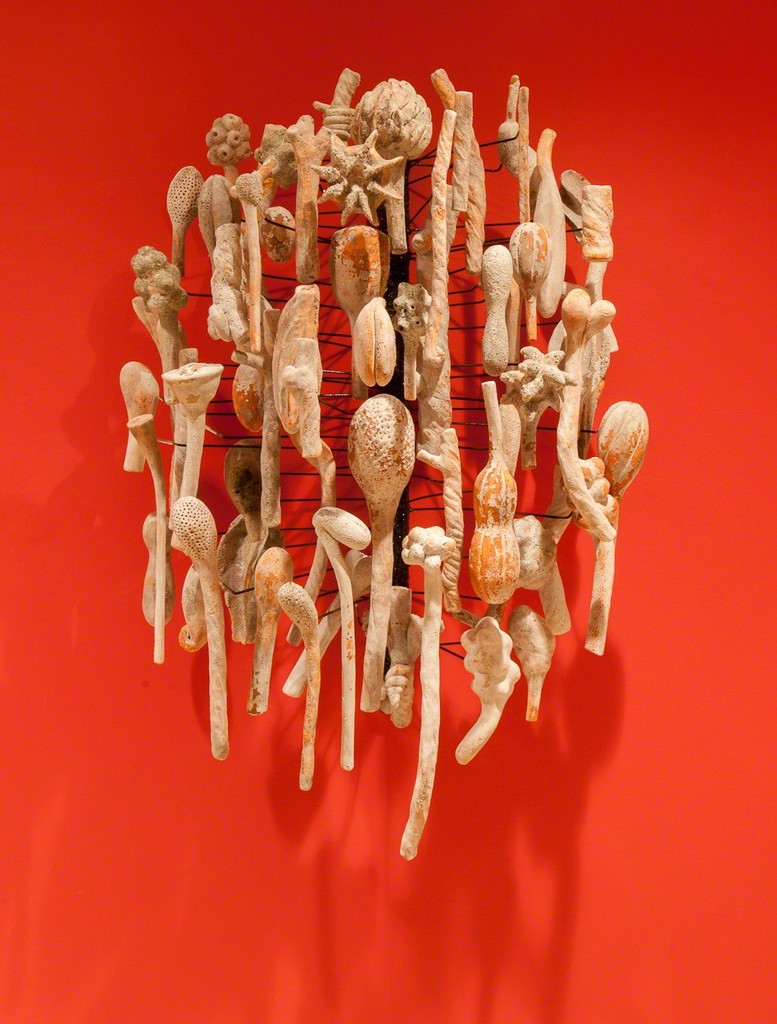 Cross MacKenzie Gallery is pleased to present “Nucleus” an exhibition of new ceramic sculpture by the prolific and compelling California based artist, David Hicks. This is his third solo show at our gallery.

“I am still digging in the dirt to understand my attraction to the agricultural,” the artist says of this new body of work. Though Hicks continues in these botanic and organic themes, his compositions have opened up and become less dense ­– no longer hanging down with the force of gravity from vertical wires. The new work is metaphorically blossoming. His array of gourd-like shapes of various textures, hues and dimensions are now suspended from a metal armature fixed to the wall, projecting outward like sconces, flower-like, hovering in space.

In her 2013 review of Hicks’ 2011 exhibition, “Farewell” at our gallery for Ceramic Art and Perception, Janet Koplos described Hicks’ sculpture; “the works are wonderfully sensuous abstractions (as all pottery can be) and are especially appealing for both color and texture”.

Every element is unique and unfamiliar, inhabiting a place in one’s imagination between associations: at once a cantaloupe or pear, then a beached bouy, an insect pod, a bird’s nest or an exotic dirt encrusted seed. Koplos describes the density of Hicks’ previous work; “But the numbers, the depth of accumulation and the softly worn surfaces hint that they have been retired and frugally held in reserve. It is a library of objects”. Though the artist still draws from that library, the new presentation is more precious, now demanding examination and appreciation for the individual elements rather than focusing the viewer’s attention on the clustered mass. The ceramic forms are one-by-one lovingly harnessed into fitted brackets, more akin to diamond settings now than the sinkers on fishing lines of the past. Even with the artist’s fresh approach and careful selection, his paring down on the amount of objects in the sculptures, Hicks is far from being a minimalist. His wall pieces continue the artist’s themes of nature’s abundance and excess, the forces of bearing fruit and multiplying.

The sense of planting seeds is even more obvious in the two pedestal pieces in the show that sit tree-like with a central weighted stalk, branching out with the ceramic forms perched on and suspended from the metal limbs. We are tempted with the tactile rawness, to pick the heavy fruit before it drops.

David Hicks received his B.F.A. from California State University, Long Beach, CA. and his M.F.A. from the New York State College of Ceramics at Alfred University. His work is in several prominent collections including the World Ceramic Museum, Icheon, Korea, the American Museum of Ceramic Art–AMOCO, Pomona CA, the American Embassy in Figi through the State Department’s, Art in Embassies program and the Arizona State University Art Museum in Tempe, AZ. He lives and works in Visalia CA. with his wife and new baby daughter.