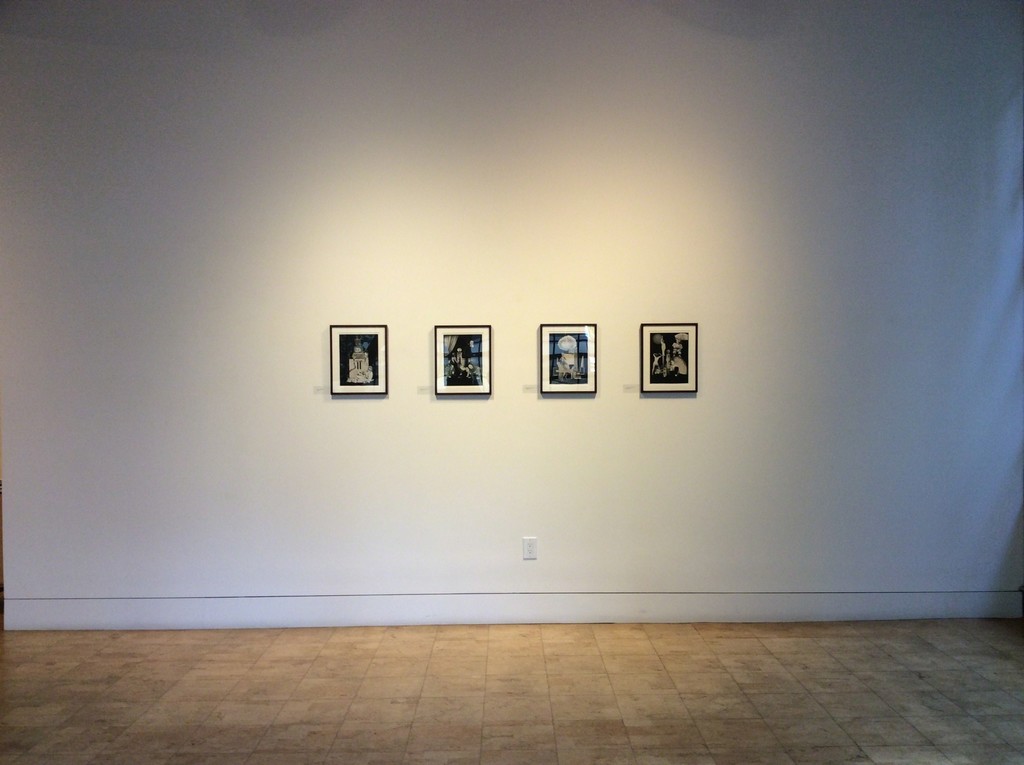 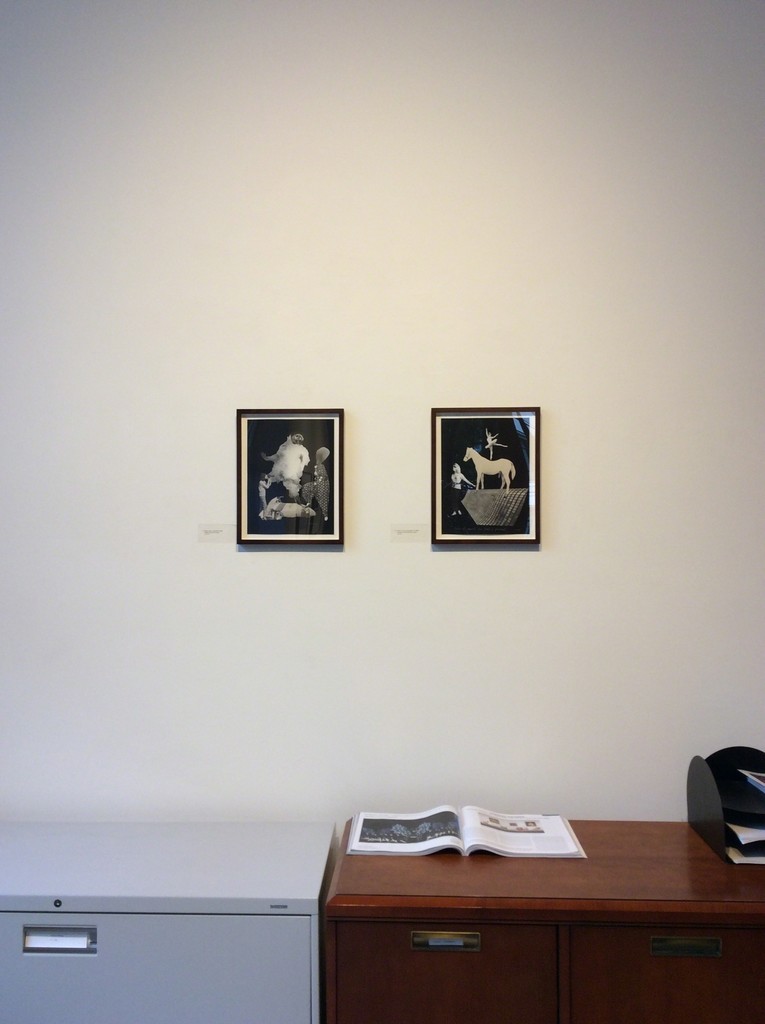 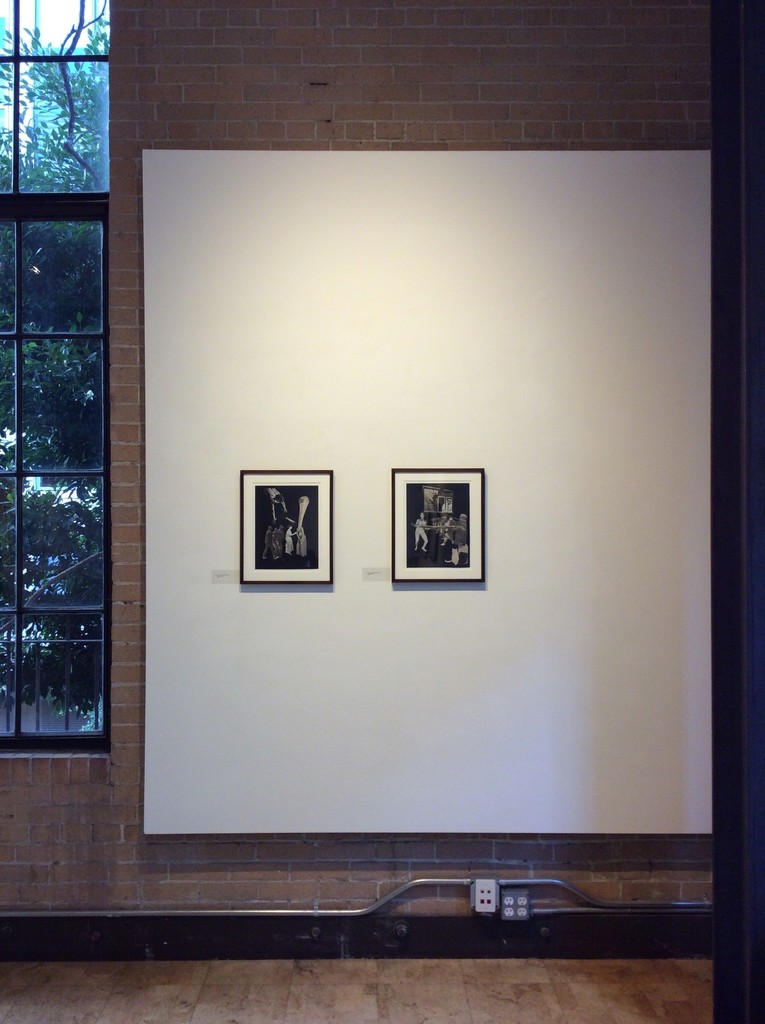 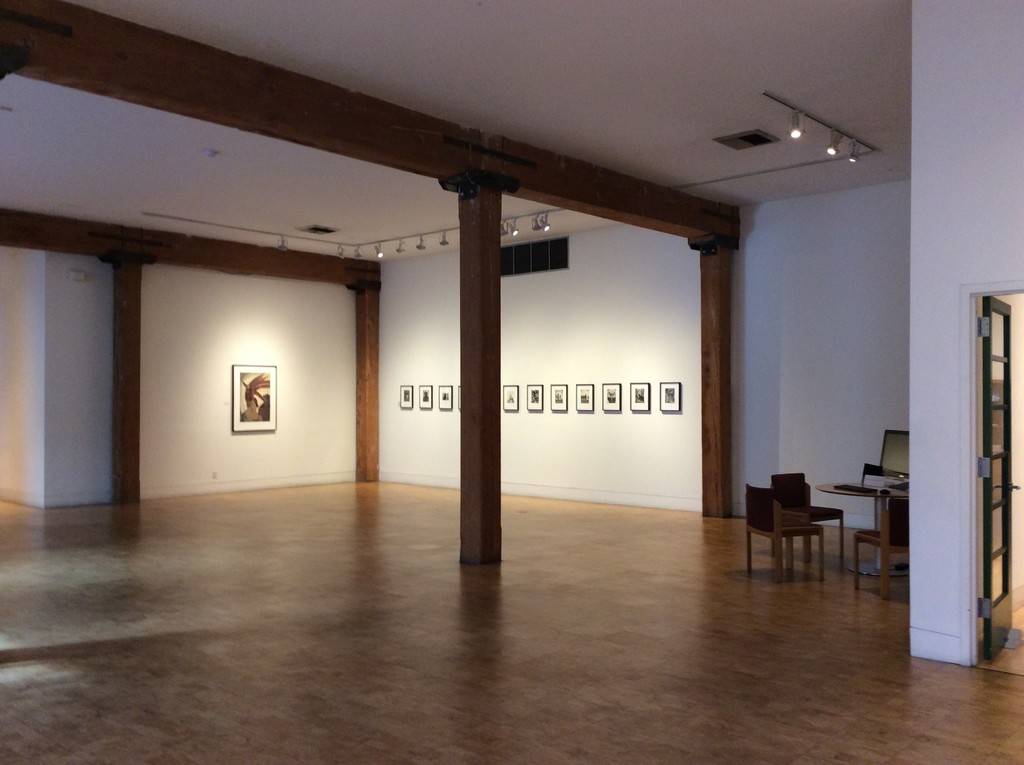 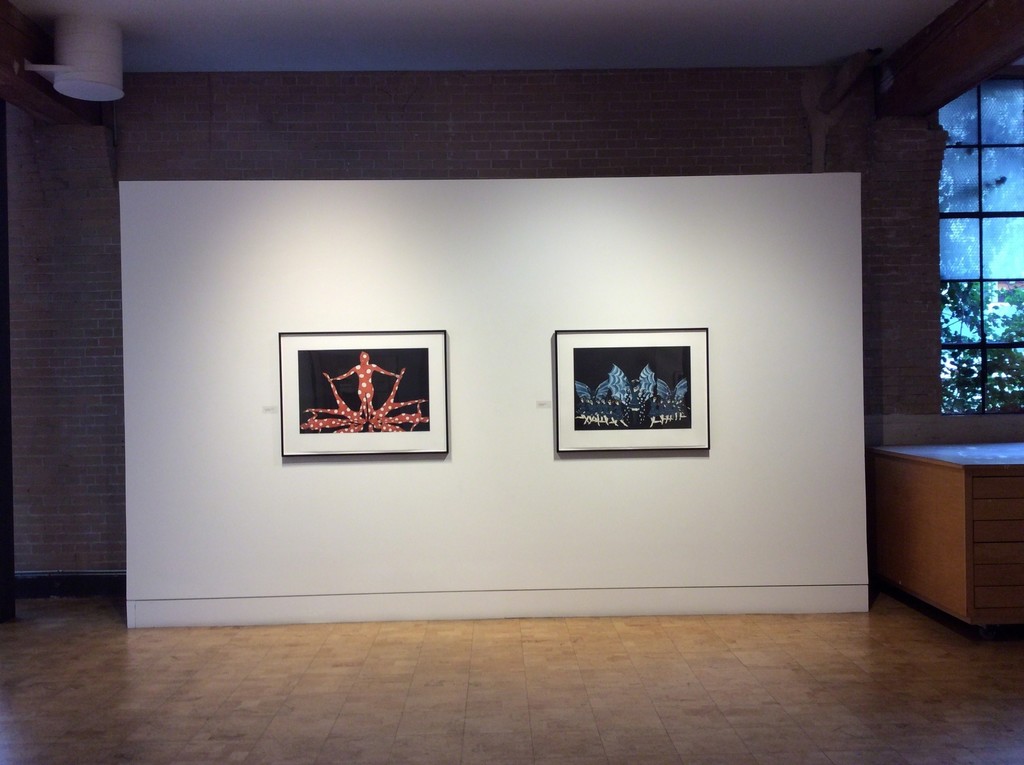 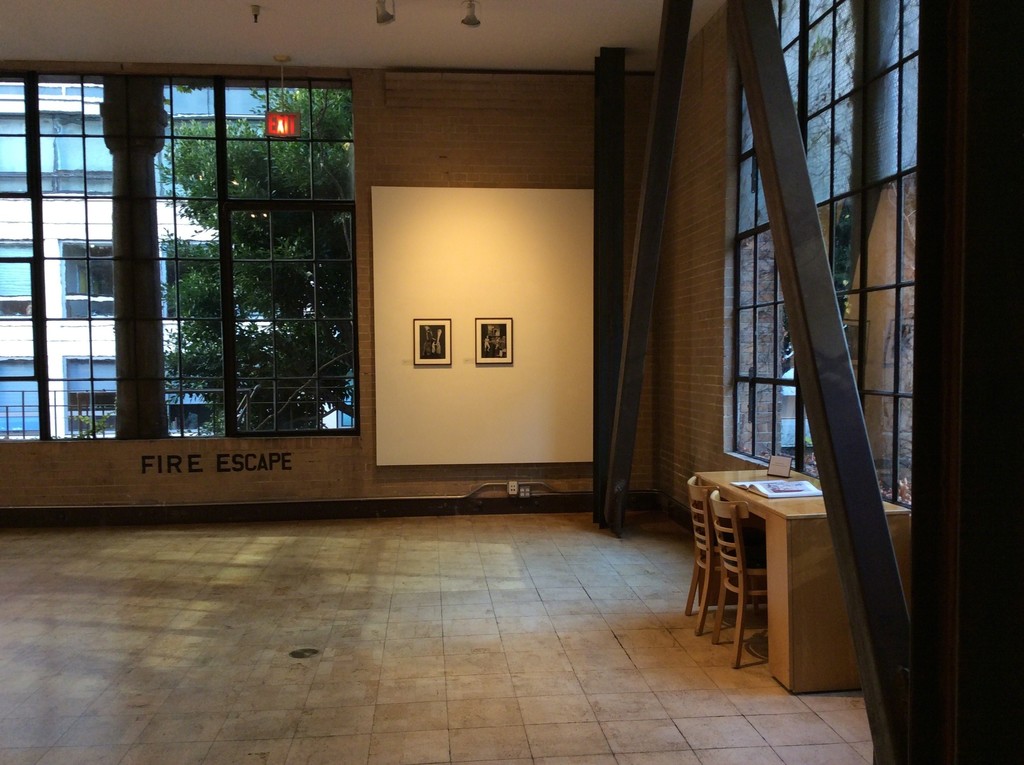 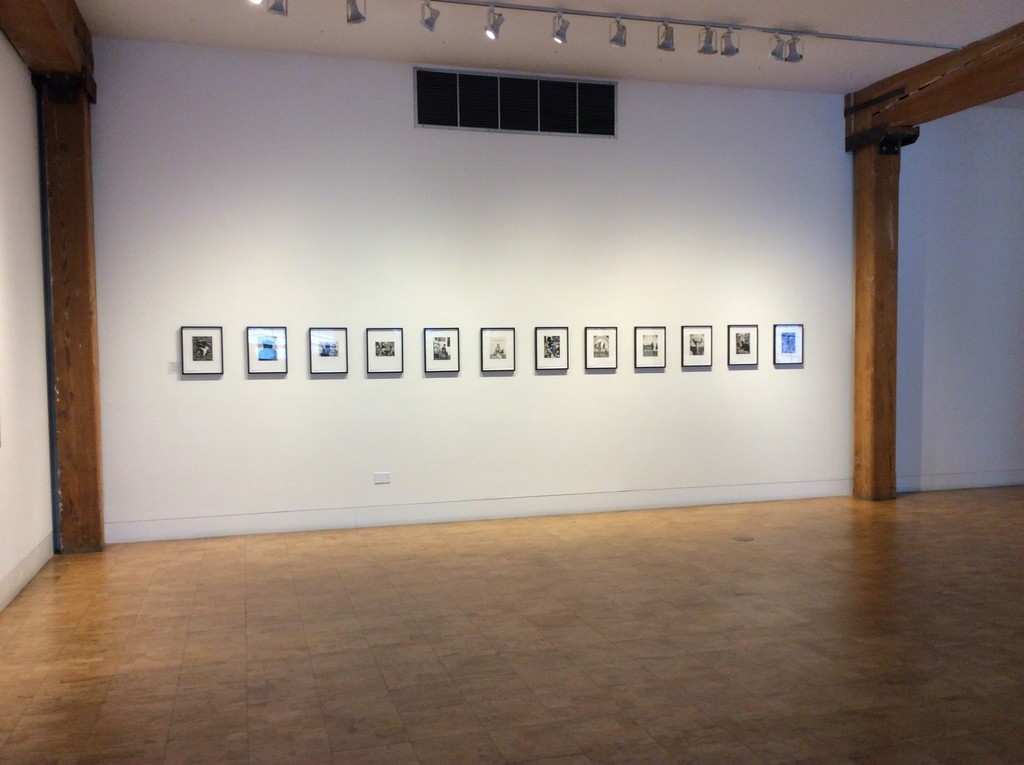 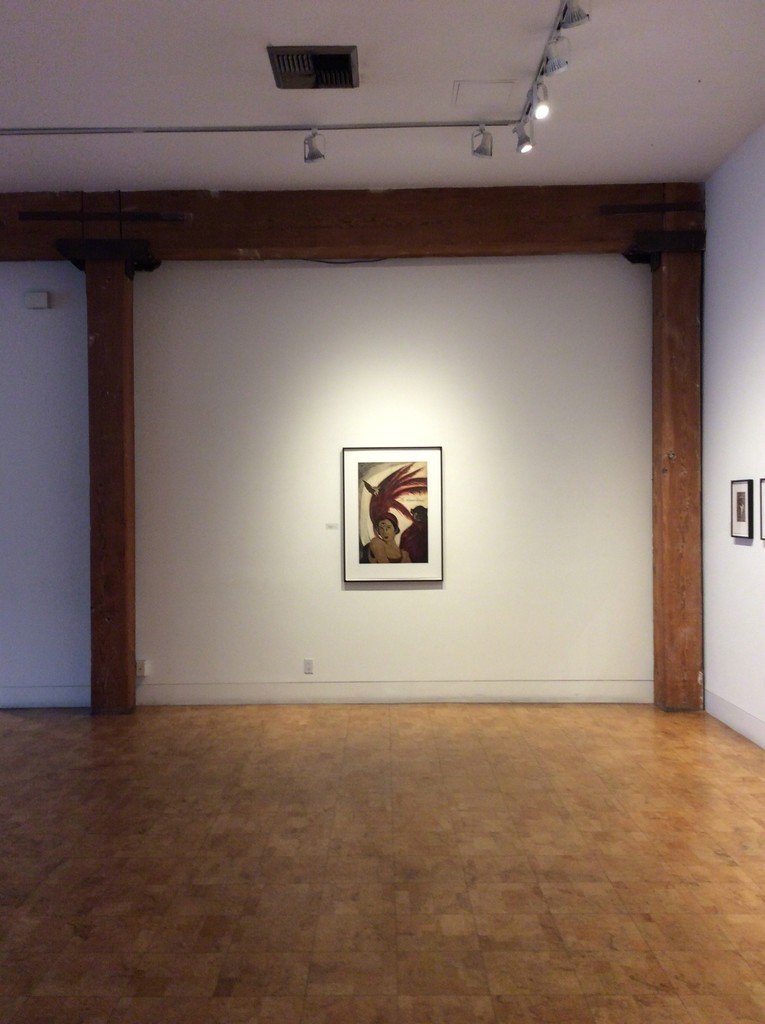 Marcel Dzama is best known for his drawings, but has recently worked in sculpture, film, collage, painting, and costume design. At Crown Point Press he has created three large color aquatints and a portfolio of twelve black and white etchings. The portfolio, titled The Fallen Fables, visually refers to art history, fairy tales, myths, world events, and popular culture. In a 2008 interview with filmmaker Spike Jonze, Dzama noted that his world has its own mythology, “but it’s constantly changing. It breaks its own rules. In one series of drawings, one thing can symbolize something, but in the next series it will represent something entirely different… like a movie director who uses the same actors in each film.” Dzama absorbs information which filters into his work in strange, captivating, and sometimes frightening ways.

Two of Dzama’s three large color prints allude to his recent experience working with the New York City Ballet, designing costumes and sets for a new production. In Our Daughter’s Dance with Wisdom and Here’s a Fine Revolution the polka-dot-clad dancers were inspired by Relâche (1924), a Dadaist ballet by French avant-garde artist Francis Picabia. The third print, The Beauty that is Born from the Seed of the Beast, has more in common with the portfolio works. Borrowing a phrase from Francisco Goya, “Le descañona” meaning “she fleeces him,” it hints at the complicated relationship between beauty and beast.

Marcel Dzama (b. 1974 in Winnipeg, Canada) received his B.F.A. in 1997 from the University of Manitoba, where he was part of a group of artists known as the Royal Art Lodge (1996-2008). He has exhibited widely in solo and group exhibitions throughout the United States and abroad. In 2010, the Musée d'art contemporain de Montréal mounted a major survey of the artist's work. Other recent solo exhibitions include those organized by Kunstmuseum Thun, Switzerland (2014); Centro de Arte Contemporáneo de Málaga, Spain (2012); Museo de Arte de Zapopan (MAZ), Zapopan, Mexico (2012); World Chess Hall of Fame and Museum, St. Louis (2012); and the Gemeentemuseum, The Hague (2011). Works by the artist are held in museum collections worldwide, including the National Gallery of Art, Washington, D.C.; Museum of Contemporary Art, Los Angeles; The Museum of Modern Art, New York; National Gallery of Canada, Ottawa; Solomon R. Guggenheim Museum, New York; and the Tate Gallery, London. Dzama lives and works in Brooklyn, New York. He is represented by David Zwirner Gallery.

The exhibition is on view in the gallery until January 2, 2016.