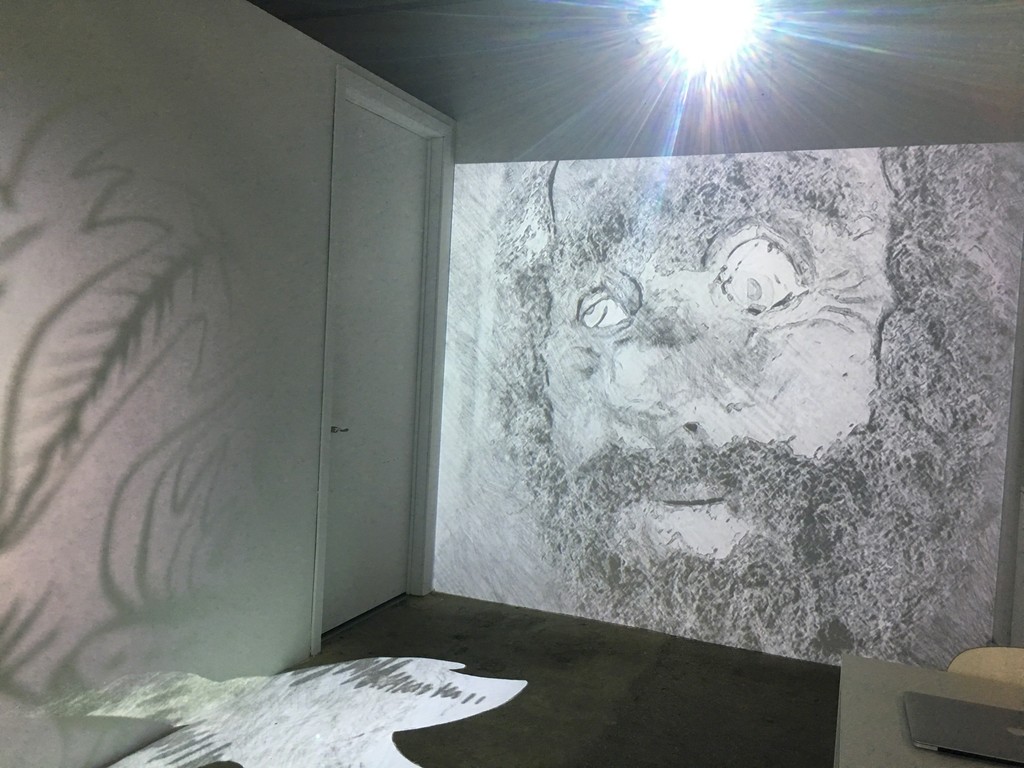 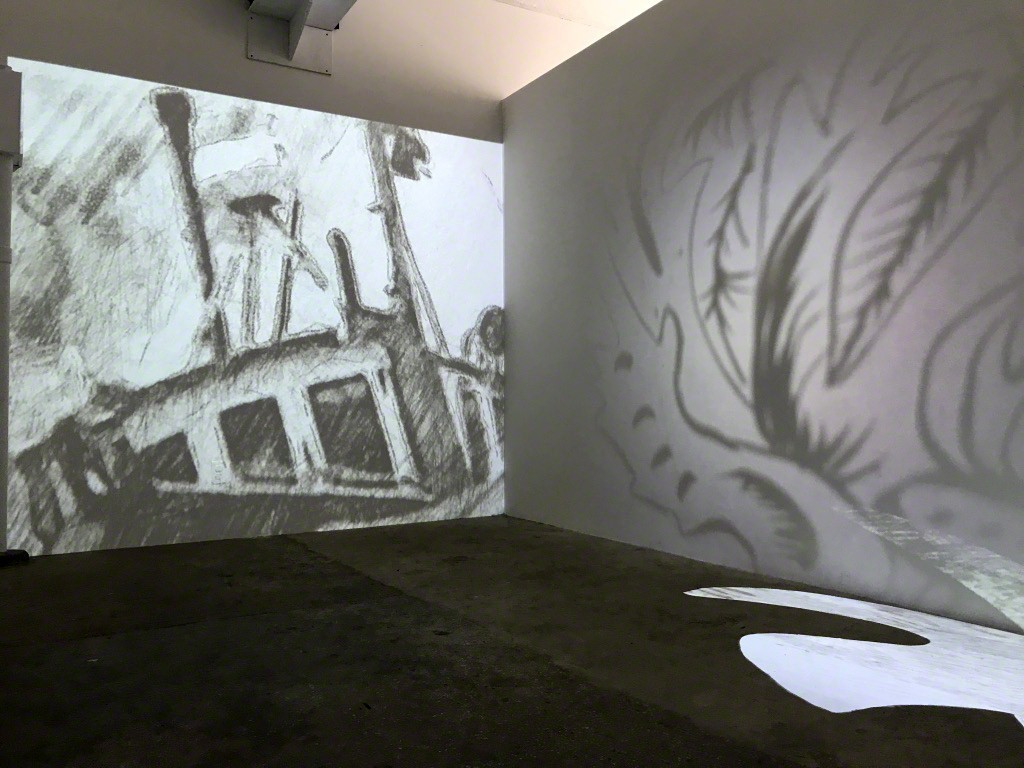 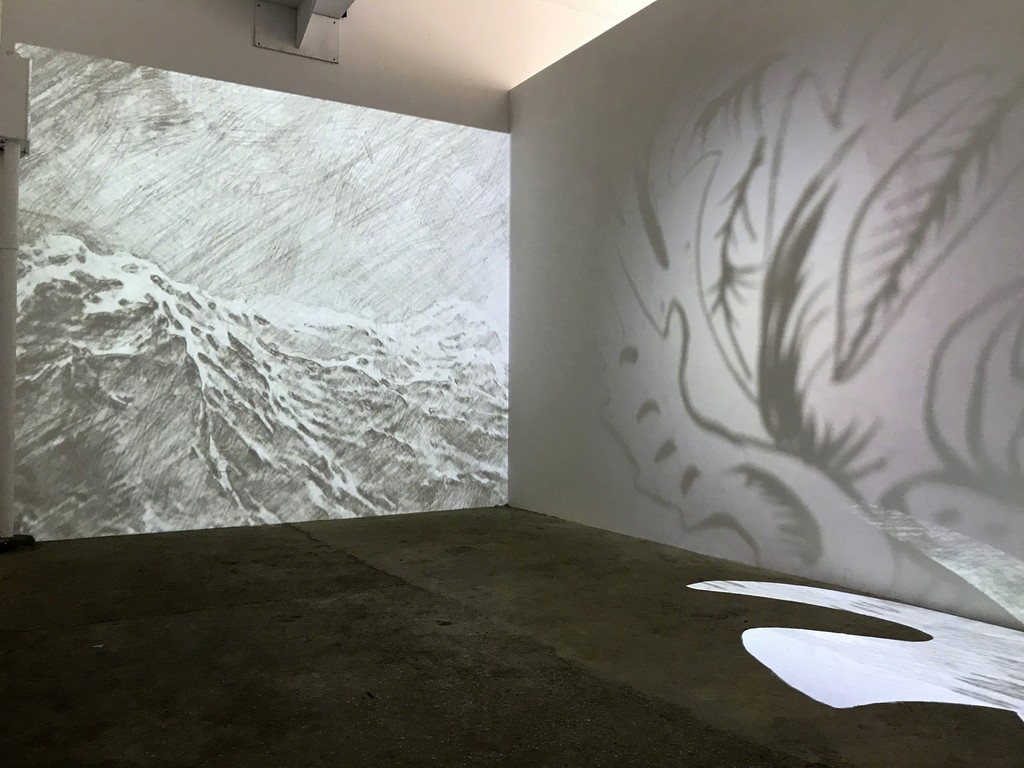 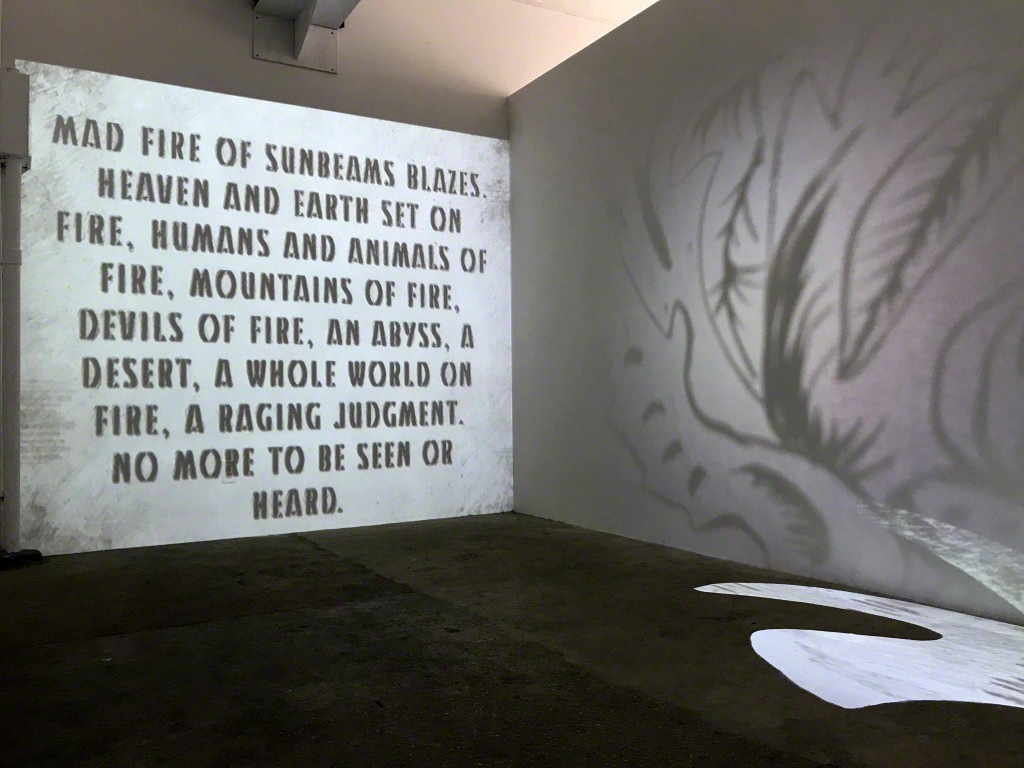 CRUSH CURATORIAL is pleased to present: HUNGER, a collaboration between artists Johannes DeYoung and Natalie Westbrook that uses mixed media animation and installation to create an environment entangled in abstraction, fecundity and mortality. The exhibition takes its name from Knut Hamsun’s seminal modern novel, a story of an unnamed starving artist who wanders the urban landscape in search of fulfillment for insatiable yearnings.

Like Hamsun’s novel, DeYoung and Westbrook’s collaboration is driven by desire. The work explores a longing to reconcile ego, culture, and the natural world, and an unattainable desire for self-actualization. DeYoung’s long standing investigation of the human psyche drives a loose narrative structure in which an animated protagonist seeks meaningful encounters with nature. Meanwhile, Westbrook’s frenetic plant forms spawn endlessly via animated loop, generating fertile environments at once lush and replete, and in stark contrast to the protagonist’s search for psychic nourishment. In a time of heightened cultural anomie, the search for psychic sustenance is ever more relevant. HUNGER examines the coexistence of excess, fertility and deprivation in the natural world as metaphor for the desires and phenomenology of contemporary civic life.

NATALIE WESTBROOK received her BFA from The Cooper Union School of Art, her MA in Critical and Curatorial Studies from the University of Louisville, and her MFA in Painting and Printmaking from the Yale University School of Art. Recent exhibitions include B3 Biennial of the Moving Image in Frankfurt, Germany, Essex Flowers and Robert Miller Gallery, New York, NY; Interstate Projects, Brooklyn, NY; Reynolds Gallery, Richmond, VA; and Co/Lab at Art Platform Los Angeles, CA. She received the Haleakala Artist in Residence, the Robert Schoelkopf Memorial Travel Grant, and the Carol Schlosberg Memorial Prize for Excellence in Painting. Her work is held in private and public collections, including Markel Corporation, Red Bank, NJ; Capital One, Richmond, VA; and Art Bank Program, US Department of State, Washington, DC; and Haleakala National Park, Maui, HI. Westbrook currently teaches courses in Painting and Drawing at Yale University School of Art where she was appointed Lecturer in 2011.
JOHANNES DEYOUNG is an artist working primarily in experimental computer animation, moving-image, and printed media. He received his MFA from the Cranbrook Academy of Art in 2006. His recent exhibitions include B3 Biennial of the Moving Image in Frankfurt, Germany; Essex Flowers, Robert Miller Gallery, Jeff Bailey Gallery, Eyebeam, and Tiger Strikes Asteroid, in New York, NY; the Images Festival at the Art Gallery of Ontario, in Toronto, Canada; Pallas Projects, in Dublin, Ireland; and Hell Gallery, in Melbourne, Australia. Publications include The New York Times, The New York Post, The Huffington Post, and Dossier Journal. DeYoung currently teaches courses in animation and moving-image production at Yale University School of Art, where he is appointed Senior Critic and Director of the Center for Collaborative Arts and Media, and at the Yale School of Drama, where he is appointed Lecturer in Design.