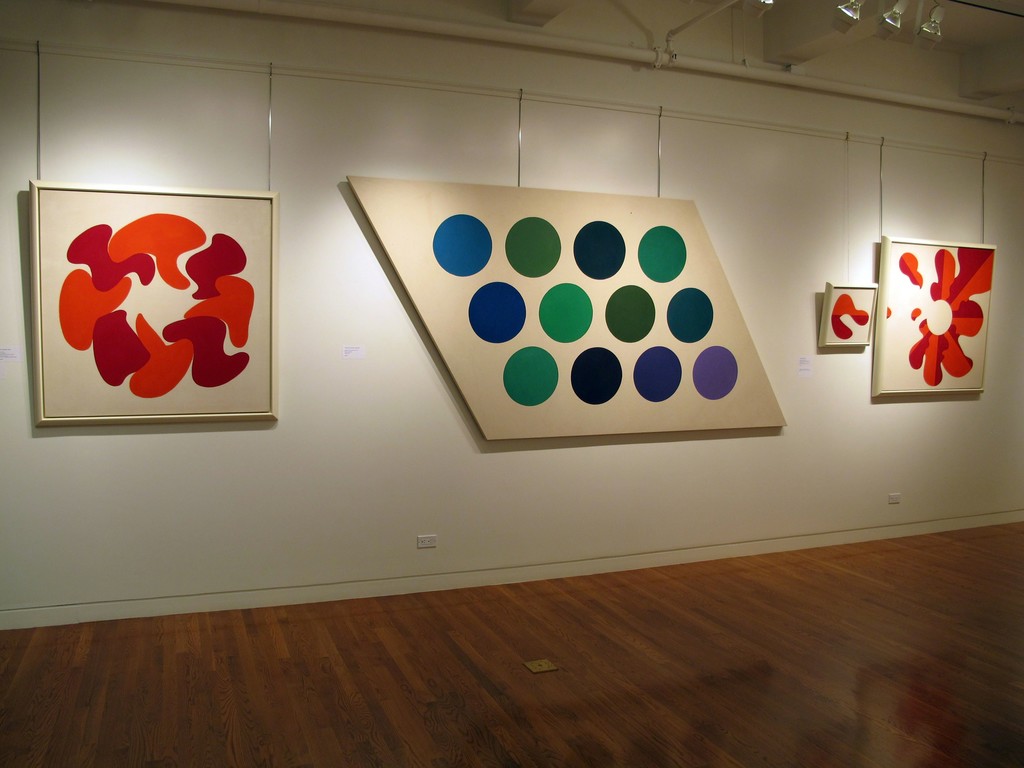 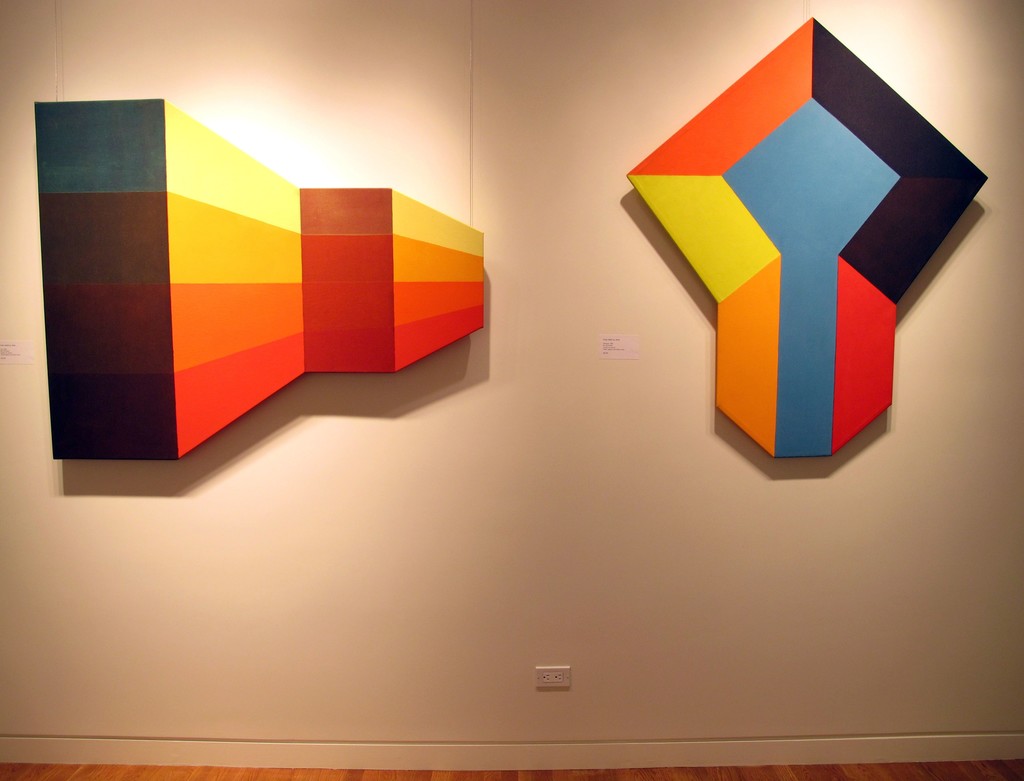 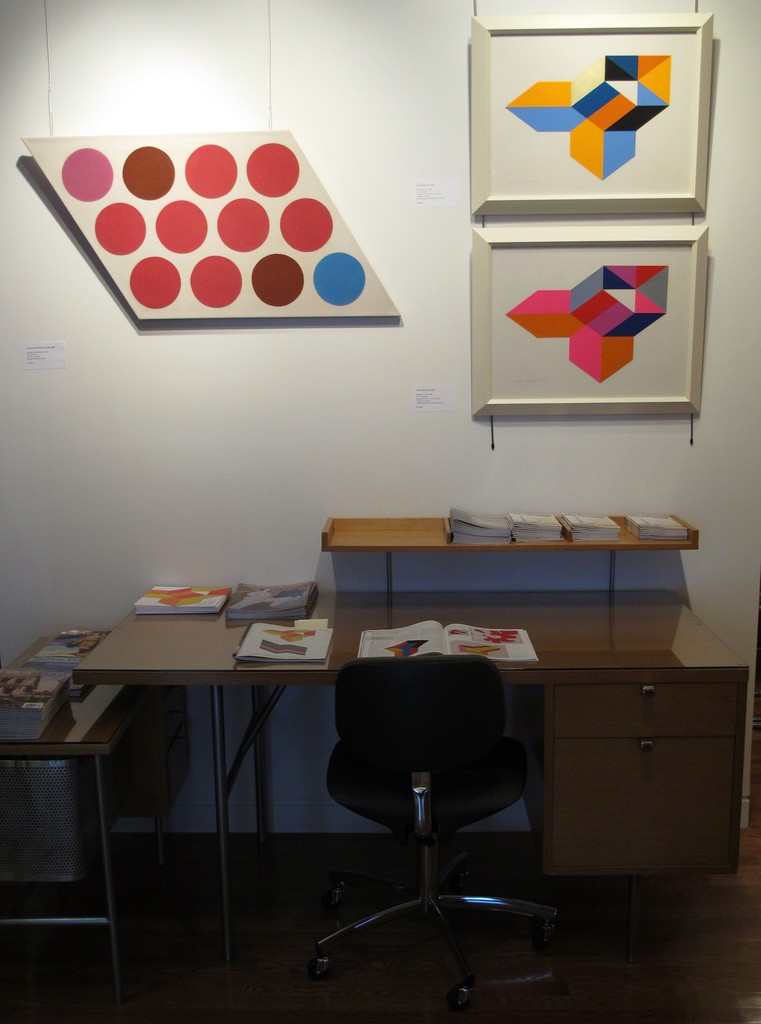 D. Wigmore Fine Art, Inc. announces its new exhibition of Paul Reed’s shaped canvases from the 1960s with 15 paintings
and collages, shown in the context of fellow Washington Color School artists Kenneth Noland, Gene Davis, and
Thomas Downing. The exhibition aims to bring attention to the Washington Color School beyond its well-known use of
poured acrylic on unprimed canvas by demonstrating how it also contributed to the shaped canvas movement.
The dominance of the shaped canvas in the 1960s both in New York and Washington D.C. was a natural outgrowth of
earlier developments in 20th century art, such as increased understanding of how the eye and mind work together to
create vision, as well as the use of photography in composing art and the distortions of scale that came with it. These
developments contributed to the shifting of artists’ interests towards abstract thinking and new ideas of perspective to
challenge the viewer’s expectations by altering the way we experience an artwork. The shaped canvas was one way of
shifting one’s perspective from looking “into” a work in the traditional way to the work entering the viewer’s space. The
focus on achieving multiple dimensions in an artwork set in motion the progression that would lead from the shaped
canvas to later build-outs, video projections, and installation art.

The Washington Gallery of Modern Art’s exhibition The Washington Color Painters in 1965 defined the leading color
painters of D.C. as Paul Reed (b.1919), Morris Louis (1912-1962), Kenneth Noland (1924-2010), Gene Davis (1920-1985),
Thomas Downing (1928-1985), and Howard Mehring (1931-1978). Each artist shared in common the use of acrylic paints,
first Magna diluted with solvents and later water-based acrylics, to explore the properties and working methods of
staining or soaking paint into unprimed canvas. Their subject was color handled in both geometric and all-over compositions,
softened by the effect of flowing paint stained into the canvas. This staining technique became the trademark of
the Washington Color School. Unlike New York’s Color Field art, Washington’s version was geometry-based. The flow
of color and intervals of blank raw canvas softened the geometric-based structures of their compositions and kept them
from becoming hard-edged.

In their development of geometric Color Field painting, some of the Washington Color Painters also participated in the
1960s shaped canvas movement. Gene Davis and Kenneth Noland created some shaped canvases but never fully explored
complex shapes (each is represented by one painting in the exhibition). Thomas Downing and Paul Reed created the
most extreme shapes to investigate how color and shape can change perception. The exhibition focuses on Reed’s
shaped canvases from 1963 to 1968, which have not been the subject of an exhibition in New York since Bertha Schaefer
showed Reed’s work in 1967.

Beginning in late 1965 Reed began to explore the relationship between the inner structure of a painting defined by color
and its connection to the size and shape of the canvas selected. Through consecutive series – Upstart, Interchange, Inside
Out, and Coherence – Reed investigated the transparency of acrylic paints in zig-zags and grids of color. The colors fold
back onto each other and overlap, remaining distinct while also creating secondary colors. The overlays of transparent
color, as delicate and light as a veil, were achieved through the deft use of a painter’s roller. Reed’s works investigating
transparency are shown alongside one of Noland’s Plaid shaped canvases from 1974 to show how the Washington Color
School took advantage of acrylic paint’s ability to be solidly colored even when applied thinly to examine shape, color,
and line through transparency.

Expanding on the relationship between the overall form and the color within, Reed returned to the shaped canvas in

Paul Reed created his most radical shaped canvases in 1968 and 1969. These works focus on the center of the work
rather than the edges. The first two series were titled Safid (a river in Afghanistan) and Marmara (a sea in Turkey). These
shapes referenced looking through the geometric arches of Islamic architecture to sources of water. Later series from
1968-1969 were titled Barcelona, Margem, Step, Pass, and Thule. In these sculptural abstract forms, Reed used color to indicate
planes of a multidimensional form and create sculptural depth with a succession of matte and fluorescent paints.

A catalogue is available.