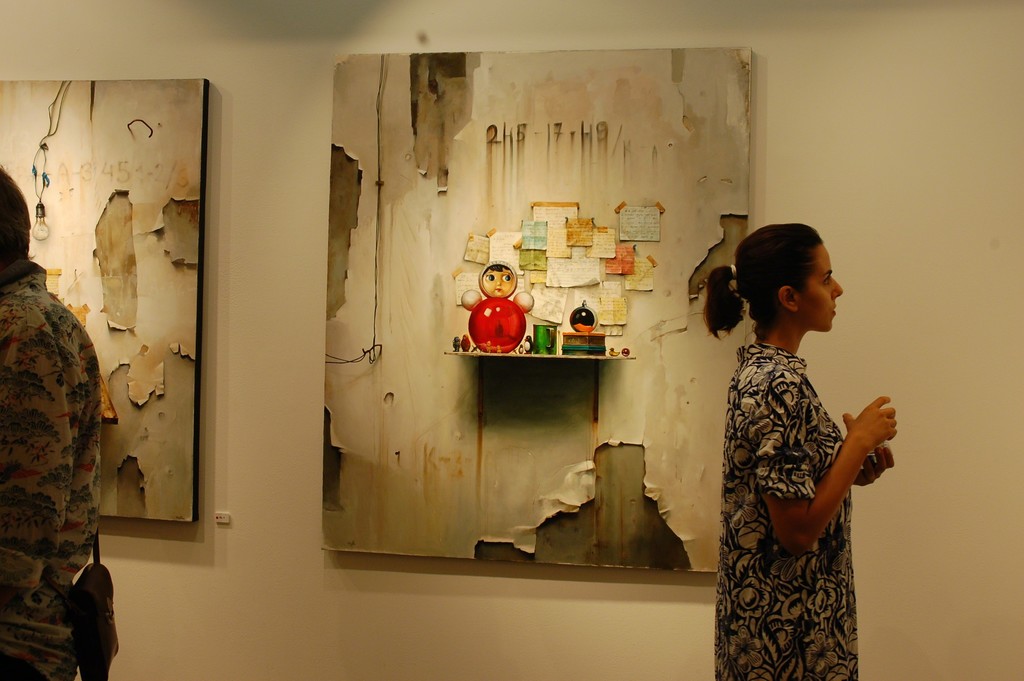 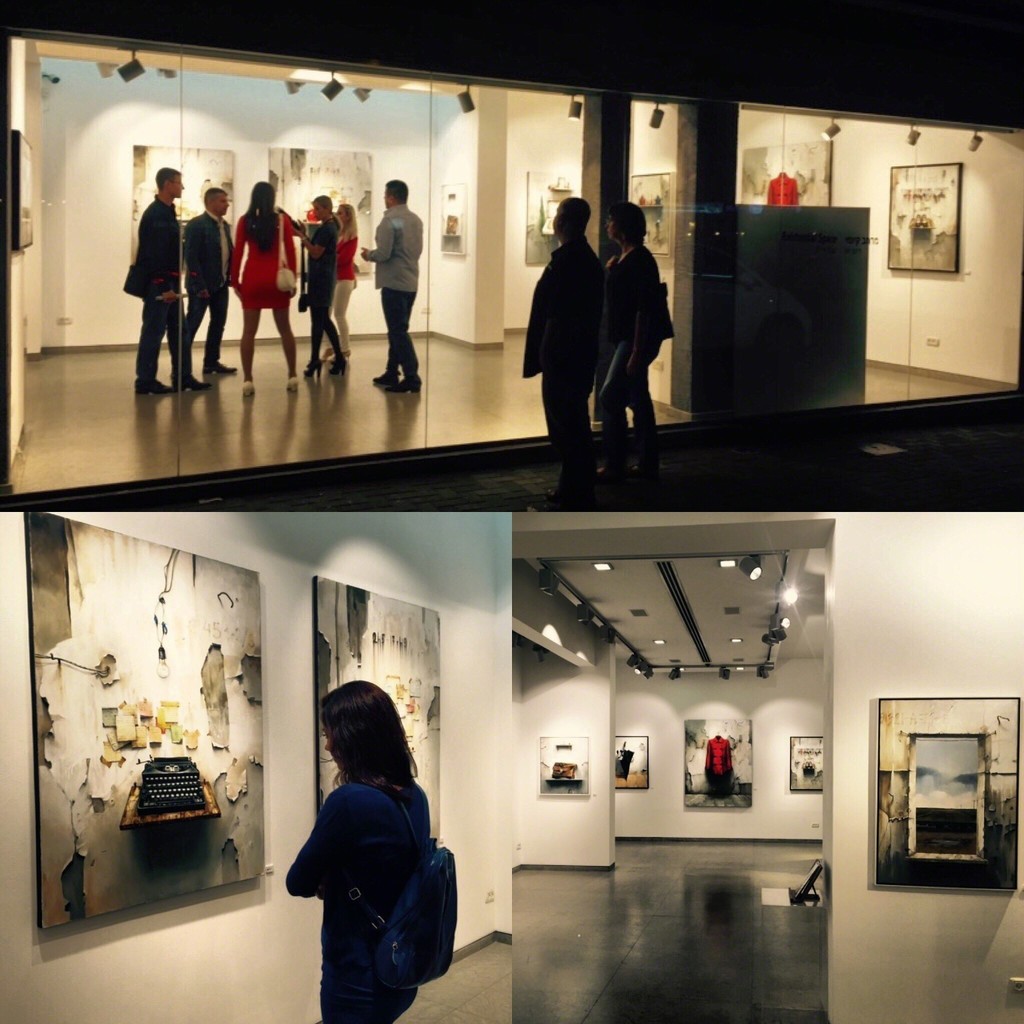 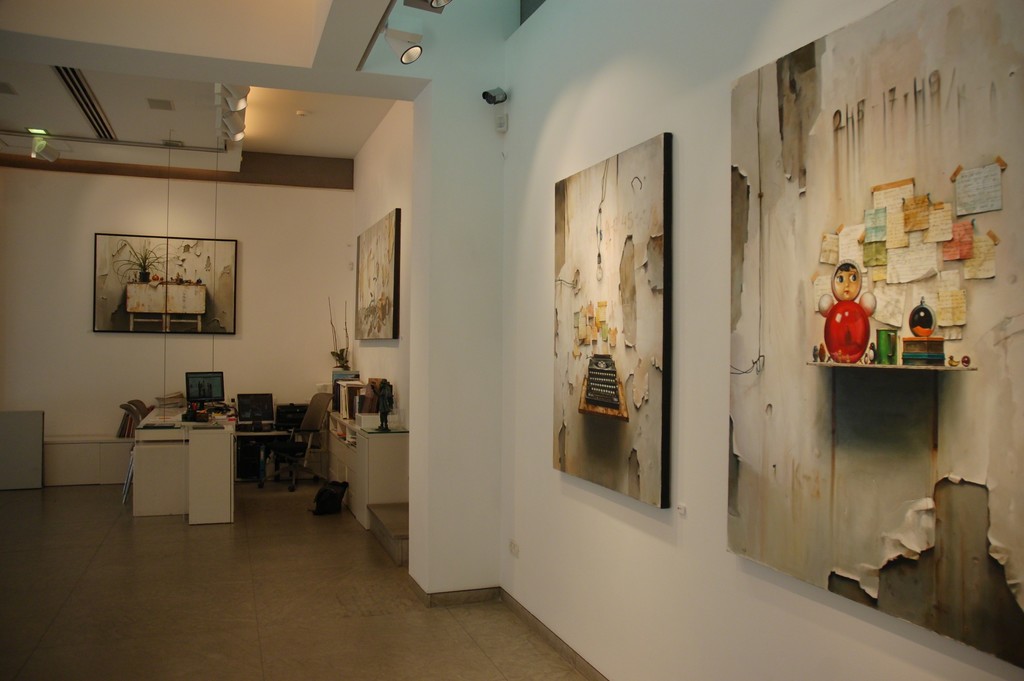 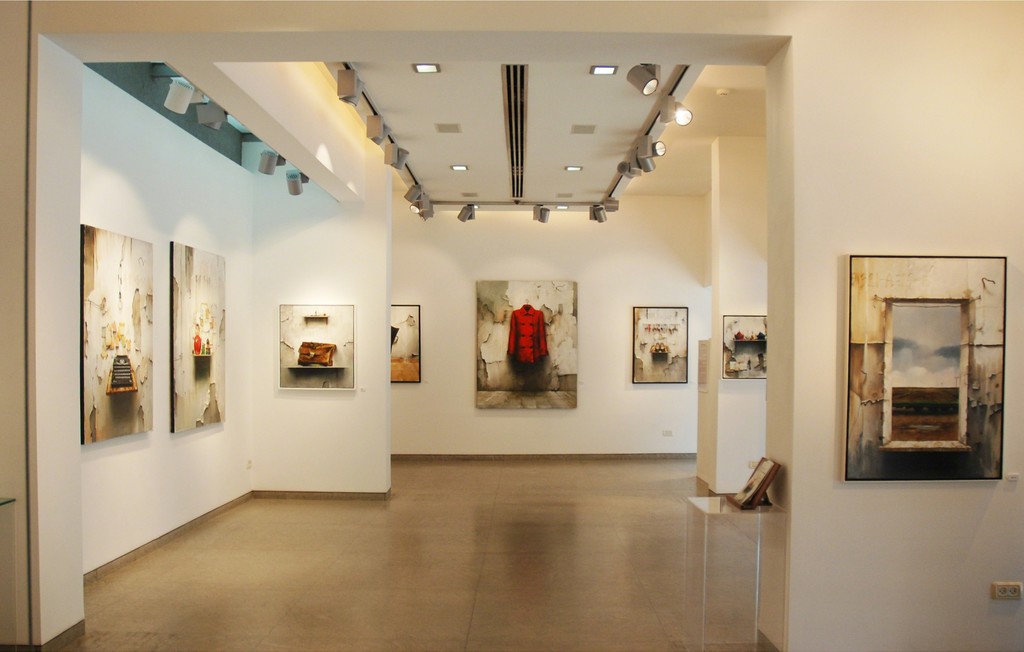 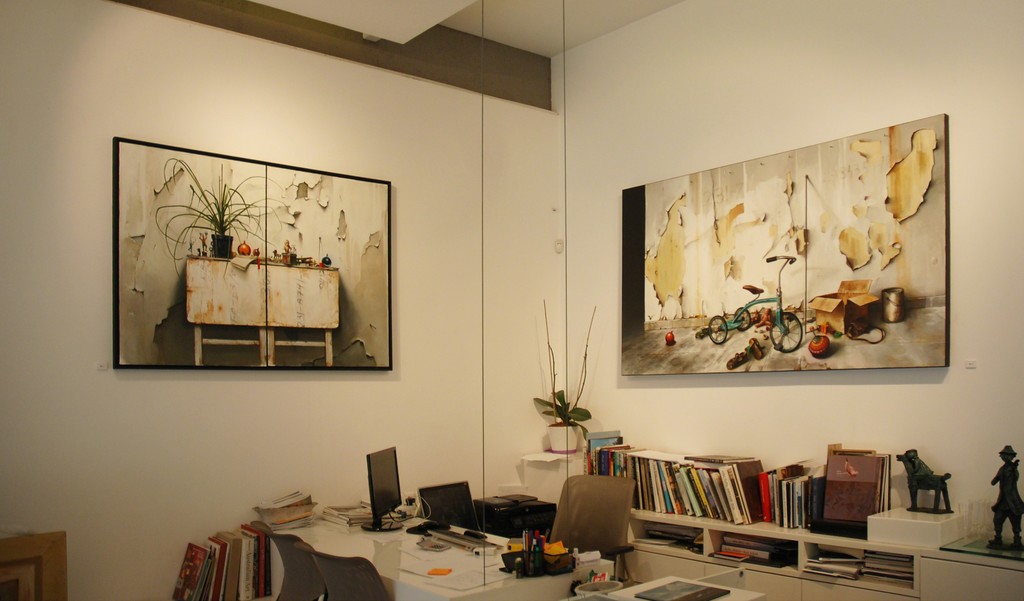 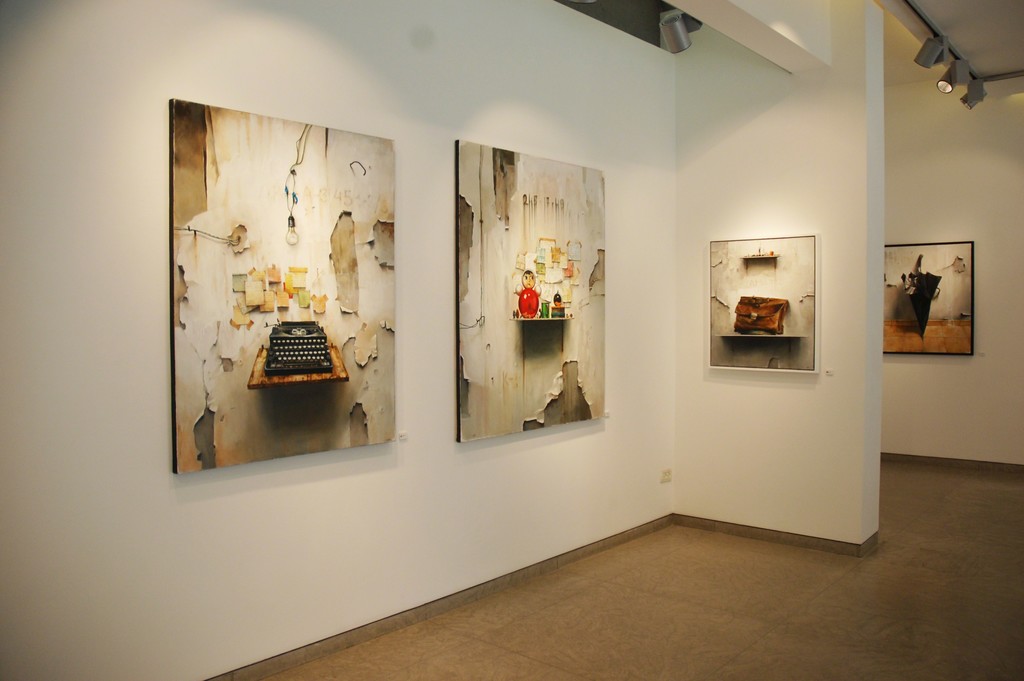 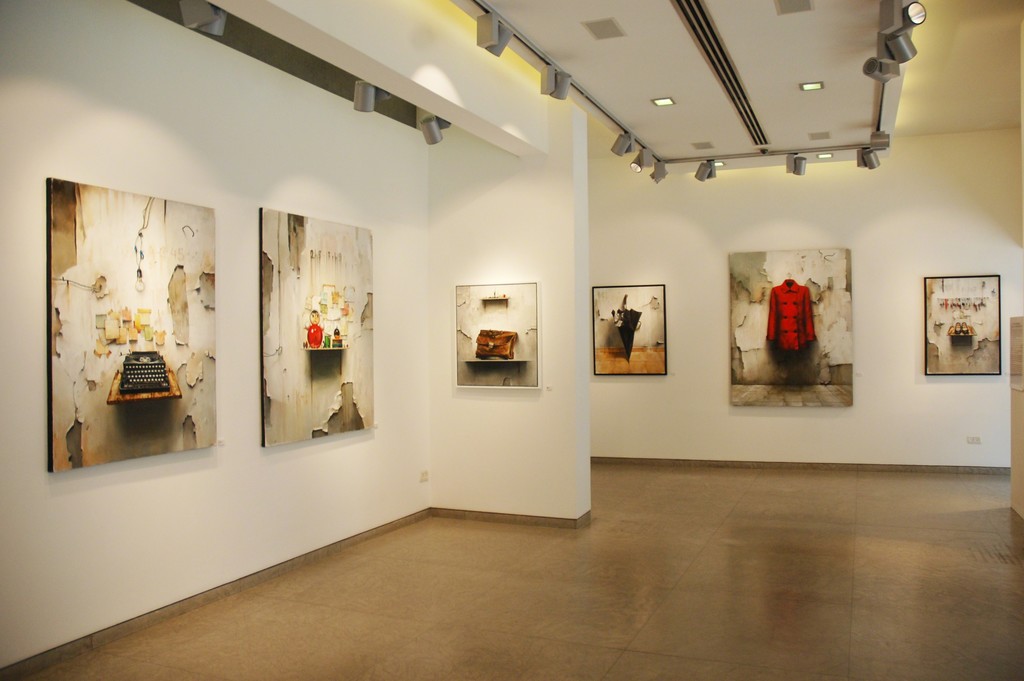 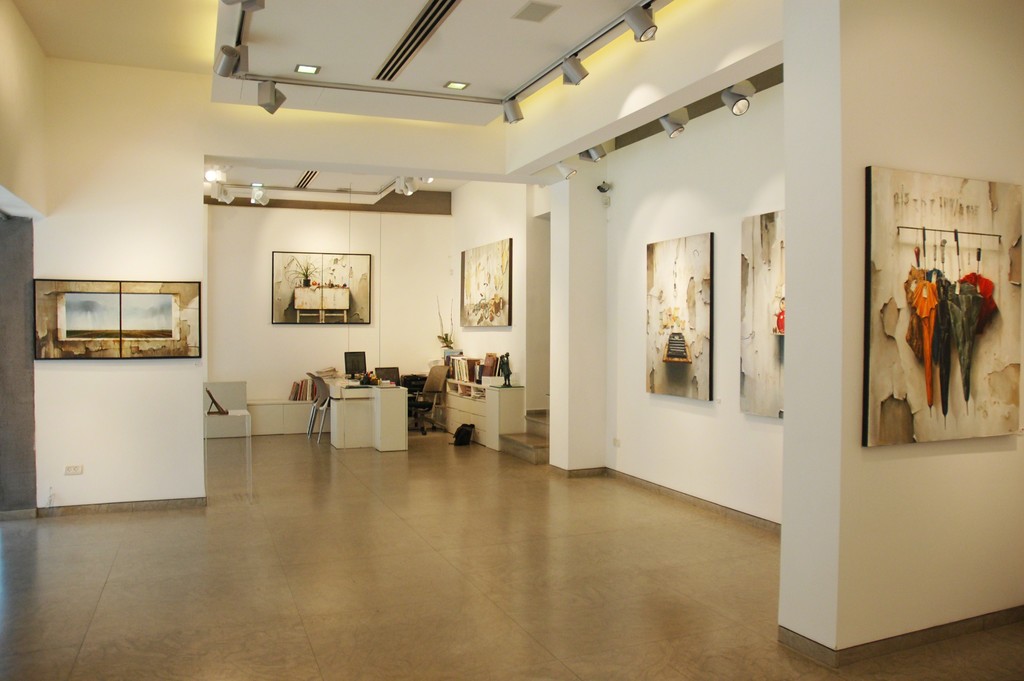 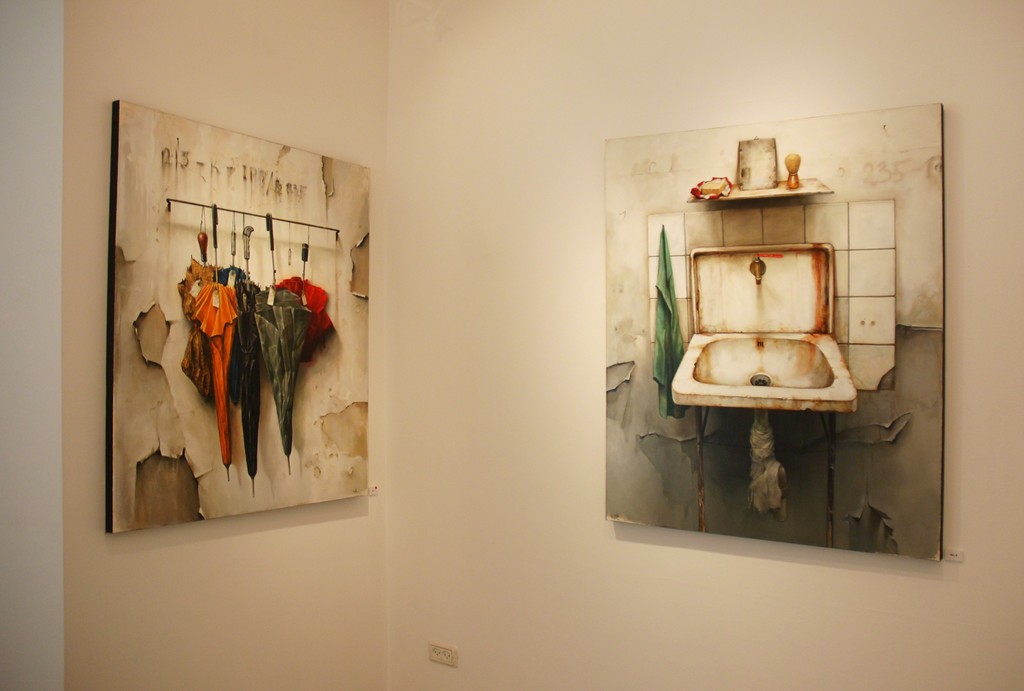 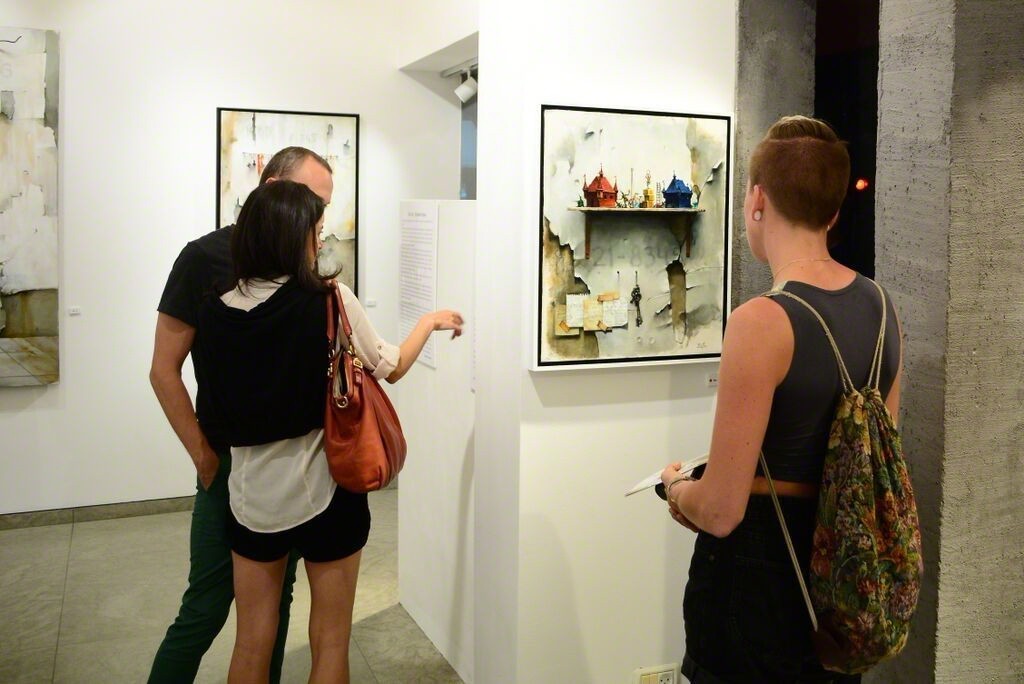 Peeling walls, catalogue numbers and old items have become a trademark of Dim Yuz’s works.
The peeling walls motif, which first emerged in works presented in his exhibition at the Museum of Israeli Art, Ramat Gan, stirs curiosity and raises the question of their whereabouts. Are they taken from the present or are they rather a piece sourced from the existential space of his childhood, as described by Meir Aharonson, director of the Museum, in the exhibition’s catalogue?
“This paint, these walls, live on inside the memory – the sphere of longevity. The oil paint once dabbed on the walls of houses tended to peel away, leaving the wall as a dented, chipped-away-at skin surface. This sight is cemented by Yuz in his paintings, with a seemingly nostalgia-free gaze, which nevertheless retains within a kind of childhood memory that cannot be erased, stirring a sense of longing, as childhood memories do, harsh though they may be.”
Contemplation of Dim Yuz’s works evokes a sense of empathy among those of us who grew up in Israel, Russia and almost anywhere on the globe.

Motifs such as the tricycle and spinning top, which most of us played with and grew up on, highlight the huge gap between the analogic generation of games on the one hand and the digital generation of screens on the other, communicating mixed feelings to the observer, regarding the end of the age of innocence and whoever was lucky enough to experience this extinct quality.

“Existential Space” is a sequel to the artist’s previous exhibition, “Full Scale”, where old items like the umbrella, sink and telephone were displayed as details in the overall picture. In his new works, however, the artist opts to feature the very same items as a key motif, augmenting them and having them take centre stage. The composition gives a sense of 3D, as evident in the typewriter work; at a first, misleading glance, the machine seems to come out of the painting and it is almost like you can tap on its keys.
Some of the new works feature memo pages with inscription in Russian, its letters faded, testimonies to the passage of time, simulating the things that the artist wanted to remember but forgot. Only half-words remain of that childhood period in The Ukraine, half-sentences and lost items. This period, just like the items, is gone forever. It is only the memory recorded on canvas that remains as testimony to its existence.