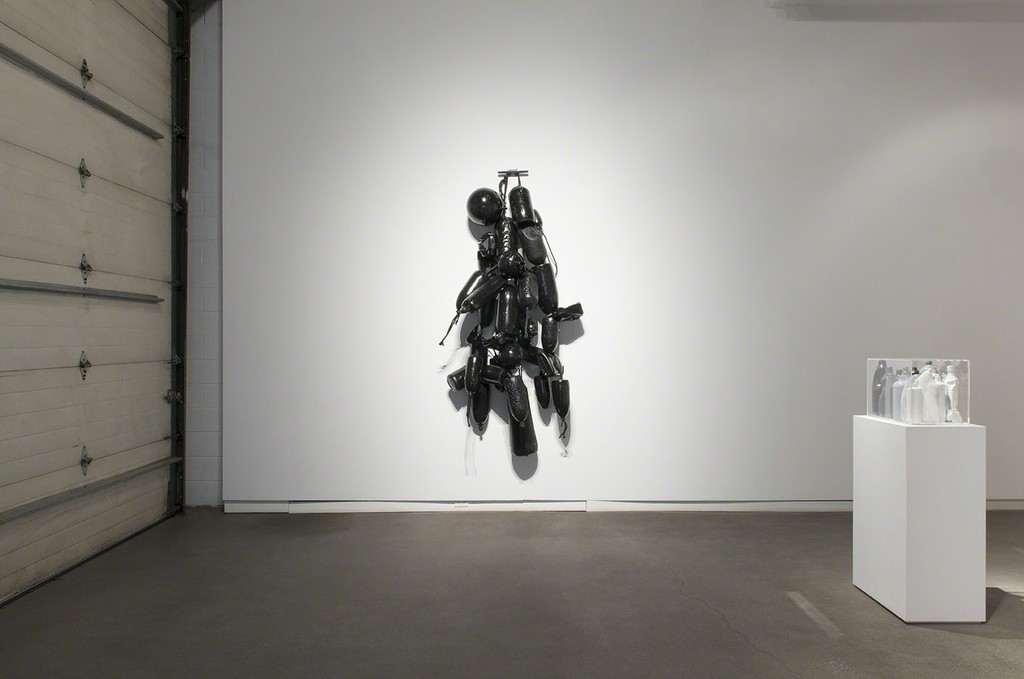 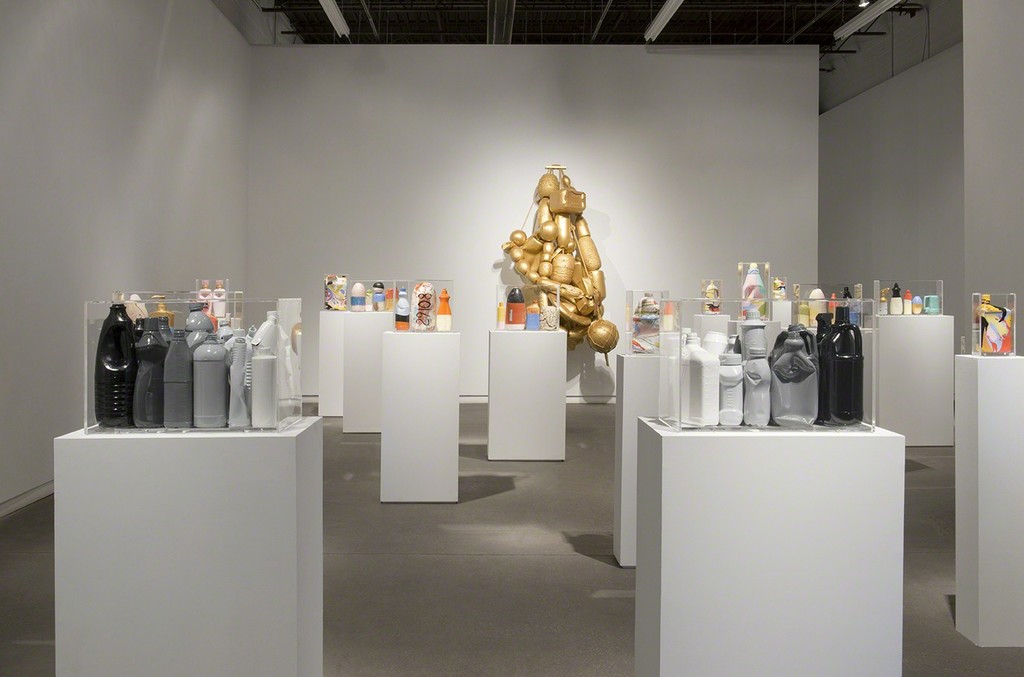 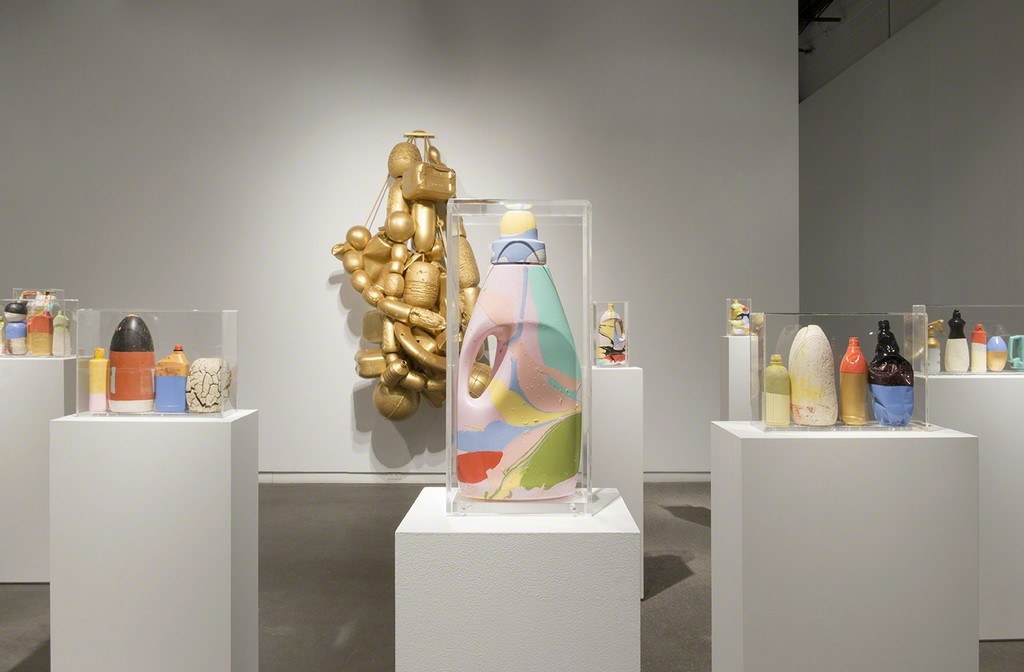 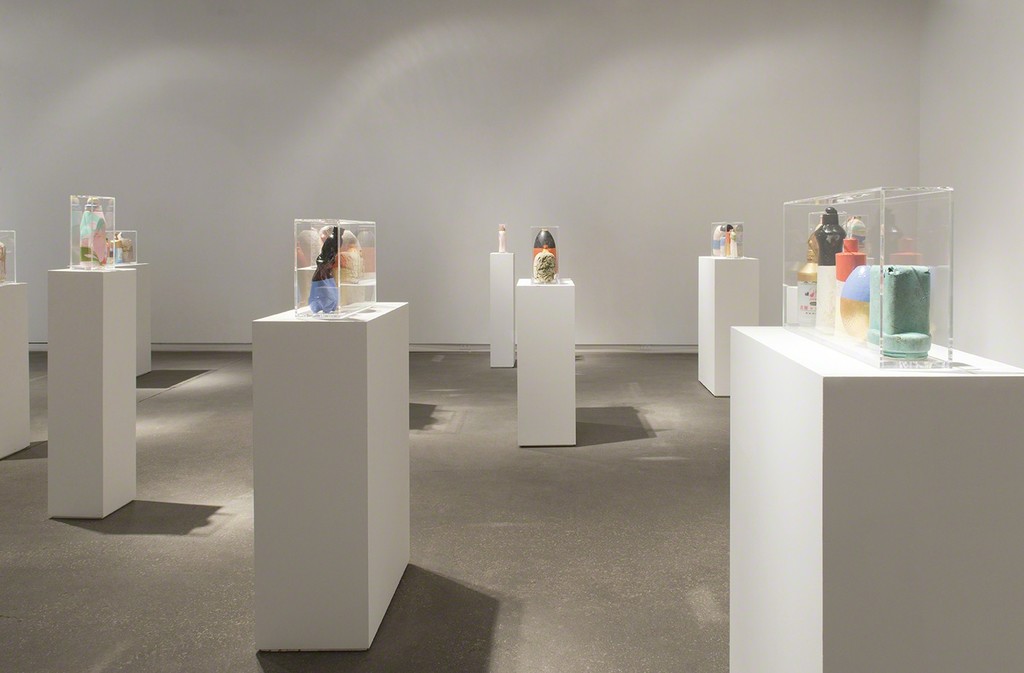 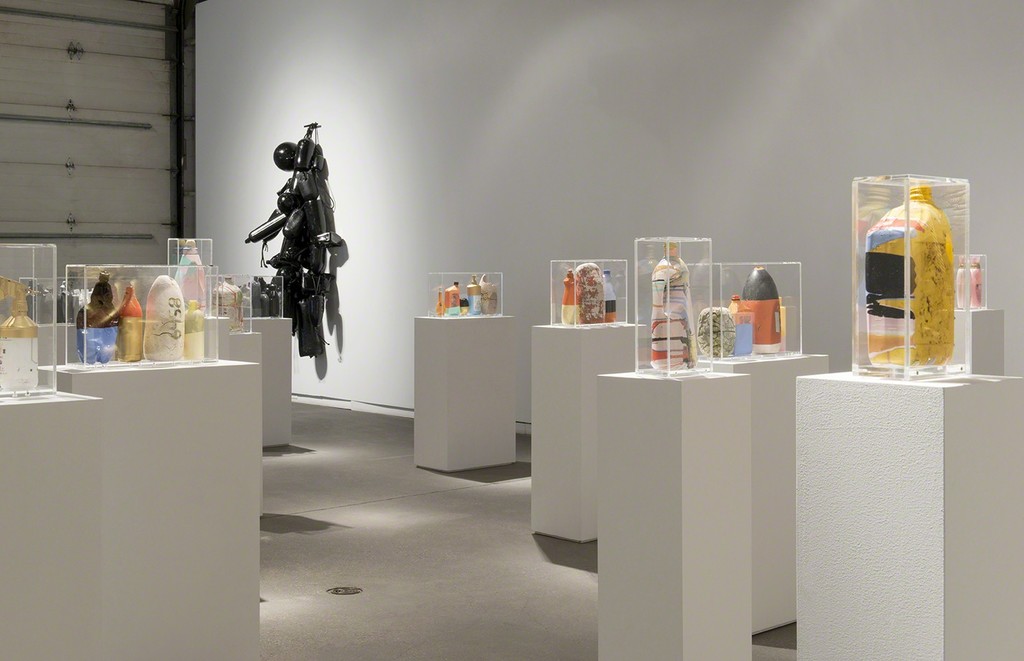 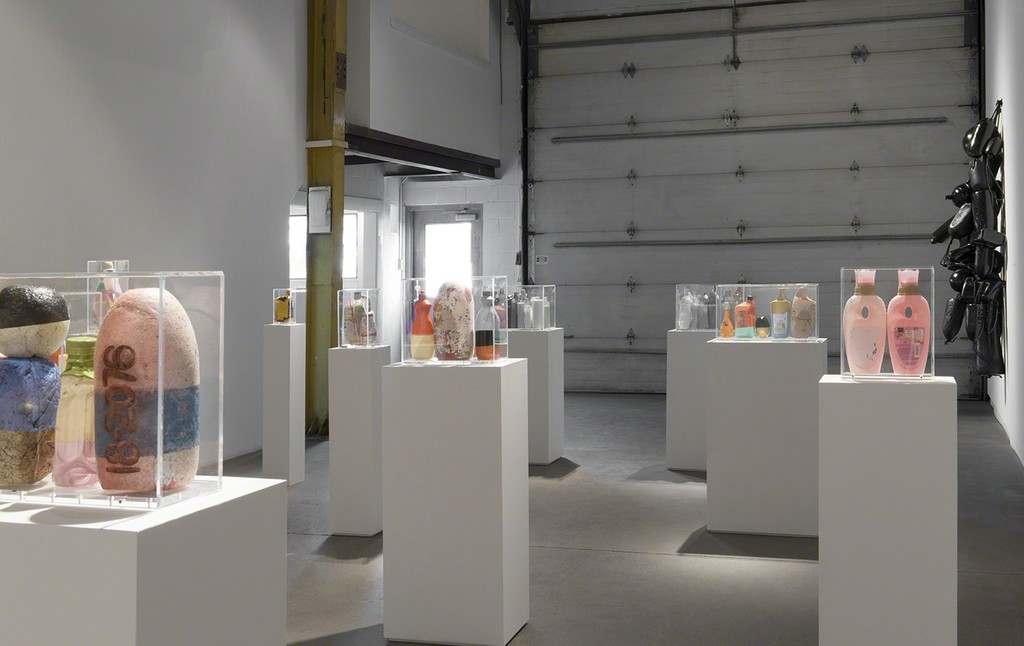 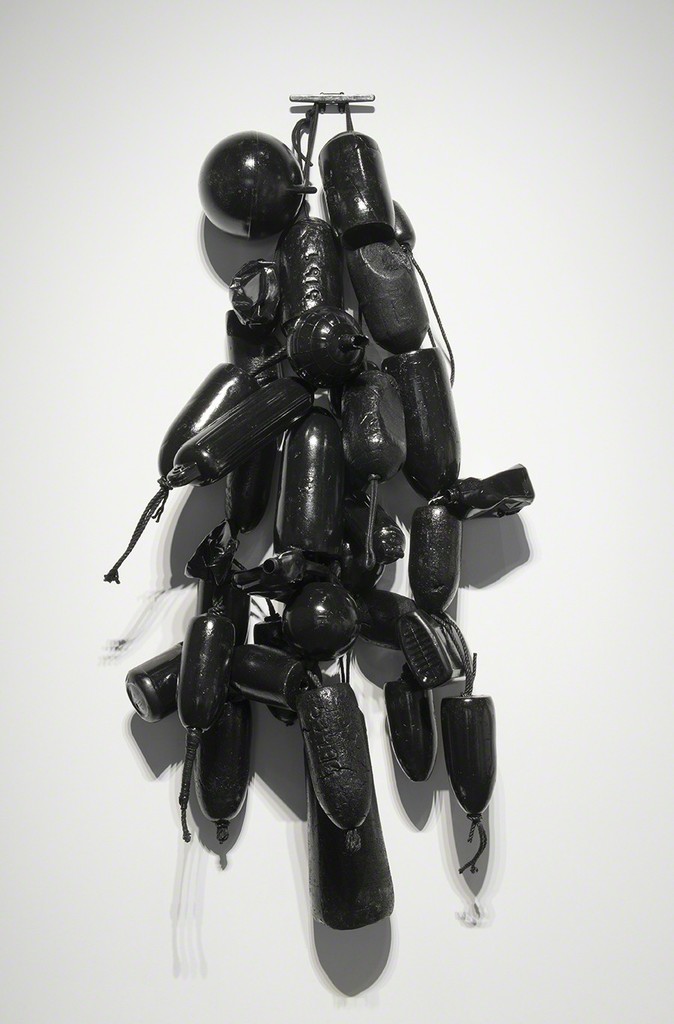 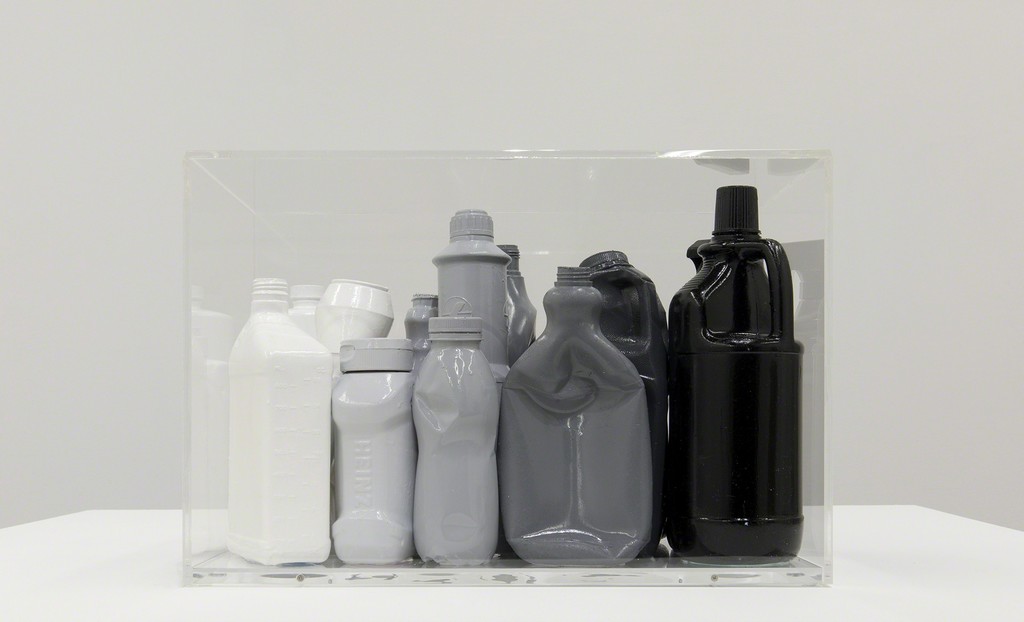 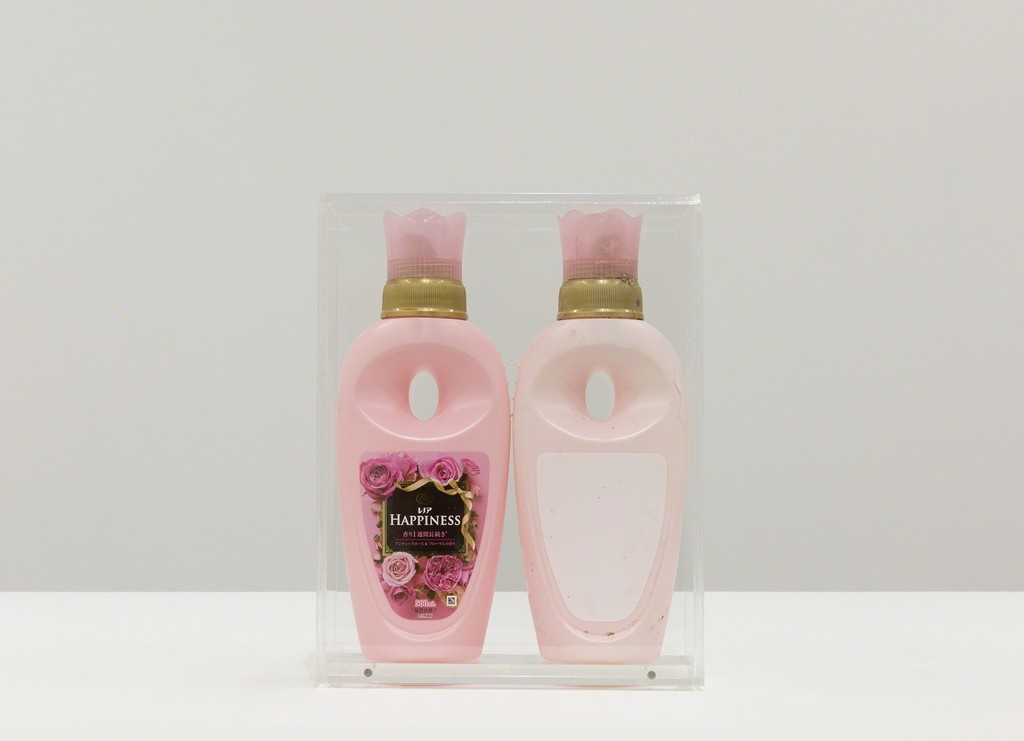 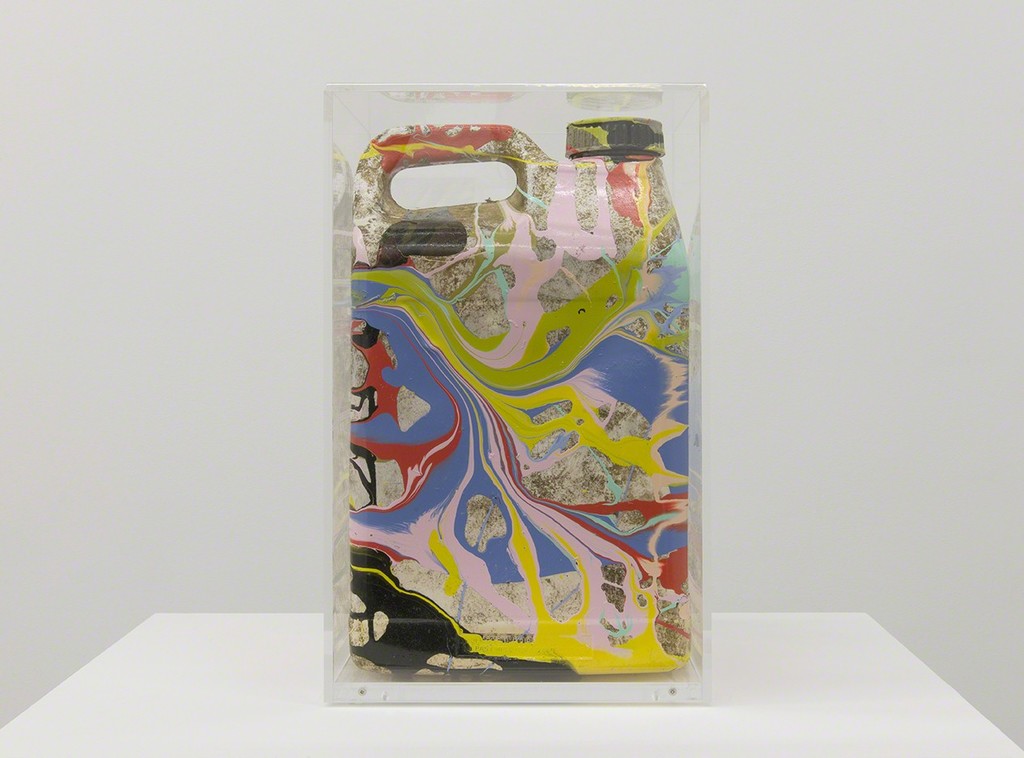 In 1966, Andy Warhol presented Silver Clouds at the Leo Castelli Gallery in New York, an installation intended to mark the artist’s departure from painting and his foray into film and experiential works. The installation (a collaboration with engineer Billy Klüver) is comprised of fifteen helium-filled metalized plastic film balloons that float, bounce, disperse and gather along the room, pushed by strategically placed air currents as well as the viewer’s touch. At the time, the work was read as being lighthearted and playful. Like the title suggests, Silver Clouds was the visualization of one drifting through the sky, clouds blowing past. It was the whimsical transformation of an advanced post-war utopian material— we now call it foil or mylar— otherwise used by the U.S Army and NASA to protect their rations. Looking back, one wonders if Warhol was imagining (foreshadowing?) the future: the omnipresence of plastic and the ways it would eventually waft, wash and migrate along borders; deflation and eruption hanging gently above our heads.

In one of Silver Cloud’s most recent re-presentations, it has been interpreted as a kind of aquarium, “the metallic balloons float freely through space, casting reflections, mimicking the immersive feeling of being underwater. Balloons seemingly follow each other around, creating schools and catching currents across the room.” This makes me think of the Great Pacific Garbage Patch, or Pacific Trash Vortex as it is also known, a gyre of plastic and chemical debris that has collected over years and formed a mass (“twice the size of Texas”) in the central North Pacific Ocean, discovered approximately in 1987, the year Andy Warhol died. When one searches for images of the conglomerate nothing more than map renderings appear since it stretches down to the bottom of the ocean and is low density which essentially makes it undetectable to satellite imagery. But even without a face, its presence is fully felt, evinced by the increasing endangerment of marine and wild life. It is, once like the idea of walking through the sky or space, a phenomenon without visible form.

This spring, artist and novelist Douglas Coupland will transform the Vancouver Aquarium into a vision of the Great Pacific Garbage Patch. Since the year 2000, Coupland has travelled to Haida Gwaii, an archipelago in Northern British Columbia, where he combs the shores for wreckage of a consumerist society gone awry. He collects plastics and disposable materials that have washed up and wreaked havoc on our precious birds and sea creatures, turning his findings into lamps, stacks and hutches that are as mournful as they are beautiful. More recently Coupland has noticed an increase in washed up Japanese materials, most likely the volatile remains of the devastating 2011 Tsunami in Japan. At the Vancouver Aquarium, one of the central, now mammal and fish-free tanks will be filled with twenty tons of the artist’s found rubbish from Haida Gwaii. Specifically installed jet streams will shift the tank’s contents, simulating the ocean’s turbulent course. The waste will float, bounce, disperse and gather along the tank, fragments flowing into one another like an overwhelming and exhausted assemblage, or crowd.

For Tsunami, the artist’s fifth solo exhibition at the Daniel Faria Gallery, Coupland continues to parcel the pressing issues of our times into pop packaging. In 2014, he began the Trash Vortex series, a number of vintage globes altered by oozing drips of paint poured from the point of the Pacific Trash Vortex. These colourful globes were seen as a rumination on the cruel beauty of the man-made world. Almost three years later, the series has been extended to single bits of Tsunami debris that have arrived on Canadian shorelines, taken in by Coupland and meditated on. Through painterly treatments, these objects acquire a new seductive edge. They have been splattered and dunked in Coupland’s now well-known candy-colour acrylic paint. Pushing the work further, they have been treated in more plastic. Each one of them is sealed in a custom plexiglass case, which suggests the beginnings of a Matryoshka doll effect that is in our midst: plastic encasing plastic protecting plastic within plastic….

Spread throughout the main gallery space, this composition looks like lollipops that glisten and tempt from behind their clear wrappers— false promises of sweetness and pleasure whirling. Consuming too many lollipops can cause tooth decay, remember? Looking at each of these objects individually and more closely, they also call to mind images of birds bathed in oil spill residue, a memory that is close to the artist and replays often in his mind. Shininess and stickiness turned brutal.

I’d like to turn to a moment that replays often in my mind when I think of Douglas Coupland, our exchanges, his work and the world, generally. It was at the Daniel Faria Gallery during a book launch of his most recent book, Bit Rot. Admittedly I was running late for the event and tried to conspicuously slip into the moment. Coupland was reading an excerpt from his new book, a short essay titled, Vietnam. Just as I settled in, Coupland choked up, filling the air with that silence we recognize as preparation for words that are difficult to say. Finally, he read:
” I-you-we-anyone could be a coral reef, a cuttlefish, a gust of pollen or a bright yellow ant longer than my foot. I was alive! […] Now I’m gone, and I miss you, Earth. I miss you dearly.”