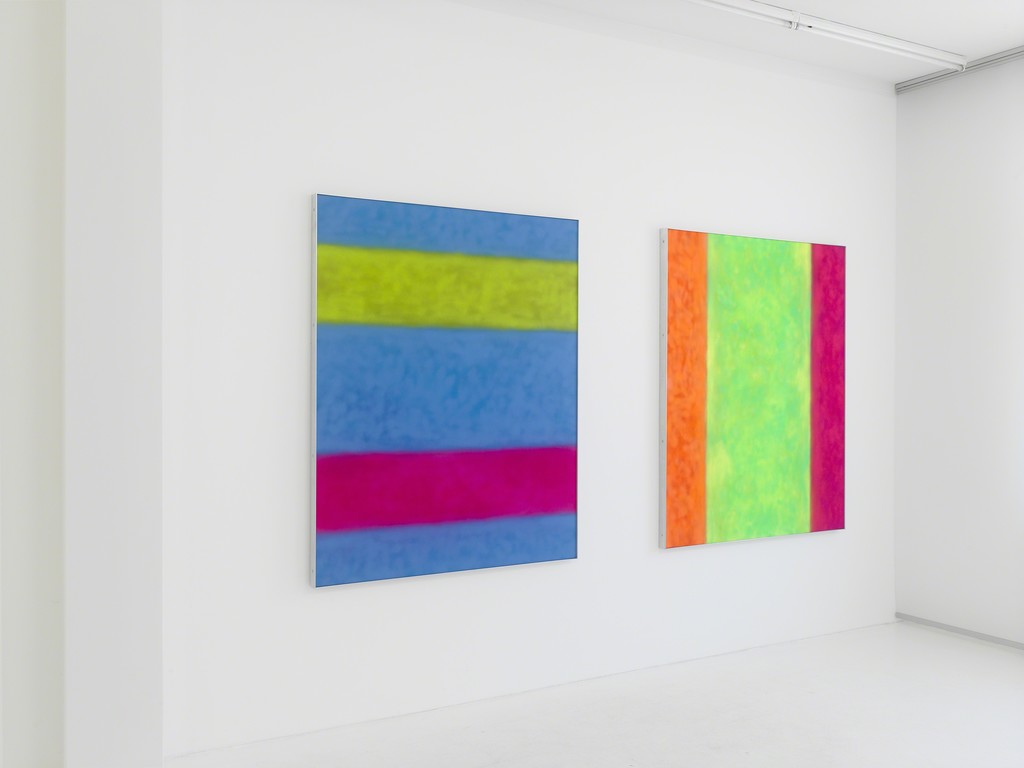 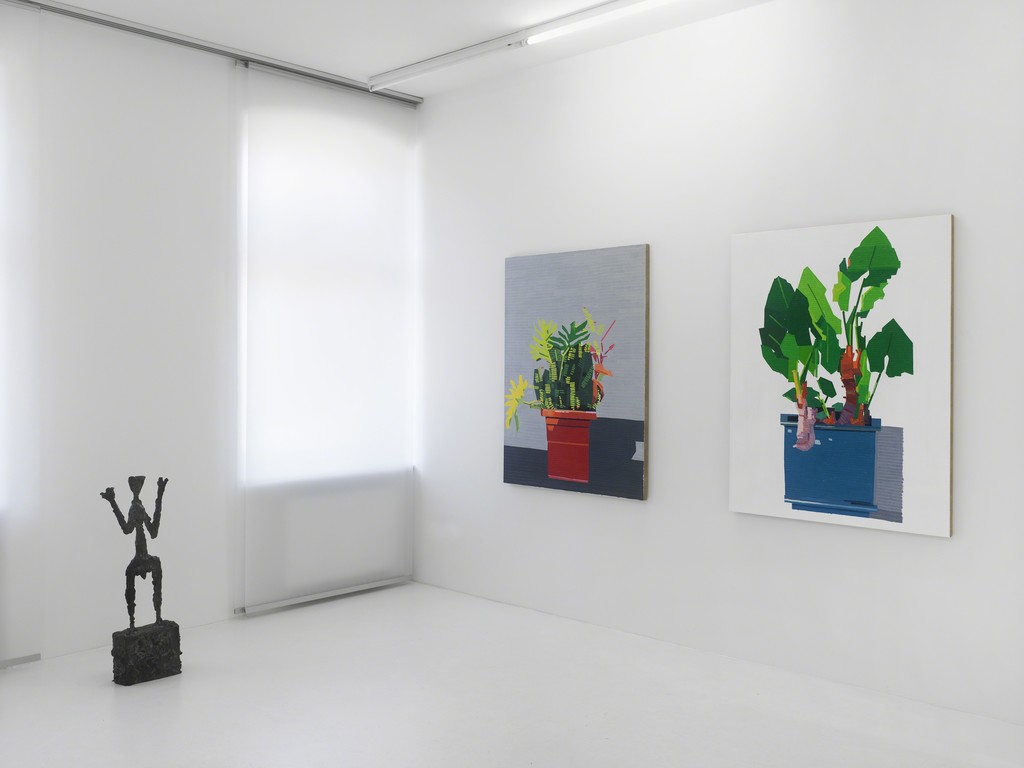 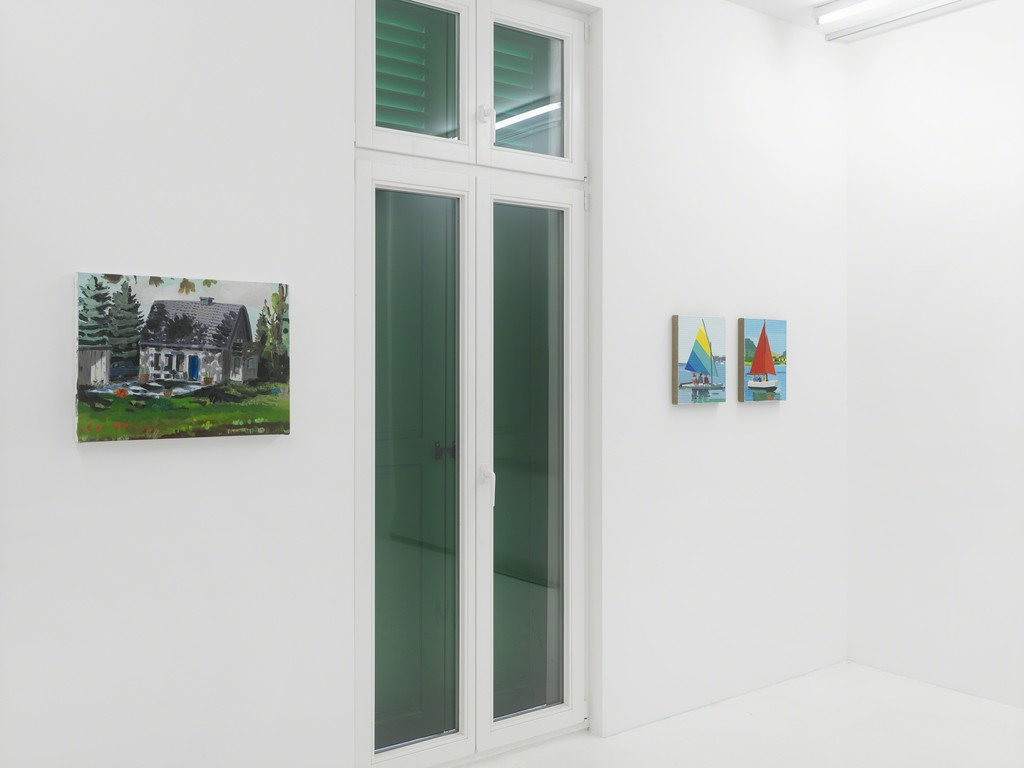 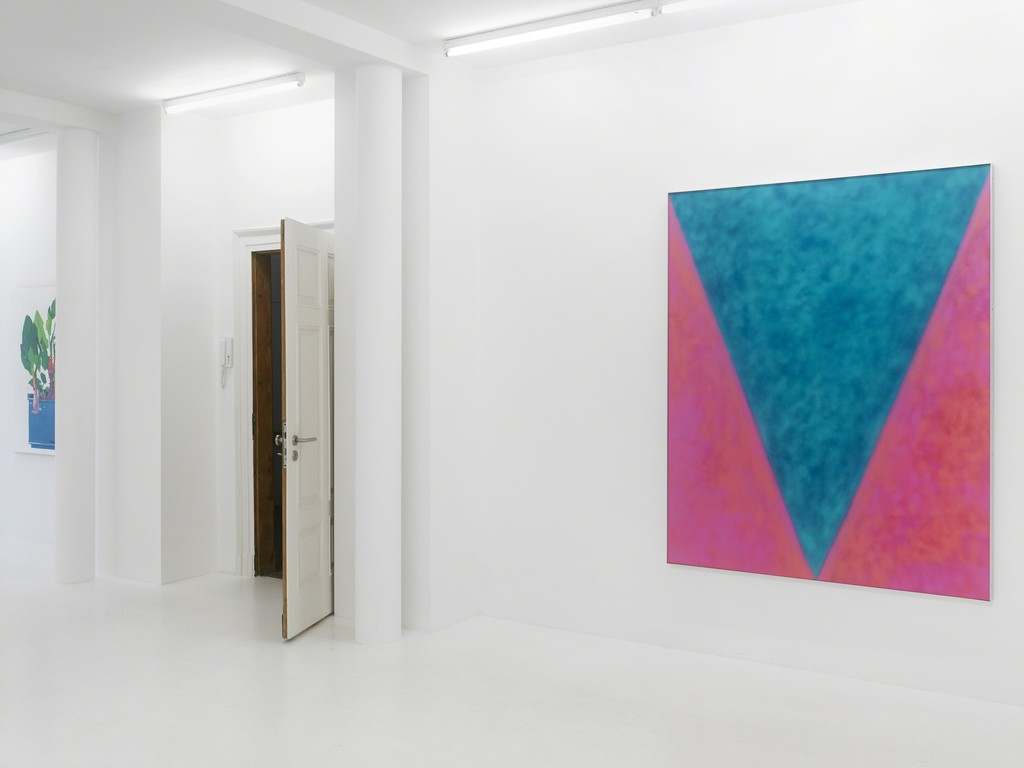 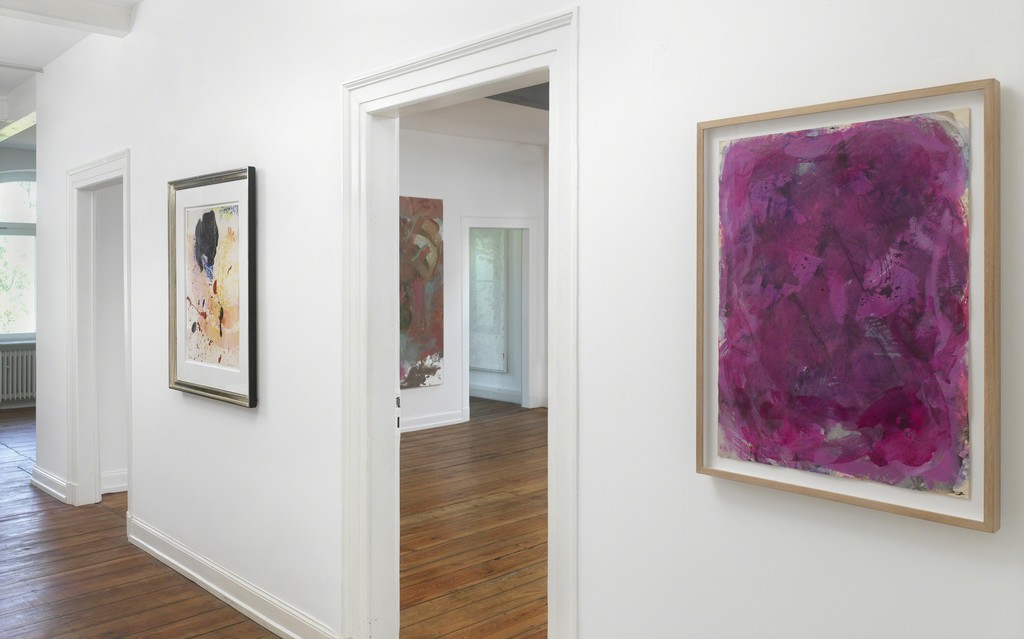 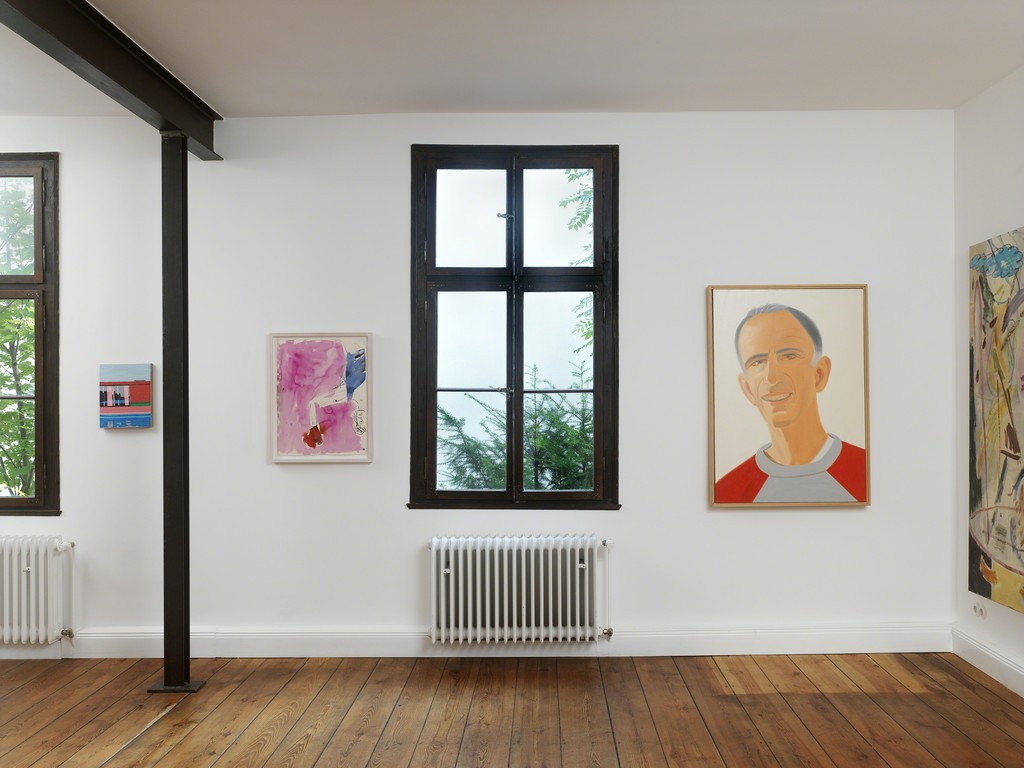 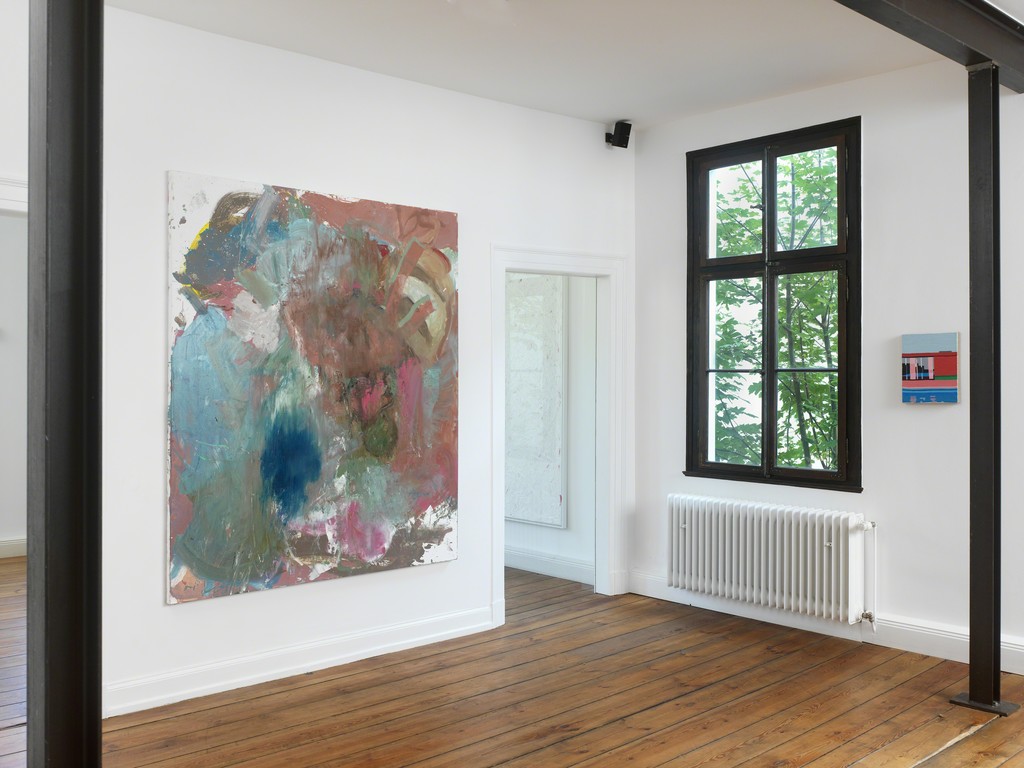 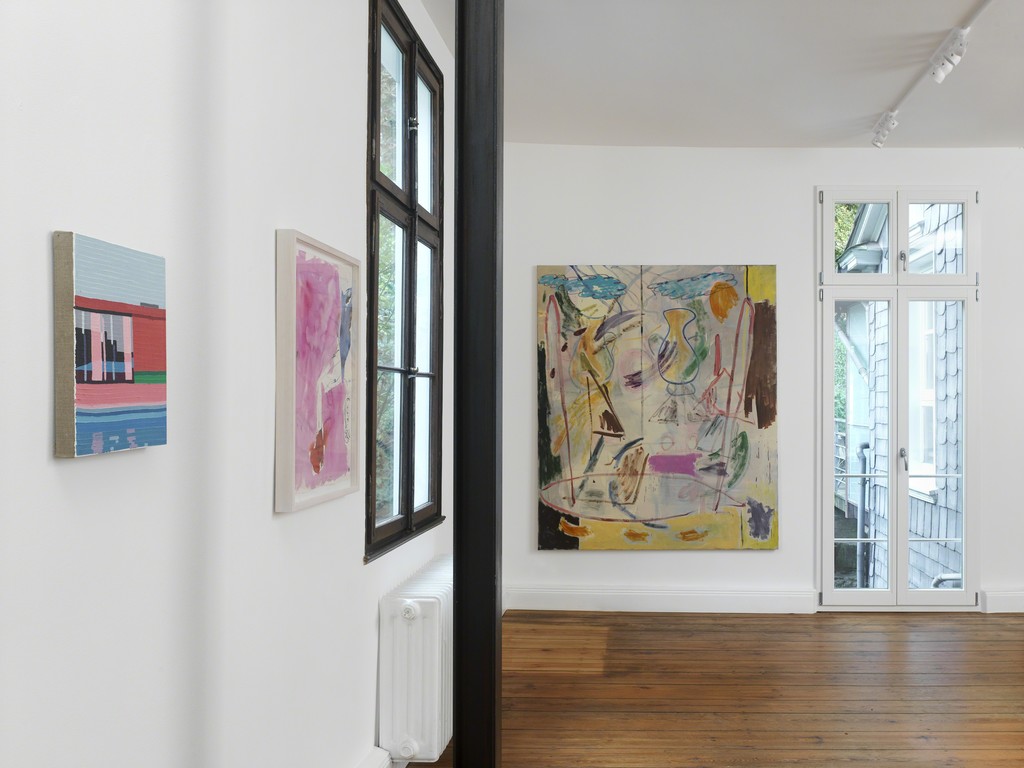 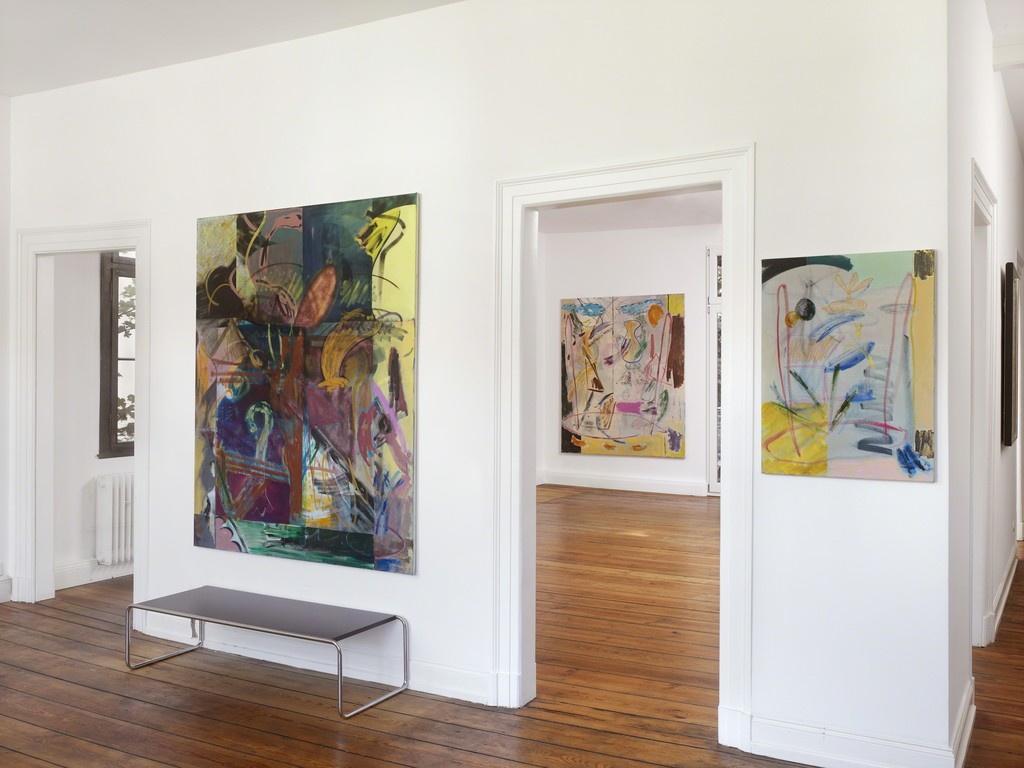 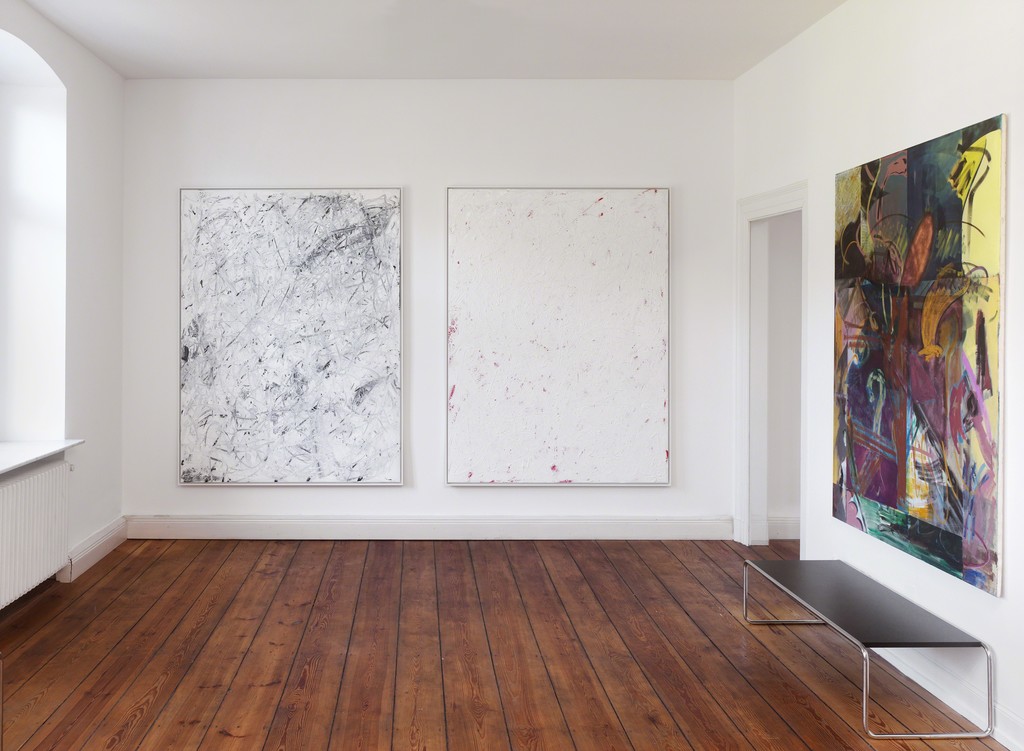 THE SPACE
David Achenbach and Anna Hagemeier are proud to announce the opening of David Achenbach Projects’ second exhibition of 2016. THE TIES THAT BIND, taking place in September and October, brings together works from the last six decades by thirteen international artists.
With THE TIES THAT BIND, David Achenbach Projects sets out to draw connections between abstract and figurative art and to showcase a selection of visual art spanning its multifaceted development from the post-war period to the present day.

THE ARTISTS
Georg Baselitz (b. 1938) gained a reputation as the enfant terrible of the art scene in divided post-war Germany. Since the beginning of his career as an artist in 1958, he has developed a non-conformist method of representation that is informed by a range of contemporary movements. He achieved fame from the mid-1970s with his “upside-down” paintings. By inverting his canvases, Baselitz frees them from their conventionally ascribed subject matter and renders them non-representational, almost abstract. Themes of art history are abrogated, but never quite done away with.
Sam Francis (1923–1994) studied under Mark Rothko and Clyfford Still in 1950s California. Unlike his Abstract Expressionist American contemporaries, his works do not particularly focus on momentary psychological impulses. Instead, Francis is interested in the poetry of colour modulation and in putting colour itself at centre stage. “Colour is a pattern that plays across the membrane of the mind”, as he once put it. In the 1960s, he began to develop an extremely personal form of spontaneous, gestural dripping (applying paint with splashing and circling motions), working with formidable, aesthetic calculation.
Gotthard Graubner (1930–2013) also experimented with methods of applying paint in his abstract works from the 1960s onwards. He started out with watercolours on paper before moving to canvas, then left the two-dimensional sphere entirely with his Kissenbilder, or Cushion Pictures. Like Francis, colour is the focus of Graubner’s output and the favoured subject of his painting, which he did not consider to be a means to an end. He placed the emphasis instead on colour’s materiality, encouraging its self-emancipation from shapes and figurative representations. Graubner succeeds in developing an independent existence for colour, entirely freeing it from the need to represent anything but itself.
The painter Daniel Heidkamp (b. 1980) lives and works in New York. Inspired by the techniques of the impressionists, he begins his search for his figurative motives by painting en plein air, i.e. outdoors, precisely when he perceives an everyday moment to be exceptional and almost “transcendent” due to lighting or other conditions. He intensively studies the effect of light and its transposition on the background, taking established painters such as Alex Katz as his role models. Unlike many of his contemporaries who often produce abstract paintings and incorporate new media and technologies into their technique, Heidkamp subscribes to the traditions of such artists as Edward Hopper, David Hockney and Peter Doig. His works were most recently shown at the Half Gallery in New York.
Alex Katz (b. 1927) also lives and works in New York. Like his young colleague Heidkamp, he goes against the grain of his contemporaries as an American figurative painter, but has done so since the late 1950s. Unfazed by the Abstract Expressionists of the first New York School, such as Willem de Kooning and Jackson Pollock, with their emphasis on spontaneity, intuition and obsessive energy, Katz focuses on perfection and reason. It is not his intention to renounce the object in the process, preferring instead to portray the human subject and remain strictly figurative. With his bright, luminous colours, he became a role model and pivotal figure of the early Pop Art scene from the late 1960s.

The New York–based artist Rosy Keyser (1974) breaks down the viewer’s familiar patterns of perception in her works by quite literally taking the canvas apart. She collages a wide range of materials of suburban origin, such as sand, sawdust, rope, wood and cardboard, and only rarely has occasion to use a paintbrush. The physicality of the painting thus becomes a framework for expansion and intervention; the canvas is radicalised along the lines of Fontana or Rauschenberg. Her works have most recently been exhibited at the CFA Berlin and at Maccarone in New York.
A.R. Penck’s (b. 1939) works in the show date from the early 1960s. Since then, he has developed a visual language characterised by ciphers that seek to create a concise and truncated depiction of the world. Pared-down figures reminiscent of prehistoric drawings – almost “stick figures” – typify his creative output. From 1977, he began to transfer his motifs into three dimensions, starting with wooden sculptures and then casting these in bronze from 1982.
Jon Pilkington (b. 1990) is the youngest artist featured in the show. His work is characterised by colourful paintings rendered with a gentle colour palette. His paintings are adorned with sketch-like, figurative drawings that give rise to his multi-part compositions on canvas. Pilkington thus creates a unique creative space dominated by form and texture. In contrast to their subtle hues, the pigments he uses are gritty; Pilkington mixes them right on the studio floor. He already had a solo show this year at 247365 in New York; he will also be exhibiting at the COMA Gallery in Sydney in September.
In his new series of HTML paintings, Kasper Sonne (b. 1974) explores the division of public from private, mechanical from manual, immaterial from material, virtual from real. Sonne first creates his abstract works using computer graphics programs in response to modern standards for speed and efficiency. He then downloads selected designs to his smartphone and attempts to transfer them to canvas with manual techniques. He thus manages to tease out the contrast between swift technological processes and time-consuming, hands-on studio work. Sterile, anonymous and flawless computer images are transformed into poetic, personal works with ties to traditional Colour Field painting as practiced by Rothko and Newman. Sonne’s works were displayed this year at the Herning Museum of Contemporary Art in Denmark.
Chris Succo (b. 1979) is a master of abstraction and versatility. Hailing from Düsseldorf, this internationally acclaimed artist creates dynamic works that innovate on the lyrical, gestural art of the post-war period. When regarding his paintings, the painting process unfolds with its unmistakable dynamic movements and rhythm and is accentuated by the constant repetition of form and technique. Brushstrokes of varying thickness, etched into thickly applied wet paint in muted shades, leave thick droplets of paint, while the spray-painted background shines through elsewhere. Alongside numerous international exhibitions this year, his works were most recently showcased at the Kunstverein Heppenheim and at the Journal Gallery in L.A.
Norbert Tadeusz (1940–2011) was one of the most important figurative painters of the post-war art scene and a disciple of Joseph Beuys. His paintings are characterised by the intensity of their colours. The primary subject of his work is the human body, which he depicts in a Mannerist way in exaggerated positions and perplexing poses. In his large-format paintings and his equally important works on paper, Tadeusz – unlike many of his artistic contemporaries – remains true to the figurative representation.
Anke Weyer (b. 1974) is a German abstract painter who lives and works in New York. Prior to this, she was a student of Per Kirkeby at the Städelschule in Frankfurt. Weyer breathes life into her large-format pictures with energetic brushstrokes that drip paint onto the canvas, smudging it gently or rubbing it roughly. In 2015, she had a residency at the Elaine de Kooning Studio in the Hamptons, and her works were displayed in Basel and at the Mier Gallery in L.A. in 2016.
Guy Yanai (b. 1977) is an Israeli figurative artist whose paintings are characterised by vibrant colours and clearly structured, recognisable brushwork. His simplified portrayals of everyday items and settings appear objective and pared-down. His representation can be seen an attempt to channel and organise the flood of data and information constantly bearing down upon us and to condense it into compositions that are distilled to their essentials. This year, his works have been shown at the Rod Barton gallery in Brussels and the Galerie L’Appartement in Paris.