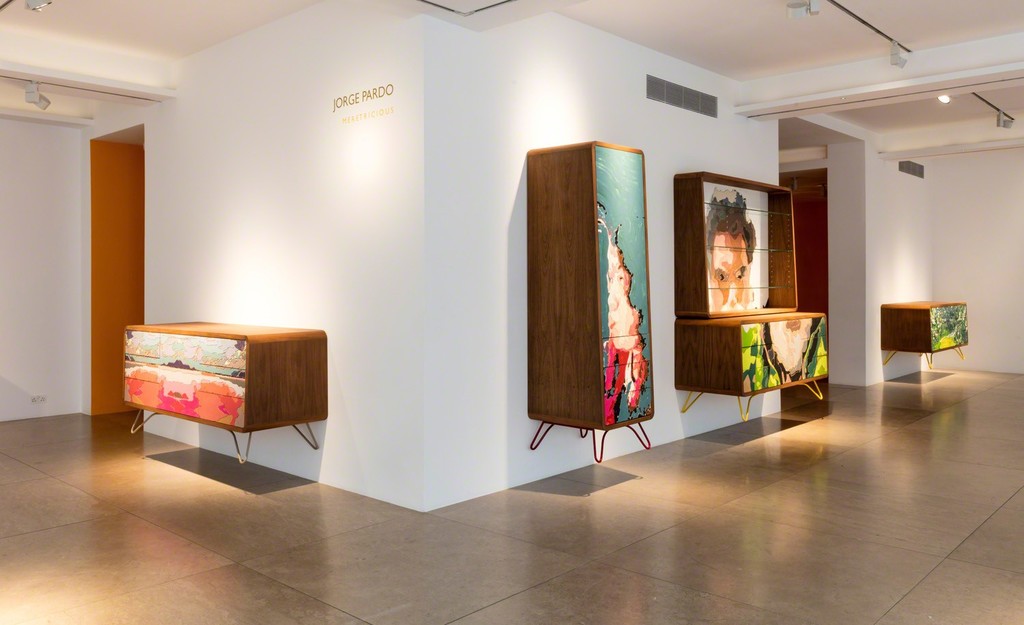 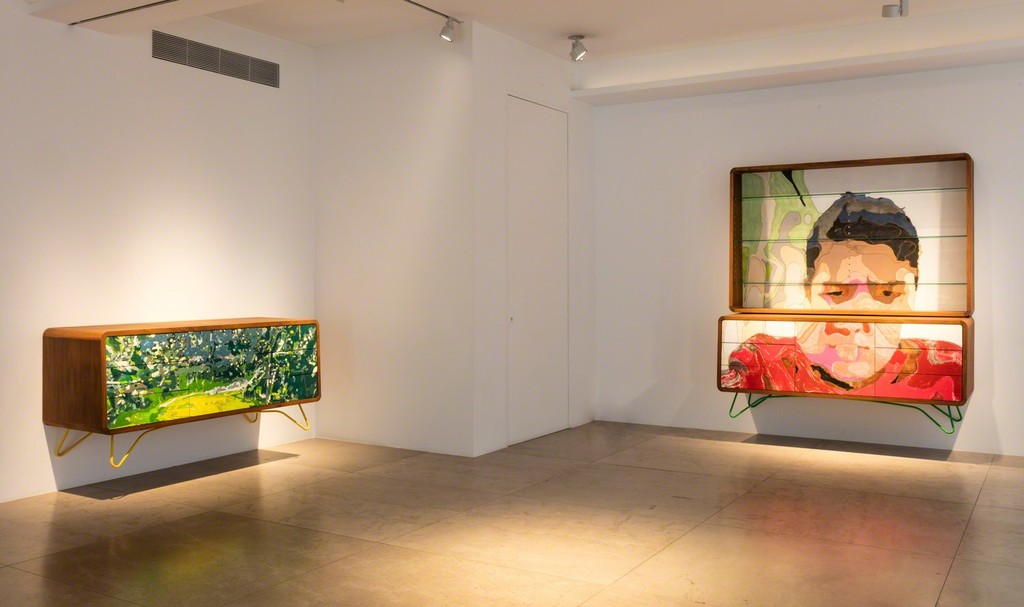 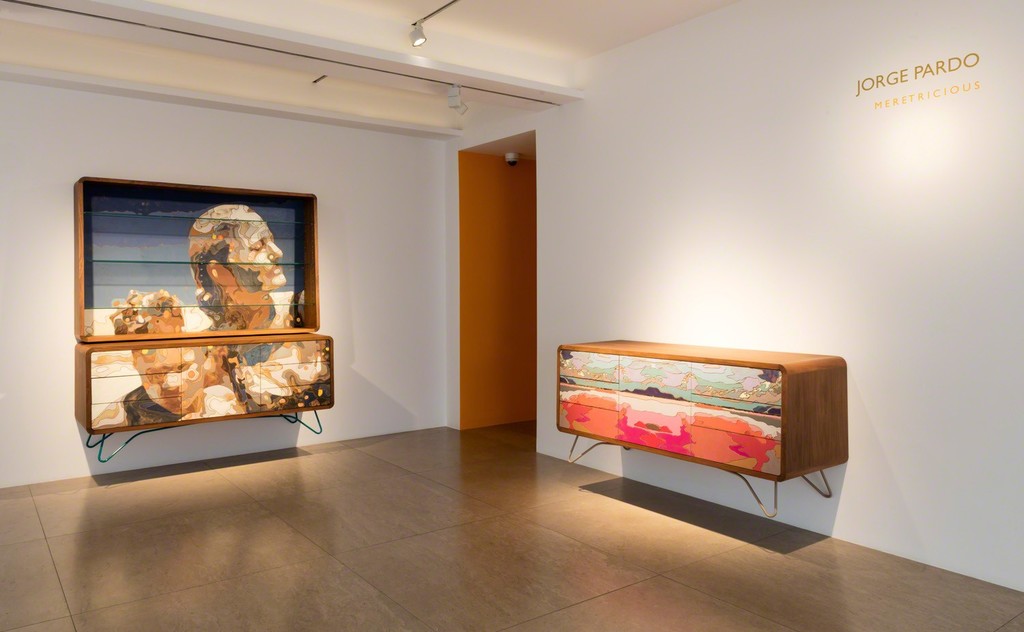 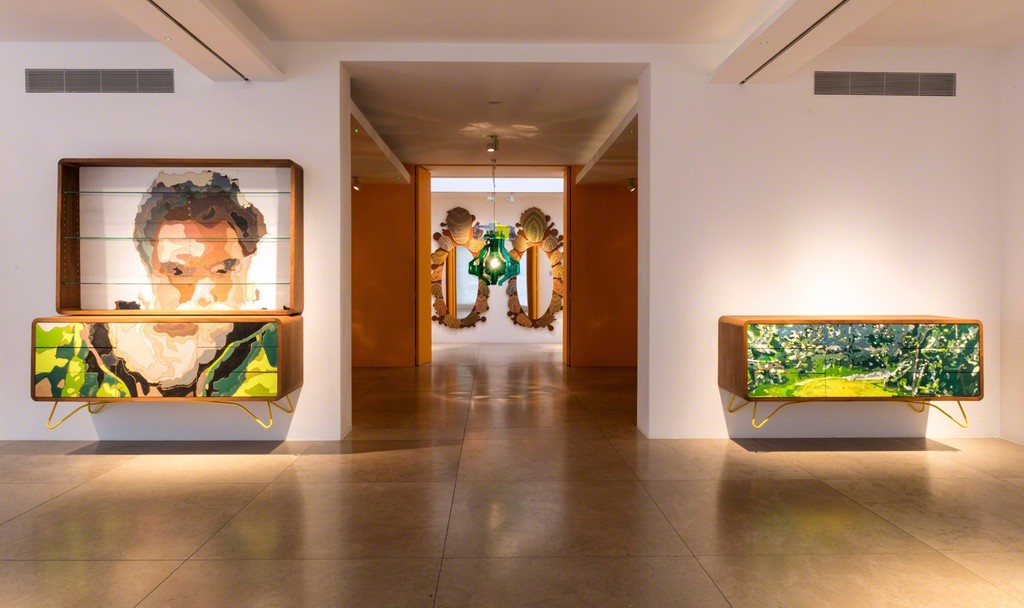 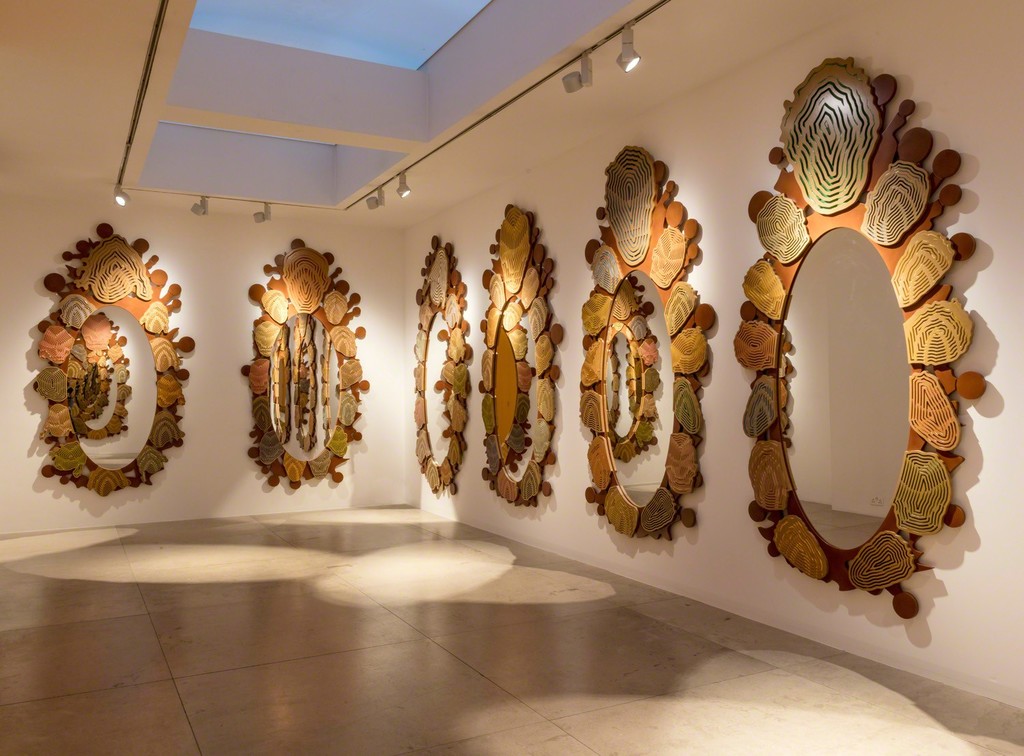 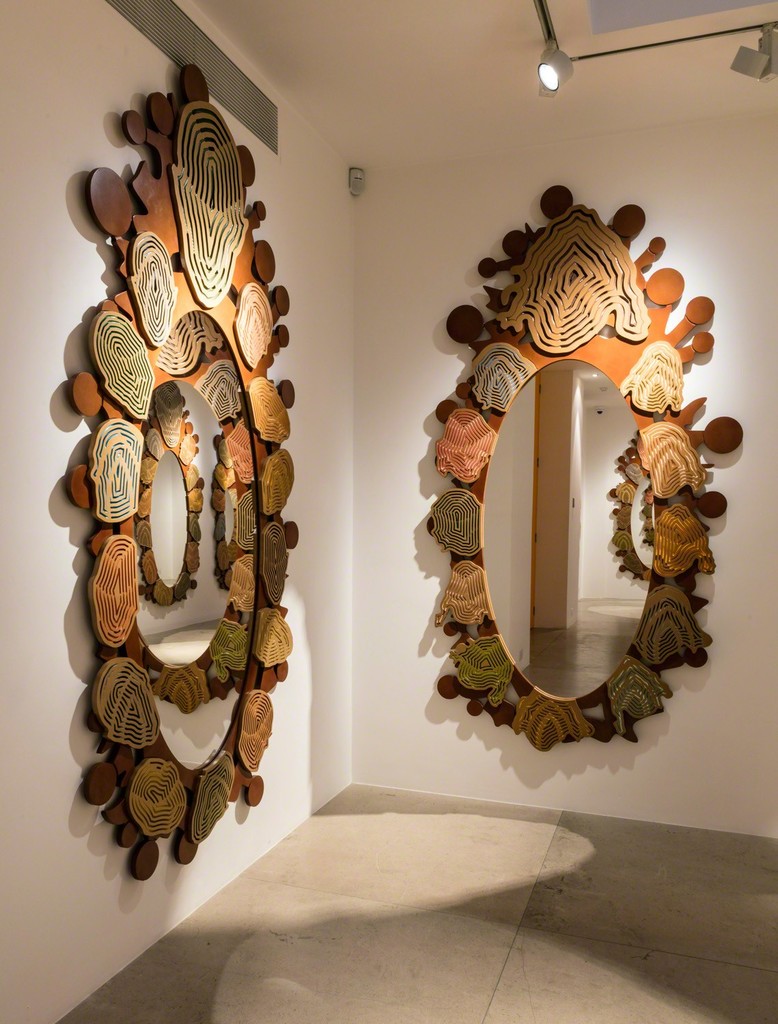 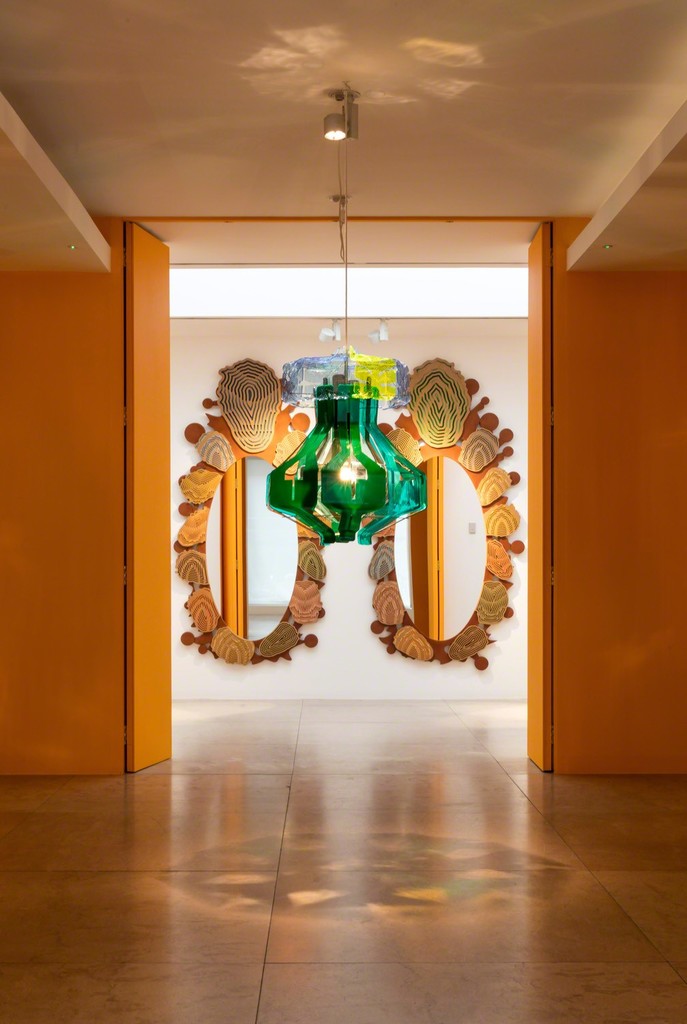 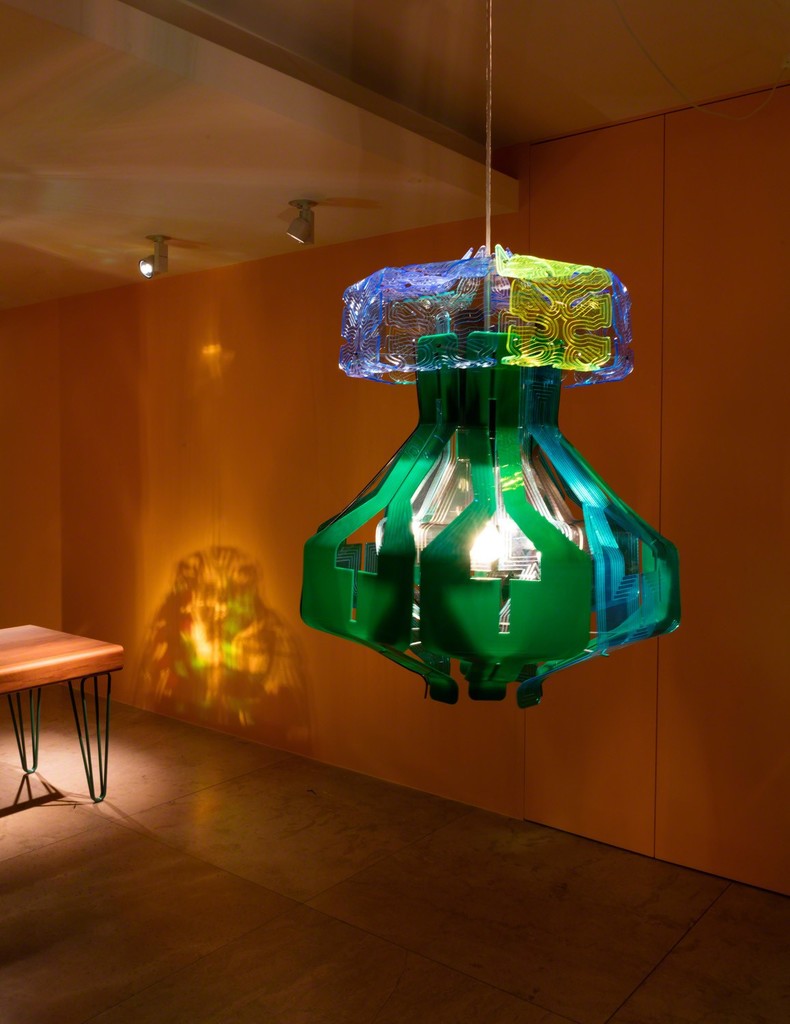 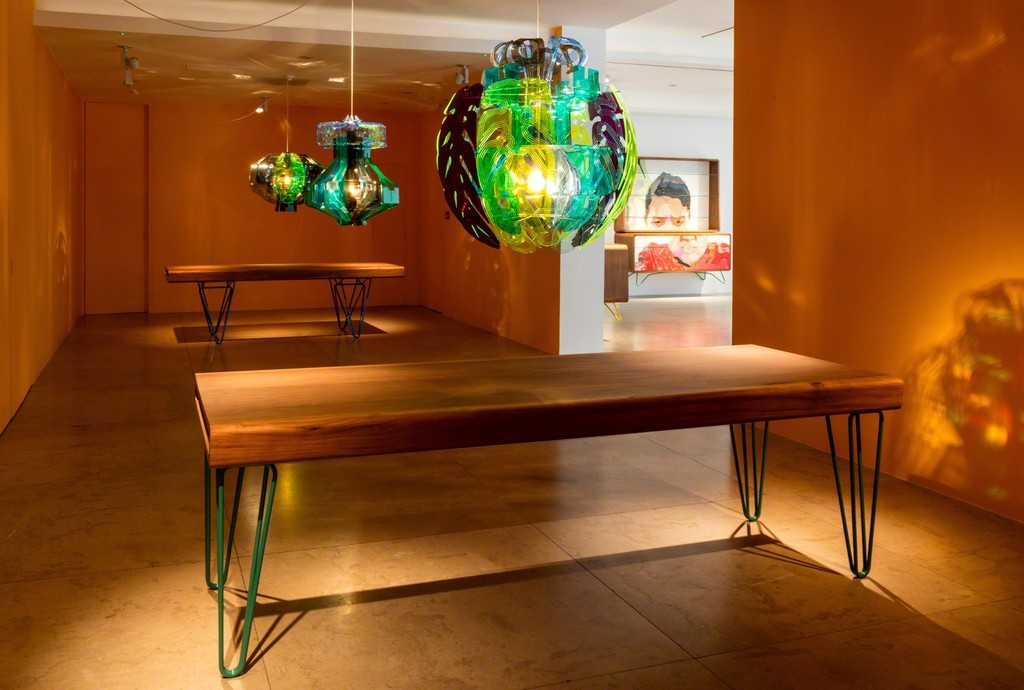 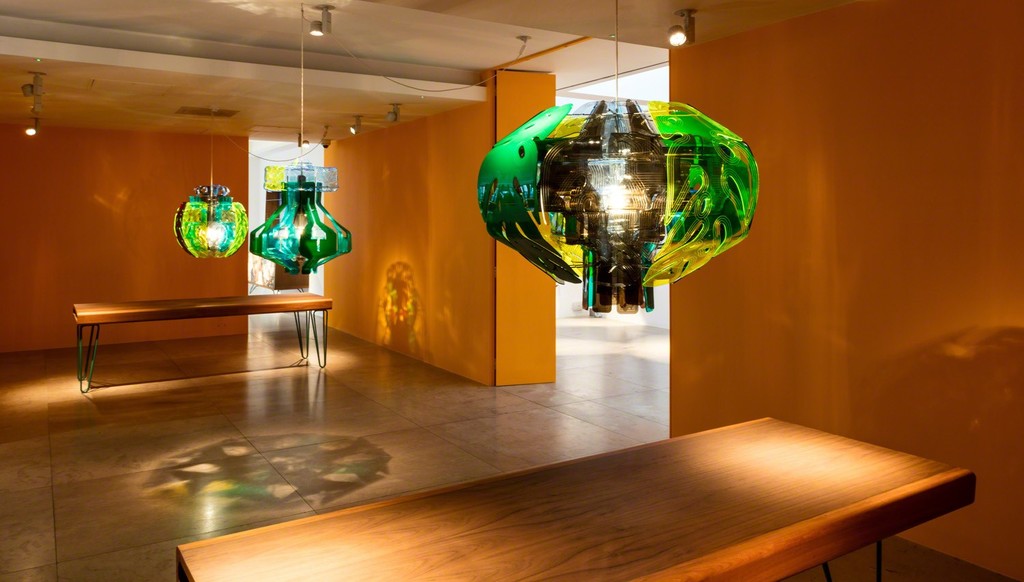 David Gill Gallery is pleased to announce an exhibition of new work by Jorge Pardo, his first solo show with the gallery and his first in London for seven years. 'Meretricious' features a surreal installation of twelve wall mirrors with sculptural frames invoking the heads of the artist’s favourite critics past and present. Combining abstract beauty and provocative depth, the installation reverberates with multiple dimensions of experience.
Pardo says: “I thought it would be interesting if this show took on the role of a convoluted portraiture machine with all the works having different forms of portraits. The mirrors are portraits of critics, the furniture with portraiture of my family
and the tables will have images of me...some of the furniture will also hang from the
wall like paintings.”

Like a latter-day Frank Lloyd Wright, Jorge Pardo has devoted himself as an artist to
creating entire living environments as well as individual works. Always eager to explore aesthetic possibilities at the intersection of technology and craftsmanship, Pardo was
one of the first sculptors of his generation to bring advanced computer technology into the art studio so as to exponentially expand his vision. The result is an exuberant synthesis of technology and thought fashioned into colourful sequences and combinations of life-enhancing objects of reflection. Pardo's most ambitious projects to date are houses conceived as works of art: sculpture as site-specific architecture. His first such commission was a horseshoe-shaped house in Los Angeles titled '4166 Sea View Lane' (1998) lit with 110 hand-blown biomorphic glass ceiling lamps. Pardo describes ‘House' (2008) in downtown Merida, Mexico, the artist’s current home, as "a building transformed into a sculpture that is also a place of residence.” 'Tecoh' (2012), is an extensive series of new and adapted buildings made for a collector and built on the ruins of a 17th century Hacienda in the Yucatan. A utopian estate blending Mayan culture with ultra-modern design, Pardo installed his exuberant tiled surfaces and signature ceiling lamps throughout the property, which includes several adobe-walled guest cottages with roofs made from traditional thatched native palm fonds. Described by Pardo as "architecture without a program,” Tecoh marries the skills of highly trained local craftsmen using traditional techniques with the infinite possibilities of computer technology.

The commission of a new series of wall mirrors, tables and cabinets, fabricated in his studio in Merida for the David Gill Gallery, follows the Mayan Baroque idiom of 'Tecoh.' This “Hall of Mirrors" reflects groups of people as if multiplying their everyday rituals. Each oval mirror is framed with a constellation of twelve cerebral head scans of writers and thinkers including Hal Foster, Hans-Ulrich Obrist, food writer Jonathan Gold, and the great art critic of the modernist era, Clement Greenberg. Cut on a CNC router, a series of concentric lines are offset from a cross-section of each critic's head into an abstract pattern that amplifies the natural irregularities in the shape of the skull. "The patterns are random,” says Pardo. “When I work with patterns and colour my interest is density of irregularity. It's a simple system, which is really not much of a system: I choose a shape to disperse colour and any combinations of colour work.”

Jorge Pardo was born in Havana, Cuba in 1963 and studied at the University of Illinois, Chicago with a BFA from Art Center College of Design in Pasadena, California. Solo exhibitions include: 4166 Sea View Lane (1998) at the Museum of Contemporary Art, Los Angeles; Tecoh (2006) (2012) Yucatan, Mexico; House (2007) Miami MoCA North which travelled to the Museum of Contemporary Art, Cleveland in 2008; K21 Kunstsammlung Nordrhein-Westfalen in 2009; and the Irish Museum of Modern Art in 2010. Other projects include A Streetcar Stop for Portland (2014), Untitled (2012), The Kids Art Museum Project Hammer Museum, Los Angeles. Untitled (2008) the re-design of the pre-Columbian collection at LACMA. Pardo was exhibited at Gagosian Gallery, Beverly Hills, in 2003 and 2010. His work is included in public collections, including the Museum of Contemporary Art, Los Angeles; Museum of Modern Art, New York and Tate Modern, London. Jorge Pardo lives and works between Merida, Mexico and Los Angeles.