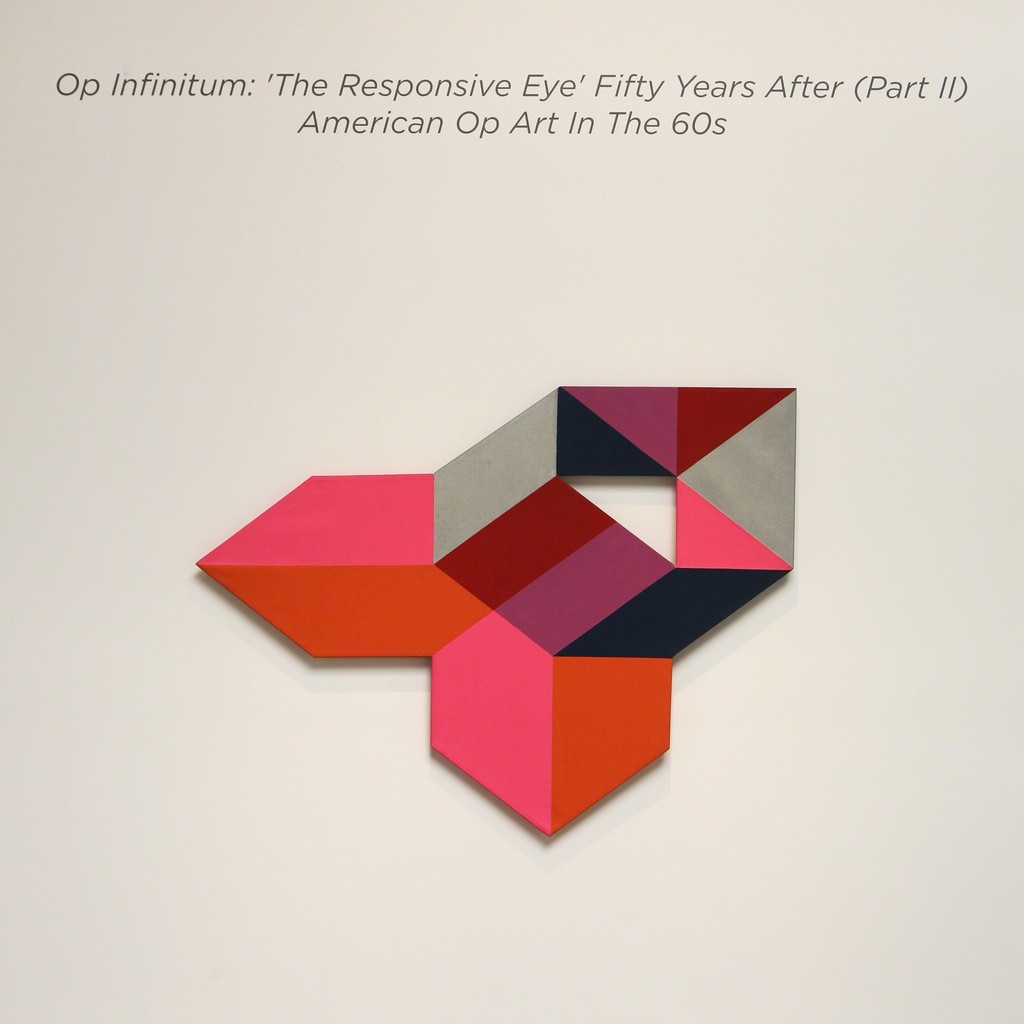 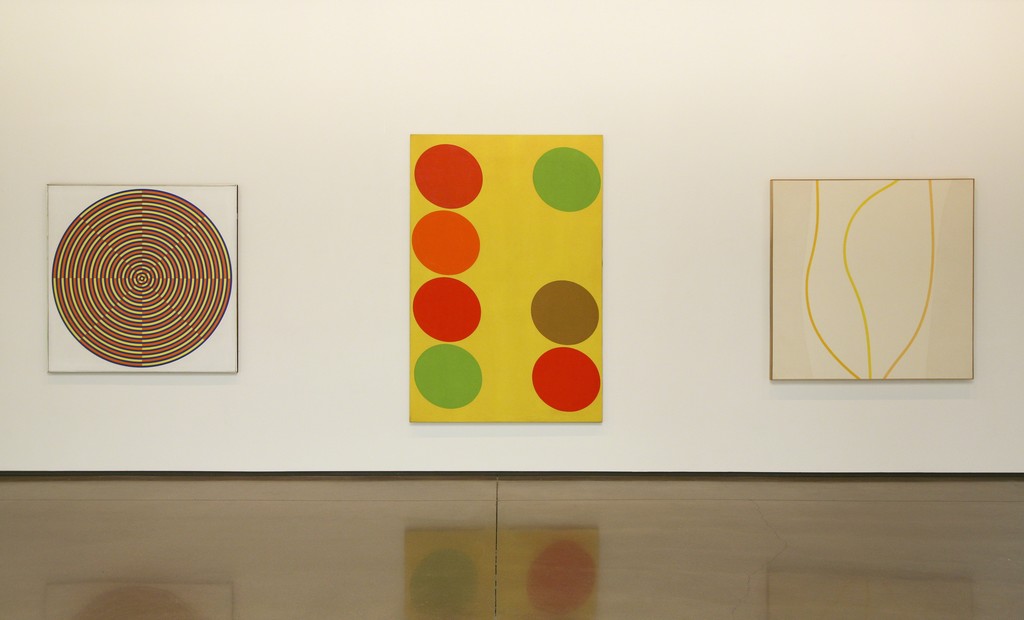 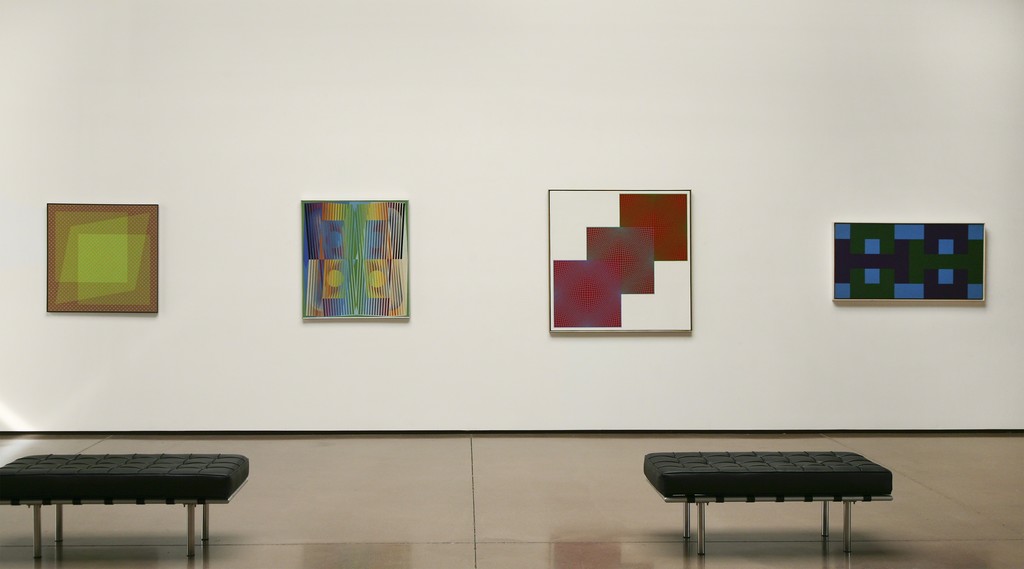 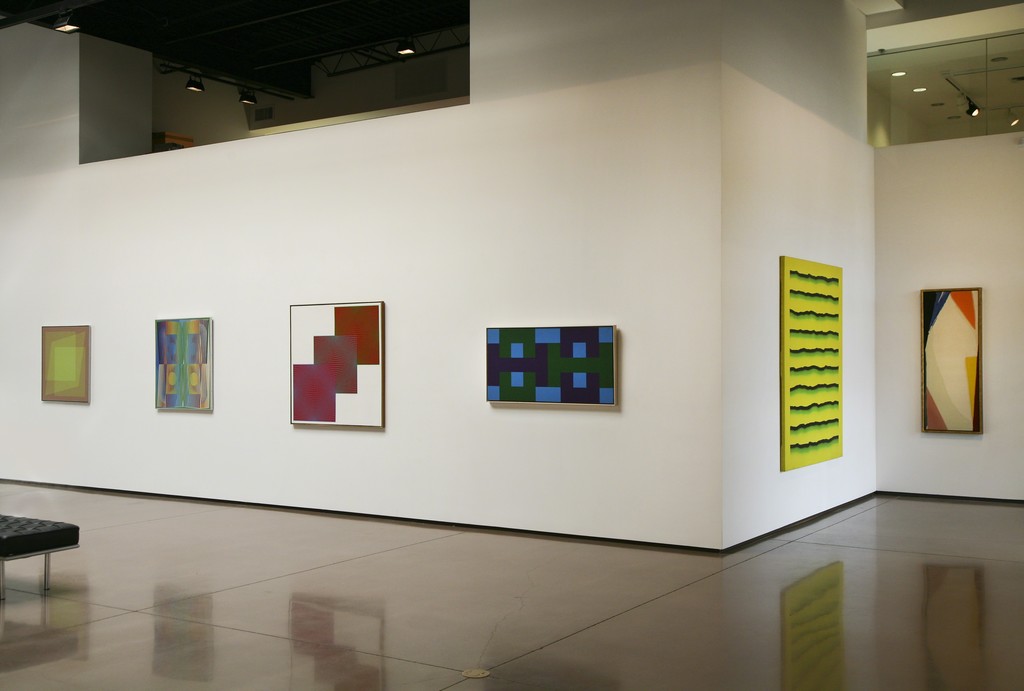 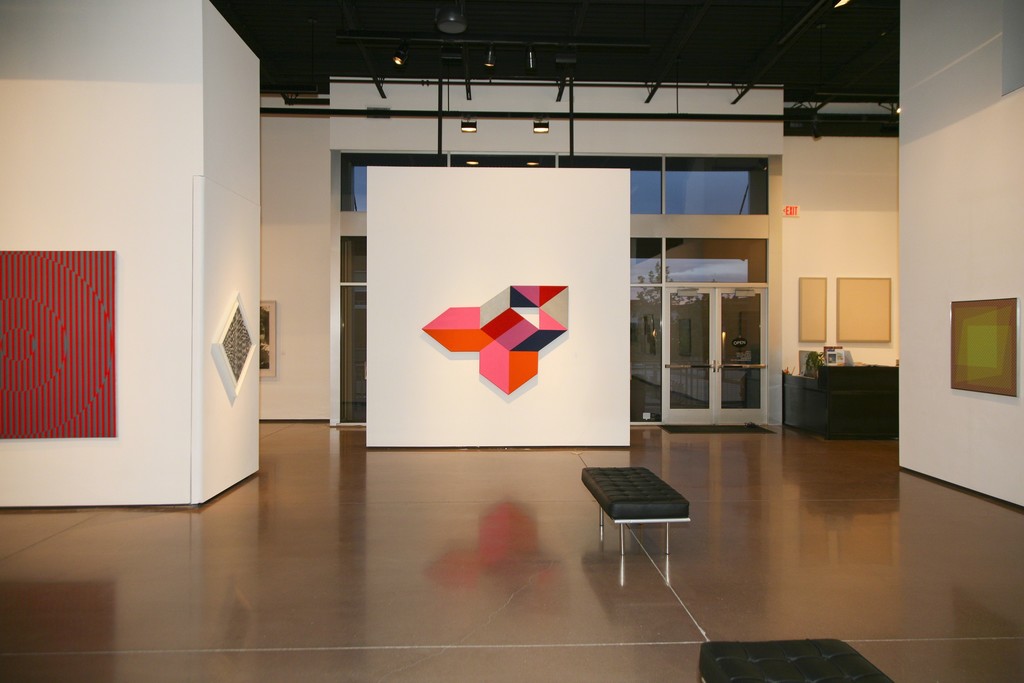 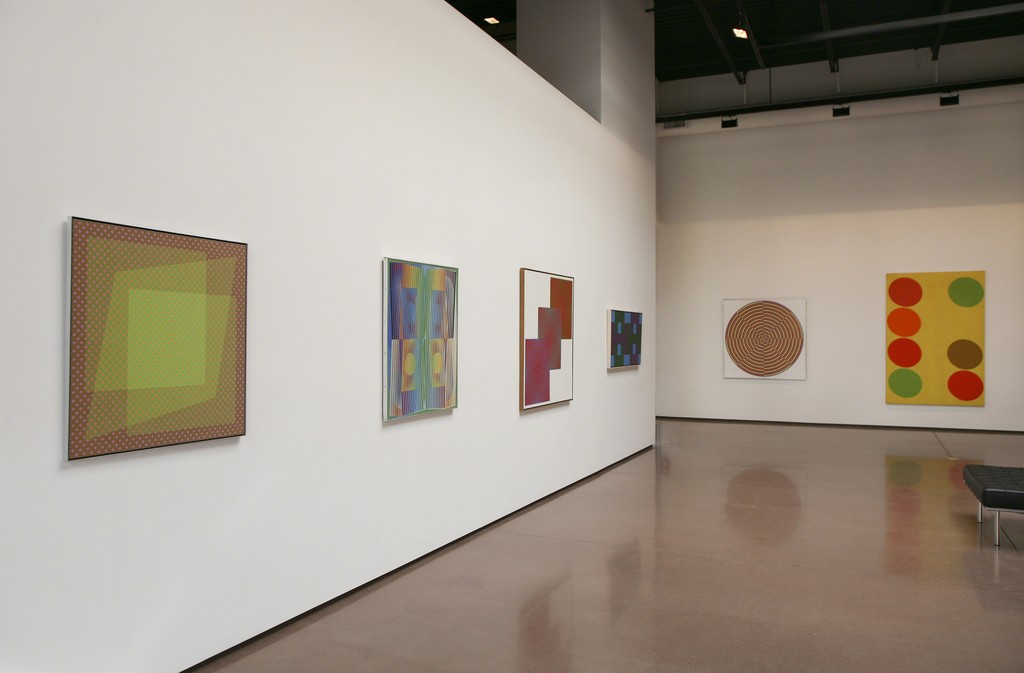 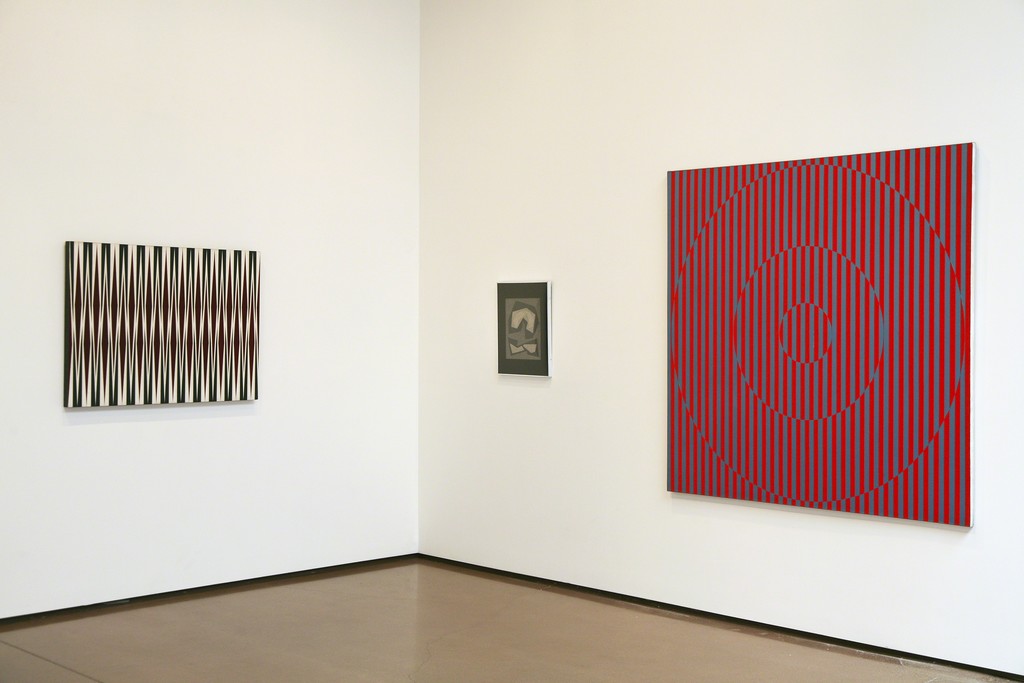 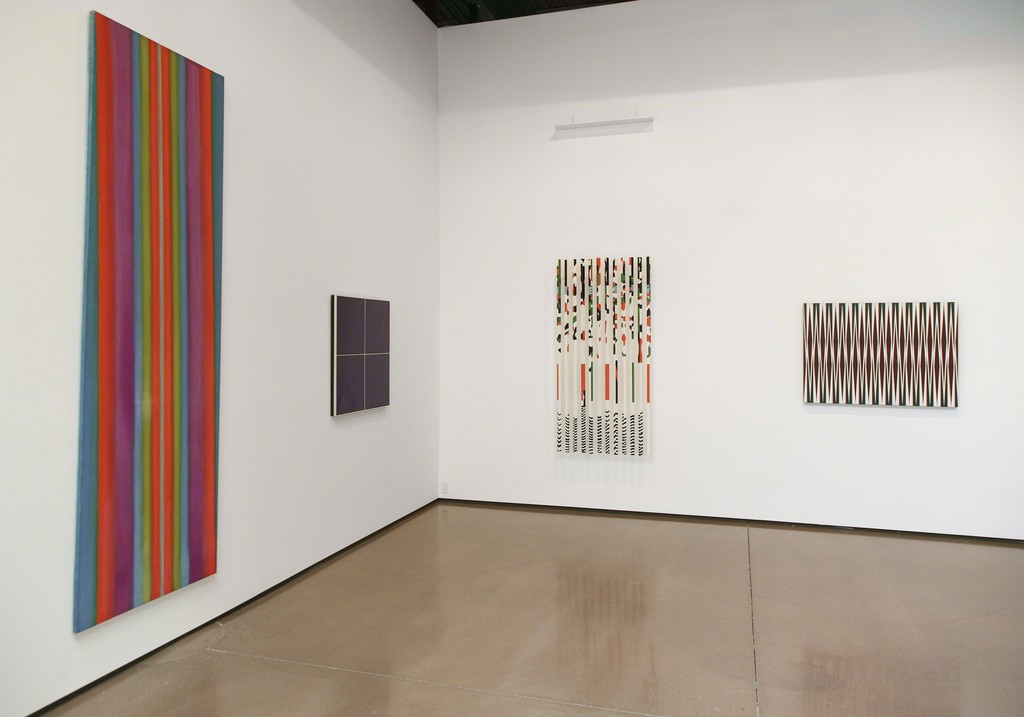 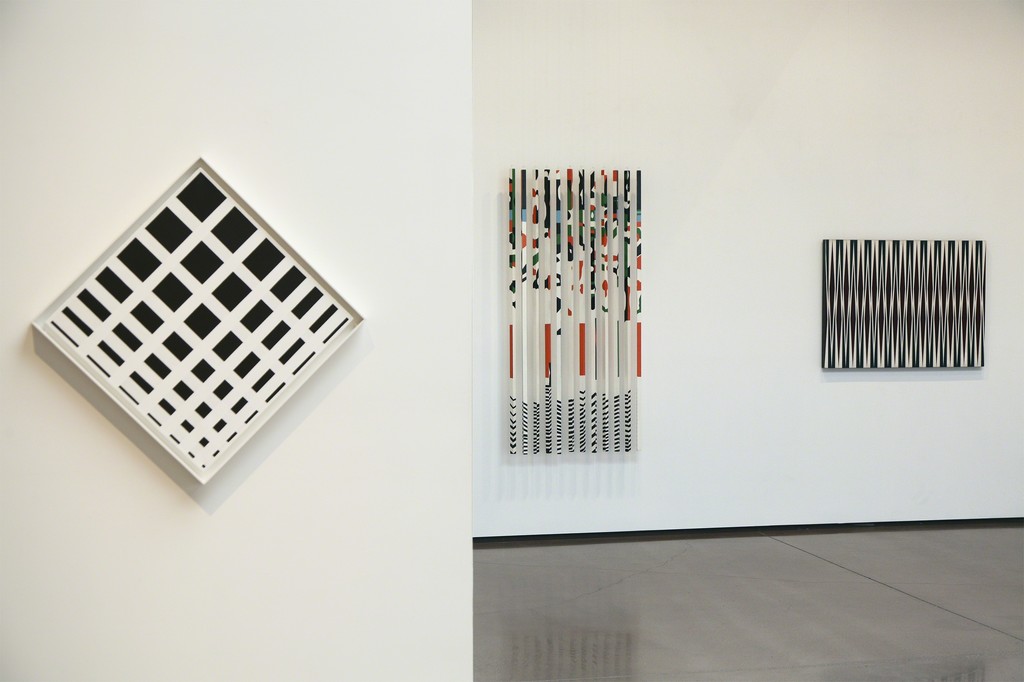 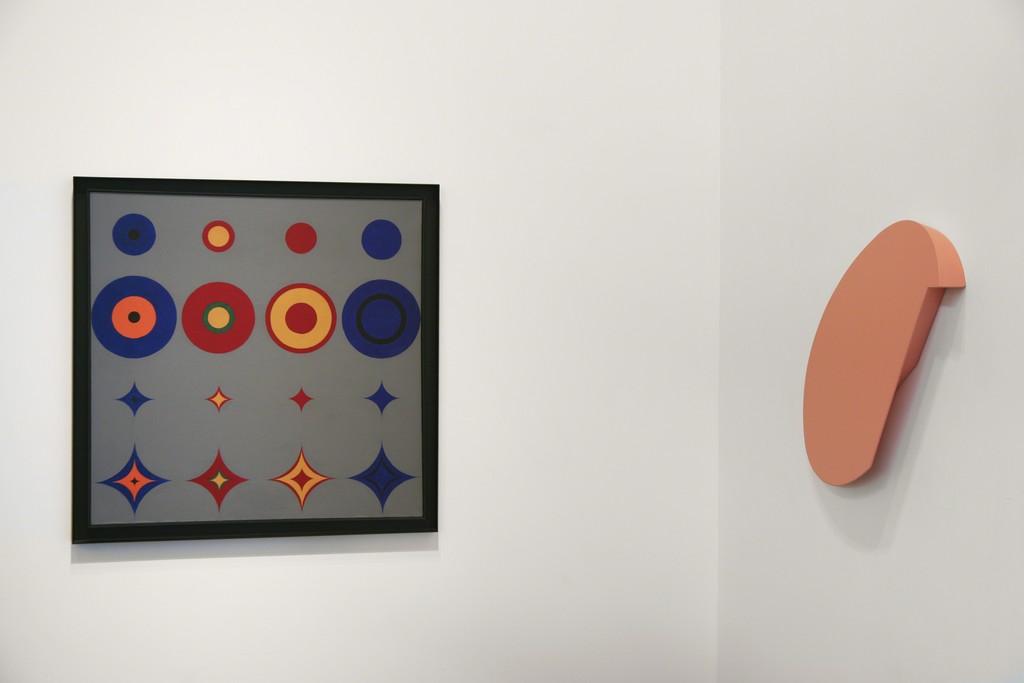 Featured in “Op Infinitum” are nine artists who were not included in “The Responsive Eye” exhibition at MoMA in 1965, yet their artworks are every bit as visually stimulating and mentally challenging as those presented in that seminal exhibition. The exploration of perceptual art was vast in the 60s and in many ways, this presentation is a continuation of “The Responsive Eye”, expanding the roster and recognizing the far reach of “optical” abstraction.

“Op Infinitum: ‘The Responsive Eye’ Fifty Years After” is the second installment of a four part series commemorating the fiftieth anniversary of the ground-breaking “Op Art” exhibition organized by William C. Seitz at the Museum of Modern Art in New York in February, 1965. The gallery’s first presentation earlier in 2014 focused on the roster of the “The Responsive Eye”, critically examining the artwork both during the 1960s and later in the careers of a group of American artists who were part of that seminal exhibition. This presentation moves beyond an analysis of the “roster” and turns toward the “spirit” of “The Responsive Eye” and that period of time in the early 60s as Seitz curated his presentation. David Richard Gallery’s sequence of exhibitions examining and reconsidering “The Responsive Eye” is organized by art historian, curator and critic Peter Frank and gallerist, historian and curator David Eichholtz.

All of the artists in “Op Infinitum” were creating perceptual art in the 60s using color, line and composition with diverse approaches, including painting, constructions, kinetics and three-dimensional objects. Various supports were used—canvas, panel, wood, acrylic—and the media was brushed, stained, sprayed, poured and glued to create artworks that were “retinal” and “perceptual”. What is important to note is that the artworks featured in “Op Infinitum” from the nine artists who were not included in the 1965 presentation at MoMA, are as equally spectacular and every bit as visually stimulating and mentally challenging as the artworks from the artists who Seitz did include in that seminal exhibition. And, these nine artists were not alone. The exploration of visual perception was extensive, occurring across the US and around the world. “Op Infinitum”, in many ways, is a continuation of “The Responsive Eye” exhibition that expands the roster and recognizes the impact of “optical” abstraction on generations of artists.

The current presentation, “Op Infinitum”, looks at the 1960s artworks—and a few from the early 70s— from 9 artists who were not included in “The Responsive Eye” exhibition in 1965, even though they were working in a similar fashion, during the same time and often colleagues of the artists who were included in that seminal presentation. Those artists include: Leon Berkowitz, Charles Hinman, Ward Jackson, Tadaaki Kuwayama, Rakuko Naito, Paul Reed, Leo Valledor, Mario Yrisarry and Larry Zox. Their artworks are presented alongside the artworks of 16 of the American artists who were featured in MoMA’s exhibition, including: Richard Anuszkiewicz, Karl Benjamin, Ernst Benkert, Francis Celentano, Thomas Downing, Lorser Feitelson, John Goodyear, Francis Hewitt, Leroy Lamis, Tony DeLap, Mon Levinson, Ed Mieczkowski, Oli Sihvonen, Julian Stanczak, Peter Stroud and Tadasky.

“Op Infinitum: ‘The Responsive Eye’ Fifty Years After”, a presentation of American Op Art in the 60s will be presented at David Richard Gallery from May 29 through July 6, 2015. An opening reception will be held Friday, May 29 from 5:00-7:00 PM. A digital catalogue will be available with an essay by Peter Frank. The gallery is located at 544 South Guadalupe Street, Santa Fe, New Mexico 87501, phone 505-983-9555 in the Santa Fe Railyard Arts District.