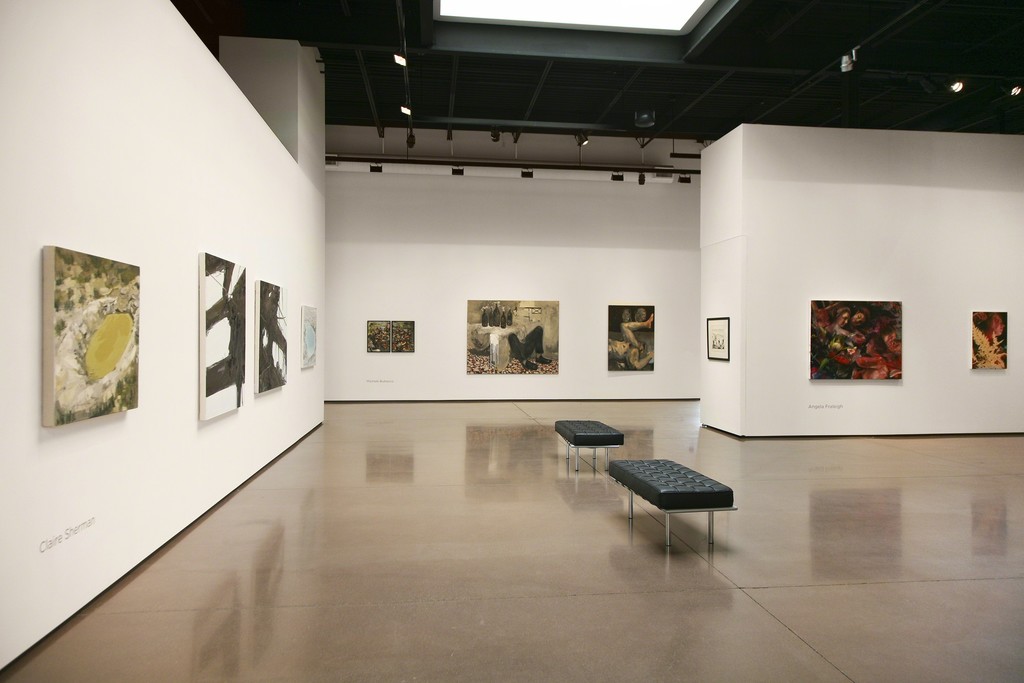 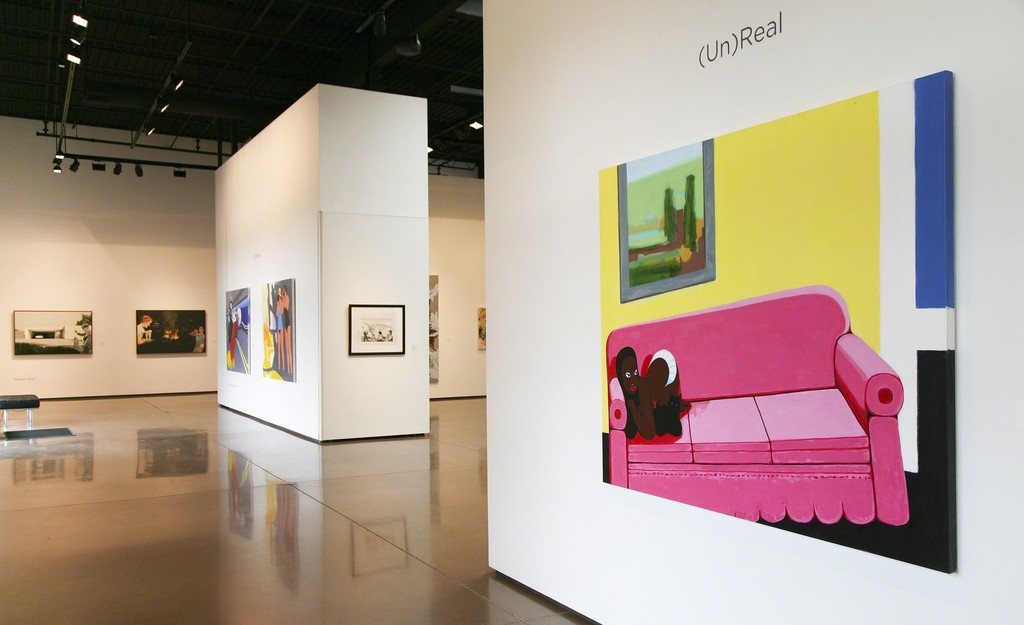 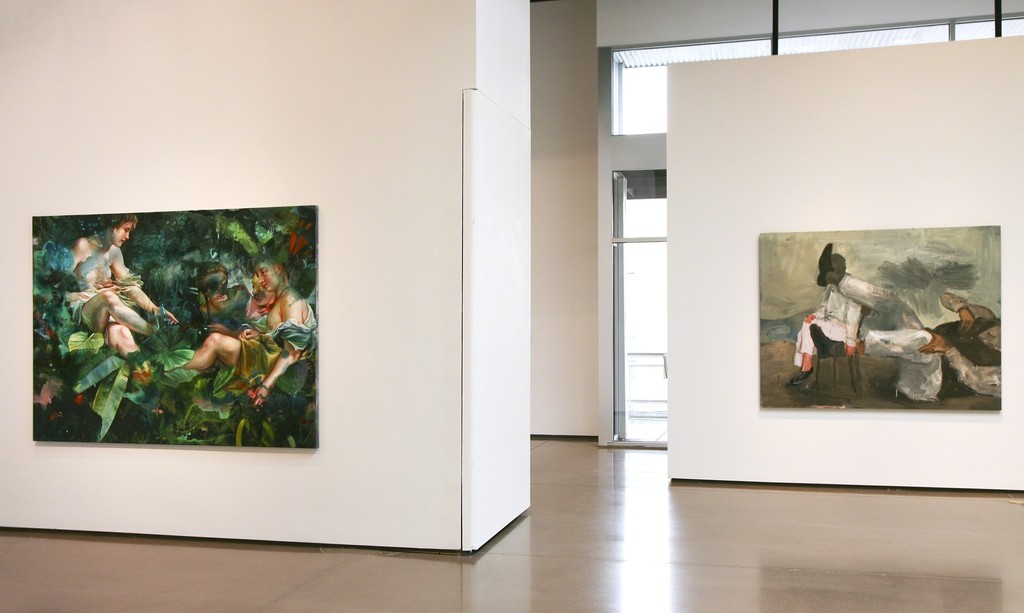 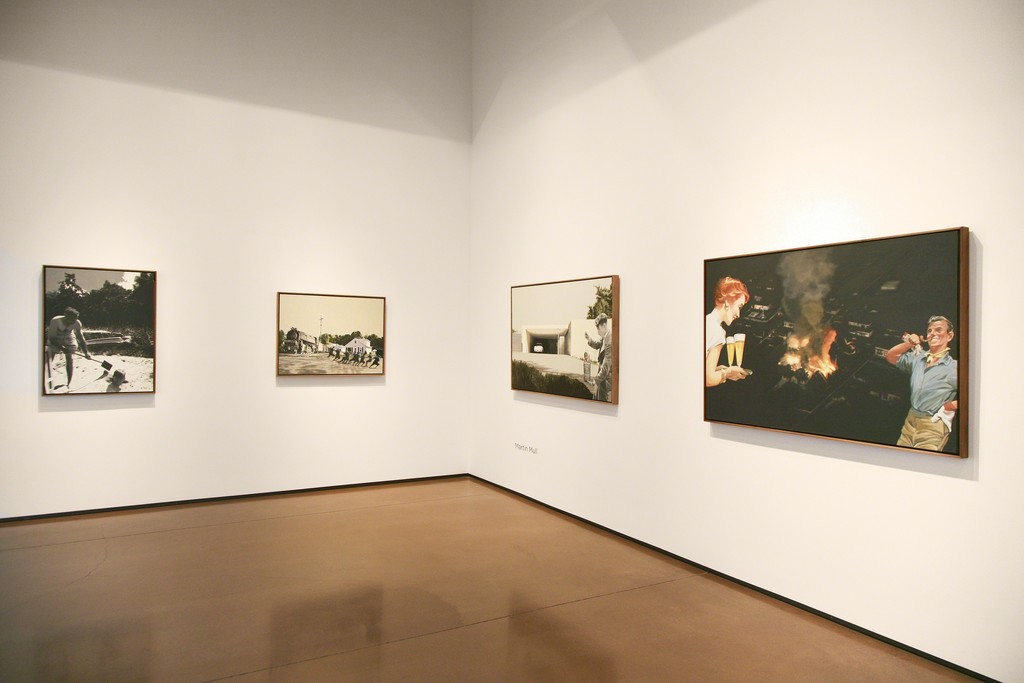 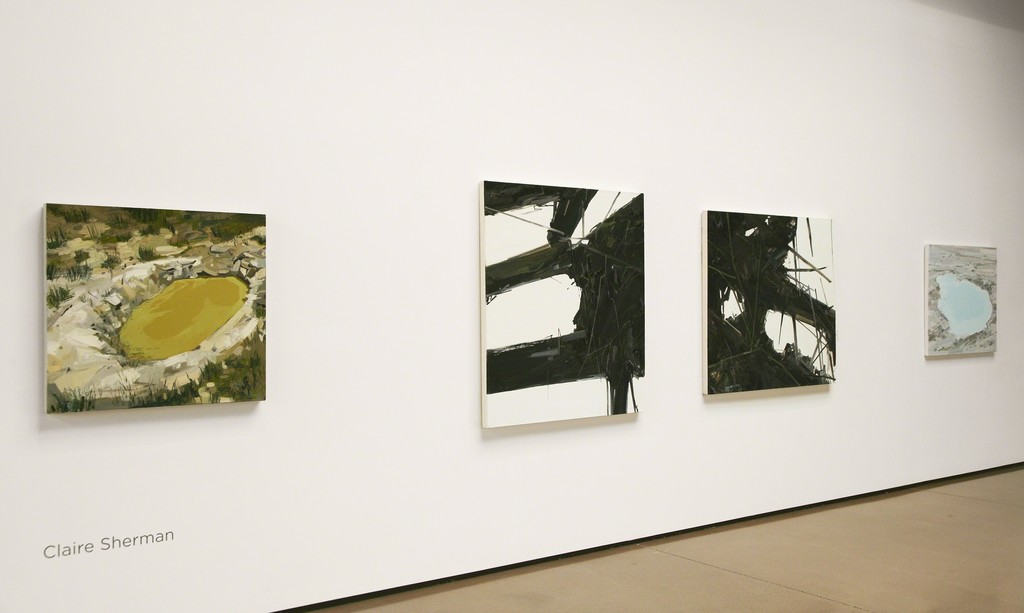 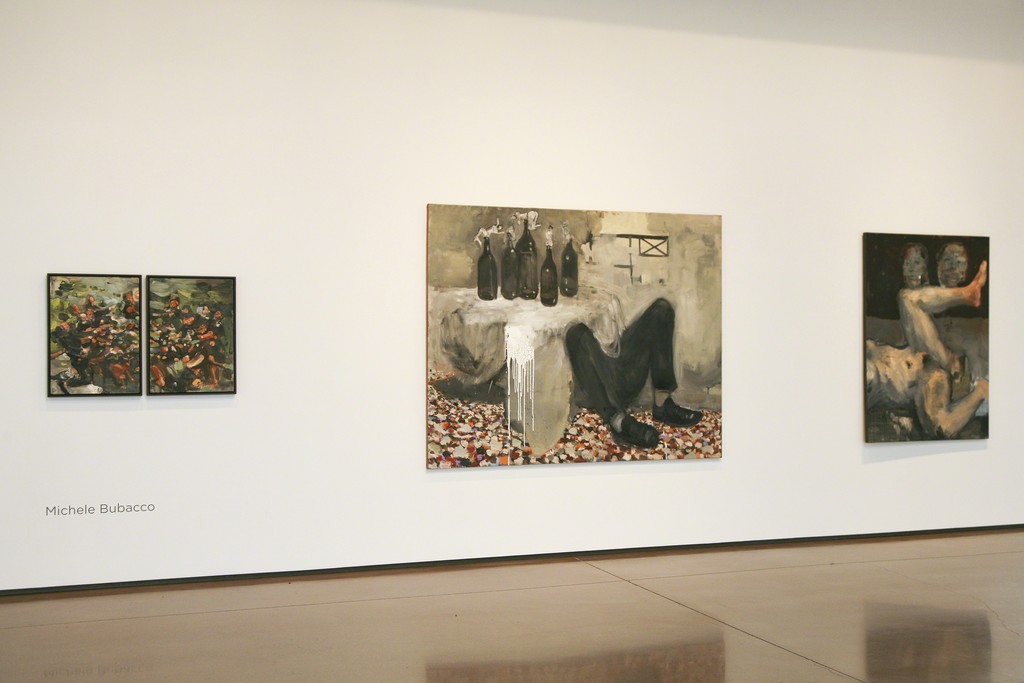 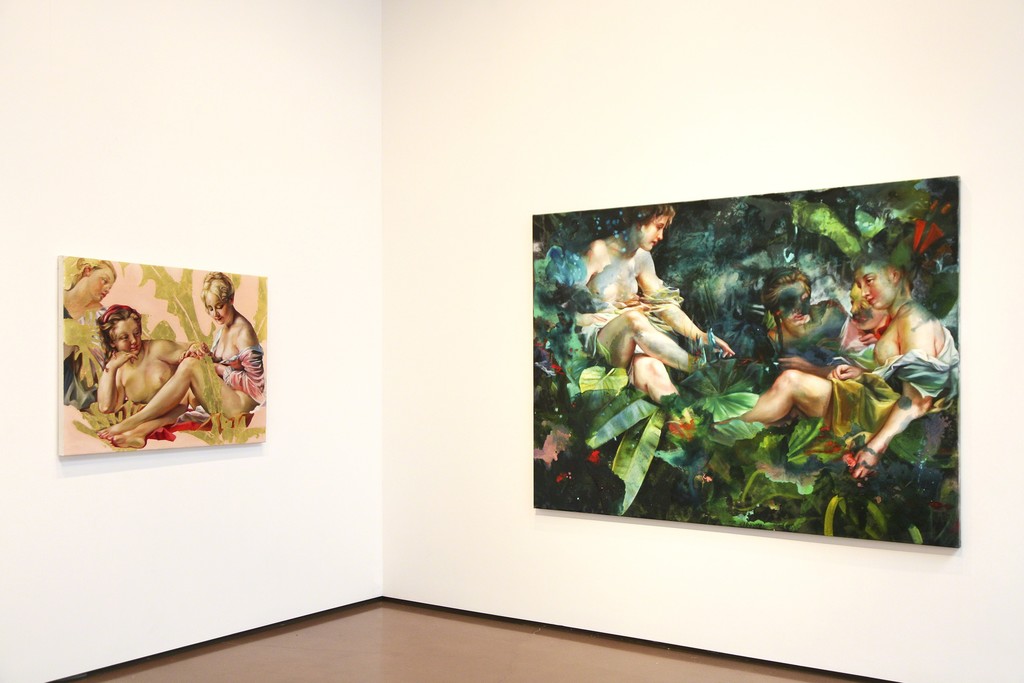 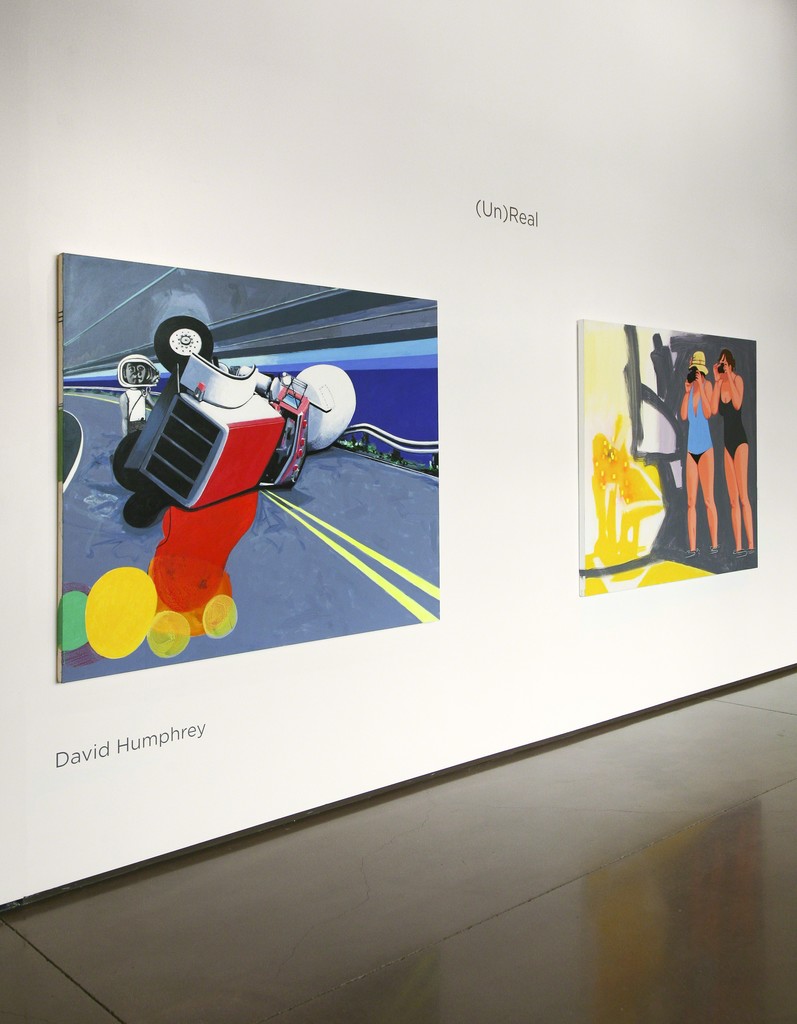 David Richard Gallery is pleased to present (Un)Real, a group exhibition featuring new figurative paintings by Michele Bubacco, Angela Fraleigh, David Humphrey, Martin Mull and Claire Sherman. This presentation, curated by Mary Dinaburg and Howard Rutkowski, will be presented July 31 - September 26, 2015. There will be an opening reception with the curators on Friday, July 31, from 5:00 to 7:00 PM and a gallery discussion on Saturday, August 1 from 2:00 to 3:00 PM. The gallery is located at 544 South Guadalupe Street, Santa Fe, New Mexico 87501, phone 505-983-9555 in the Santa Fe Railyard Arts District.

The exhibition, (Un)Real, debuts the gallery’s figuration program and introduces five new artists to the roster. These artists all start with familiar imagery or situations as a point of departure. Then, each takes it in a different direction, using their unique approaches to painting and imbuing the works with conceptual content that challenge our point of view. This presentation and the work of these artists is less about representation, but more about the history of painting and cultural and conceptual parallels with abstraction. Not only are these paintings visually aesthetic on the surface, but there is a story and history behind each, providing much more than visual depth.

Michele Bubacco has a raw, gestural approach to painting, with deliberate strokes and a reductive palette that captures the anguish and despair of the figures. The scenes are chaotic, some psychologically disturbing, with imagery that ranges from sexually ambiguous to somewhat aggressive that creates intrigue and mystery with respect to the character’s orientation and situation. Bubacco was born in 1983 on the island of Murano in Venice, Italy and currently resides in Vienna, Austria. After studying painting with the Venetian artist Alessandro Rossi from 2002 until 2004, Bubacco opened a studio in Murano and began to take part in exhibitions in Italy and throughout Europe. A major highlight was the mounting of the monumental painting “Crimson Orchestra” at a satellite exhibition of the Venice Biennale in 2011.

Angela Fraleigh’s newest work reconsiders the classic female nude by taking figures from Baroque and Rococo paintings and reexamining their surroundings, attire and gaze. Her paintings are more than sumptuous and beautiful, they also touch upon feminist concerns. By taking the figures out of their objectified and sensual roles, she reveals different possible readings and narratives for the female characters, giving them individuality and confidence. Fraleigh earned her MFA from Yale University and her BFA from Boston University. She has exhibited widely at numerous venues across the US including the Kemper Museum of Contemporary Art, Kansas City, MO, and the Museum of Fine Arts Houston, TX. Fraleigh was awarded several artist-in-residence programs, including the CORE program, MFAH, TX, the Bemis Center for Contemporary Art in Omaha, NE and Frans Masereel Centrum in Kasterlee, Belgium.

Emerging in the 1970s, David Humphrey’s paintings come out of Postmodernism. They are hard to categorize with their combination of cartoonish figures, Pop Art sensibility, Surrealism and gestural abstraction. Yet, his unique visual language brings figuration and abstraction together to challenge perceptions and assumptions. In his 35 year career, Humphrey has exhibited throughout the US, Canada and Europe. He has been a recipient of the Rome Prize, American Academy in Rome in 2008, John Simon Guggenheim Memorial Foundation Fellowship in 2002 and two National Endowment for the Arts Fellowships in 1987 and 1995. Humphrey’s artworks are included in the permanent collections of: Museum of Art, Carnegie Institute, Pittsburgh, PA; Cleveland Center for Contemporary Art, OH; Denver Art Museum, CO; Metropolitan Museum of Art, NY; Museum of Fine Art, Boston, MA; and Walker Art Center, Minneapolis, MN.

The photo real paintings of Martin Mull critique the idealized Post-War American dream of a safe and happy home life. Those who had the good fortune to realize that dream are paired in his paintings with those who did not, by using a clever device of juxtaposing the two extreme lives in full color versus half tones. Mull studied at the Rhode Island School of Design and has had numerous solo exhibitions across the US. His artworks are included in the permanent collections of Los Angeles County Museum of Art, CA; The Metropolitan Museum of Art, New York, NY; The Brooklyn Museum, New York, NY; Walker Art Center, Minneapolis, MN and The Whitney Museum of American Art, New York, NY, among others.

Claire Sherman’s paintings are rooted in the American landscape tradition. However, she does not try to capture the grandure and heroic scale of the outdoors in her artworks. Instead, she focuses on the details in the trees and rocks, transforming them into abstractions that allow the viewer to get lost in the building blocks of the landscape and open another world of possible readings. Sherman studied at the University of Pennsylvania and earned her MFA from The School of the Art Institute of Chicago in 2005. She has exhibited across the US and in Europe with 14 solo exhibitions and her work included in numerous private and corporate collections. Sherman has received many fellowships and residencies and her artwork reviewed in the New York Times, Brooklyn Rail, Hyperallergic and Chicago Tribune, among others.