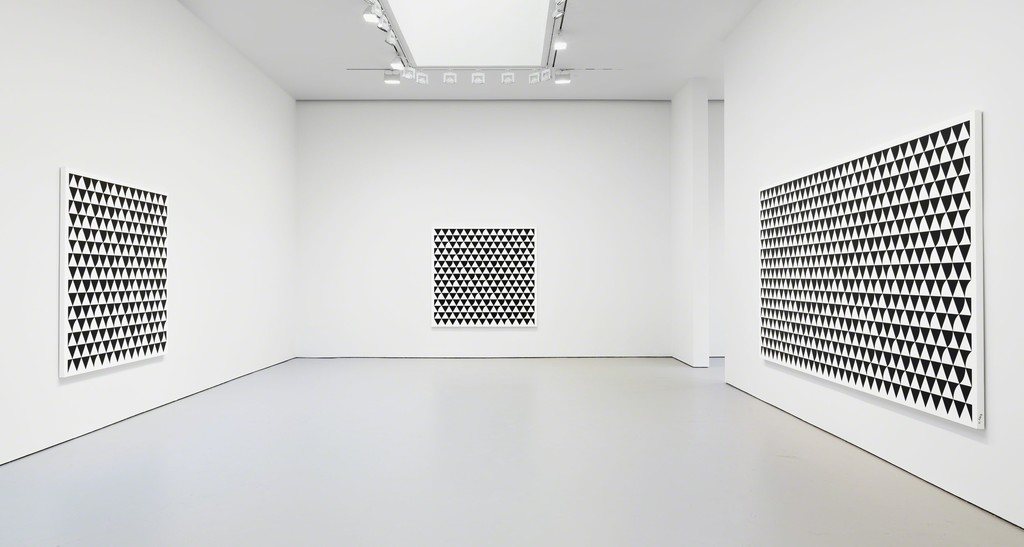 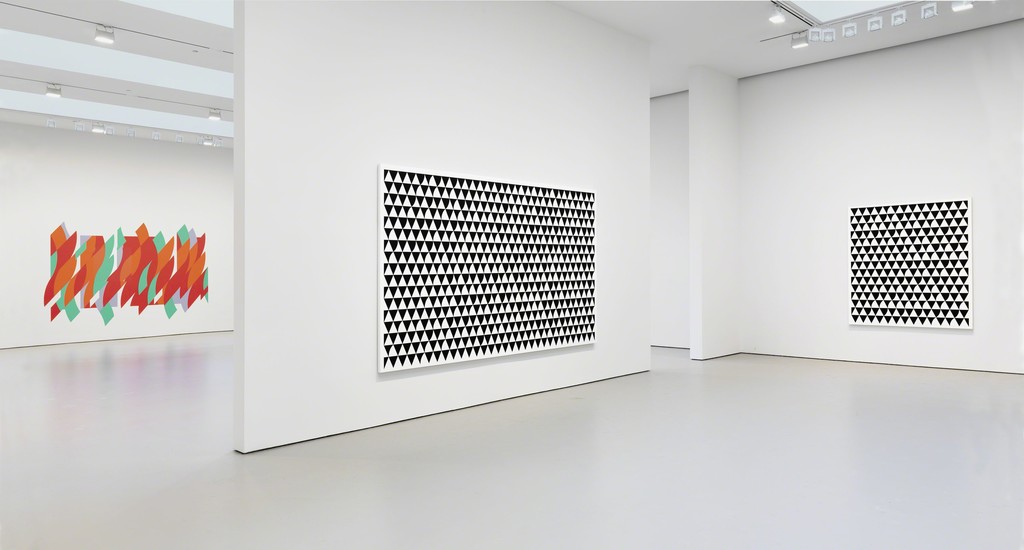 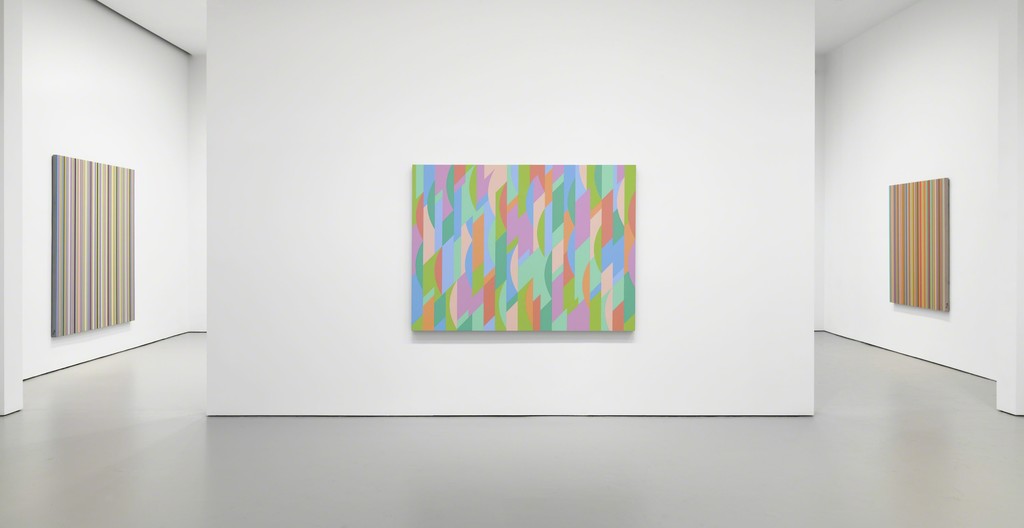 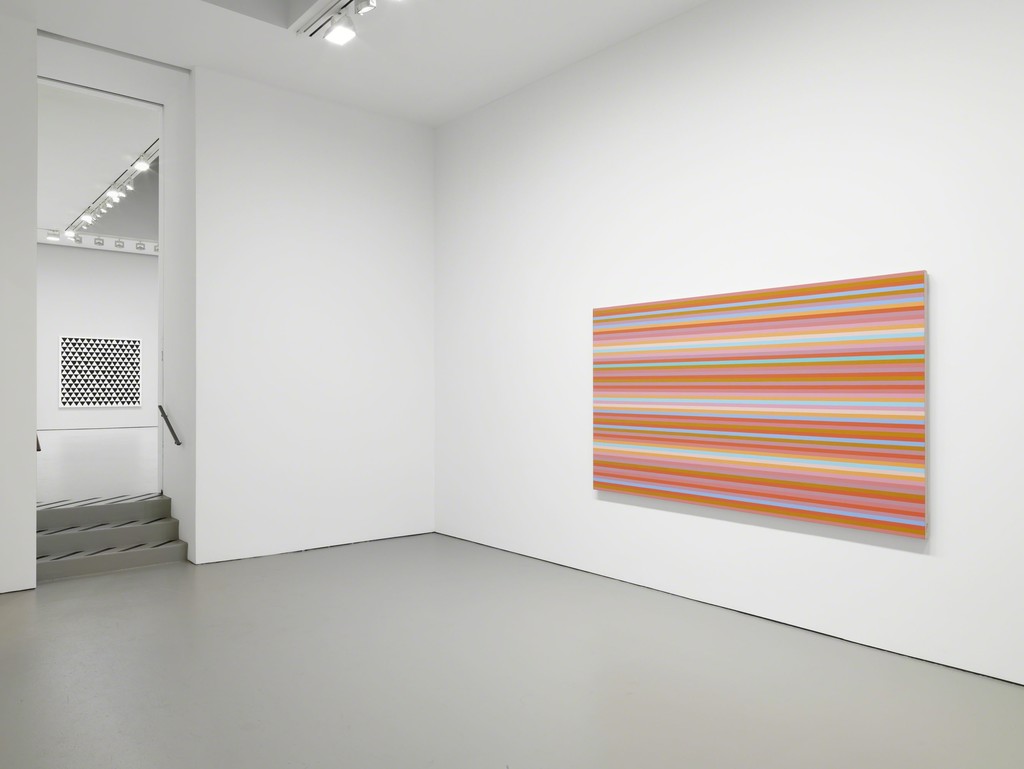 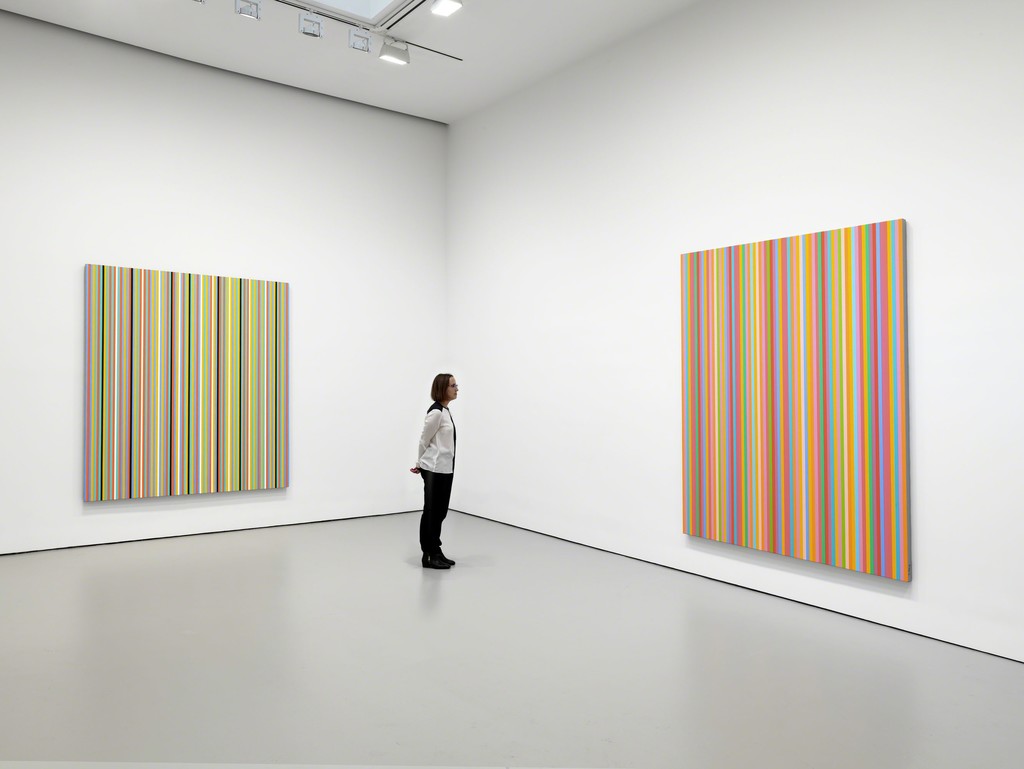 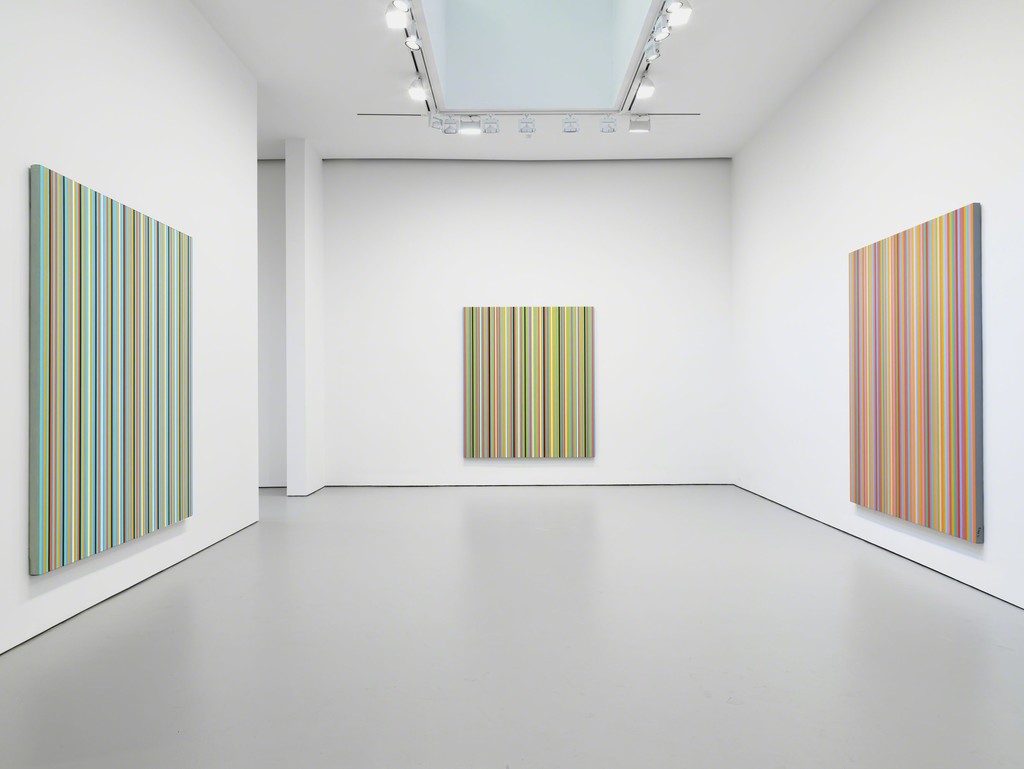 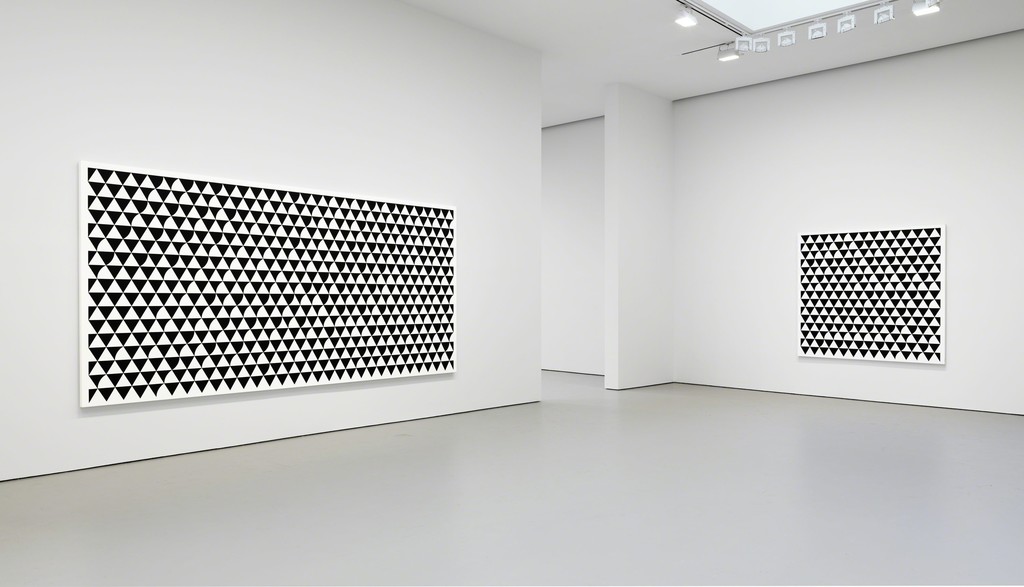 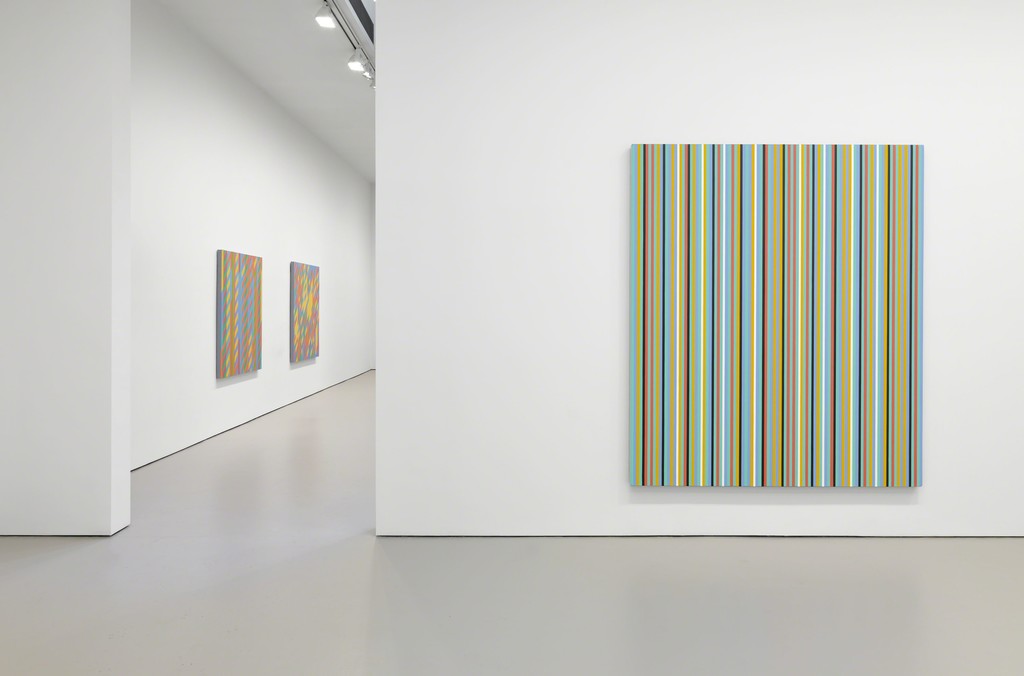 David Zwirner is pleased to present the gallery’s first exhibition with Bridget Riley in New York. On view across 525 and 533 West 19th Street, this will be her first show in the city since 2007, and the only New York presentation since Bridget Riley: Reconnaissance at the Dia Center for the Arts in 2000 to feature new and older works. The exhibition marks fifty years since Riley’s participation in The Responsive Eye at The Museum of Modern Art, the highly influential group show which led to instant, international recognition for the young British painter. Last year, David Zwirner hosted her inaugural show at the London gallery, which was a major survey of her stripe paintings from 1961 to 2014.

One of the most significant living artists, Riley’s work has radically explored the active role of perception in art, using the interrelationship between line and color to convey movement and light within the pictorial field. From the early 1960s, the artist has employed elementary shapes—such as circles, stripes, and curves—to create visual experiences that actively engage the viewer, testing the limits of each element at various stages throughout her career.

This exhibition includes paintings and works on paper spanning almost thirty-five years of Riley’s practice. It takes its chronological point of departure in vertical stripe works from the early 1980s featuring her “Egyptian palette” inspired by the artist’s trip to Egypt in late 1979, which unlike previous combinations of color was organized according to plastic (and not rational) principles. These asymmetrical compositions anticipated the ensuing diagonal grid paintings that Riley began in 1986. Featuring rhomboid shapes that break up the picture plane, these in turn became the foundation for her curved paintings in the late 1990s.

Vertical, curvilinear shapes prevailed in the past decade and also characterize her wall painting Rajasthan (2012), a composition of intersecting forms in green, gray, orange, and red whose presentation here marks its first display outside of Europe. The exhibition culminates with Riley’s most recent stripe works as well as a new series of black-and-white paintings that explore concavity and convexity of the line, all shown here for the first time. The return to painting in black and white, which she had abandoned in the mid-1960s in order to explore the properties of color, was directly inspired by Riley’s 1962 painting Tremor, and here appears in the current context of five decades of work. As the art historian Éric de Chassey notes, these new compositions “not only enter into a dialogue with the 1960s works, but take stock of every painting experience Riley has created during a long career. [She once] remarked: ‘I had to work through the black-and-white paintings before I could even begin to think about possibilities of color.’ The 2014–2015 paintings stem from the reverse: a working through the color paintings has enabled her to come to a new series of black-and-white works.”1

The exhibition will be accompanied by a fully illustrated catalogue published by David Zwirner Books featuring an essay by the art historian Richard Shiff and biographical notes compiled by Robert Kudielka, one of her foremost critics.

Currently on view at The Courtauld Gallery in London is Bridget Riley: Learning from Seurat, which highlights Riley’s profound engagement throughout her career with French Post-Impressionist painter Georges Seurat (through January 17, 2016). In 2016, the Gemeentemuseum, The Hague will host Bridget Riley – The Curve Paintings 1961–2014, a solo exhibition of over thirty paintings and studies focusing on the artist’s recurrent use of curves from the past fifty years. The show was organized by De La Warr Pavilion in Bexhill on Sea, England, where it was first presented in 2015.

Recent solo exhibitions include Bridget Riley (2014–2015), which displayed the artist’s large-scale sculpture Continuum alongside three paintings at The Art Institute of Chicago, making it her first presentation at an American museum in over a decade. Bridget Riley: Paintings and Related Work (2010–2011) was on view at the Sunley Room at the National Gallery, London and featured recent paintings by the artist alongside Old Master and Impressionist works. Also in London in 2010, the National Portrait Gallery presented Bridget Riley: From Life, an exhibition of Riley’s little-known sketches drawn from life. Other recent international museum shows include Bridget Riley: Flashback, which first went on view at the Walker Art Gallery in Liverpool in 2009; Bridget Riley: Rétrospective at the Musée d’Art Moderne de la Ville de Paris in Paris in 2008; Bridget Riley: Paintings and Drawings 1961–2004 at the Museum of Contemporary Art, Sydney in 2004–2005; Bridget Riley: New Work at the Museum Haus Esters and Kaiser Wilhelm Museum, Krefeld, Germany in 2002; and Bridget Riley: Reconnaissance at the Dia Center for the Arts, New York from 2000–2001.

Riley’s visual vocabulary is complemented by her numerous books and essays in which she explores concepts pertaining to her own practice as well as the works of several other artists. Riley has also co-curated exhibitions on Paul Klee (Hayward Gallery, 2002) and Piet Mondrian (Tate Gallery, 1996).

In 1968, Riley won the International Prize for Painting at the Venice Biennale. In 1974, she was made a CBE (Commander of the Most Excellent Order of the British Empire) and in 1999, appointed the Companion of Honour. In 2003, the artist was awarded the Praemium Imperiale in Tokyo. She received the Kaiser Ring of the City of Goslar, Germany in 2009 and the Rubens Prize of the City of Siegen, Germany in 2012.