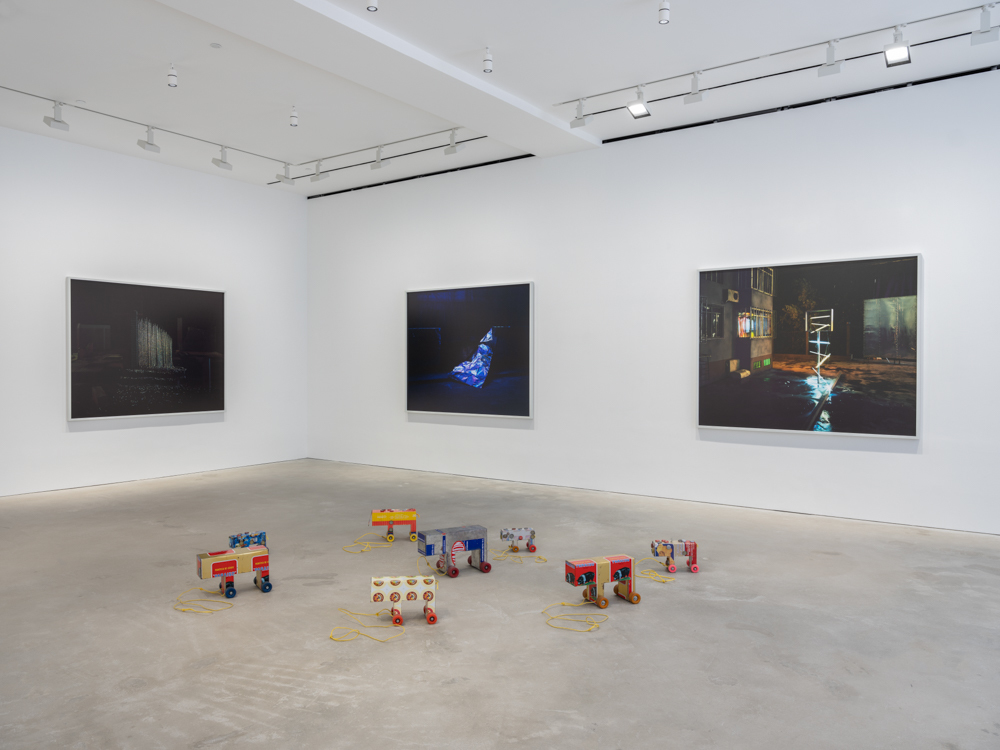 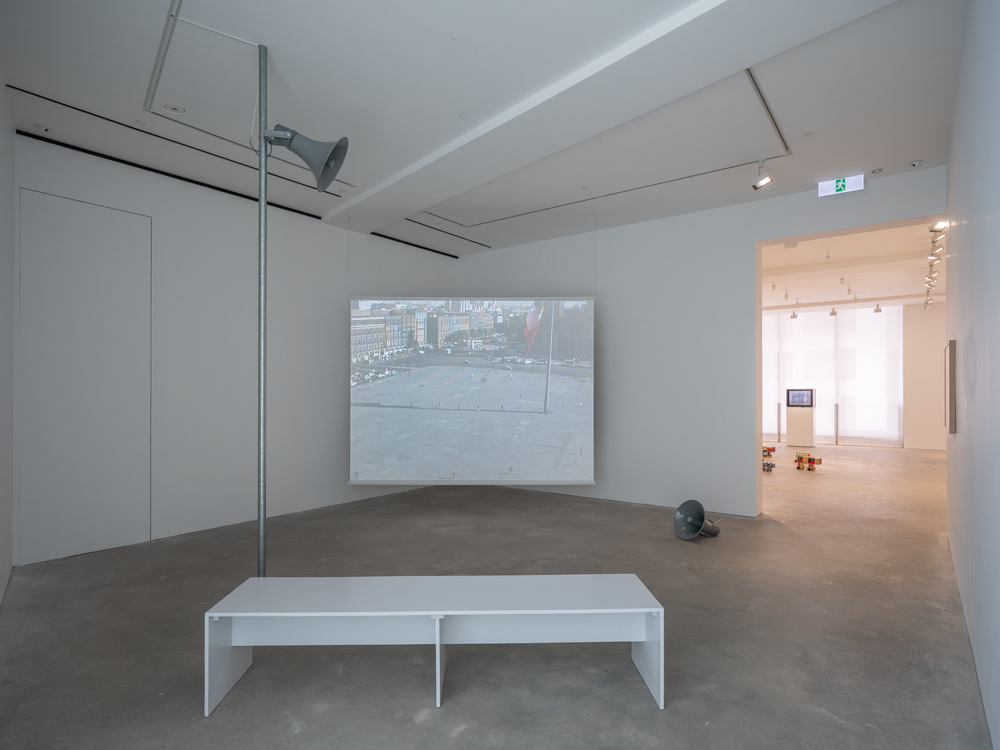 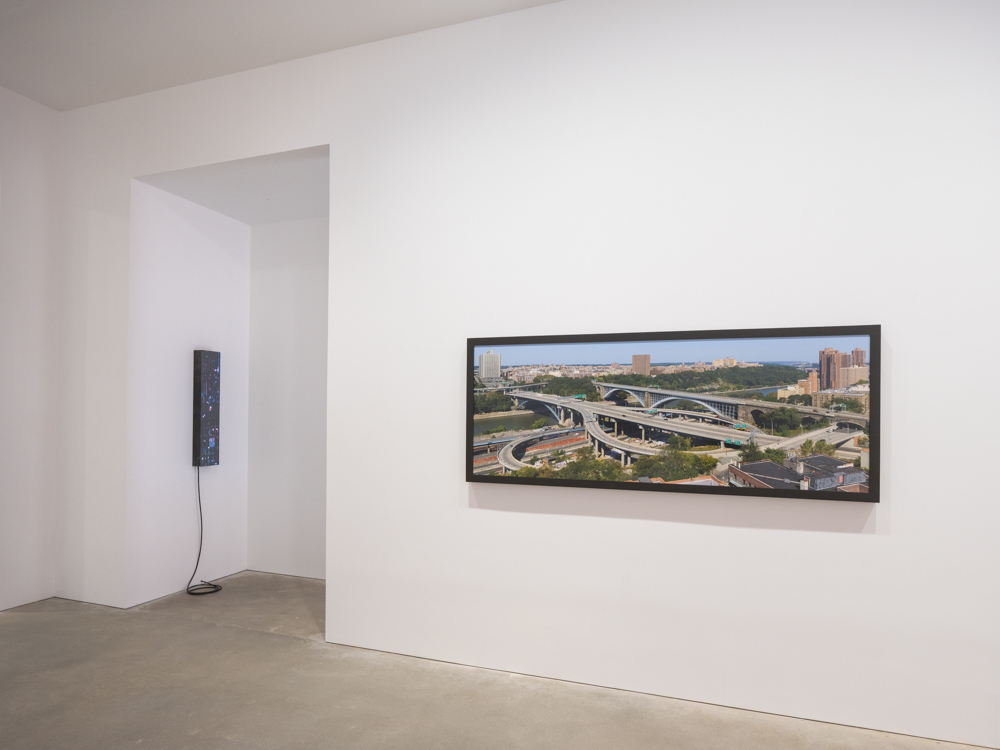 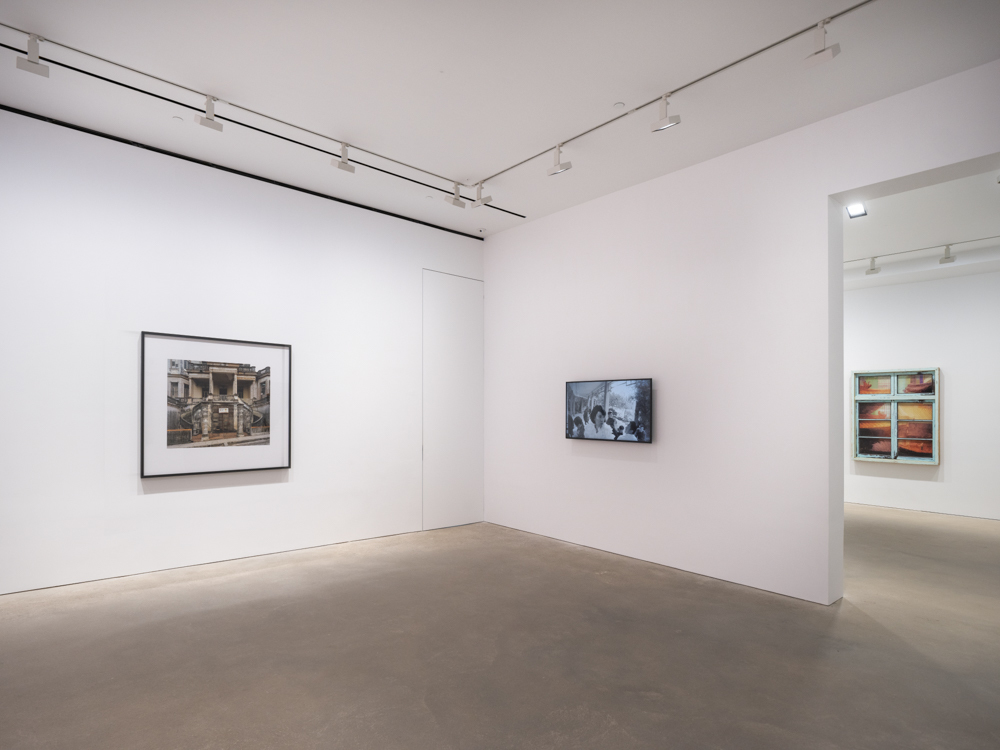 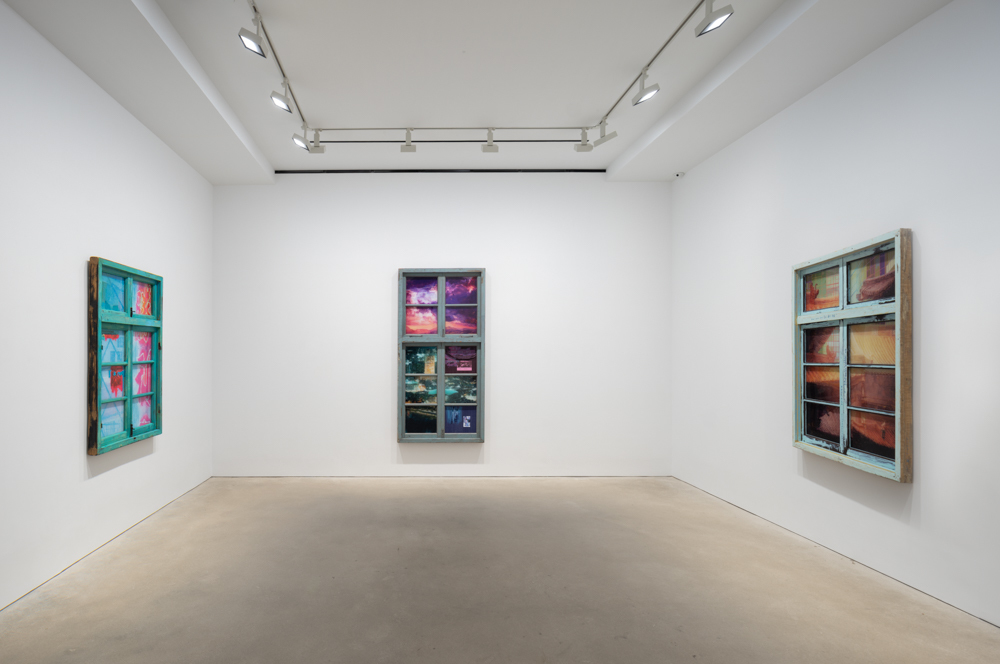 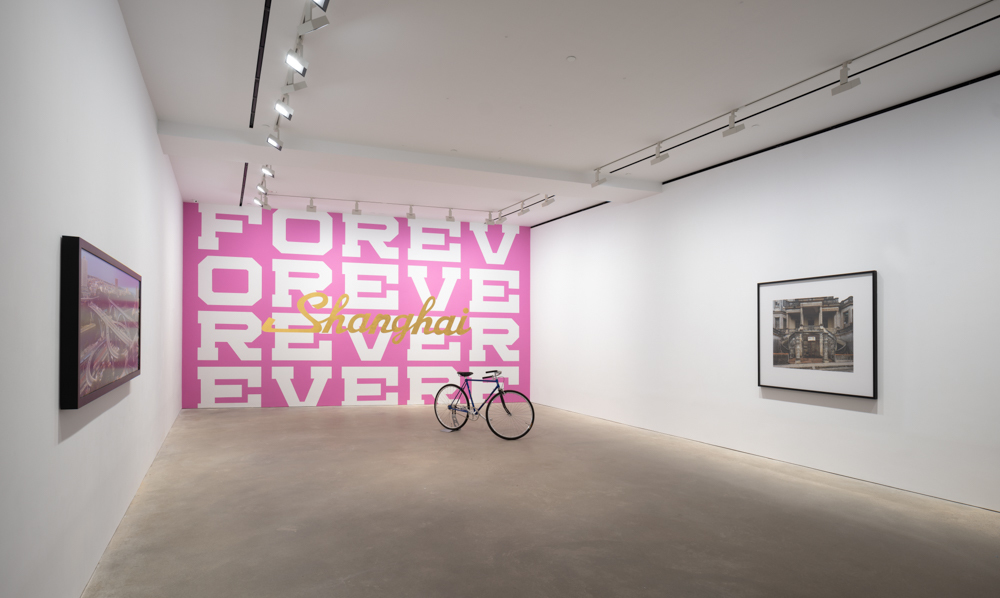 David Zwirner is pleased to present Brilliant City, a group exhibition organized by Leo Xu at the gallery’s Hong Kong location featuring work by Francis Alÿs, Chen Wei, Stan Douglas, Li Qing, Michael Lin, Gordon Matta-Clark, and Ming Wong. The exhibition borrows its title from the lyrics of the 1987 Cantopop classic song “Starry Night,” in which the Hong Kong–based electro duo Tat Ming Pair illustrate the perplexing brilliance of the city’s landscape at night, and the feeling of loss and doubt that it harbors amongst its youth. Drawing inspiration from Hong Kong, an archetypal dystopian metropolis characterized by its unparalleled density and lofty high rises, this exhibition explores how artists across generations and locations have engaged with the complexity of urban space.

The exhibition opens with a group of new window paintings from Hangzhou- and Shanghai-based artist Li Qing’s (b. 1981, Huzhou, China) Neighbor’s Window series. Begun in 2011, these works combine timeworn household window frames sourced from demolished neighborhoods with painted imagery informed by the artist’s research on the rapid succession of gentrification in the post-colonial era of major cities including Hong Kong and Shanghai. By painting directly onto the back of the window glass panes, the artist juxtaposes two unlikely neighbors to suggest disparate economies and identities, thereby highlighting real truths and contradictions.

Tokyo-born, Taipei-based artist Michael Lin (b. 1964) spent the last ten years in Shanghai investigating the city’s new forms of commerce and urban mobility that have arisen due to new technological devices and programs. Forever Shanghai (2018), a wall painting commissioned specifically for the show, appropriates the Forever (Yongjiu) bicycle logo whose letters—rendered in a midcentury Shanghai typeface—are repeated in a grid across one of the gallery’s walls. Founded in 1940, Forever (Yongjiu) is China’s oldest bicycle manufacturer, viewed as a nostalgic object synonymous with the bikes themselves. Observing the resurgence of bicycling in recent years, Lin’s work, belonging to a series begun in 2016, reflects on this phenomenon, while at the same time anticipating emerging sharing economies, such as the bike sharing program, which has become prevalent in the city. One artist-assembled "Forever" bicycle, named after a street in Shanghai, accompanies this work.

In his 2017 Blackout series, Stan Douglas (b. 1960), born and based in Vancouver, has scripted and staged scenes from a hypothetical present-day emergency scenario of the total loss of power in New York City. Set in contemporary times, and Douglas’s second work to be shot in New York, these imagined vignettes are meticulously planned, seamlessly interweaving fact and fiction in their evocation of past events that affected the city, such as the 1977 blackout or, more recently, Hurricane Sandy.

Crafted in a similar filmic fashion, Beijing-based artist Chen Wei’s (b. 1980, Wenzhou, China) photographs contain dramatically lit scenes that the artist constructs in miniature in his studio. Reimagined from aspects of his life in Beijing and evoking cyberpunk literature, Chen’s images depict urban absurdities, including vacated interiors and streetscapes devoid of people. The resulting photographs are uncanny and surreal portraits of urban life that point to Beijing’s complex relationship to its rapid urbanization.

The black-and-white short film Next Year/L’Année Prochaine/明年 (2016) by Berlin-based Singaporean artist Ming Wong (b. 1971) reinterprets Alain Resnais’s 1961 film, Last Year at Marienbad. Wong plays both the male and female leads in his reinterpretation of this classic encounter between a man and a woman who may or may not have met before. Filmed across multiple venues in Shanghai’s old French Concession—including Marienbad Café and Fuxing Park, which was based on the nineteenth-century design of the Parc de la Tête d’Or in Lyon, France—Wong’s opaque treatment of time and space creates a feeling of déjà vu, transporting the audience between the past, present, and future. Further combining his scenes with those from the original, Next Year/L’Année Prochaine/明年 is located neither in Paris nor Shanghai, but instead exists within the folds of an ambiguous spatiotemporal dimension.

The exhibition also features Zócalo, May 22, 1999 (1999) by the Belgian-born, Mexico City–based artist Francis Alÿs (b. 1959, Antwerp). Set on the eastern side of the Plaza de la Constitución (Zócalo) in Mexico City, the film begins at dawn with the flag-raising ceremony and ends at dusk with the flag’s descent. The camera follows the progression of the flagpole’s shadow as it changes throughout the day, describing the lateral movement of three degrees per hour, for a total of thirty-six degrees. Aside from capturing the astronomical phenomenon of the flagpole-cum-sundial, the work documents its social function: to escape the sweltering sun, local people line up along the sliver of shade, chasing it throughout the day.

Also on view is American artist Gordon Matta-Clark’s (1943–1978) Conical Intersect (1975), an antimonument, or “nonument,” created for the Paris Biennale in 1975. This film documents the artist’s ambitious action of cutting through two adjacent seventeenth-century properties awaiting demolition next to the site for the Centre Georges Pompidou, a new cultural center that was then under construction. The film is accompanied by a group of photos from Office Baroque (all from 1977), another one of the artist’s iconic "cut" pieces, which was executed one year before his untimely death in 1978, at the age of thirty-five. In this project, the artist laboriously sawed tear-shaped holes into floors of a nondescript office building in Antwerp. Both these photographs, and Conical Intersect, are exemplary of the artist’s radical modes of physically exploring and subverting urban architecture.