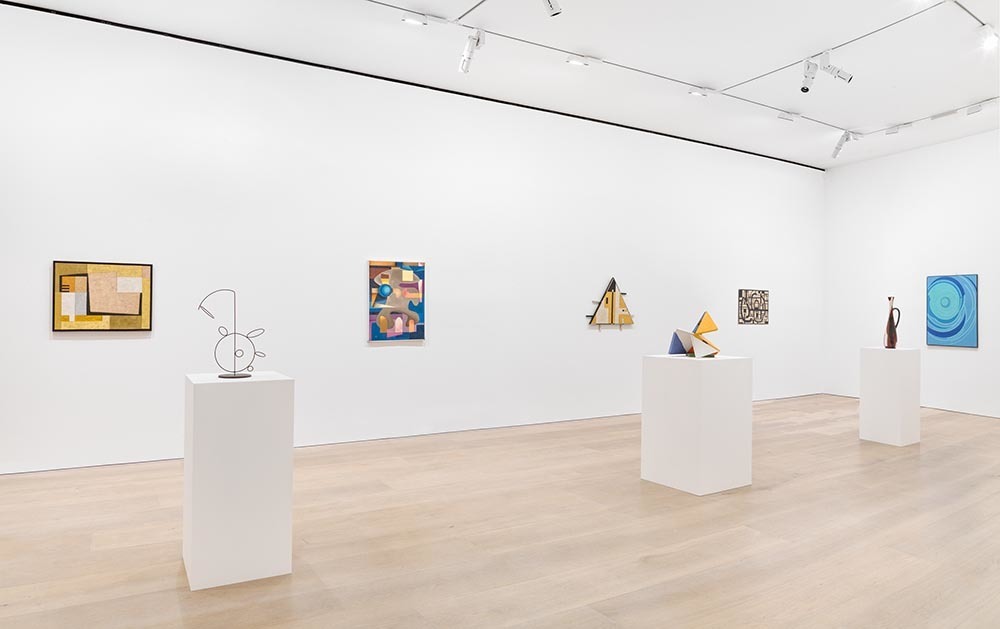 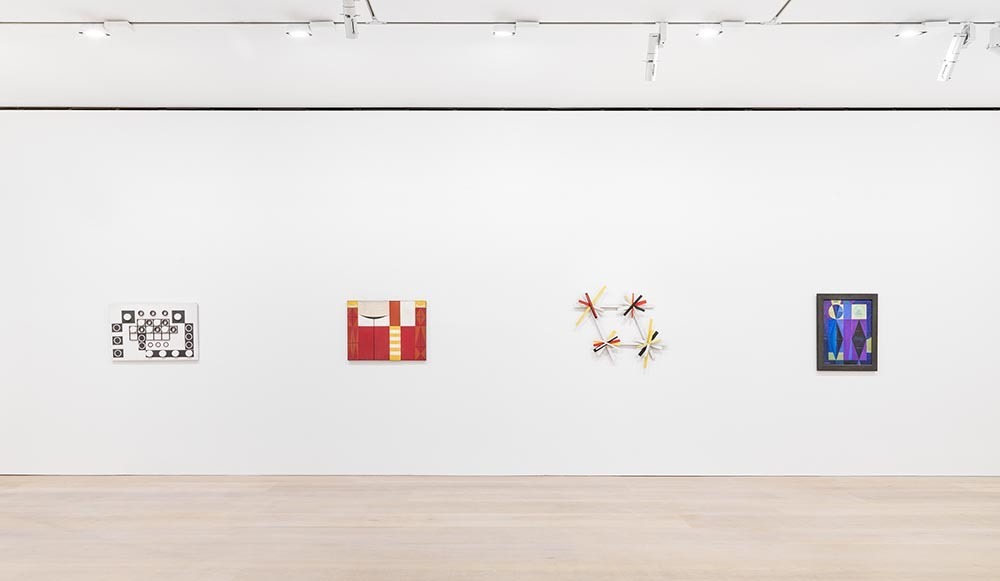 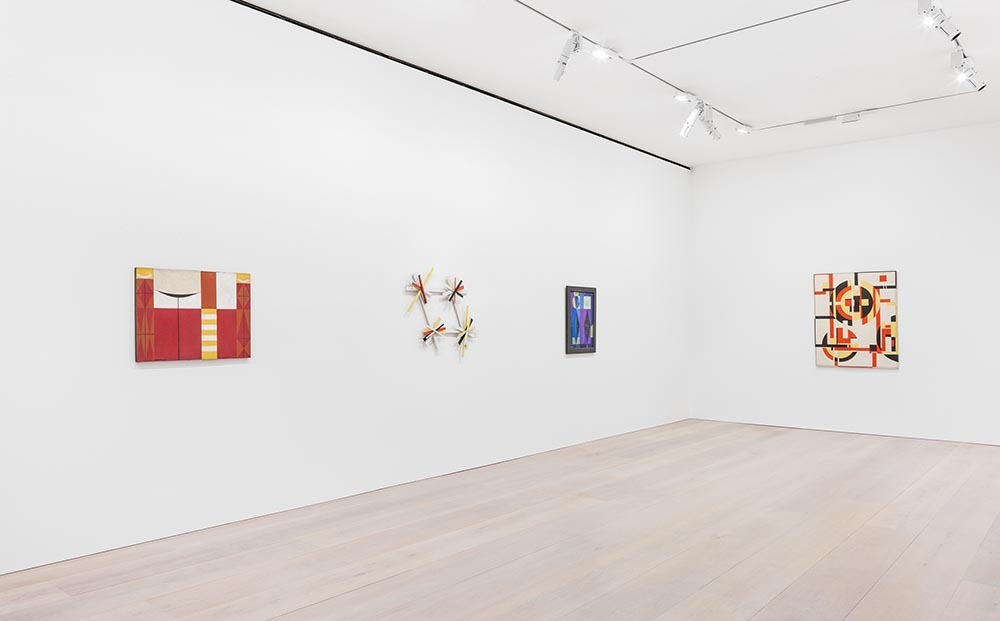 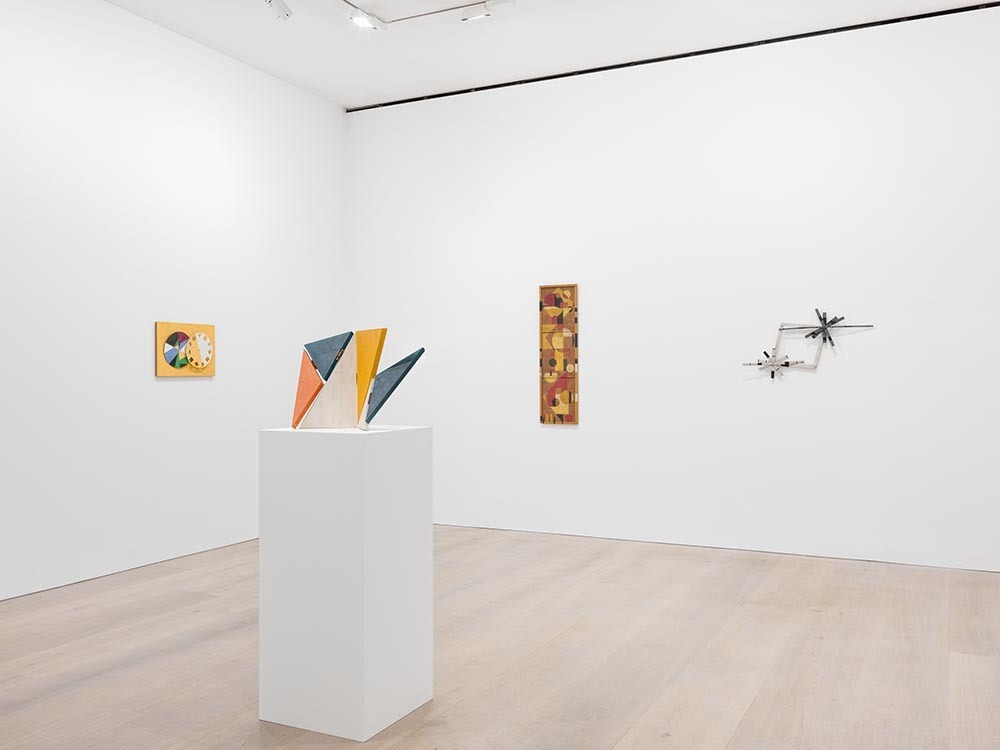 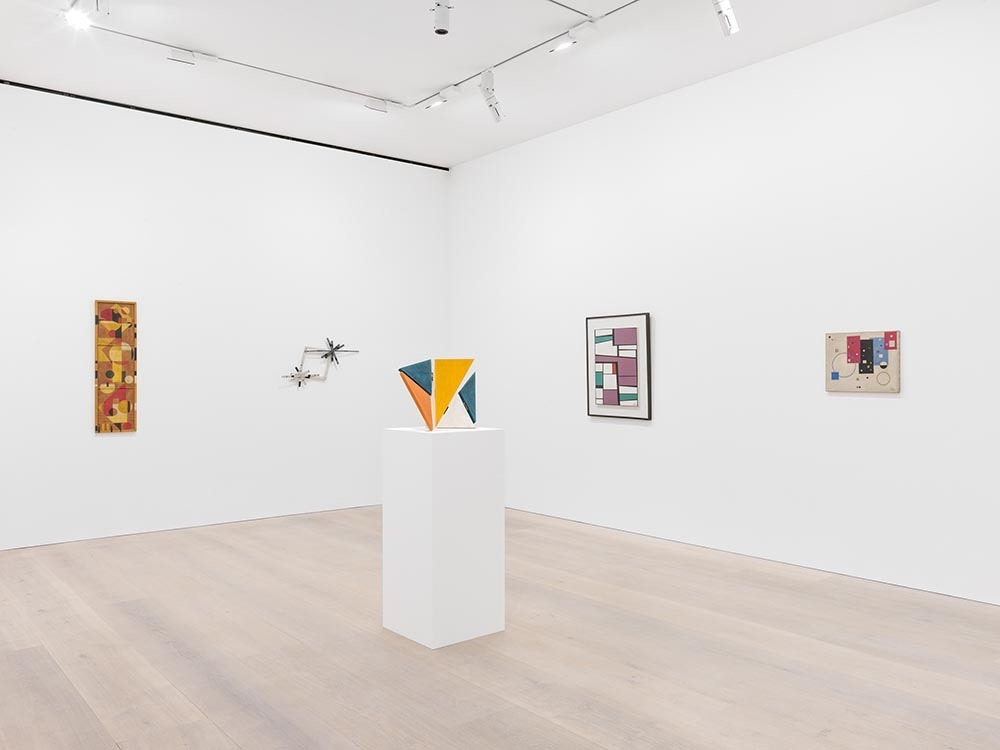 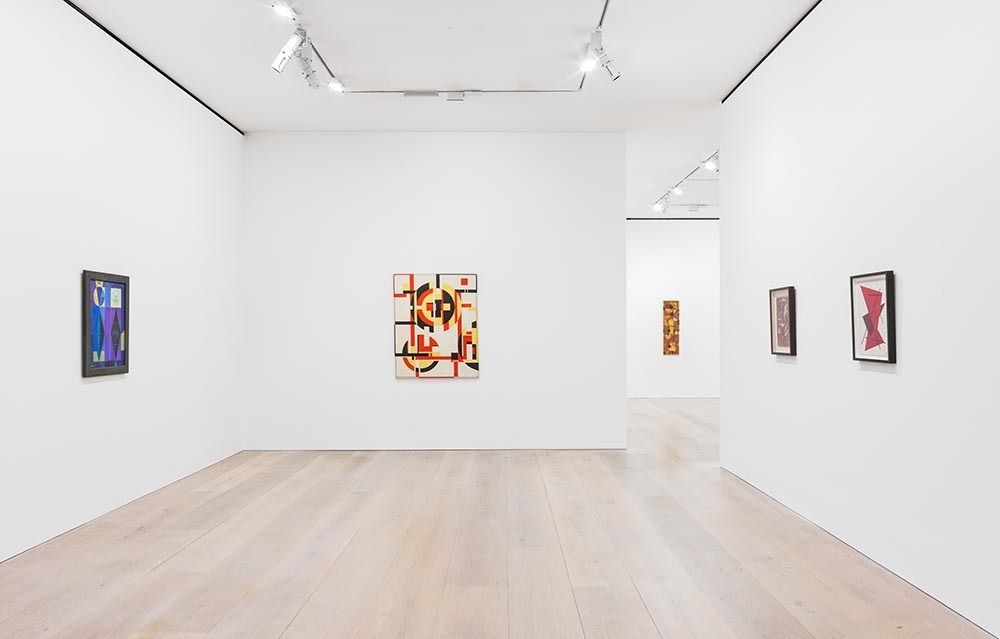 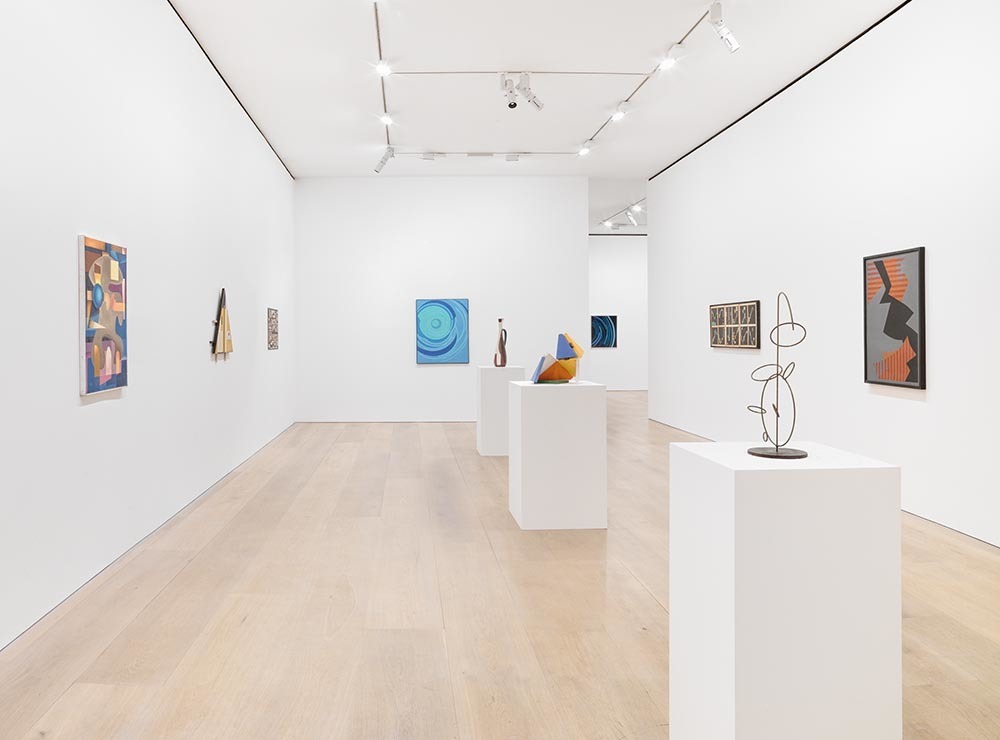 David Zwirner is pleased to present a comprehensive exhibition of paintings and sculptures by the Cuban group of abstract painters Los Diez Pintores Concretos (Ten Concrete Painters), which was active from 1959 to 1961, at the gallery’s London location. Concrete Cuba is the first presentation in the United Kingdom to highlight the origins of concretism in Cuba during the 1950s, and will include important works by the eleven artists who were at different times associated with the short-lived group: Pedro Álvarez, Wifredo Arcay, Mario Carreño, Salvador Corratgé, Sandú Darié, Luis Martínez Pedro, Alberto Menocal, José Mijares, Pedro de Oraá, José Ángel Rosabal, Loló Soldevilla, and Rafael Soriano.

The development of Cuban geometric abstraction and, specifically, the formation of Los Diez, coincided with the radical political and cultural shifts that raged throughout the country in the 1950s. The decade was marked by widespread turmoil and corruption following the 1952 military coup led by Fulgencio Batista. Culturally, Cuba experienced rising nationalist sentiments instigated in part by the influx of U.S. tourism and material goods. At the same time, Havana was undergoing rapid urbanisation and quickly becoming an international city. Against this vibrant backdrop, artists sought a new visual language in which art, specifically abstract art, could function as political and social practice.

Los Diez formalised as a group in 1959 with their inaugural exhibition titled 10 pintores concretos exponen pinturas y dibujos (10 Concrete Painters Exhibit Paintings and Drawings) organised on the occasion of the second anniversary of the Galería de Arte Color-Luz, an artist-run space co-founded by Loló Soldevilla and her partner Pedro de Oraá in 1957 to foster abstract art in Havana. Many of the group’s members had travelled widely in the preceding years and corresponded with those at the forefront of European and South American abstract movements. In particular, Wifredo Arcay, Mario Carreño, Pedro de Oraá, and Loló Soldevilla spent significant time abroad, where they were exposed to the philosophies and aesthetics of Neo-Plasticism, Constructivism, Suprematism, and post-Cubism, and in 1949, Sandú Darié began a fruitful correspondence with Gyula Kosice, the leader of the Argentinian concrete movement Madí.

The hard-edged, geometric abstract works executed by Los Diez were decidedly more cerebral than the overtly political aesthetic tactics deployed by preceding abstract expressionist painters in Havana during this decade. Los Diez sought a universal, utopian aesthetic that, in its purported political circumspection, offered a new form of political and social engagement. Though they employed a purely non-representational idiom, they did not consider their work to follow the dictates of abstract art, which they presumed to derive from forms found in nature. Rather, their non-referential compositions were based exclusively in intellectually formulated constructs using plastic elements, which they reduced to simple planes and colours. As Darié declared at the time, “This is concrete painting because each painting is a new reality.”1 Los Diez moved abstraction from purely visual, formal concerns toward conceptual and phenomenological ends, in line with other contemporaneous international art movements, to engage both the viewer and the broader collective conscience of Cuba.

On view will be several works by Wifredo Arcay (1925–1997) who, working as a printmaker in the Parisian suburb Meudon in the early 1950s, befriended such artists as Theo van Doesburg, Fernand Léger, Sonia Delaunay, Robert Delaunay, and Jacques Villon. In 1953, he joined the Parisian constructivist group Groupe Espace, which encouraged a synthetic relationship between art and architecture, leading Arcay to abandon easel painting for mural painting a few years later. Arcay’s hard-edged works in this exhibition reveal the artist’s ongoing interest in spatiality and Neo-Plastic theories of universalism and utopianism.

In an effort to both create a new reality, but also transform the existing world, Sandú Darié (1908–1991) created an experimental and experiential series of kinetic sculptures he called “estructuras transformables”, or “transformable structures”, several of which will be on display. Another highlight is the triangular Estructura (Structure), 1958, an example of Darié’s “estructuras pictóricas” (“pictorial structures”), wherein he explored notions of the frame and its relation to space and time.

Luis Martínez Pedro (1910–1989) worked primarily as a commercial artist throughout his artistic career, which undoubtedly informed his vibrantly graphic compositions. From 1963 to 1973, Martínez Pedro worked on his most iconic series “Aguas territoriales” (“Territorial Waters”), in which circular and semi-circular lines, most often gradients of blue or mauve, swirl like a whirlpool around a central core and float across a monochromatic plane.

Perhaps most known for founding the Galería de Arte Color-Luz, Loló Soldevilla (1901–1971) produced only a small but considered body of work, spanning kinetic sculpture, hard-edge painting, and geometric collages that reveal her sustained and thoughtful engagement with historical and contemporaneous abstract tendencies. Her formal experimentations, as in the three-dimensional, finely wrought Stabile, 1954, and the colourful, geometric collage Repercusión por el Color (Reverberation in Colour), 1957, demonstrate her concerted effort to achieve purity, harmony, and universalism.

Also represented here is work by Rafael Soriano (1920–2015), whose style is generally characterised by a dynamic interplay between planes of colour and flat, angular, geometric forms. This formal tension between colour and form results in an ambiguous field of spatial depth and illusion, as seen in Sin Título (Untitled), 1955. It is in these intuitive, rather than intellectualised, works that Soriano sought to convey “the truth of our interior world, the reality of our psychic world.”2

Mario Carreño (1913–2000) produced his finest work in the 1950s, after renouncing the romanticism of his earlier figurative work. Crepúsculo (Twilight), 1955, with its extremely shallow pictorial space and totemic, geometric symbols, is typical of his paintings from this period. Disillusioned with Batista’s leadership, Carreño left Cuba before the 1959 Los Diez exhibition at the Galería de Arte Color-Luz. Though his absence precluded his inclusion in the landmark exhibition, Carreño is often appended to the Los Diez group given his significant contribution as a Cuban concrete artist during the decade. Los Diez enjoyed a relatively easy relationship with the Batista regime, despite the artists’ opposition to his dictatorship, owing in part to their seemingly apolitical aesthetics and actions, and to Mario Carreño, who as the Artistic Director of the National Institute of Culture, installed the state galleries in the Palacio de Bellas Artes with abstract art, thereby negating any possible political threat. Abstraction, however, became suspect during the 1959 Revolution, led by Fidel Castro, for its earlier radical associations and utopian ideals. Consequently, many abstract and concrete artists began to flee the country.

The final Los Diez exhibition was presented at the Galería de Artes Plásticas, Camagüey in 1961. The gallery closed soon thereafter under increased political pressure and, with the exodus of artists and the closure of their main exhibition space, Los Diez disbanded. In all, the group showed together a total of three times and published two portfolios of prints. Despite its brief existence, Los Diez had a profound impact, not only on the history of Cuban art, but on the trajectory of twentieth-century abstraction internationally.

With special thanks to Antonio de la Guardia and Francisco Arevalo.