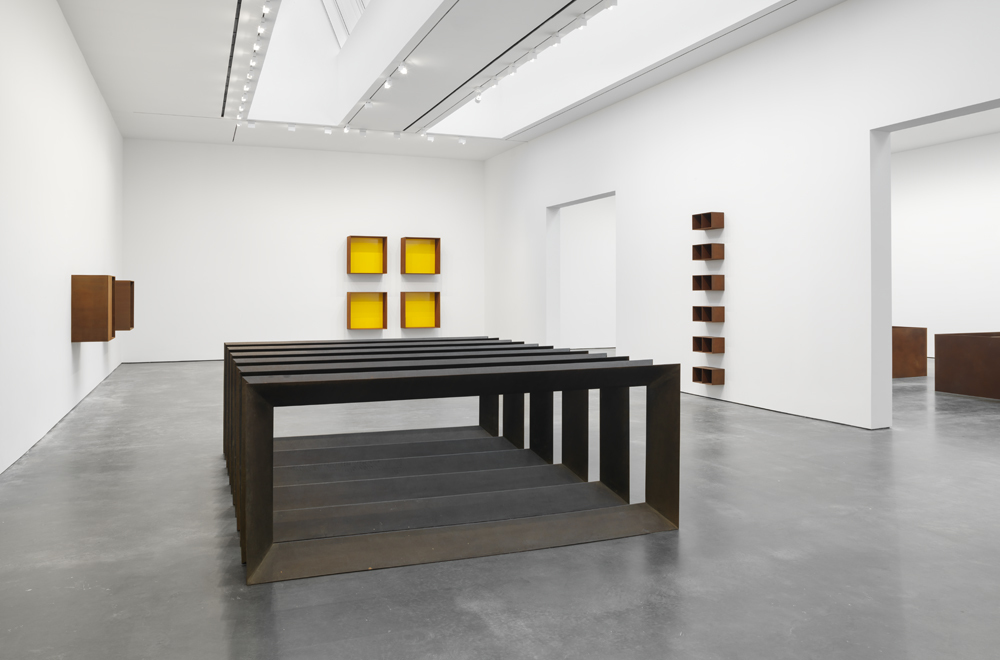 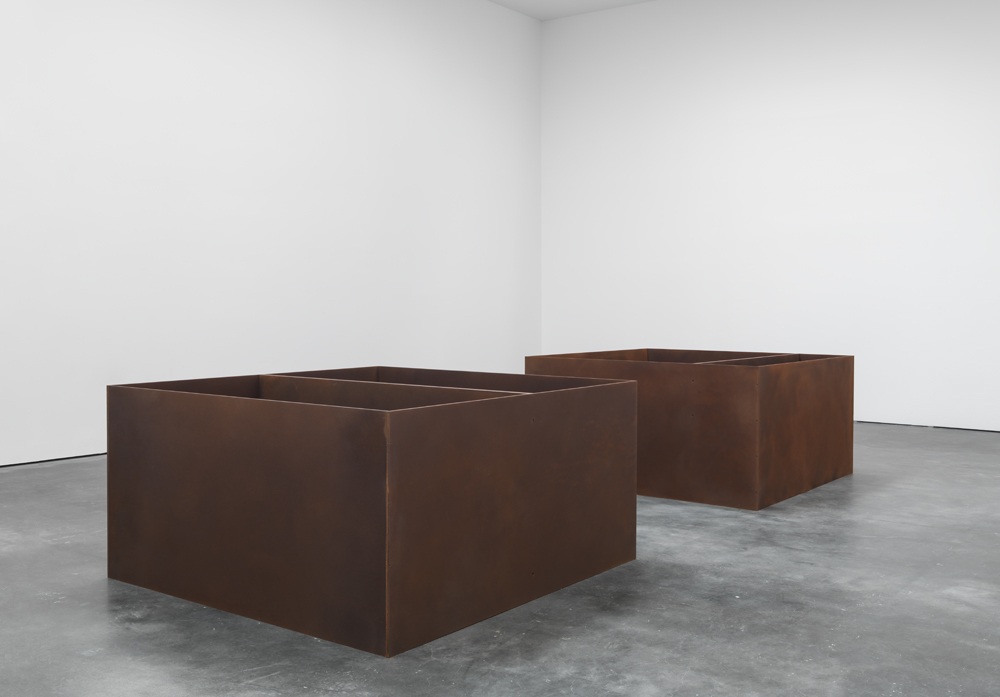 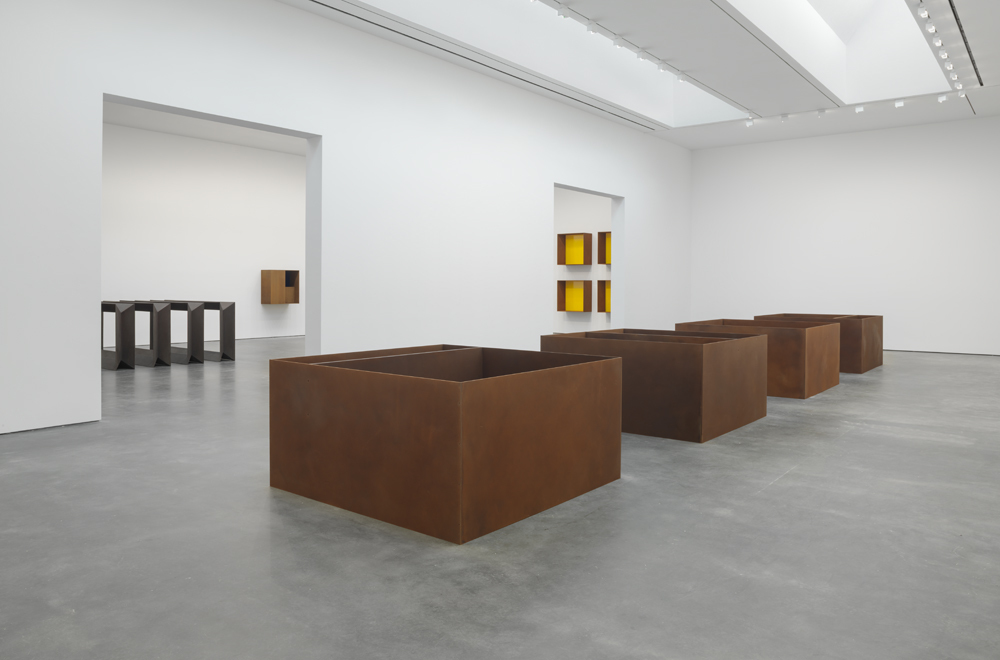 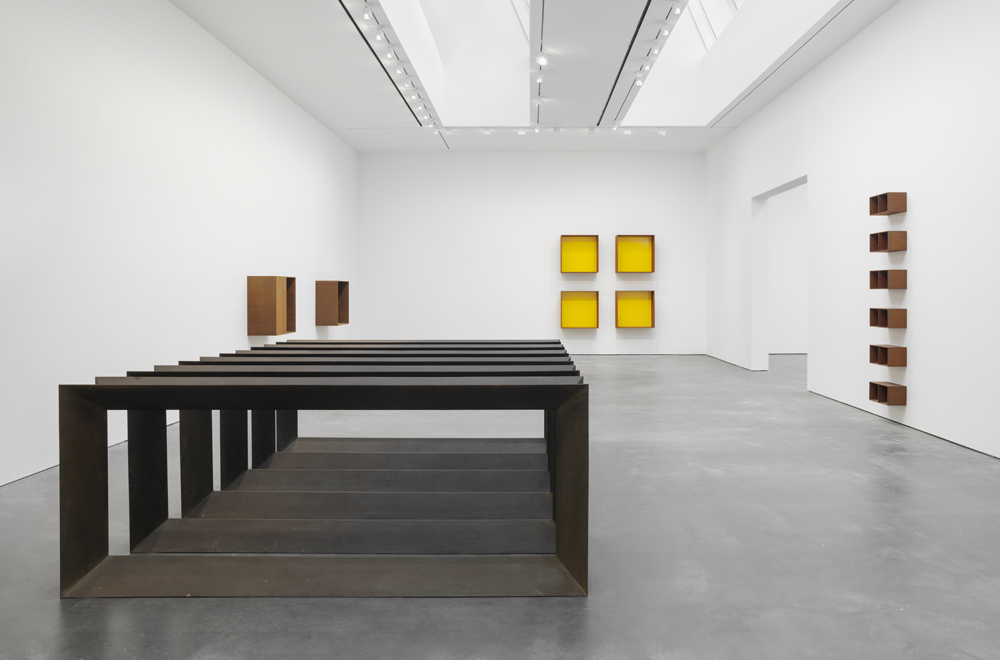 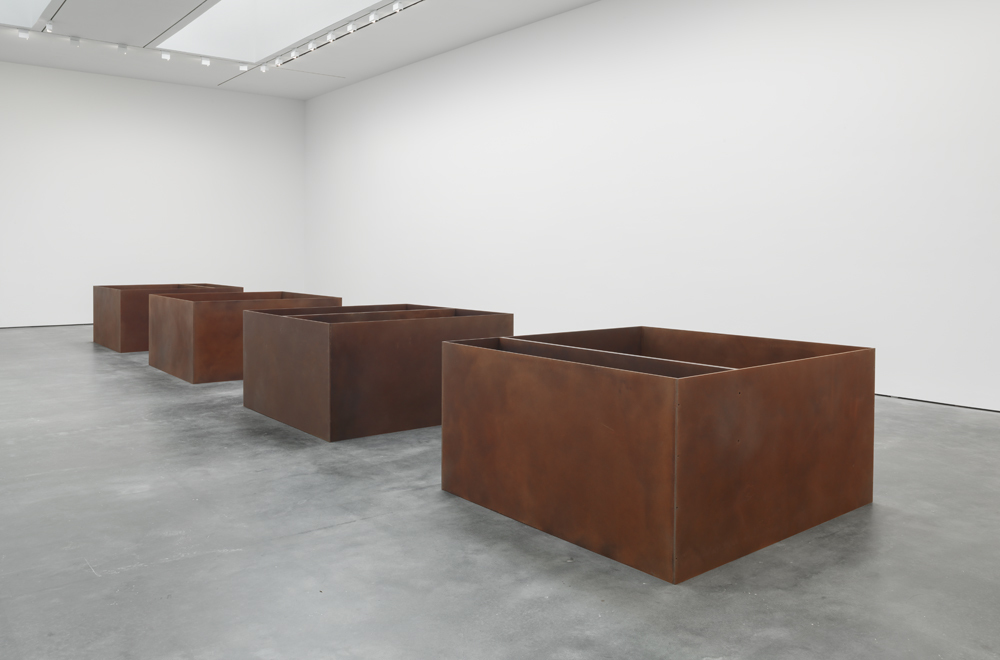 David Zwirner is pleased to present an exhibition of works in Cor-ten steel by Donald Judd, on view at 537 West 20th Street in New York. Organized in collaboration with Judd Foundation and curated by Flavin Judd, the selection will feature a range of forms in this distinctive material, which the artist began to produce in earnest in 1989 and would continue to elaborate on until his death in 1994. The first ever focused examination of Judd’s production in Cor-ten steel, this exhibition aims to elucidate this group of significant works and, by extension, Judd’s practice overall.

Throughout his career, Judd endeavored to produce objects that were entirely self-referential, writing in 1968, “A shape, a volume, a color, a surface is something itself. It shouldn’t be concealed as part of a fairly different whole.”1 Cor-ten afforded Judd a new avenue for exploring many of the fundamental preoccupations of his oeuvre, such as the relationships between surface and volume, as well as color and form.

In 1988, with the intention of localizing his production near his residence and studio in Marfa, Texas, where he had been living since 1973, Judd opened a workshop in a disused ice factory, naming it El Taller Chihuahuense (“The Chihuahuan Workshop,” after the Chihuahuan Desert, in which Marfa is located). The ability to make Cor-ten works in Marfa allowed Judd to quickly experiment with the material in a way not done before. El Taller Chihuahuense was a small-scale operation dedicated exclusively to the production of his works; the proximity of the workshop and ease of production was the closest Judd would return to a classical studio since his 19th Street loft where he made the works for his 1963 Green Gallery show by himself with his father’s help.

Although he had previously executed a handful of works in Cor-ten steel, primarily as outdoor commissions or site-specific works, Judd began to translate a number of his key free-standing and wall-mounted forms into Cor-ten, specifying after 1989 that these works not be placed outside so as to minimize the degradation of their surfaces over time. Made almost entirely in Marfa, this work represents the culmination of three decades of aesthetic output and underscores the mastery and control over material and space that characterizes Judd’s work as a whole.

Highlights from the exhibition will include four floor works from 1989, each measuring 1 x 2 x 2 meters, which relate to the anodized aluminum floor works installed by Judd in his exhibition at the Staatliche Kunsthalle BadenBaden that year. Open only on the top, these works are divided vertically in different spatial configurations, sometimes introducing color, thus implicitly exploring serial repetition and difference. Another floor work, from 1979—one of Judd’s earliest efforts in Cor-ten steel—comprises six slender, modular units, which are positioned closely together so as to give the viewer the impression of a single, cohesive whole.

Judd’s in-depth understanding of color is similarly established in this body of work—for example, six horizontally oriented units from 1990 set equally apart each juxtapose the Cor-ten support with backing made from black acrylic sheets. The exhibition will include a number of other wall-mounted forms that present the varying iterations that comprised Judd’s work. A single square-front, open box from 1989 transposes the formal composition of the floor works; and a group of four identically sized units from 1991 with painted yellow backs arranged in a square formation likewise underscores Judd’s ongoing investigation of form, color, spatial perception, and repetition in Cor-ten steel.

A fully illustrated catalogue with an essay by art historian Courtney Fiske is forthcoming from David Zwirner Books.

The work of Donald Judd (1928-1994) is included in numerous museum collections. Permanent installations of the artist’s work can be found at Judd Foundation spaces in New York City, at 101 Spring Street (following extensive restorations, 101 Spring Street re-opened to the public in June of 2013) and Marfa, Texas, along with the neighboring Chinati Foundation. The Judd ranch houses, Casa Morales, Casa Perez and Las Casas, are available for viewing by special appointment. Judd Foundation (Rainer Judd and Flavin Judd, Co-Presidents) is exclusively represented by David Zwirner. In 2011, the gallery exhibited a selection of works by the artist curated by Flavin Judd drawn from his seminal 1989 exhibition held at the Staatliche Kunsthalle Baden-Baden, Germany, and in 2013 a major installation by Judd was included in Dan Flavin and Donald Judd, the inaugural exhibition at David Zwirner’s West 20th Street location in New York. An exhibition of the artist’s key forms was presented at the gallery’s London space, also in 2013. In 2013-2014, The Pulitzer Foundation for the Arts in St. Louis presented Donald Judd: The Multi-Colored Works, and in 2017, The Museum of Modern Art, New York, working with Judd Foundation, will mount a major retrospective spanning the entirety of Judd’s career.