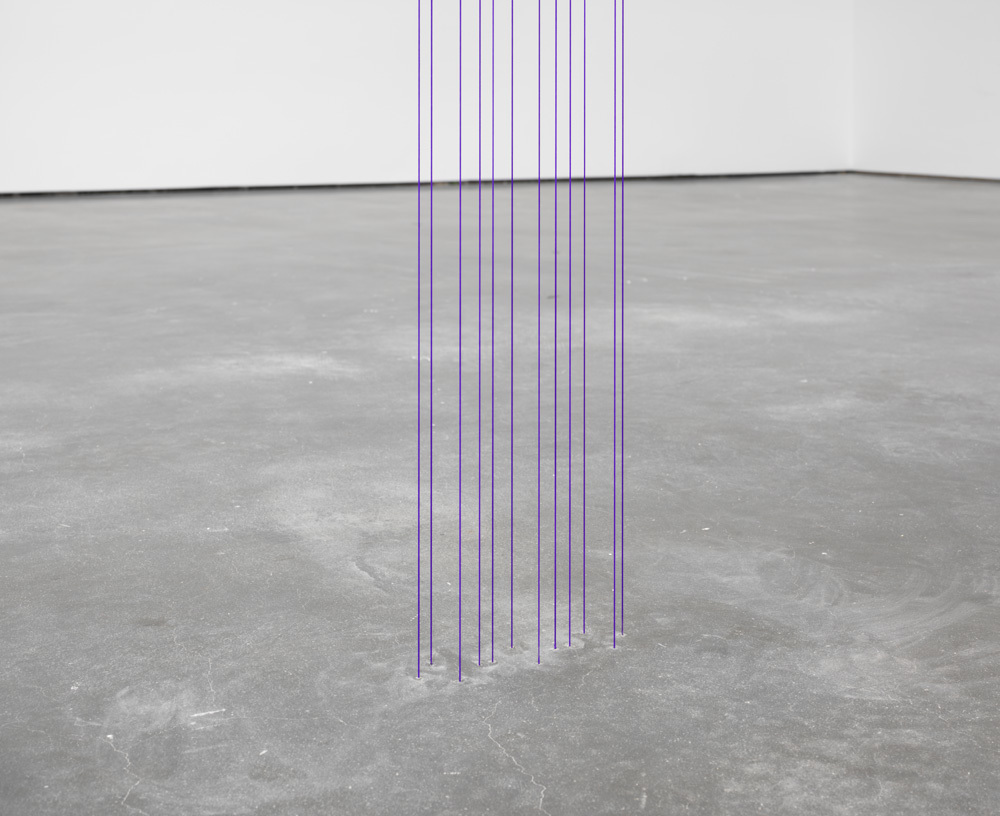 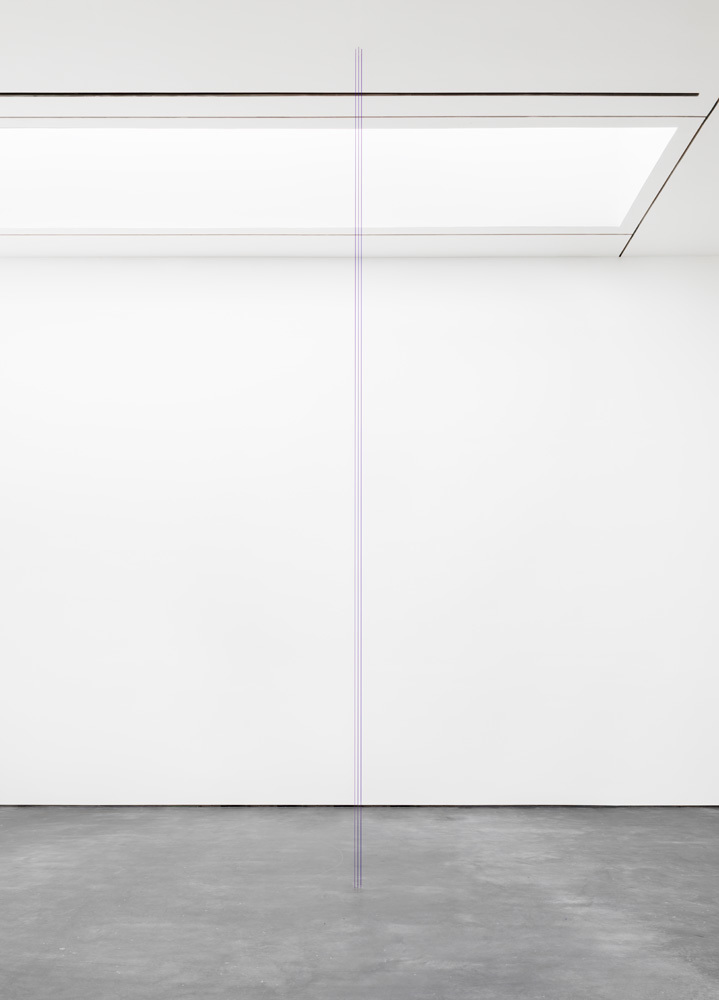 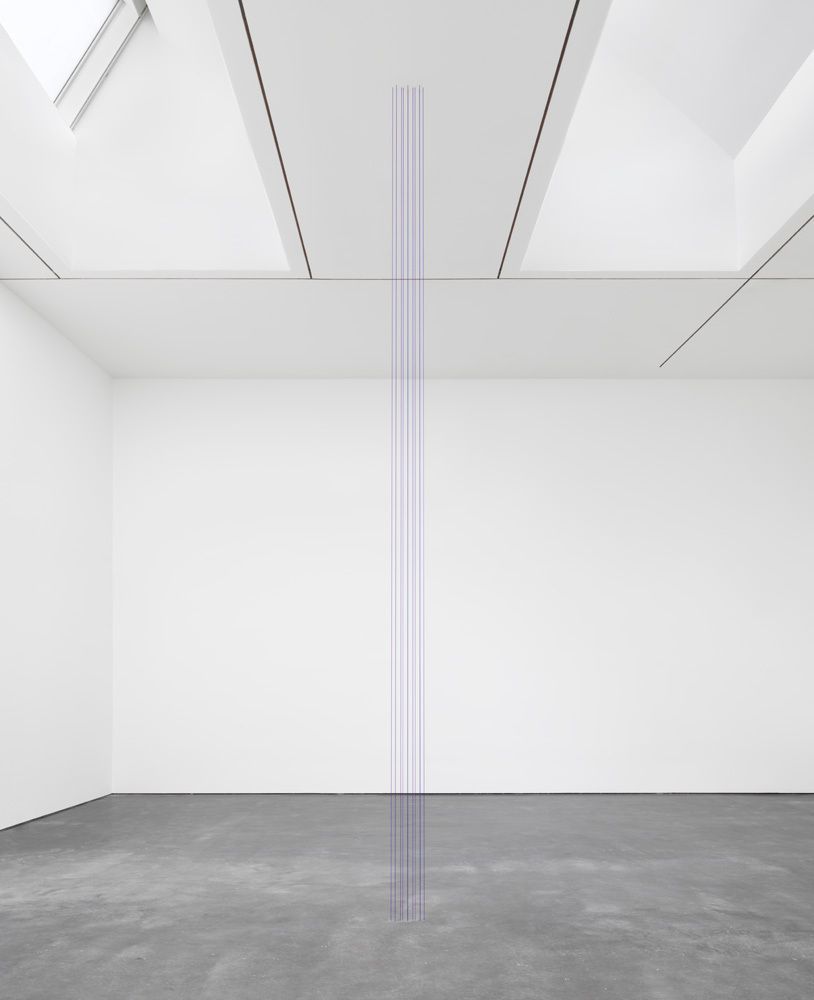 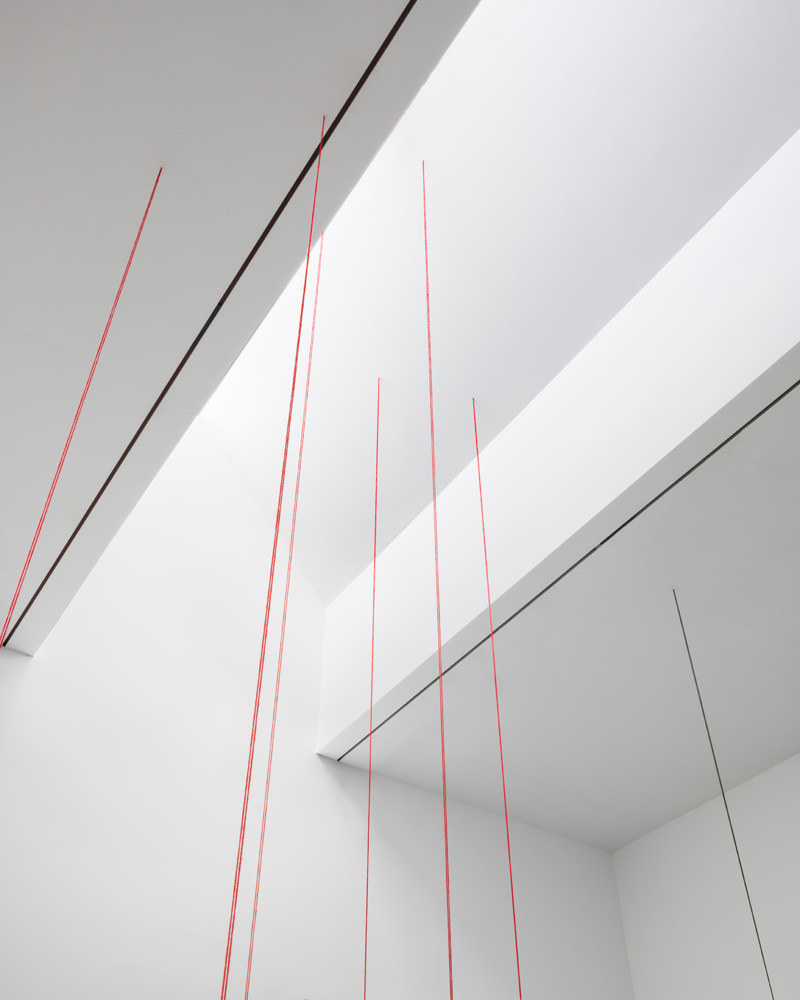 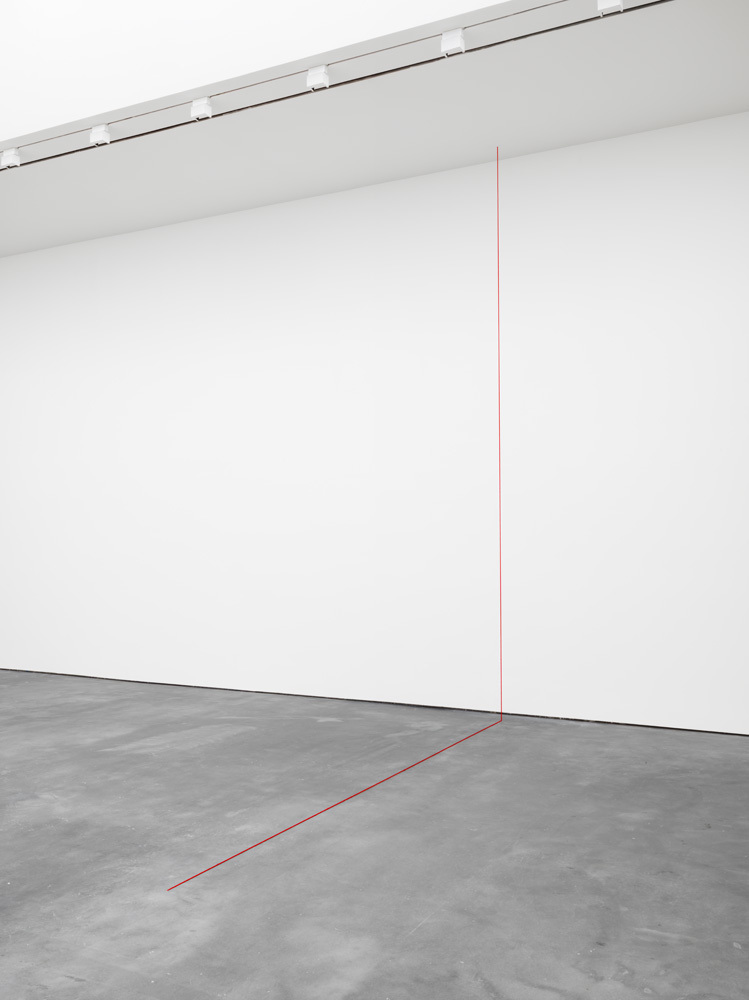 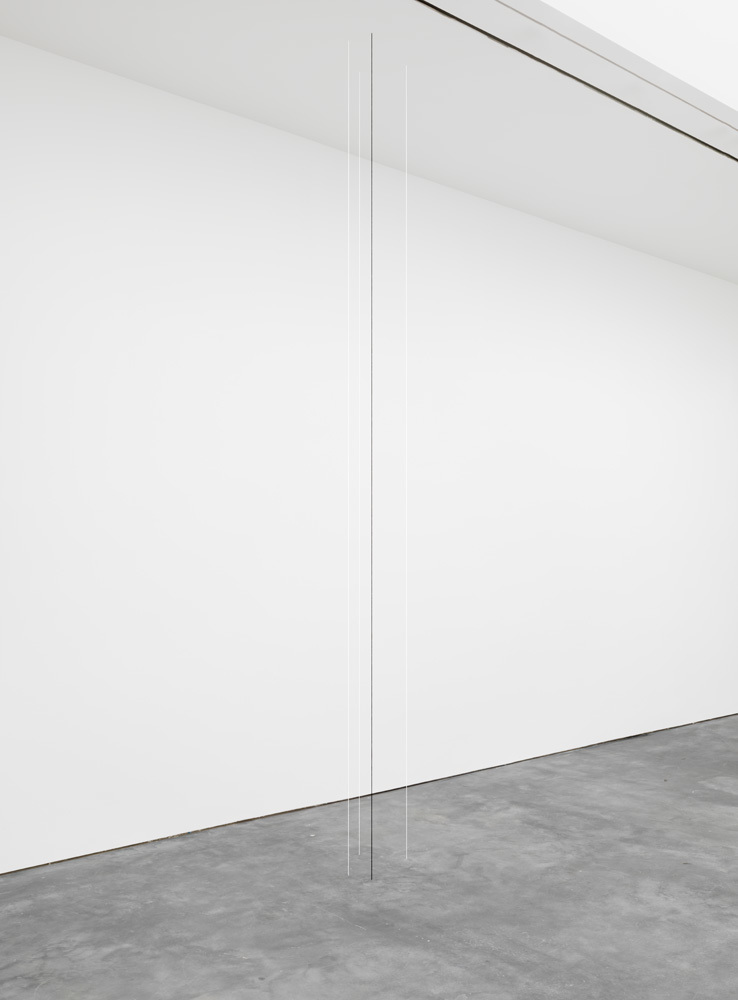 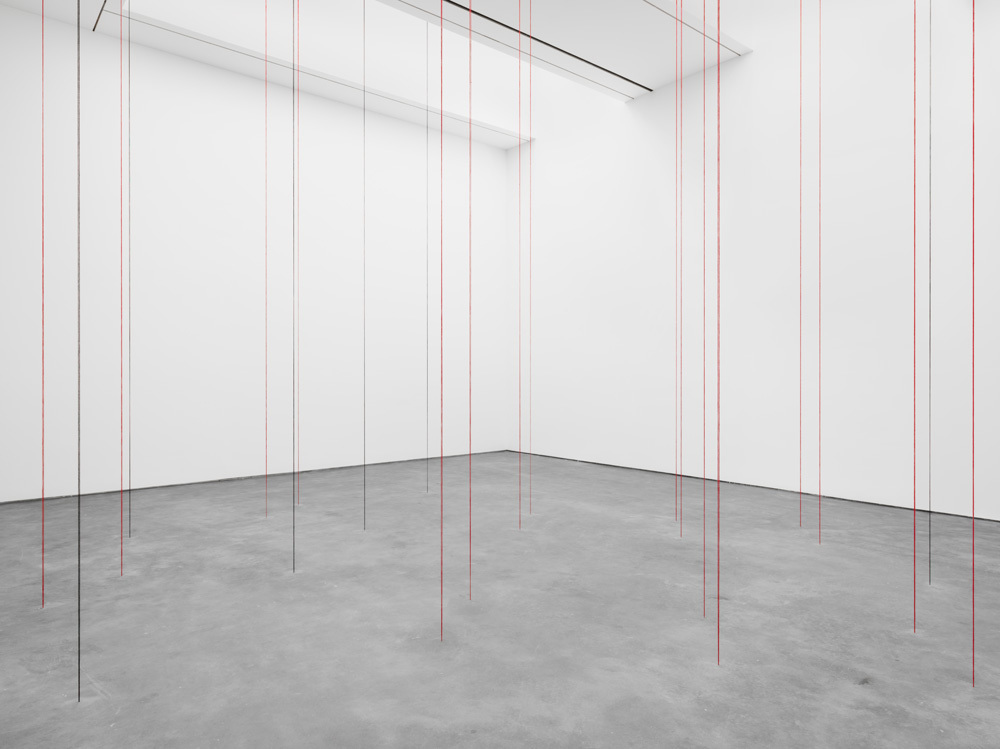 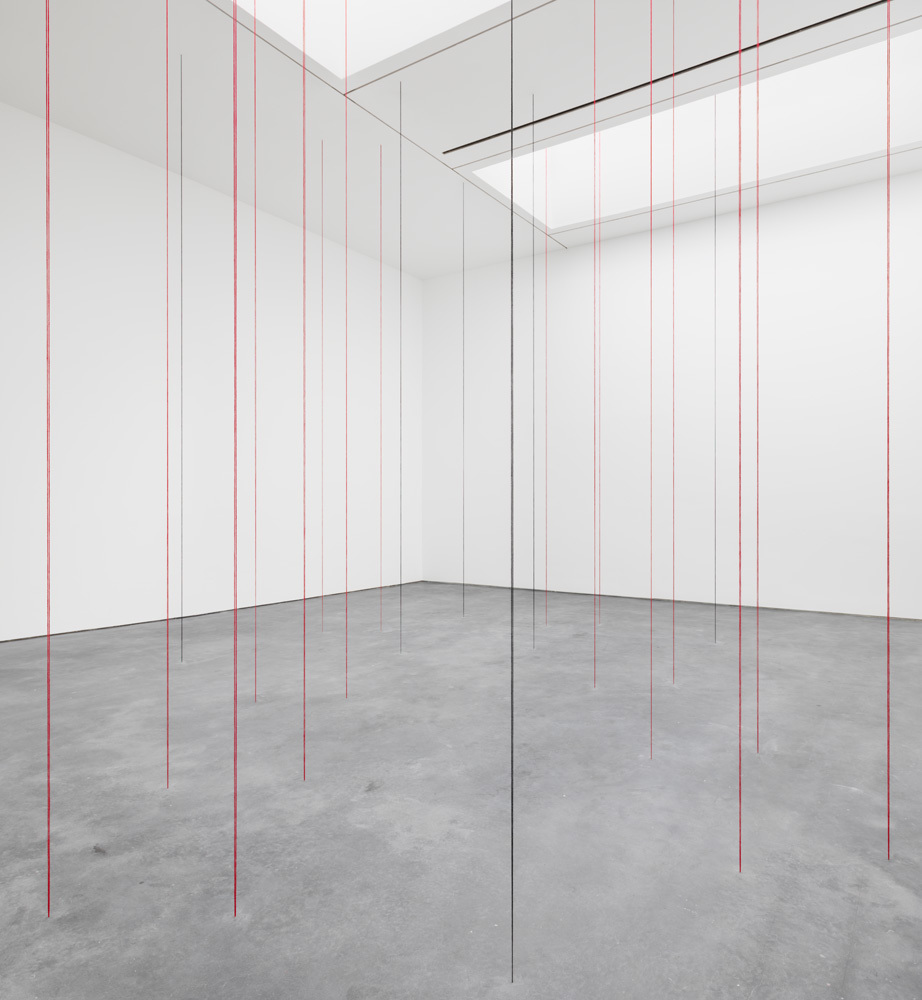 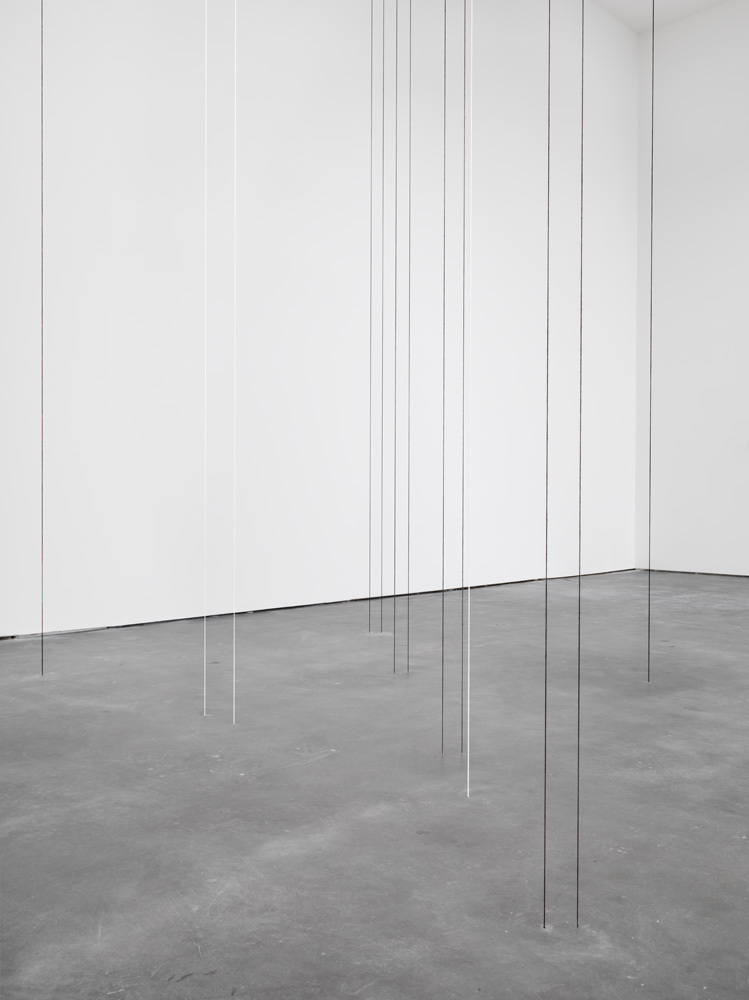 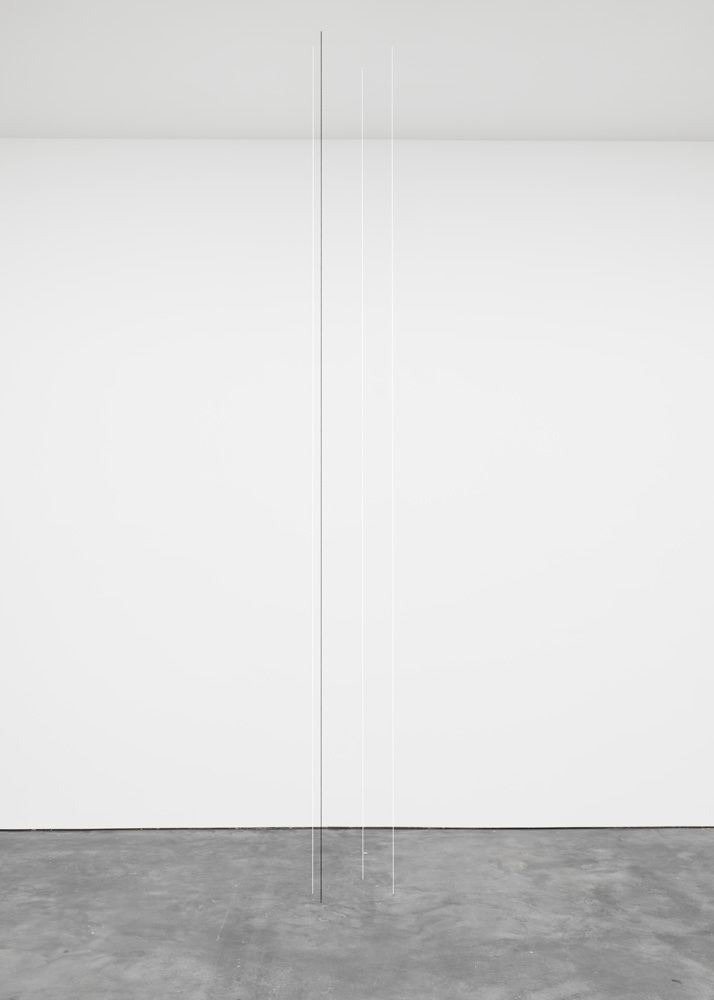 David Zwirner is pleased to present Fred Sandback: Vertical Constructions, on view at 537 West 20th Street in New York. Organized in conjunction with the Estate of Fred Sandback, the exhibition will recreate the artist’s important 1987 mid-career solo presentation at the Westfälischer Kunstverein, Münster, which featured six new works that each uniquely engaged vertical space. Drawn from both public and private collections, these works will be brought together for the first time since their initial installation and will be exhibited alongside key examples of vertical constructions spanning Sandback’s career.

Over the course of more than three decades, Sandback developed a singular, Minimal formal vocabulary that elaborated on the phenomenological experience of space and volume with unwavering consistency and ingenuity. Though he employed metal wire and elastic cord early in his career, the artist soon largely dispensed with mass and weight by using acrylic yarn to outline planes and volumes in space. By stretching lengths of yarn horizontally, vertically, or diagonally at different scales and in varied configurations, he created a wide-ranging body of works that inherently address their physical surroundings.

Sandback’s multipart vertical sculptures originate at the very beginning of his artistic career with works he created and installed in his studio at the Yale School of Art and Architecture in 1967. In 1977, he readdressed the form with a series of ten vertical constructions (collection of the Dia Art Foundation) and continued to develop his vertical constructions from that point forward. As the artist remarked in the catalogue for his 1987 exhibition in Münster, “Isn’t it quite natural to create vertical things, since this corresponds to the human body carriage?…The structure is so self-evident that it appeals to me just in and of itself.”1

Seen together, the vertical constructions on view succinctly encapsulate the primary concerns of Sandback’s practice and in particular highlight his multivalent use of the seemingly infinite vertical line. The work Untitled (Right-angled Construction), 1987, for example, which comprises two lengths of dark red yarn stretched perpendicularly to form an L-shape, foregrounds the synergistic relationship between Sandback’s sculptures and architecture. Other works, such as Untitled (Seven-part Vertical Construction), 1987 (Deichtorhallen Hamburg/Falckenberg Collection), which juxtaposes lengths of yellow, red, blue, and black yarn, evidence the artist’s facility with color, underscoring his notion of his sculpture as drawings in space. Untitled, 1987 (Whitney Museum of American Art), a U-shaped construction in black yarn—a signature form in the artist’s formal vocabulary—outlines a plane in space. Also on view will be Untitled, 1967, a rarely seen early vertical construction made using twelve closely situated lengths of purple cord, and Untitled (Sculptural Study, Twenty-two-part Vertical Construction), 1991/2016, an expansive work in red and black yarn. These works exemplify the artist’s radical break from a traditional conception of sculpture as a static object with fixed volume to an expanded notion of sculpture as an experiential open form that engages the “pedestrian space,” as Sandback called it, of everyday life.

The exhibition will be accompanied by a forthcoming catalogue published by David Zwirner Books that will feature a reprint of Marianne Stockebrand’s essay from the 1987 Westfälischer Kunstverein catalogue and archival documentation from that exhibition; as well as new scholarship on the artist by art historians Yve-Alain Bois, of the Institute for Advance Studies, Princeton, New Jersey, and Lisa Le Feuvre, Head of Sculpture Study at the Henry Moore Foundation, England.

The work of Fred Sandback (1943-2003) has been exhibited internationally since the late 1960s. His first solo shows were held at Galerie Konrad Fischer, Düsseldorf, and Galerie Heiner Friedrich, Munich, both in 1968 while the artist was still a graduate student pursuing his MFA at the Yale School of Art and Architecture. His work is on permanent display at Dia:Beacon, New York, and was the subject of an extensive survey organized in 2005 by the Kunstmuseum Liechtenstein, Vaduz (which traveled to the Fruitmarket Gallery, Edinburgh and the Neue Galerie am Joanneum, Graz, in 2006). In 2011, his work was featured in a solo exhibition at the Whitechapel Gallery, London, and the Museum of Contemporary Art, Denver, dedicated its entire building to a solo presentation of his work. In 2014, Kunstmuseum Winterthur, Switzerland, hosted the first major retrospective of Sandback’s drawings curated by Dieter Schwarz. This exhibition subsequently traveled to Germany to the Josef Albers Museum Quadrat Bottrop and Museum Wiesbaden. The Pulitzer Art Foundation, St. Louis, mounted an exhibition of Sandback’s work from May to September 2015. A major retrospective exhibition, Fred Sandback: Light, Space, Facts is currently on view at Glenstone, Potomac, Maryland, through December 2016.

David Zwirner has shown Fred Sandback’s work since 2004. This is the gallery’s sixth solo presentation of artist’s work, including a 2012 exhibition of important sculptures and drawings from each decade of his career at the gallery’s New York location and a 2013 exhibition at David Zwirner’s London location.