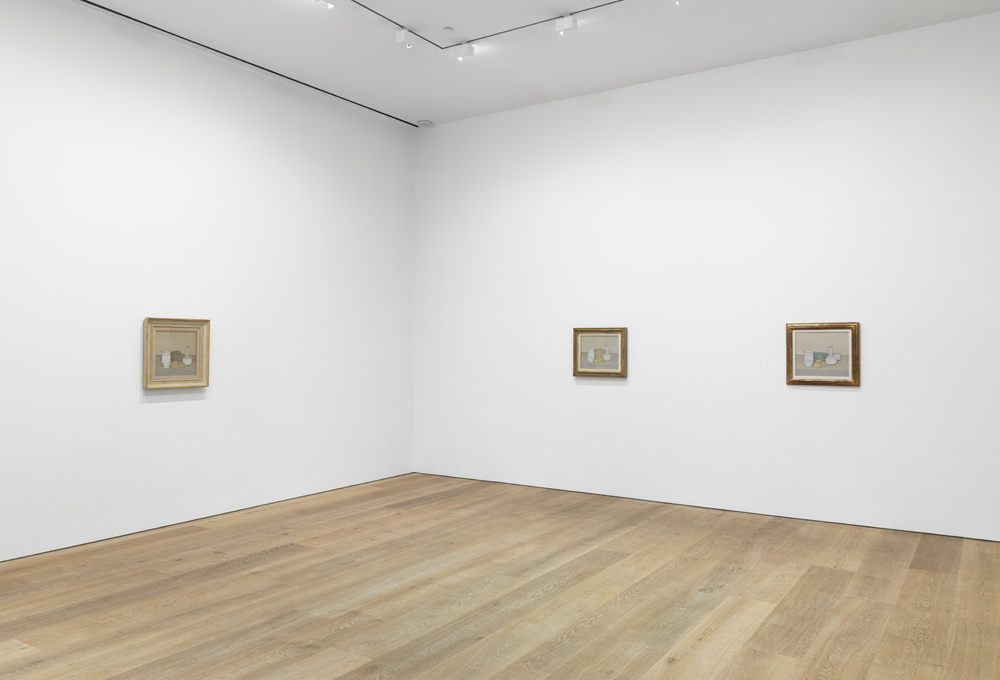 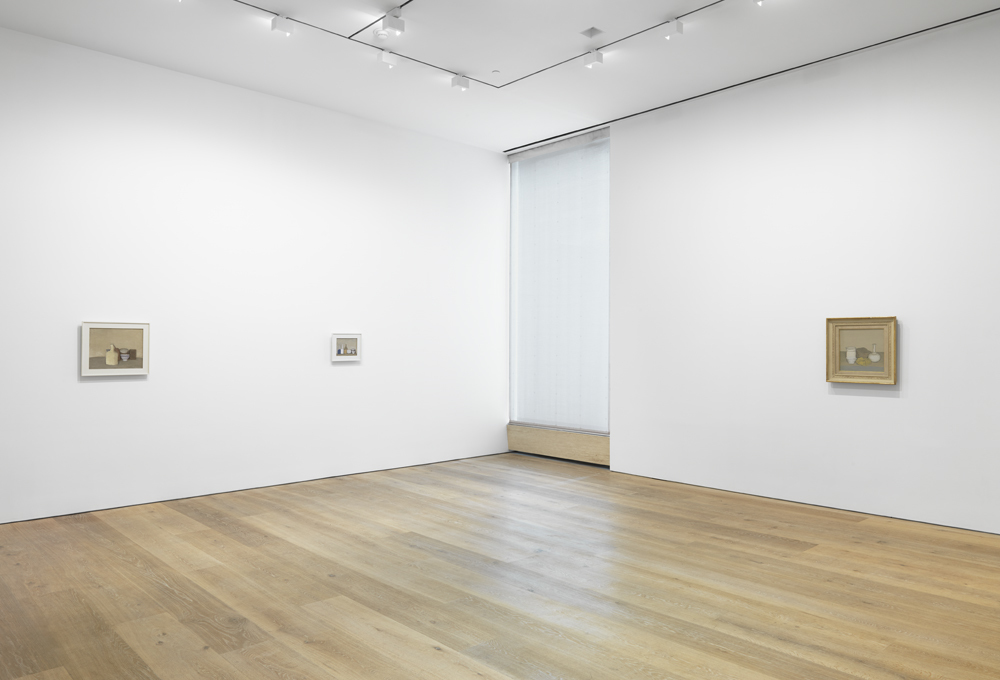 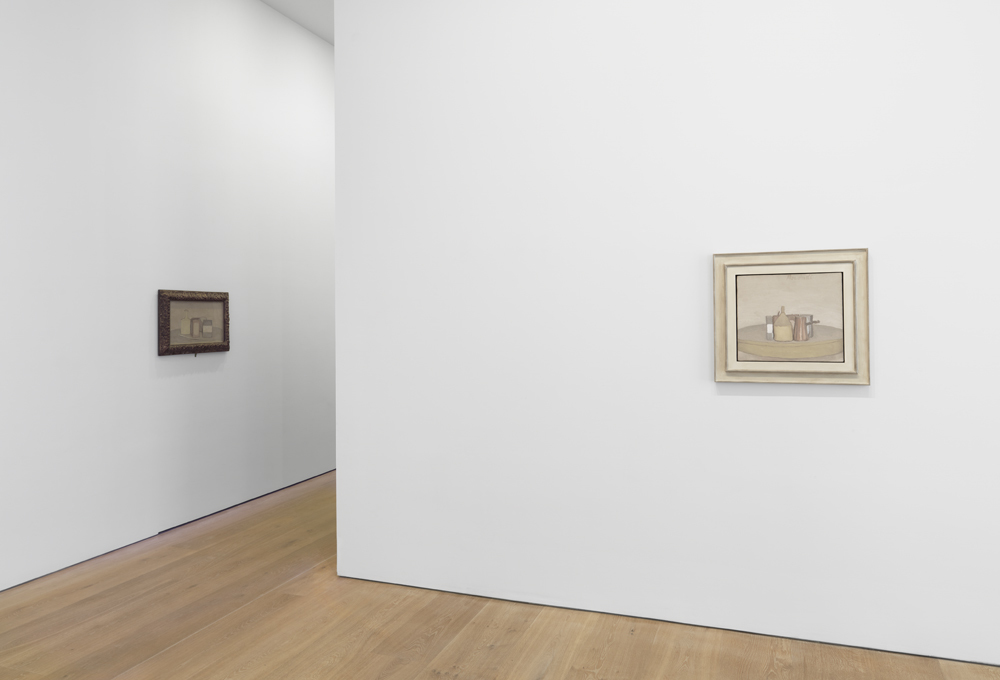 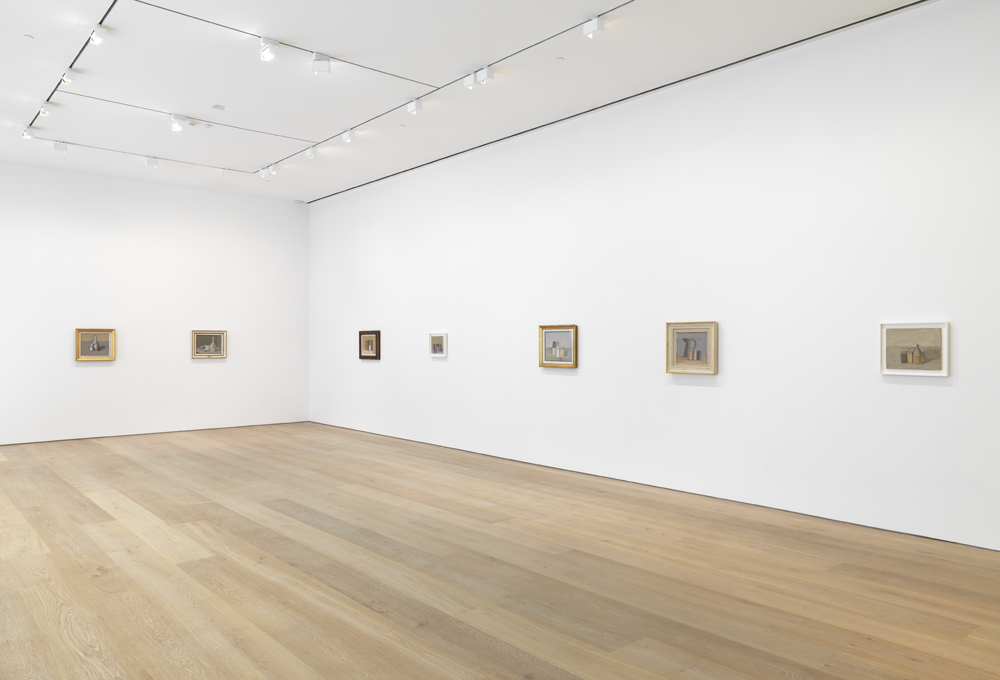 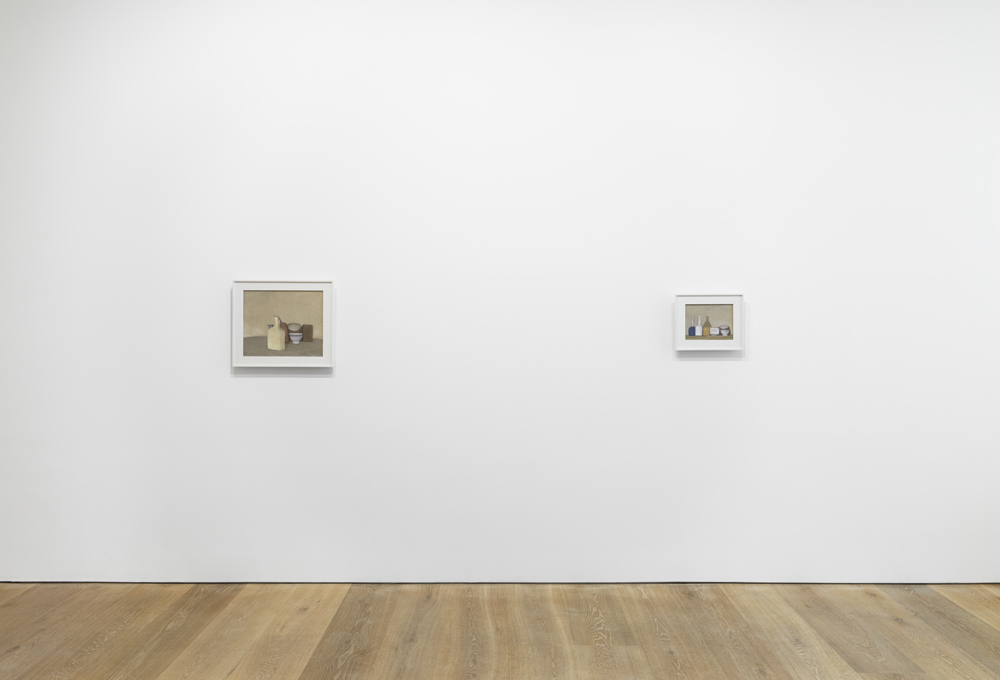 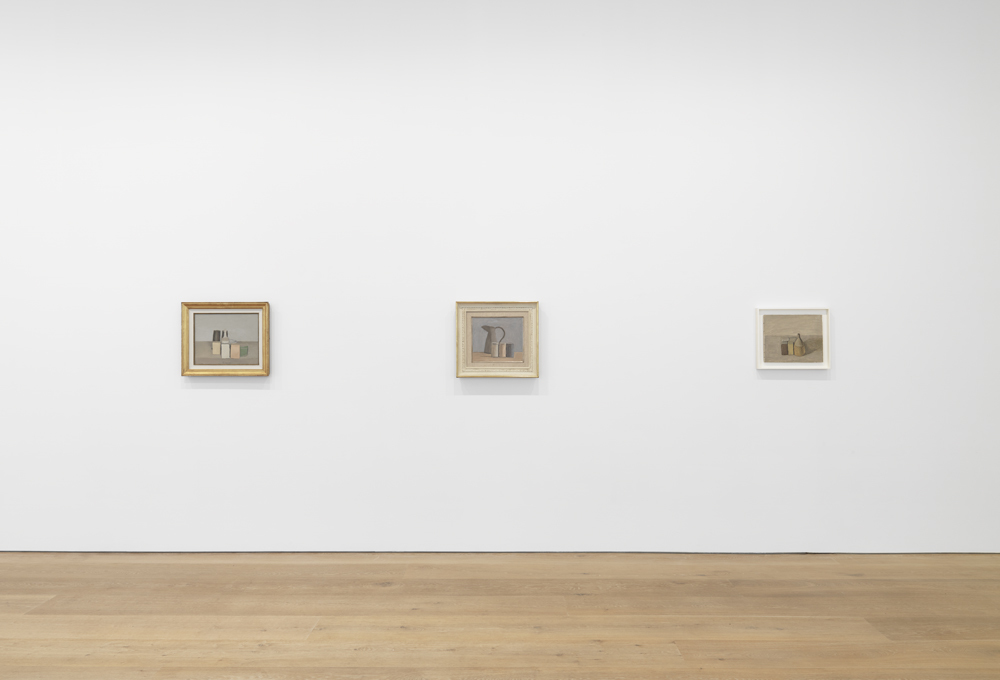 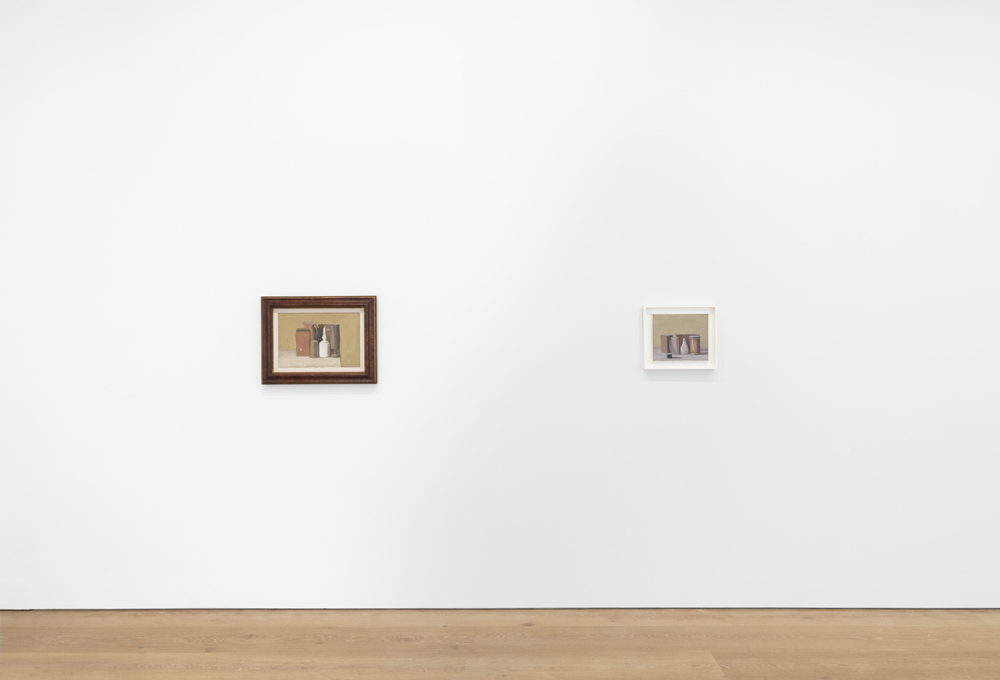 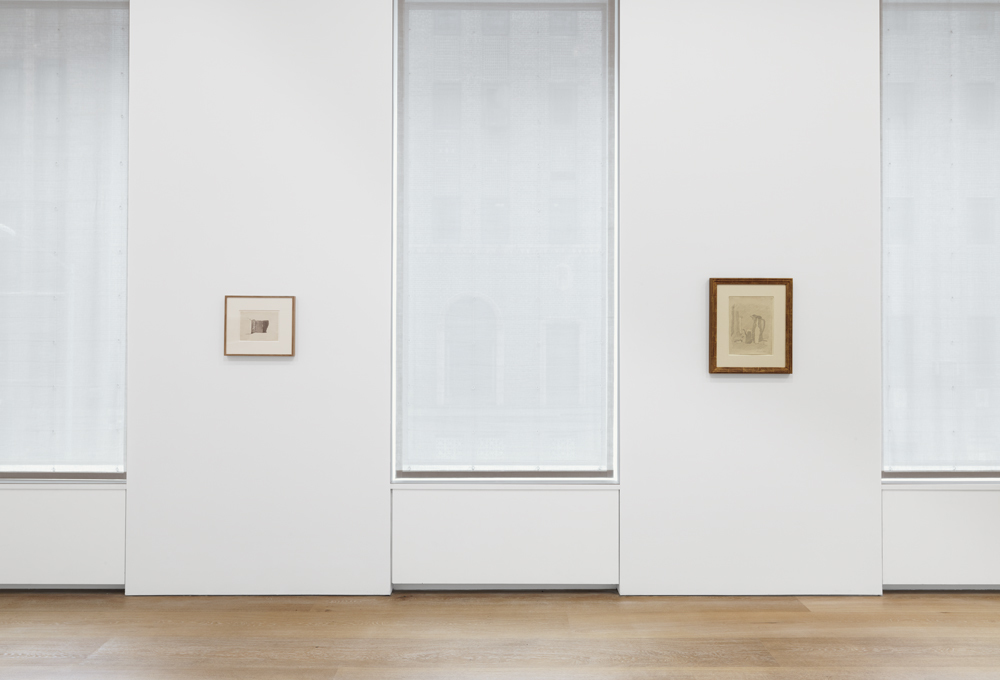 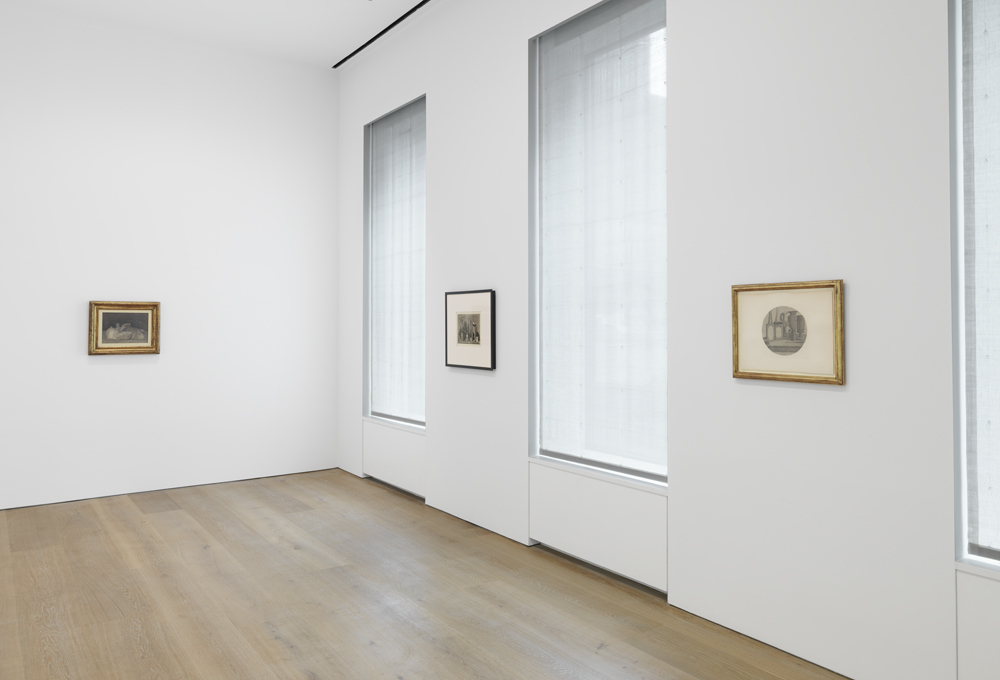 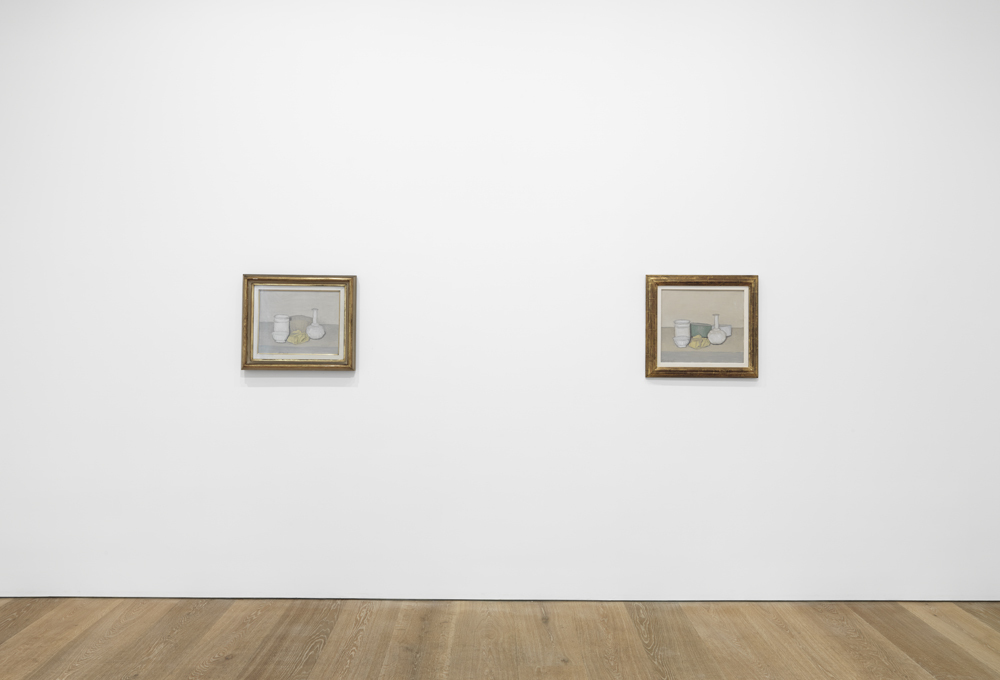 David Zwirner is pleased to present an exhibition of paintings from the 1940s to the 1960s by the celebrated Italian artist Giorgio Morandi (1890- 1964) on view at our 537 West 20th Street location in New York. The first major exhibition of Morandi’s later work in America since the acclaimed 2008 retrospective at the Metropolitan Museum of Art, New York, the show will focus primarily on the period during which he developed and refined his investigations of serial, reductive, and permutational forms and compositions—aspects that had a profound influence on twentieth-century and contemporary art and painting. The exhibition will include important loans from institutions such as the National Gallery of Art, Washington, D.C., as well as from numerous significant private collections.

Over the course of his five-decade career, Morandi was most prolific during the postwar years from 1948 until his death in 1964, when he executed more than half of his entire output of paintings. Throughout these intensely creative years, Morandi worked almost exclusively in series. Remaining dedicated to the repertoire of subjects that had occupied him since the early 1910s, including tabletop still lifes of bottles, boxes, vases, and flowers, as well as occasional landscapes, his variations on a given compositional motif became more persistent, nuanced, and abstract in the later part of his life. Through subtle shifts in color, tone, scale, composition, and mark-making, Morandi was able to convey the ever-changing perceptual understanding and memory of the objects and spaces one encounters.

Although Morandi rarely traveled outside of Italy and never beyond Europe, his work was exhibited internationally and was included in a number of landmark presentations in the United States beginning in the late 1940s, such as Twentieth-Century Italian Art, organized by Alfred H. Barr, Jr. and James Thrall Soby at The Museum of Modern Art, New York, in 1949; the important exhibition Painting in Post-War Italy, 1945-1957, at the Casa Italiana at Columbia University, New York; and The New Renaissance in Italy at the Pasadena Art Museum, California—both in 1958, which captivated an American audience. While the subsequent impact of Morandi’s work on artists such as Andy Warhol, Jasper Johns, Robert Ryman, Agnes Martin, Wayne Theibaud, and Luc Tuymans is well recognized, his legacy also extends to the realm of sculpture and installation art. The simplicity of his compositions, the logic of differentiated repetition, the placement of objects in series, and the increasing emphasis on geometry and spatial concerns were prescient to the development of Minimalism and the works of Sol LeWitt and Dan Flavin, as well as to the sequential works of Conceptual artists On Kawara and Roman Opalka. Moreover, artists associated with the Light and Space movement, such as Robert Irwin, responded to the phenomenological aspects of Morandi’s works, particularly the spatial and temporal ambiguities produced through the play of color and light, the blurring of object and background, and the uncertain state of material presence and absence. Much like these artists, Morandi in a 1957 letter remarked, “The only interest the visible world awakens in me concerns space, light, color, and form.”1

Morandi’s serial and permutational investigations are perhaps nowhere more apparent than in his still life compositions. Included in this exhibition are four of the artist’s iconic yellow cloth paintings: executed in 1952, the paintings from this series each depict a group of three to five bottles arranged on a tabletop and clustered around a crumpled yellow cloth. By varying the hue of the central bowl as well as the shapes and configurations of the vessels and cloth, Morandi articulated faint but profound distinctions and affinities of color, shape, and volume. Also included in the exhibition is a pivotal 1956 canvas from a series in which Morandi foregrounded rectangular blocks of rich yellow, salmon, and cream colors, whose geometric forms relate most closely to those of Minimalist sculpture. Several paintings depicting Morandi’s favored subjects—a yellow Persian bottle, a white fluted vase, and a water jug—will also feature in the exhibition. The artist’s serial depiction of these objects, shown variously arranged in irregular configurations and tightly compacted so as to layer, abut, and obfuscate the shapes of adjacent forms, elaborate Morandi’s credo that “Nothing is more abstract than reality.”2

Giorgio Morandi was born in 1890 in Bologna, Italy, where he lived until his death in 1964. From 1907-13, he was enrolled at the Accademia di Belle Arti Bologna, where he later served as the professor of engraving and etching from 1930-56. In 1913-14, he established connections and exhibited with Italian Futurist artists such as Umberto Boccioni, Giacomo Balla, and Fortunato Depero, and in 1918-19, he worked briefly as part of the Scuola Metafisica with Giorgio de Chirico and Carlo Carrà. By 1920, Morandi established the small scale depictions of still lifes and landscapes that he would pursue for the remainder of his career, and that were associated with no other school or style but his own.

Morandi was a member of the prestigious Accademia delle Arti del Disegno, Florence; the Accademia Nazionale di San Luca, Rome; and the Swedish Academy. In 1993, the Museo Morandi was established in Bologna, Italy, and is currently located in the Museo d’Arte Moderna di Bologna.