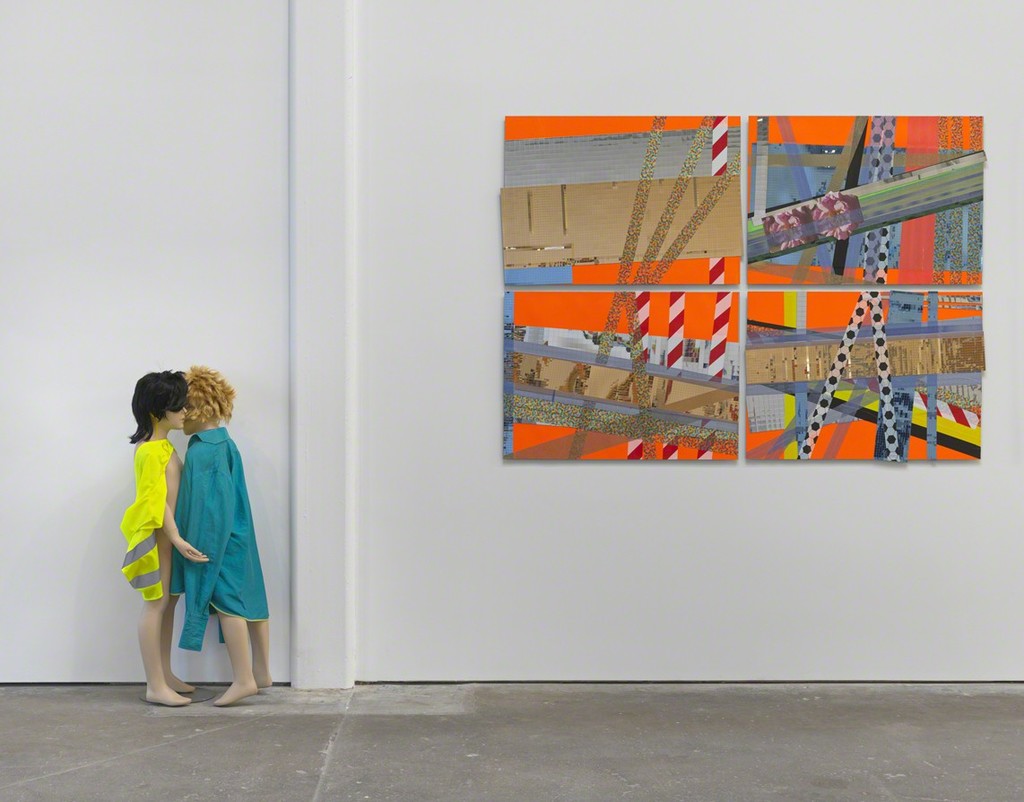 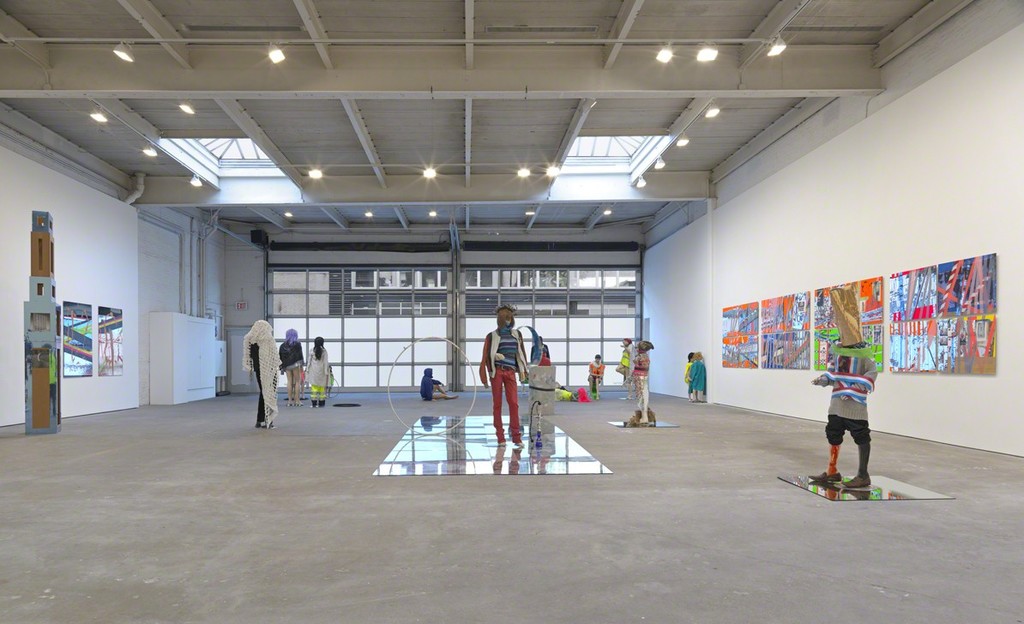 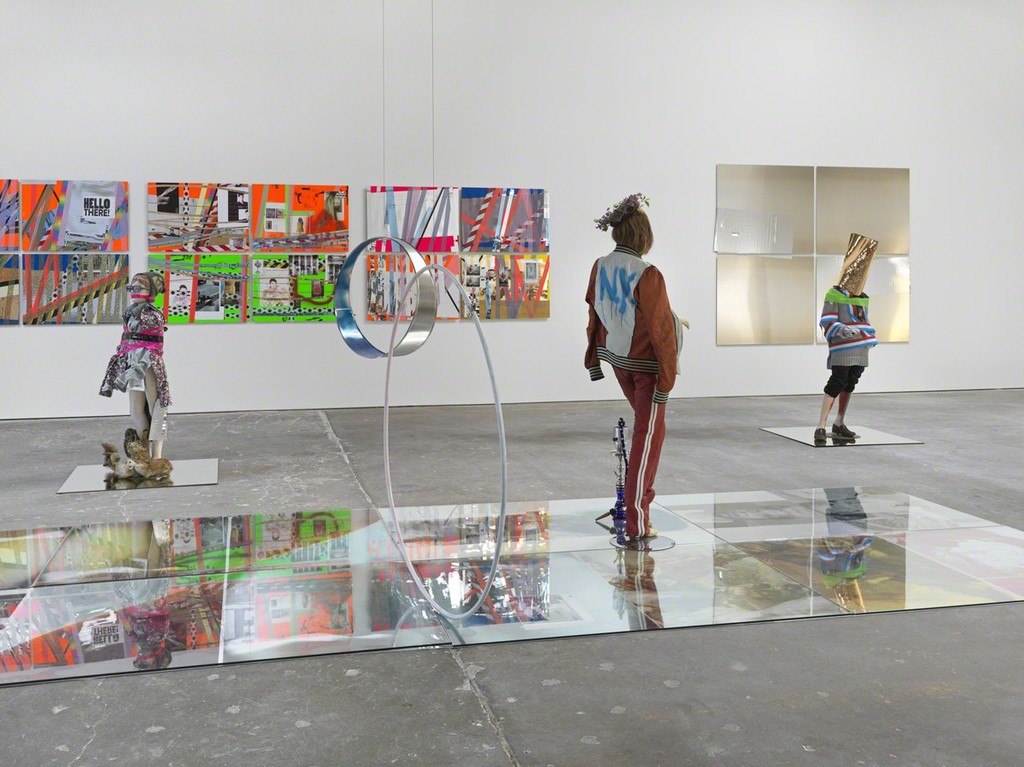 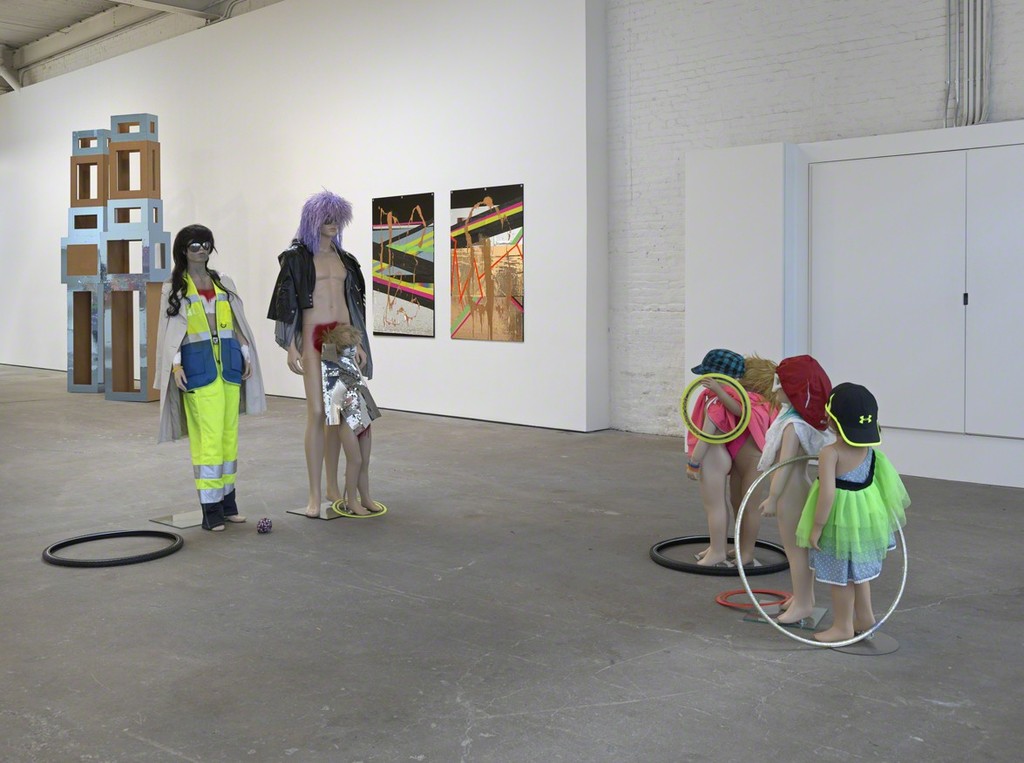 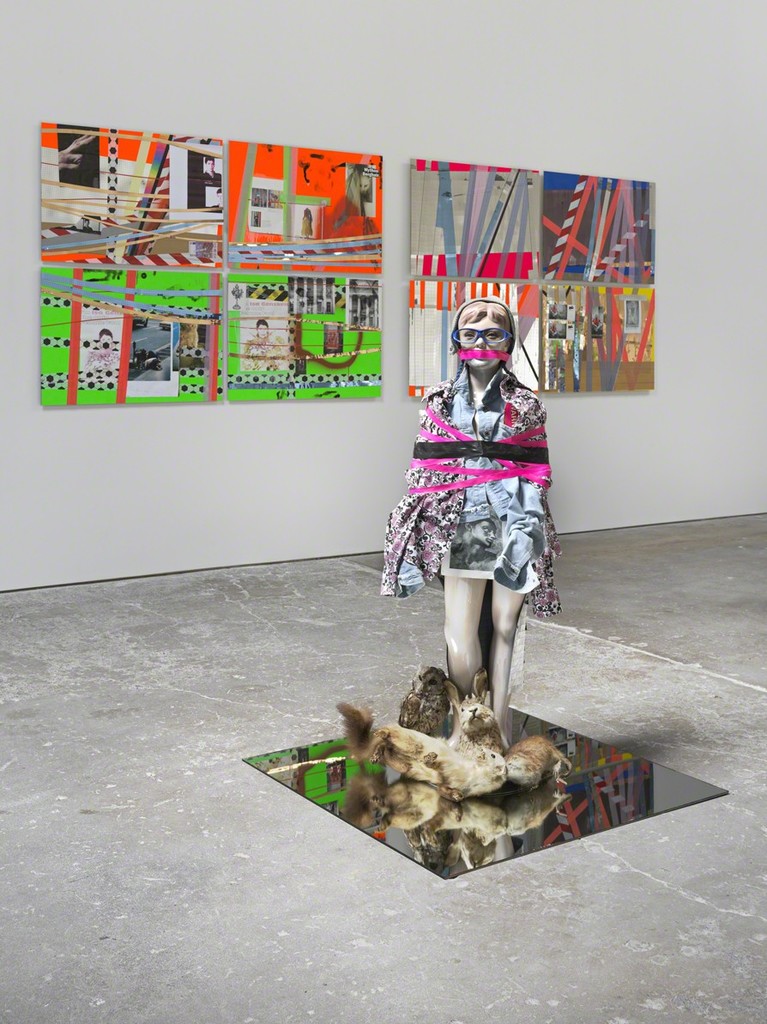 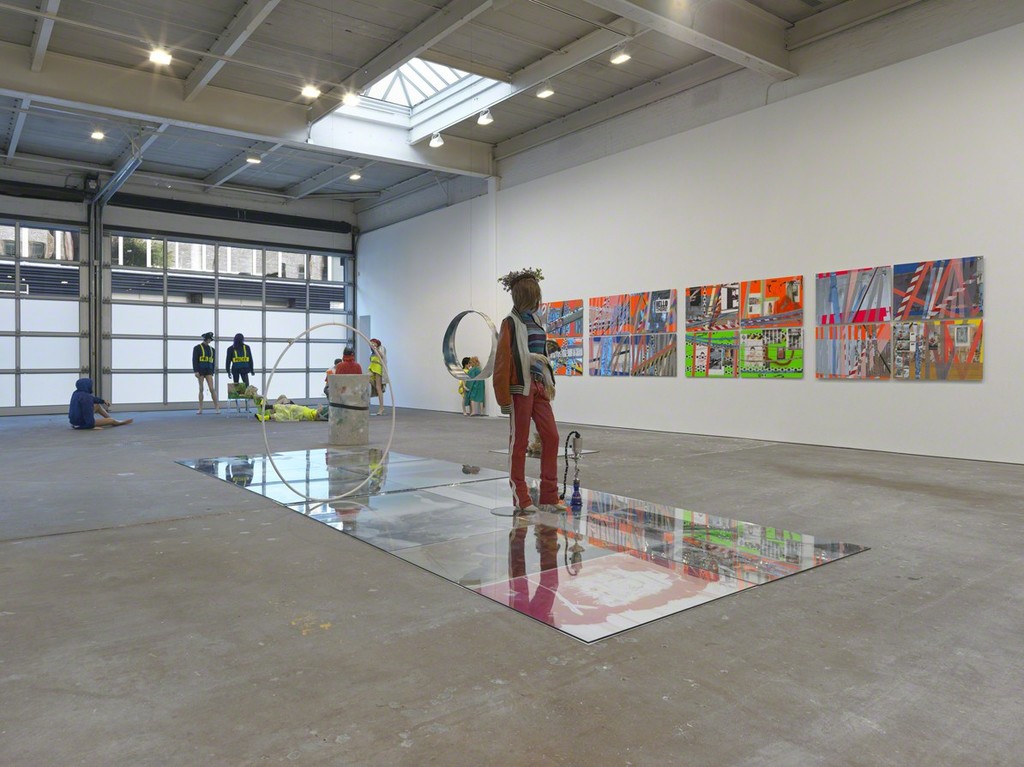 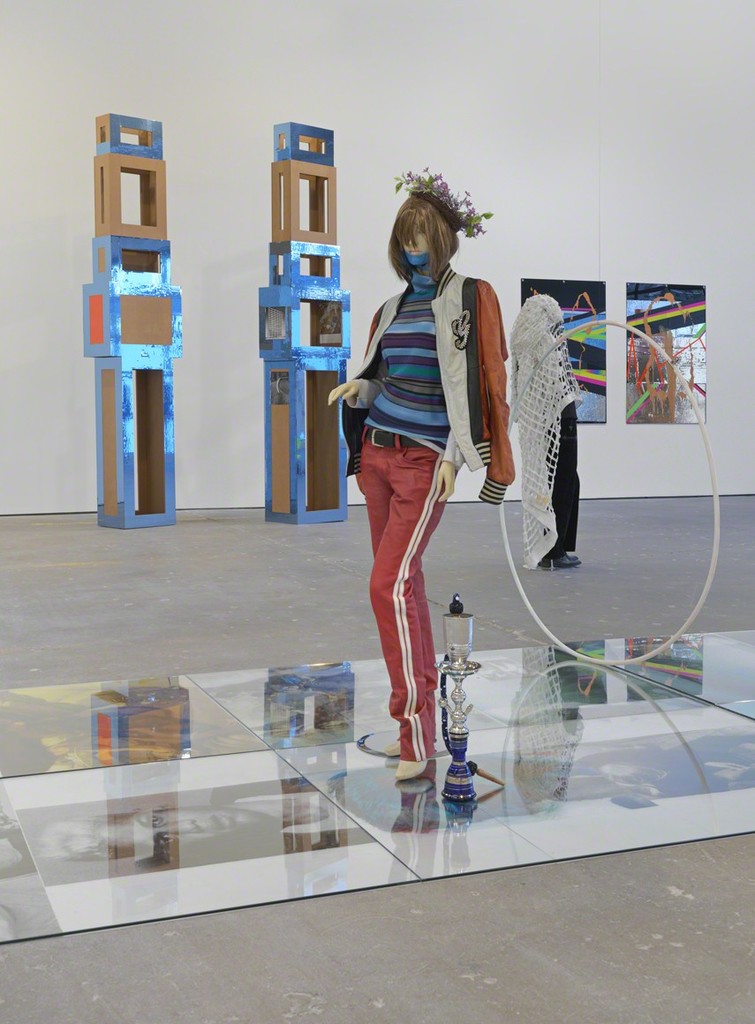 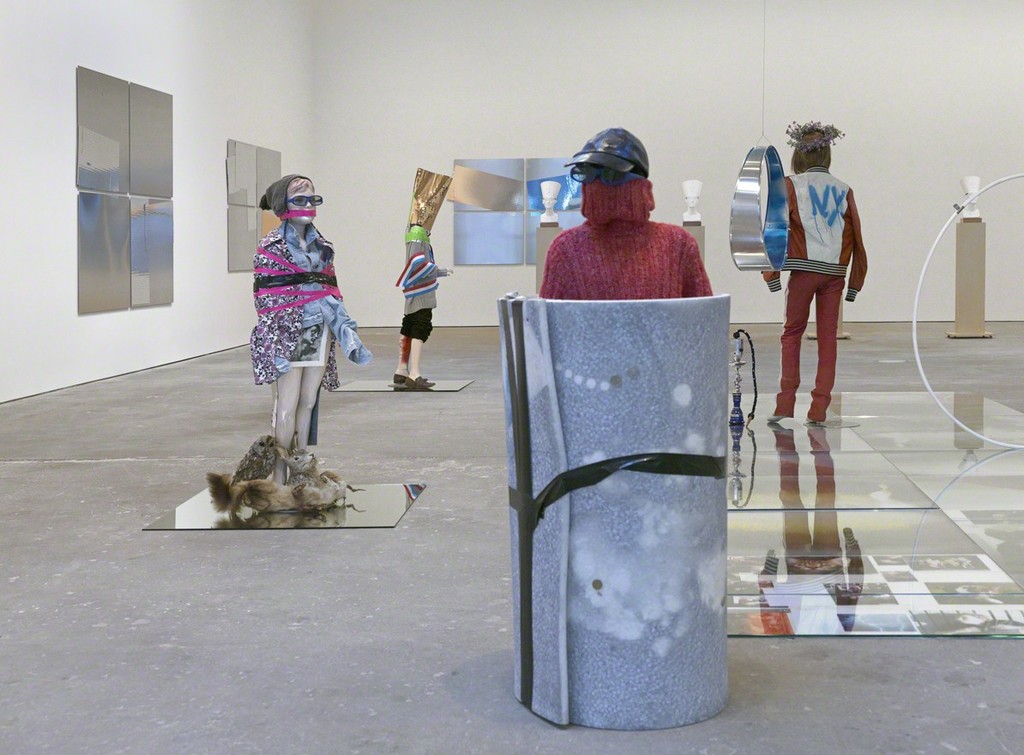 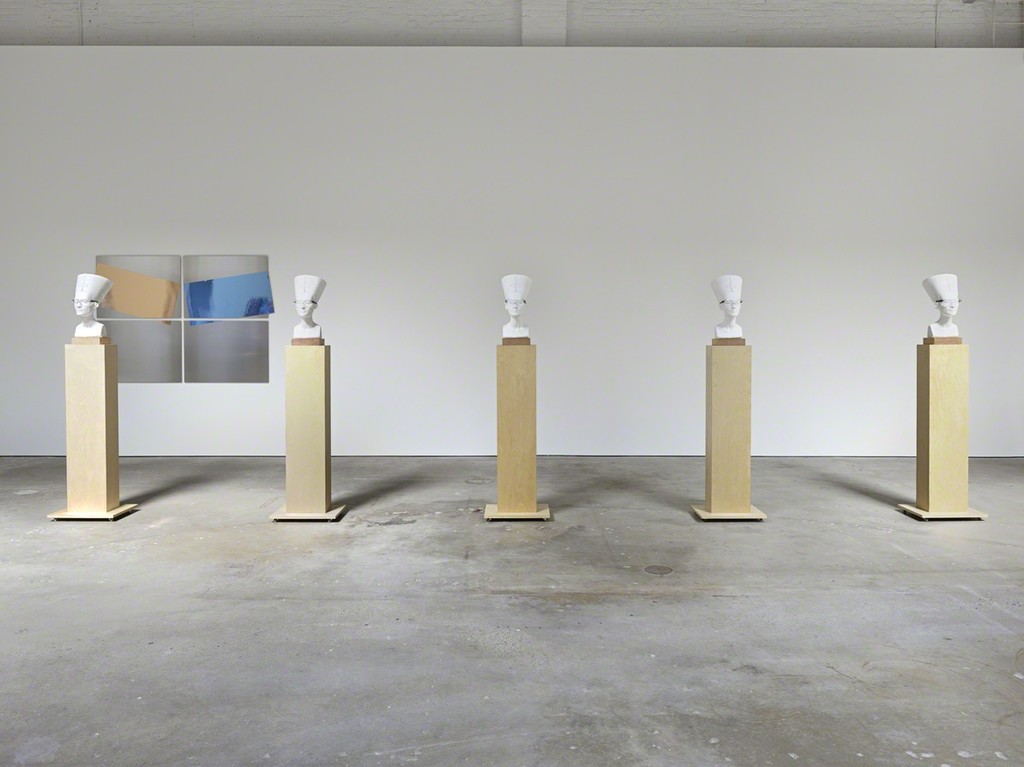 David Zwirner is pleased to present an exhibition of recent and new work by German artist Isa Genzken, marking her third solo show with the gallery since she joined in 2004. On view at 519 West 19th Street in New York will be two- and three-dimensional assemblages from the past two years by the artist, who is widely recognized for her significant, pioneering contribution to contemporary sculpture.

With a career spanning four decades, Genzken's works draw upon everyday material culture, including design, consumer goods, the media, architecture, and urban environments. In addition to sculpture and installation art, her prodigious oeuvre includes paintings, collages, drawings, films, and photographs, and frequently incorporates seemingly disparate materials and imagery to create characteristically complex, enigmatic works. Drawing loosely on the legacies of Constructivism and Minimalism and often involving a critical, open dialogue with Modernist architecture, her interest lies in the way in which common aesthetic styles come to illustrate and embody contemporary political and social ideologies.

The exhibition will highlight recent freestanding floor sculptures belonging to Genzken's Schauspieler (Actors) series, which debuted as part of her critically acclaimed retrospective organized by The Museum of Modern Art, New York in 2013. The series, consisting of elaborately outfitted mannequins holding an array of props and accessories, marks a new direction within her practice: with the mannequin functioning as the sculpture's base, the artist employs a figurative idiom—presently making it her most explicit engagement with the human form—in contrast to the abstract and geometric modes that characterized previous work.

Simultaneously simple and chaotic, static and dynamic, the Schauspieler (Actors) works engage with the architecture of the body, physically addressing the viewer through scale, as well as self-portraiture—some of the mannequins wear the artist's own clothing. Examples on view include Schauspieler II, 1 that comprises a female figure dressed in red leather pants and a bomber jacket casually draped over her shoulders. On the jacket's back is "N.Y." spray-painted in blue, and this color reappears on the figure's front side, partially covering her neck and chin. Other sculptures take on otherworldly, alien-like appearances, such as Schauspieler II, 3, in which the top part of the mannequin is covered by a fabricated, conical-shaped headpiece made from mosaic-style bronze mirror foil, and Schauspieler II, 10, whose lower body is completely encased by a roll of silver-sprayed packing foam. Within the gallery space, the mannequins at first glance seem to be ordered randomly, yet have been positioned by Genzken in various arrangements—alone, as couples, or in groups, facing each other or looking away. These highly charged configurations heighten the psychological tension within the exhibition, and exemplify how the artist skillfully utilizes formal aesthetic conventions to explore externalized and internalized social space.

Also on view will be two new large-scale architectonic structures, representing the first works in a series recently begun of mini-skyscrapers constructed from medium-density fiberboard and collaged with tiled mirror foil and photographic elements. Measuring over 3 meters, each tower consists of five stacked rectangular boxes, alternating in size and position. While the surface treatment varies slightly between each sculpture, their forms appear identical in profile, and given the exhibition's context, they draw a powerful allusion to the former twin towers of the World Trade Center.

The exhibition will include new sculptures that continue her body of work started in 2012, in which Genzken places contemporary eyewear onto plaster replicas of the bust of Nefertiti, an ancient Egyptian queen whose image evokes a feminine beauty ideal (the original bust is permanently housed at the Neues Museum in Berlin, where the artist resides). Consistent with the strategy of placing objects on pedestals at eye level, which she has implemented since the 1980s, the Nefertitis are installed on wooden plinths in relation to the viewer's gaze. Whereas in earlier versions, the busts retain the original colorful painted features and sport an assortment of sunglasses, the exhibited examples appear colorless, leaving on display the bare white plaster, and are shown in uniform, clear protective glasses. Here, Genzken positions five Nefertiti sculptures in a row, forming a type of colonnade, and coupled by the figures' visual oneness and stark whiteness, seemingly imbues the overall installation with a processional, almost elegiac tone.

Several of the artist's latest wall-mounted flat works will be presented. Developing out of her 2002 series Soziale Fassaden (Social Façades), they are made by layering various reflective materials and incorporate a diverse range of found and traditional media, mining such wide-ranging points of reference as the façades of corporate towers, disposable packaging, construction barriers, modern design, and nightclub aesthetics, among others. In particular, a recent group entitled Briefmarken (Stamps) appear to be visually complex poster- or billboard-like arrangements. Brightly colored, each of these abstract collages is composed of four equally sized, rectangular panels placed into a 2-by-2 grid. Viewed together, alongside other untitled wall pieces, these works demonstrate the artist's continued fascination with the relationship between architecture and art, commercial goods, and everyday experience.

Born in 1948 in Bad Oldesloe, Germany, Isa Genzken studied fine arts, art history, and philosophy in Hamburg, Berlin, and Cologne, before completing her studies at Kunstakademie Düsseldorf in 1977. Since 2004, her work has been represented by David Zwirner. Previous solo shows were held at the gallery in New York in 2005 and 2007.

Genzken's new large-scale sculpture Two Orchids is displayed in Venice as part of the 56th Venice Biennale: All the World's Futures (through November 22, 2015). Opening in November 2015 will be an extensive survey of her work at the Stedelijk Museum, Amsterdam.

In 2014, Isa Genzken: New Works was presented at the Museum der Moderne Salzburg, Austria and subsequently traveled earlier this year to the Museum für Moderne Kunst (MMK), Frankfurt. In 2013, The Museum of Modern Art, New York organized Genzken's first American museum survey, Retrospective, making it the most comprehensive presentation of her work to date, encompassing all media from the past forty years. The show traveled to the Museum of Contemporary Art Chicago and the Dallas Museum of Art in 2014.