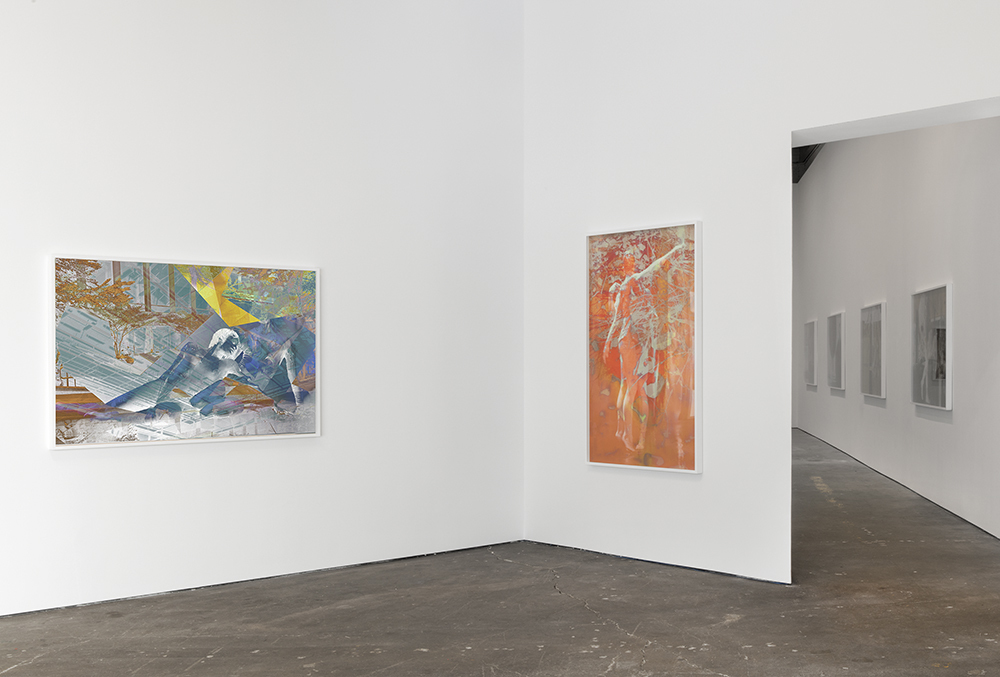 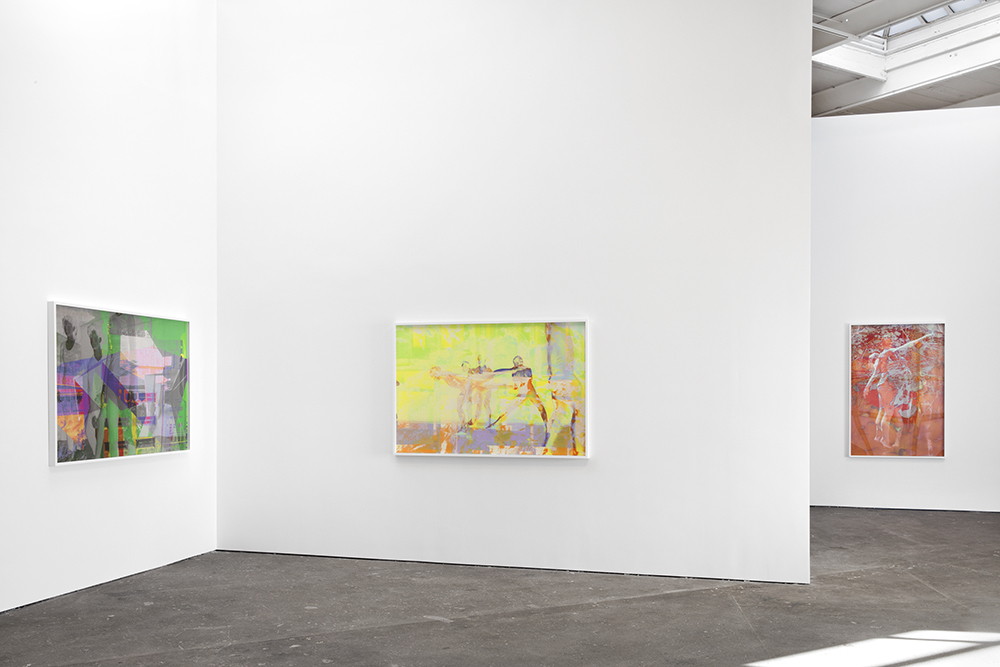 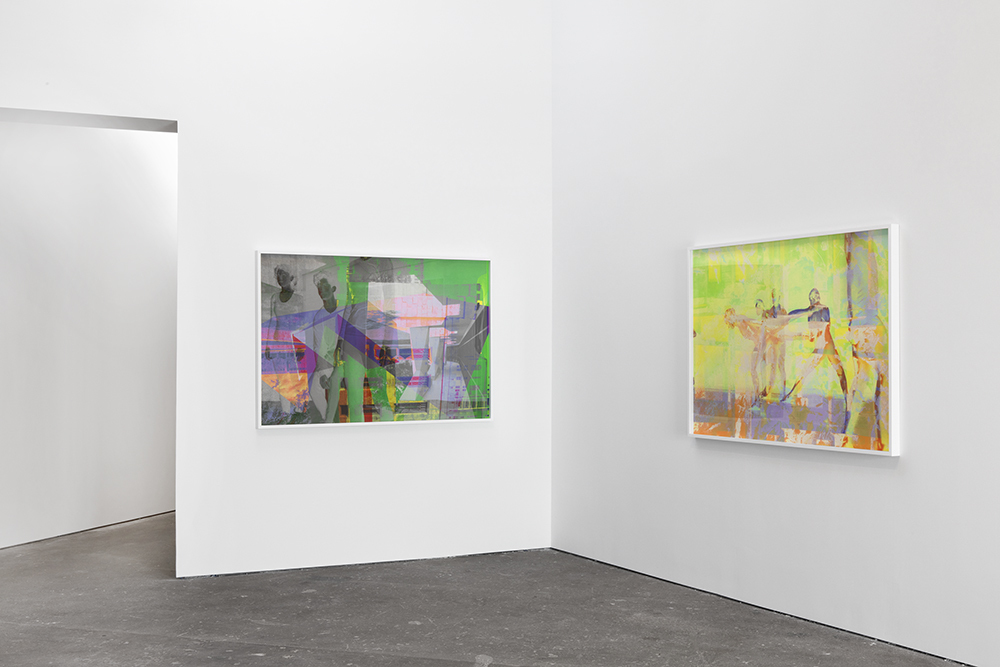 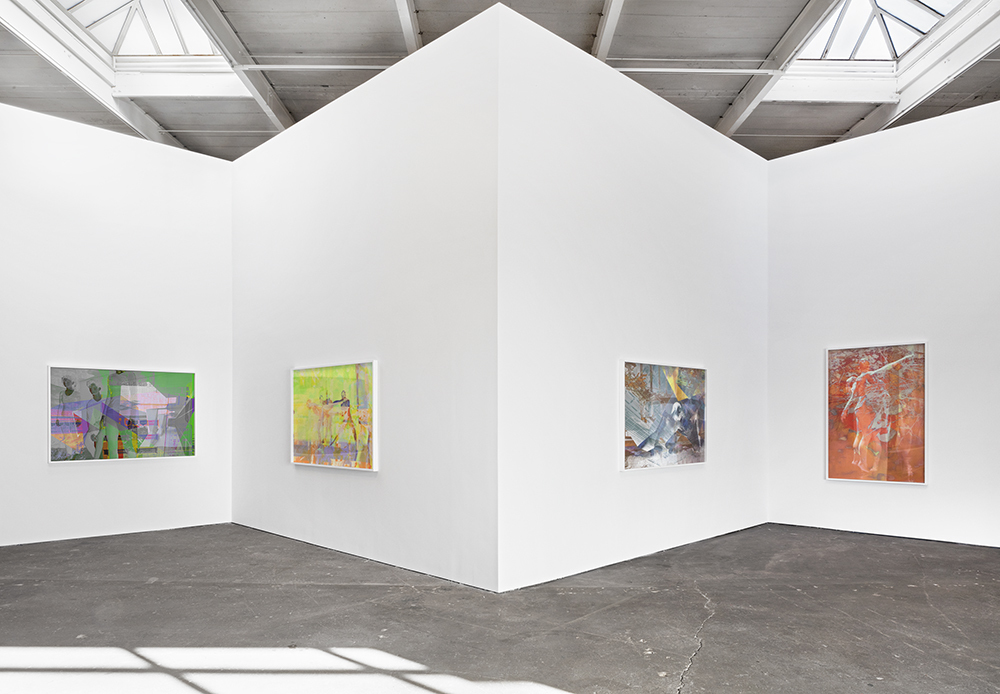 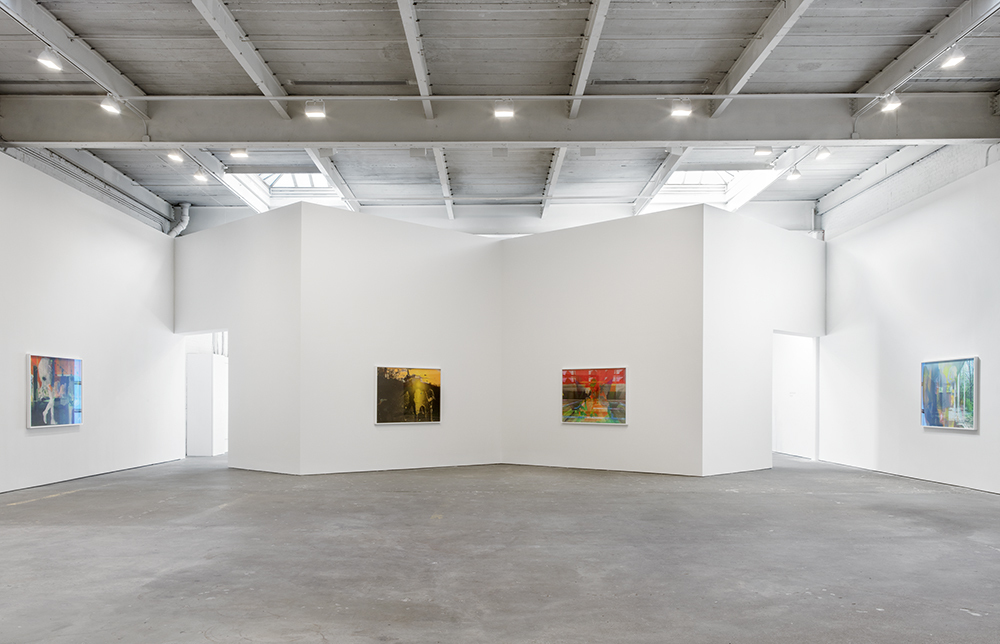 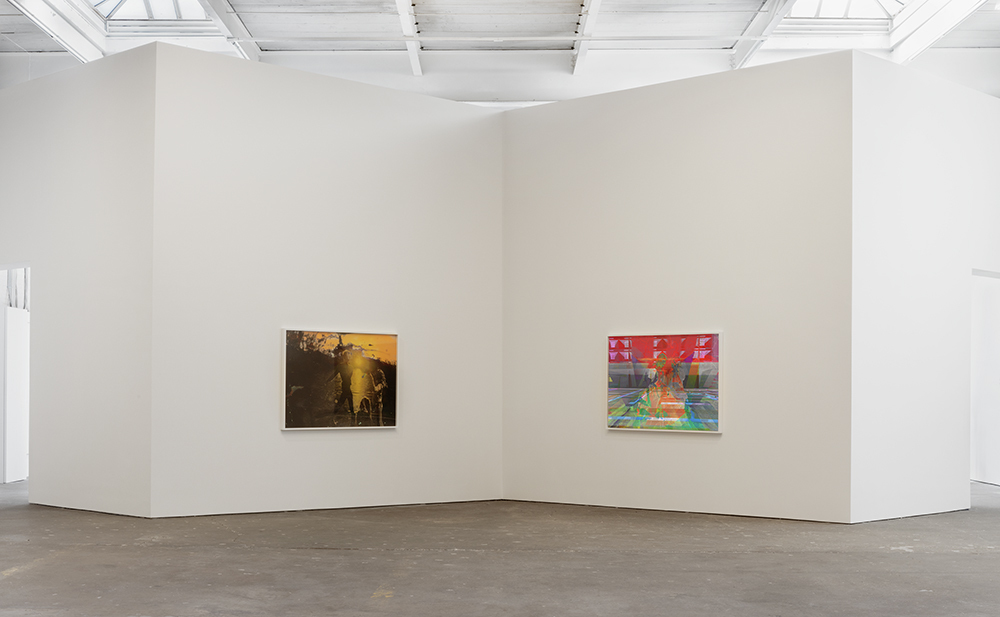 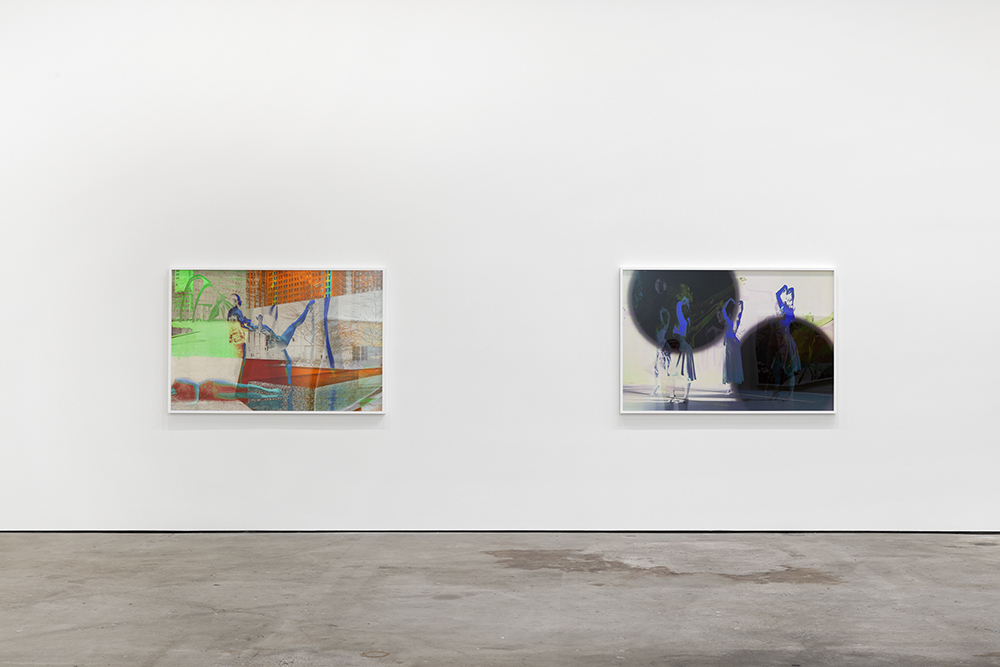 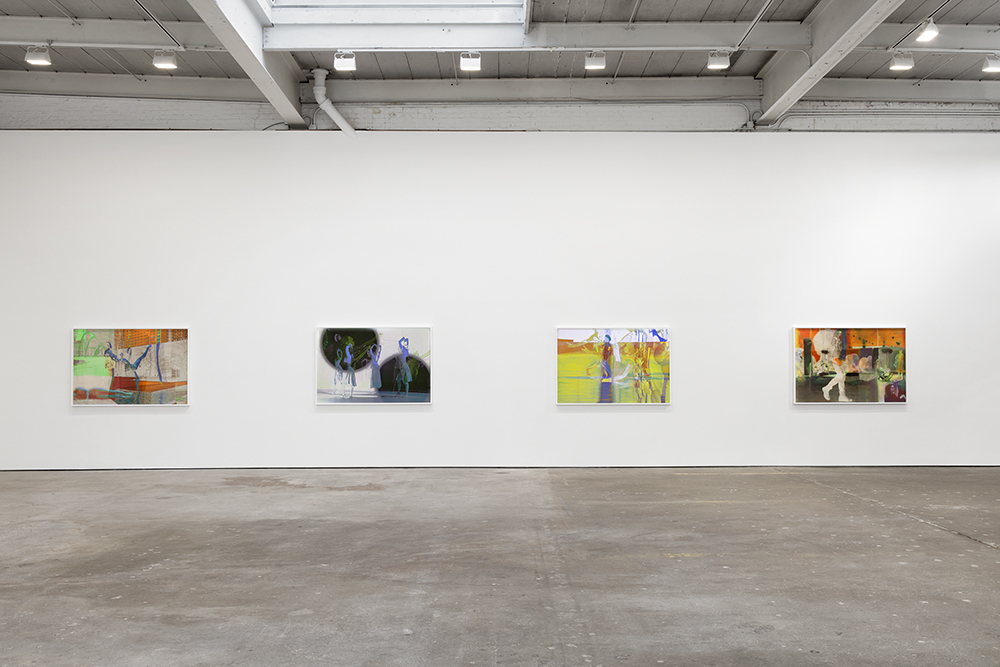 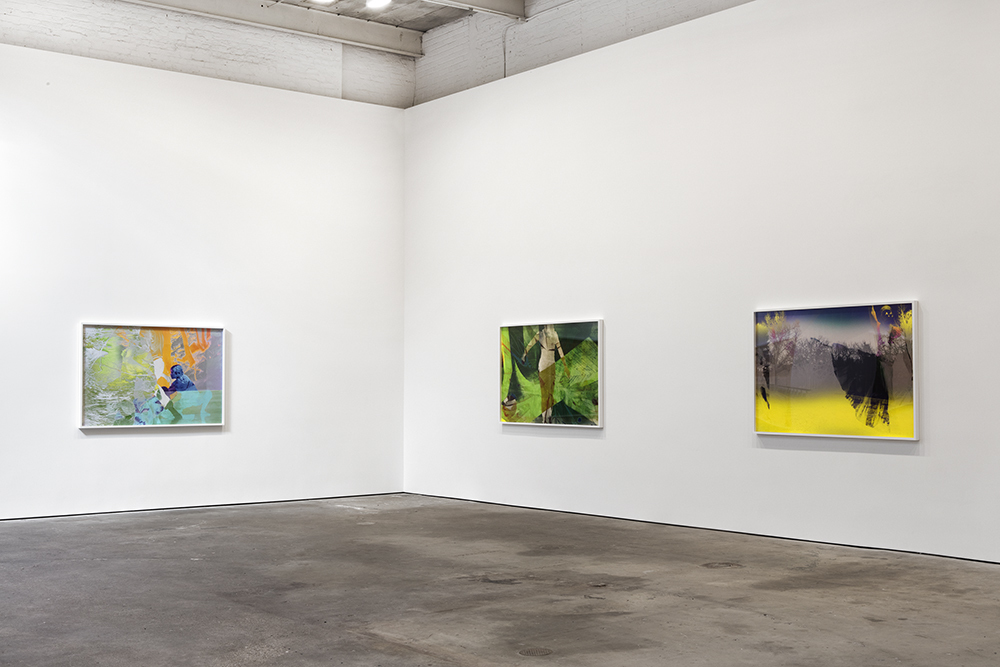 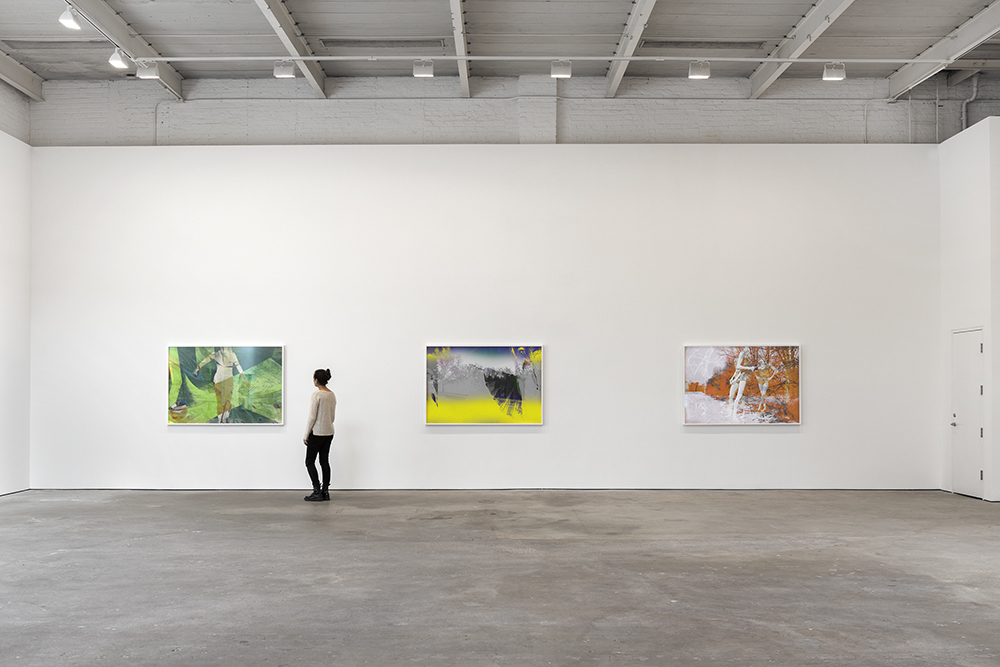 David Zwirner is pleased to present an exhibition of new works by James Welling, on view at 519 West 19th Street in New York. Choreograph debuts a series of digital photographs of dance, with elements of architecture and/or landscape. These were made by placing three different black-and-white photographs into Adobe Photoshop’s red, green, and blue color channels, thus yielding a multilayered color image similar to double exposures in analog photography. The artist then alters it using Photoshop tools (hue/saturation and selective color), and as adjustments are made, various parts of the image come forward or recede.

Welling’s interest in dance dates back to 1970 when he saw the Merce Cunningham Dance Company perform while at university in Pittsburgh. He took dance classes at the time, but after transferring to the California Institute of the Arts, he turned to photography as his medium. This exhibition marks his return to dance, albeit in photographic form.

For Choreograph, Welling photographed rehearsals of over a dozen dance companies in New York and Los Angeles, and superimposed these images with photographs of architecture and landscape. Architecture has been a long-standing interest of the artist’s (with earlier projects including Los Angeles Architecture and Portraits, 1976–1978; Architectural Photographs/Buildings by H. H. Richardson, 1988–1994; Light Sources, 1977–2005; Glass House, 2006–2010; and Maison de Verre, 2009), and for Choreograph, he photographed buildings by Marcel Breuer and Paul Rudolph, among others. The landscapes include a large open field in western Connecticut that Welling visited as a dance student, and locations in Florida, Maine, Switzerland, and Washington.

In an artist’s statement for Choreograph, Welling notes: “To my surprise the buildings and landscapes that I used often seem to function like theatrical stages for the dancers. The open fields I photographed also suggest a kind of ‘chora’—Greek for space and the root of choreograph. By choosing to use ‘choreograph,’ drawing with space, as a noun, I am noting its similarity to ‘photograph,’ drawing with light.”

Los Angeles-based architectural firm Johnston Marklee has created the exhibition design for the show by introducing a zigzag-shaped wall, which functions as a stage curtain.

James Welling was born in 1951 in Hartford, Connecticut. He studied at Carnegie Mellon University and the University of Pittsburgh and received his B.F.A. and M.F.A. from the California Institute of the Arts in Valencia, California. Since 2005, his work has been represented by David Zwirner. James Welling: Choreograph marks his sixth solo show at the gallery in New York.

Things Beyond Resemblance: James Welling Photographs at the Brandywine River Museum of Art in Chadds Ford, Pennsylvania, presents fifty works from Welling’s Wyeth project (through November 15). The museum also commissioned the artist to create eight site-specific installations, Gradients, which explore the intersection of photography and sculpture.

In 2014, the Art Institute of Chicago held an exhibition of the museum’s recent acquisition of Welling’s important early body of work, Diary of Elizabeth and James Dixon, 1840–41 / Connecticut Landscapes, 1977–86. In 2013, a major survey, James Welling: Monograph, was organized by the Cincinnati Art Museum in Ohio and accompanied by a catalogue published by Aperture. The exhibition traveled to the Hammer Museum in Los Angeles. Also in 2013, Fotomuseum Winterthur in Switzerland presented James Welling: Autograph, a selective overview of photographs and video works. In 2012, James Welling: The Mind on Fire at the MK Gallery in Milton Keynes, England, explored the origin and development of Welling’s abstract photographs from the 1980s. The show traveled to the Centro Galego de Arte Contemporánea in Santiago de Compostela, Spain and the Contemporary Art Gallery in Vancouver.

Welling’s work has been exhibited widely in the United States and internationally, including solo exhibitions at the University Museum of Contemporary Art, UMASS Amherst, Amherst, Massachusetts (2013); Wadsworth Atheneum Museum of Art, Hartford, Connecticut (2012); Minneapolis Institute of Arts, Minnesota (2010); Palais des Beaux-Arts, Brussels; Art Gallery of York University, Toronto (both 2002); Sprengel Museum Hannover (1999); Carnegie Museum of Art, Pittsburgh; and the Kunstmuseum Luzern, Lucerne, Switzerland (both 1998). In 2000, the Wexner Center for the Arts, Columbus, Ohio organized a major survey of his work, which traveled to the Museum of Contemporary Art, Los Angeles, and the Baltimore Museum of Art. In 1990, the artist’s first museum exhibition was presented by Kunsthalle Bern.

Work by the artist has been extensively included in international group exhibitions, including This Will Have Been: Art, Love & Politics in the 1980s, which was first hosted by the Museum of Contemporary Art Chicago in 2012. In 2011, the artist’s work was included in Jeff Wall: The Crooked Path, first presented at Palais des Beaux-Arts, Brussels; in 2009, Welling’s work was featured in the critically acclaimed historical survey The Pictures Generation, 1974–1984 at The Metropolitan Museum of Art, New York; and in 2008, he participated in the Whitney Biennial. In 2004, his work was presented in Os anos 80: Uma topologia/The 80s: A Topology at Museu Serralves, Porto, Portugal and Éblouissement at Jeu de Paume, Paris, and in 1992, his work was included in documenta IX.

In 2014, Welling was a recipient of the Infinity Award given by the International Center of Photography, New York. In 2016, he will receive the Julius Shulman Institute Excellence in Photography Award from Woodbury University, California. Since 1995, he has been Area Head of Photography at UCLA and this fall he is a Visiting Professor of Photography at Princeton University.