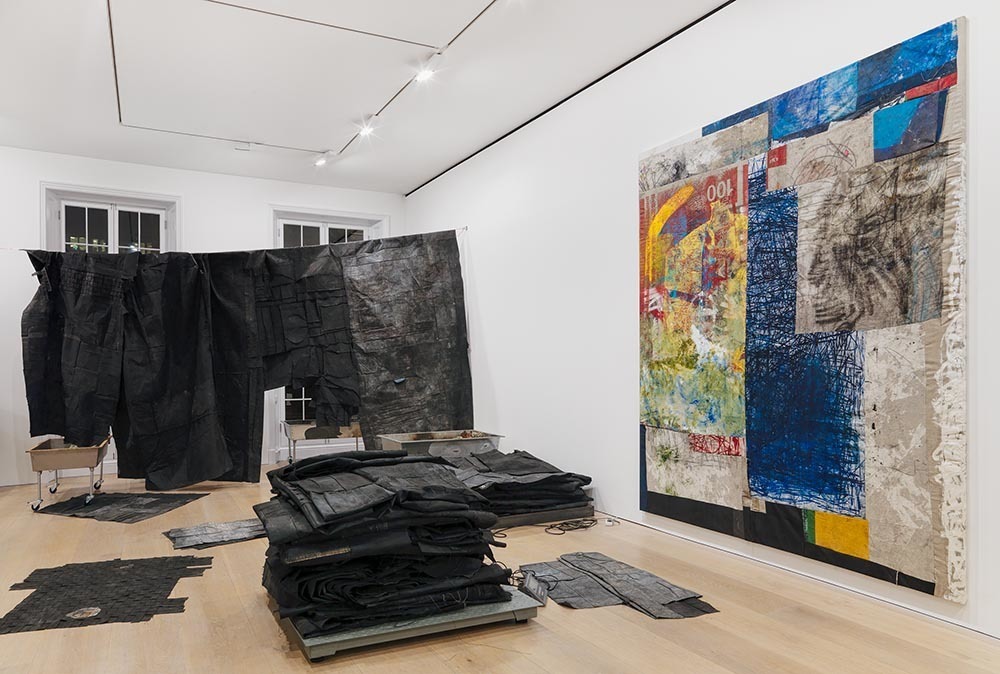 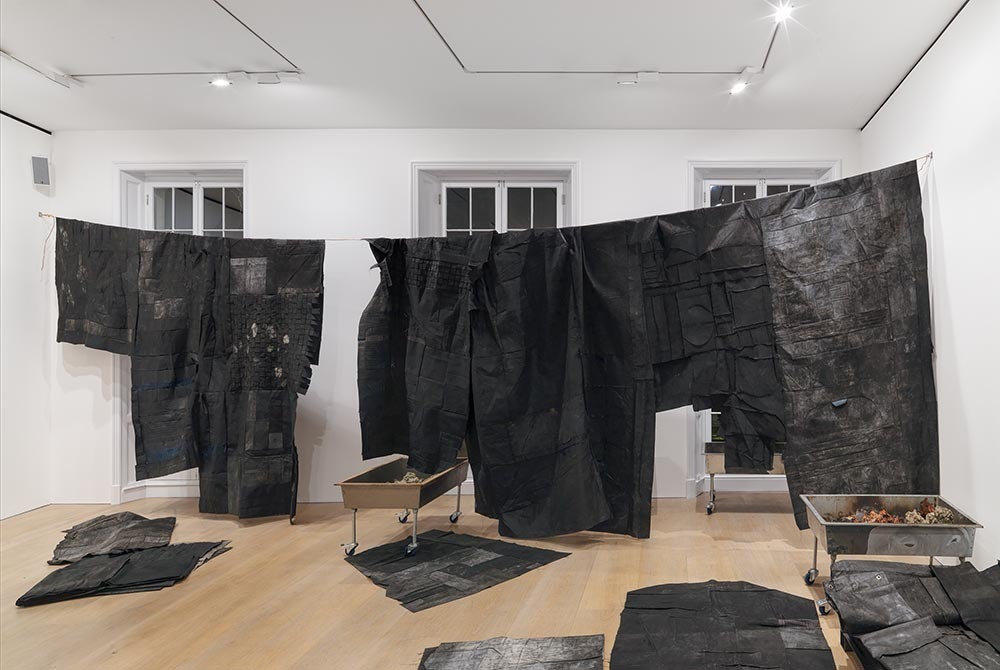 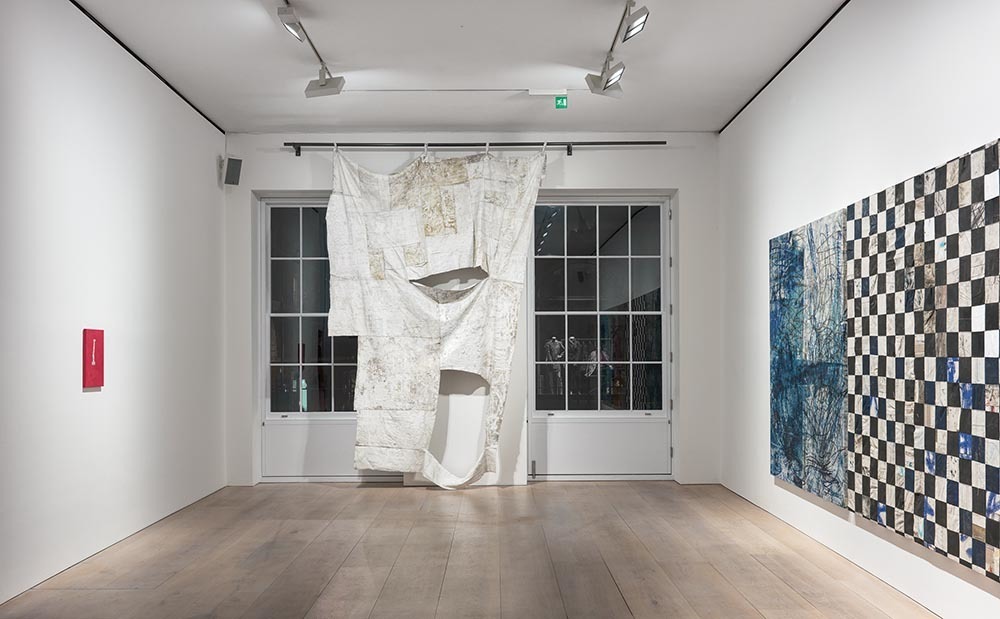 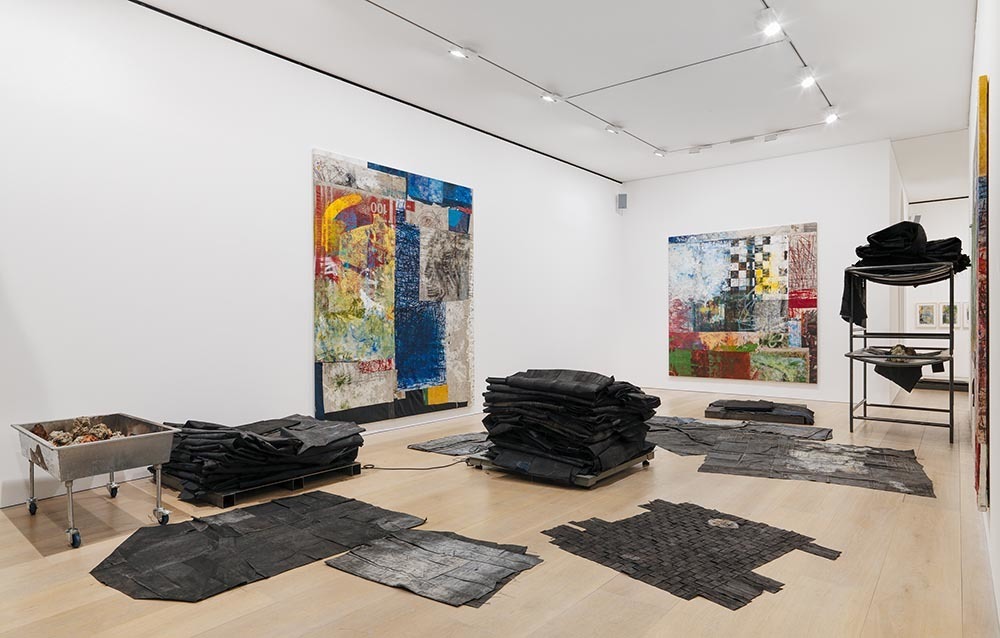 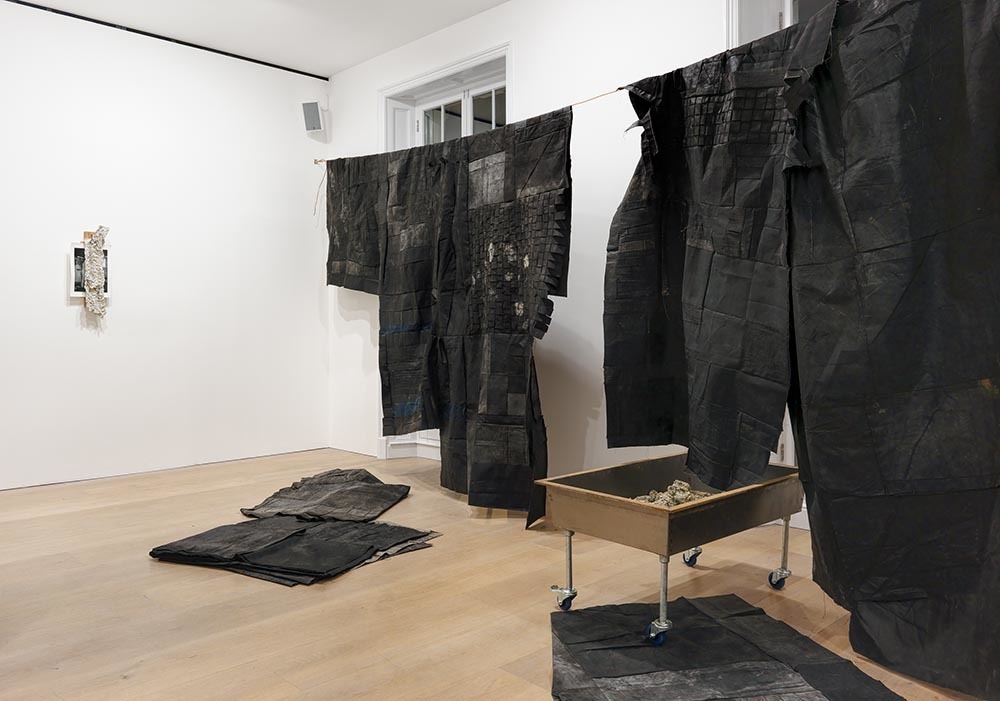 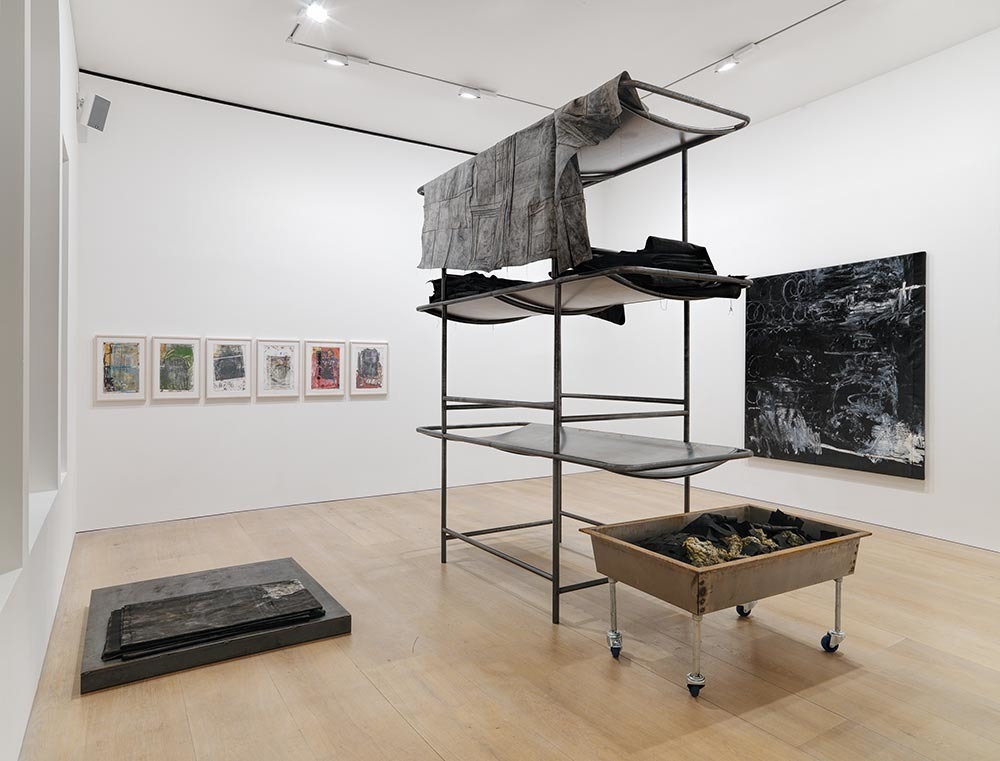 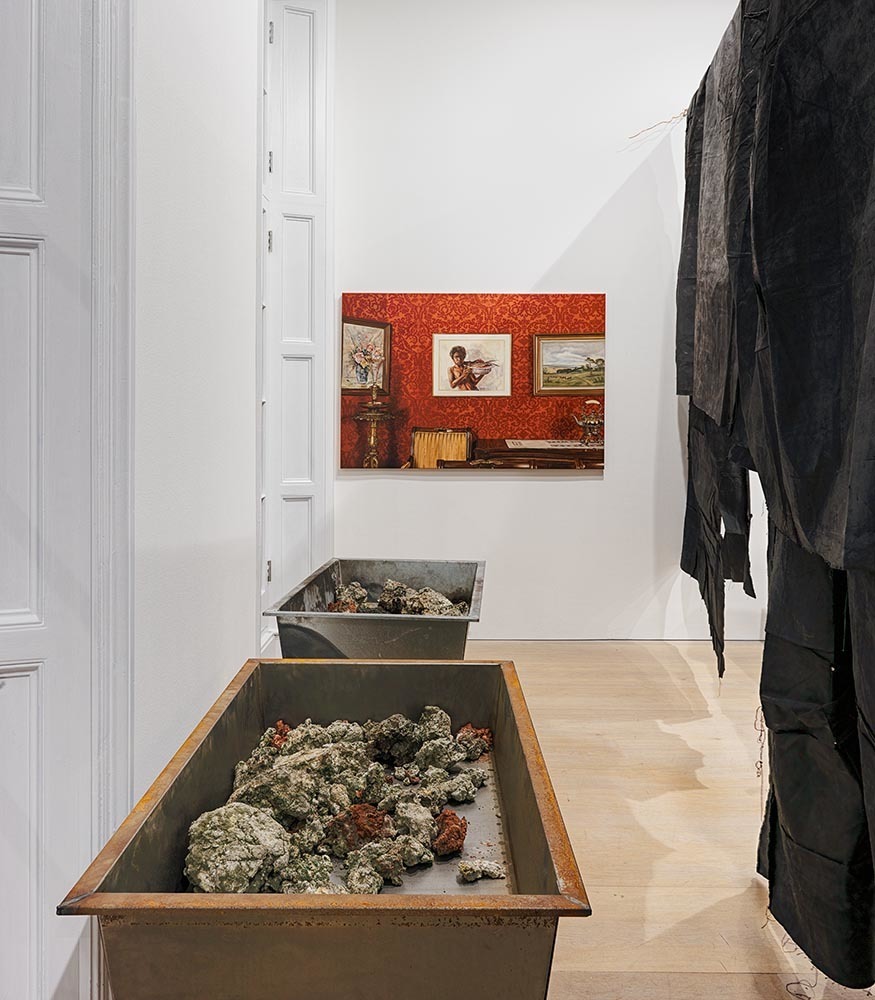 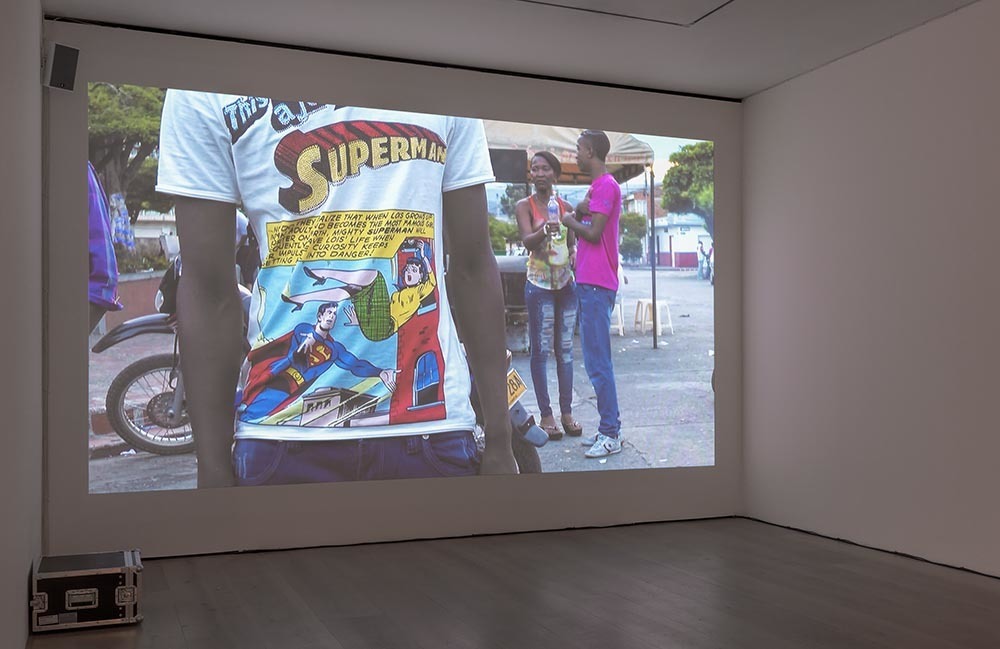 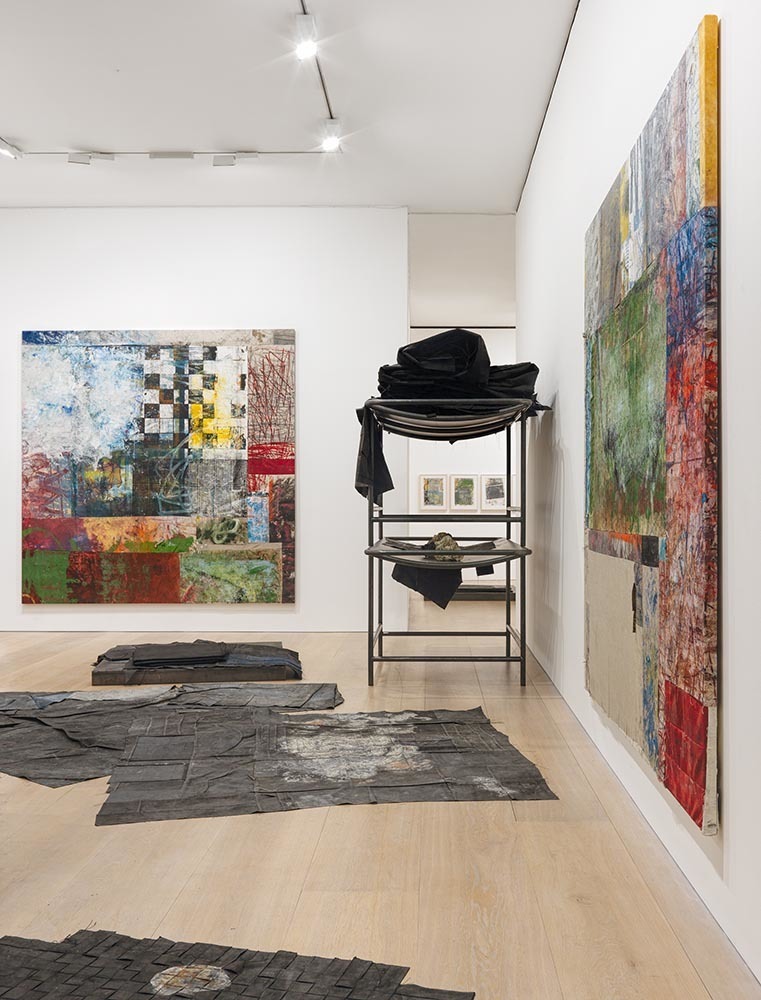 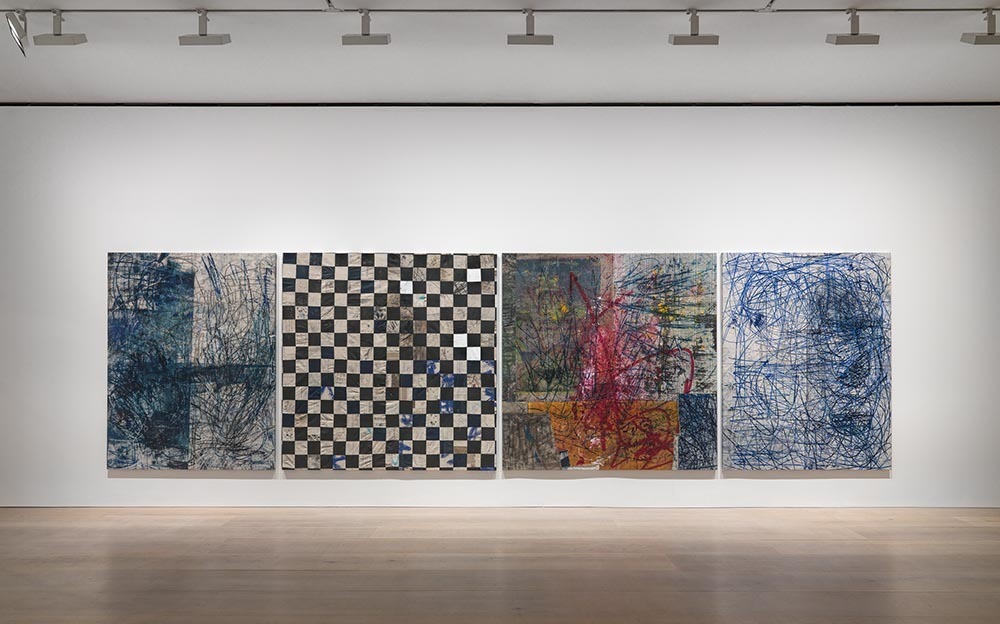 David Zwirner is pleased to present Oscar Murillo’s first exhibition at the gallery in London, which includes new paintings and drawings as well as sculptural, sound, and film elements.

The exhibition’s title, binary function, refers to the pairings that permeate Murillo’s multifaceted practice. For the artist, the notion of the binary is not oppositional; instead, these pairings work and play against one another to create a dialogue that exceeds individual works.

binary function continues this thread of Murillo’s practice, in which conceptual dialogues manifest themselves through the artist’s engagement with materials. The exhibition includes a new video projection that depicts a street scene in Murillo’s hometown of La Paila, Colombia, in which people are seen chatting, drinking, and dancing to live music. Filmed by the artist on New Year’s Day, its footage shifts between documentary and experimental styles, using both wide-angle and detail shots that, at times, abstract the figures’ bodies into a chaotic arrangement of imagery, color, and movement. Murillo employs sound as a major, integral component of the work: its soundtrack fades between the original audio and a commissioned score, interweaving loud, jarring street noise with tempered bell-like harmonies. The audio will be played throughout the exhibition space, creating an architecture of sound whose ambience acts as a transition between the depicted scene and the exhibition at large, and complements the physicality of the adjoining installations.

The large-scale, seemingly frenetic paintings, for which Murillo has become widely known, develop gradually and often incorporate materials that change and react over time, with canvases literally moved around his studio to accumulate sole imprints, fingerprints, and dust. Just as the material conditions of the studio in this way become inseparable from the finished artwork, Murillo invites viewers to approach their physical engagement with the gallery space as part of the viewing process. As such, they become implicated within the dual process of production and consumption.

The exhibition continues a recent development within Murillo’s practice in which multimedia works are grouped together within clear plastic tray frames. Comprising wide-ranging imagery and materials, including small-scale drawings, screen prints, and the artist’s own travel photographs, these compositions vary in their degree of engagement with the processes of painting, drawing, screen printing, and installation. They can thus be seen as visual primers for the works in the show as well as Murillo’s own creative process; the artist regularly refers to his paintings in terms of drawing, and his studio practice at large integrates various forms of printmaking.

Material alignment, a new body of black-and-white grid paintings, can likewise be seen to present a visual analogy of the artist’s working methods with their oscillation between labour-intensive production and spontaneous improvisation. Individual squares, seemingly containing traces of larger compositions, are carefully stitched together, creating a tension between order and chaos that finds a physical component in the optical sensations triggered by the grid.

A major new installation in the upper galleries comprises large, heavily painted black canvases (made of several sewn-together fragments and reminiscent of leather hides) suspended across the gallery, piled on top of one another on steel pallets, and also strewn across tables. An adjacent canvas, one of a series of new figurative works in the exhibition, depicts a painting Murillo encountered in a collector’s home in Bogotá—showing a young boy selling fish—against Regency-style wallpaper and antique furniture. Murillo’s physical engagement with his materials has an anthropomorphic effect, which in turn contextualises the installation within the socio-political landscape of post-colonial Colombia. Intensified by the subtle smell of oil paint and the presence of decomposing corn sculptures, its corporeal and abject nature creates a thought-provoking viewing experience that aims to destabilise the codified conditions of display present within the initial painting.

Oscar Murillo was born in 1986 in La Paila, Colombia. He lives and works in London, where he earned his B.F.A. in 2007 from the University of Westminster, followed by his M.F.A. in 2012 from the Royal College of Art. In 2013, the artist joined David Zwirner. His first gallery solo exhibition, titled A Mercantile Novel, was presented at David Zwirner, New York in 2014.

In November 2015, Murillo will present newly commissioned work for Performa 15 in New York. Entitled Lucky dip, a series of performances and installations will take place over the course of one week at the Alexander Hamilton U.S. Custom House, an important historical site in downtown Manhattan. An upcoming solo exhibition is planned for the spring of 2016 at the Yarat Contemporary Art Centre in Baku, Azerbaijan.

Murillo’s works and projects have been the subject of solo exhibitions at prominent institutions worldwide. Most recently, presentations were held in 2015 at the Museo de Arte de la Universidad Nacional de Colombia, Bogotá; Centro Cultural Daoíz y Velarde, Madrid (part of ArcoColombia 2015); and Artpace, San Antonio, Texas. In 2014, Oscar Murillo: An average work rate with a failed goal showcased new paintings, sculptures, and video works at 40mcube in Rennes, France, organised as part of the 4th Les Ateliers de Rennes – Biennale d’art contemporain. Also in 2014 a body of new work was presented at The Mistake Room in Los Angeles on the occasion of the venue’s inaugural exhibition. In 2013, the South London Gallery hosted the artist’s first major solo show in the United Kingdom. In 2012, he created new paintings on site during a five-week summer residency at the Rubell Family Collection in Miami, which were shown later that year marking his first solo exhibition in the United States. Other venues that have exhibited his works and projects include the Showroom MAMA, Rotterdam (2013) and the Serpentine Gallery, London (2012).

For Murillo’s ongoing long-term project Frequencies, created in collaboration with members of his family and political scientist Clara Dublanc, canvases are temporarily affixed to classroom desks in selected schools across the globe, encouraging students aged ten to sixteen to create any kind of mark making—drawing, writing, doodling. He recently debuted the Frequencies project with a large-scale installation of canvases as part of the 56th Venice Biennale: All the World’s Futures, currently on view through 22 November 2015. In conjunction, David Zwirner Books will publish a comprehensive book, standing as a directory of the project to date, which includes reproductions of canvases and photographs of schools and students.