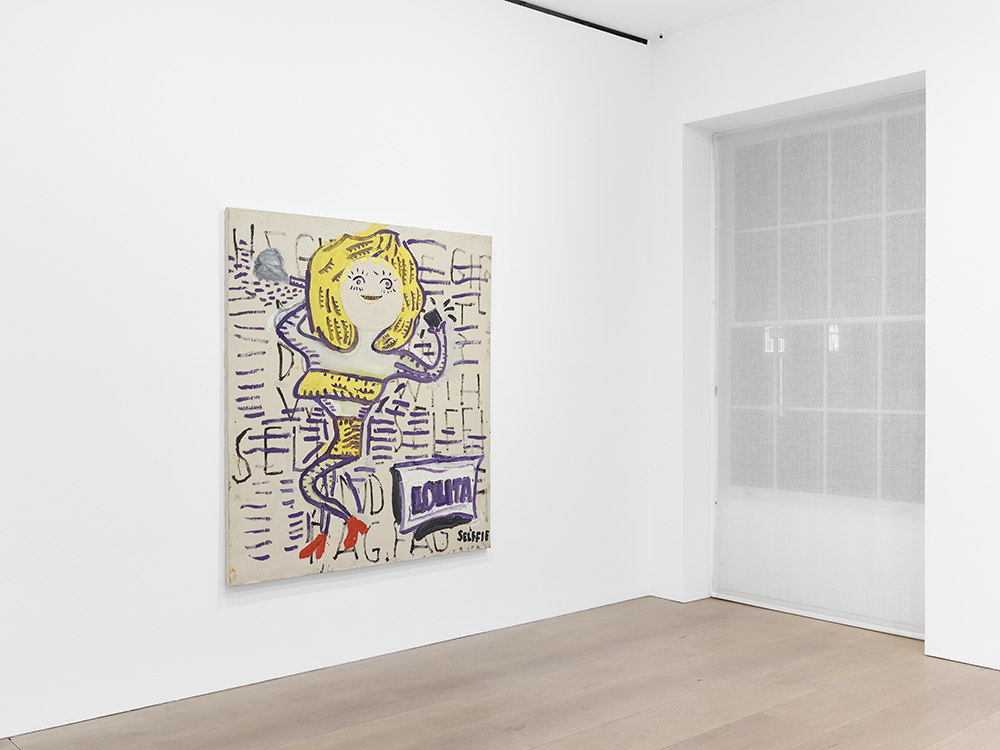 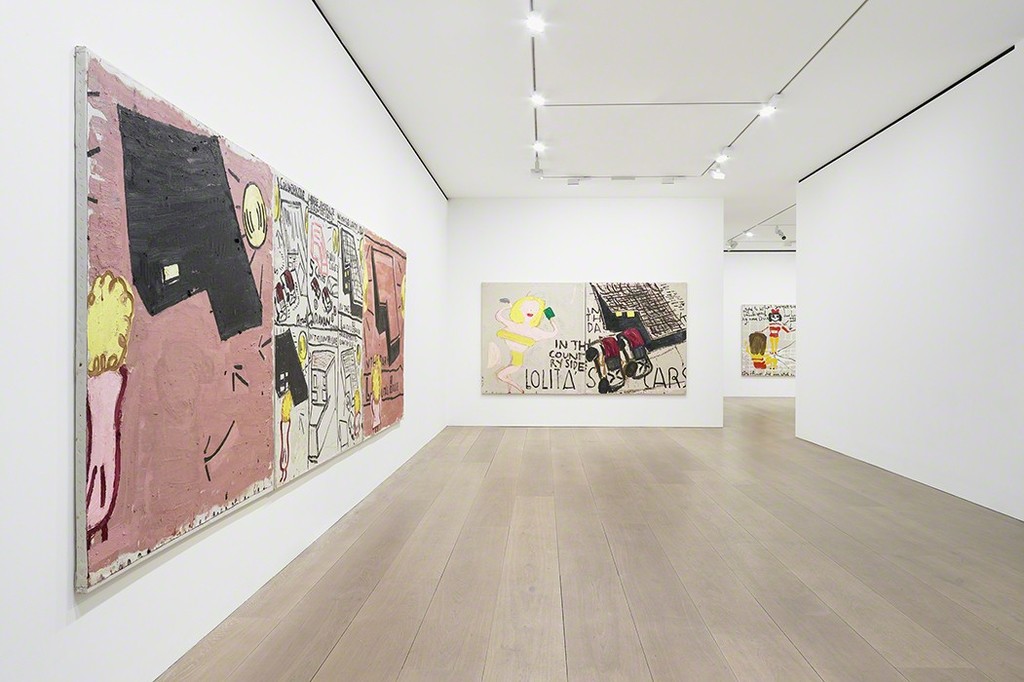 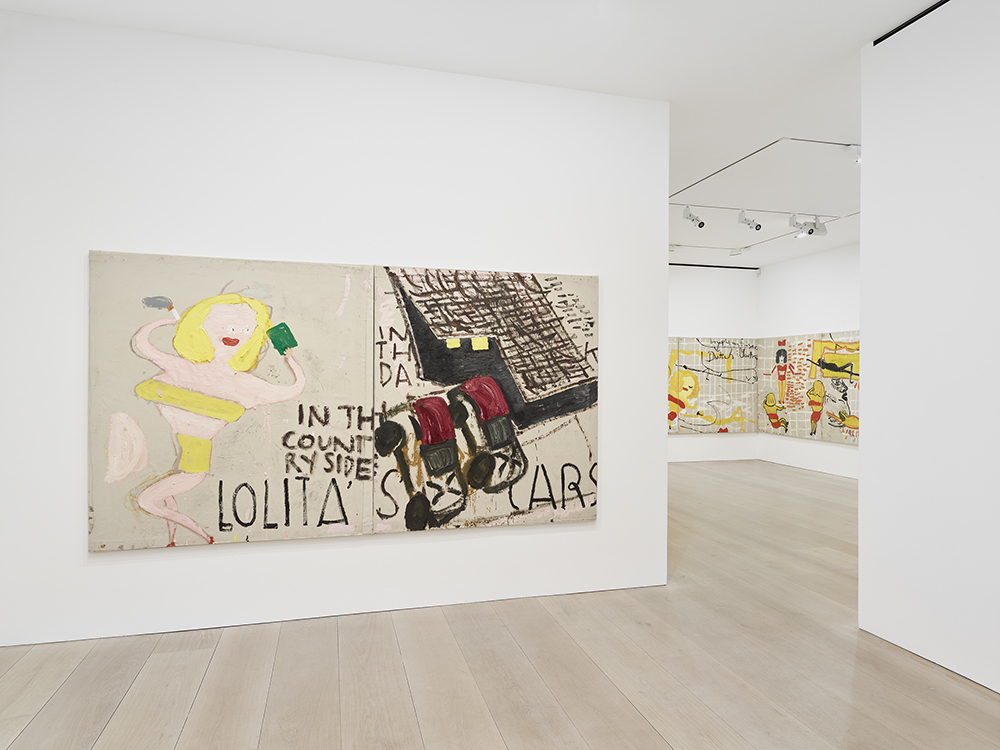 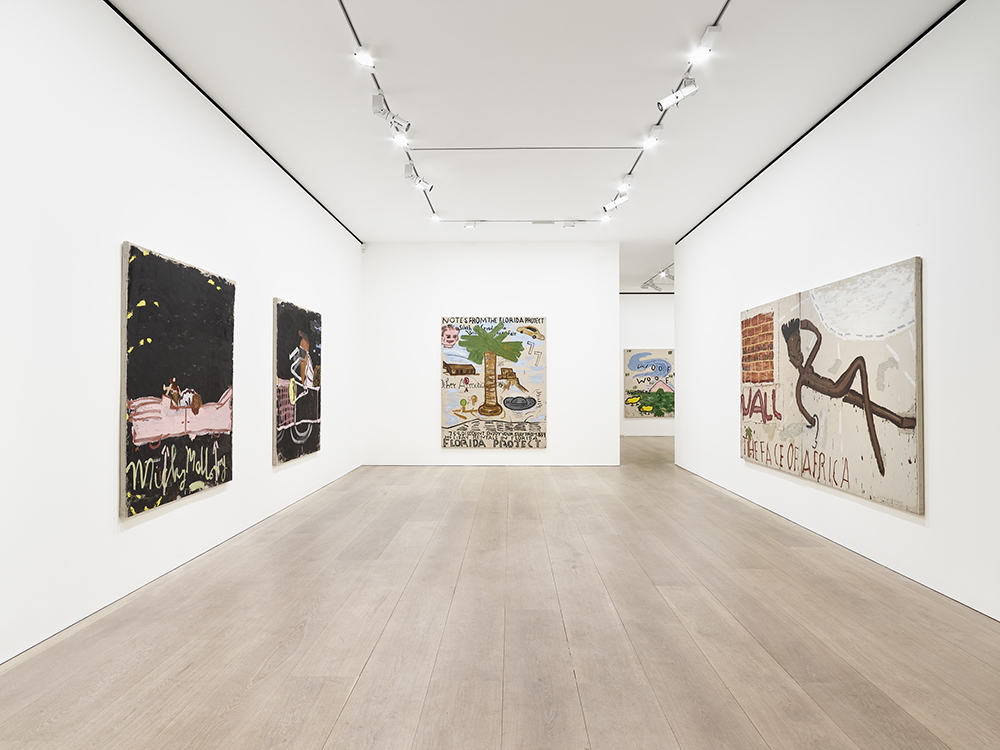 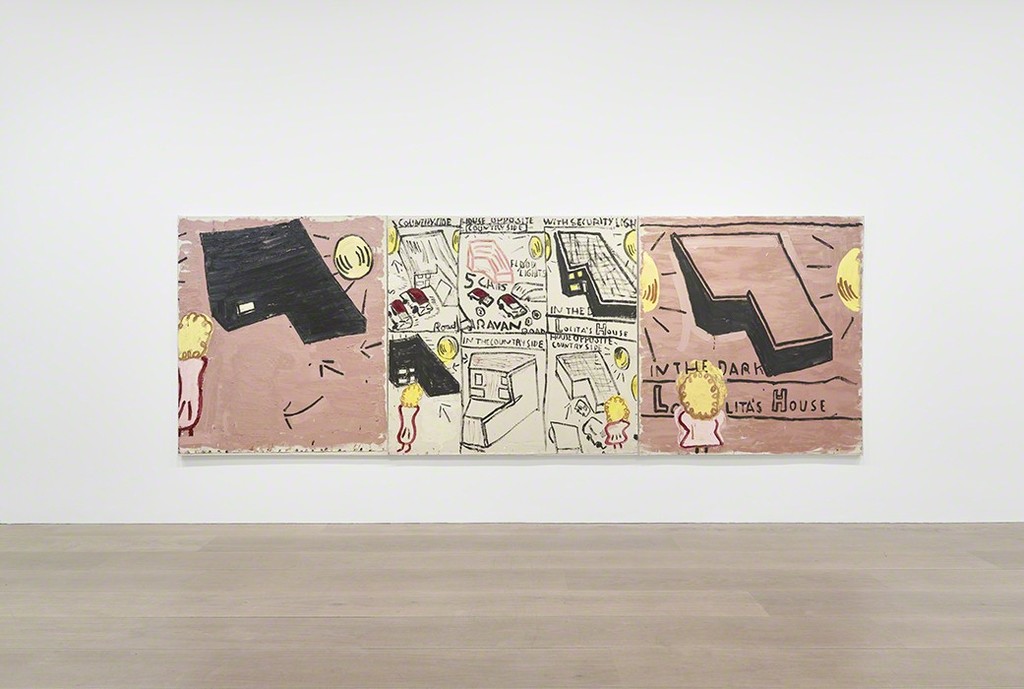 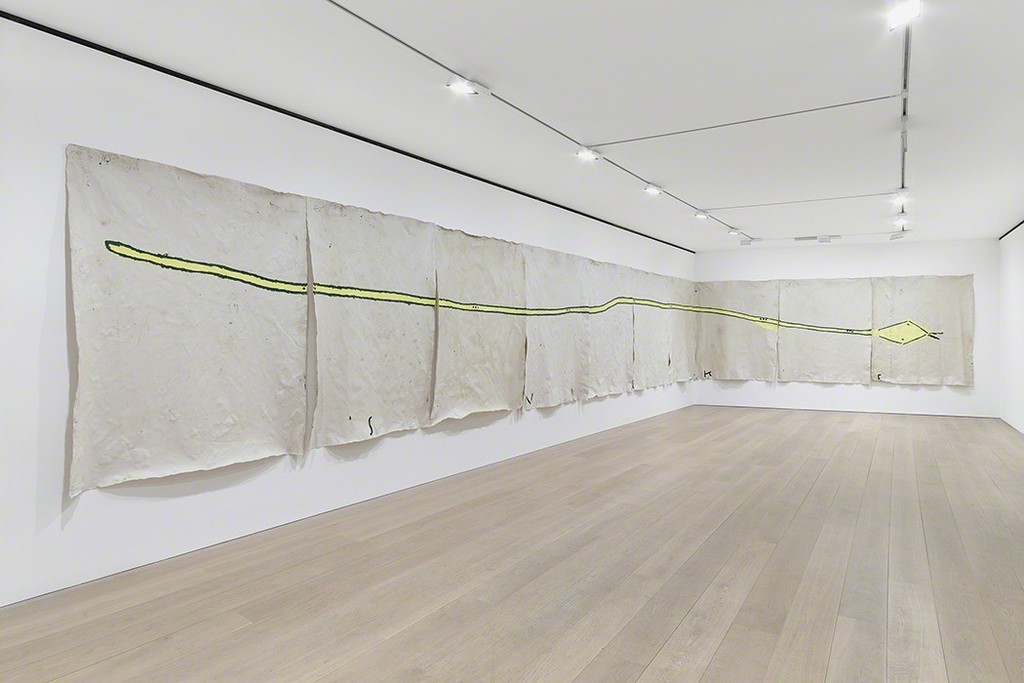 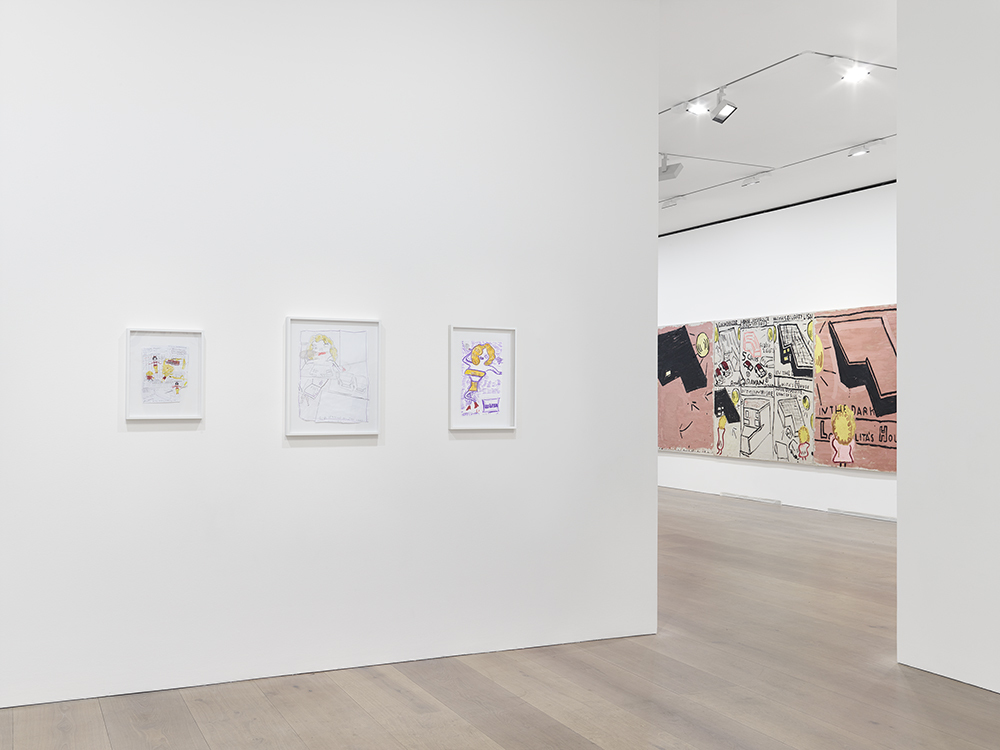 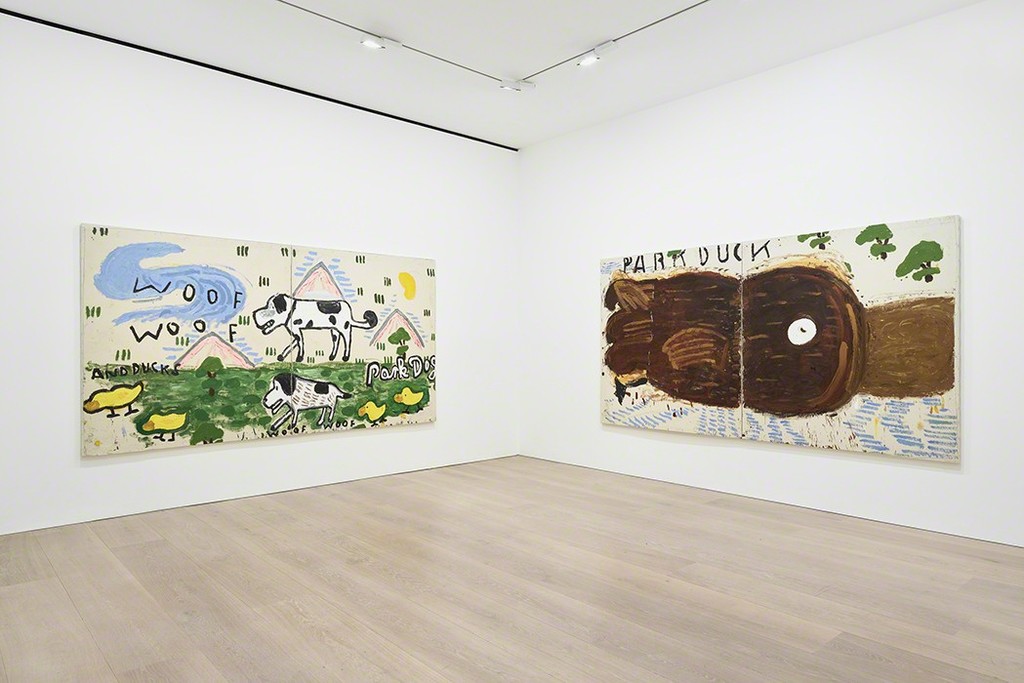 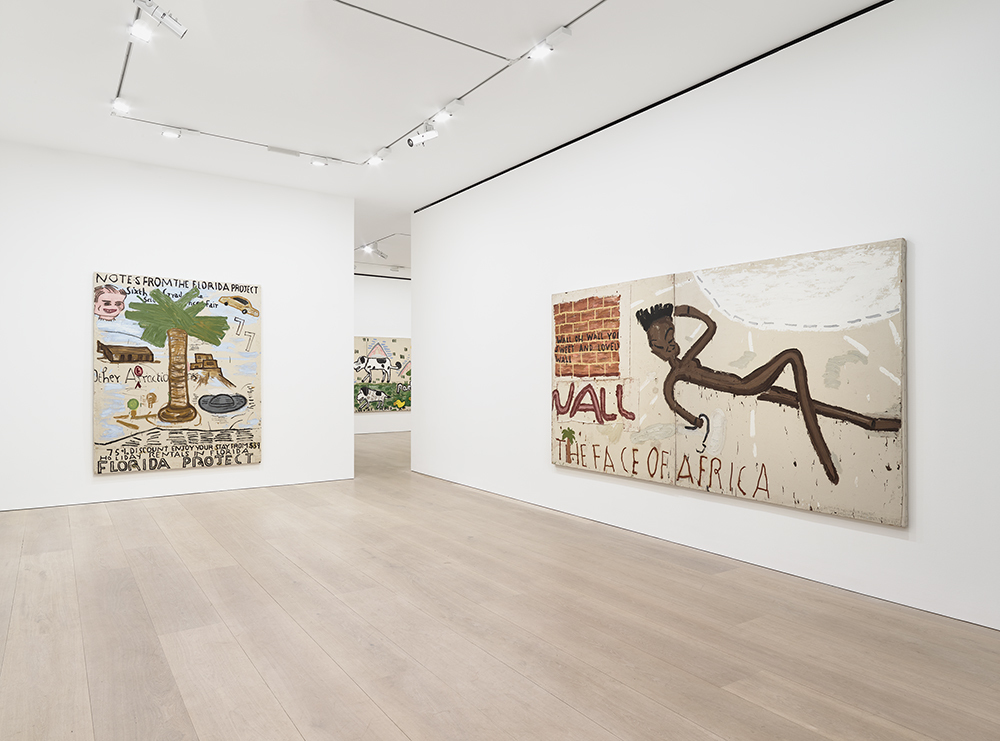 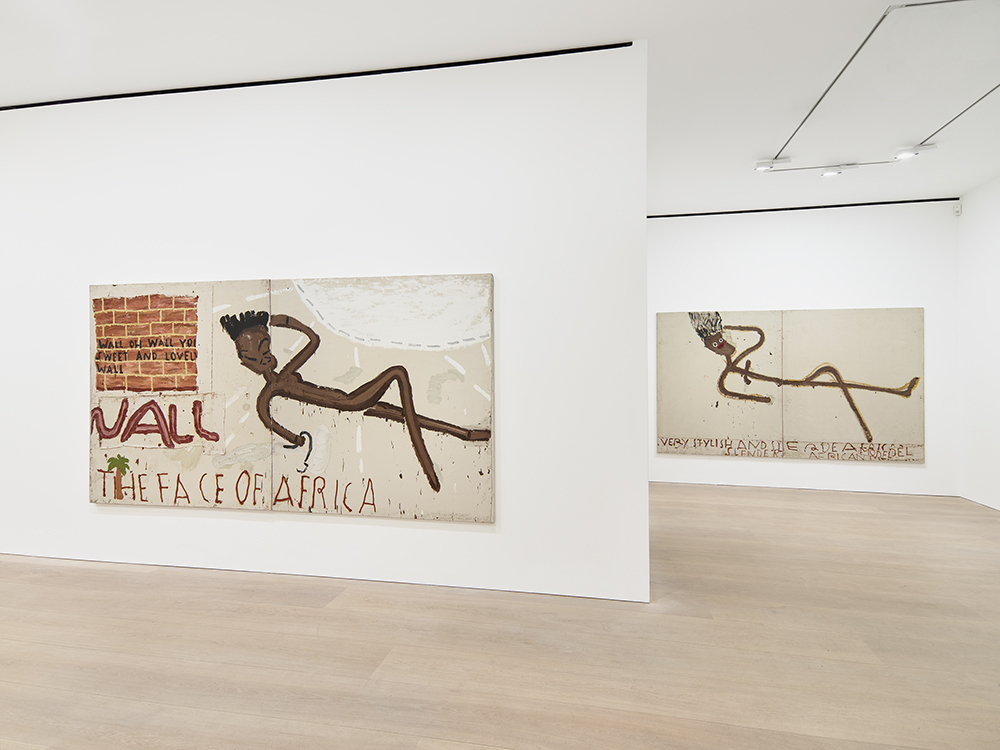 David Zwirner is pleased to present an exhibition of new paintings and works on paper by British artist Rose Wylie spanning three floors of the gallery’s London location.

Loosely referencing a house that was constructed in the 1970s in the prevalent style of the period across the street from Wylie’s residence in Kent, and the neighbor’s teenage daughter who would often wash their car in the driveway, Lolita’s House continues the artist’s ongoing fascination with the shifting nature of memory and the wide-ranging external associations that become attached to it over time.

Wylie creates paintings and drawings that at first glance appear aesthetically simplistic, not seeming to align with any recognizable style or movement, but on closer inspection are revealed to be wittily observed and subtly sophisticated mediations on the nature of visual representation itself. The layers of newspapers that line her studio floor are a frequent source of material for the artist, as she encounters images by chance while working. Drawing from such wide-ranging cultural areas as film, fashion photography, literature, mythology, news images, sports, and individuals she meets in her day-to-day life, Wylie paints colorful and exuberant compositions that are uniquely recognizable. Her works make use of an idiosyncratic visual lexicon, the directness of cartoonish figures, and a flattened perspective, but simultaneously betray a deep awareness of art history and painterly conventions.

In the works on view, Wylie, who still lives and works in the same residence she has occupied for many years, revisits her impressions of that particular time and place several decades on. Her associative reconstructions meld fact and fiction, thus drawing her lived experience into dialogue with a web of external points of reference. As the artist notes, "The image became more potent through the multilayered exploration of how it looked; but any literary association with Nabokov’s Lolita was slight, since it was only her age and frequent visibility paraded through ‘dress’ and ‘on-view performance,’ which gave her the invented name."

In the monumentally scaled triptych Lolita’s House, Plaster Pink (2018), the artist uses a number of visual devices to draw the viewer’s eye across the canvas while also mimicking the way in which memory evolves over time. At more than five meters (seventeen feet) wide, the work reveals the process of its own construction: the two outer panels each feature a single rendering of the angular house bathed in a warm pink wash of color with "Lolita" standing in front of it. By contrast, the central panel is divided into six sections set against a white backdrop that is reminiscent of the layout of film stills or a storyboard. Each repeats the same scene and is annotated with a brief caption and diagrammatic markings, but variations appear as the artist moves between a wide and focused view of the house, sometimes presenting both at once, thus combining differing eastern and western perspectival orthodoxies. Wylie uses visual rhymes—Lolita’s vibrant halo of hair is mirrored in the circular floodlights that punctuate the composition at varying points, depicted using the same unnatural shade of yellow—as well as the transformation of the form of the house as a means of both reinforcing and abstracting the work’s relationship to an initial reality. Similarly, the artist employs repeated language as a means of detachment—in particular the word "countryside" recurs across the composition in a nod to the well-known joke by British comedian Stewart Lee in which he uses the word so many times that it becomes special and memorable, yet at the same time, through repetition, it is rendered nearly meaningless. Wylie also deploys language in the same manner in Lolita and Selffie (2018), in which she imagines this character transposed to modern day—snapping a picture of herself with a phone and literally surrounded by a melee of incoherent letters from which the word "selfie" appears.

Another multipanel painting Yellow Girls I (2017) underscores the centrality of drawing within Wylie’s practice. Once she has selected an image or a topic, she typically makes numerous drawings on that theme as a kind of mnemonic exercise from which her paintings eventually emerge—a number of these related works on paper will be on view in this exhibition. In this painting, Wylie has transposed part of a drawing from her diary, including the crosshatchings of the notebook paper, onto the canvas. In this new context, the gridded structure acts as a kind of lattice onto which several versions of her Lolita are worked out.

Alongside this body of work, the exhibition will also include Wylie's largest painting to-date—a ten-panel snake that wraps around the Upper Room at the gallery, spanning approximately fifteen meters (nearly fifty feet). Emblematic of Wylie's tendency to work across multiple canvases, this work elaborates on her series of large-scale monochromatic paintings that utilized the forms of animals to explore the conventions of painterly abstraction. In addition, a group of paintings related to the artist’s ongoing Film Notes series, in which she paints scenes from movies as filtered through her memory, will be presented. Here, she revisits her impressions of Natural Born Killers and The Florida Project.

The exhibition will be accompanied by a limited-edition artist’s zine, published by David Zwirner Books.

Rose Wylie (b. 1934) studied at Folkestone and Dover School of Art, Kent, and the Royal College of Art, London, from which she graduated in 1981. Her work has been the subject of renewed critical attention in recent years, including solo presentations at the Rosenwald-Wolf Gallery, The University of the Arts, Philadelphia (2012); Jerwood Gallery, Hastings, England (2012); Tate Britain, London (2013); Haugar Vestfold Kunstmuseum, Tønsberg, Norway (2013); Städtische Galerie Wolfsburg, Germany (2014); Douglas Hyde Gallery, Dublin (2015); Space K, Seoul (2016); Chapter, Cardiff (2016); and Turner Contemporary, Margate (2016). In 2014, she won the John Moores Painting Prize, presented by the Walker Art Gallery, Liverpool; and in 2015, a painting by Wylie was included in London’s Royal Academy of Arts Summer Exhibition, for which she won the Charles Wollaston Award. The same year she was also elected a Senior Royal Academician.

In 2017, the Serpentine Sackler Gallery, London, presented a major solo exhibition of Wylie’s work, which was accompanied by a catalogue featuring texts by Melissa Blanchflower and Barry Schwabsky, in addition to artists Alvaro Barrington, Tal R, and Lynette Yiadom-Boakye. In March 2018, the multivenue exhibition History Painting opened at Plymouth Arts Centre and The Gallery at Plymouth College of Art, England, where it is on view through May 30, 2018; the exhibition will travel to Newlyn Art Gallery & The Exchange in Cornwall, England, in June 2018. Centro de Arte Contemporáneo de Málaga will also present a survey of Wylie’s work, opening in May 2018.

The artist’s first exhibition at David Zwirner, London, Horse, Bird, Cat, was held in 2016, and her work has been represented by the gallery since 2017. Lolita’s House is her second solo presentation at the London gallery.