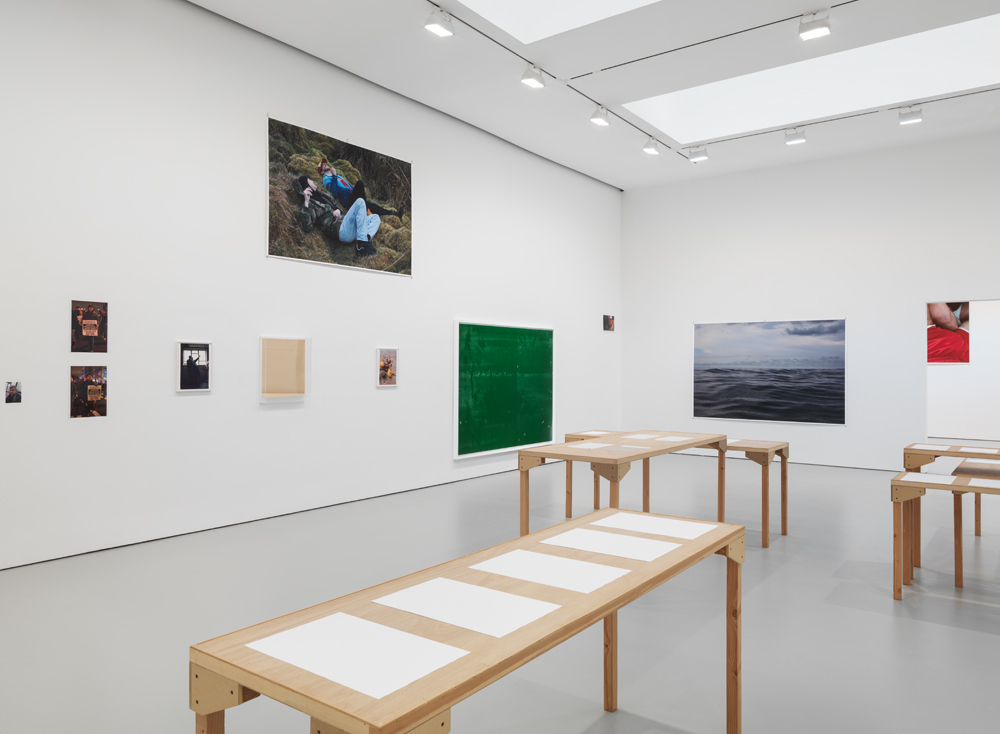 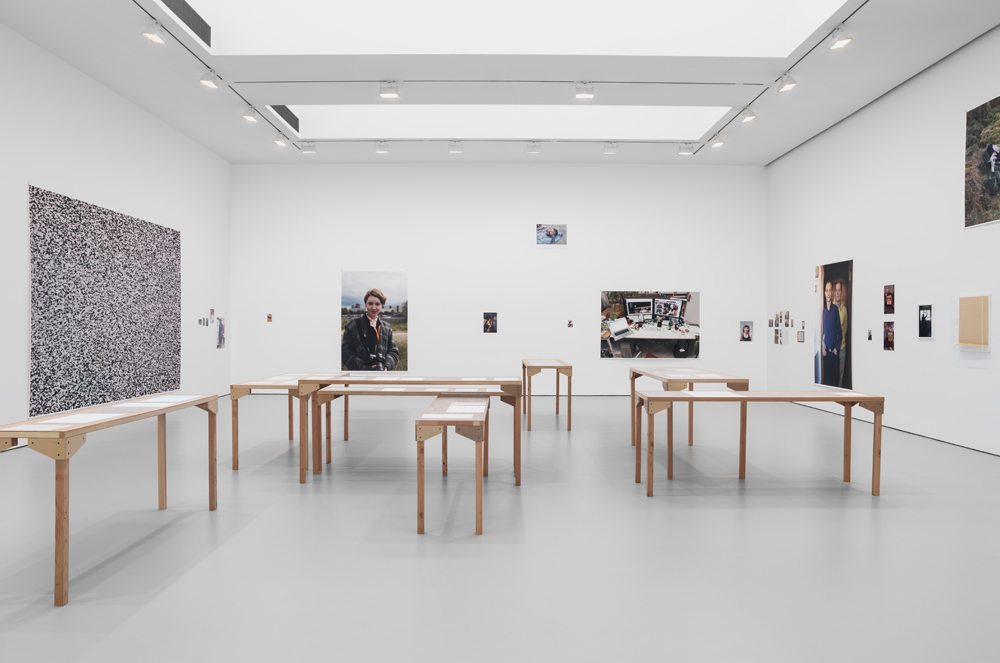 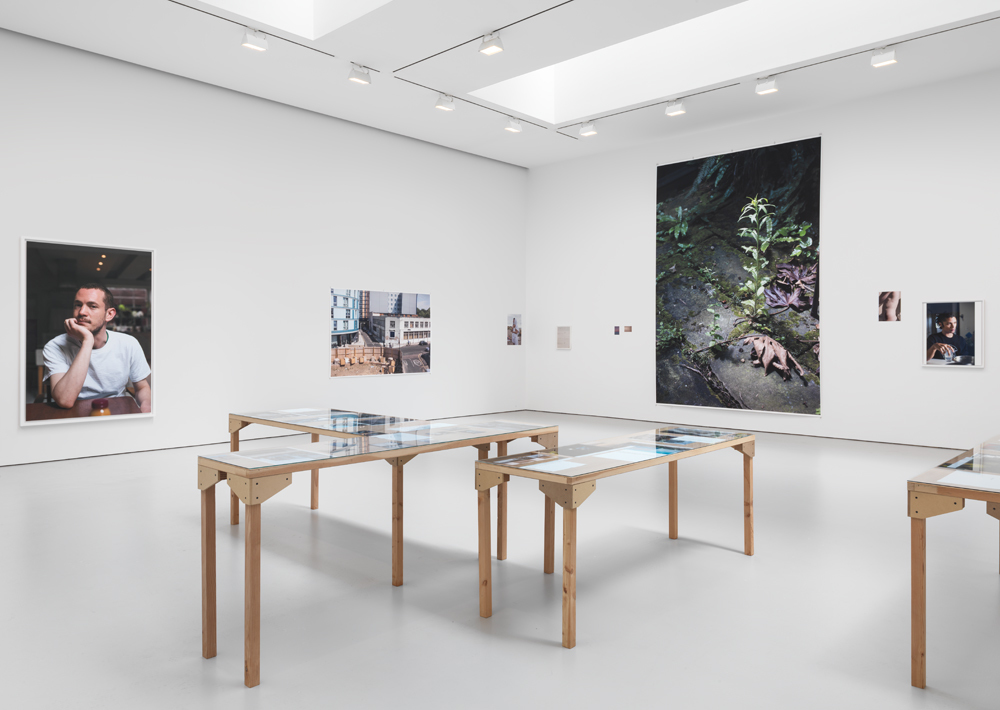 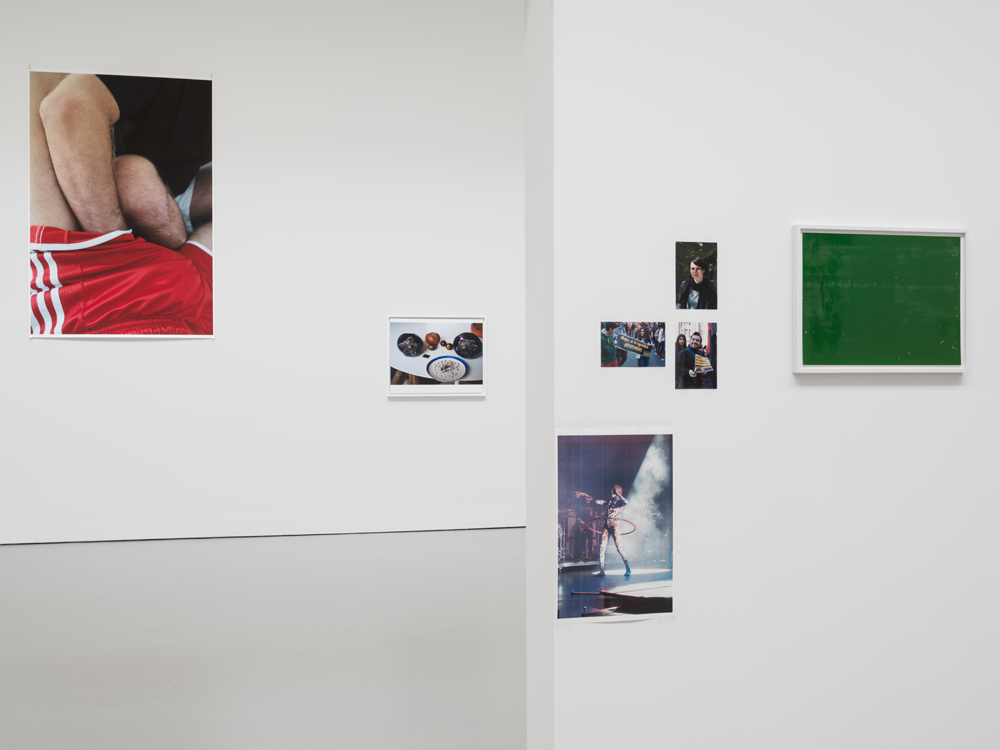 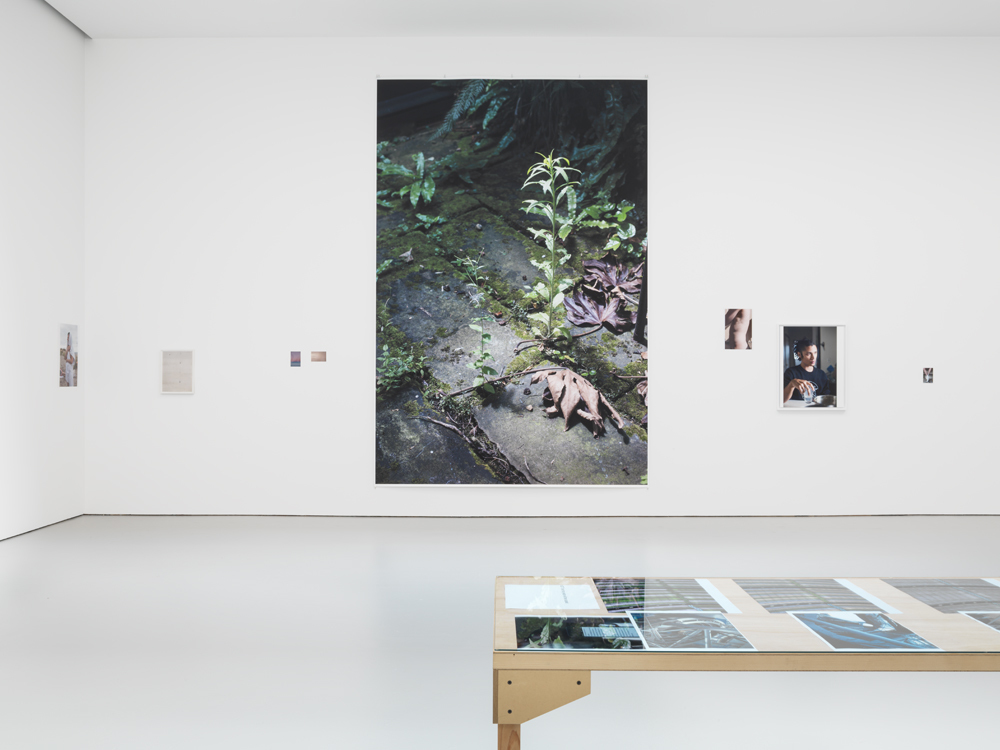 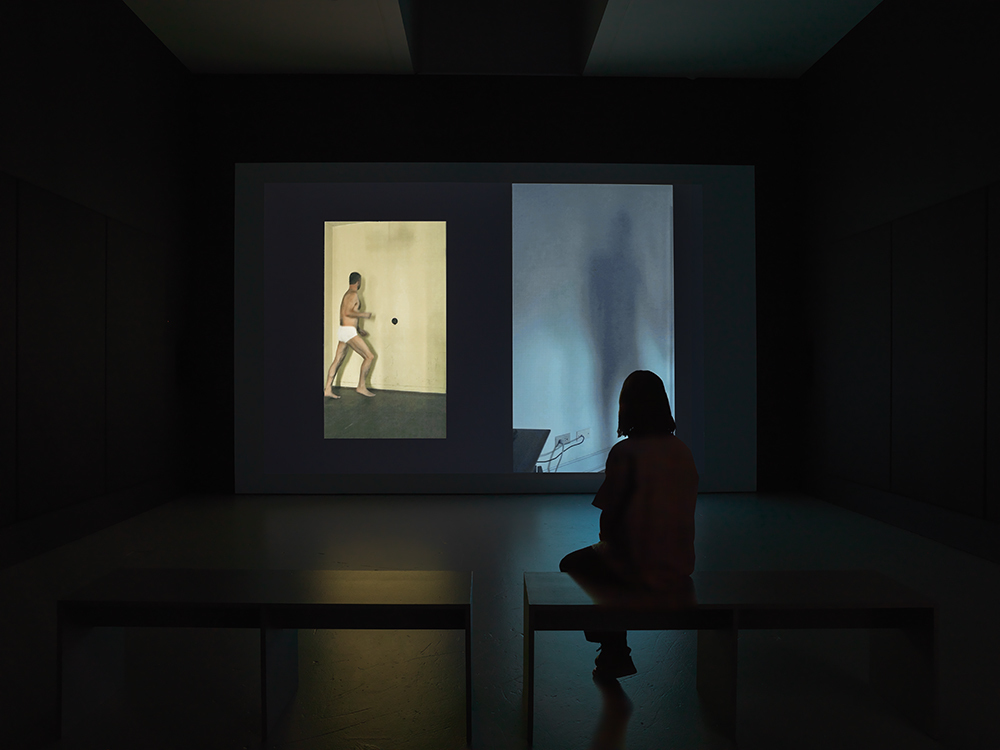 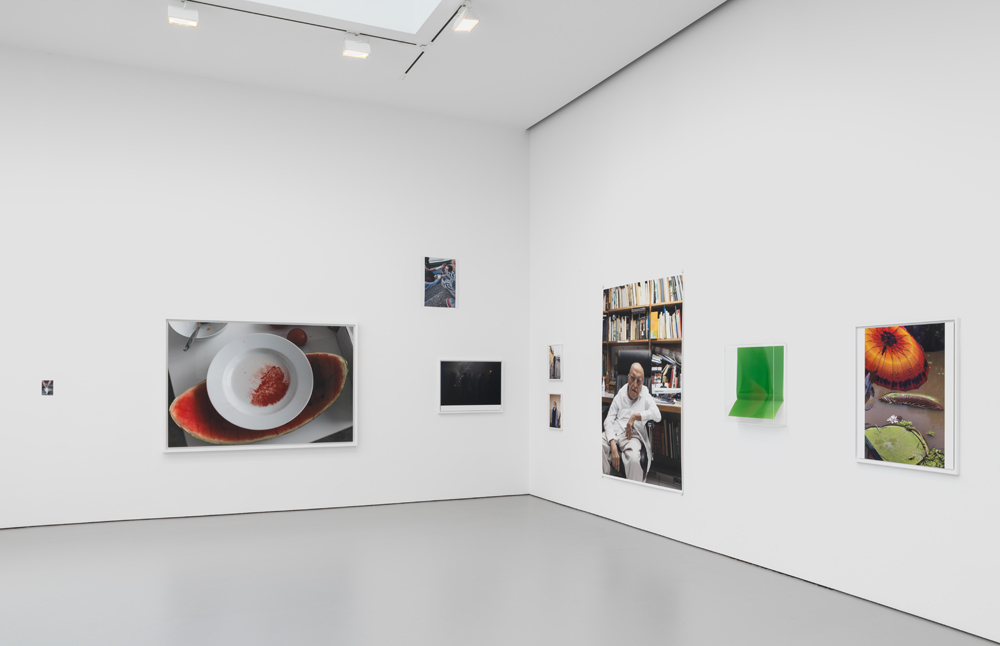 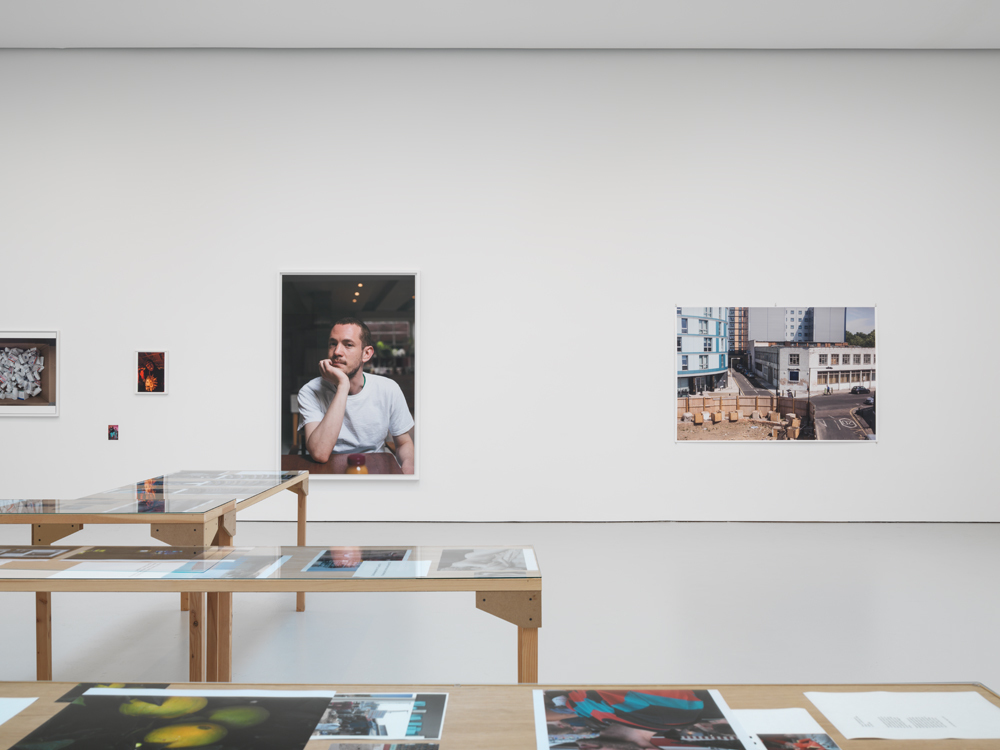 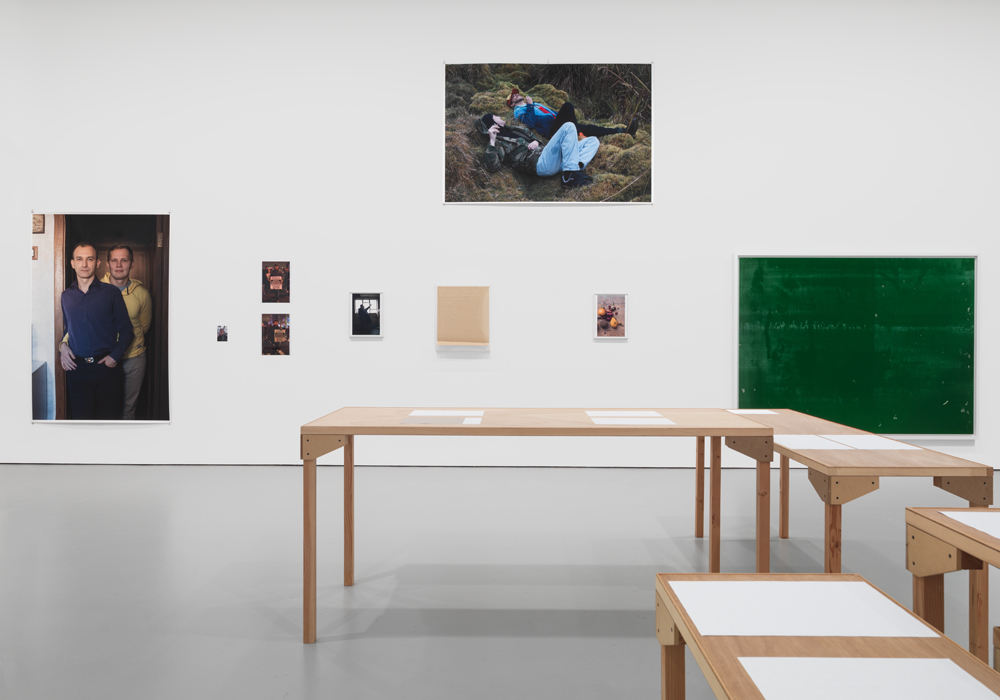 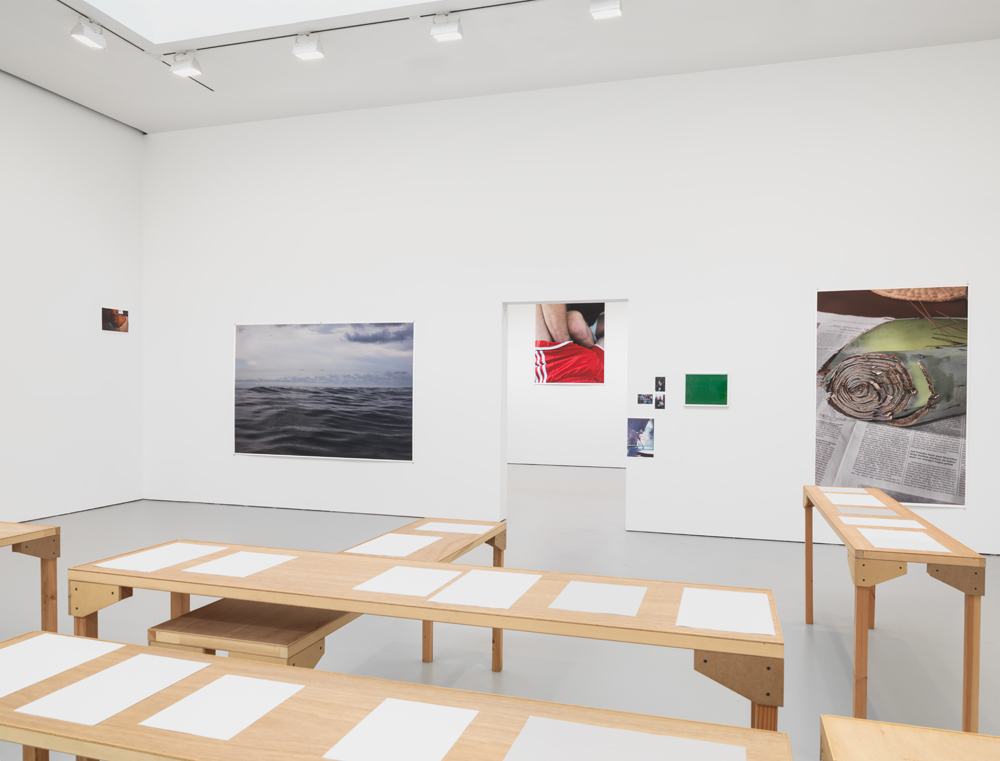 David Zwirner is pleased to present its first exhibition with Wolfgang Tillmans since he joined the gallery in 2014. On view at 525 and 533 West 19th Street in New York will be over one hundred recent works installed by the artist, spanning a comprehensive selection of the major themes and processes in his oeuvre. The show also presents the United States debut of Instrument, a new, split-framed video. Concurrently on view through November 1 at The Metropolitan Museum of Art in New York is Book for Architects, a two-screen video installation of still pictures by the artist.

Since the beginning of his career, Tillmans has taken an active interest in the display of his works, using the exhibition as a distinct medium in its own right. Meticulous wall installations of photographs in greatly varying sizes, often hung unframed or taped directly to the wall, allow for a multitude of aesthetic as well as social relationships to crystallize. Each installation is arranged in dialogue with its particular space as well as the city it is in.

Bringing together pictures taken across the world of friends and strangers, as well as the natural and built environment, the present exhibition addresses one of the main questions explored in Tillmans’s recent practice: as photography becomes increasingly ubiquitous, and as ever higher resolution yields unprecedented views of our surroundings, how do pictures continue to shape our knowledge of the world? The artist proposes that there is still a space for perplexity, mystery, and emotional relevance.

Throughout the installation, photographs of activists in New York, Berlin, Osaka, Santiago de Chile, and St. Petersburg coexist seamlessly with glimpses into the artist’s private life, reflecting the broader tension in Tillmans’s oeuvre between the political and the personal. Extending this thematic, new nightlife pictures present underground club venues frequented by the artist as sanctuaries for free expression and even protest, offering a subtle counterpoint to the flood of uniform party pictures that now clutter social media.

A new table installation in the gallery’s back room, TSC (Time, Mirrored), combines photographs of architectural elements and telescopes with punctuated statements about the expanses of time. The universality of the messages finds a temporary visual counterpart in the surrounding photographs. In another room, a multipart sculpture, I refuse to be your enemy, consists of blank paper neatly laid out on several tables of different heights. Minute variations in tint and transparency invite viewers to ponder the variability of color perception while also underlining the longstanding emphasis on the materiality of paper in Tillmans’s oeuvre, forcing for a moment attention away from the content-driven preoccupations of the medium.

Two walls in different locations are the backdrops to Instrument, Tillmans’s latest video. Human shadows dance against the bare surfaces, with a male figure materializing with his back to the viewer in the left, gyrating rhythmically to the sound of his own steps. His repetitive moves recall marionette performances and even a sense of the absurd, as the apparent lack of agency itself becomes a meaningful gesture. The beat of the steps is recorded by the camera and filtered through a music program, thus adding a self-generated soundtrack to the video. This playful, cyclical process whereby the protagonist is also the instrument is reflective of the way in which new pictures in Tillmans’s oeuvre are in continuous dialogue with what comes before them.

PCR, the title of the exhibition and an abbreviation for “polymerase chain reaction” (a technique in molecular biology of amplifying a DNA molecule), also echoes a principle interest in Tillmans’s oeuvre. Whereas PCR can determine the overall genetic identity of an individual from a trace amount of starting material (a single hair follicle, for example), each work is for the artist a sample from a seemingly infinite pool of possible subject matter. The question of when a picture becomes a picture, and when certain developments become noticeable, has remained a central concern throughout his career.

New technology, key to the Neue Welt series Tillmans started in the late 2000s, is manifest in the present exhibition with several works employing state-of-the-art tools. The unprecedented possibility of taking clear pictures of a dim streetscape while driving, as in the Sunset night drive works, reinvents a particularly American genre of urban photography popularized in the 1960s. Sendeschluss/End of Broadcast VII, measuring close to 3 x 4 meters, likewise captures a previously impossible subject in endless flux—here electronic noise on a television screen. Yet it finds an analogue counterpart in Tillmans’s ongoing Silver series, where un- or partially exposed photo paper is passed through dirty processing equipment, allowing residue and silver particles to settle on the surface with a near-infinite amount of detail. The artist has more broadly accredited the introduction of digital photography in his oeuvre with an altered perception of the world, whereby the depth of detail obtained in each image gives way to a feeling of the endless complexity of matter. This hyper-real sensation, however, does not displace the enigma of the picture for Tillmans, but rather reinforces the unbridgeable gap between extreme information and the inherent mystery of life, all the while underscoring the centrality of looking and observing.

Born in 1968 in Remscheid, Germany, Wolfgang Tillmans studied at Bournemouth and Poole College of Art and Design in Bournemouth, England from 1990 to 1992. In 2000, Tillmans was the first photographer and first non-British artist to receive the Turner Prize, an award given annually by Tate in London. In 2009, he received the Kulturpreis der Deutschen Gesellschaft für Photographie and was selected to serve as an Artist Trustee on the Board of Tate. He has been a member of the Akademie der Künste, Berlin since 2012, and was appointed a member of the Royal Academy of Arts, London in 2013. In 2014, the artist joined David Zwirner.

Currently on view are Wolfgang Tillmans: Your Body is Yours, a large-scale solo exhibition at The National Museum of Art, Osaka (through September 23, 2015), and Wolfgang Tillmans: Book for Architects, a two-channel video installation at The Metropolitan Museum of Art, New York (through November 1, 2015). Upcoming solo shows of the artist’s work will be presented at the Dům Umění – Galerie Současného Umění in Cěské Budějovice, Czech Republic (November–December 2015) and the Hasselblad Center, Göteborgs Konstmuseum in Gothenburg, Sweden (December 2015 – February 2016), organized on the occasion of Tillmans receiving the 2015 Hasselblad Foundation International Award in Photography.

Since the early 1990s, Tillmans’s work has been the subject of prominent solo exhibitions at international institutions, recently with a major survey that toured through South America. Opening in 2012 at the Museu de Arte Moderna, São Paulo, the exhibition traveled to the Museo de Arte del Banco de la República, Bogotá; Museo de Arte de Lima; and the Museo de Artes Visuales, Santiago. This presentation was organized by the Serpentine Gallery, London, where it was first on view in 2010. In 2012, the Kunsthalle Zürich presented photographs from the artist’s latest body of work, Neue Welt, which was shown the following year at Les Rencontres d’Arles in France. Also in 2012, the Moderna Museet, Stockholm displayed a selection of works spanning twenty-five years; the show traveled to the Kunstsammlung Nordrhein-Westfalen, Düsseldorf in 2013.

In 2006, Tillmans’s first New York museum exhibition, titled Freedom from the Known, was hosted by P.S.1 Contemporary Art Center, Long Island City. On view later that year was his first American museum survey, consisting of approximately three hundred photographs, co- organized by the Museum of Contemporary Art Chicago and the Hammer Museum, Los Angeles. It traveled to the Hirshhorn Museum and Sculpture Garden, Washington, D.C. in 2007, followed by the Museo Tamayo, Mexico City in 2008. In 2003, his first mid-career retrospective, if one thing matters, everything matters, was presented at Tate Britain in London to much critical acclaim.

The artist has operated the non-profit exhibition space Between Bridges since 2006. First located in London until 2011, Between Bridges has exhibited a range of work by artists, including David Wojnarowicz, Ull Hohn, Charlotte Posenenske, and Charles Henri Ford. In January 2014, it reopened in Berlin with a solo show of work by Patrick Caulfield. From 2003 to 2009, Tillmans served as a professor at the Städelschule in Frankfurt.