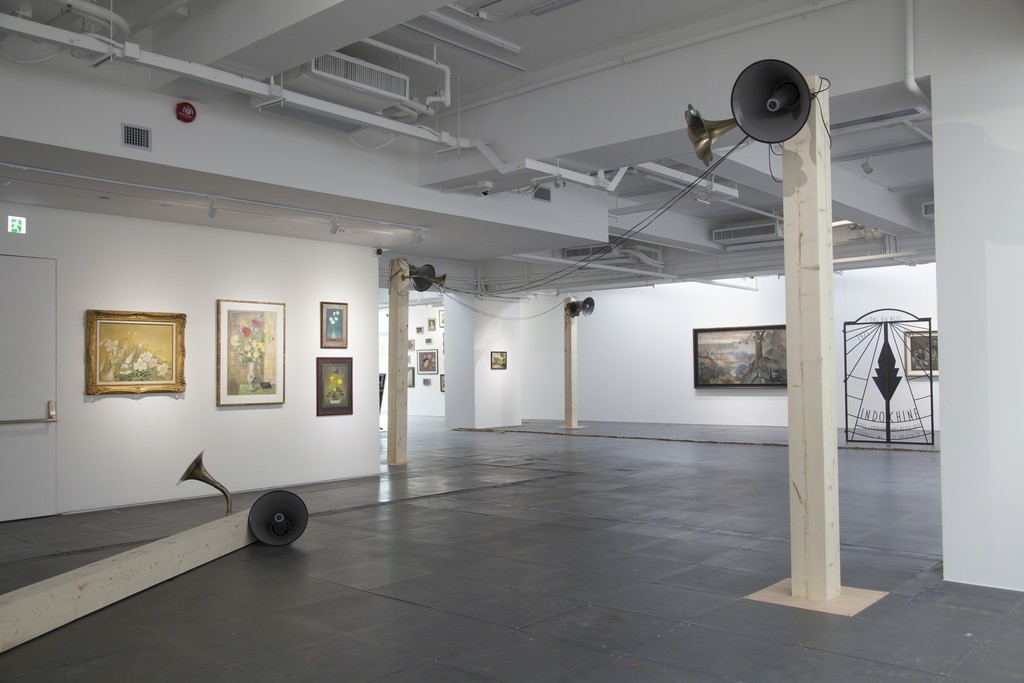 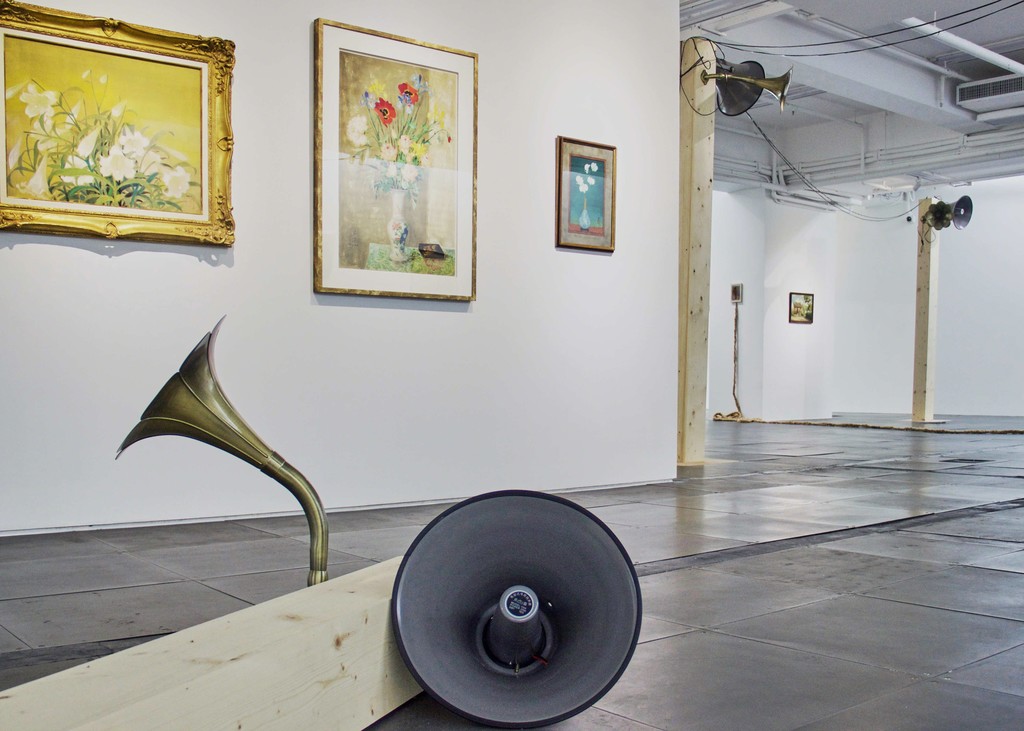 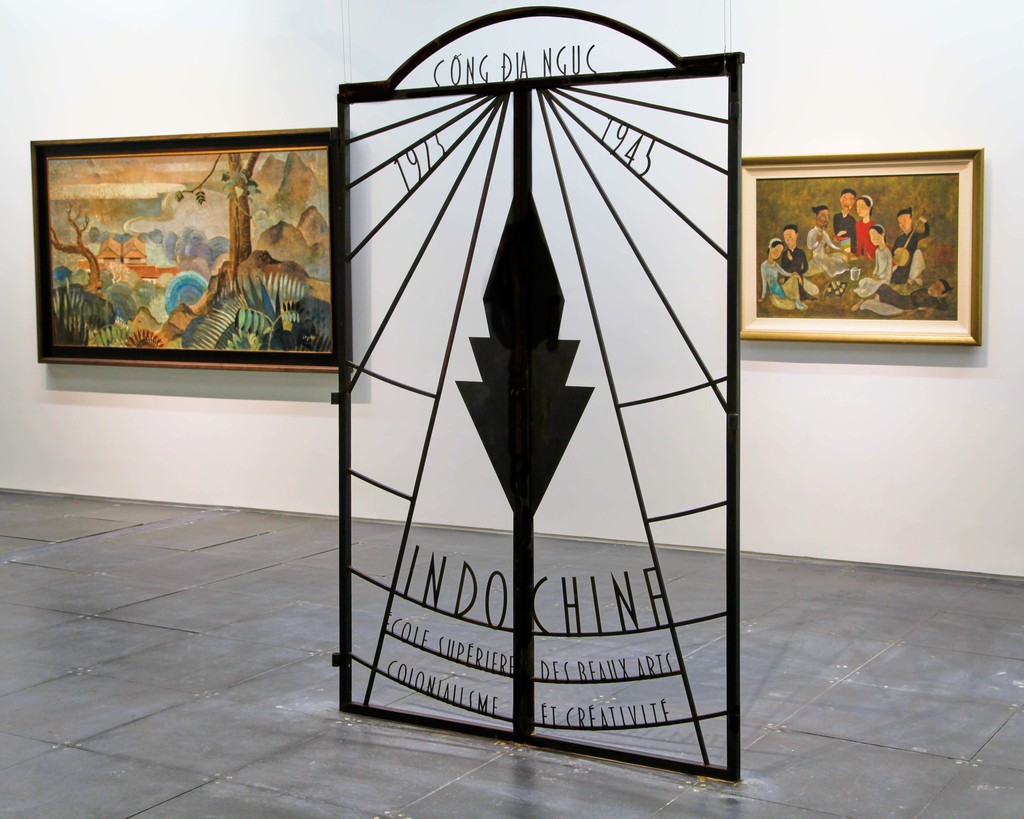 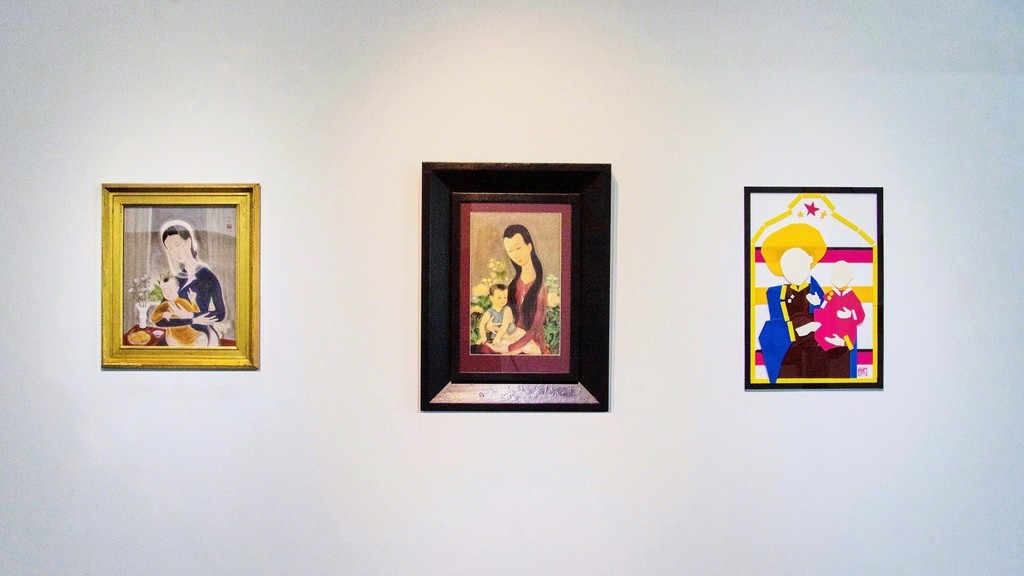 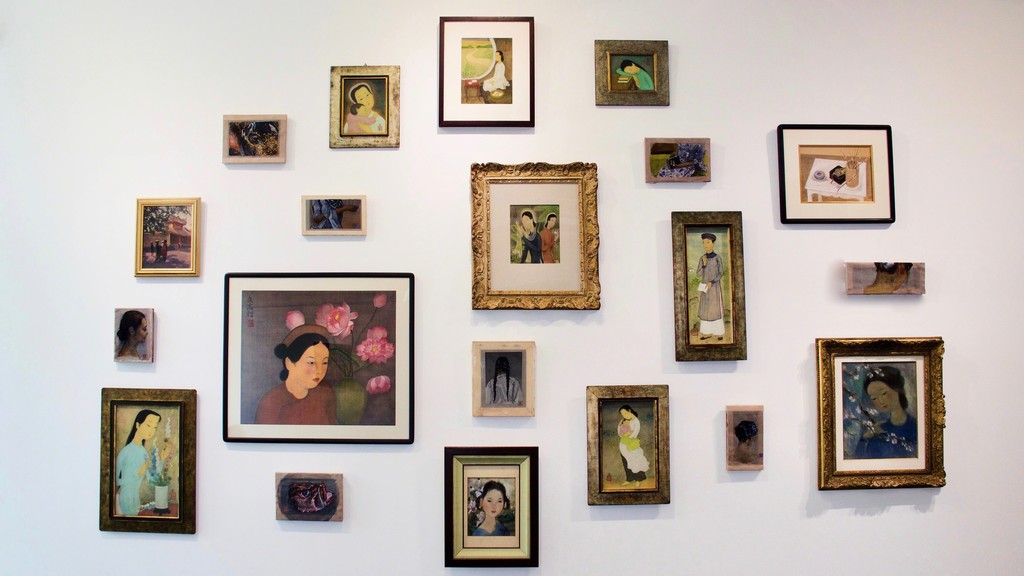 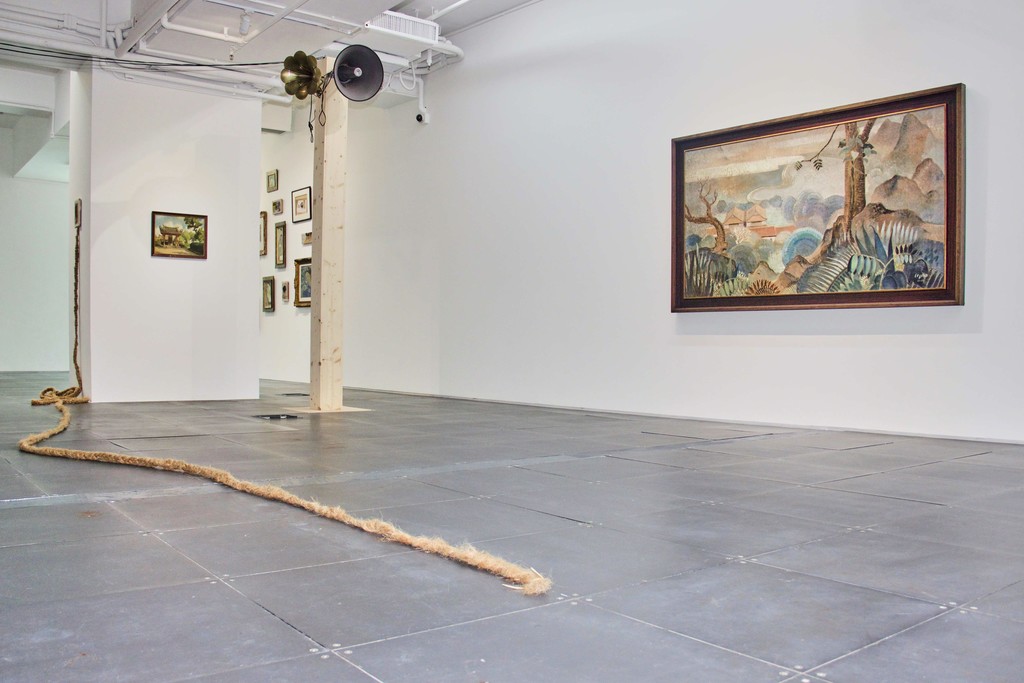 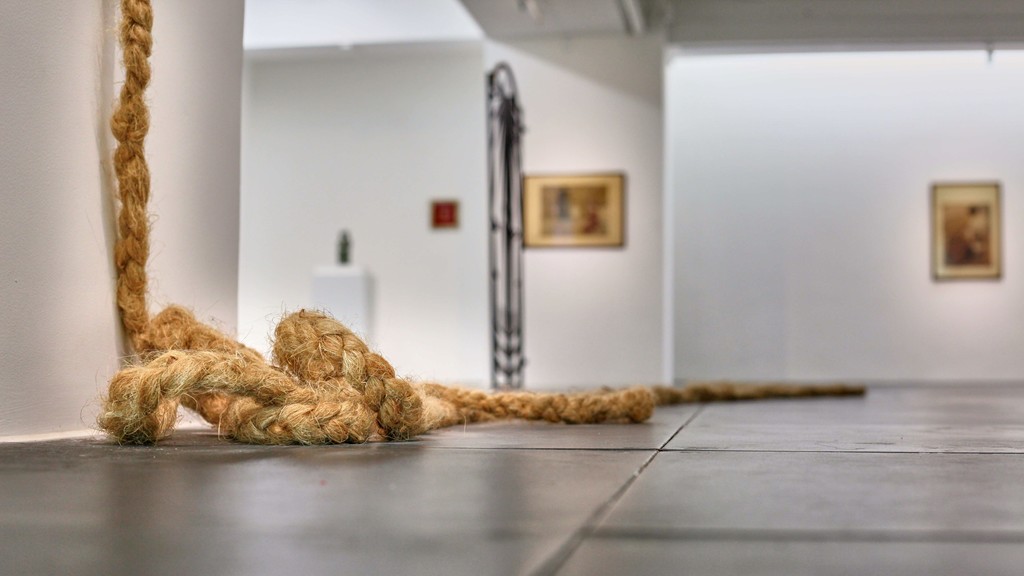 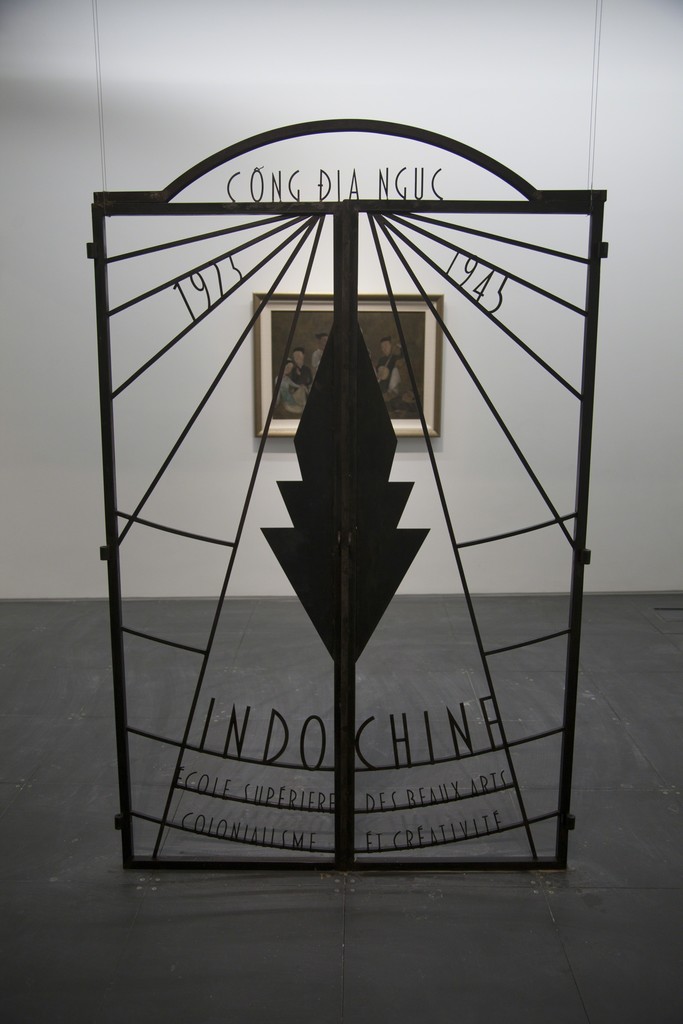 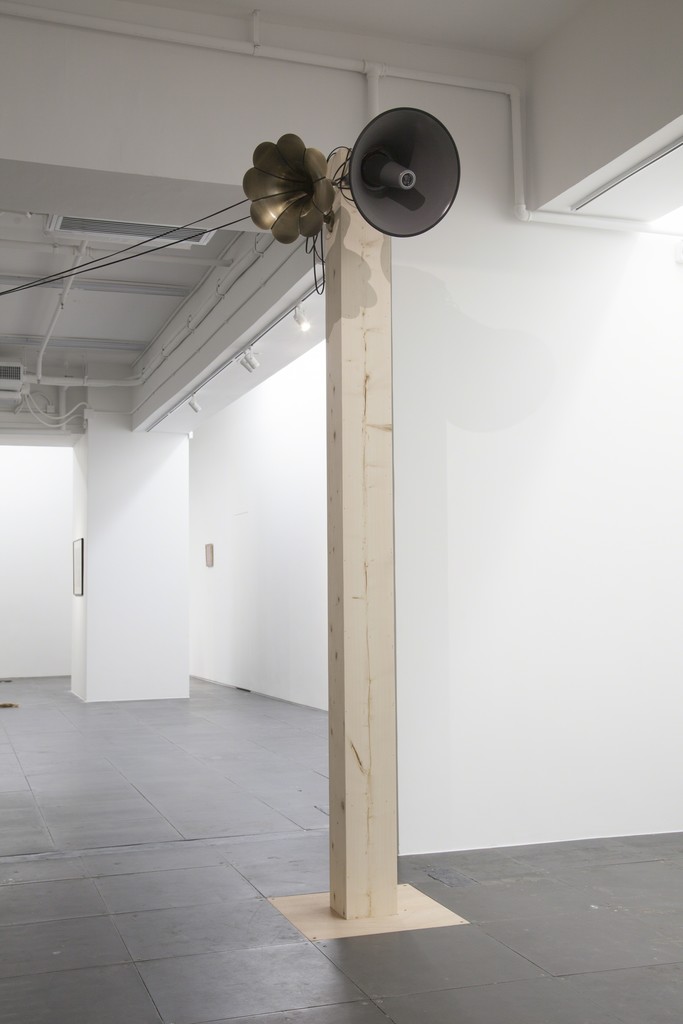 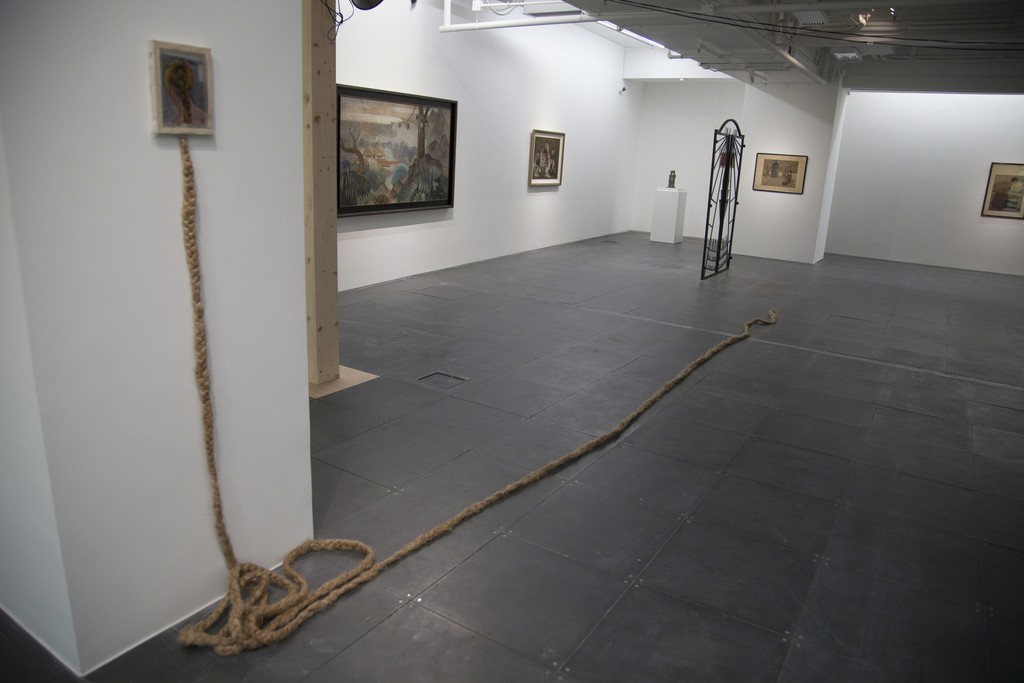 The exhibition marks the first time that a number of significant modern masterpieces from Vietnam will be showcased together in Hong Kong, as well as Streitmatter-Tran’s first major solo presentation in the city. Working across a range of mediums including watercolor on silk, unfired clay, sound, iron and cake, Streitmatter-Tran initiates dialogue that offers new perspectives on historically significant work from Vietnam’s first generation of modern artists.

The site-specific installation Vital Matter (all work 2017) features three unfired clay sculptures standing within enclosed vitrines. The vitrines contain timed irrigation systems that spray the sculptures with water at regular intervals; over the course of the exhibition, the constant moisture melts and disfigures the figurines. When placed beside modern Vietnamese ink and silk figurative paintings, Vital Matter directly challenges society's perceptions of beauty over time, as well as commenting on the fundamental difficulties in capturing and preserving the beauty of form.

Also erected in the gallery are four towering beams with megaphones and aged phonographs attached to their peaks. Referencing the outdated wartime speakerphones that are still used for propaganda across Hanoi, the capital of Vietnam, the work The Thin Black Line speak to the cultural, social, and political impact of the Vietnam War (also known as the American War) on art created before and after the conflict. Ambient music by the experimental musician Nhung Nguyen emanates from the speakers, reinventing––repurposing––its function from projecting political propaganda to playing sounds that imagines an alternate Vietnam.

The Gates of Hell (Cổng Địa Ngục) is an iron gate made in the French art deco style that was absorbed by Vietnam in the 1920s and 1930s. On the gate are the words “École Supérieure des Beaux Arts” and “Indo Chine,” in homage to a colonial school which existed from 1925 to 1945 in Hanoi, and that produced many of Vietnam’s early modern artists. As well as remarking on the schools's impact on creativity in Vietnam, the gate also powerfully highlights complications ushered in by colonialism, as the Vietnamese words “Cổng Địa Ngục,” or “The Gates of Hell,” are positioned at the top of the gate—a warning for all those who pass through.

The work Excavation/Elevation (After Champa) comprises three cakes in the shape of temples that are from the Champa Kingdom (2nd century to the 19th century) that existed in Vietnam. The buildings represent the distant past and recreating them as consumable cake is a statement on how the commodification of ancient Vietnam has become equivalent to baking a delicious cake to be visually appreciated and then devoured. In the context of this show, Excavation/Elevation (After Champa) asks if this will be the fate of all culture.

Alluding to the deep blacks and realist style in the works of modern artist Nguyen Phan Chanh, Streitmatter-Tran creates watercolor and silk paintings titled Configurations in Black (After Nguyễn Phan Chánh). This series is Streitmatter-Tran’s first foray into the traditional medium; his self-taught, contemporary style and techniques provides radical contextualization and conversation to the masterpieces, framing them in a new light.

As an art advisory, Art Agenda, S.E.A. brokers private sales and advises and manages the collection of a few key collecting clients. Since its inception in September 2016, it has moved numerous significant examples of modern and contemporary Southeast Asian art between private collections. The curatorial arm of Art Agenda, S.E.A. focuses on curating exhibitions centred around topics and areas in modern Southeast Asian art in 2017 and 2018. It will continue to work with galleries, dealers and other institutional partners to mount quality exhibitions centred around Southeast Asian art.

de Sarthe Gallery was founded in 1977 in Paris, later establishing galleries in America and most recently in Hong Kong and Beijing.

de Sarthe Gallery represents and exhibits a diverse spectrum of international artists, with a focus on presenting the highest quality contemporary art and historically significant programming. Since its move to Hong Kong in 2010, the gallery has continued to host groundbreaking shows for artists like Auguste Rodin, Hans Hartung, Chu Teh-Chun, Zao Wou-Ki, Robert Rauschenberg, Chen Zhen and Bernar Venet. The gallery has also exhibited pioneering group shows such as gutai and the Pioneers of Chinese Modern Paintings in Paris. In 2017 the gallery opened a 10,000 square foot space in Hong Kong's art district, Wong Chuk Hang, to properly honor masterpiece art works and expand its program of international contemporary artists.

In 2014, de Sarthe extended its influence by settling in Caochangdi, a renowned art district in Beijing. With an 8,000 square foot space, the gallery has taken an important role exhibiting a wide range of artists that lead the emerging art scene. A dedicated project space was inaugurated in 2016 to host experimental exhibitions, with the goal of break breaking down cultural boundaries and providing an alternative vision to the global art market.