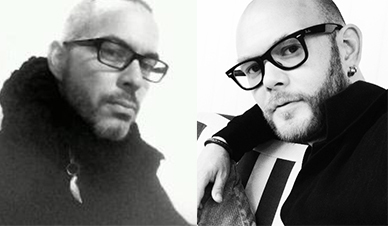 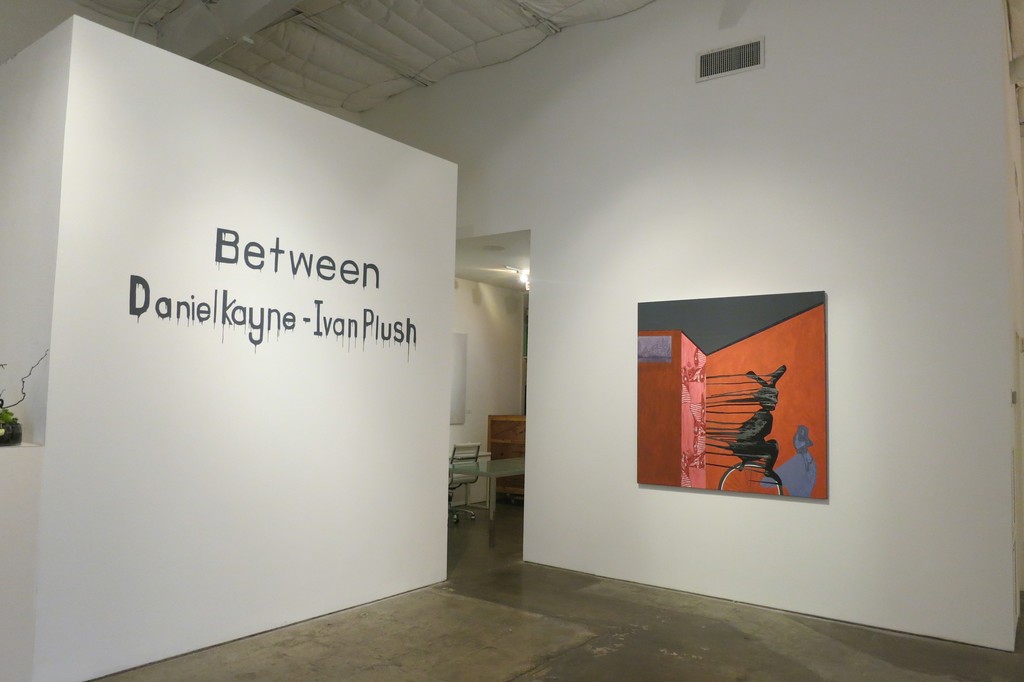 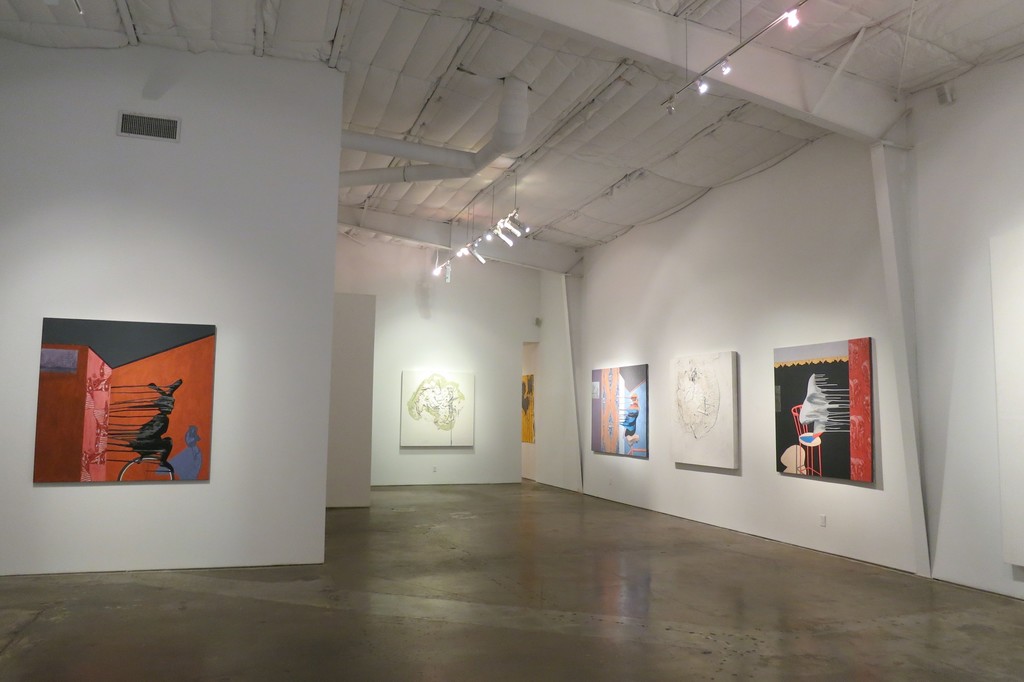 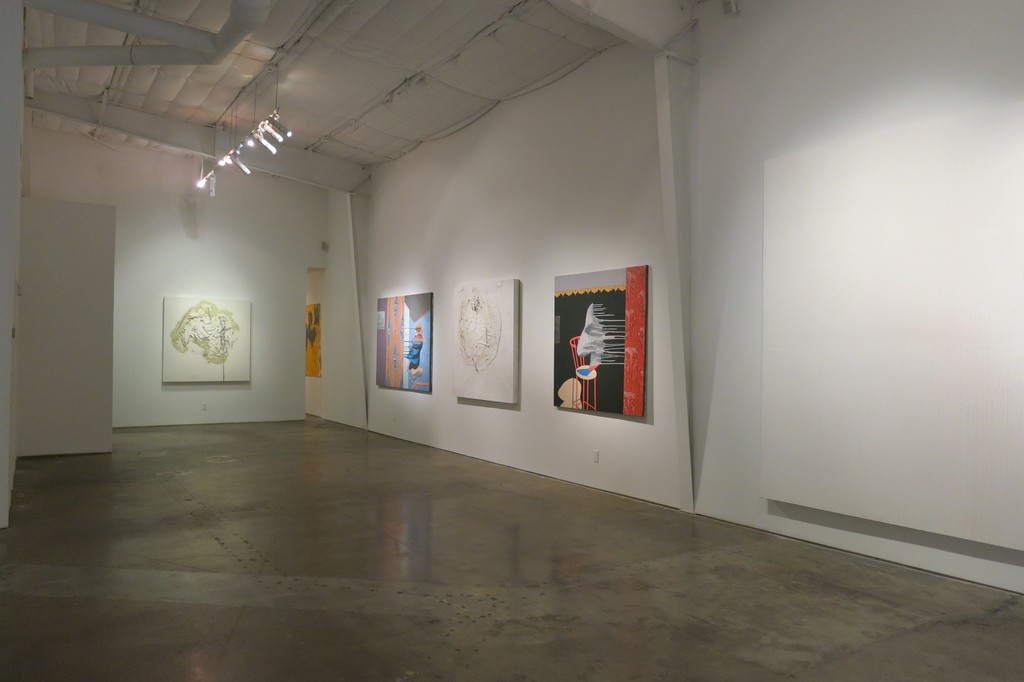 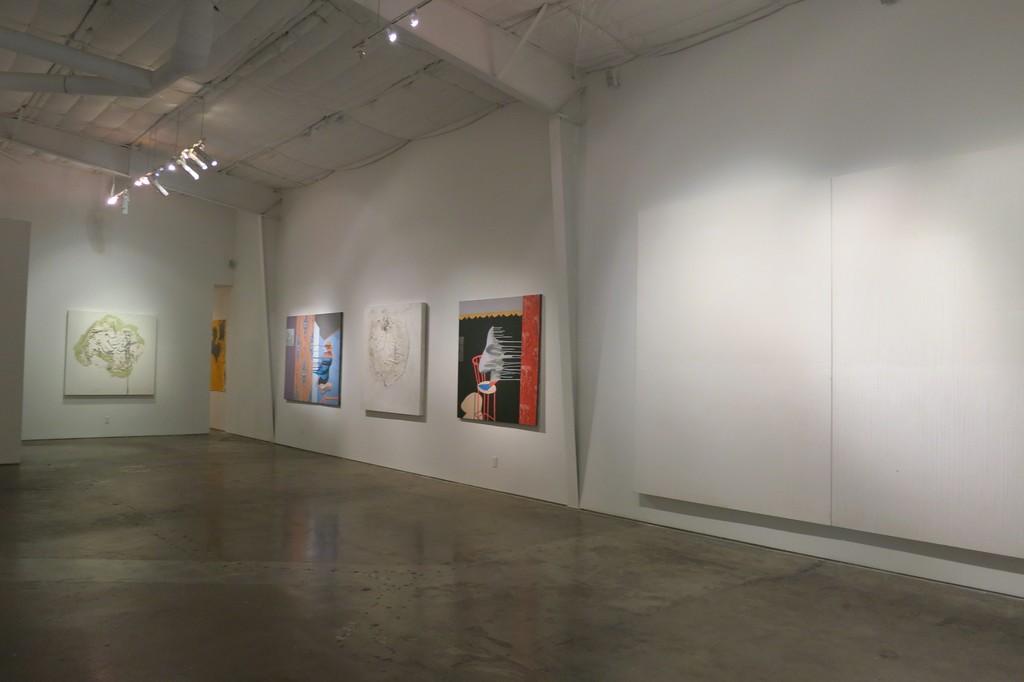 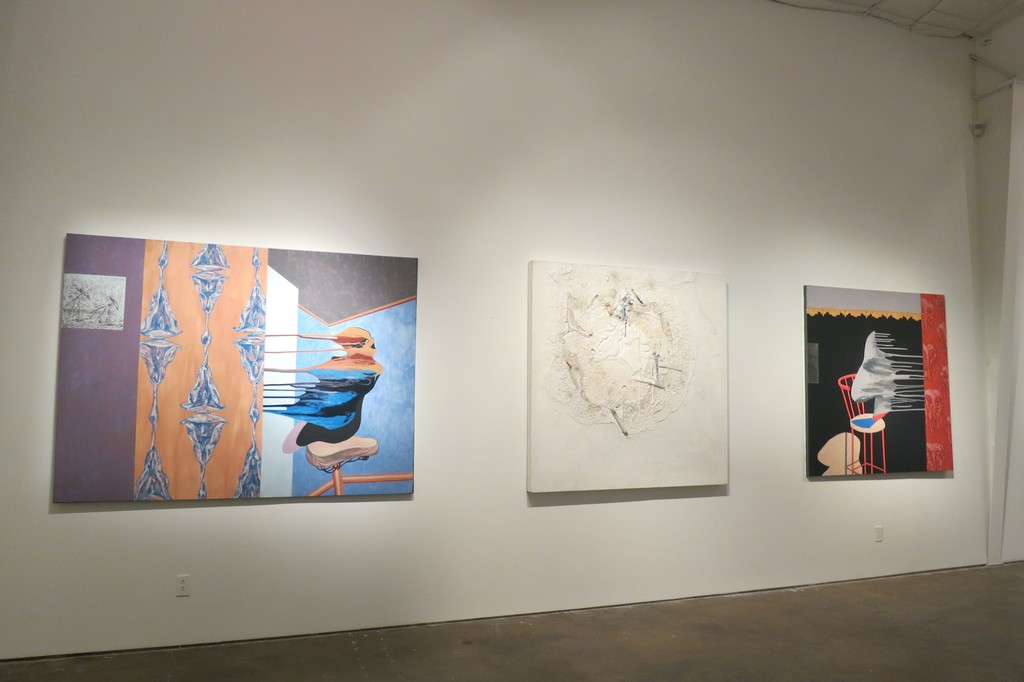 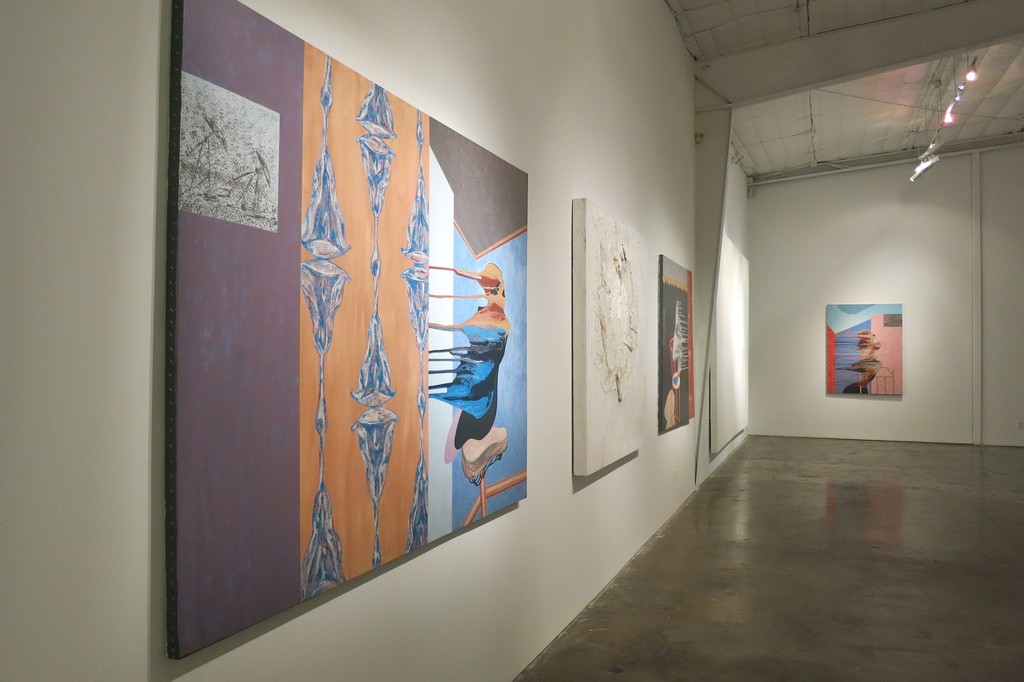 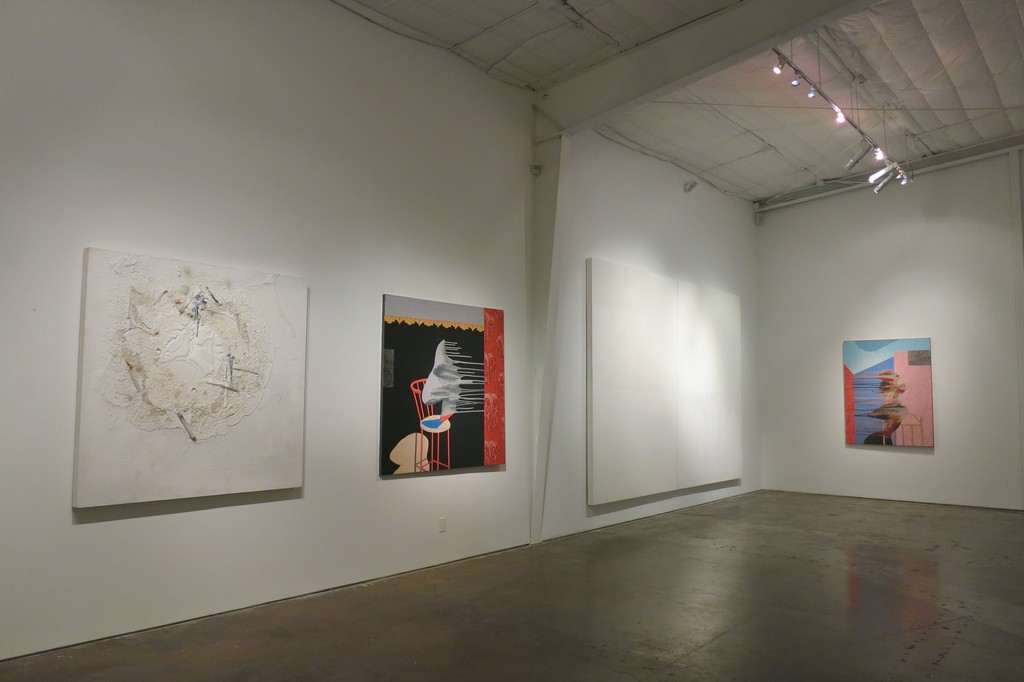 Deborah Colton Gallery is pleased to present Between: Daniel Kayne – Ivan Plusch, an exhibition featuring accomplished young Russian artist, Ivan Plusch and the late Houston artist, Daniel Kayne. This unique show includes large scale paintings on canvas and various mixed media works of these two talented and thoughtful artists. Although born into very different political and social environments, both artists were inspired by a strong desire to create a positive difference through their works which are remarkably cohesive, though also distinctly different.

Ivan Plusch, born in 1981, is a young Russian artist on the rise and part of the Nepokorionnye Group. He is based in St. Petersburg and has studied in various art schools including the State Academy of Art and Design, the Roerich Art School and the PRO ARTE Institute. Plusch is among a generation of artists who were still children at the time of the fall of the USSR and was influenced by the consequent sudden sociological and economic changes in his country in the early 90s. His work is heavily influenced by the effects from these changes… from the freedom of speech, hard fought and regained with difficulties by the people and by their collective relationship with society. Whether influenced by the effects of alienation or of liberation, the work of Plusch is more sophisticated and evolved than simply representing his sociological observations.

Working with a variety of mediums, Plusch reinterprets the history of art and the norms of social realism, in particular those of monumental sculpture by integrating them into his paintings. As an artist influenced by the thoughts and trends of Post-Soviet art, Ivan Plusch plays with the image of a happy future and with elements of the former Communist Regime. Plusch also questions on a larger scale format, the relationship of men within their environment.

Ivan Plusch’s work has been exhibited throughout Russia and worldwide including in France, the Netherlands, South Korea, the United Kingdom and the Balkans. Most recently his work has been included the 2015 Venice Biennale at Glasstress Gotika which was a collaboration between the State Hermitage Museum in St. Petersburg and Venice’s Berengo Sutdio. His work is in prestigious private and public collections world-wide. The works presented at the Deborah Colton Gallery booth at the 2015 Houston Fine Art Fair marked the first presentation of Plusch’s works in the United States.
Daniel Kayne was an award winning painter, sculptor and performance artist born in Liberty, Texas. His fascination at an early age with the act of creating ignited an insatiable passion for what was to become his career as an artist. Kayne’s work was first seen at the Deborah Colton Gallery in a 2006 solo exhibition Urban Mix. He later received a Master’s Degree from the University of Houston. His studies included painting at the Glassell School in Houston and painting and silk-screening at the New York School of Visual Arts. Kayne used both his Houston and New York studios to create his solo exhibition, Dividing God which was shown at Deborah Colton Gallery in 2008. In 2008 also, Kayne was honored twice, first as the first place winner of Lawndale Art Center’s Big Show in Houston, Texas and then by the Texas French Alliance for the Arts, as their first annual art exhibit and competition winner. These awards allowed him to receive an art residency in Paris as well as an exhibit in Shenyang, China.
Daniel Kayne had a zest for exploring and understanding the world including spending much time in Iran and the Middle East in 2009 where he worked towards trying to bridge cultural gaps to create more world-wide peace and understanding. The body of works created from his time in Iran was featured at Deborah Colton Gallery during FotoFest of 2010. Through this exploration, Kayne developed a higher level of thinking and attained a truly global and universal perspective. This self- actualization brought him to create a studio in Houston called The Temple where he spent much time meditating and thinking about the human living in the world today all as one within the universe and presenting his work.
As Daniel – Kayne evolved, he started to donate more of his time to non-profit/ good-will projects, including A Day With Art, which benefited the AIDS Foundation Houston Teen Leadership Forum and Notre Soleil a public art installation created for the children of Leon Berard Hospital in Lyon, France which is was fully dedicated to. In 2011, Daniel Kayne’s solo exhibition at The MAC in Dallas reflected this change also and was both meditative and inspirational. This exhibition received much attention and continued to reveal his evolved spiritual journey. In 2013 Deborah Colton Gallery hosted a tribute exhibition of Daniel Kayne’s work entitled Reflections on Reality. The exhibition was a celebration of his life through his art and allowed his friends and collectors to reflect on Daniel-Kayne’s life and accomplishments. Though the Houston art community suffered a great loss at Kayne’s passing, his life’s vision and work continues to make a huge impact in the art world today.
Deborah Colton Gallery is founded on being an innovative showcase for ongoing presentation and promotion of strong historical and visionary contemporary artists worldwide, whose diverse practices include painting, works on paper, sculpture, video, photography, performance, conceptual future media and public space installations. The gallery aspires to provide a forum through connecting Texas, national and international artists to make a positive change.