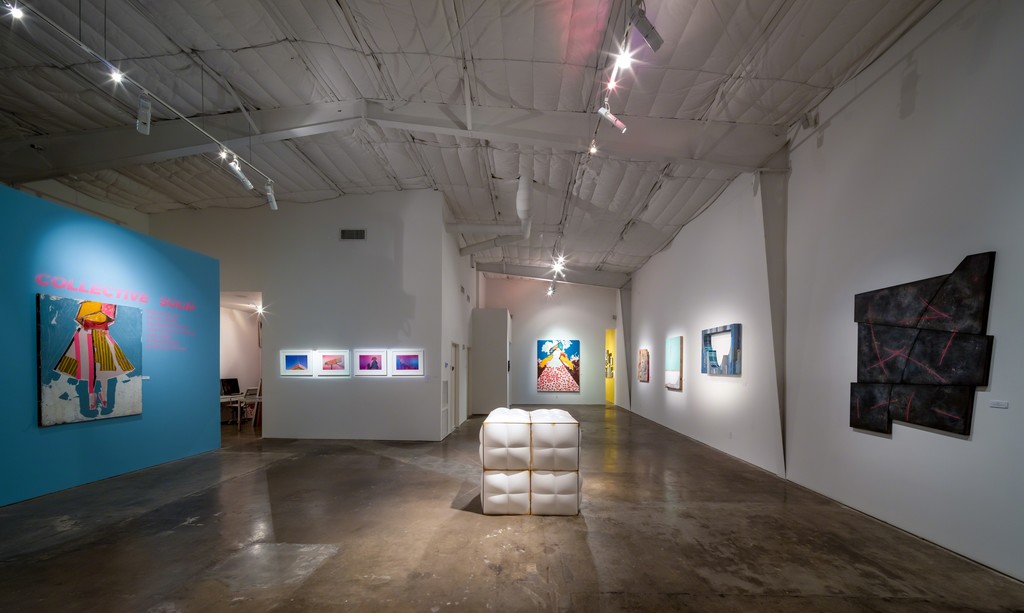 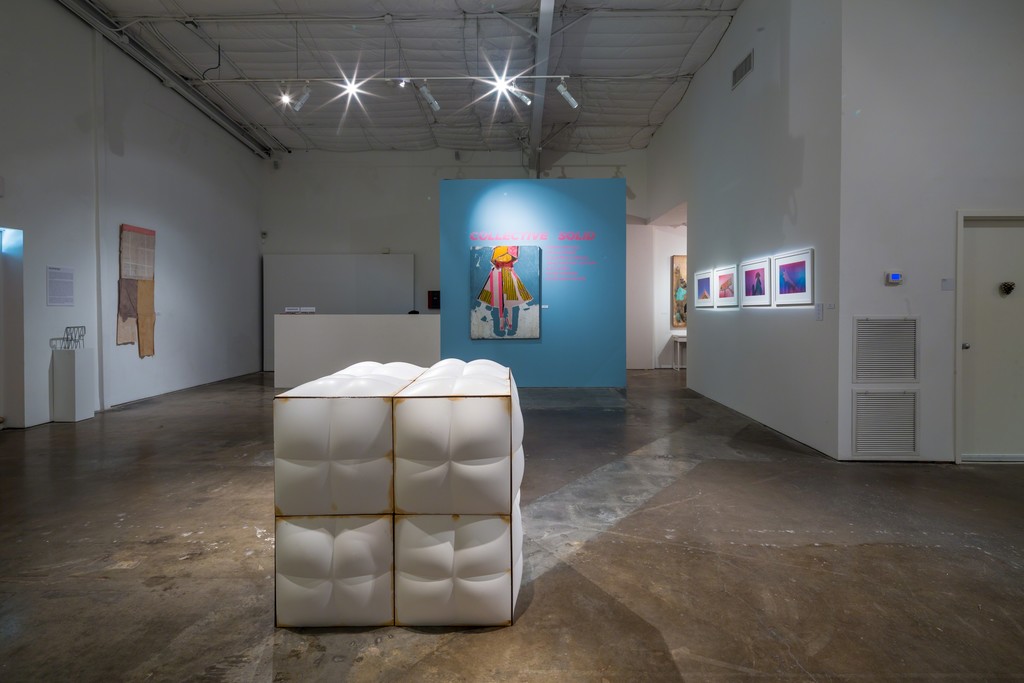 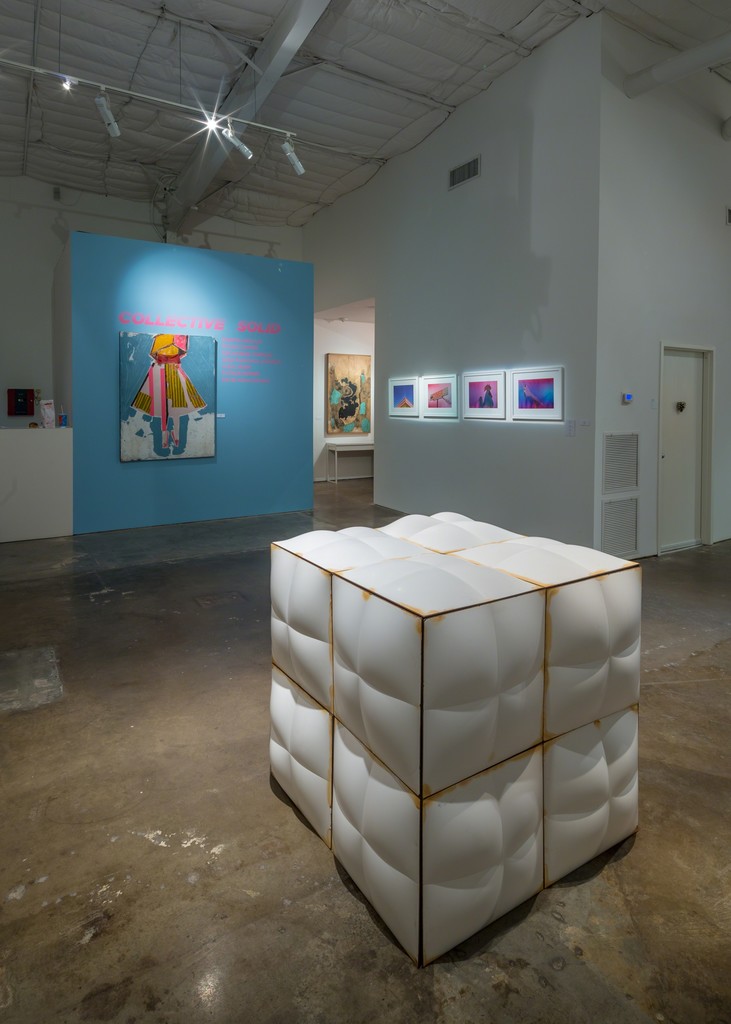 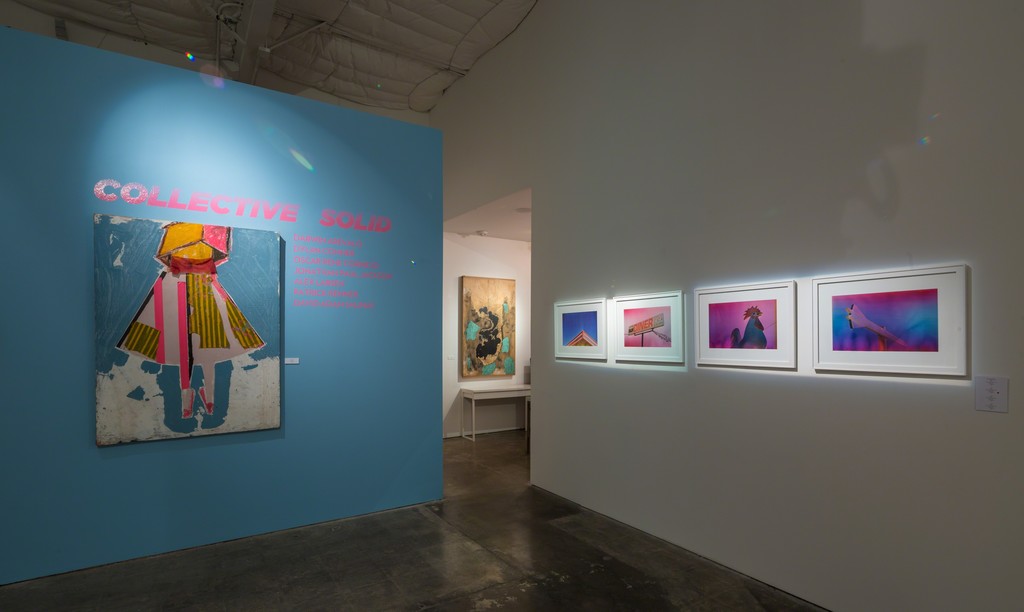 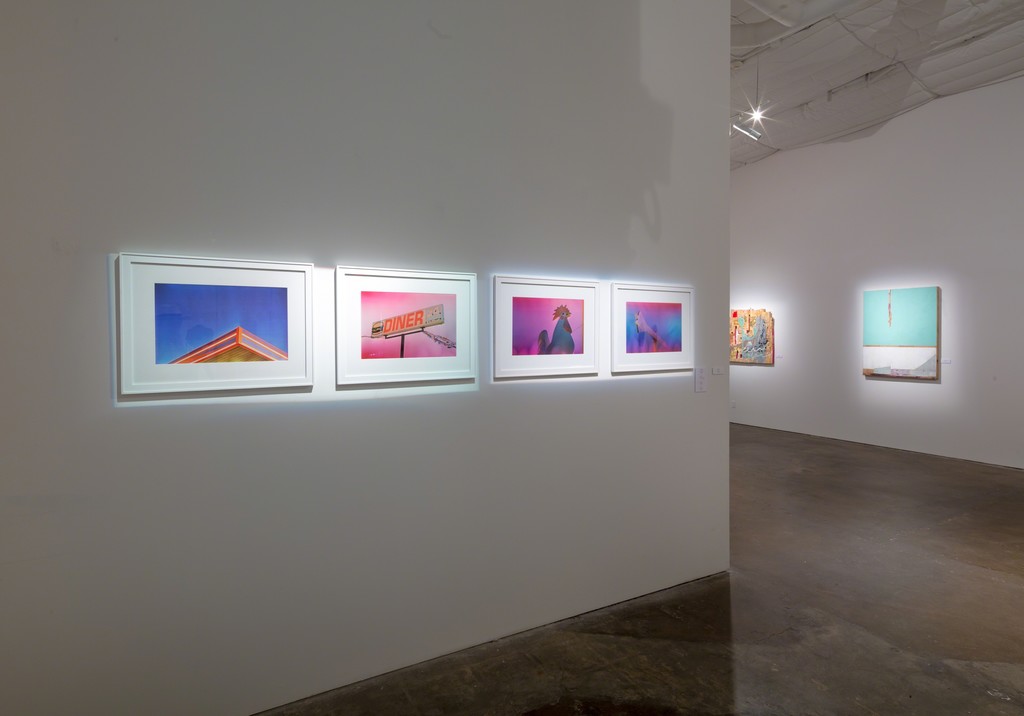 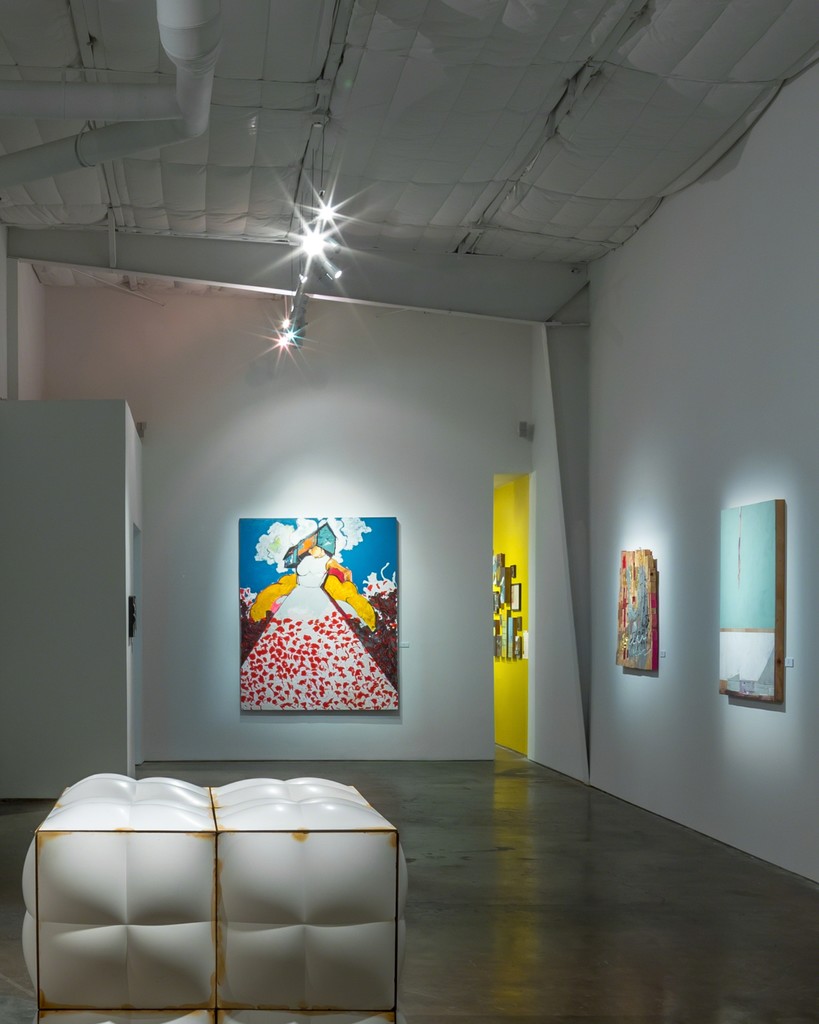 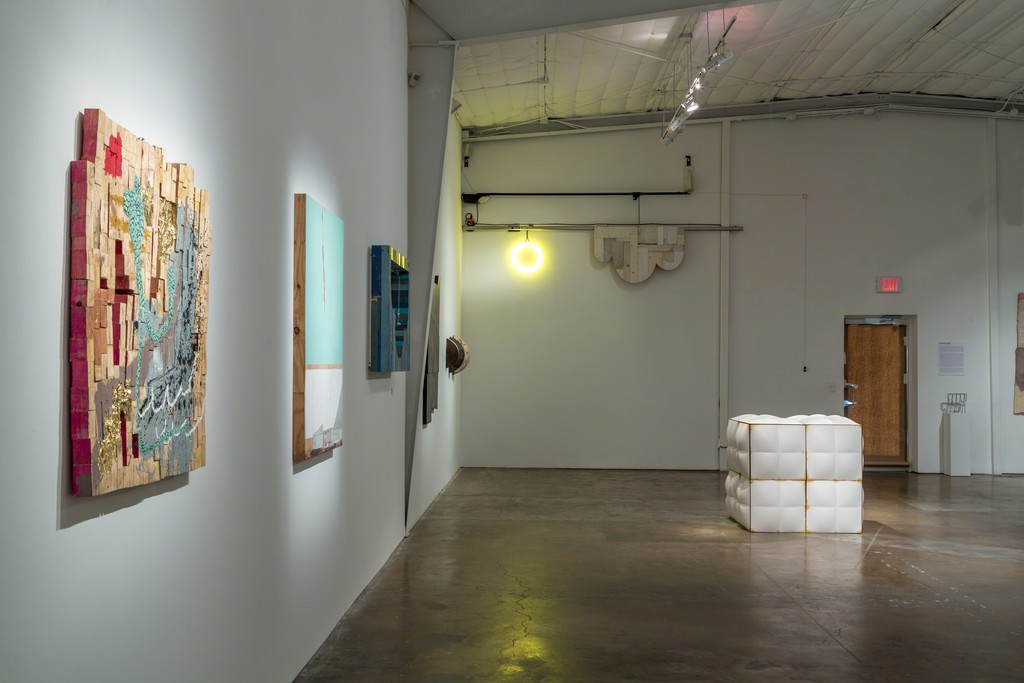 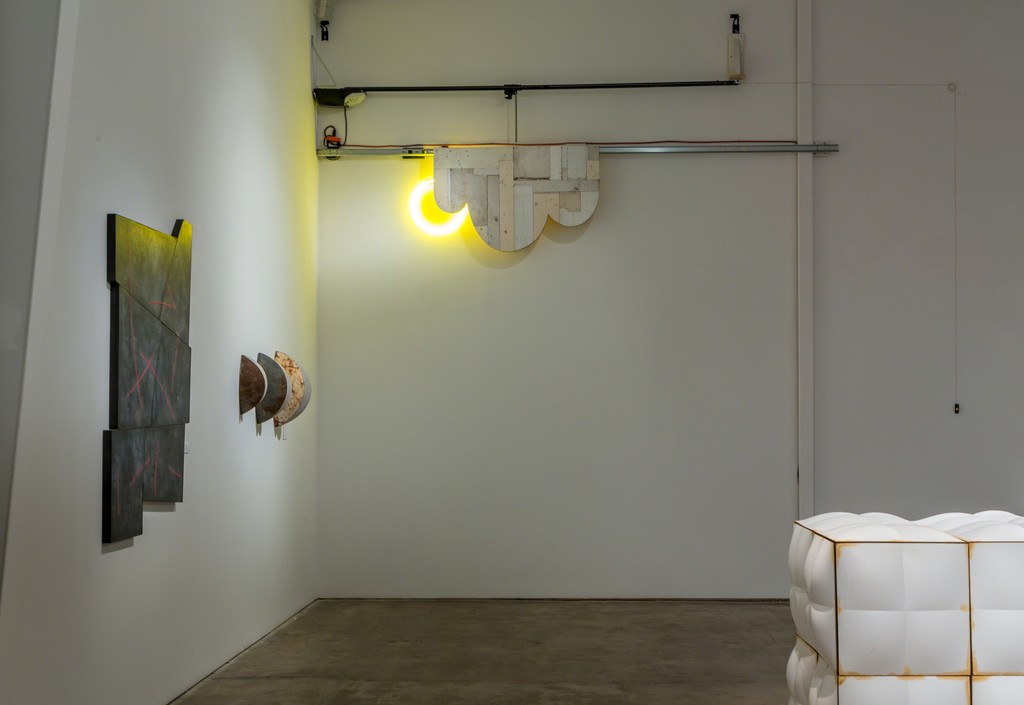 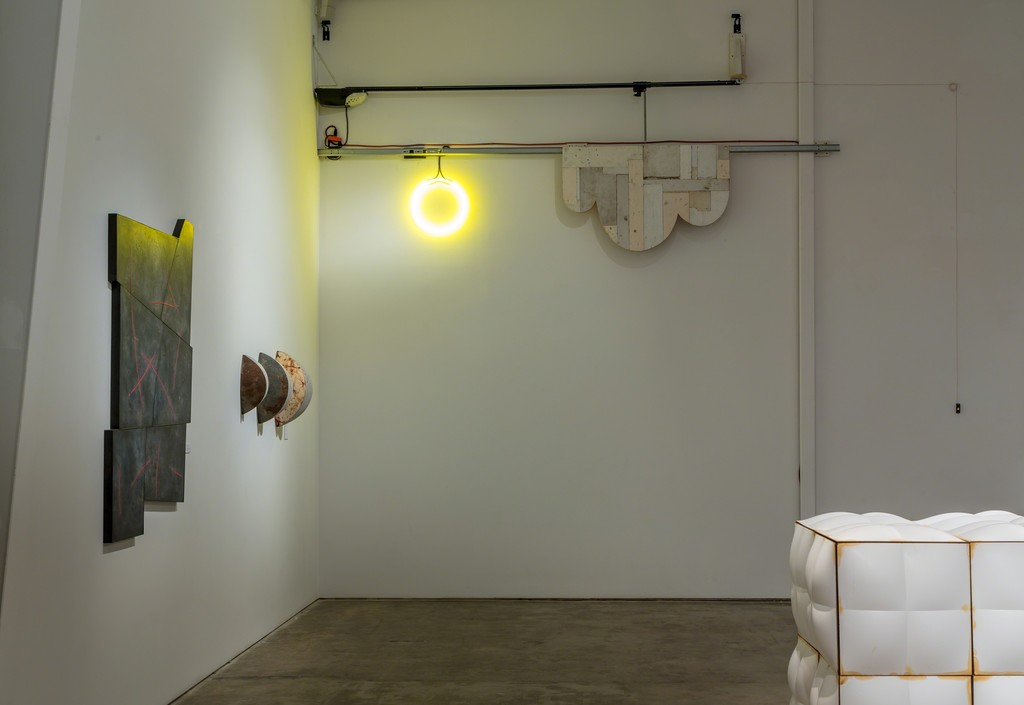 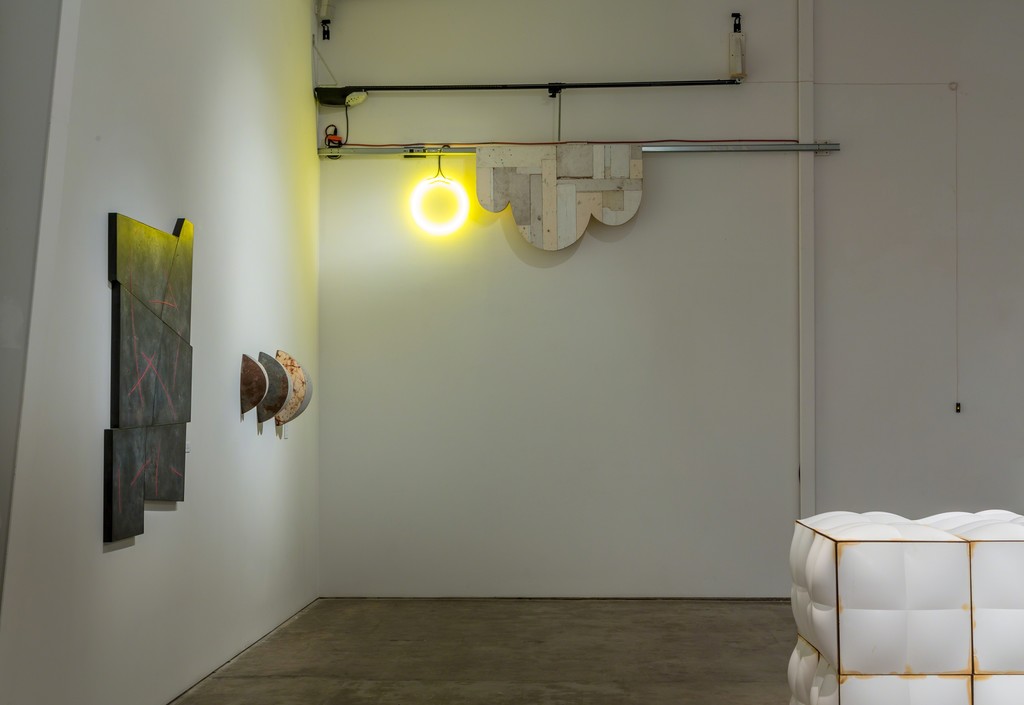 Deborah Colton Gallery is pleased to present Collective Solid, an exhibition that features work from eight Houstonbased artists as their burgeoning creative practices overlap and diverge. The exhibition evaluates the influence of shared creative space on artistic dialogue and output as well as the significance of community to an artists’ practice and is inspired by the synergistic potential for mutual benefit through collaborative effort. Collective Solid marks the first curatorial project conceived by Theresa Escobedo for the Deborah Colton Gallery exhibition space. The exhibition opens Saturday, July 18th, 2015, with a reception for the artists from 6:00 to 9:00 pm and will be complimented by an artist panel discussion on Sunday, July 19th, from 12:00 to 2:00 pm.

Each artist blurs the lines between their medium of choice and alternative applications and we see amongst this group overlapping and combined expressions, of painting and sculpture or photography and painting for example, as well as an openness to influence among each other and an enthusiasm for collaborative work. Common threads this panel of artists share in artistic execution are rooted in material exploration and experimentation, considered use of color, and in applied layering techniques, to name a few. A significant common denominator among this group of artists can also be found in the studio space that hosts, or has hosted in the past, their respective artistic practices –these artists work among a tightly-knit group of resident artists in one of the most dynamic artists’ space in Houston – El Rincón Social. This studio space and collective, housed in a warehouse in the city’s East End Cultural District – the newest cultural district in Houston - was founded in 2006 with the intent to support critical dialogue and artistic practice and with the understanding that combined creative effort can positively impact and shape a community. ERS, as it is familiarly known, sees in its artists and artistic products a standout dedication to process and to material exploration, unmatched elsewhere in the city.

Darwin Arevalo received his BFA in painting from the Kansas City Art Institute. During his time in Kansas City he participated and worked in community based non-profit organizations for inner city youths and programs as an art educator, lead artist, and lead muralist while also showing in local galleries. He hopes through his work to engage with the local community on the street level and to contribute to the development of a progressive and innovative artistic environment in Houston. The result of his artistic experimentation is rooted in processes that exploit the unpredictable intersections of materiality and form. as each of his artworks is in the first place, a reaction to itself.

Drew Bacon began painting after apprenticing with Angelbert Metoyer, a Deborah Colton Gallery artist, as a sophomore in high school. He completed a Bachelor’s Degree in Painting from Pratt Institute in 2012. His current work researches relationships between the disciplines of painting, printmaking and animation. His work uses various forms of patterns and structure to describe movement in the built environment and the wider historical narrative.

Dylan DeBock Conner, born in Houston, received his BFA from Maryland Institute College of Art in Baltimore, MD and studied Art History at the University of Houston. Conner explores material, form, and process directly in the new works to debut in this exhibition. Concrete, steel, and plaster are the foundations of Conner’s most recent body of work. He investigates the dualities of liquid and solid, ridged and fluid, movement and rest. His latest series employs unique casting techniques, honed and developed through years of experimentation. Materials used are found, fabricated, manipulated and molded in these works that respond to the exhibition space. Controlled fabrication is complemented with an allowance for the materials to behave according to their physical properties.

Oscar Rene Cornejo was born in Houston, Texas. He earned his B.F.A. at the Cooper Union, his M.F.A. from Yale University in 2011, and attended the Skowhegan School of Painting and Sculpture in 2014. In 2004 he co-founded the Latin American Community Art Project (LA CAPacidad), where for seven years he directed summer residencies to promote intercultural awareness through art education programs open to the surrounding community. He was awarded a Fulbright Scholarship in 2007 to establish a print shop in rural El Salvador and was able to extend the LACAP residency to a year. His works are markedly political in subject matter and inspiration, but subscribe in the first place to tenets of formalism.

Jonathan Paul Jackson, a native Texan, is a self-taught artist working in Houston. Having apprenticed with and been influenced by Houston artist Angelbert Metoyer, Jackson has inserted himself into a heritage of Houston artmaking that begins, in some ways, with patriarchal figures in Houston art Jesse Lott and Bert L. Long, Jr. His artworks are the result of experiments in abstraction as he forages a new philosophy toward painting that is at once his own as well as part of a larger dialogue about the nature of painting and perception, executed through the filter of an African American perspective.

Artist Alex Larsen, also a graduate of the Maryland Institute College of Art, describes his work as the “physical realization of tactile experience.” His work is heavily influenced by relationships between man and nature and the manner in which people choose to interact, or isolate themselves, from the natural world. His work visualizes the human reaction to the developing paradigm of secondary physical observation and suggests that tactile experience no longer seems to be the primary encounter with the physical. Using a variety of materials, both traditional and contemporary, the artist translates the process of creation so that the result synthesizes both the intended form and the forces required to create it.

Patrick Renner, a native Houstonian, also received his BFA from the Kansas City Art Institute and his MFA from the New York State College of Ceramics at Alfred University. Renner teaches art part-time at the Sharpstown International School and maintains a rigorous studio practice. His artwork has been exhibited in many venues locally and in various venues in the United States. In 2014 his sculpture Funnel Tunnel garnered critical acclaim and a national award for public sculpture. It is scheduled to move to New Orleans for display beginning in summer of 2015. His presented works, tailored to this exhibition, make use of his familiar cloud motif and his signature woodworked sculptural methodology but also incorporate kinetic and electronic applications.

David Adam Salinas considers photography historically as being a medium that is most often associated with clarity, free from any artifacts from which it was made. Salinas’ aesthetic approach highlights the process of analog photo making with chemistry, the paper it is printed on, and evidence of hand crafted or applied alternative materials. He uses solvents and paints combined with custom developing recipes to manipulate the image in the same manner a painter would approach a canvas. He combines traditional darkroom photographic techniques with his own devices to produce a final image from his experience that weaves the subject matter of the photograph with the final treatments of the processes employed.

Theresa Escobedo is the Assistant Director at Deborah Colton Gallery and has been with the Gallery since 2011. She is also a co-founder and Director of Main Street Projects, an alternative art venue and artist collaborative in Houston. She studied at the University of Houston and received a Bachelor Degree of Architecture in addition to a Bachelor of Science in Environmental Design.

Deborah Colton Gallery is founded on being an innovative showcase for ongoing presentation and promotion of strong historical and visionary contemporary artists world-wide, whose diverse practices include painting, works on paper, sculpture, video, photography, performance and conceptual future media installations. The gallery aspires to provide a forum through connecting Texas, national and international artists to make positive change.