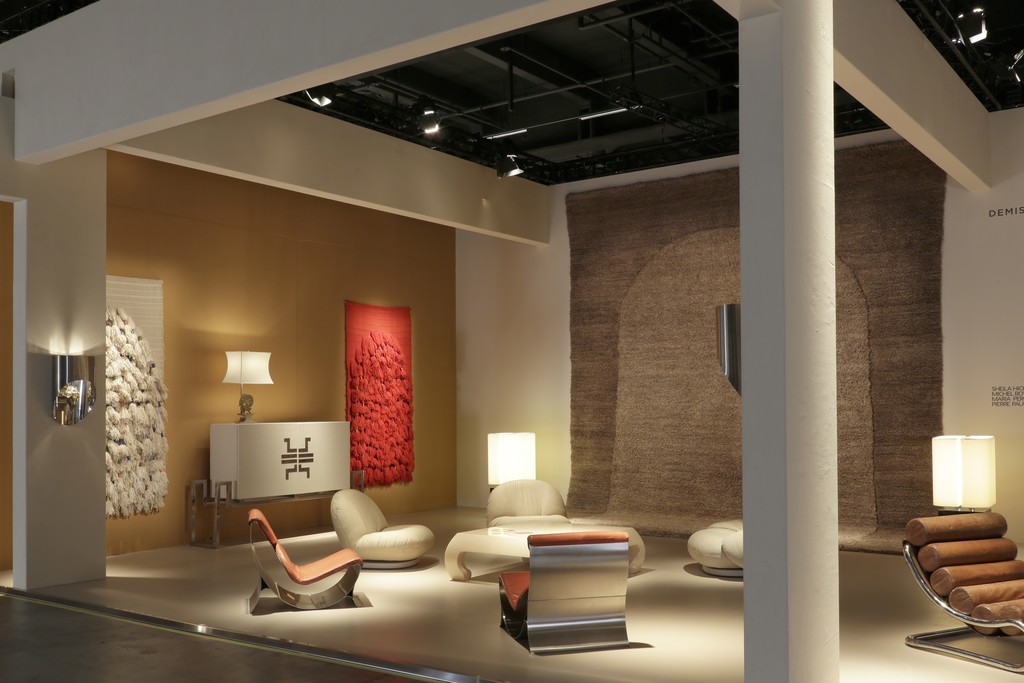 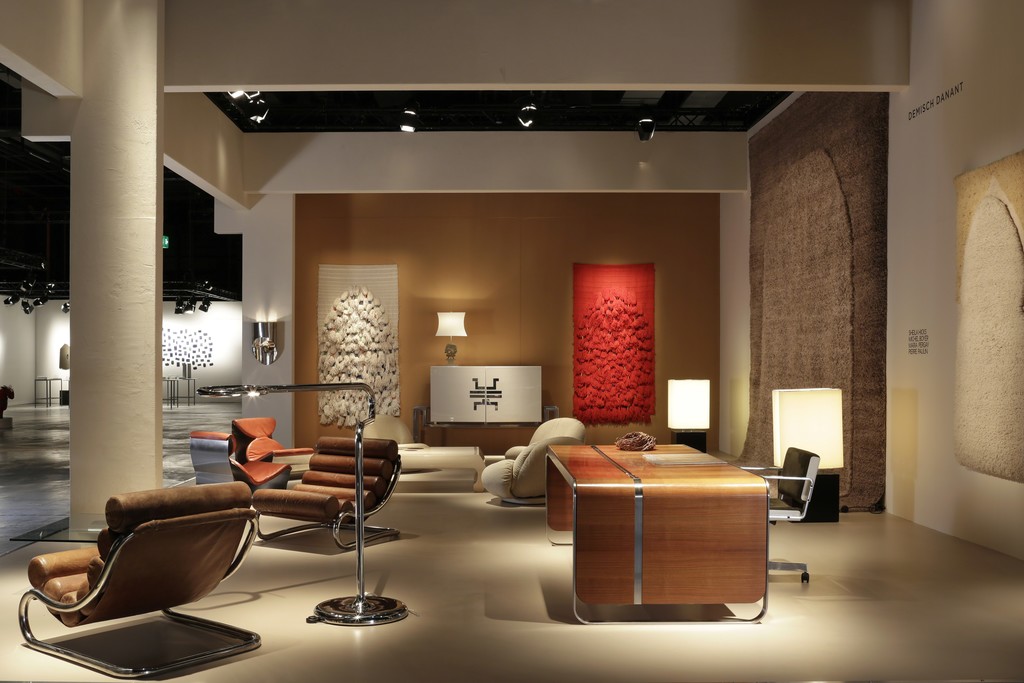 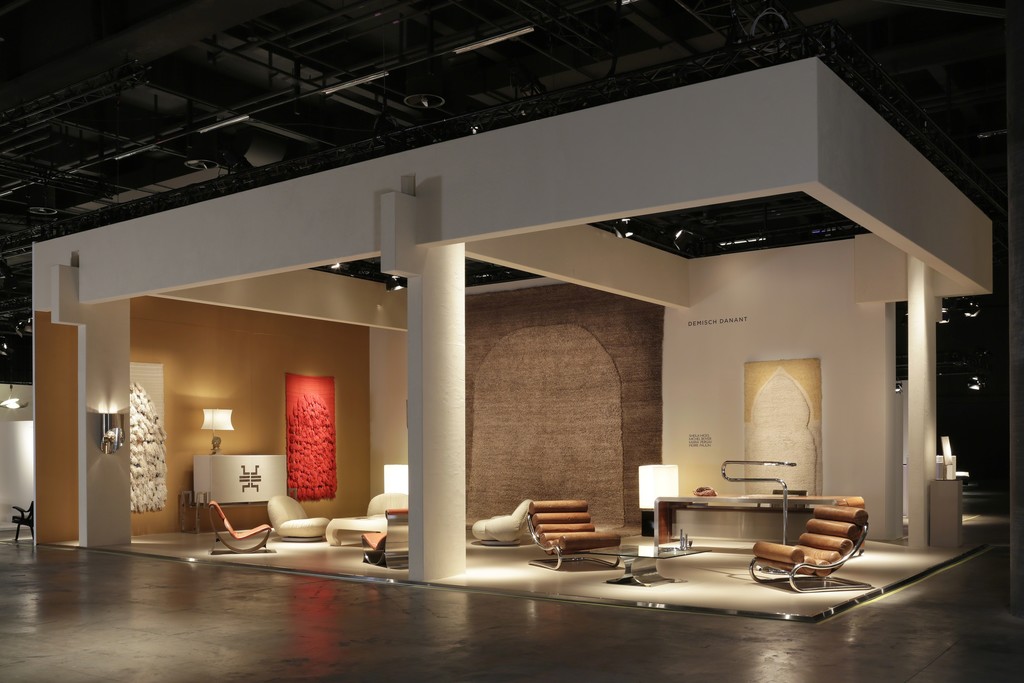 Demisch Danant is pleased to announce that it will present Radical Rabat: Nomadic French Style of the 1970s in its stand (G12) at Design Miami/Basel, from June 16 through 21, 2015. The exhibition aims to capture the essence of French design of the 1970s, a period in which designers were particularly influenced by the art, craft, architecture, and nomadic cultures of the Arab world. Radical Rabat brings together rare and important works by Sheila Hicks, Michel Boyer, Maria Pergay, and Pierre Paulin – creators who drew inspiration from both the traditions and international cosmopolitan scenes of such places as Morocco, Algeria, and Tunisia.

In the aftermath of the revolutionary and politicized late 1960s, French designers sought to create unabashedly experimental forms that encapsulated the sensuality and casual elegance of a new decade. As the 1970s unfolded, they became increasingly peripatetic, traveling and working in the Middle East, and immersing themselves in Arab influences. French designers of the 70s began experimenting with longstanding craft traditions beyond the confines of Europe, and referenced the worldliness of the radical chic jet set exploring exotic locales. Low lounge seating and more amorphous forms, combined with new materials and heavy textures, came to the fore and began to symbolize an iconoclastic glamour.

Radical Rabat draws its title and inspiration from Sheila Hicks’ 1971 exhibition Le Tapis Mural at Galerie National de Bab Rouah (Moroccan National Art Gallery) in Rabat, Morocco’s fourth largest city. Recalling the way in which Hicks transformed the museum’s historic interiors with thirty-one new wall rugs made using traditional Moroccan techniques, Demisch Danant will present its exhibition in a Moroccan-influenced living environment including wall works by Hicks.
Since the late 1950s, Sheila Hicks has traveled the globe observing the indigenous weaving techniques that inform her multidisciplinary practice. In the late 1960s and 1970s, she created highly textural, often colorful “Prayer Rugs” inspired by Moroccan and South American weaving traditions. Four of the artist’s “Prayer Rugs” will be on view in Radical Rabat, including a monumental Moroccan-inspired work that rises over eighteen feet high. These iconic objects will be mounted on walls painted with pure pigment interior paints from a collection the artist has developed in collaboration with Demisch Danant.

In the 1970s, Michel Boyer received several landmark interior design commissions that epitomized the highest achievements of French style in that period. Boyer utilized such new materials as molded fiberglass and stainless steel to render new forms. Radical Rabat includes a unique Boyer desk designed in 1970 for Elie de Rothschild’s office at the Rothschild Bank in Paris. An interplay of solids and voids, sleek curved steel and molded wood, make this desk a highlight of Boyer’s career. The exhibition also includes two versions of the designer’s Brasilia Lamp (1974), a marvel of sinuous curves and solid geometry that was designed for the French Ambassador to Brazil.

Maria Pergay presented her first collection of stainless steel furniture in 1968 and is renowned as a pioneer of the material – one of the first figures to apply it to furniture design. A pair of the renowned designer’s curved stainless steel lounge chairs, made in 1970, will be on view in Radical Rabat. Also on view will be rare East Asian-inspired works in lacquered wood that highlight the long-standing influence of historical techniques and Asian influences on Pergay’s oeuvre.

Pierre Paulin created of some of the most iconic seating designs of the 1960s and 1970s. The Pacha Chair (1975), a low-slung, voluptuous lounge chair, evokes the languor of Oriental nobility. The seemingly contradictory combination of relaxed sensuality and high refinement in such objects was a significant trait of French style of the era. A group of four Pacha Chairs will be on view in the exhibition.

Through this selection of works, Demisch Danant invites visitors to explore the influences and cultural factors that defined 1970s French style.

Born in Hastings, Nebraska in 1934, Sheila Hicks has lived and worked in Paris since 1964. After studying fine art at Yale under the tutelage of Josef Albers, Sheila Hicks established herself as one of the most innovative textile artists of the 20th century. Hicks is renowned for her painterly approach to textile design and an ability to craft environments through the unlikely medium of fiber. She has collaborated with prominent architects including Luis Barragán, Ricardo Legorreta and SOM. Her work defies categorization, simultaneously addressing several related mediums including painting, sculpture, design and installation. Hicks’ work is included in such collections as the Metropolitan Museum of Art, New York; Museum of Modern Art, New York; Centre George Pompidou, Paris; and the Art Institute of Chicago.

Pierre Paulin (1927–2009) is perhaps best known for his innovative designs for Artifort of the 1960s– the famed Mushroom Chair (1959), the Ribbon Chair (1965) and the Tongue Chair (1968). He is widely regarded as one of the most significant designers of the 20th century. Though he was clearly influenced by his German roots as well as the work of early modernists, Paulin has said he was greatly inspired by the work of George Nelson and Charles Eames and the significance of the social component of modern design. In 1970, Paulin was invited by the Mobilier National to decorate the private apartments of George Pompidou in the Palais de l’Élysée, and to furnish the office of Francois Mitterand in 1984. Today, Paulin’s designs are found in the collections of major museums across the world such as MoMA in New York, the Musée des Arts Décoratifs in Paris, and London’s Victoria and Albert Museum.

After studying under renowned decorator, André Arbus, Michel Boyer (1935–2010) began his career specializing in office furniture, corporate offices and banks. Boyer utilized the materials of his era and privileged architectural forms, often playing with solids and voids. Boyer established certain standards of 1970s style with designs such as the foam-covered linear chauffeuse– a chair made of metal tubes and rolls of leather– and is well known for his stools in stainless steel and lighting designs of great simplicity. Boyer received many significant commissions of the 1970s, including the Rothschild Bank in Paris (1970), the Hotel PLM Saint-Jacques (1972), the French Embassies in Brasilia (1975) and Washington (1975), and a number of corporate offices. He worked with fashion designers including Lanvin, Dior and Balmain. His private clients included Elie de Rothschild, Liliane Betencourt and Karim Aga Khan.

Born in Moldavia, Maria Pergay (b. 1930) opened her first shop in the Place des Vosges in 1960 and designed small objects in silver and special pieces on commission for fashion houses including Christian Dior and Jacques Heim. In 1968, Maria Pergay presented her first collection of stainless steel furniture at Galerie Maison et Jardin, including the now-iconic Flying Carpet Daybed (1968) and Wave Bench (1968). This seminal exhibition established Pergay as one of the most innovative French furniture designers of her time, a visionary who almost single- handedly transformed stainless steel from a commercial industrial material into a principal component of modern furniture. Pergay has exhibited internationally and has embarked upon significant commissions for Pierre Cardin, The World Trade Center in Brussels, the Royal Family of Saudi Arabia, and other esteemed clients. In her 84th year, after a half-century of creation, Pergay continues to surprise both herself and her collectors.

Demisch Danant was founded in 2005 by Suzanne Demisch and Stephane Danant. The gallery specializes in twentieth century French design with an emphasis on the late 1950s through the 1970s and represents the work of Maria Pergay, Pierre Paulin, Joseph André Motte, Pierre Guariche, Michel Boyer, Philippon & Lecoq and René Jean Caillette. Curated exhibitions on historical work are presented within environments that reference architecture and interiors of the era.

Demisch Danant is dedicated to research and scholarship on French design and has published and authored monographs including, Antoine Philippon and Jacqueline Lecoq and Maria Pergay: Complete Works 1957-2010. Current projects include a comprehensive monograph on seminal designer Joseph André Motte.