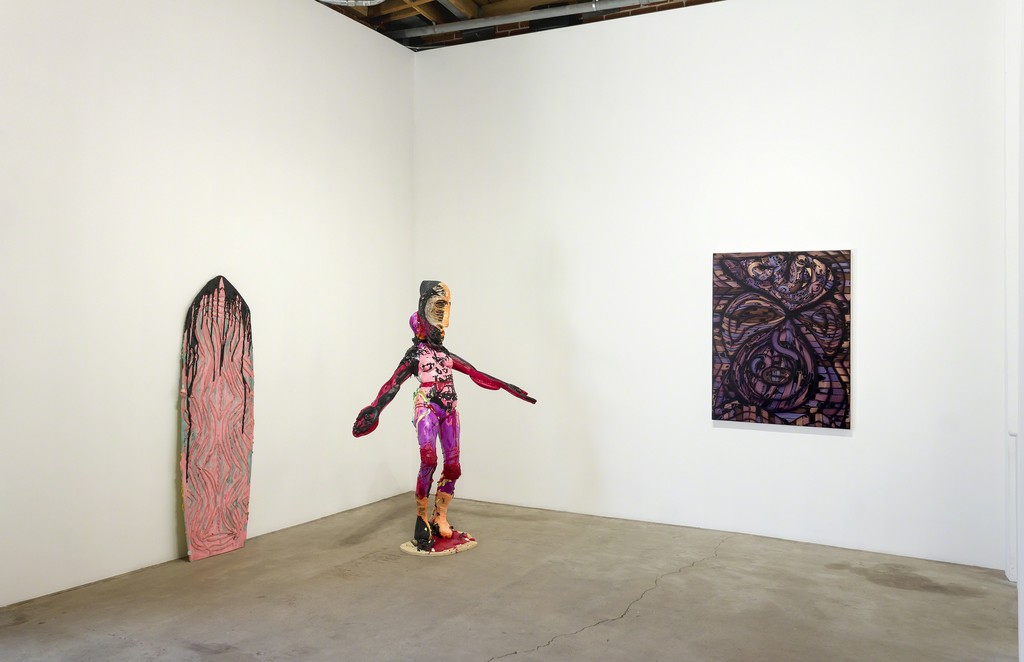 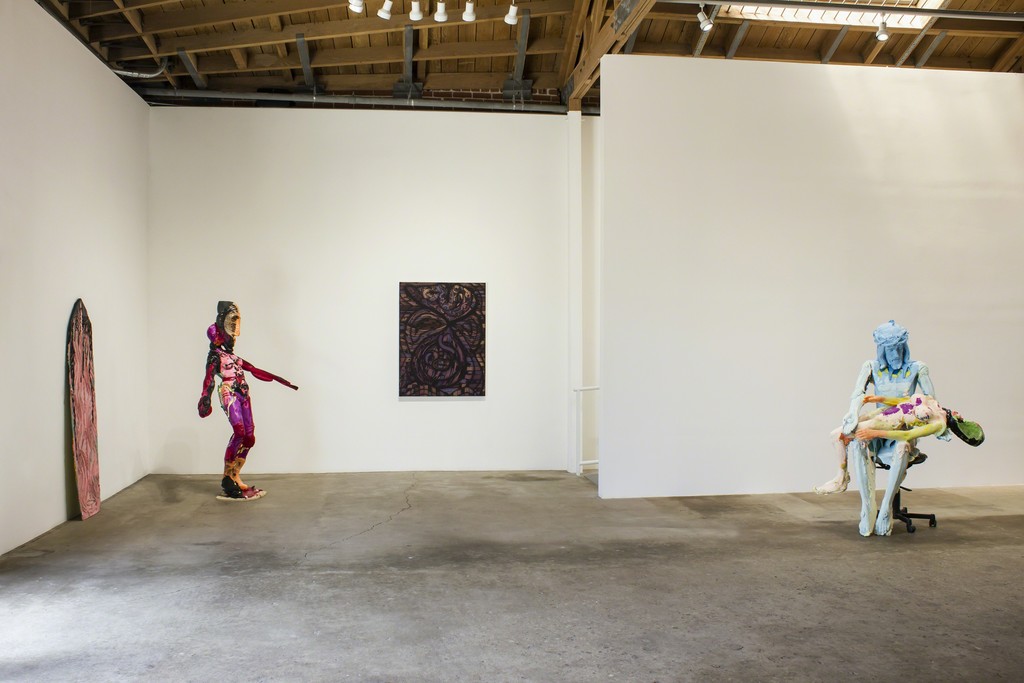 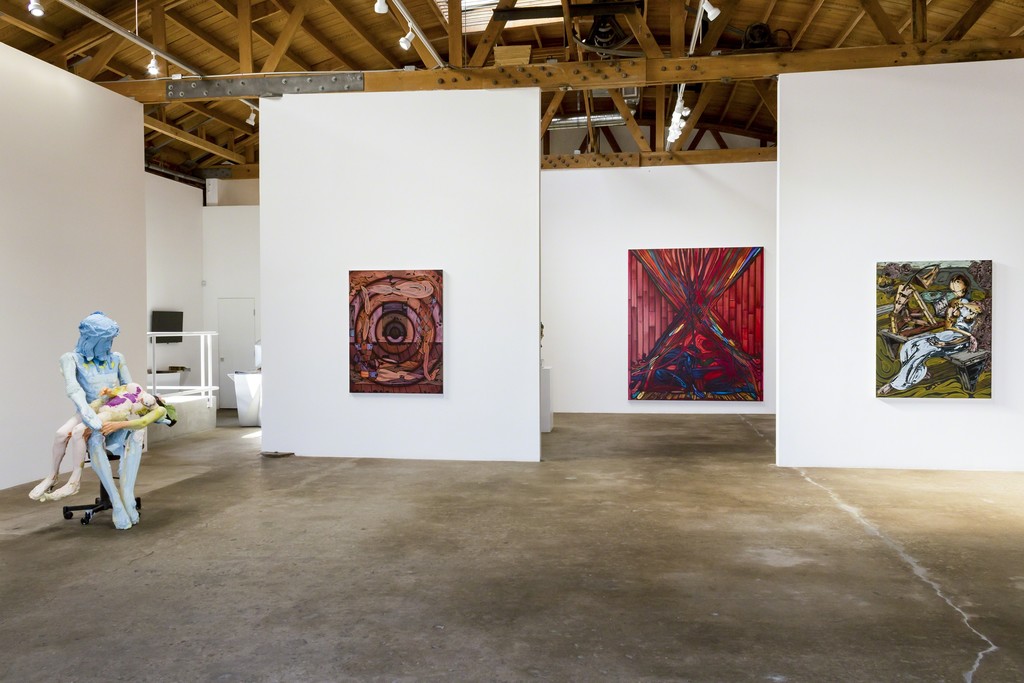 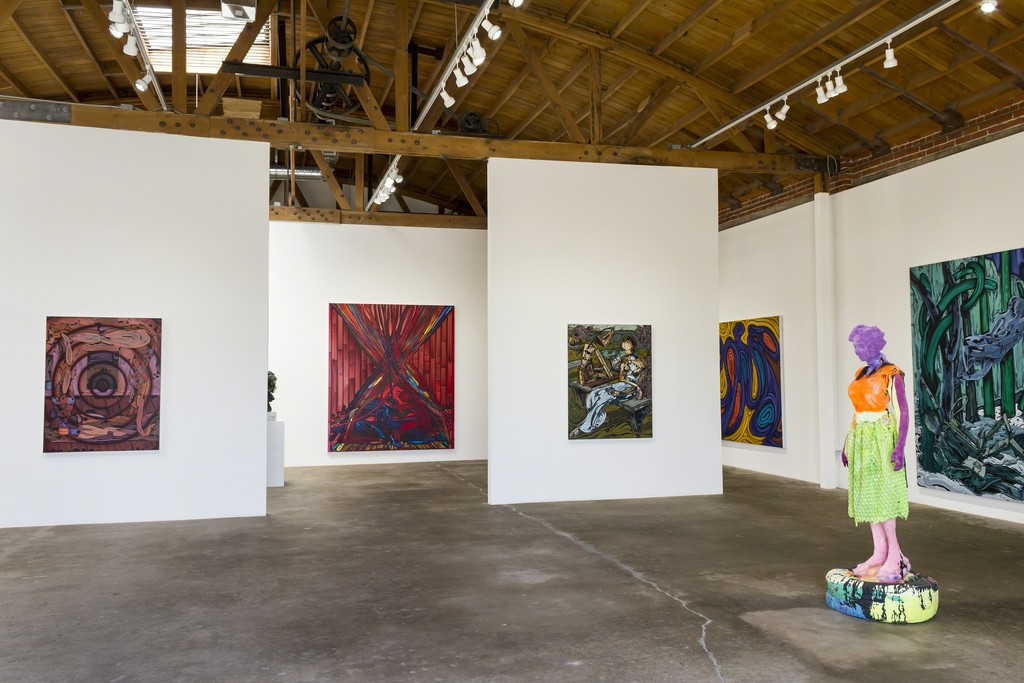 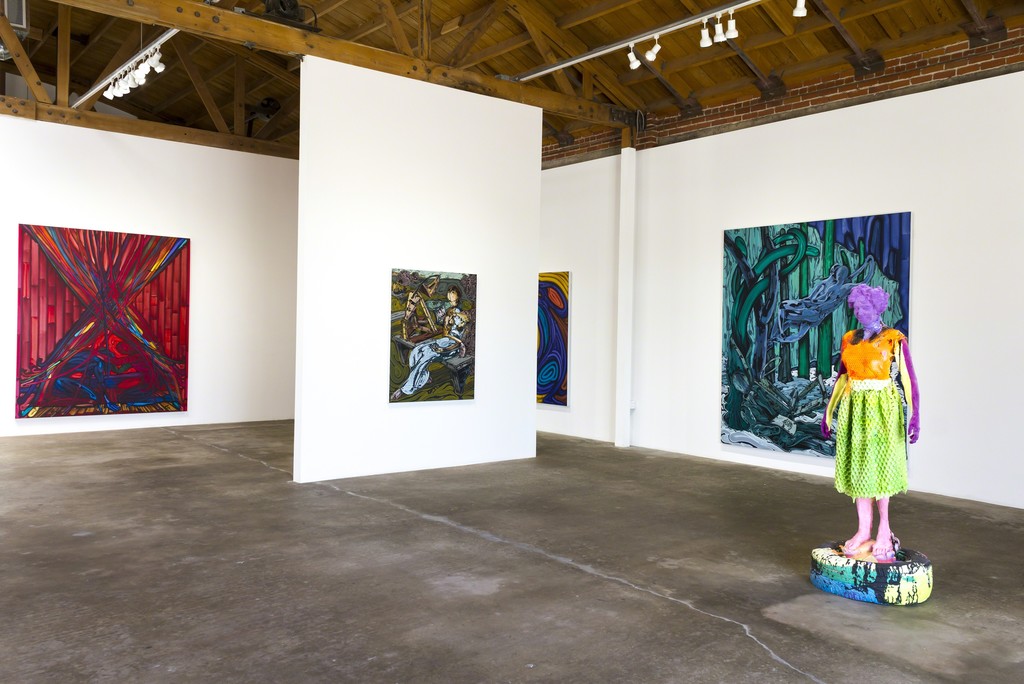 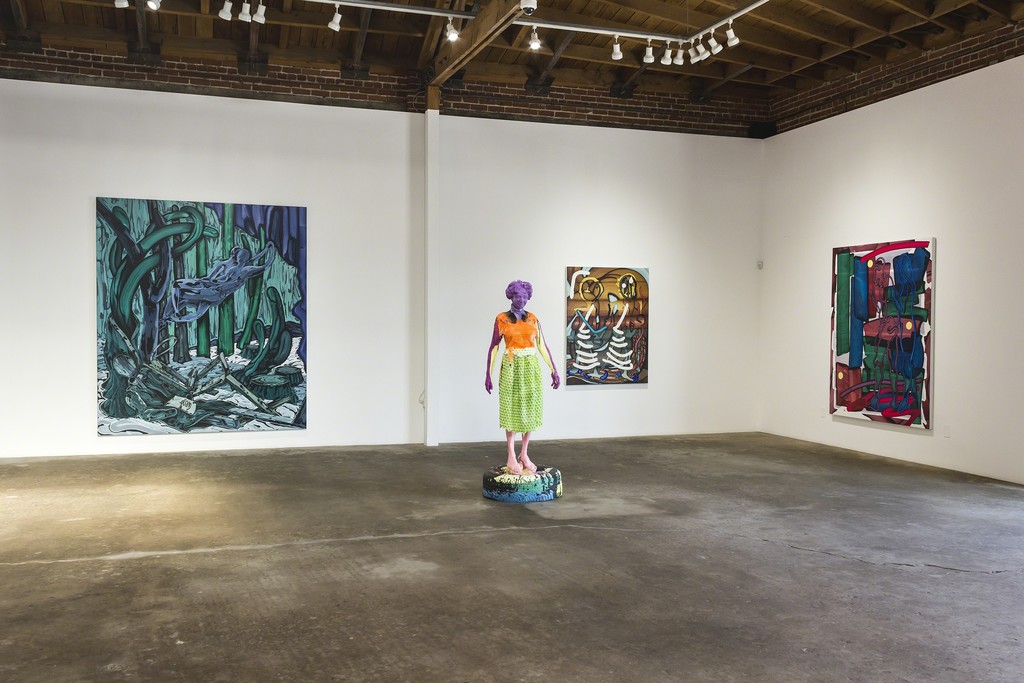 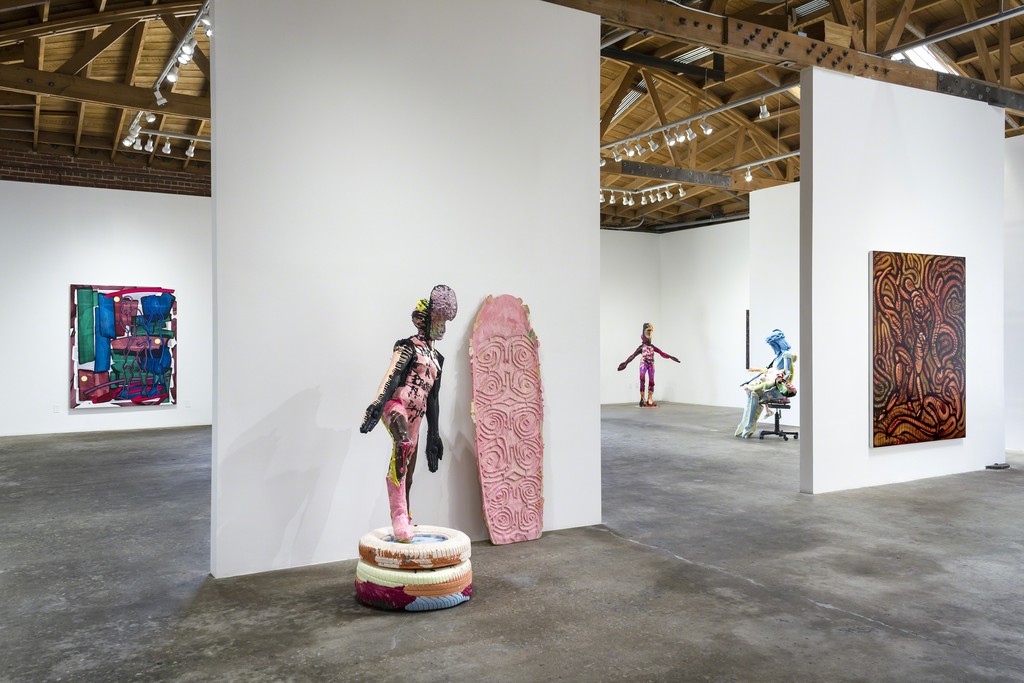 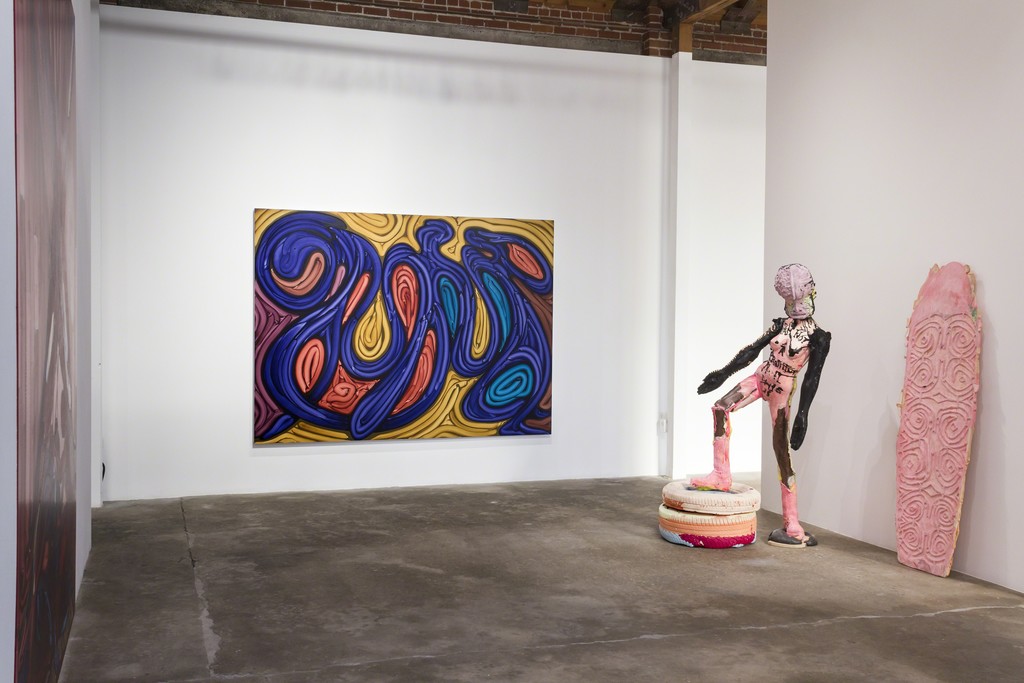 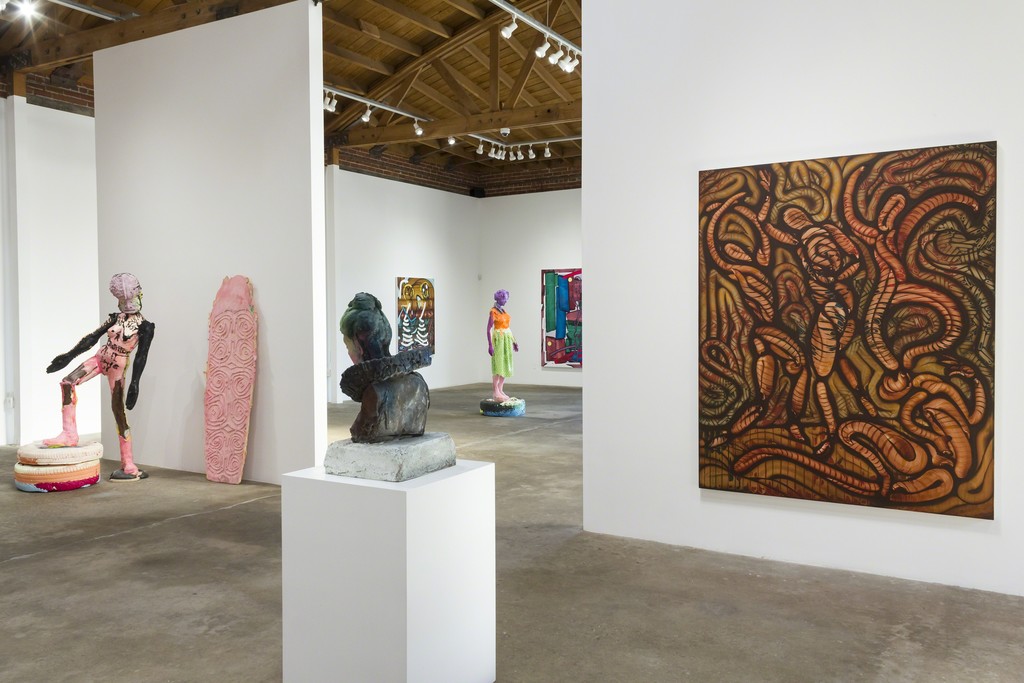 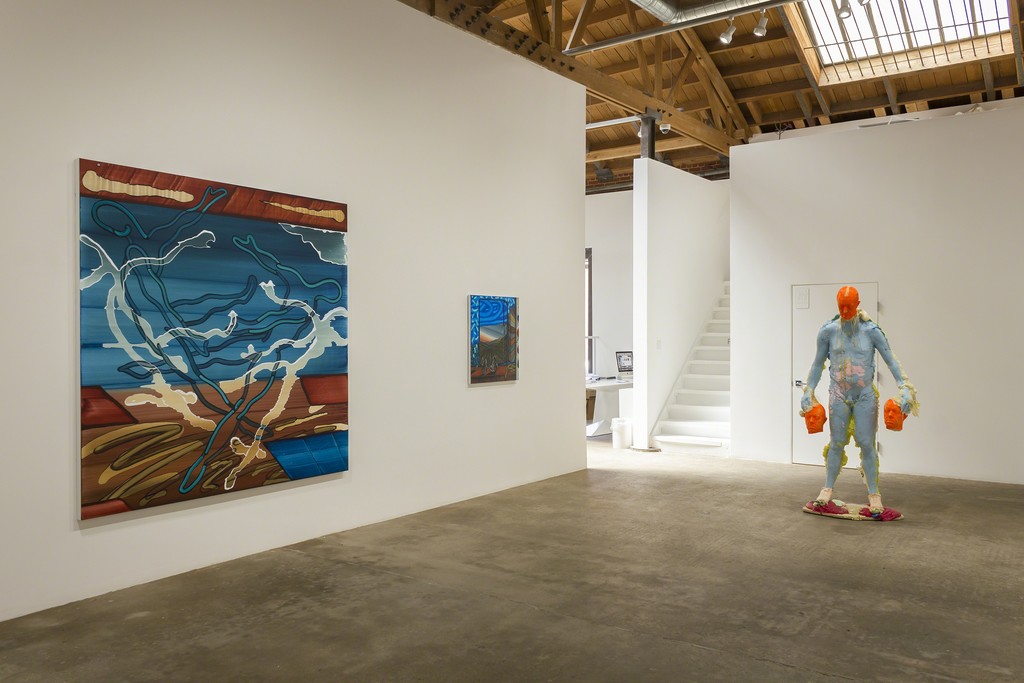 (Los Angeles, CA) - DENK gallery is pleased to present new sculptural works by internationally acclaimed Dutch artist Folkert de Jong - his first solo exhibition in LA in over a decade - and paintings by Los Angeles-based artist Nathan Redwood. Both DENK debuts by gallery represented artists, Cathedra, by de Jong, and After Tin Man, by Redwood, were developed for the gallery as dual solo projects to be installed in tandem, activating each artist's unique work and practice through a contingent context.

Both de Jong and Redwood push the limits of their respective media through intuited experimentation and process-based practices. De Jong's theatrical take on figuration tends towards the gestural and painterly, while Redwood's technical facility with paint treads unexpectedly into sculptural terrain. Both engage figuration on the edge of abstraction, encouraging its margins to slip surreptitiously into ambiguous thematic and symbolic unknowns.

De Jong creates monumental effigies to cultural distortions ranging from the grotesque to the macabre. Hyperbolizing iconic figures from silver screen era Hollywood starlets to High Renaissance depictions of Jesus Christ, his content is promiscuously drawn from art historical and popular cultural references alike. De Jong's counterintuitive handling of large-scale sculpture is realized through the use of high tech chemical compounds like expanded polystyrene and polyurethane. These light porous materials are clad in expressive emissions of paint and also reveal their various manufacturer's proprietary trademark colors in bubblegum pink, bright blue, and neon green. The garish visual impact of his work often runs counter to the darkness of its actual content and tenor. De Jong's use of these materials is a deliberate commentary on the bleak industrialization of culture in the age of mass consumption, and the inevitable end result: a disposable and flippant degradation of humanity.

Redwood, on the other hand, creates dynamic two-dimensional works through a unique interplay of reductive and additive handling, pulling tactility and dimension from flat planar fields. His paintings are dramatic and at times cataclysmic, invoking transformation and change through the palpable movement of a material in flux. Driven by their process, his works are informed by chance and intuitive choices, as his formal compositions are led from within the paint rather than imposed from without.

Paired together for the first time, these contemporaries from two different continents produce strikingly different though intersecting works that consider both the role of the figure and the current valence of representational modalities in contemporary art. Though entirely disparate, their work shares a tendency towards iconoclasm, stylization, cultural commentary, humor, and irreverent experimental bravado.

In Cathedra, de Jong explores his interest in the formal figure as a vehicle for cultural content and commentary. Looking to the long-held historical power and function of representation in art, de Jong's subversive re-appropriations of its imagery, like his re-envisioning of Michelangelo's Pietà, expose the viscera of reality's shortcomings when placed at the altar of the ideal. His re-imaginings are always cast by something vaguely anarchistic and destructive, tableaux that read as morbid necromancy or undead pantomime. These reanimated forms culled from history reveal an anachronistic exhaustion and cultural impoverishment in the contemporary tense. Invoking both the potential of fetishism and ritual in representation, de Jong treats the body as an ambivalent locus - a site where the power and failure of the ideal collide.

In After Tin Man, Redwood considers the hierarchy of figurative painting as a subject. Having previously explored the dynamic potential of portraiture, landscape, and still life, Redwood
embraces genre painting or scenes from everyday life, imagining a suite of large-scale figurative works suggesting a time to come after an unlikely culprit. In these paintings, grounded in a myriad of historical references, the figure emerges at times forcefully and at others tentatively from within abstract ﬁelds. Redwood considers a symbolic alternative to an armor-clad character operating in the absence of a heart. The work emerges as a nostalgic gesture in the face of current cultural and social upheaval: togetherness, humor, cooperation, and human emotion are on display as an antidote to disconnection. Simultaneously, the potential for the opposite is discernible, as our modern human isolation is shared with this protagonist composed of
brush strokes and previously inert materials. Shifting deftly between interior and exterior
compositional states, the works are narrative in their suggestion of past and present action but remain uncertain evocative propositions rather than compulsory plots.

ABOUT FOLKERT DE JONG
Based in Amsterdam, de Jong is best known for his evocative sculptural installations and tableaux that combine figurative elements with provocative mise-en-scènes. His vignettes borrow from theatrical principles to stage eerie narrative fragments, often bordering on the tragicomic and grotesque. By working with industrial materials such as styrofoam and polyurethane, as well as with more traditional sculptural media like bronze, de Jong deliberately combines high and low cultural references and materials in quasi-allegorical mashups. His work often invokes the art historical alongside contemporary political issues and topical interests, delivered with a feeling of post-apocalyptic futurity.

ABOUT NATHAN REDWOOD Redwood is known for his surreal large scale paintings composed from a foundation of transparent brushwork parodying both modern and contemporary modes of painting. Redwood's paintings channel the dynamic energy of gestural abstraction while remaining within a representational space. Though referencing familiar landscape and portraiture formats, Redwood distorts their subjects, allowing spontaneous "accidents" and anomalies to thrive. Central to his process is a reductive siphoning of gestures, brushstrokes, and contours, as the making of the work itself defines the trajectory of the narrative. Physical properties are counterintuitively transformed in the paintings, as bodies and landscapes liquefy into anamorphic distortions. The artist stages these deliberate visual tensions by contrasting areas of detailed rendering with expanded fields of graphic "flatness," and intensified color, both reminiscent of print media. His works reference disparate periods from the Baroque and Mannerist, to the Abstract Expressionists and Surrealists.

The artist attended the School of the Art Institute of Chicago and the Skowhegan School of Painting & Sculpture in Maine. He is represented in several prominent private and public collections and has exhibited internationally. His works have shown at the Museum of Contemporary Art, Los Angeles, San Jose Museum of Art, California, TENT Centrum Beeldende Kunst, Holland, Torrance Art Museum, California, University Art Museum, California State University, Long Beach, and Neuberger Museum of Art, New York, among many other institutions.
Redwood's work is currently on view in Ruptures and Remnants: Selections from the Permanent Collection at the Cornell Fine Arts Museum, Rollins College, Winter Park, Florida, January 20, 2018 - December 31, 2020.