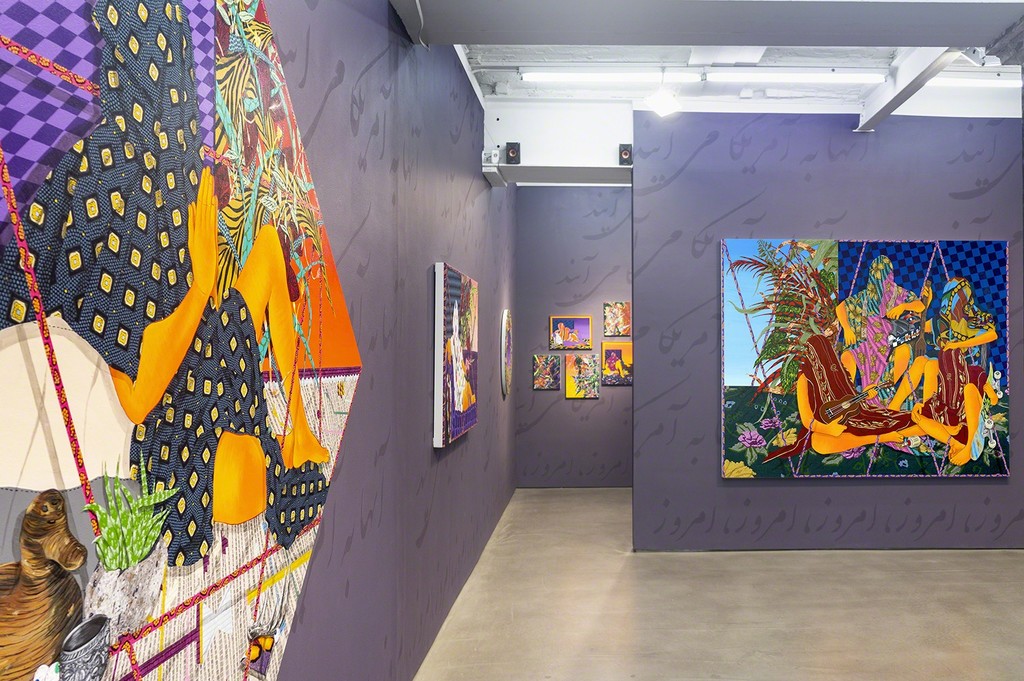 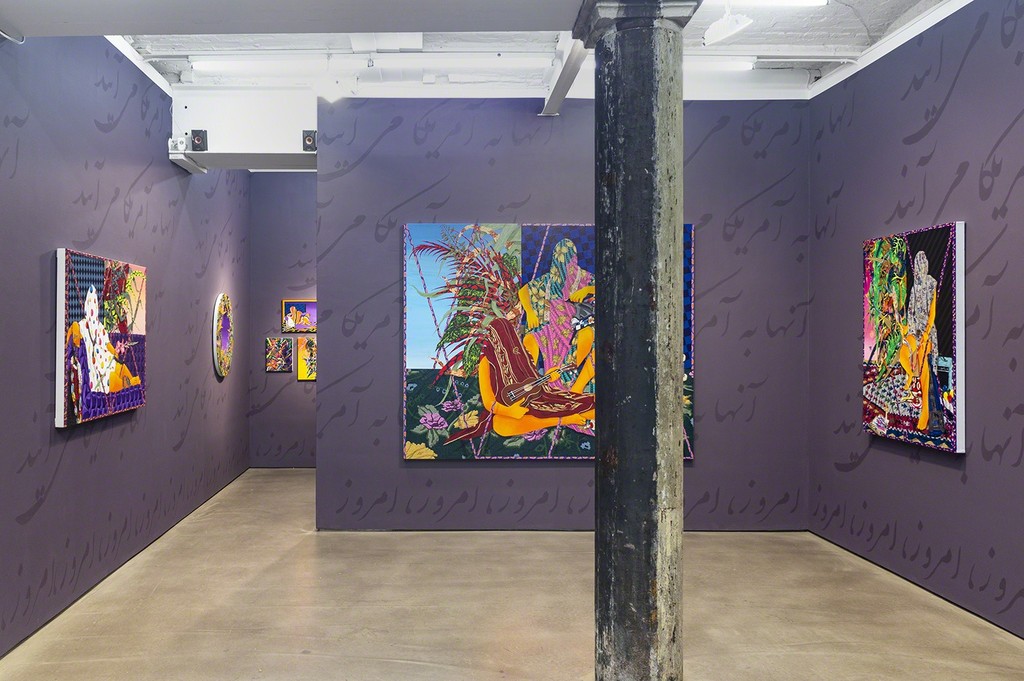 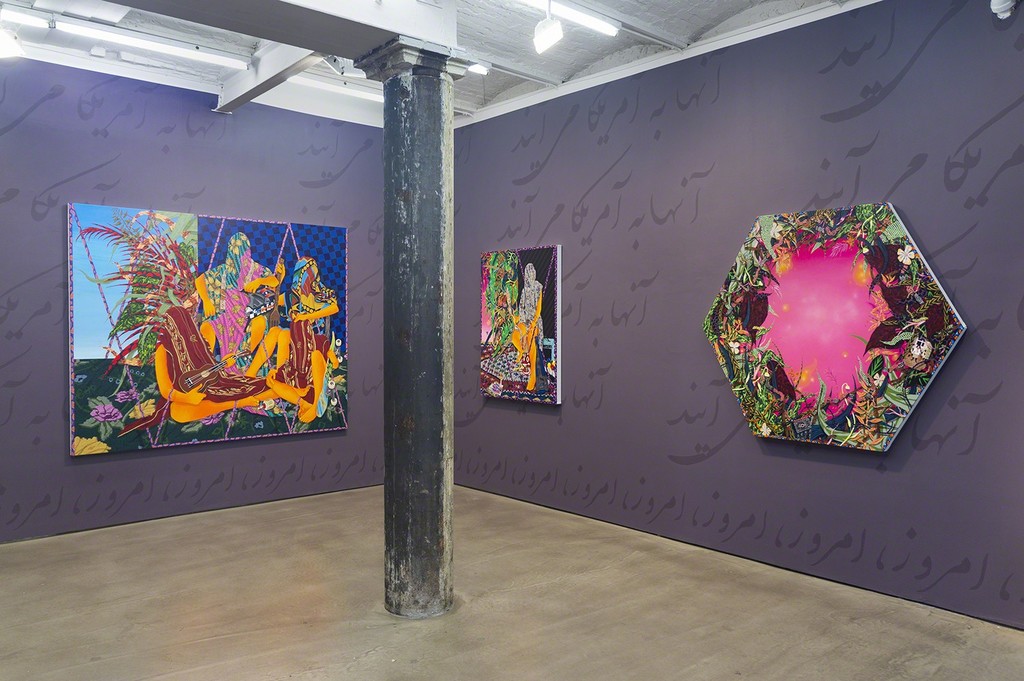 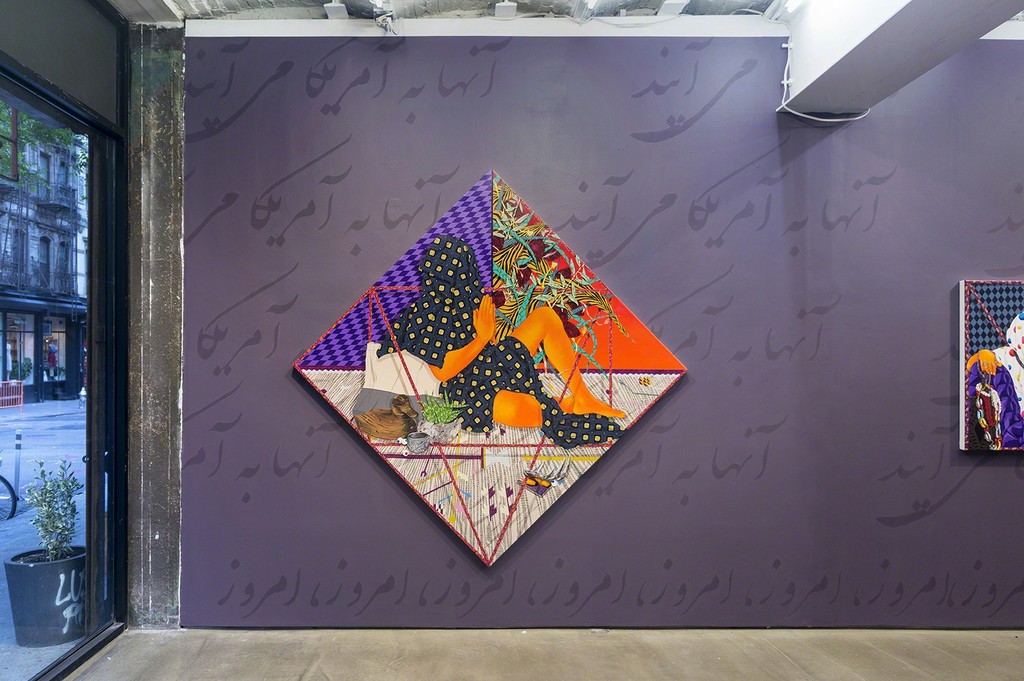 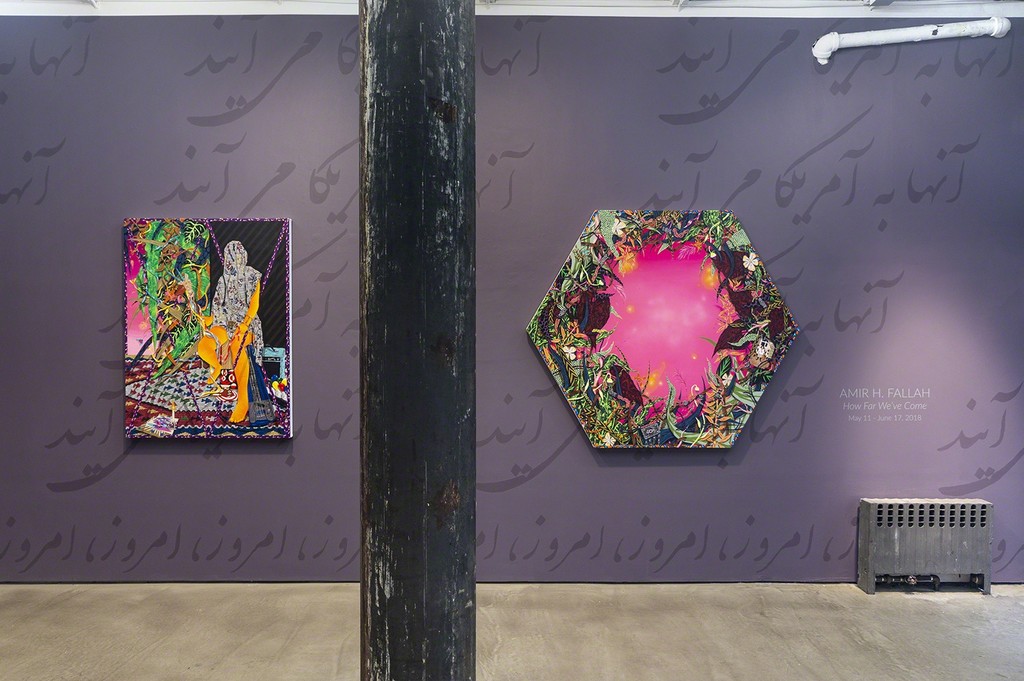 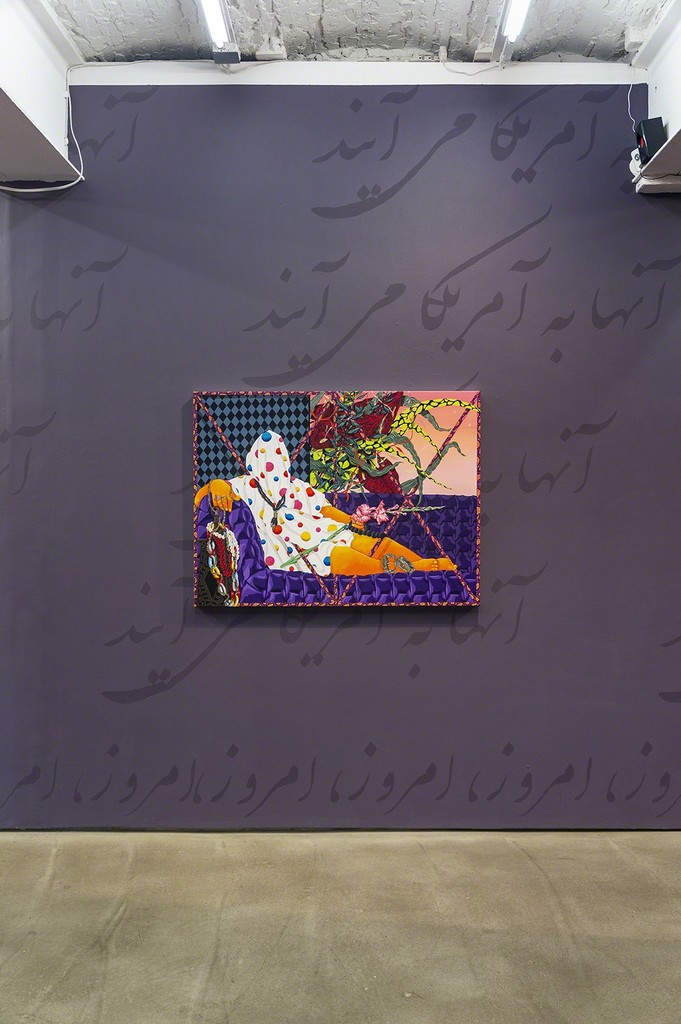 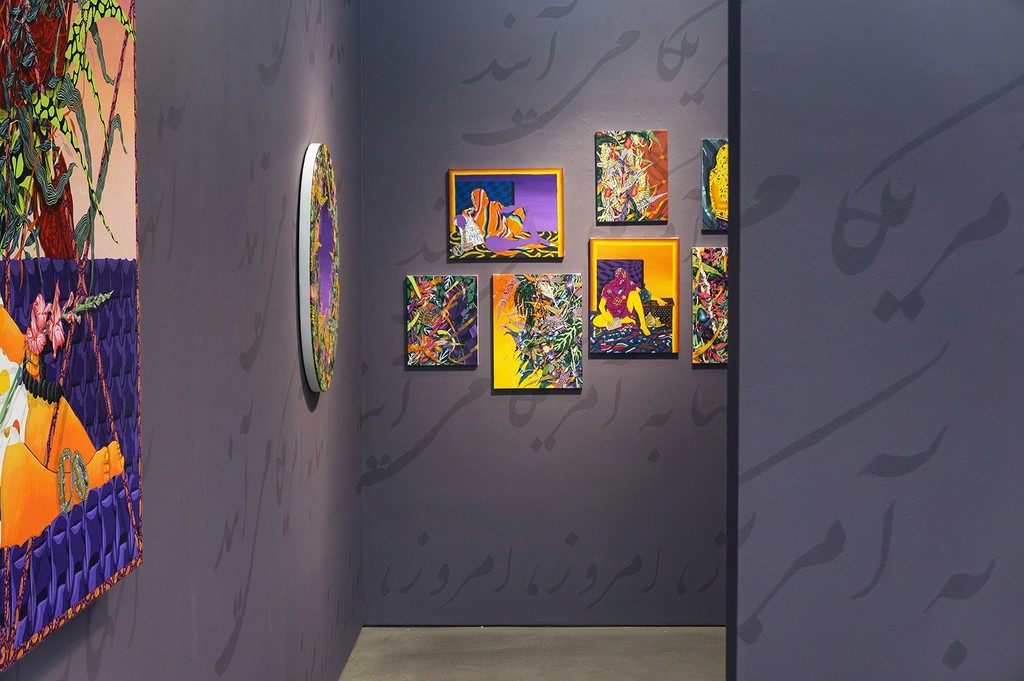 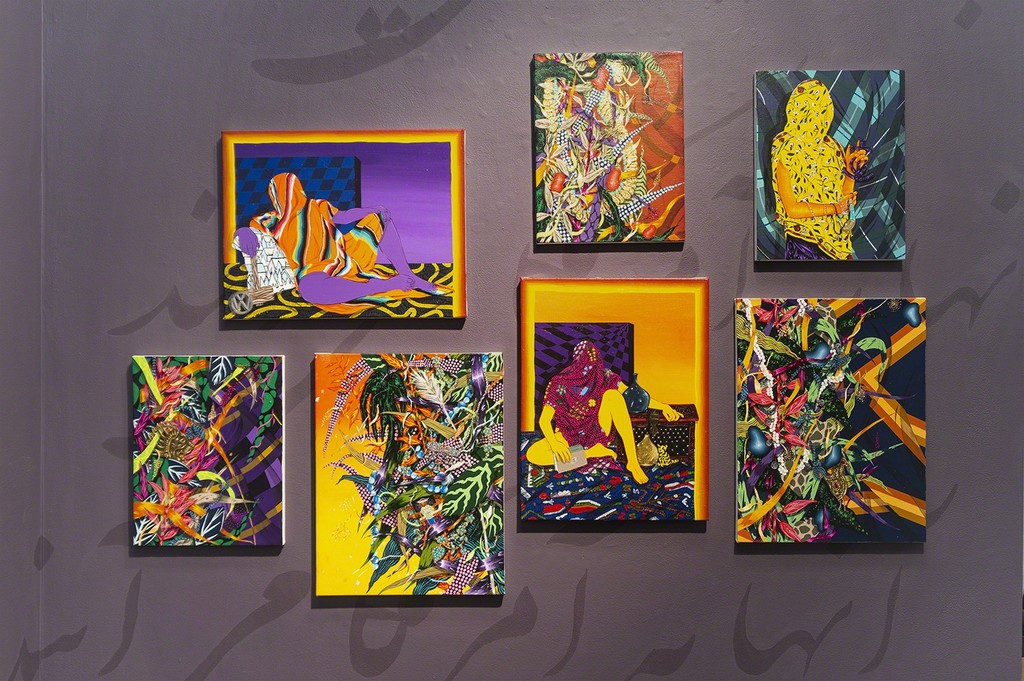 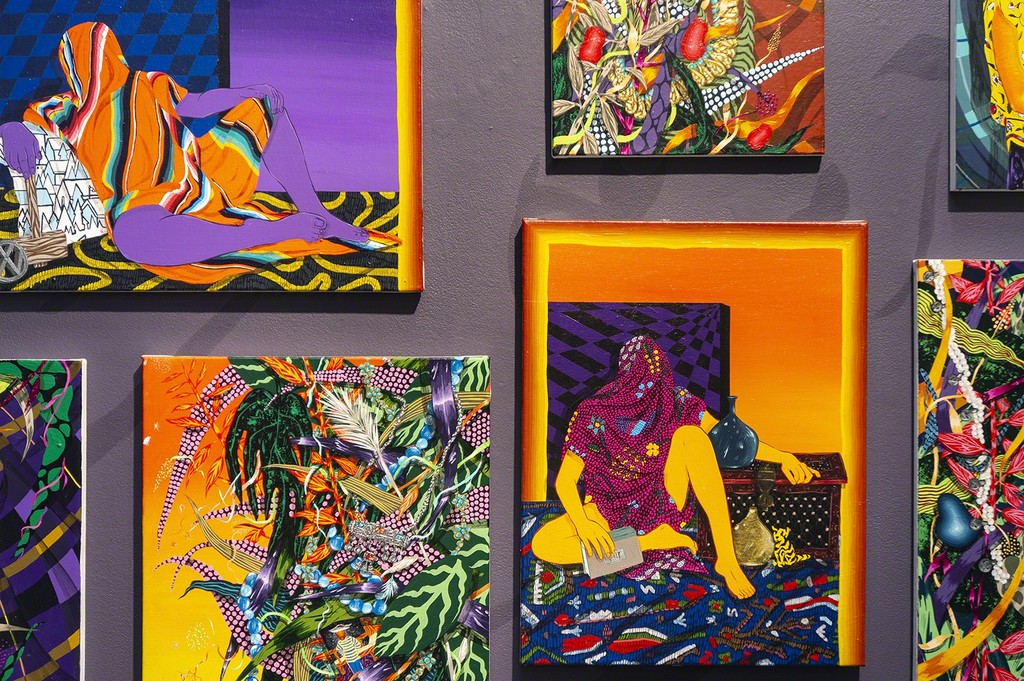 Denny Gallery is pleased to announce How Far We’ve Come, a solo exhibition by Amir H. Fallah on view from May 11th to June 17th, 2018. This is his first solo exhibition with Denny Gallery following his participation in the group show “The Unhomely” in summer 2017 and in the gallery’s booth at UNTITLED San Francisco in January 2018.

How Far We’ve Come is an exhibition of Fallah’s ongoing series of portraits of immigrants from his community in Los Angeles. His work investigates the complexities of belonging and otherness in the very place one calls home. He paints his subjects’ bodies surrounded by their possessions and domestic environs, while disguising their skin colors and features. Fallah’s work is of analogously global ancestry, influenced by the pattern and detail of Persian miniatures, the portrayals of class and domestic life of 17th century Dutch art, and the brashness and saturation of American visual culture. He often uses shaped canvases, referring to portraits in various contexts, such as a locket or stained glass. The exhibition incorporates the artist’s interest in installation practices and thus will include a sound piece and wall drawing in addition to his paintings. The sound piece, “What It Means to be an American,” is a half hour long sequence of voices speaking about their experiences living in the United States as an immigrant or part of an immigrant family. These clips are from his interviews with the subjects of many of the portraits in the exhibitions, and others.

The title of the show, “How Far We’ve Come,” situates us at point of progress, yet still implies the unwritten, “yet still how far to go.” This is an expression often used when discussing civil rights issues in the United States. In further idiomatic play, the artist will paint the walls of the gallery with the Farsi translation of the lyrics of “[Coming to] America” by Neil Diamond released in 1980. The idealistic song celebrates America as a land of immigrants. Its tone sounds strange to a contemporary listener, as the current regime has turned immigration into a dangerous vulnerability that needs to be fixed. The song resonates with the show’s title “How Far We’ve Come,” as it touches on the long and tumultuous obstacles that immigrants face to come to the United States. Fallah himself is an immigrant who came to the United States from Iran (via Turkey) at a young age. By making work about other immigrants, Fallah responds to the interrogation he personally faces about his own American identity- explicitly so at border crossings and implicitly in everyday interactions in a predominantly white country.

Amir H. Fallah (b. 1979, Tehran) received his BFA in Fine Art and Painting at the Maryland Institute College of Art in 2001, and his MFA in Painting at the University of California, Los Angeles in 2005. He has exhibited extensively in solo and group exhibitions across the United States, including solo presentations at Shulamit Nazarian, Los Angeles (2017); the Schneider Museum, Ashland, OR (2017); the San Diego Art Institute, CA (2017); and the Nerman Museum of Contemporary Art, Overland, KS (2015); and abroad at The Third Line, Dubai (2005, 2007, 2009, 2013, 2017) and the 9th Sharjah Biennial (2009). He has forthcoming exhibitions at MoCA Tucson (2018 and 2020). In 2017, the artist received a California Community Foundation Grant; and in 2015, a Joan Mitchell Foundation Painters and Sculptors Grant. Fallah lives and works in Los Angeles.

Please join us for an opening reception for the artist Amir H. Fallah on Friday, May 11th, from 6 to 8 p.m. Denny Gallery is located at 261 Broome Street in New York City. The hours are Tuesday to Sunday, 11 a.m. to 6 p.m. For further information, contact Elizabeth Denny or Robert Dimin at 212-226-6537 or by email at [email protected] or [email protected].