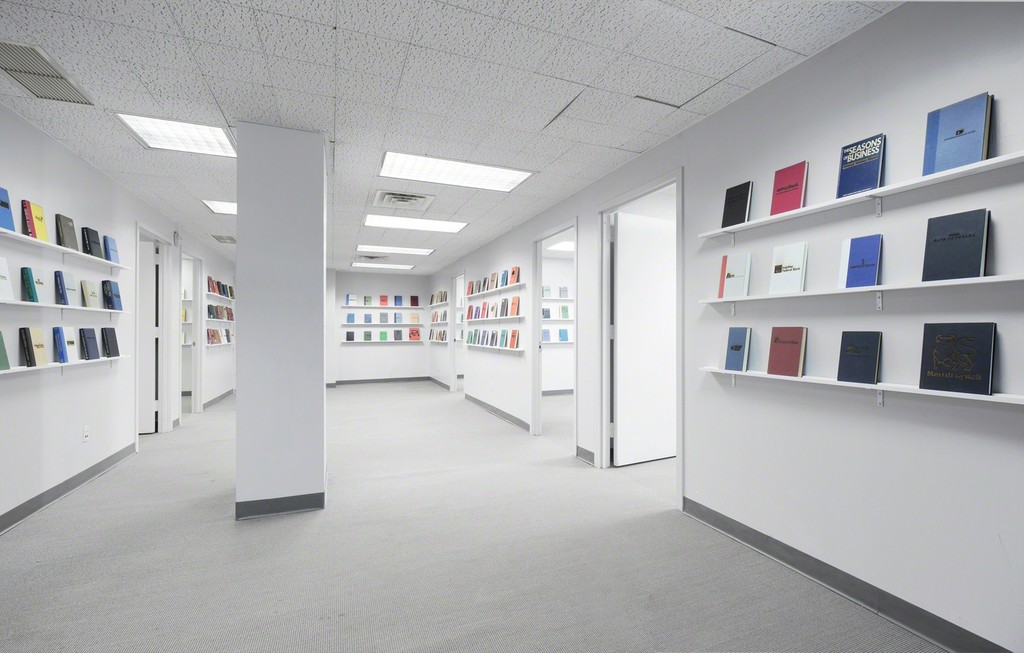 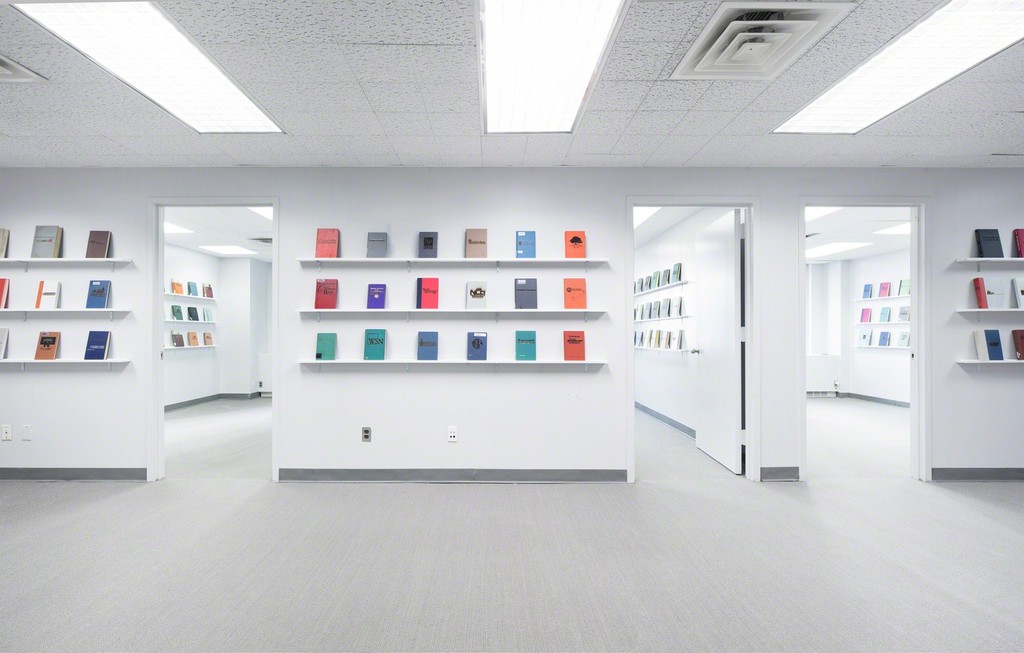 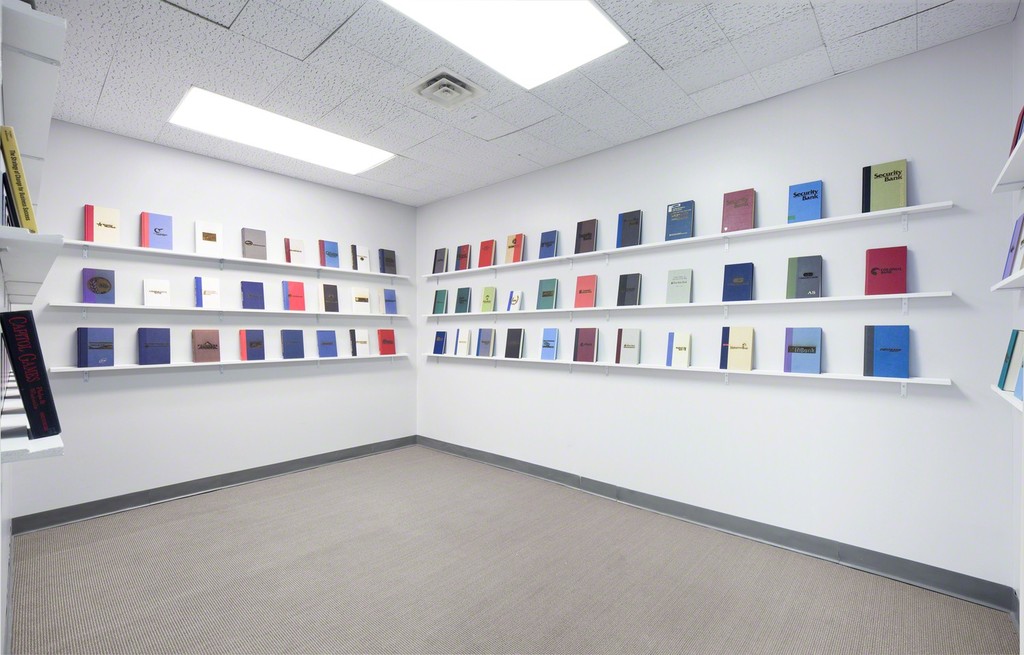 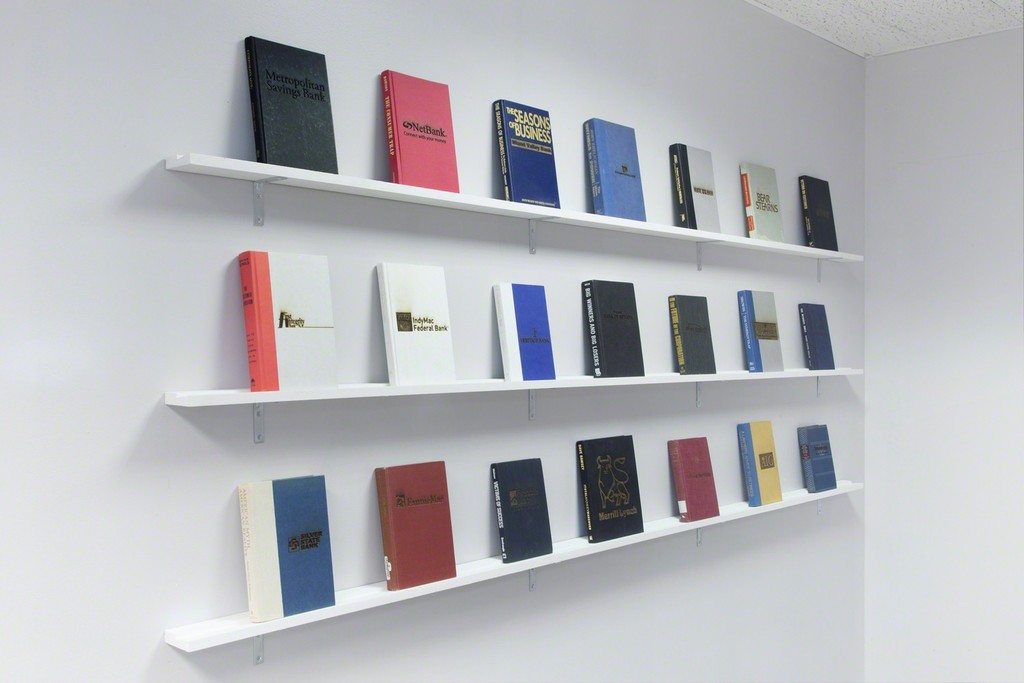 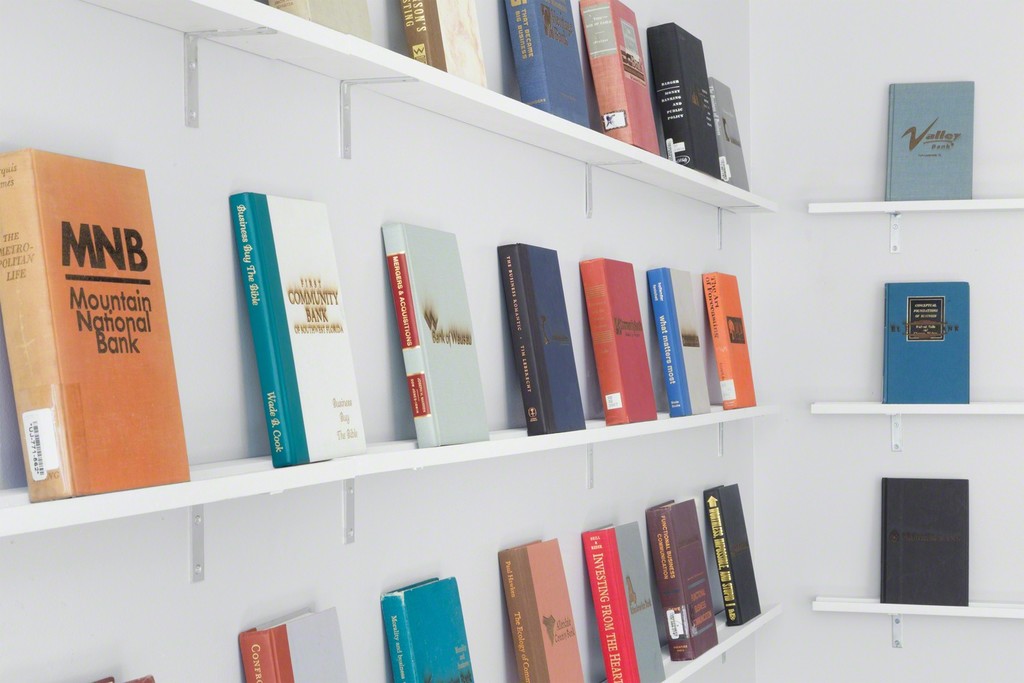 Denny Gallery and Time Equities Inc Art-in-Buildings are pleased to announce FDIC Insured by Michael Mandiberg, an investigation into the erased visual identities of failed banks. The exhibition will take place at the Art-in-Buildings Financial District Project Space at 40 Rector Street, New York, from September 15th to December 15th, 2016.
FDIC Insured is a body of work Michael Mandiberg began in 2008 during the Great Recession after noticing that when a bank failed, the FDIC and the acquiring institution erased the failed bank’s visual identity from the internet. Mandiberg began collecting their logos in advance of their public erasure and using a laser-cutter to inscribe
Michael Mandiberg, Corn Belt Bank and Trust, Pittsfield, IL, February 13, 2009
them into the covers of cast off investment guidebooks, with titles such as Total Money Makeover, Investing by the Stars, and Nothing Down: How to Buy Real Estate with Little or No Money Down. The project now encompasses the abandoned logos of the 527 banks that have failed to date, each emblazoned on a book. In 2010, an in-progress version the work was exhibited at Pacific Northwest College of Art’s Feldman Gallery in Portland, Oregon. Link Art Center and Abandon Normal Devices (ABD) have commissioned a book and web archive that accompany the installation and serve as the exhibition catalog.
The exhibition of FDIC Insured will open on September 15th, the anniversary of the Lehman Brothers bankruptcy filing. Visitors will enter through the building’s quintessentially corporate lobby, take an elevator to the 15th floor, and enter a recently vacated office suite, where they will encounter Mandiberg’s installation and the ghosts of hundreds of failed banks. Throughout the run of the exhibition, Mandiberg will present a series of programs related to current issues in the financial system, including artist talks, video screenings, and panel discussions. These are scheduled for October 4th, October 22nd, and November 15th.
Michael Mandiberg was born in 1977 in Detroit, Michigan, and lives and works in Brooklyn. Mandiberg’s projects have been presented at The Museum of Modern Art (MoMA), The New Museum, Postmasters Gallery, Denny Gallery, Arizona State University Museum + Library, Eyebeam, Ars Electronica, Jeu De Paume, Plug.in, Transmediale, and ZKM. His work has been written about widely, including Artforum, Art in America, ARTnews, The New York Times, and The Wall Street Journal. Mandiberg is Professor of Media Culture at the College of Staten Island/CUNY and Doctoral Faculty at the CUNY Graduate Center. In 2016, Mandiberg has been awarded a Los Angeles County Museum of Art (LACMA) Art + Technology Lab Grant and a MacDowell Colony Fellowship.
Please join us for an opening reception for the artist Michael Mandiberg on Thursday, September 15th, from 6 to 8 p.m. The Art-in-Buildings Financial District Project Space is located at 40 Rector Street, Suite 1500, New York, NY. The exhibition will be open to the public during special events, on Fridays and Saturdays 1-5 p.m. and by appointment. Please bring photo I.D. to check in at reception. For further information or to make an appointment,contact Elizabeth Denny or Robert Dimin at 212-226-6537 or by email at [email protected] or [email protected].