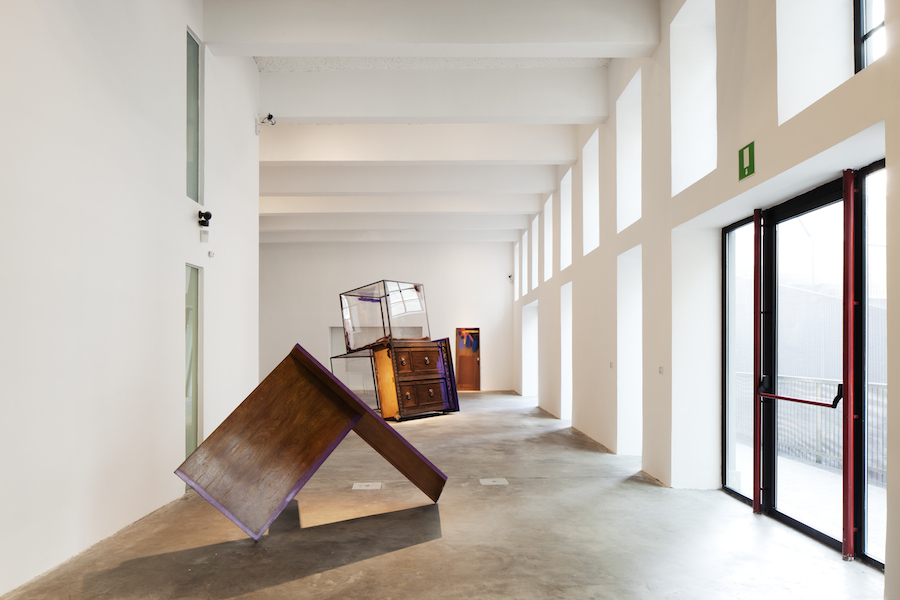 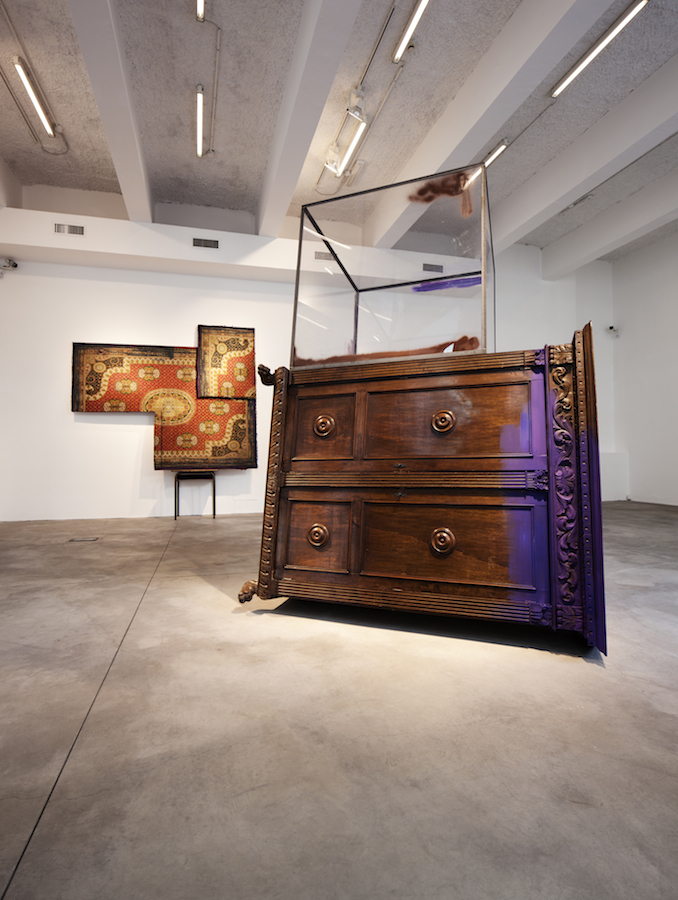 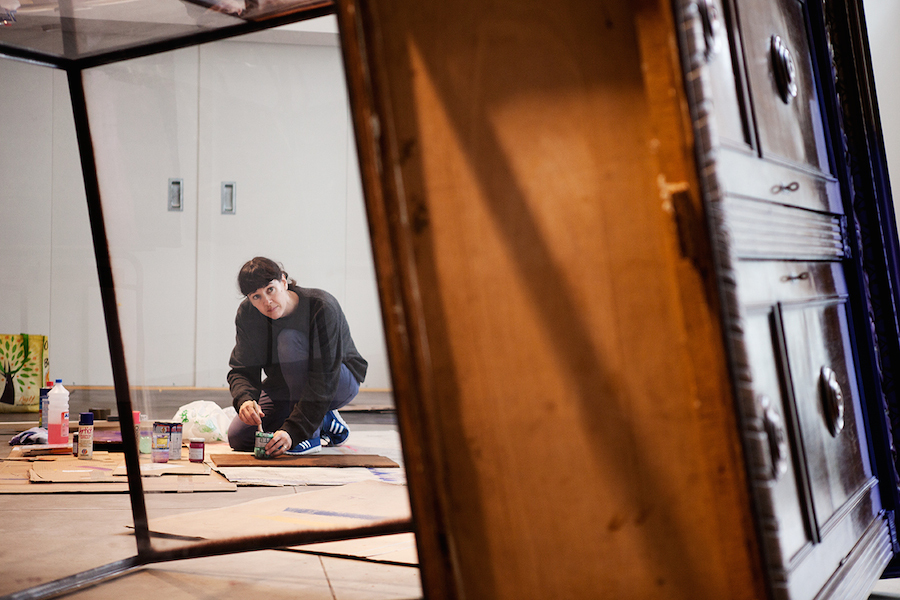 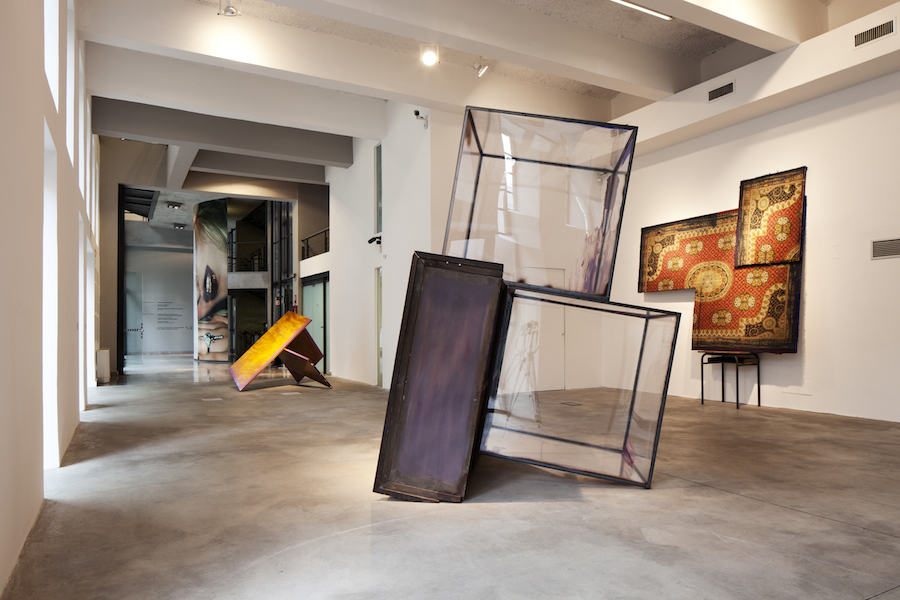 MACRO – Museo d’Arte Contemporanea Roma – and DEPART Foundation present “Lay Me Down” American artist Sarah Braman’s first solo show in Italy. Four sculptures, one of which was specially created for MACRO during her stay in Rome, use light, colour, and matter to investigate and reveal the hidden and surprising desires of our world. “Lay Me down” is made possibile thanks to a joint venture between MACRO and the Fondazione DEPART.

Braman’s sculptures are often made using an assemblage of furniture, scrap metal and sometimes abandoned car parts – the work specially produced for MACRO will be made of steel, plexiglas, found objects, and paint.
For the artist, these works’ strong tangible presence represents monuments to the people I love, to the joy and confusion I feel in being alive. Her scupltures act as a porthole to another dimension yet also appear as things among things and indeed, they do not exist as [mere] references, allusions, representations, or metaphors [but] remain in our world as themeselves, real as a table or a tree.
Through her creative action, Sarah Braman gives concrete form to states of mind and fleeting sensations, personal and collective memories, physical and poetic visions that come together somewhere between past and present, between reality and imagination. Trying to free the scupltures from a need for representation, Braman achieves a balance which while appearing precarious, turns out to be both spontaneous and stable under her ever-watchful, adaptable vision.
An instinctive, ecstatic approach to the world and to art can be seen in the artist’s own words: More love songs because I don’t know anything. Draw in the dirt. Build a shack. Build a monument! Sex me! I don’t understand the physicality of our planet. How is it possible? Color is a miracle. How do we “be free” here? Death is coming, always.
The exhibition’s title, “Lay Me Down”, appears as a sign of abandonment before the inevitability of loss. An awareness that is very much present in Braman’s work, which captures the fullness of the moment just as it is being transformed. Light and colour, the quintessential elements of sculpture, embody this desire for change, which acquires concrete poetic form in her works.
“Lay me down” is promoted by Roma Capitale, Assessorato alle Politiche Culturali e Centro Storico – Sovraintendenza ai Beni Culturali Produced and supported by the DEPART Foundation, in collaboration with MACRO Further support generously provided by Altay Scientific SpA
Sarah Braman was born in Tonawanda (New York, USA) in 1970. She currently lives and works in Amherst (Massachusetts, USA). After graduating from the Tyler School of Art in Philadelphia in 1999, she joined CANADA together with Phil Grauer, Wallace Withney, and Suzanne Butler. It was in this alternative exhibition space on the Lower East Side, Manhattan, that in 2000 she put on “Crystal Show”, her first solo display. After several exhibitions in the United States and Canada, in 2006 Braman first showed her works in Europe, in group exhibitions at the Galleri Christina Wilson in Copenhagen (Denmark) and at the Counter Gallery in London (United Kingdom). One of the most interesting emerging US artists, Sarah Braman has taken part in exhibitions of international prominence, such as the Armory Fair in New York (2009) and the Biennale in Lisbon (2010). Her works are also in important public and private collections, such as the De La Cruz Collection in Miami (USA). Her most recent exhibitions (2010) include the “Indian Summer” and “April Trip” solo shows at the Le Confort Moderne institute in Poitiers (France) and at the Museum 52 gallery in New York (USA) respectively, as well as the two-artist “Sarah Braman & Peter Alexander” exhibition at the Franklin Parrasch Gallery in New York (USA). In the same year she also took part in “The Shape of Things to Come: New Sculpture” at the London’s Saatchi Gallery (United Kingdom).
DEPART Foundation is an emerging arts organization dedicated to the development and support of contemporary artists whose work and careers are departing from their previous endeavors or predecessors.
DEPART Foundation actively supports the fields of research, artistic production, education, and acquisition, encouraging the growth of the artists through the promotion of a residency program, laboratories, symposia, and grants for research; it plays an active role in the field of urban development through architectural planning and design and cultural development through programs and initiatives aimed at the community.