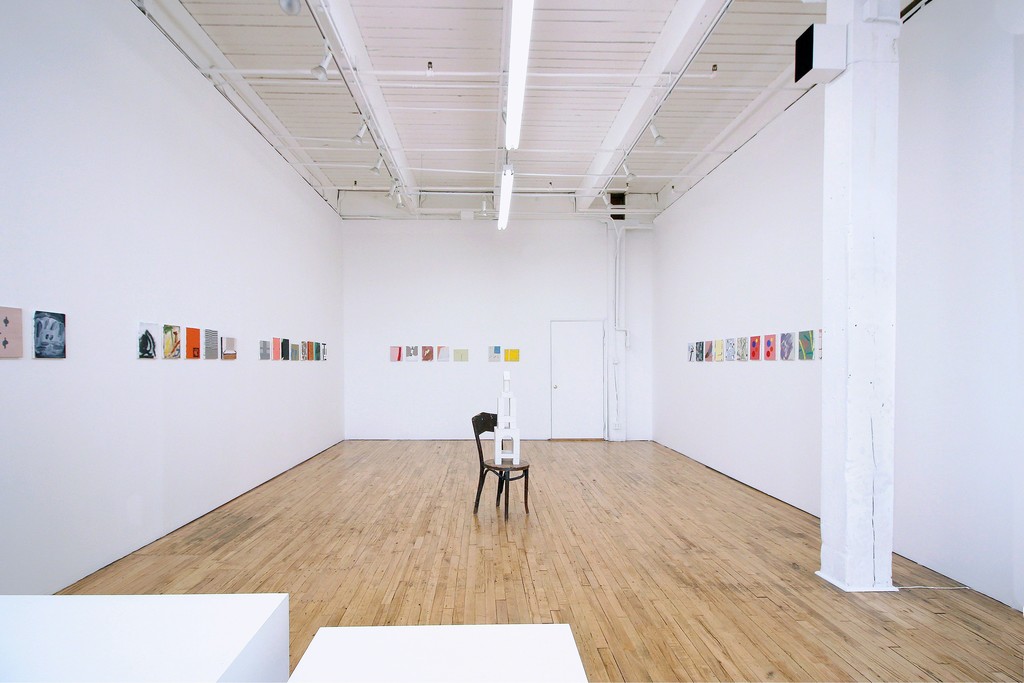 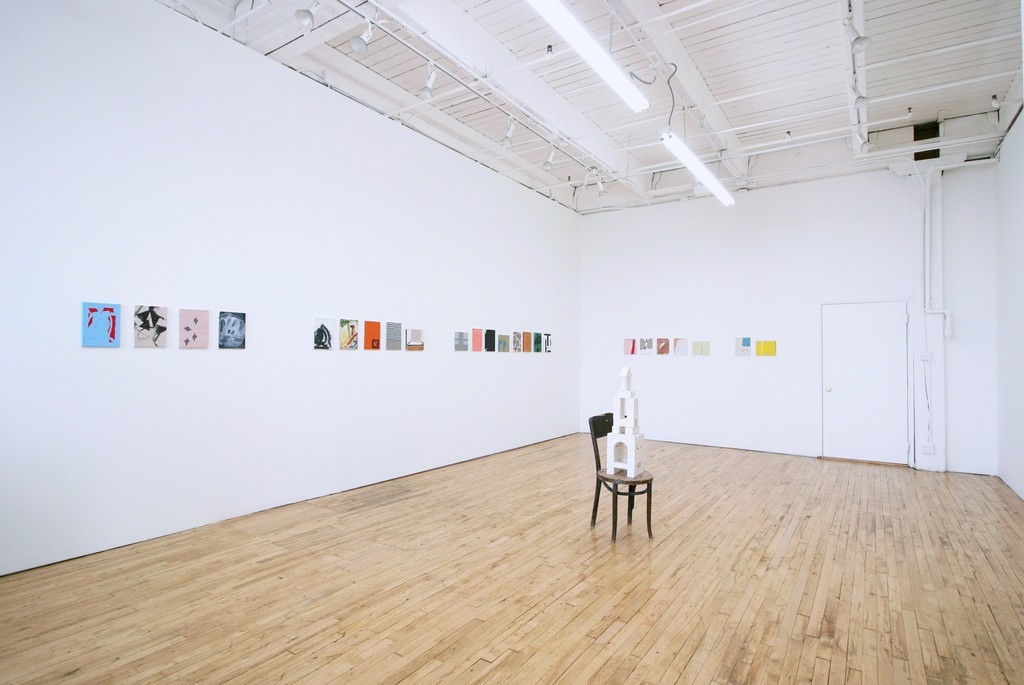 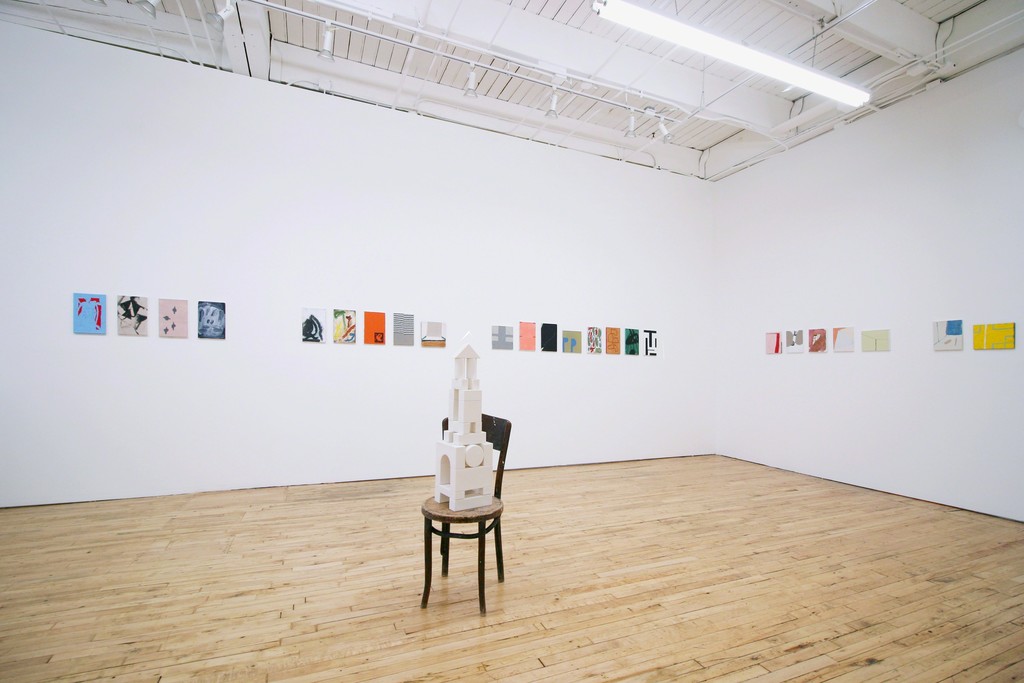 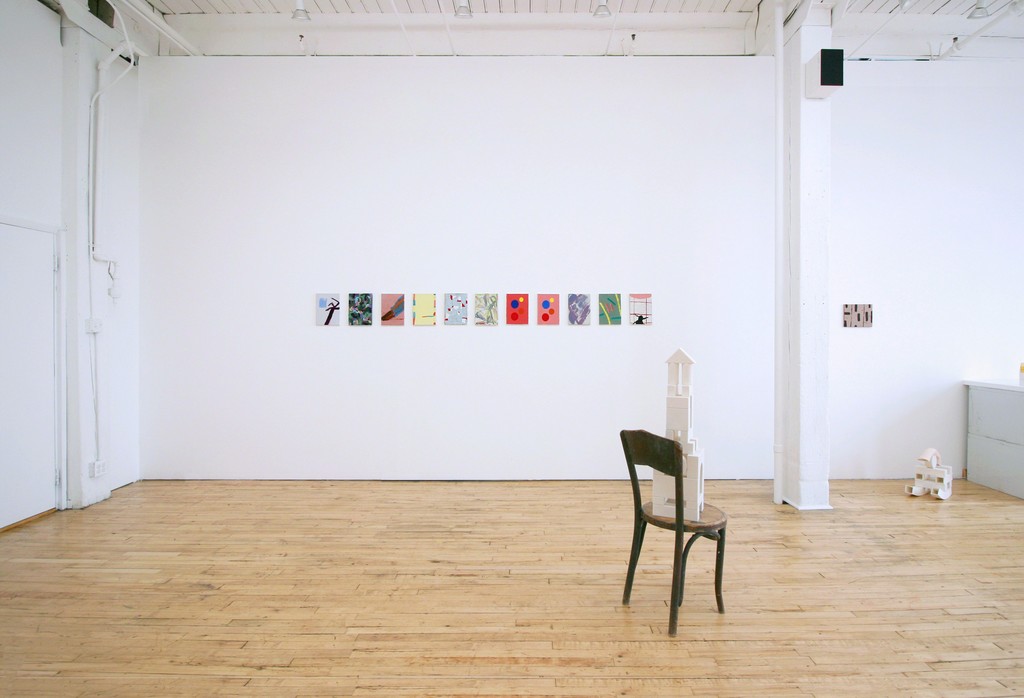 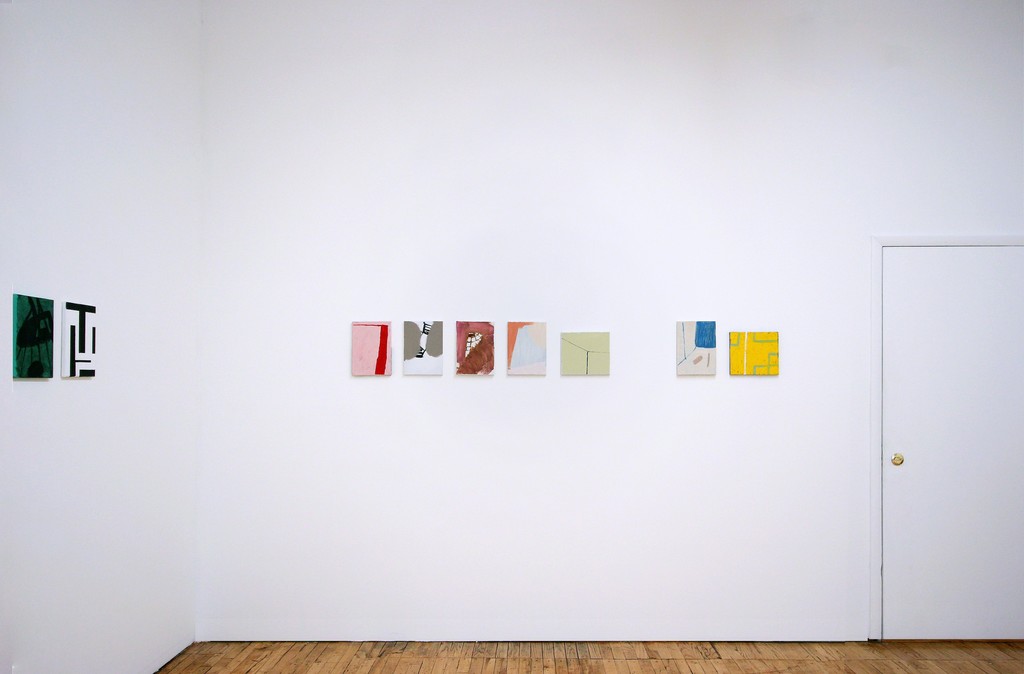 “On the day when I know all the emblems,” he asked Marco, “shall I be able to possess my empire, at last?” And the Venetian answered: “Sire, do not believe it. On that day you will be an emblem among emblems.”
— Italo Calvino, Invisible Cities

Once, when Peter Shear and I were discussing an earlier exhibition of his non-painted works at Indiana University, he offered a curious justification for his installation decisions: “I suspected a poetics.” Indeed, Shear’s small paintings at Devening Projects, on first look, might appear suspiciously simplistic. A squiggle here, a brushy wash there; where hard-edge forms profess a certain amount of confidence, their cratered, lumpy surfaces belie the self-assurance of the shape’s border. Images that might convey grandiosity painted on canvases measured in feet rather than inches instead seem to barely assert themselves, brush strokes often failing to reach the canvas edge. Shear also doesn’t seem interested in developing a specific range of pictorial inquiry—rather than tuning a handful of ideas to their sharpest tenor, he seems to move on to a novel approach each time he has the gist of the work jotted down onto canvas.

This is an important distinction. Shear’s works feel like ideas of paintings. They are certainly not studies, however: they are too closely attuned to the compositional tipping point on which they balance, too intimately aware of their own scale, too unconcerned with ambition. Rather, they work more like the half-conscious dreams you might have when you are still falling asleep, or like the uncertainty of peripheral vision. Shear is an insightful improviser, more akin to the continually inventive, blissed-out jam band than to the ear-piercing licks of rock and roll superstars. The zigzags, washes, and lumpy deposits are just ideas—sweet nothings and pillow talk—and have only just entered the first moments of form. But ideas, full of the promise of potentiality without the disappointments of actuality, can be beautiful things. Shear preserves this natal moment, one that most painters disguise.

Like any poet or painter worthy of the name, Shear understands the significance of small decisions. Even as he strives for images that compel our attention, the striving is never concealed. However, Shear’s poetics is hardly a simplified romanticism: it is bound up with suspicion. The paintings have, as he puts it, “just enough criticality,” just enough awareness. Shear’s achievement (though ‘achievement’ is too strong a word, too finalized a notion to comfortably partner with Shear’s work) is this delicate balance of poetics and suspicion. While each painting is strangely compelling, each works in a different way. This alone is a significant accomplishment, since most painters find a few mechanisms they understand and then repeat and refine them, but it is also essential to Shear’s suspect poetics. Shear maintains the open potentiality of painting in the works he presents us (for which ‘finished’ and ‘unfinished’ are hardly appropriate terms). The images may seek the status of emblems, but unlike most signs and symbols, Shear’s paintings never pretend to be anything other than made, anything other than possible. Shear titrates poetics and suspicion, beauty and criticality, completeness and incompleteness, into a delicate alchemical mixture that is continually revealing.
-Brian T. Leahy