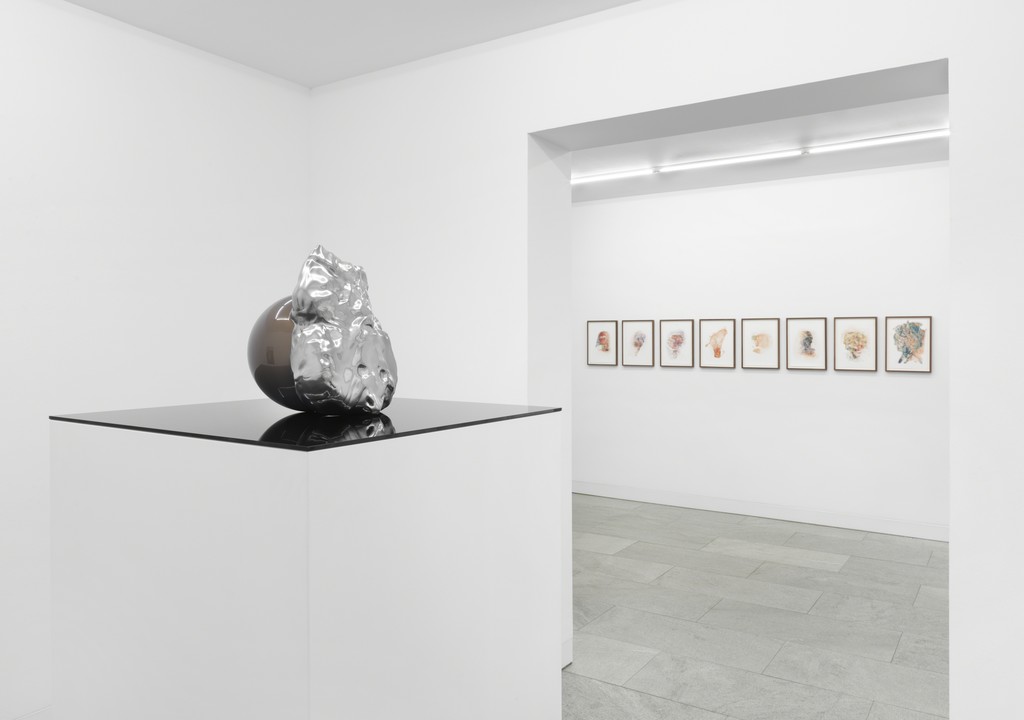 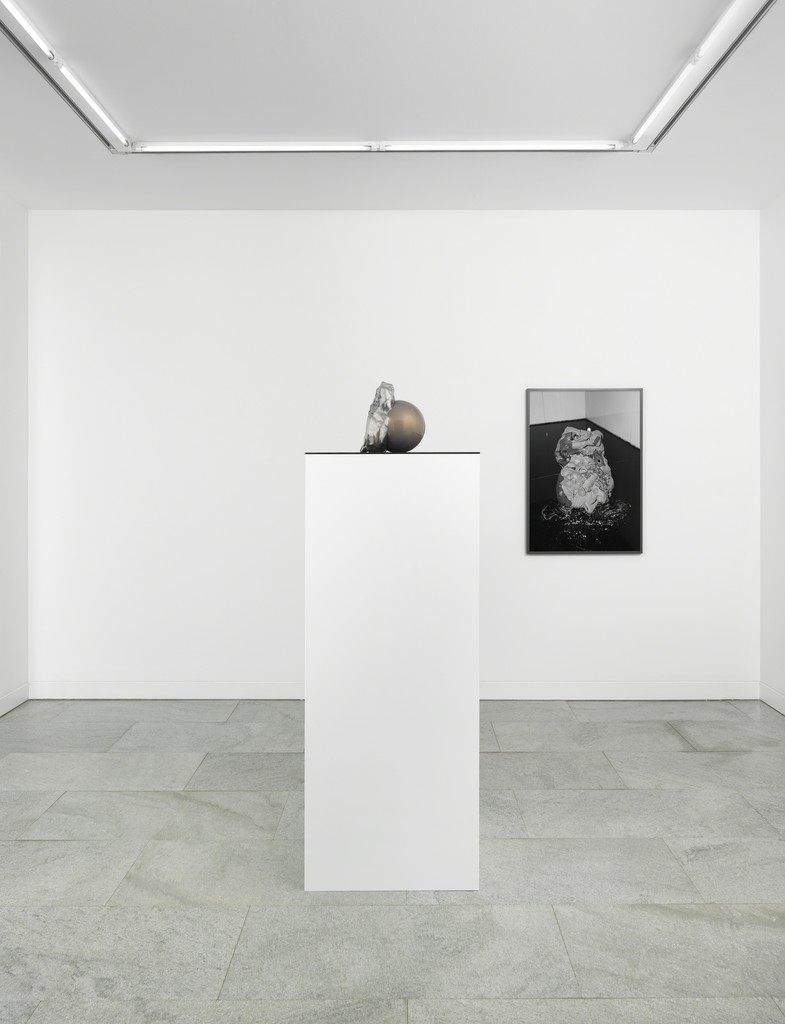 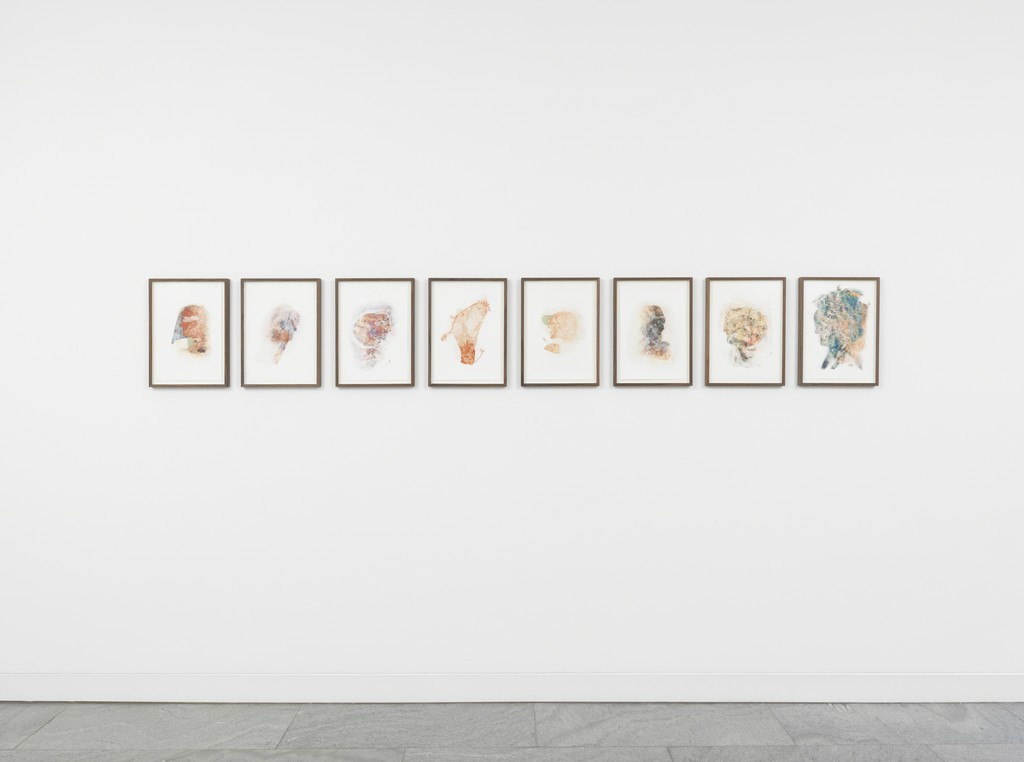 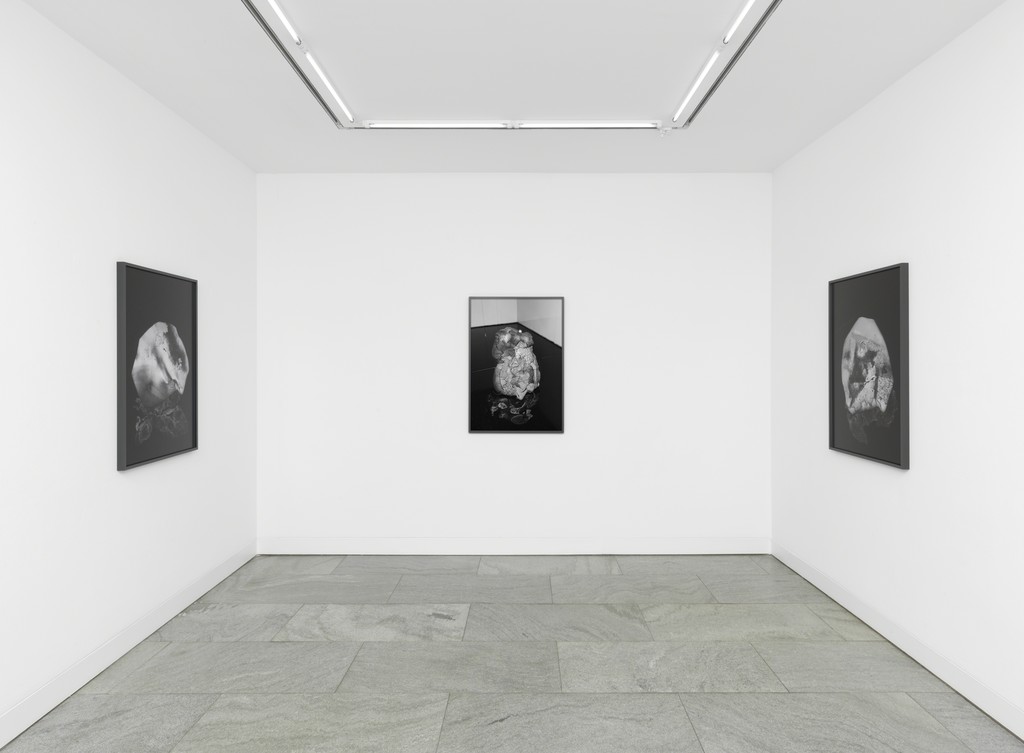 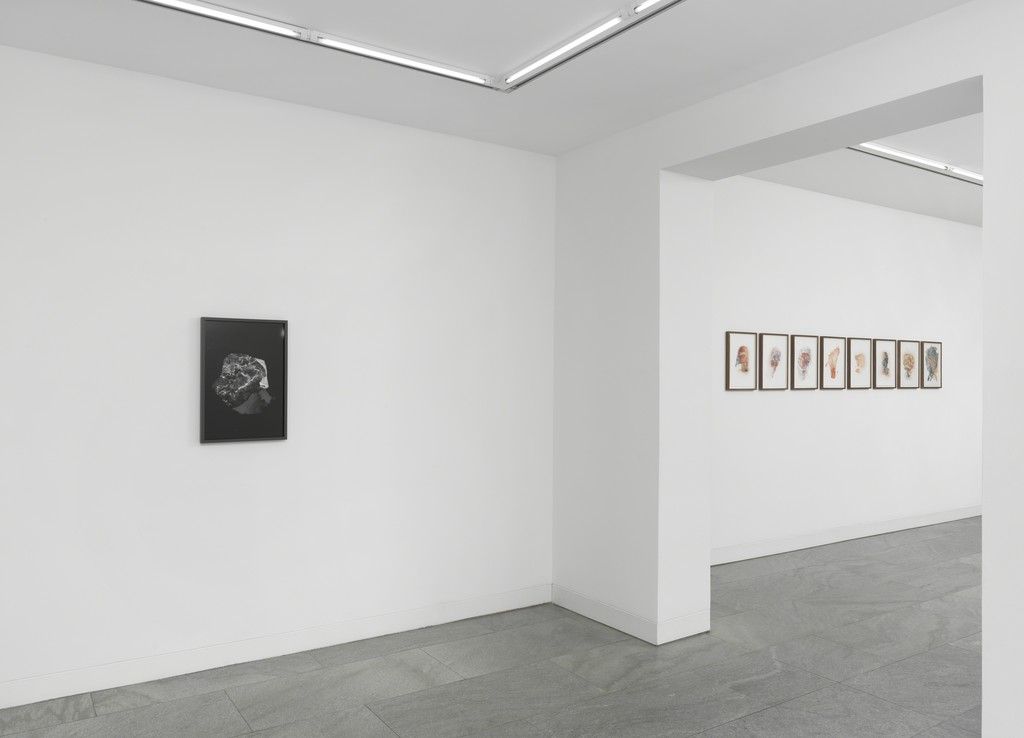 Lars Dittrich and André Schlechtriem are pleased to present DRAWINGS FROM THE HAND, the gallery’s second solo exhibition of works by the New York-based artist Asger Carlsen. In Carlsen’s art, the montage and coordinated superimposition of digital imagery engenders a brutal aesthetic that revolves around a reassessment of the graphical process and a distortion of the subject of the silhouette. In DRAWINGS FROM THE HAND, the Danish artist opens up the fictional hybrid bodies of his earlier series HESTER and WRONG to create photographic ‘objects’ that combine archaic-earthy with cosmic-immaterial overtones. DITTRICH & SCHLECHTRIEM presents these works, which are both disturbing and profoundly alluring, in three formats: 5 pigment prints of digitally synthesized photographs, 8 multilayered ‘marble drawings’ on hot press watercolor paper, and an iridescent transmorphic sculpture based on a 3-D print.

In the gallery’s first room, large-format black-and-white pigment prints feature extreme ‘objects’ on mirrored black glass surfaces. Carlsen, who works with electronic pens on tablet computers, collages self-portraits with shots of undefined materials and hones the gestural vocabulary of Photoshop image editing—as in the time-consuming process of contour softening—to Old-Masterly precision. The artist constructs a raw and amorphous materiality that blends textures resembling flesh, metal, or concrete with sometimes futuristic-looking surface structures. A former crime scene photographer for the New York Police Department, Carlsen has a trained and sensitive eye for the ways bodies appear in death and contrasts figural details such as eye sockets, noses, and ears with rough fissures and spots that might be bloodstains. Each work consists of numerous—in some instances, over two hundred—photographic sources the artist assembles step by step in an editing process that can take up to six weeks. Where the earlier series foregrounded strategies of decomposition and obscured the seams between different skin images, the new works envision a human face broken up and transformed in a utopian alteration of its physicality.

Executed in the format of 16 by 11 inches, the ‘marble drawings’ show semitransparent chromatic scenarios illuminated by a gentle light seeping in from the edges. As the artist pencils the silhouette of his own face into the pictures, the invisible gestural work of the draftsman’s hand on the computer attains material reality on the physical medium. These works, too, are composed of numerous heterogeneous visual layers, for which Carlsen uses photographs of the bathroom floor in his apartment in New York’s Chinatown. The layers of faded linoleum scarred by the passage of time recall networks of veins, maps, hematomas, or, in some cases, cross-sections of organs. In the formative interplay with these contingent patterns, the unexpected intimacy of imagery from the artist’s private space and his facial contour also invites personalized readings.

At the center of the exhibition stands a 3D photopolymer resin print of a sculpture that radiates an immaterial sheen. Scaled to match the photographic pieces, it is coated with metallic auto body paint. The asymmetric relief structure, painted in a dark silver hue and supported by a golden sphere, is an abstract rendition of the artist’s facial features. The work’s amorphous and almost virtual quality calls the status of classical sculpture in question and heightens a tendency that is already implicit in the photographic series: Carlsen’s creative efforts aim at the conception and thorough analysis of a sort of hyper-sculpture that leaves the viewer in perpetual doubt whether what she sees are analogue depictions of real objects or products of synthetic Photoshop design.

Asger Carlsen’s DRAWINGS FROM THE HAND transcends the conventional boundaries of sculpture, Photoshop editing, and classical drawing to cultivate a zone of referential in-between—objects that exist beyond the categories of idea, draft, and material implementation. The artist’s hand, previously invisible in his work, now emerges into view in a variety of registers: in concrete pencil strokes as well as indirectly, through fingerprints and traces of modeling visible in the photographed materials. The iconographic hermeticism of the earlier series gives way to an unexpected raw tactility, while the spectrum of associations broadens considerably: morgues, potter’s studios, and surfaces of comets now appear as atmospherically relevant loci of reference. The mute screams of the sealed hybrid bodies in Carlsen’s past works are transformed by the reassessed medium of drawing into the echo of a newly brutal physical reality.

DITTRICH & SCHLECHTRIEM will publish a catalogue in conjunction with the exhibition. For press inquiries and further information, please contact Owen Clements at owen(at)dittrich.schlechtriem.com.